An 86th minute winner cost Glentoran what would have been at least a deserved draw in the season’s first “Big Two” match. But while late goals proved consistently costly last season, the manner of this defeat was very different in a game where resolute defending and strong, fast forward play again demonstrated the clear improvement in the Glens and our ability to compete much more effectively with the league’s better sides this season.

Mick McDermott started with the team that beat Larne at the Oval last week, but was deprived of Jonny Frazer from the squad, as the winger was still feeling the impact of a strain against Ballyclare in midweek. 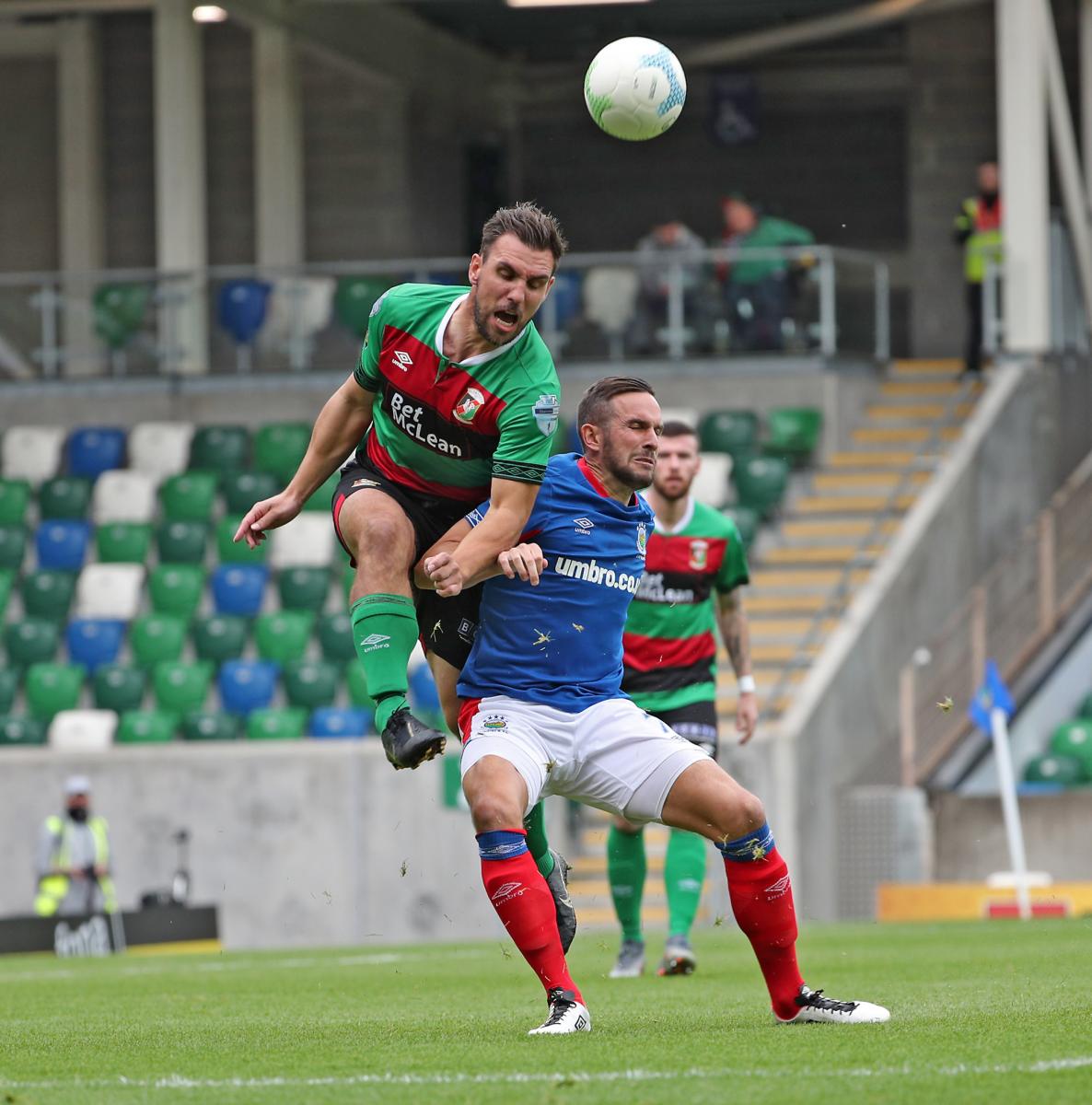 The Glens got off to a fairly bright start and our first chance came in 6 minutes when Paul O’Neill, playing on the left of a front three, shot just wide from an Elvio Van Overbeek cross. But potential disaster occurred after 14 minutes when Gavin Peers went off, feeling the effects of blocking a Linfield clearance. However, rather than reshuffle positions, Mick McDermott sent on Stevie Gordon to slot in beside Paddy McClean in the centre back position he played so well recently against Ballyclare in the League Cup. This proved a great move as Stevie had an outstanding game in a back four that seemed impenetrable for virtually the whole game.

Immediately after this, Joe Crowe was booked for a professional foul on Shayne Lavery, but was spared a red as Paddy McClean was clearly covering beyond both players. The Blues first big chance came next when Bastien Hery shot just over from a Kirk Millar corner. John Herron then wasted a good break at the end of a first fifteen minutes just shaded by the Glens. 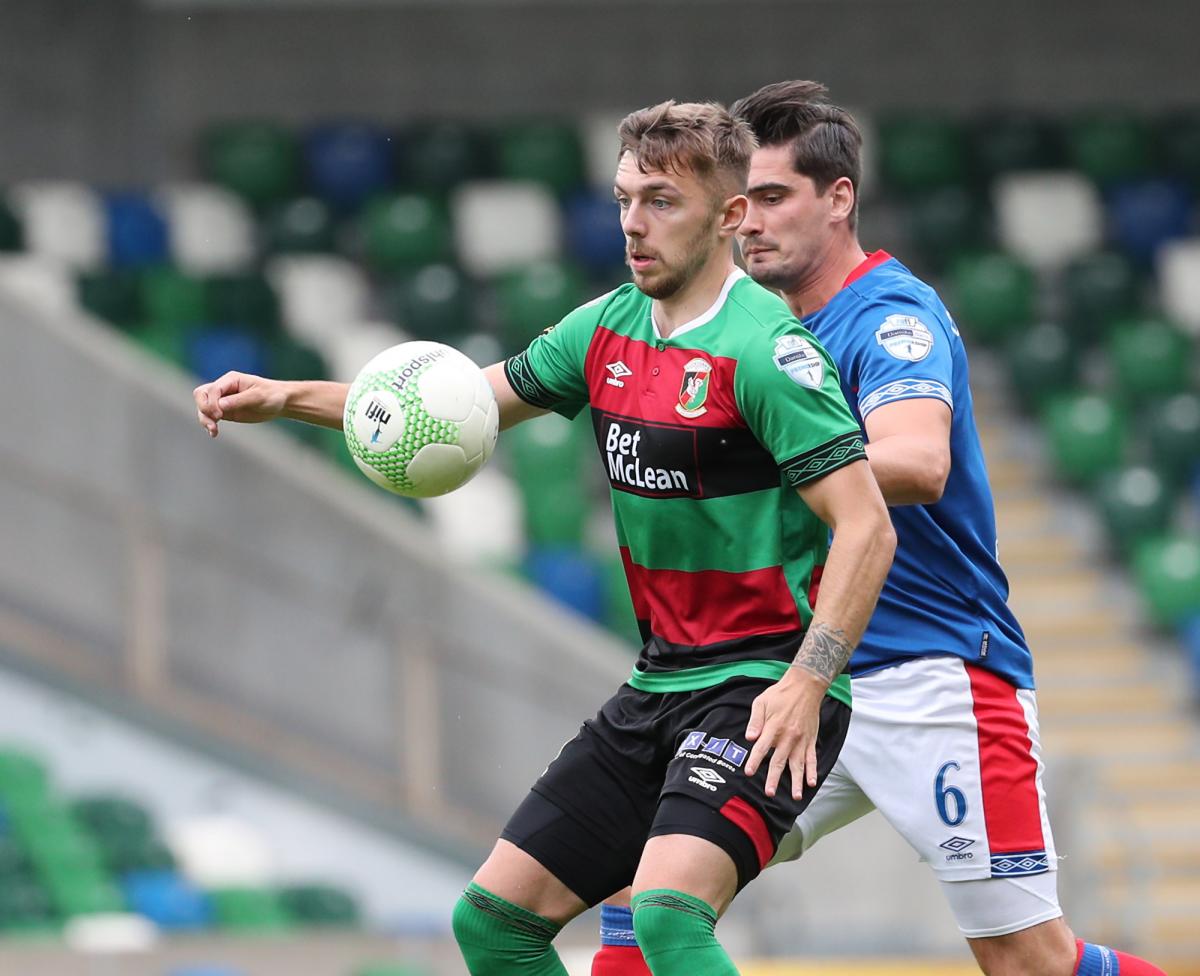 The Blues came much more into it for the rest of the first half although the Glens defence never looked uncomfortable at any stage. Conor Pepper in particular was outstanding as he repeatedly stifled any threat from Joel Cooper, a player who has done plenty of damage against Glentoran in the past few years!

In 34 minutes Marijan Antolovic – who had a very secure ninety minutes – made a good save from a header from a Blues free kick. But the best chance of the half came two minutes before the break when Elvio Van Overbeek just failed to get a close range shot away after excellent work from McDaid. Immediately afterwards a long range shot from Joe Crowe went just wide. 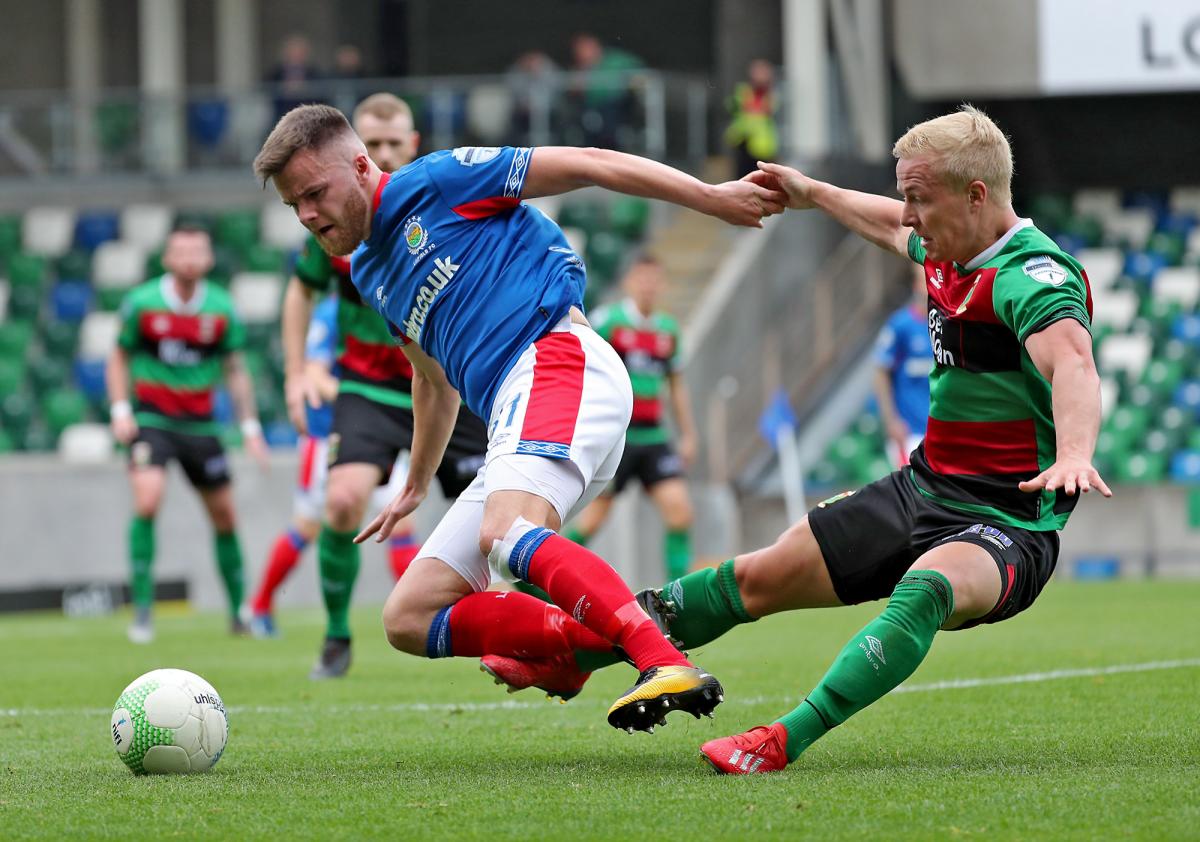 The second half started quietly with just a couple of yellow cards – for Niall Quinn and Robbie McDaid – as incidents. Then on 54 minutes the Glens attack was too slow to react as the ball bounced around the Linfield area following a typically incisive free kick from Hrvoje Plum that wasn’t dealt with by the Linfield defence. Mark Stafford was then booked for a cynical foul on Robbie McDaid. Ten minutes later Stevie Gordon was booked for a pull on Lavery. This was an utterly baffling booking as the ref then belatedly awarded a throw in to the Glens! 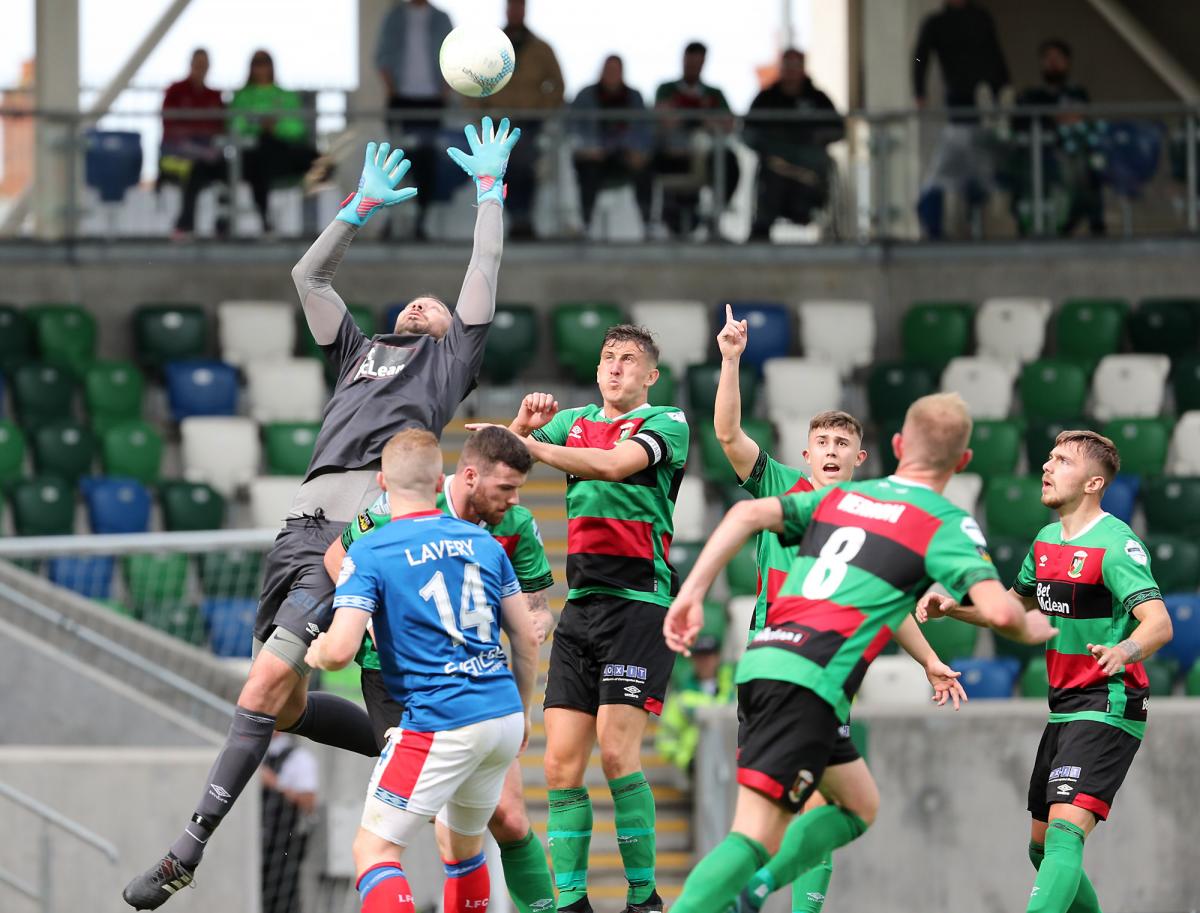 In the seventieth minute Plum had a great solo run though the Blues’ midfield but wasn’t able to find his man. At this stage the game was still very even, and it was increasingly looking as if one goal could win it for either team. That goal should have come on 74 minutes when a typically accurate Van Overbeek cross found Robbie McDaid on the Blues’ six-yard line. Robbie’s firm header came back off the crossbar and from the rebound, John Herron nodded across the box, trying to find Paul O’Neill, rather than heading back towards goal. This was something of a turning point. 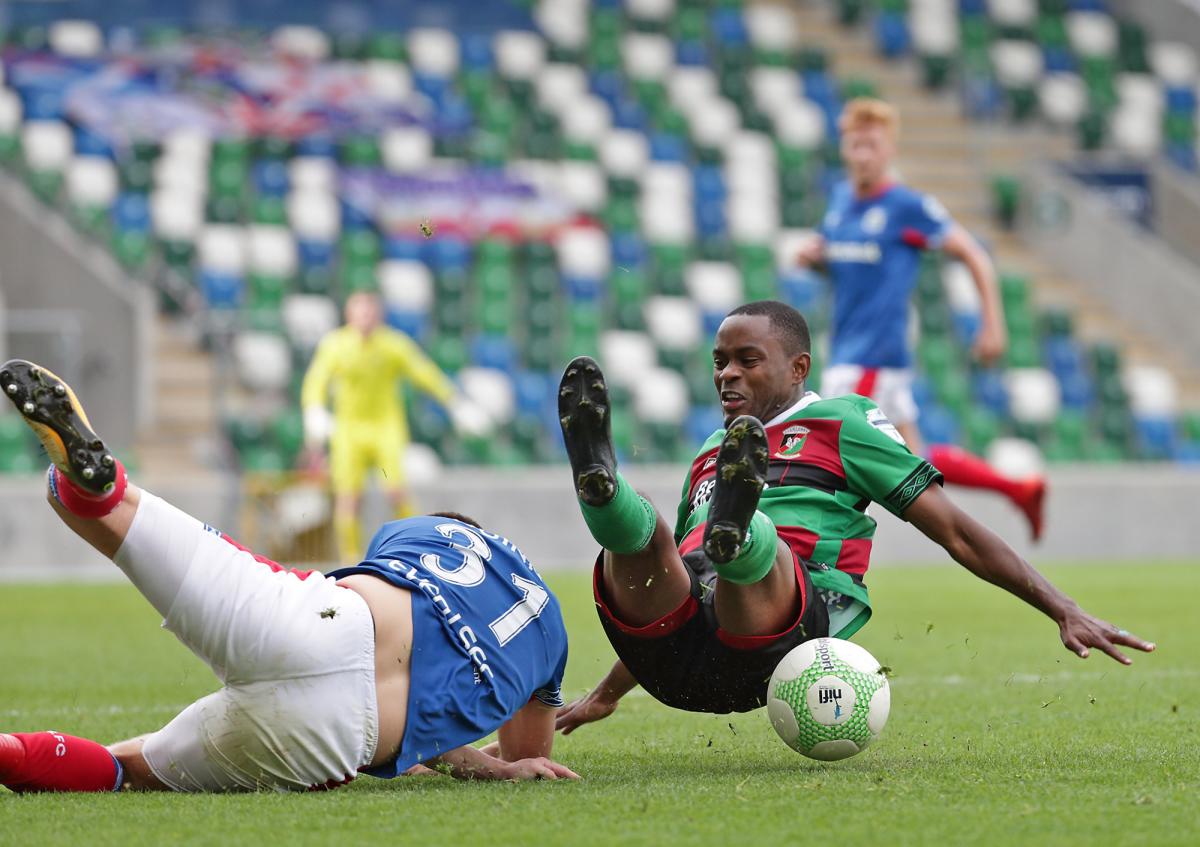 The winning goal came on 86 minutes. Bastien Hery – who had been kept relatively quiet – got the ball from a throw in wide left. He then evaded challenges from Van Overbeek, Plum and Crowe to get the ball into the box where Kirk Millar was able to get a deflected shot away, past the unsighted Antolovic.

All in all, an undeserved and disappointing defeat, but certainly not a performance deserving of much criticism and one on which we can build in the weeks to come. 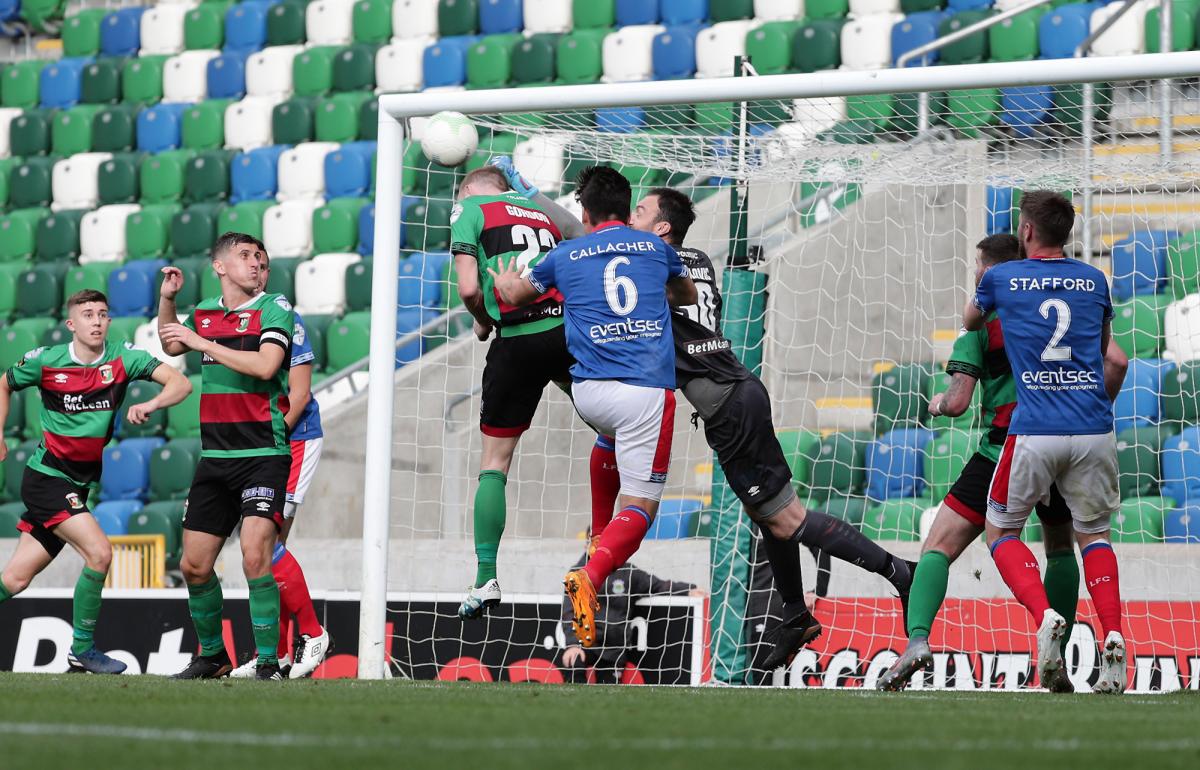 Certainly, the huge Glentoran travelling support were disappointed with the result, but their warm, loud applause for the team and coaching staff at the final whistle indicated a renewed optimism among Glenmen and women this season.

Head Coach Mick McDermott said of the support: ““I want to personally thank the fans that came in great numbers to Windsor on Saturday. You were a credit to our great Club.
We strive to take our Club forward and we work each day to make it happen. 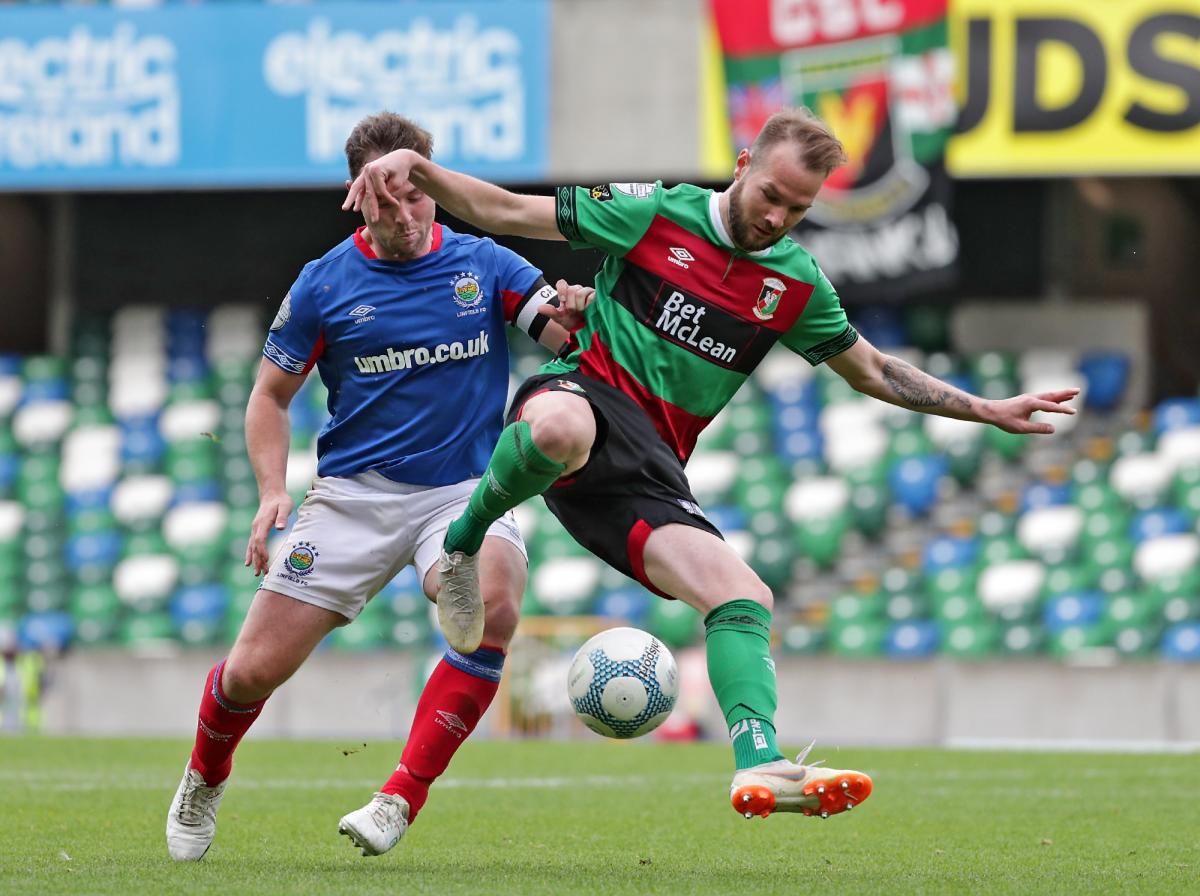 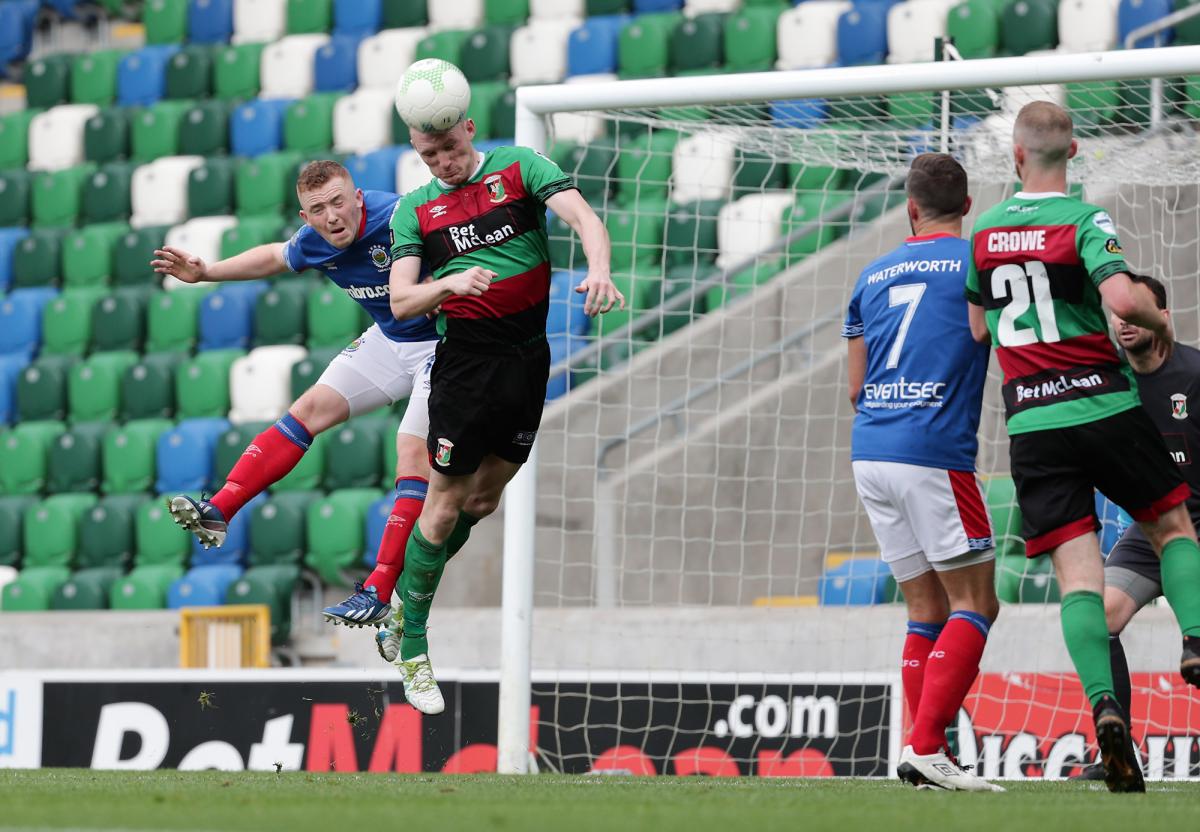 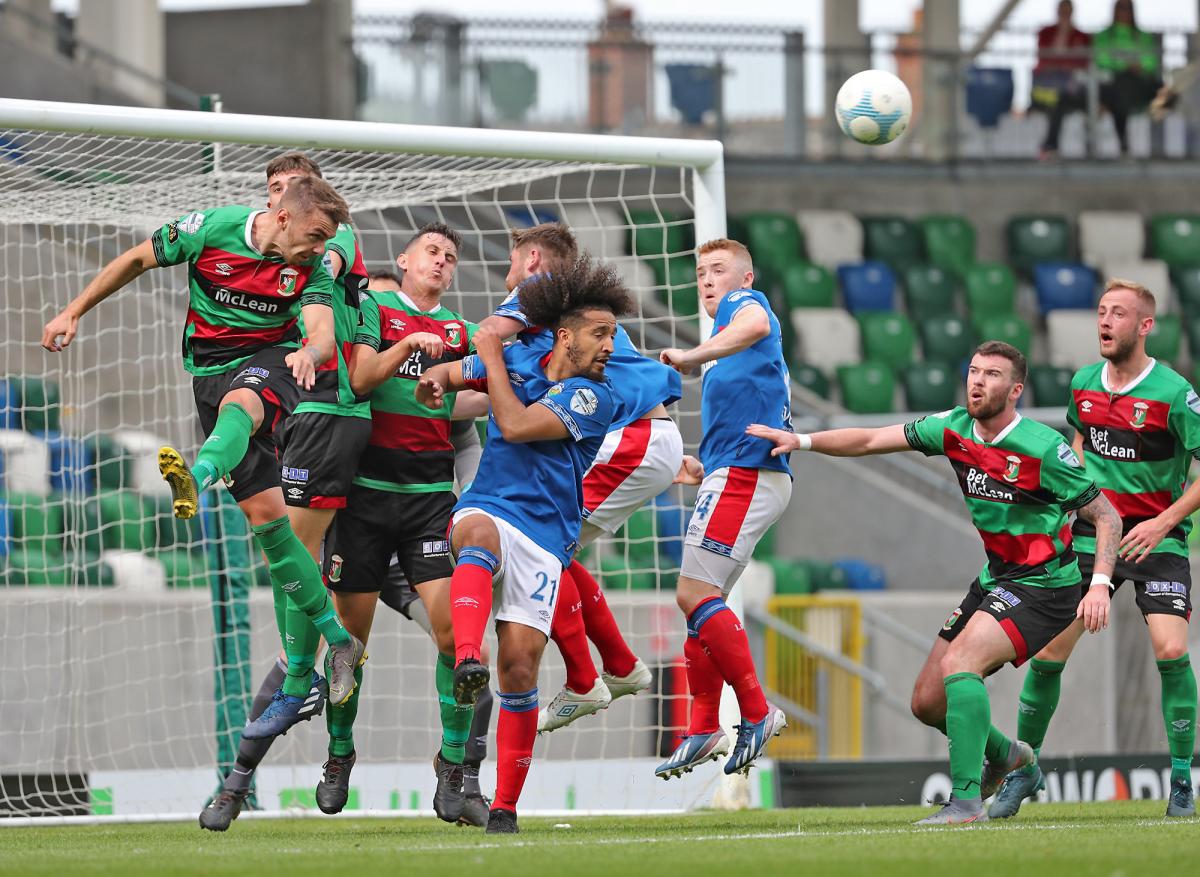