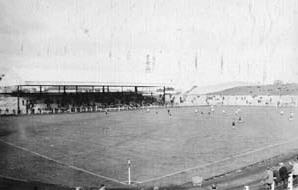 Sir Daniel Dixon was a colossus in Belfast Society in the last decade of the nineteenth century. A property developer, a factory owner and a driving force behind the railway link between Belfast and Bangor. He was also a Conservative politician who would serve as Lord Mayor of Belfast on no less than four separate occasions. In actual fact he was the first Lord Mayor of Belfast in 1892. Dixon lived initially at a house called Dunderave in Strandtown before relocating to the palatial splendour of the hills around Holywood at Ballymenoch.

Significantly though, it would seem that Sir Daniel Dixon was a Glenman. He realised the benefit a successful football club would bring to the people of East Belfast and supported its cause. The pressure was on Glentoran to find somewhere bigger to accommodate the thousands wanting to see them play. Dixon owned quite a considerable portion of Ballymacarrett including a vast amount of wasteland which bordered Conn’s Water (as it was known at the turn of the century) and along the side of the Belfast to Bangor railway line, right across to the edge of Chelsea Street (which in 1902 had only houses on one side). Glentoran moved to the site of the original Oval which was on Dixon’s land in 1892 from the Westbourne area of the Newtownards Road. At the club’s headquarters on My Lady’s Road the secretary. 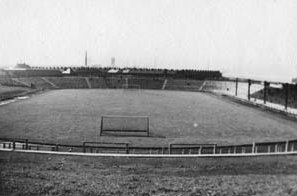 T.D Reid organised the formation of the club into a Limited Company primarily to give the workers in the shipyard the opportunity to invest in theirclub. Other prominent figures in “Society Belfast” invested heavily in the newly structured set up as well. Amongst their number were both Viscount Pirrie and G.W. Wolff. Pirrie though born in Canada had been educated in R.B.A.I. before entering Harland and Wolff as a gentleman apprentice in 1862. Twelve years later he was made a partner in the firm and by 1895 he was the chairman of the Yard. Wolff had been the co-founder of the Harland and Wolff shipyard in 1862 before becoming MP for East Belfast in 1895. The East had a constituency of 135,000 people at the time so the support for Glentoran FC was potentially massive. Both Pirrie and Wolff invested the huge amount of £400 in the club at the turn of century and at the same time Dixon indicated that there was more land available to lease adjacent to the ground that the Glens were using between Chelsea Street and Mersey Street.

Captain James Craig, not long returned from the Boer War (in which he had been injured) also made a financial contribution to the acquisition of the Oval. Don’t get the wrong impression though, the land that Glentoran had both been playing on at Mersey Street before 1902/03 and after on the new site, was a barren, desolate landscape which was bleak and uninviting. Dixon agreed the long term lease of the land and with the money provided by shareholders and men such as Pirrie, Wolff and Craig, Glentoran set about turning a wilderness into a football club. On the 18th May 1903 The Belfast Evening Telegraph ran with the headline that “Glentoran’s new ground, complete with new playing surface is ready”. 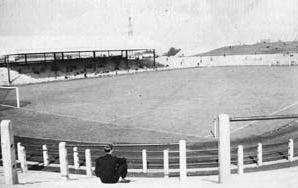 By the time the Ordnance survey maps for 1919 were released the Oval had been completely transformed and rotated in the position it is in today. In actual fact if you look at the letters M.P. on the railway line on the maps they stand for a “mile posts” which wouldn’t have changed in the years between surveys. Going by that fixed point, the Oval moved quite a considerable distance. It is fair to say that the old Oval was positioned where the “Redcliffe” series of streets would stand in later years.

No longer was the pavilion accessible from Armitage Street. The pitch would now run parallel to the railway line. The unreserved stand and pavilion though, were located roughly were they remain today. Dressing rooms, offices, a cycling track and a cinder track were added. The track facility hosted the British Empire Championships and in 1904 the Glens organised a Trades football competition which unearthed a wealth of talent amongst the different shipyard trades. Through this revolutionary scouting exercise the club unearthed legendary Glentoran players such as English McConnell and Paddy McCann.

Further improvements were deemed necessary at the new Oval as crowds continued to grow. A carnival was organised to fund the plans and held in the grounds of the Princess Picture Palace on the Newtownards Road and the required monies were raised immediately. 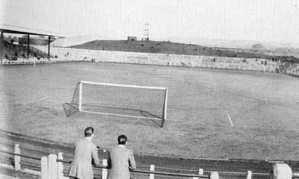 The long standing relationship with the Dixon family would remain in place for another 56 years. In 1939 Sir Daniel Dixon’s son Herbert Dixon was awarded the title of Baronet. In a tribute to the connection between the family and the club, Dixon chose the title Baron Glentoran of Ballyoly County Down. In recognition of the title that he selected, the club would wear Lord Glentoran’s Coat of Arms on their team shirt for the duration the war years. The Glentoran lineage continues today with Robin the 3rd Baron, Lord Glentoran,

In January 1960, a forward thinking board of directors made the decision to purchase the Oval from Dixon Estates, by now a large insurance company.

The sum? Well back then, the ground that the Glens play on today was bought for £4,250. To their credit the Dixon family stuck by the club throughout the war years when the ground had become a flattened ruin. With housing being in such short supply in the Forties and Fifties it would have been easy to re-develop the site.

The Oval was officially opened on the 29th August 1903 in a game between Glentoran and the King’s Own Scottish Borderers. It was a hard fought contest played in front of a packed house. Glentoran won the game 3-0 with goals from Harvey, Waddington and Ewing.

But it wasn’t any of the Glentoran side who kicked the very first ball on the now hallowed Oval turf. The honour was bestowed on a gentleman whom you are bound to pass on a regular basis when travelling through Belfast.. The next time you stroll past City Hall doff your hat in recognition to the man who stands proudly at the front of the imposing edifice. For it was Sir Daniel Dixon, the Lord Mayor of Belfast in 1903 who was given the honour of kicking off that very first match at the stadium, a man of insight forever captured in bronze as one of the City’s founding fathers and another whose vision forged the future of Glentoran Football Club in the years that followed.