As the club climbs from a decade of relative underachievement on the pitch, one thing the Glens support will look back on that period with pride and affection is the fact that through the work of GlensTV. Through match highlights of both the first team and Glentoran Women, exclusive interviews with key club personnel and various other initiatives through the club website and social media channels, Glenmen and Glenwomen can confidently say we have the strongest club media channel in Northern Ireland. So, there’s no better time than Glens TV’s fifth birthday to give an insight into what goes into bringing you this unrivalled coverage from a YouTube channel that just this week passed the 2,000-subscriber mark.

GlensTV was launched on 1st November 2014, with the backing of the Internet Glentoran Supporters Club and since that date the team has worked endless hours following the team home and away. It was established by David Kerr and Aaron Agnew and is currently primarily down to David as Aaron continues with his considerable efforts with our top-class graphics. 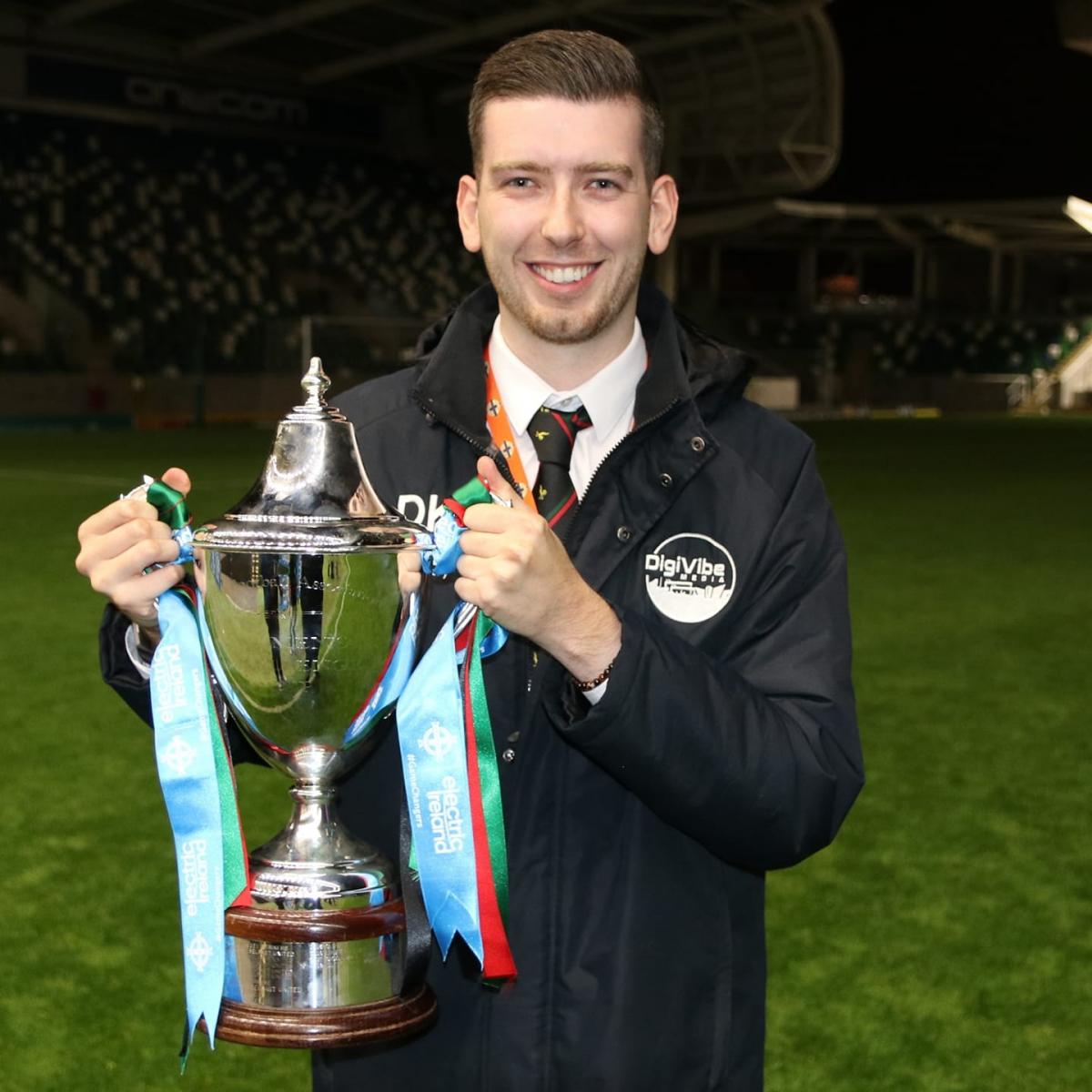 David edits the footage as soon as possible after matches, often devoting four or five hours to ensure all the important incidents in that day’s match are fully covered and, if appropriate, replayed.  In the early days of GlensTV  there were logistical problems in terms of filming at a number of away grounds, but in recent seasons these have diminished as David has become a well-known and popular figure around the league and universally recognised as a core member of the Glentoran matchday team..

It’s vital wherever possible that new signings, extended contracts, are announced through the club’s own media channels with as much fanfare and professionalism as possible. It’s also the media team’s objective to include interviews with manager and player alongside the announcements. This year, more than ever, David has recorded post-match interviews with Mick or Paul or an outstanding player from the match. Also, David ensures that major events around the club, such as the kit launch, new performance centre, stadium improvements and Bertie Wright’s 100th birthday last week. Also, we’re nearly at the point where GlensTV gives its extensive coverage of the Glentoran Christmas Appeal for the homeless. Another innovation has been the introduction of GIFs on the club Twitter feed of each player for when they score.

Immediately after each match David provides Mick McDermott with a copy of his coverage. for analysis and scrutiny. Anyone who has occasion to visit Mick’s office on a weekday will see how diligently and thoroughly this is used by the coaching staff. 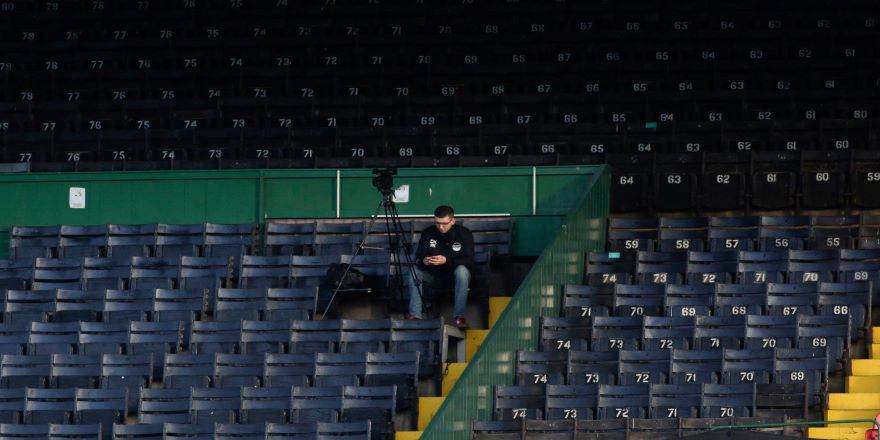 David said of his role in an interview with the Glentoran Gazette: “I guess the main reason I do it is my love for Glentoran Football Club I love everything about it, from the smell of smoke in the match day air to the unparalleled rich history of the club. When I notice the green structure amongst the East Belfast skyline it still warms my heart, you realise it is much, much more than a football club. It epitomises East Belfast and screams pure and absolute footballing heritage. From no age I’ve always wanted to be involved within the club in some shape or form. From starting the Glentoran Fancast briefly a few years back to now co-running GlensTV, I’m always attempting to find new ways to help out. I’d encourage anyone to help in and around the club. I for one had absolutely zero experience of camera work or video editing before GlensTV so, whether you can be the best tea maker, the best PA announcer or the even the best painter get involved and never underestimate your ability to make someone else’s life better even if you never know it. Glentoran is my Graceland and The Oval is my Mecca now and forever”.

David is also a key member of the Glentoran Media Team along with Media Director Ian Clarke, Webmaster Jordan Forsythe, Photographer Joe Burns and Social Media operators Owen Atkinson and Craig McCullagh and plays a very active role in keeping the clubs Twitter feed (17,000 followers), Facebook page (15,000 likes) and Instagram platform (6,000 followers) up there as the best in the province. 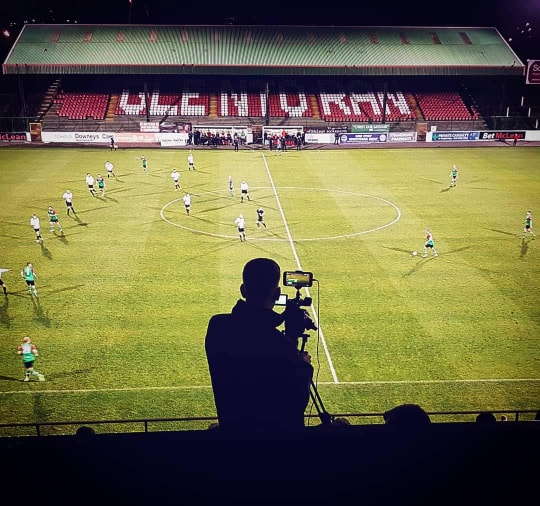 Outside Glentoran David and Aaron have started their own video production company called DigiVibe Media. They offer a wide range of video and photographic services, from a simple promotional/highlight video to a full documentary including drone shots about a business or event.  In four years, they have worked with various heavyweights across Northern Ireland such as the IFA, NIFL, MHD Promotions and Sky Sports. DigiVibe media has had a particular highlight in their work with the SBYFL (South Belfast Youth Football League). In little over 4 months the guys have created the largest sole youth football channel in the UK with over 3,500 subscribers and over 900,000 views! Along with GlensTV, SBYFL TV has really opened up another new avenue for David and Aaron to work with clubs across Northern Ireland on a weekly basis. 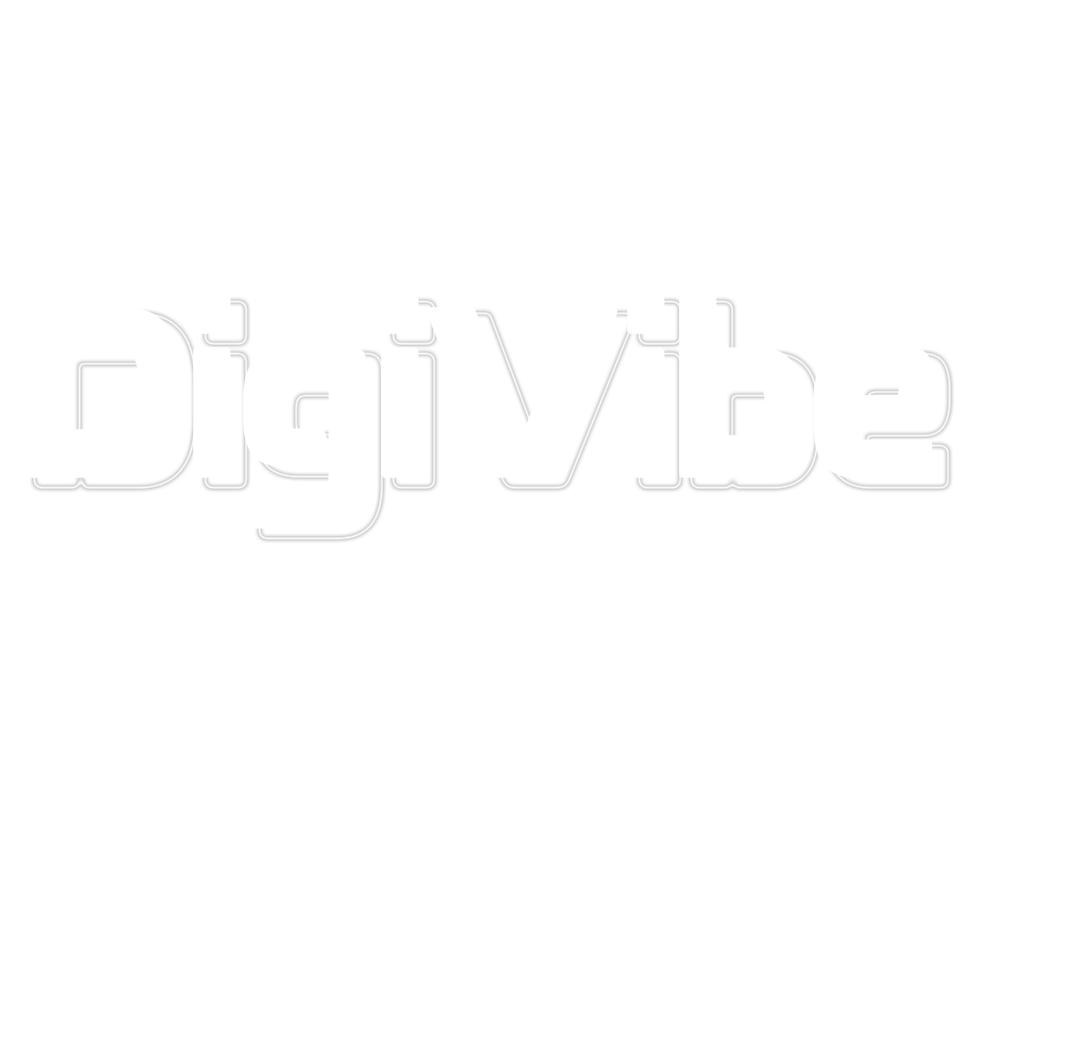