Glentoran made it six wins in seven Danske Bank Premiership games with an emphatic 6-1 win against Dungannon Swifts at the Oval this afternoon. The last time the two teams met, at Stangmore Park in August, the Glens were on the wrong end of a 3-1 score line in what was probably our worst performance of the season. Today was different and although we hit 6 goals you feel that there is still more to come from this side. 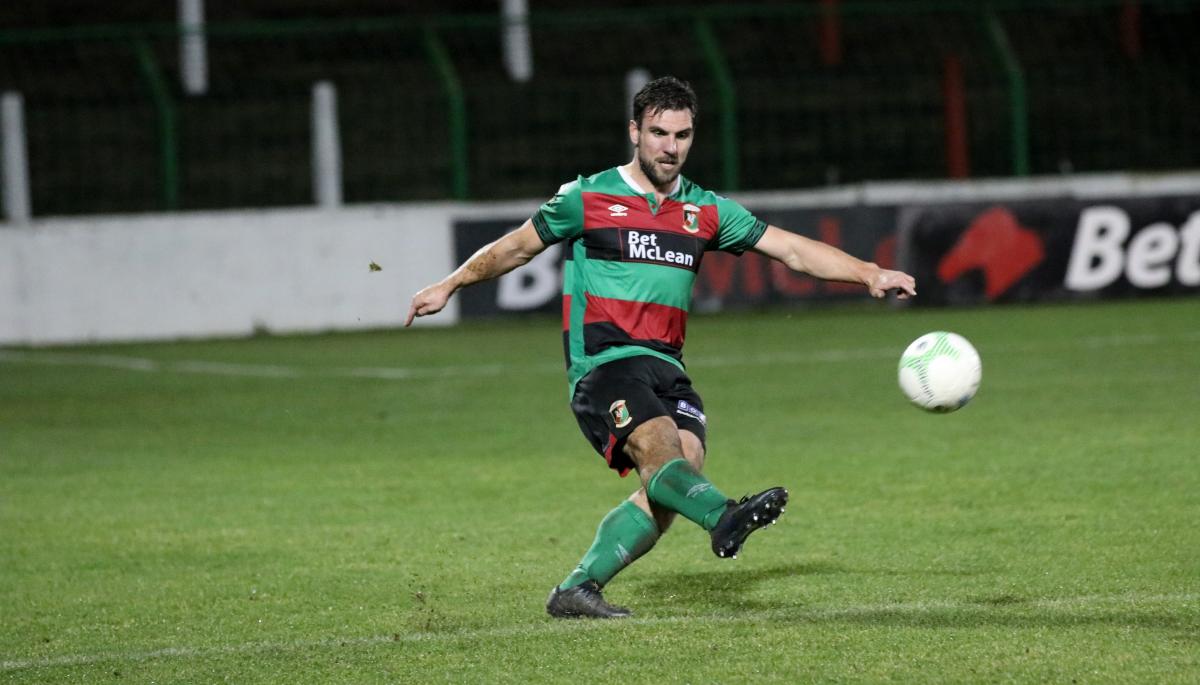 The goals were scored by Robbie McDaid (3), Paul O'Neill (2) and Hrvoje Plum, but much of the credit for what went on today must go to our groundsman, William Kirkwood. With all the rain this week, and particularly overnight, supporters feared we'd face a postponement. Without William's hard work there would have been no game. His contribution to Glentoran is immeasurable. Glentoran were two up with just nine minutes played. A long throw in from Connor Pepper was only partially cleared. Navid Nasseri and then Elvio Van Overbeek then tried to play the ball back into the danger area. It broke eventually to Robbie McDaid and he fed Gavin Peers. Peers saw his shot blocked by Addis in the visitors' goal but Robbie McDaid was there to fire a left foot shot home from eight yards. Three minutes later McDaid scored again. A sublime pass from Navid Nasseri was controlled by McDaid and the Glentoran number 11 lifted the ball over the advancing keeper to make it 2-nil. Dungannon Swifts pulled a goal back just before the quarter hour mark. Paddy McClean's clearing header fell to Kris Lowe on the edge of the area and although he went down under a challenge from Plum, Ben Gallagher was on hand to shoot past Marijan Antolovic. Marcus Kane fired wide from twenty yards in the 24th minute and then an excellent ball from Chris Gallagher seemed to have set up another opportunity for McDaid but the ball skipped away from him on the wet surface. Twenty nine minutes and Elvio Van Overbeek found Robbie McDaid. He set up Navid Nasseri and his effort on goal brought an excellent save out of Stuart Addis. Nasseri brought another fine stop out of the Swifts' keeper on 34 minutes, Nasseri's low drive seemed to be creeping inside the post before Addis intervened and turned the ball around the upright. In first half stoppage time great tenacity from O'Neill and Nasseri won the Glens a corner. Hrvoje Plum's set piece was brilliantly turned towards goal by Marcus Kane but the skipper was unlucky to see the ball come back off the crossbar, Van Overbeek firing the rebound wide. Having curled an effort wide in the opening minutes of the second half, Hrvoje Plum had another opportunity on 55 minutes when Glentoran were awarded a free kick 30 yards from goal following a foul on Paul O'Neill. Plum's effort was hit well and on target but Addis did really well to tip the ball over for a corner. Just after the hour mark the deserved third goal arrived. A corner taken quickly by Plum to Nasseri saw the number 19 drill a cross into the six-yard box. McDaid's backheeled attempt hit Addis though and the ball was hacked clear. The impressive Chris Gallagher picked the ball up though and found Gavin Peers on the right and his pinpoint cross was headed home by Paul O'Neill. Midway through the half the Glens virtually wrapped up the points with a fourth goal. Substitute Jonny Frazer won possession and having got into the box he skipped past the last defender and looked set to score. Addis made a great block though but the ball broke straight to Paul O'Neill and the young striker drove the ball low into the corner of the net.

Three minutes later good link up play saw Frazer find O'Neill. The ball should have been returned to Frazer but O'Neill, looking for his hattrick, opted to shoot; unsuccessfully. O'Neill had another shot on 79 minutes. It too was blocked but when the ball fell to Robbie McDaid his effort hit a Swifts defender and referee Gregg awarded the home side a penalty. It was perhaps harsh but McDaid wasn't complaining and he slotted the spot kick into the bottom corner to make it 5-1 and complete his hattrick. The best of the goals though came two minutes from time. Hrvoje Plum was fouled around 28 yards from goal. The game went on and then O'Neill was taken down right on the 18-yard line. Referee Gregg opted to go back to the first infringement though and Plum had the chance with another set piece. We all know the drill by now.....Hrvoje, right foot, top corner, keeper grasping at thin air, and yes he did it again. Never mind 'Bend it like Beckham' - 'Hammer it like Hrvoje'; 6-1 and job done. After the frustrating draw at Institute and the disappointment of the narrow defeat at Cliftonville it was great to get a morale boosting win. Another next week at Solitude would be even better.