It's difficult to know where to start with this one. Coming just 48 hours after the superb 3-nil Boxing Day win over Linfield and with a significant number of changes to the starting line up we then endured 85 minutes of nothingness. Indeed with just 5 minutes remaining it looked like it was going to be very much a case of 'After the Lord Mayor's Show'.....and a missed opportunity. The time after 85 minutes though was far from dull! 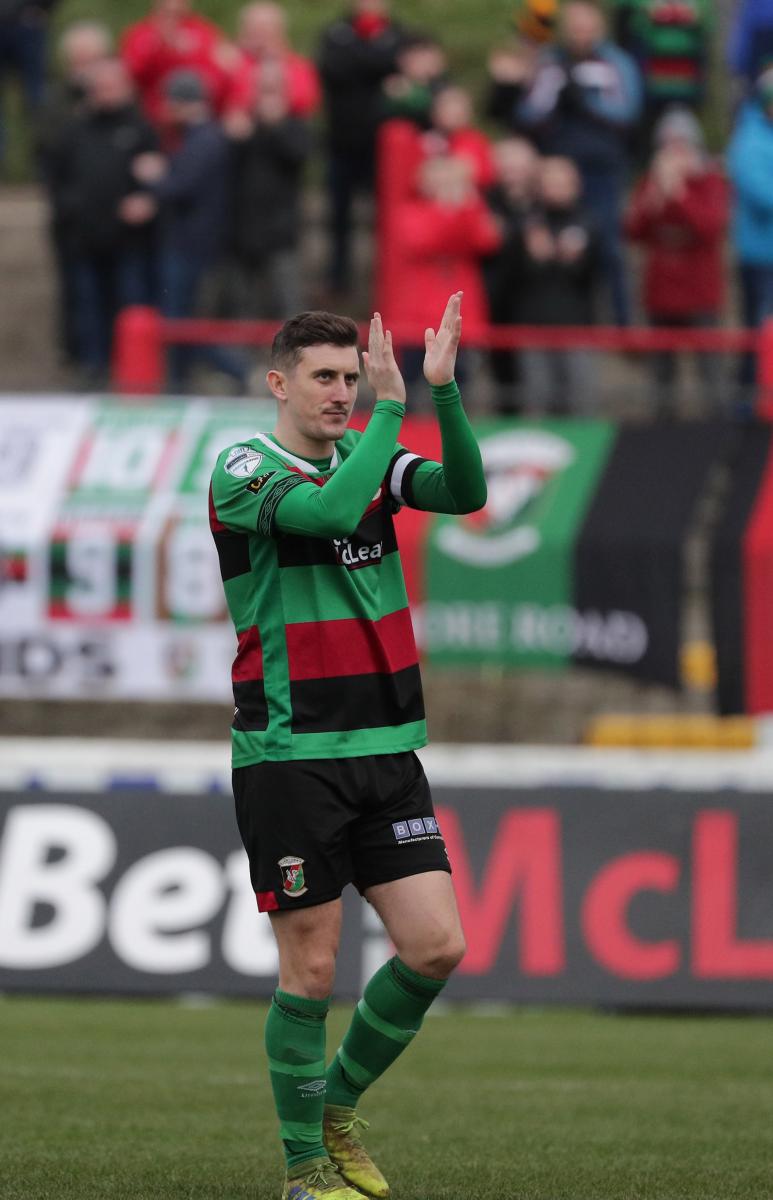 The day began with the return of skipper Marcus Kane; an emotional moment for both him and the entire Glentoran family. As the teams were read out there was spontaneous applause as the crowd recognised our number 3 was back on the Oval turf and he acknowledged their continuing support. 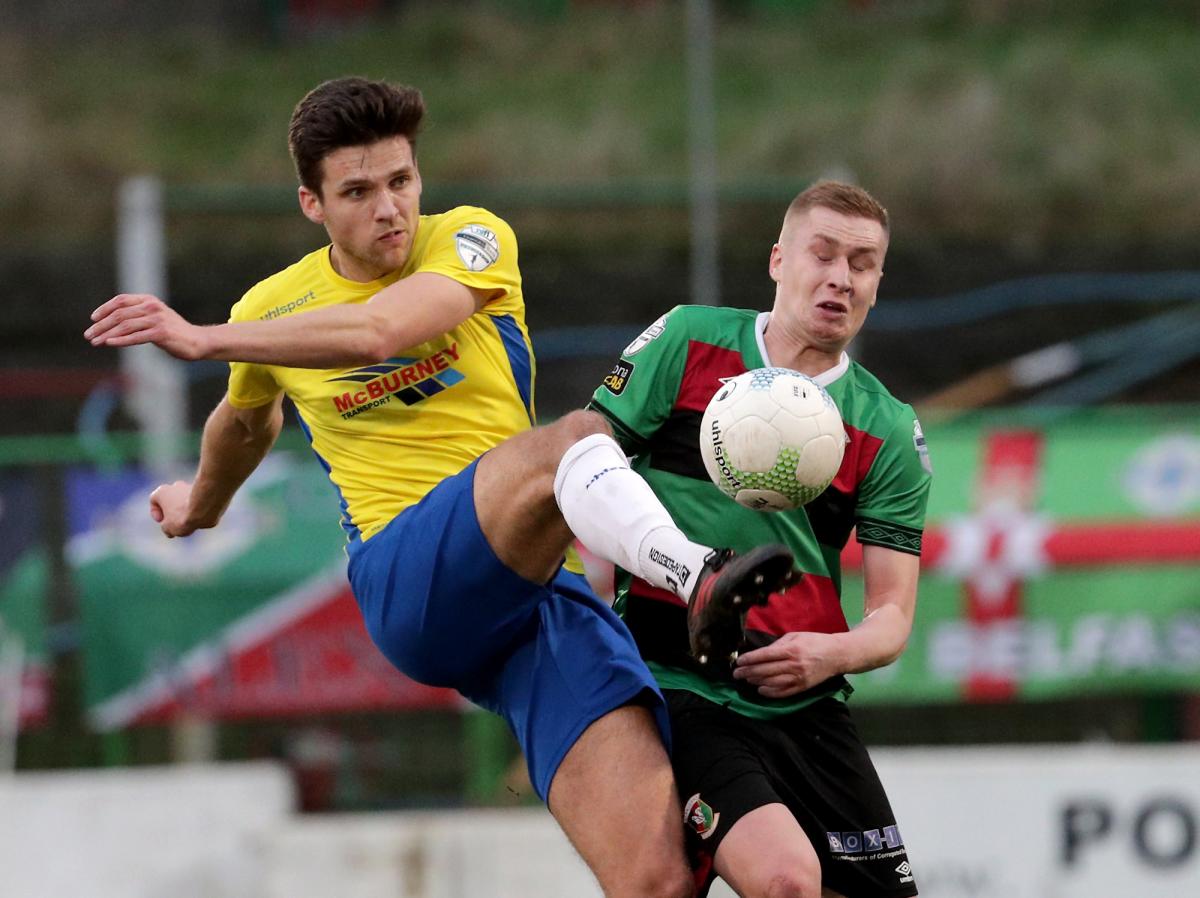 It was also a significant day for Calum Birney as the big central defender made his 200th appearance for Glentoran. 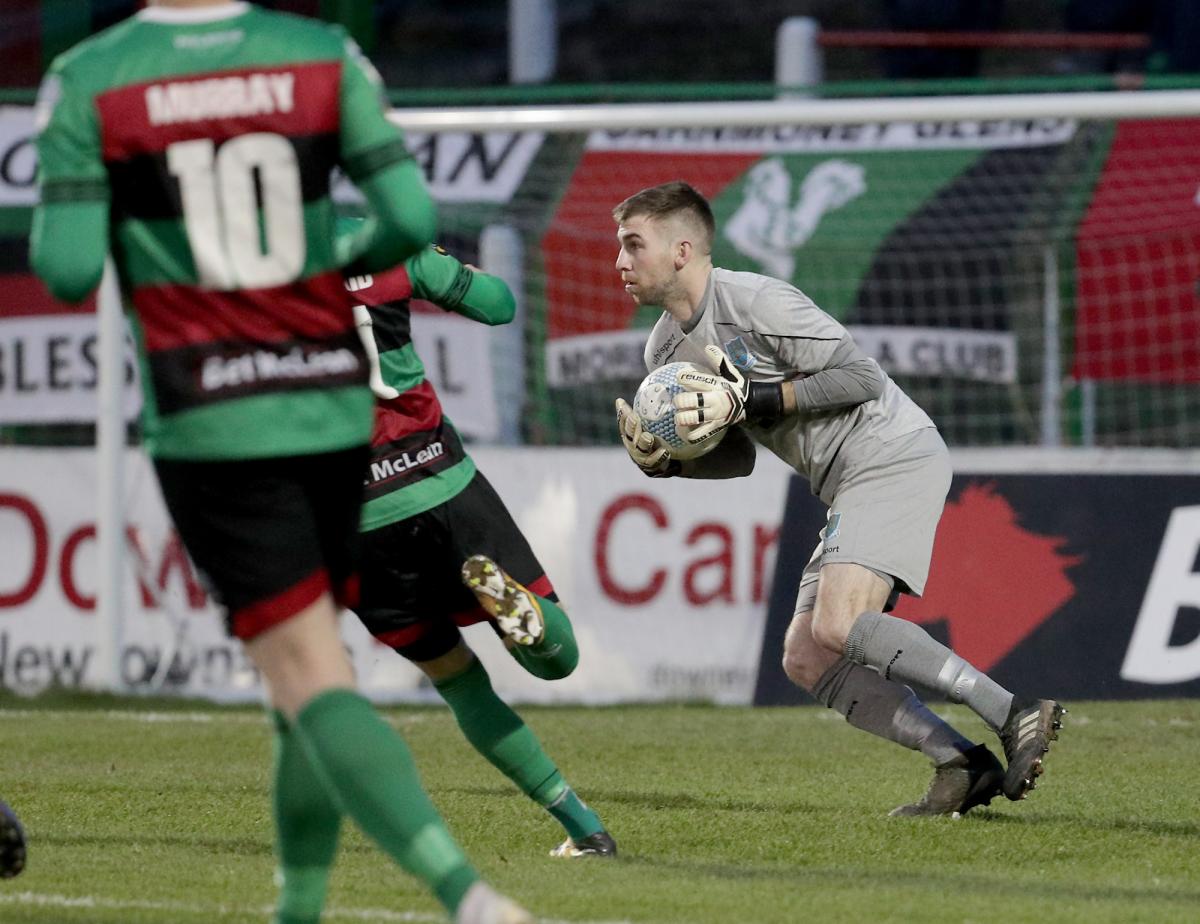 Only 5 players remained from the Boxing Day victory; Antolovic, Pepper, McClean, Gallagher and McDaid. Garrett, Plum, Nasseri, Van Overbeek and Stewart were on the bench whilst Gavin Peers sat this one out. 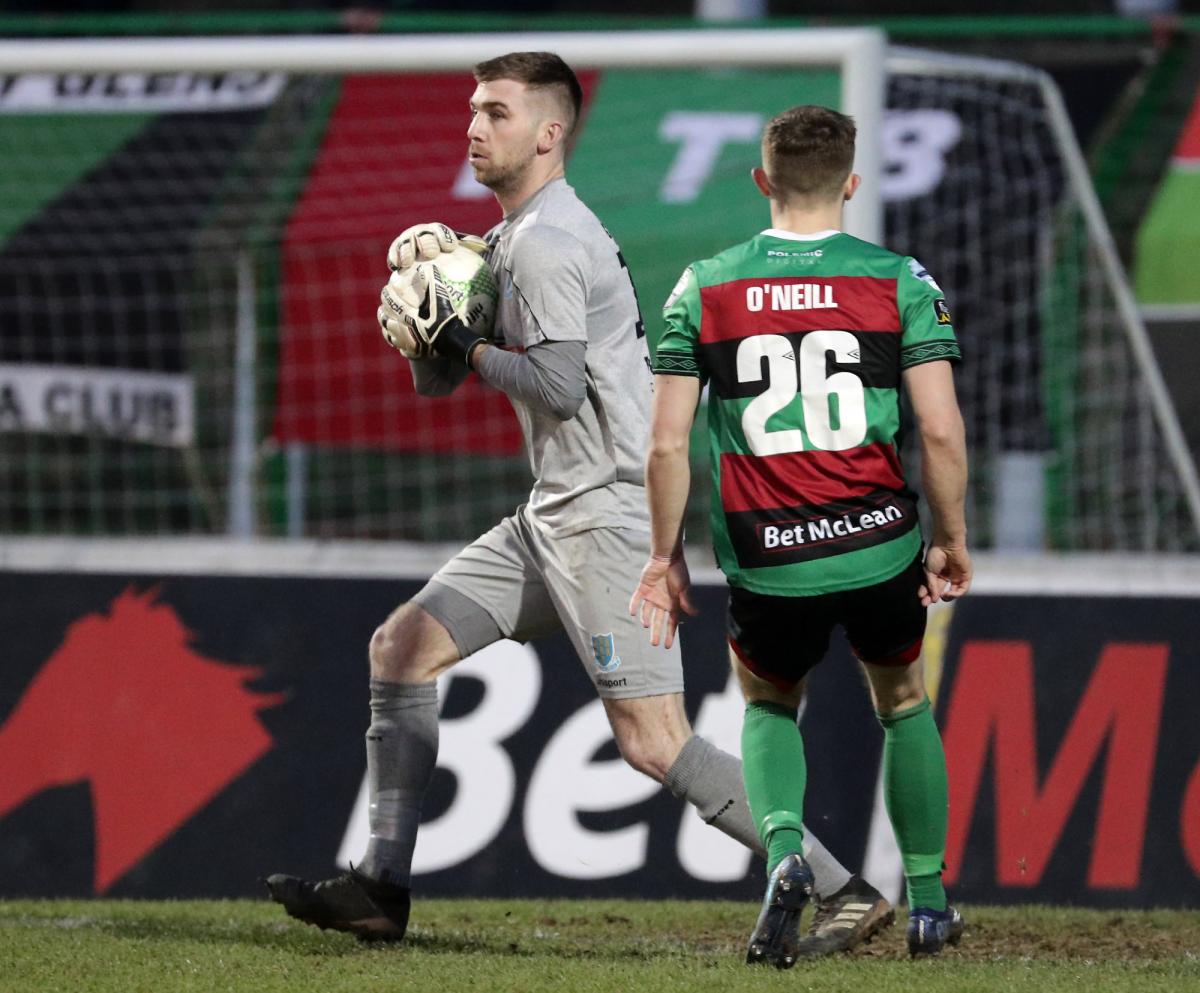 The opening 20 minutes was dull with the Glens creating a few half chances but failing to test Declan Carville, normally an outfield player, in the visitors' goal. Efforts from McDaid, Kane and Murray were all wide of the mark and although Paul O'Neill did get a header on target on 19 minutes it lacked power and was straight at the stand in custodian. For Ballymena United there were a couple of attempts on the Sydenham End goal but a decent save from Marijan Antolovic and a speculative effort (both from Leroy Millar) which flew high and wide saw the score remain at 0-0. 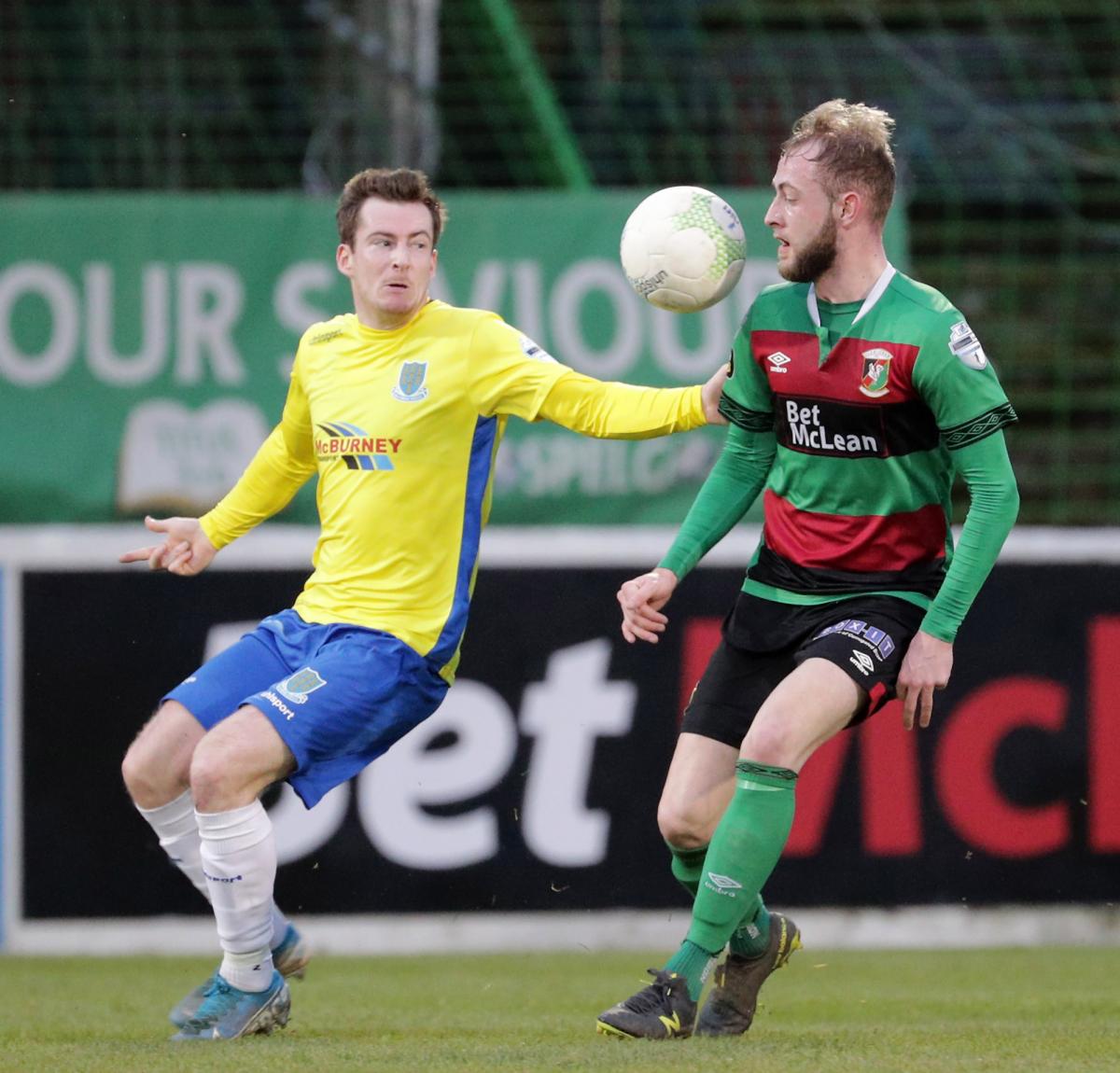 As the interval approached the visitors did venture forward, particularly down their left hand side but although crosses were put into the Glentoran penalty area, sound defensive work from both Birney and McClean snuffed out the danger. 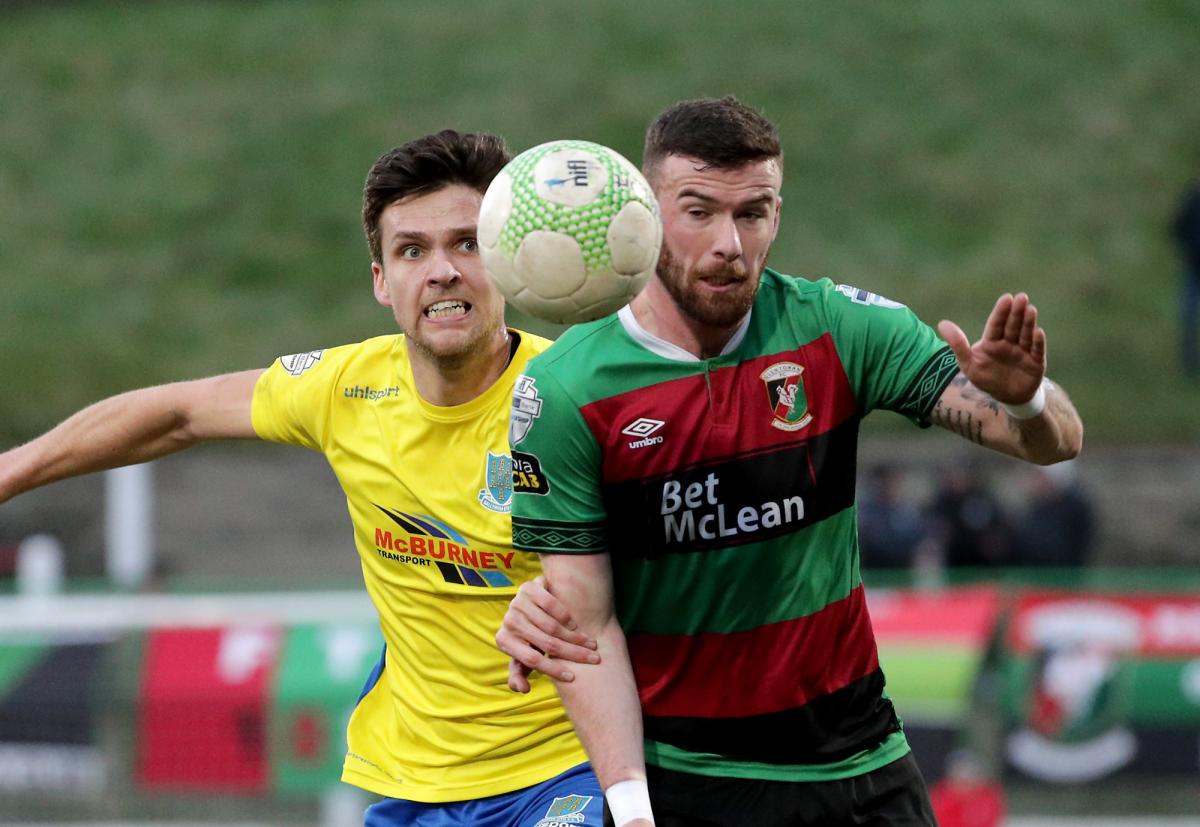 Birney was called on again 10 minutes after the break as Andrew McGrory looked to create a chance at the City End but the double centurion kept him out. Just before the hour mark manager, Mick McDermott made a double substitution as the Glens looked to up the pace and try to get all 3 points. Both showed attacking intent and Navid Nasseri's cross created an opportunity for Paul O'Neill (64) but the young striker was off target. Cameron Stewart (68) then headed over when set up by Robbie McDaid. McDaid himself then missed a great opportunity to break the deadlock on 70 minutes. A corner to the back post was hooked back across goal by Marcus Kane, the ball finding McDaid but the striker with 12 goals already this season couldn't test the rookie Ballymena United keeper. 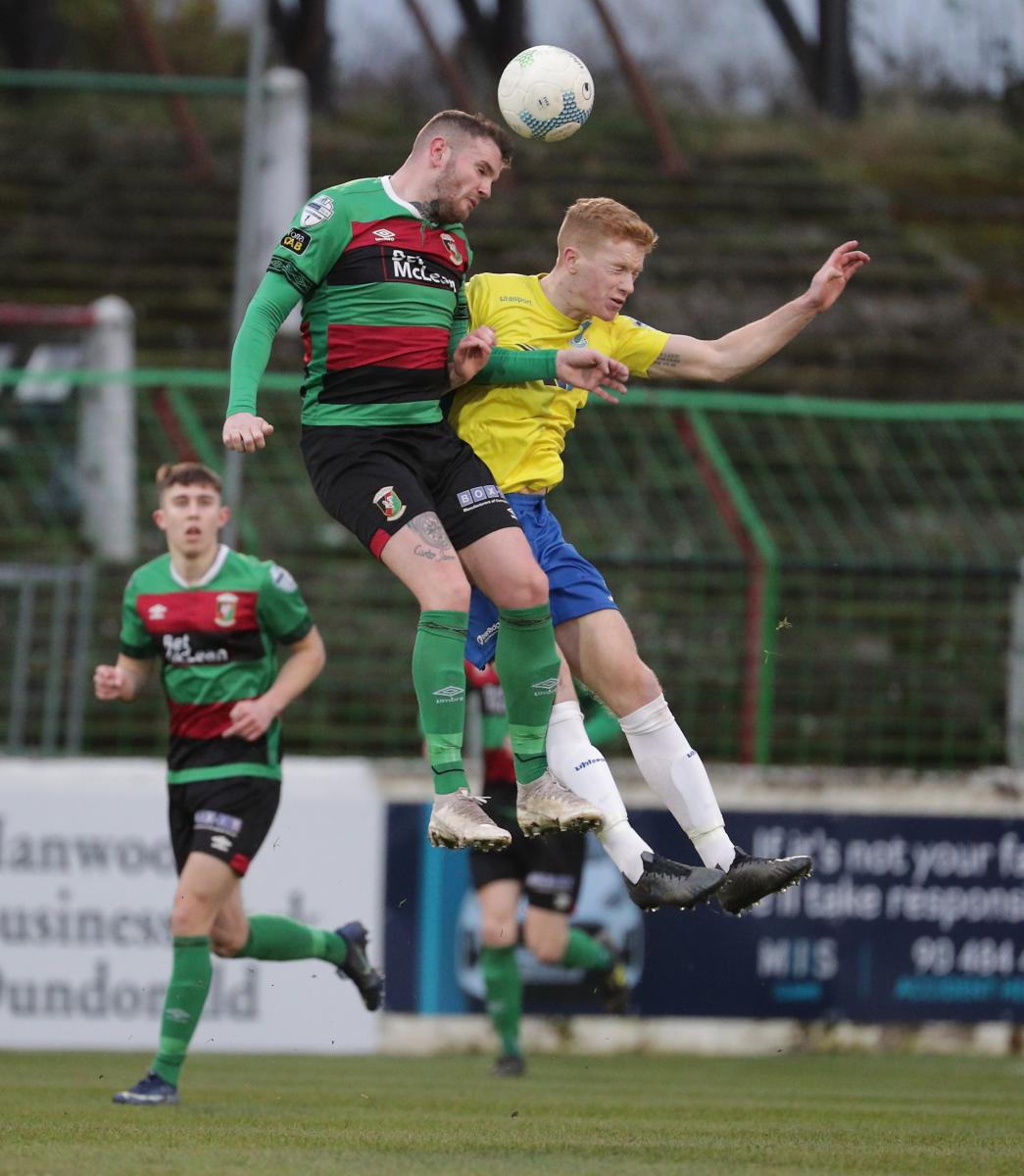 Just 14 minutes after his introduction, Cameron Stewart was forced off with a hamstring injury after trying to sprint onto a forward pass; Elvio Van Overbeek replacing him. Nasseri, McDaid and Van Overbeek then all missed chances before, on a rare foray forward, Adam Lecky shot wide for the Sky Blues. 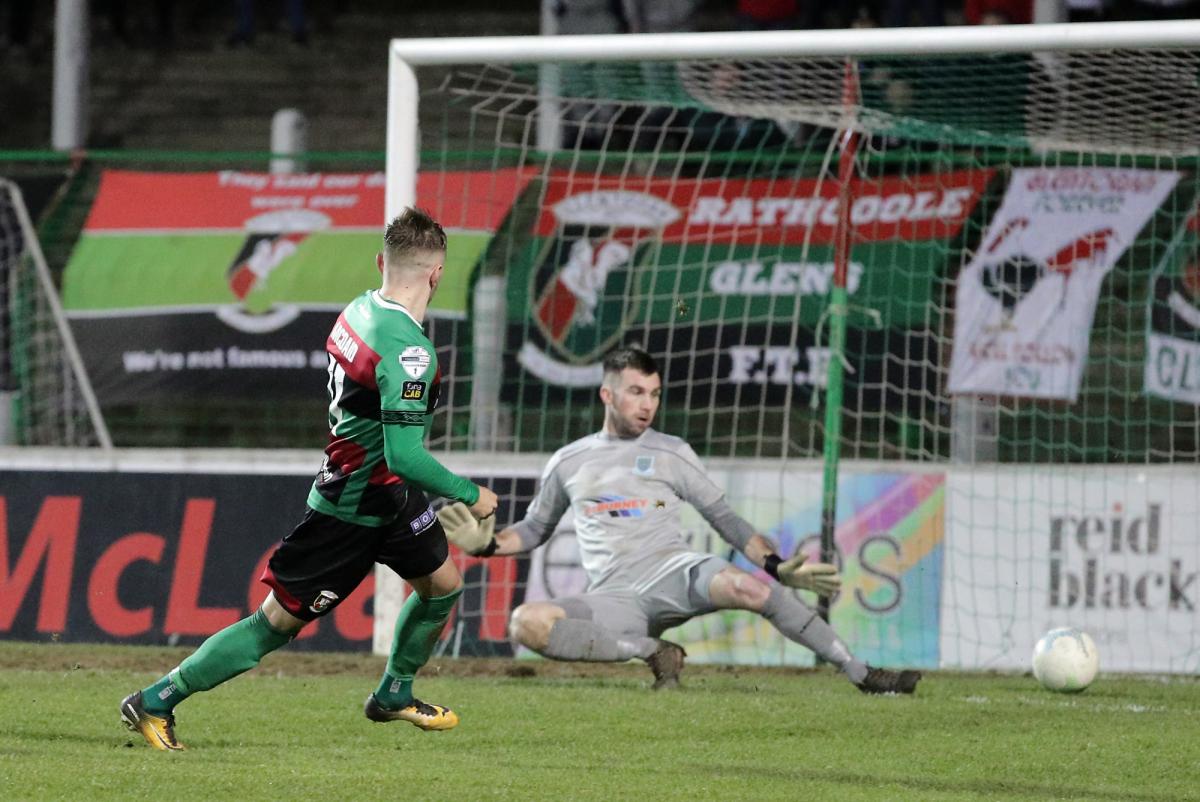 With 5 minutes left and with some fans heading for the exit, Glentoran scored. The Glens had been on the attack and good link up play between Nasseri and Kane saw the skipper find Paul O'Neill on the left. His cross was met by Robbie McDaid but Declan Carville easily gathered McDaid's header. The groans from the crowd didn't last though as Carville's poor kick out hit the back of one of United's central defenders about 35 yards from goal. It bounced back to McDaid who burst into the area and calmly slotted home from around 12 yards. Relief! 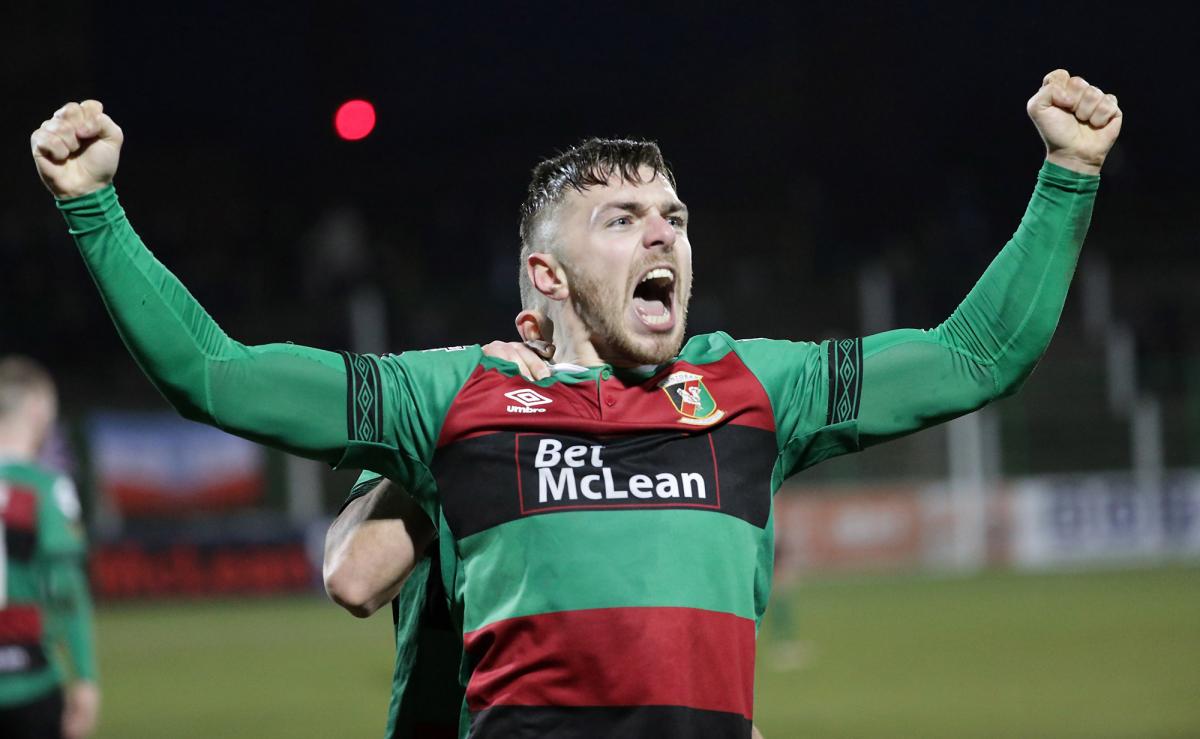 2 minutes later and Robbie had another chance but a last ditch tackle from Jim Ervin prevented McDaid doubling the Glentoran's lead. There was further drama on 90 minutes when a violent challenge by Adam Lecky on Chris Gallagher saw the Ballymena player rightly shown a red card. It the aftermath players from both sides got involved and there were further cards for O'Neill (red) and McClean (yellow). Bizarrely though referee Crangle stopped there with Cathair Friel particularly fortunate to escape any punishment. Deep into added time Friel hacked down Robbie McDaid right under the nose of the linesman but although Glentoran were awarded a free kick no further action was deemed necessary by the officials! 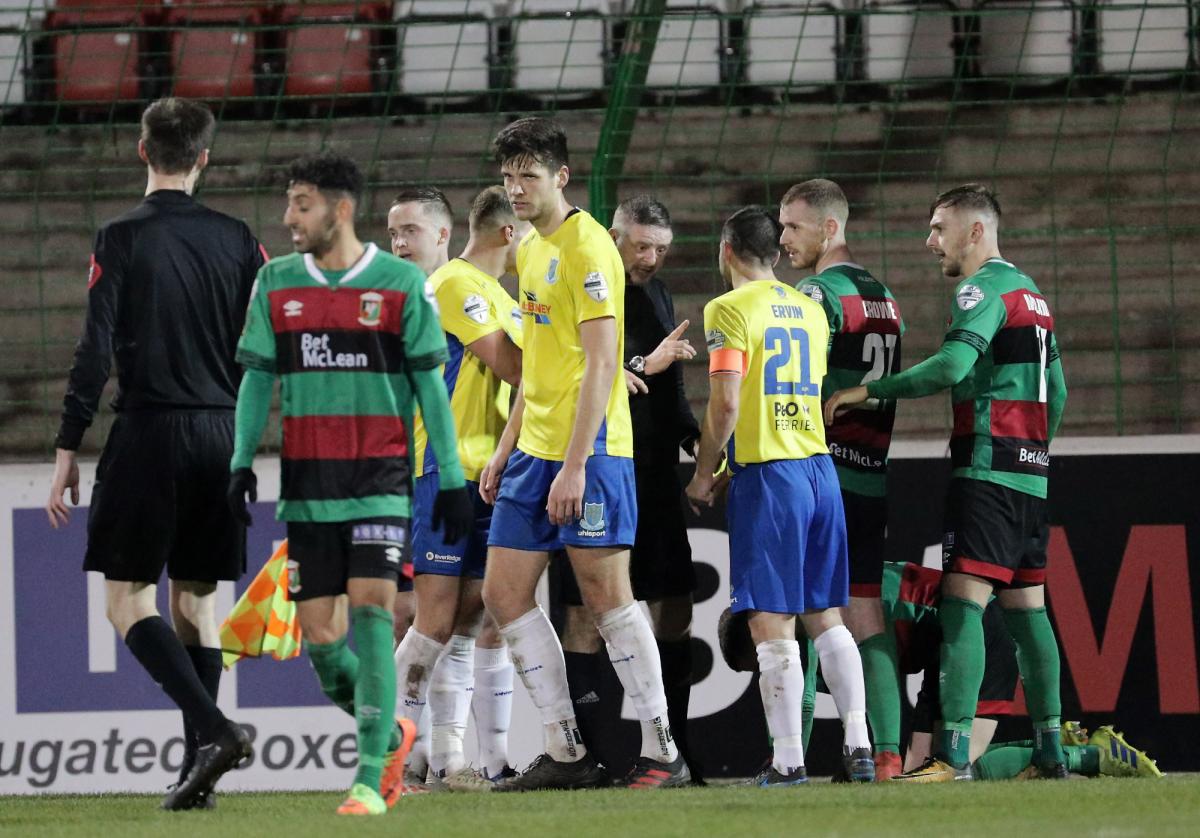 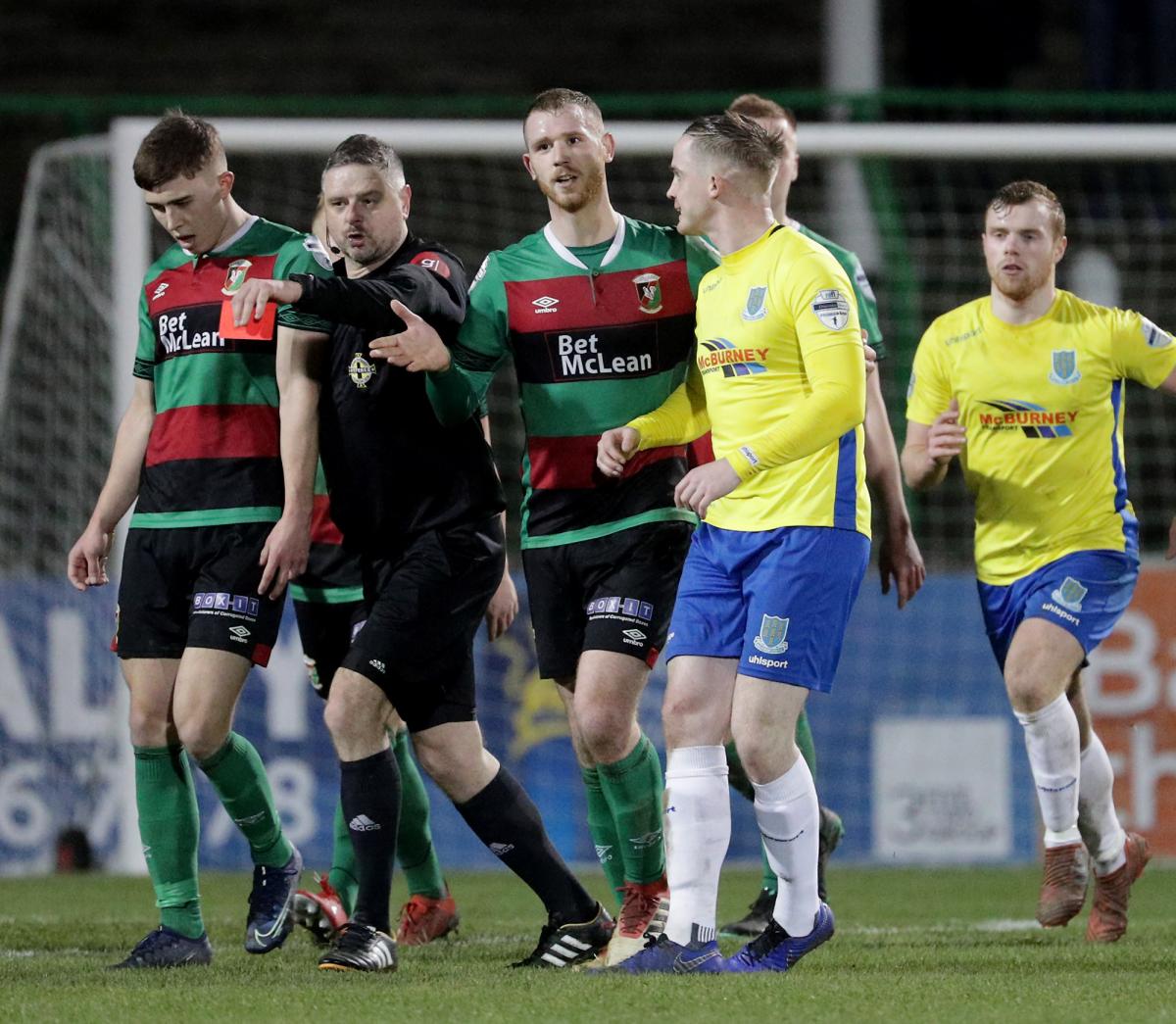 On 98 minutes the Glentoran support held their breath as Ballymena United were awarded a corner. The ball was played into the box but headed clear. It was put back in a second time but again a Glentoran defender got a head to it. This time it fell to Navid Nasseri who broke clear from midway inside his own half. He was pursued by the Ballymena keeper who had gone up for the set piece and Ervin. Nasseri was too quick for them though and as he reached the 'D' at the Sydenham End, casually passed the ball into the back of the unguarded net. Game over! 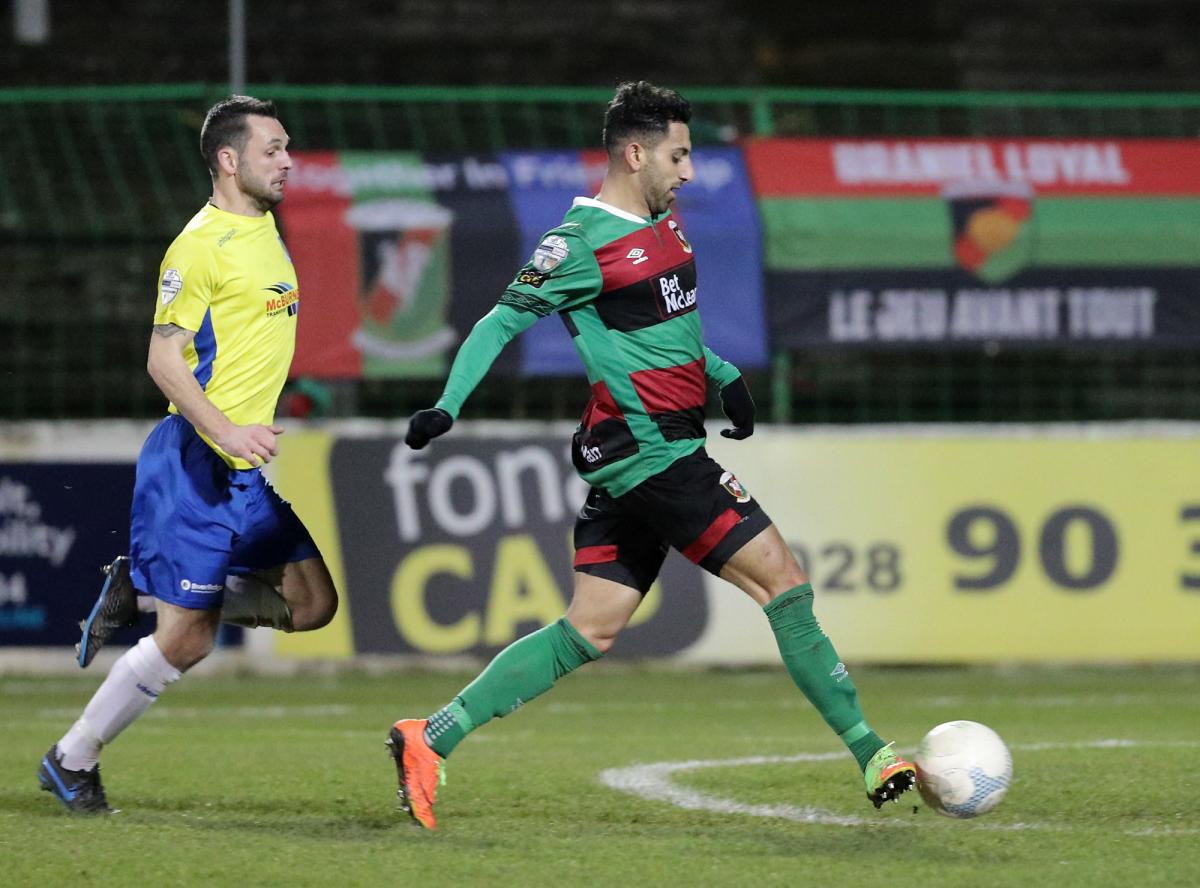 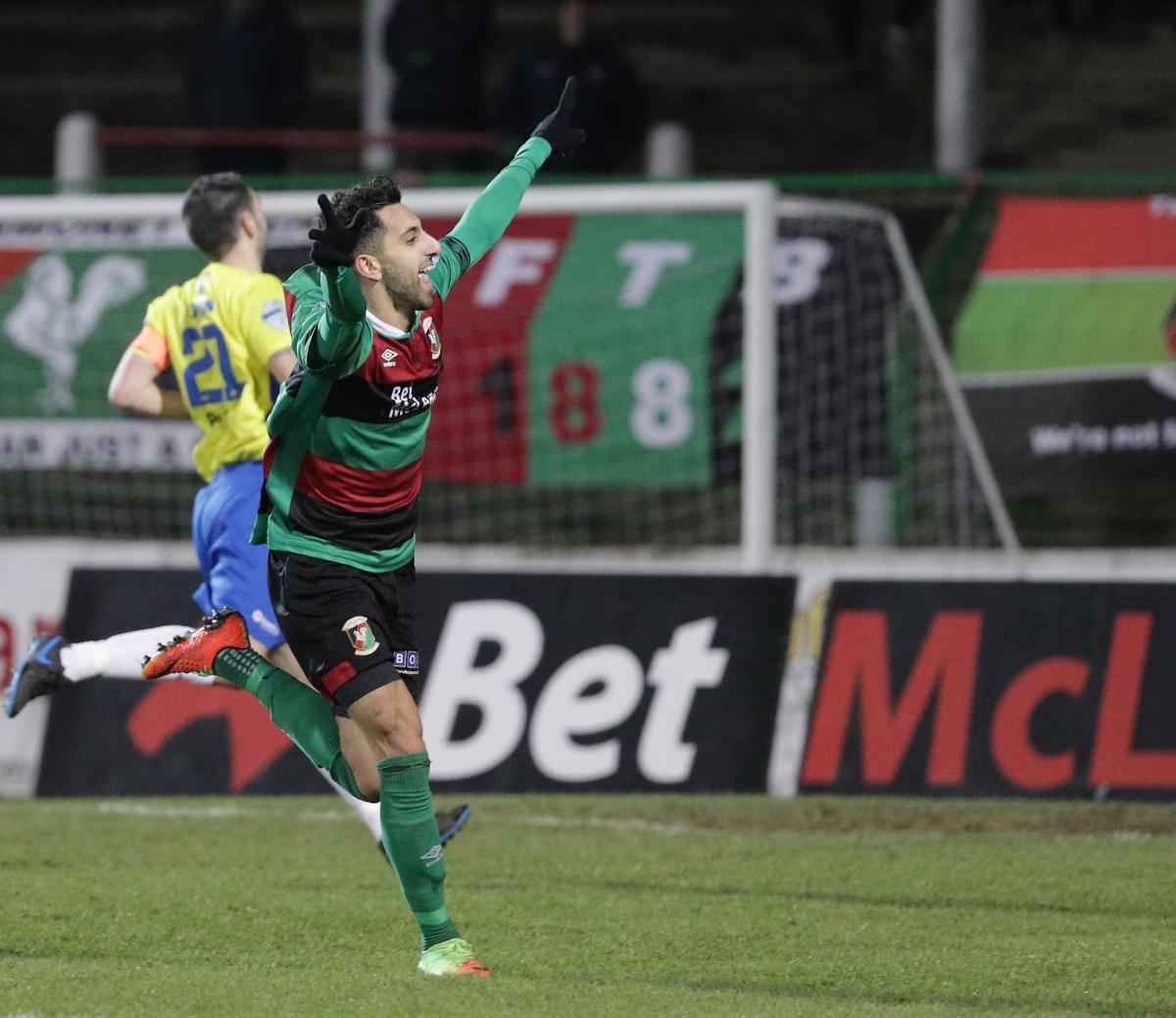 So another win and the unbeaten run has now extended to 12 games in the Danske Bank Premiership. Along with great team showings we are also witnessing some outstanding individual performances and we had that again today from the non-stop Connor Pepper and Man-of-the-Match, Chris Gallagher. Next up is a trip to Dungannon Swifts on New Year's Day. See you all there. 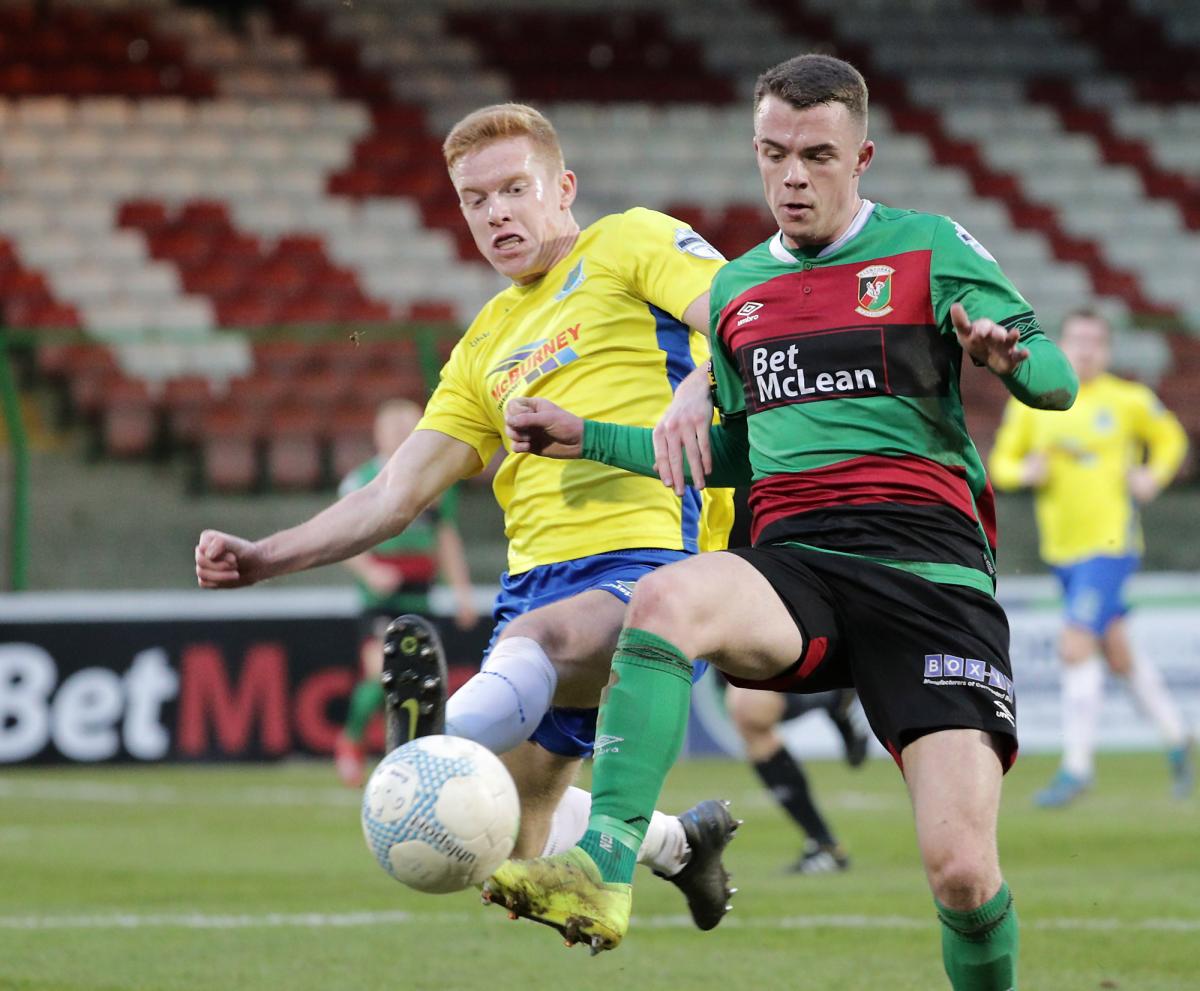