A second half equaliser from, the in-form Robbie McDaid gave Glentoran a point today at home over Crusaders. A point was the very least the Glens deserved from the match, as we extended our unbeaten Danske Bank Premiership run to nine matches.

Mick McDermott made three changes to the starting eleven at Coleraine last week. Paddy McClean and Cameron Stewart returned from injury, while Hrvoje Plum had served his one match suspension. John Herron and Darren Murray were substitutes today, while Willie Garrett was out of the squad. Skipper Marcus Kane was also in the starting line-up, having been substituted at half time at Coleraine. 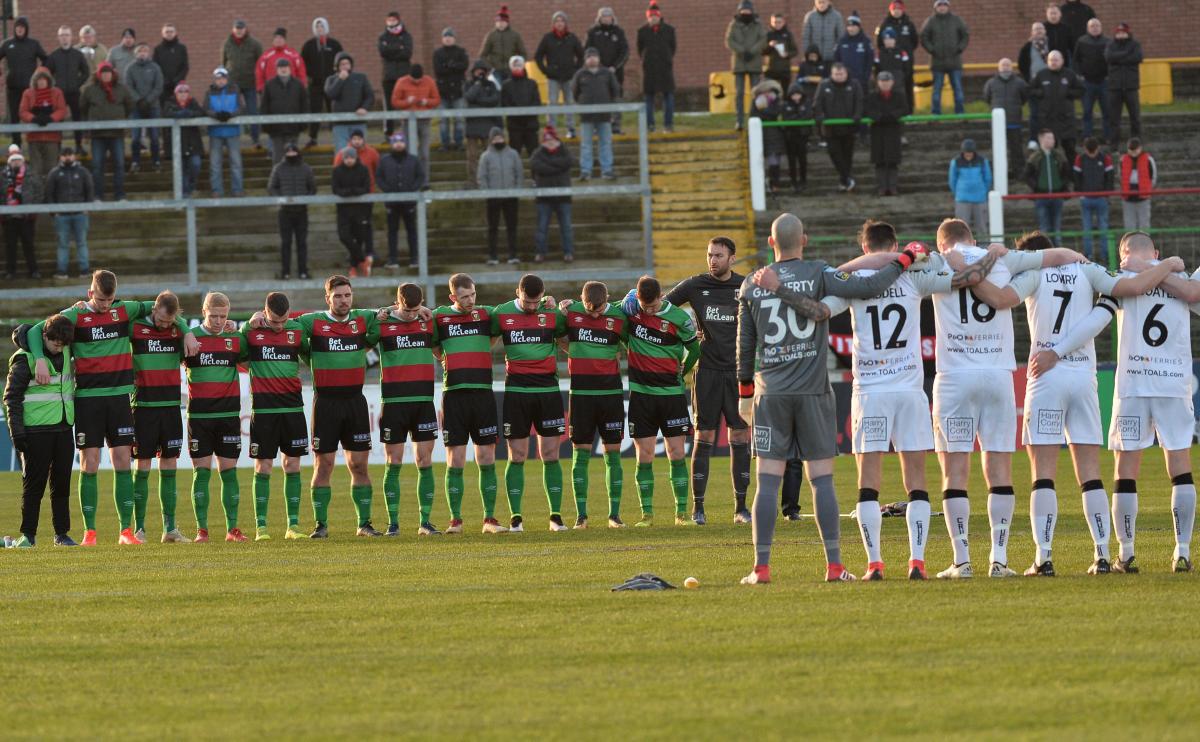 Prior to kick off the players and big crowd impeccably observed a minute’s silence for the young Carrick Rangers player, Jerry Thompson, who died in tragic circumstances on Tuesday.

The Glens started the brighter team, with Cameron Stewart leading he line very effectively and chances in the first fifteen minutes for McLean, McDaid and Plum. Then came a number of controversial refereeing decisions that set the tone for the rest of the match. 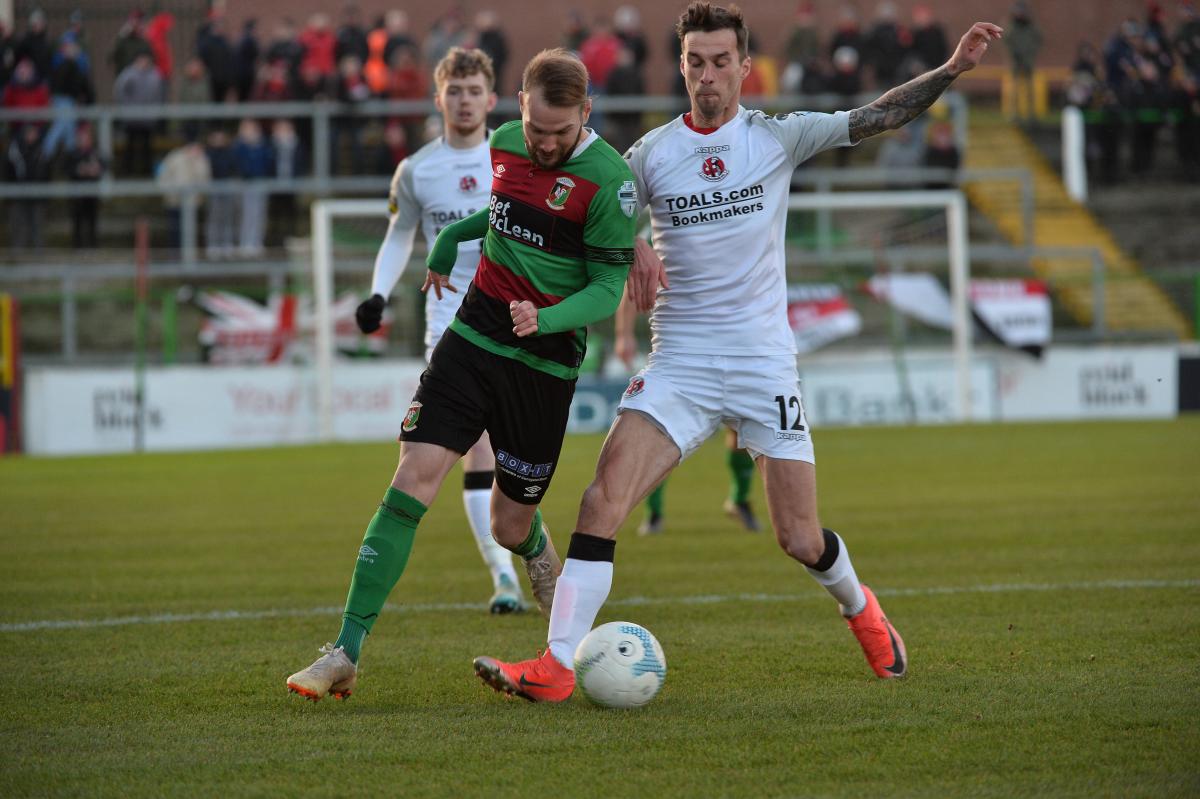 On seventeen minutes Jamie McGonigle should have been booked for a crude, high footed challenge on Gavin Peers which left our big central defender sprawling on the floor. Nothing given! Then within the next couple of minutes we had Glentoran appeals for fouls either in or on the edge of the penalty area by Billy Joe Burns on McDaid and Howard Beverland on Stewart. Nothing given!

On twenty-four minutes Crues captain Colin Coates – so often the scourge of Glens defences – headed just wide from a corner after a mix-up in the Glens defence.  Immediately afterwards Cricky Gallagher blasted over at the other end from a Plum corner. 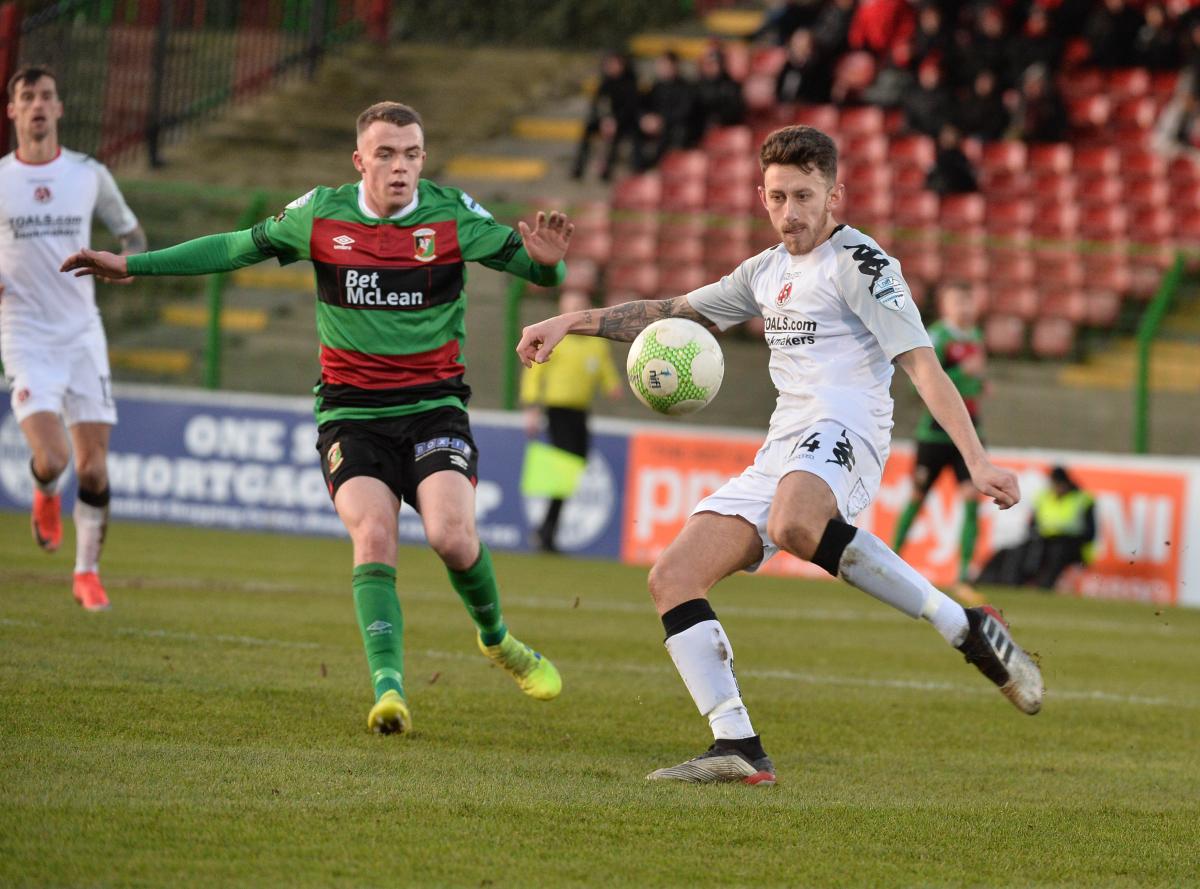 The first yellow card of the match came on thirty-five minutes when Hrvoje Plum was cautioned for what looked like a blatant dive by McGonigle. That came as little surprise to Glentoran supporters as throughout, the consensus from the home fans was that referee appeared to be somewhat intimidated by constant complaints from Crusaders players. Not the last time that suggestion was to arise over the course of the ninety minutes. 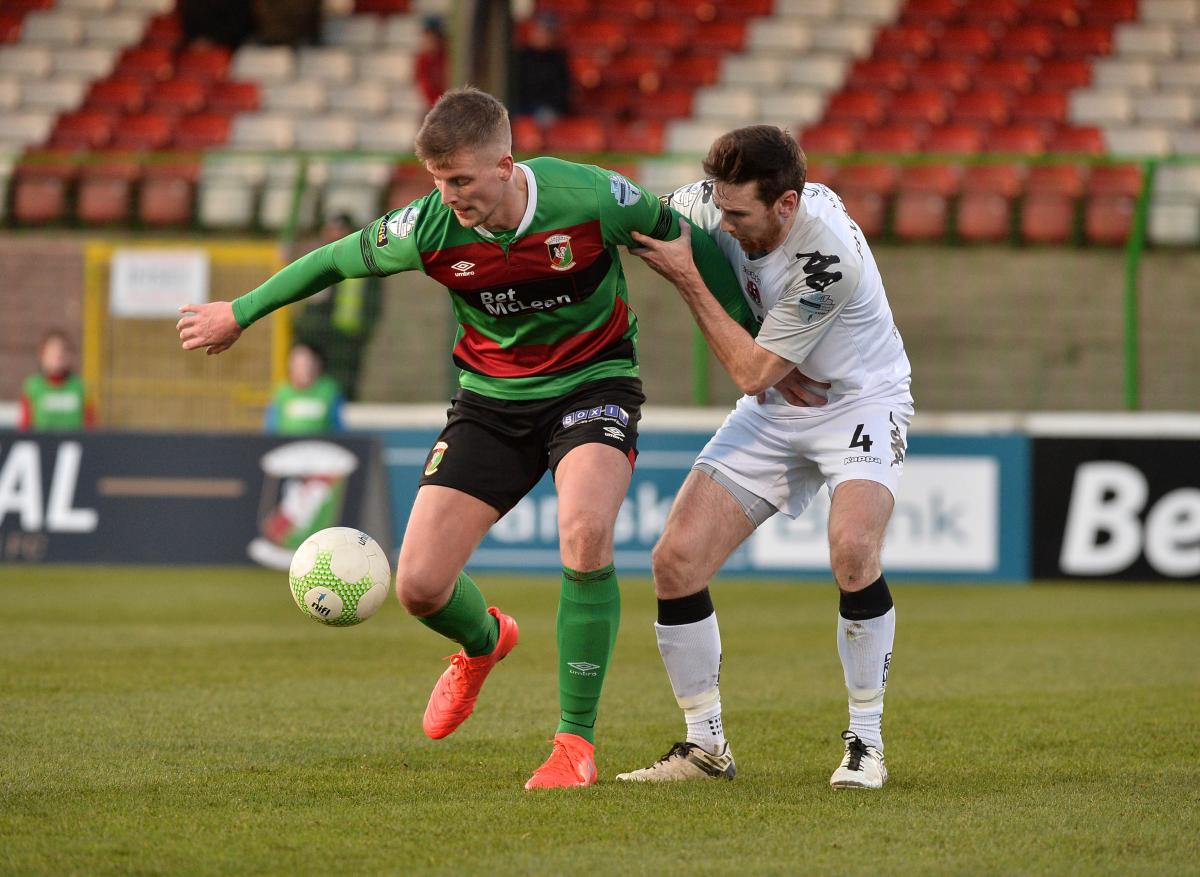 The Glens remained reasonably well on top for the final ten minutes of the half, but the only incidents of note came when Gavin Peers headed just over from a Plum corner, and a booking for Billy Joe Burns for fouling a marauding Robbie McDaid. 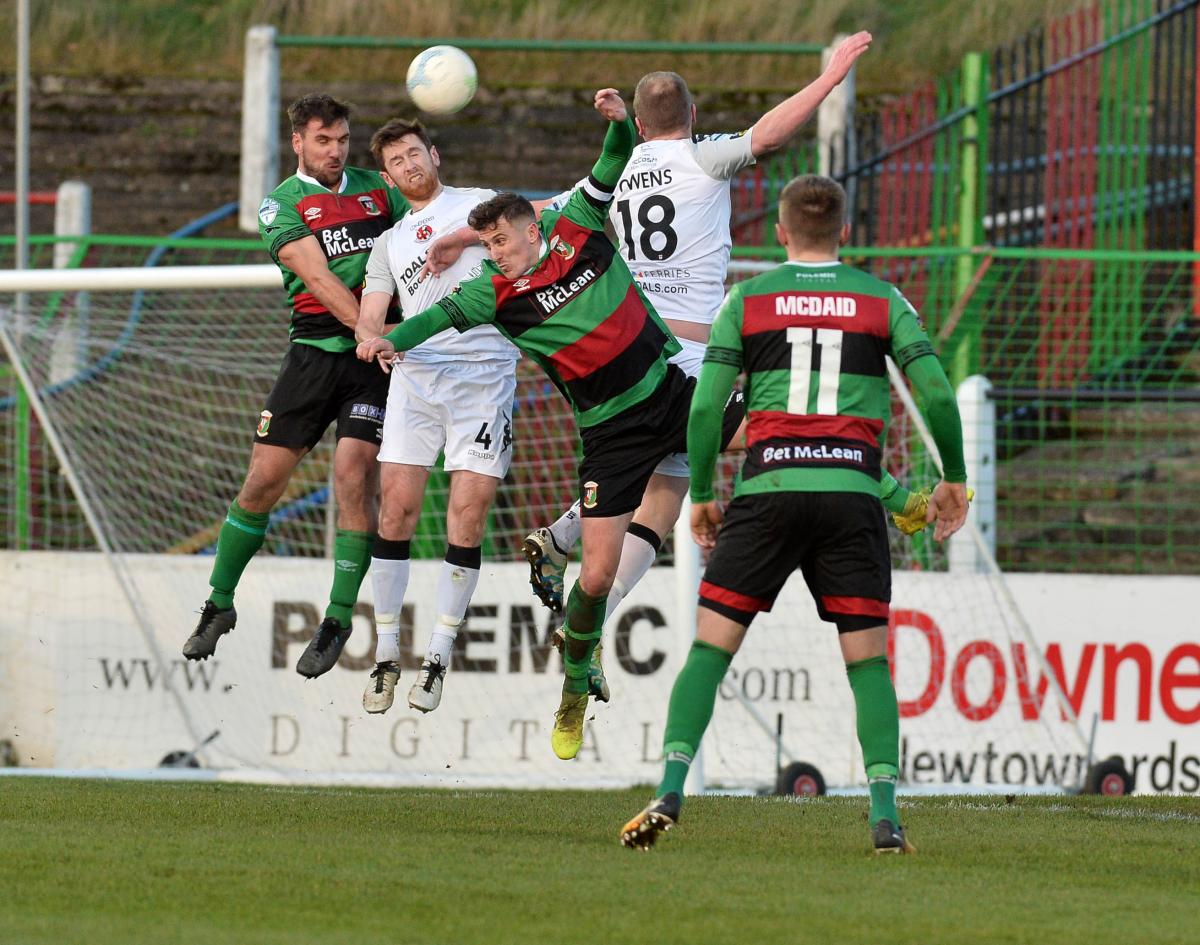 Over the past few years we must have lost count of the number of matches v Crusaders where a relatively even first half was undone for the Glens in the first five minutes of the second half. It looked like today was going to fit that trend. The half started briskly with McDaid very unlucky with a shot headed off the line by Burns, and a great reflex save by Marijan Antolovic from a Declan Caddell header.

The opening goal came on forty-eight minutes from the corner from Antolovic’ save. Peers headed the corner but as he ran to follow up, he appeared to be tripped by Ross Clarke. As he fell, the boll broke to Jamie McGonigle on the edge of the box. The November NI Player of the Month’s well hit shot passed through the Glens defence and deceived the goalkeeper. One-nil Crusaders. 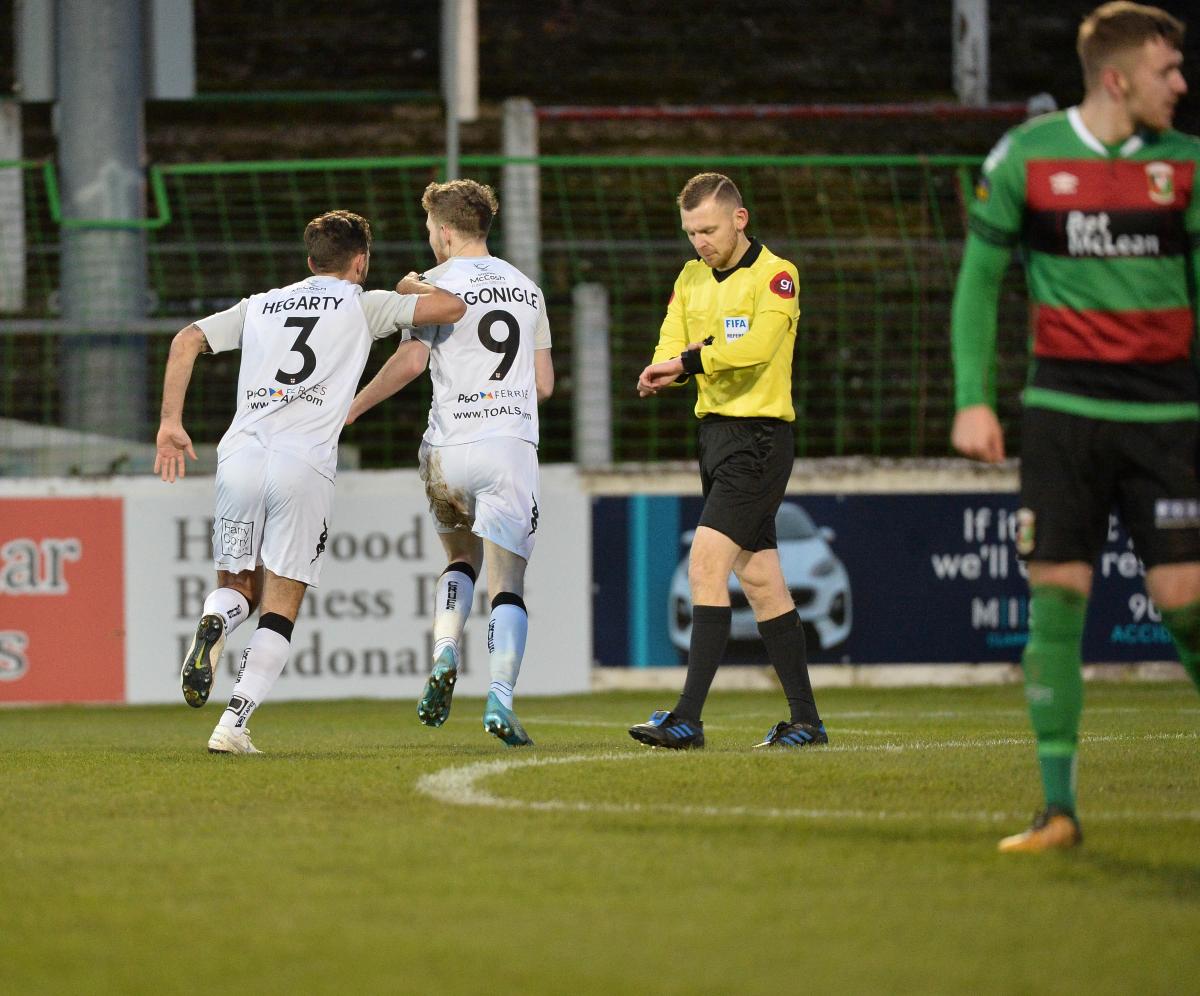 Unlike previous clashes between these two teams, Glentoran heads didn’t go down after losing the goal. They pressed hard and, on the hour, brought on Navid Nasseri for the hardworking Paul O’Neill on the left side of the attack. Our best chance for this period came on sixty-two when Robbie McDaid – through sheer strength and determination – brushed of a foul from Beverland to shoot just over from outside the box. Beverland was called back and booked for the foul. 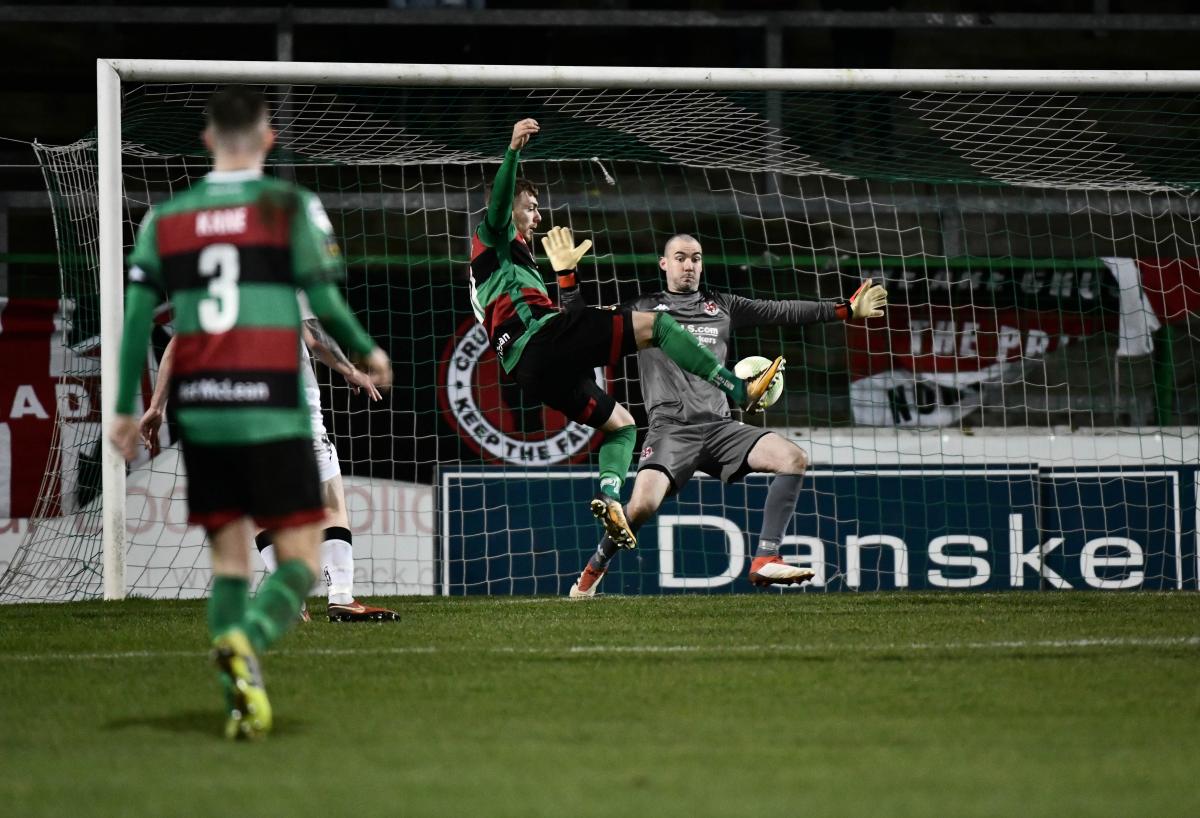 The deserved equaliser came with nine minutes to play. Joe Crowe played a high ball from midfield that Plum headed on into the Crues area. Cameron Stewart nodded back for Peers to head forward to McDaid in a very central position. Robbie doesn’t miss from there, so the scores were level. A goal with aerial work of which the Crues themselves would have been proud. 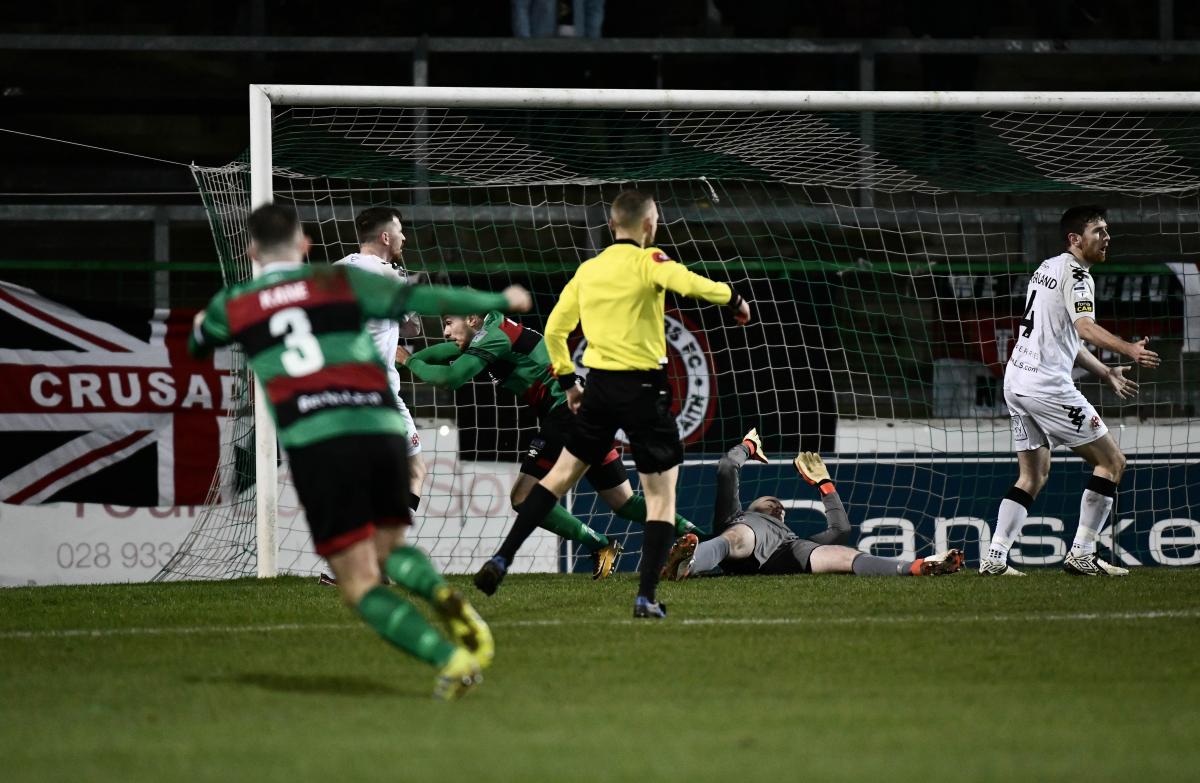 Then on eighty-eight minutes came the last and most controversial refereeing decision of the day. Cameron Stewart won a throw in for the Glens deep in the Crues half and as the ball went harmlessly out of play, Howard Beverland hit the ground in a manner that suggested sniper fire from the Goliath crane. The linesman immediately called to the referee who had no hesitation in sending off the Glens number fourteen, apparently for an elbow. This was in stark relief to a situation a few minutes earlier when the referee gave a free kick for Glentoran and called the physio after a clear elbow from Jordan Owens on Joe Crowe yet failed to issue even a yellow! To what must have been the relief of his friends and family, Beverland made a very quick and full recovery once Stewart left the pitch. 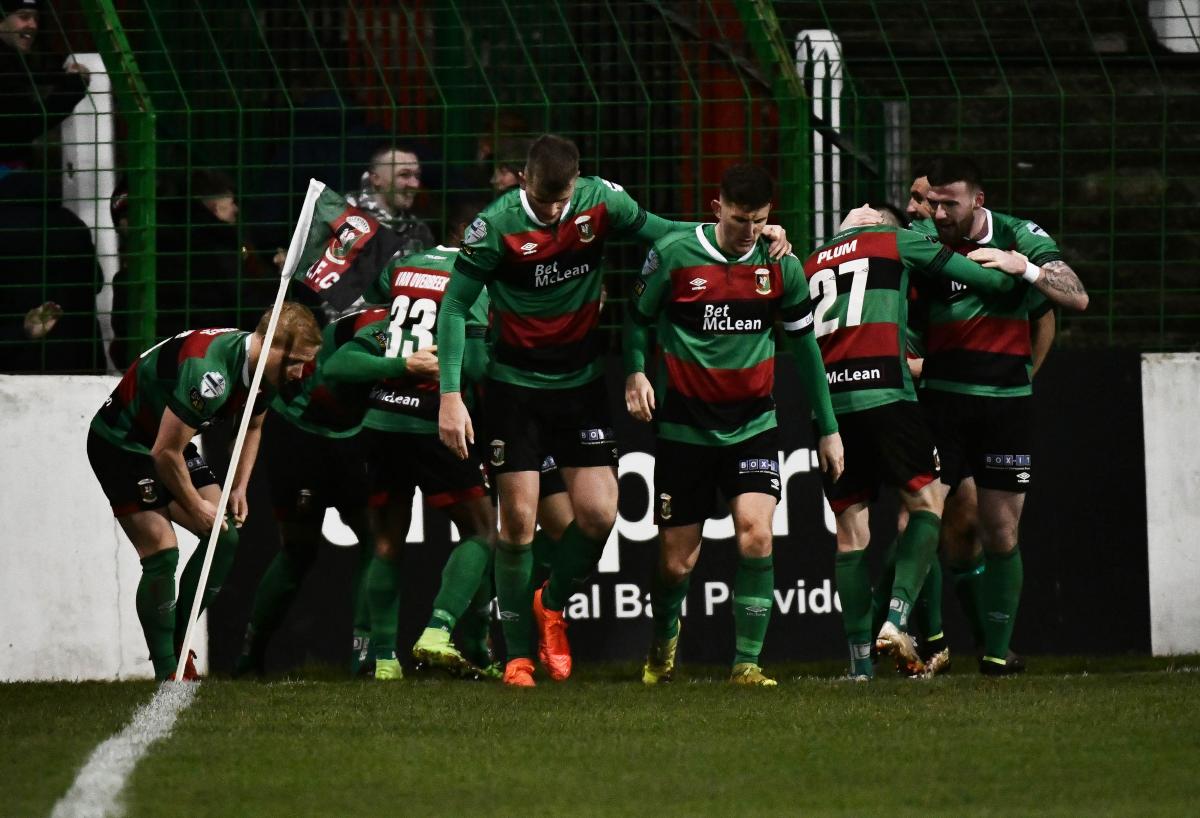 So, that’s nine games unbeaten in the Danske Bank Premiership and a run of three consecutive games with teams above us and no defeats. A hard working, spirited performance from the Glens that deserved at least the point and probably more. The Glens support will be happy with our performance and continued progress, but what a shame that – not for the first time – talk of the match afterwards was focussed on officials rather than players. 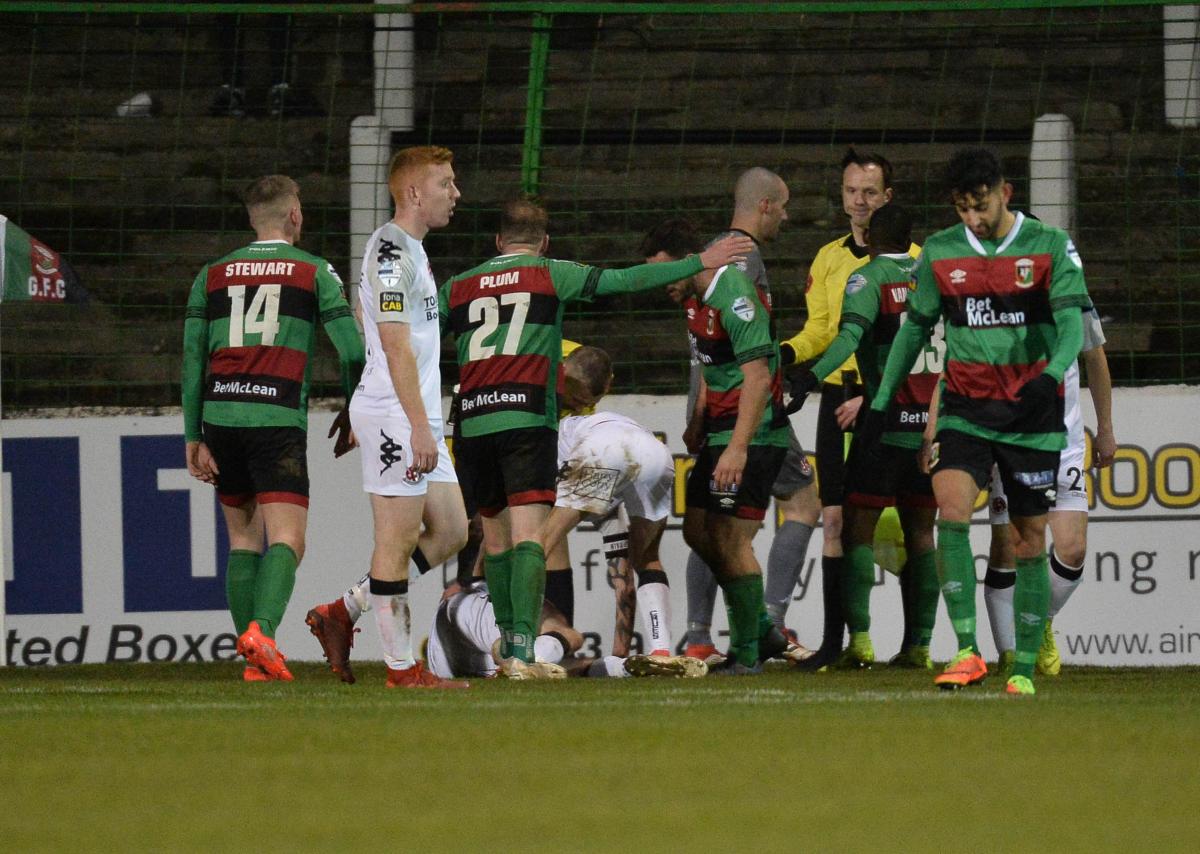 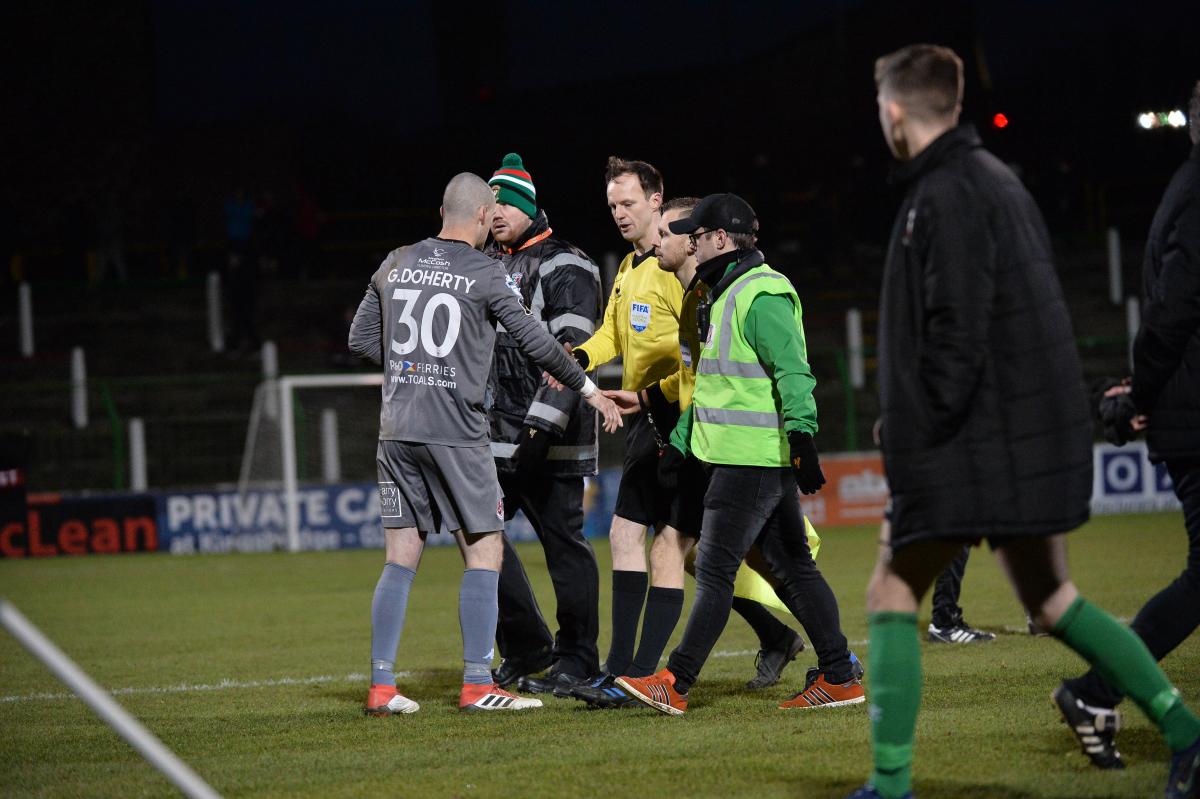