Glentoran were denied all three points at a windswept Mourneview Park this afternoon due to a penalty save by Jonny Tuffey and a bizarre goal from Aaron Harmon.

For the third week running the Danske Bank Premiership games were played in shocking conditions with strong winds and occasional heavy showers once again the order of the day. 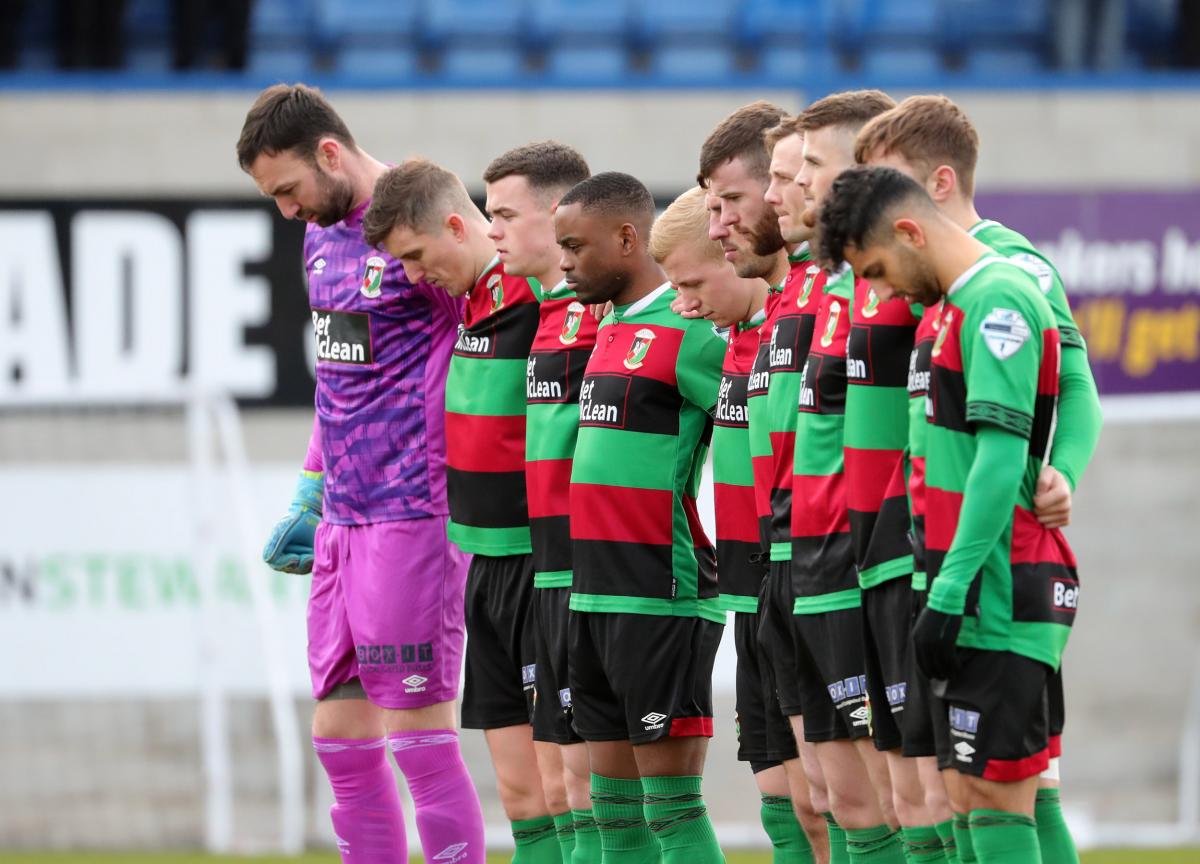 Before kick-off both teams observed a minute's silence in memory of the late Harry Gregg OBE who sadly passed away earlier this week. 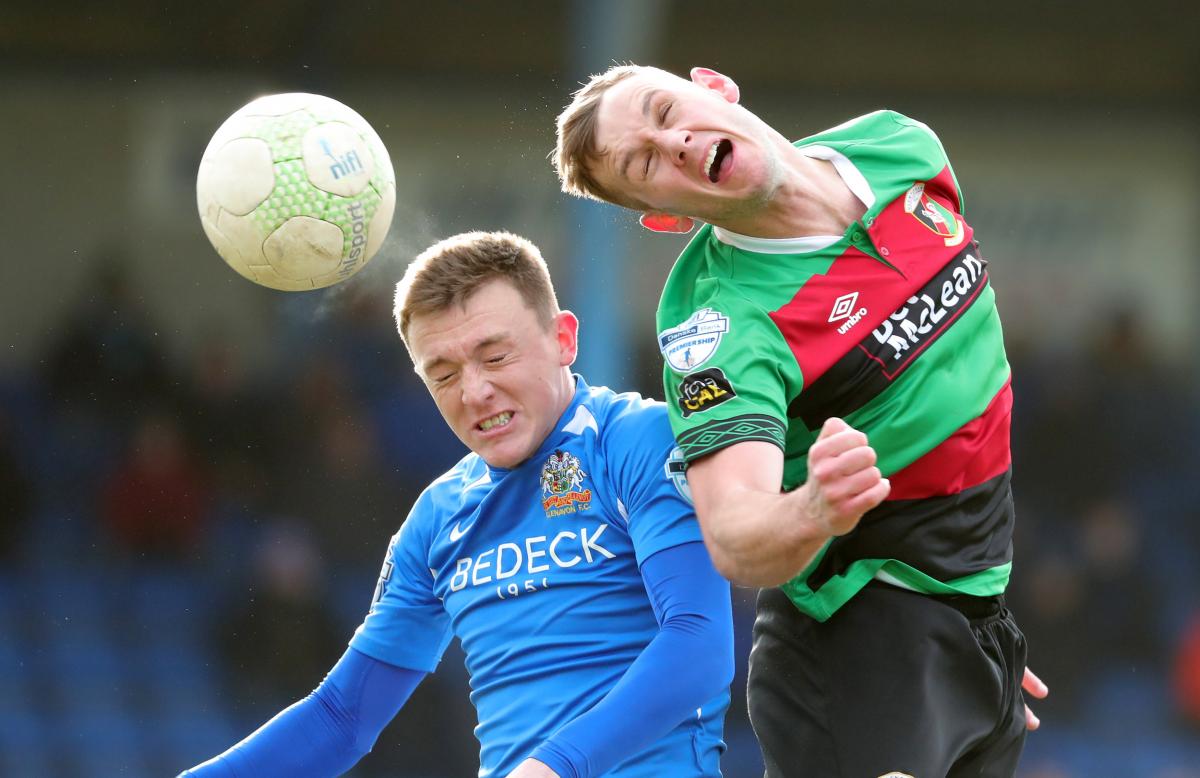 When the game got underway, Marijan Antolovic was back in goals for Glentoran and manager McDermott also gave a debut to recent signing Seanan Clucas. Glentoran had the advantage of the wind in the first period and from the first minute went on the attack; McDaid and Nasseri linking well on the edge of the Glenavon penalty area with Nasseri seeing his shot blocked.  With 3 minutes gone there was a chance at the other end when the ball broke kindly for Dylan Davidson but Antolovic got down well to make a really good save. 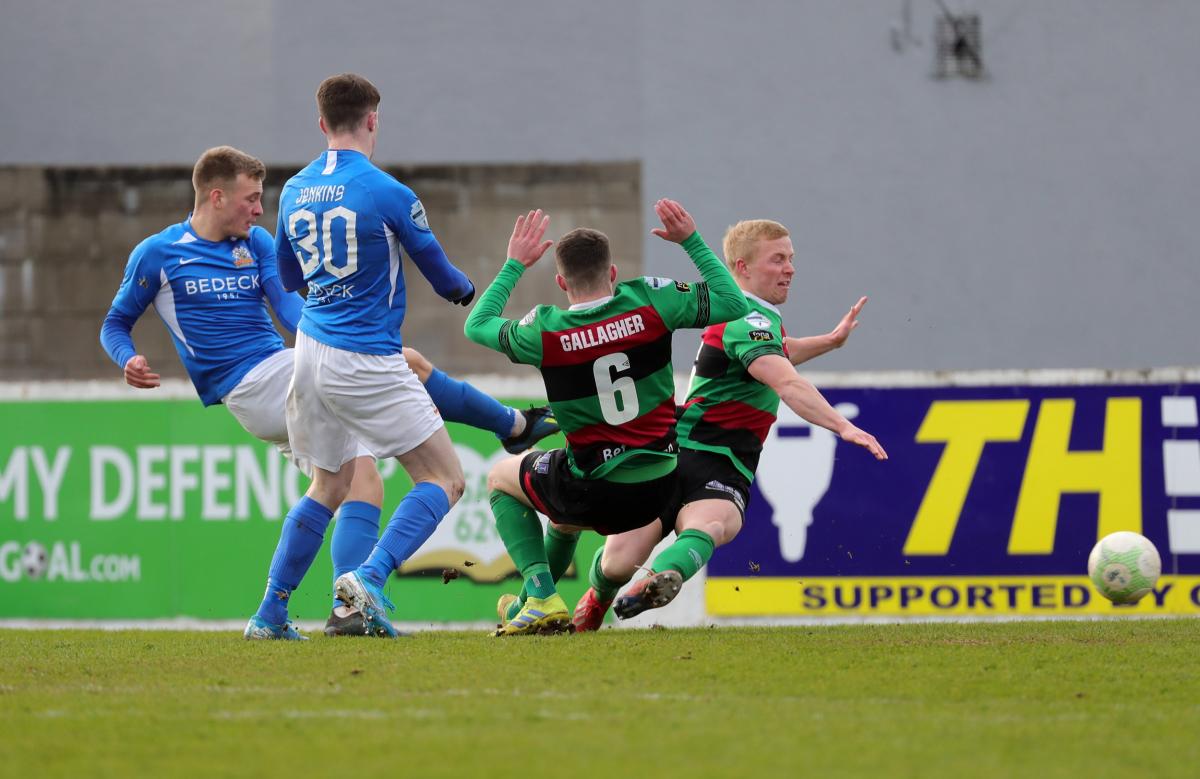 Following further efforts by McDaid and Nasseri, Van Overbeek won a corner on 16 minutes Nasseri and Van Overbeek took the corner quickly and a dangerous ball into the 6-yard box was scrambled clear by Tuffey for another corner. A minute later though, the East Belfast Glens edged in front. A poor throw in by Glenavon saw Nasseri head the ball to McDaid. He in turn headed it to Donnelly who flicked perfectly into the path of Nasseri. Navid raced into the box and drilled a low shot past Tuffey; 1-nil Glentoran. 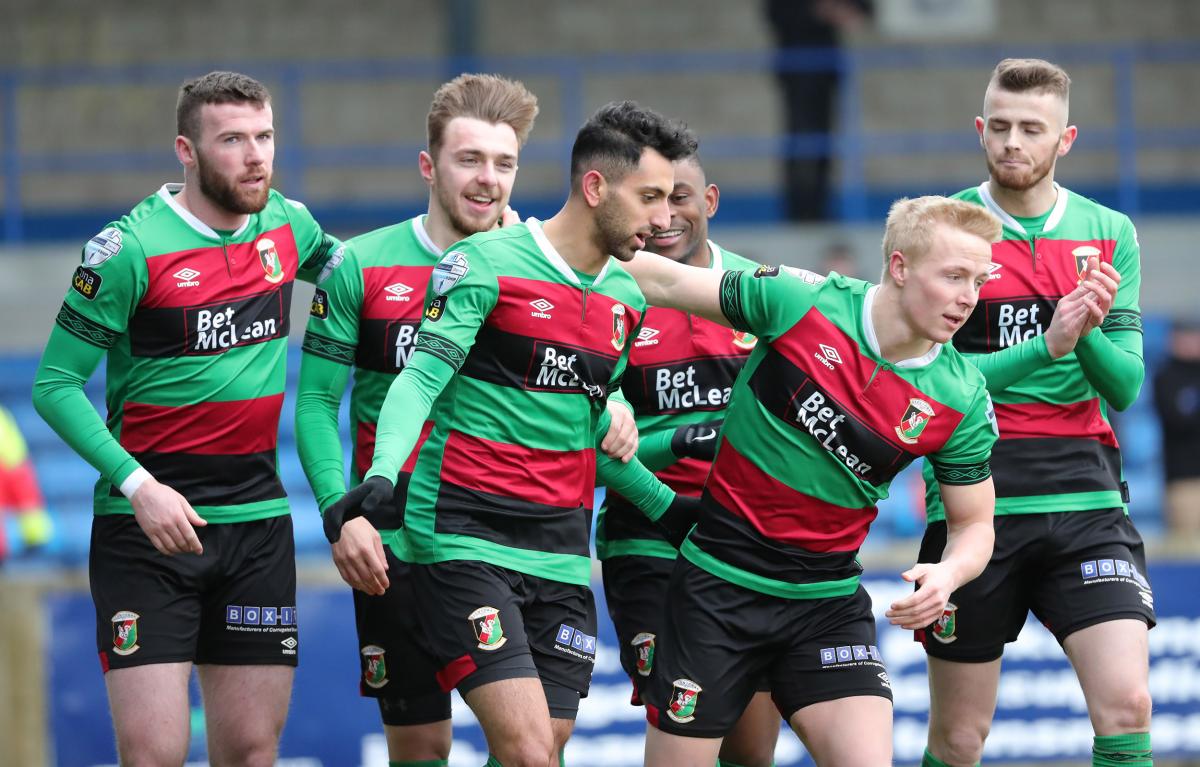 Both sides were struggling with the conditions but it always looked like Glentoran had the upper hand. Ruaidhri Donnelly's volley went just wide and Patrick McClean was unlucky to see his flick from Nasseri's free kick hit the post. Against the run of play Glenavon equalised on 37 minutes. A hopeful ball out to the right was picked up by Joshua Daniels and his cross was headed home by Daniel Purkis who had drifted in between McClean and Peers. 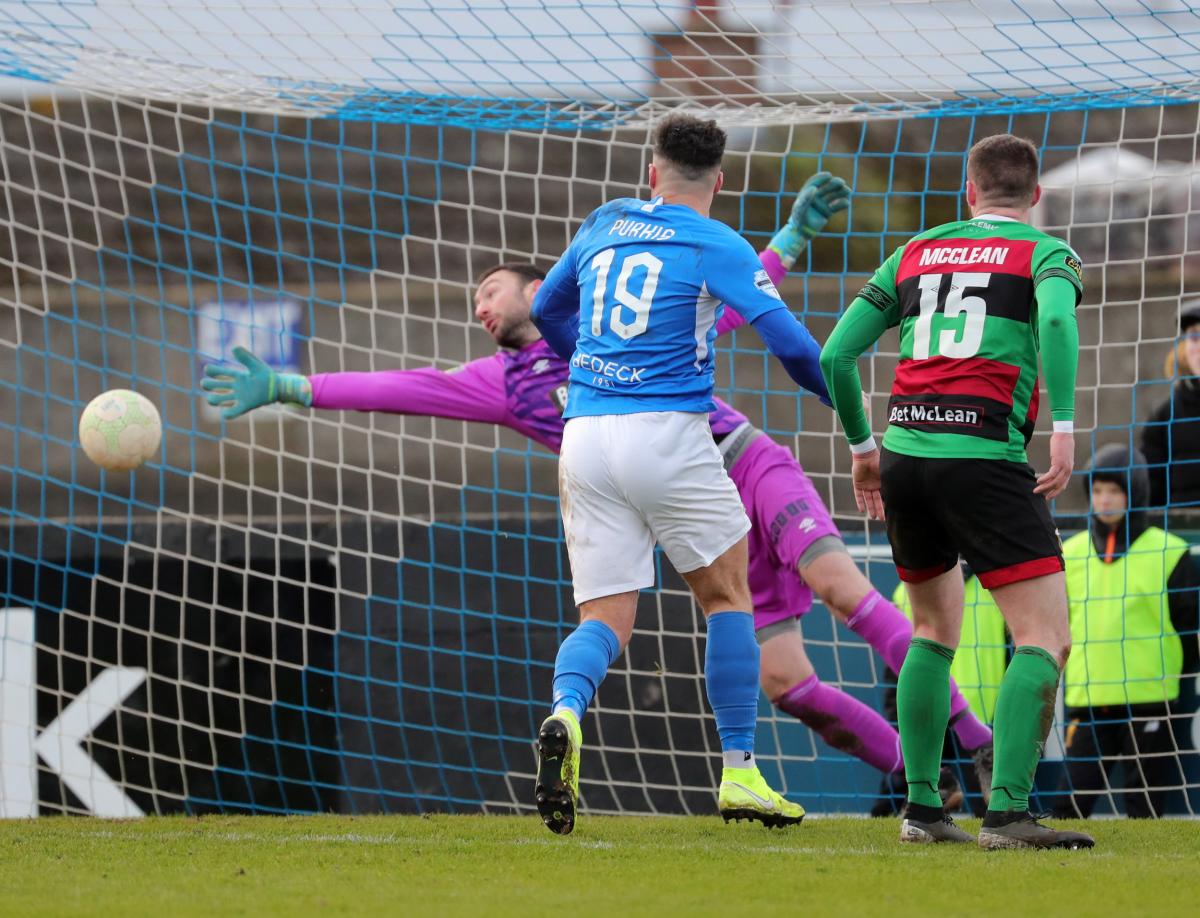 A minute after the goal Robbie McDaid broke away down the left and was recklessly taken out by Coates. Referee Andrews though saw no infringement; one of a number of bizarre decisions from the officials this afternoon! As half-time approached McDaid was unlucky to see his shot deflected over the bar for a corner and then Donnelly got on the end of a Nasseri set piece only to see his header go straight at Tuffey. 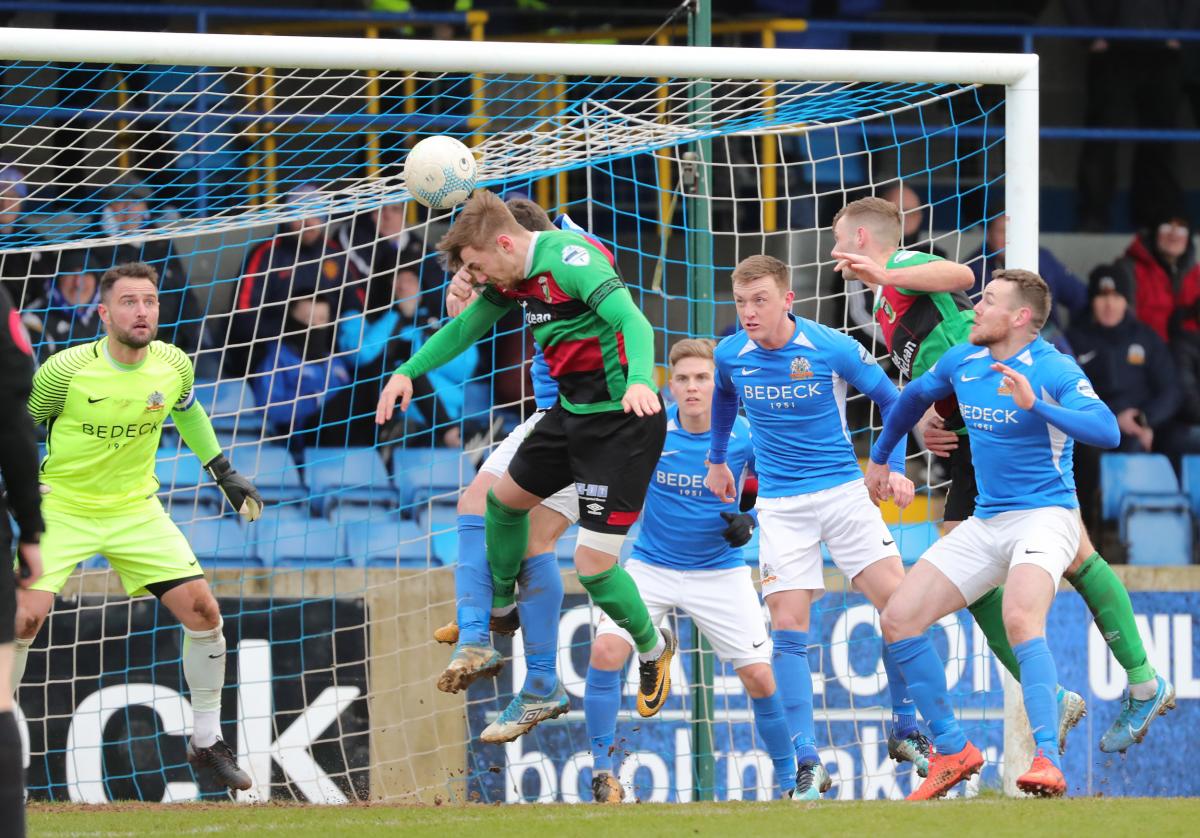 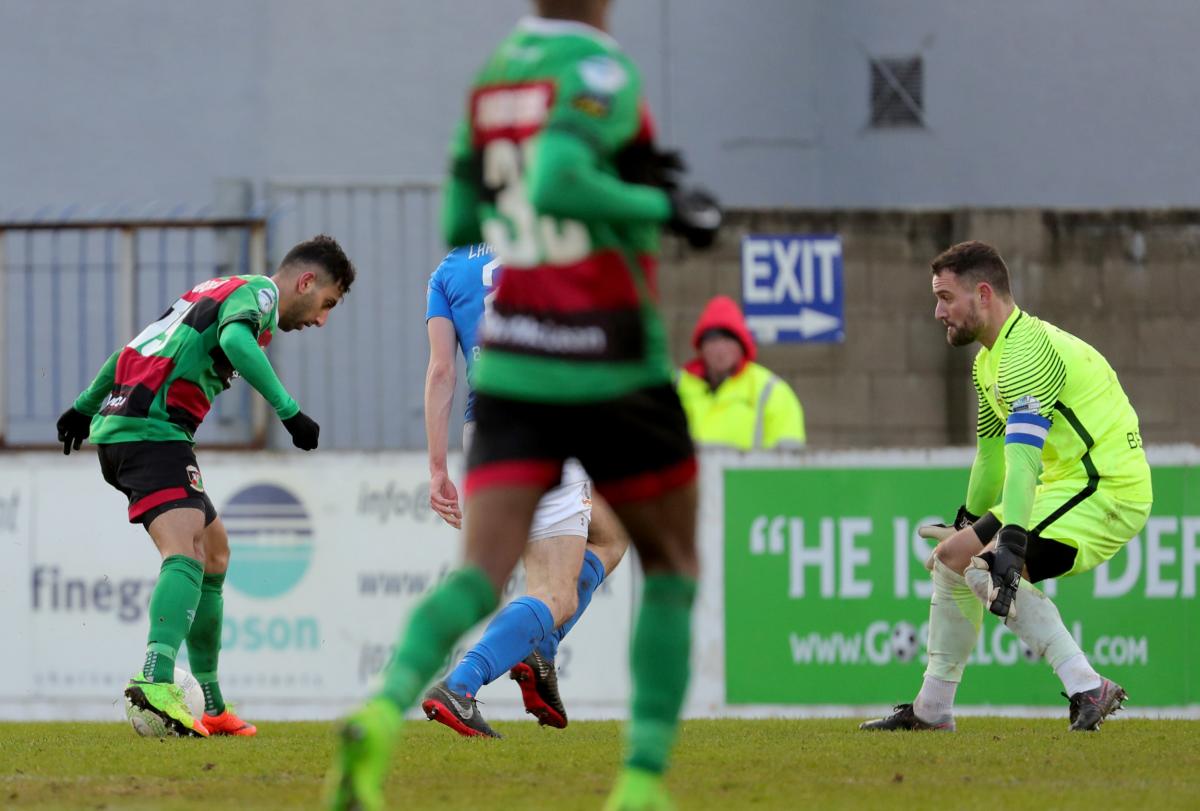 There was little action of note in the early stages of the second half but that all changed on 59 minutes. A long range effort from Daniels was punched clear by Antolovic. The ball broke to Nasseri about 25 yards from his own goal. He turned and drove forward before hitting an excellent pass to Ruaidhri Donnelly on the left. He carried the ball midway into the Glenavon half before picking out Nasseri who had continued his forward run. Picking the ball up on the edge of the area the Glentoran number19 held of Daniel Larmour before skillfully rounding Tuffey and passing the ball into the net from 6 yards. 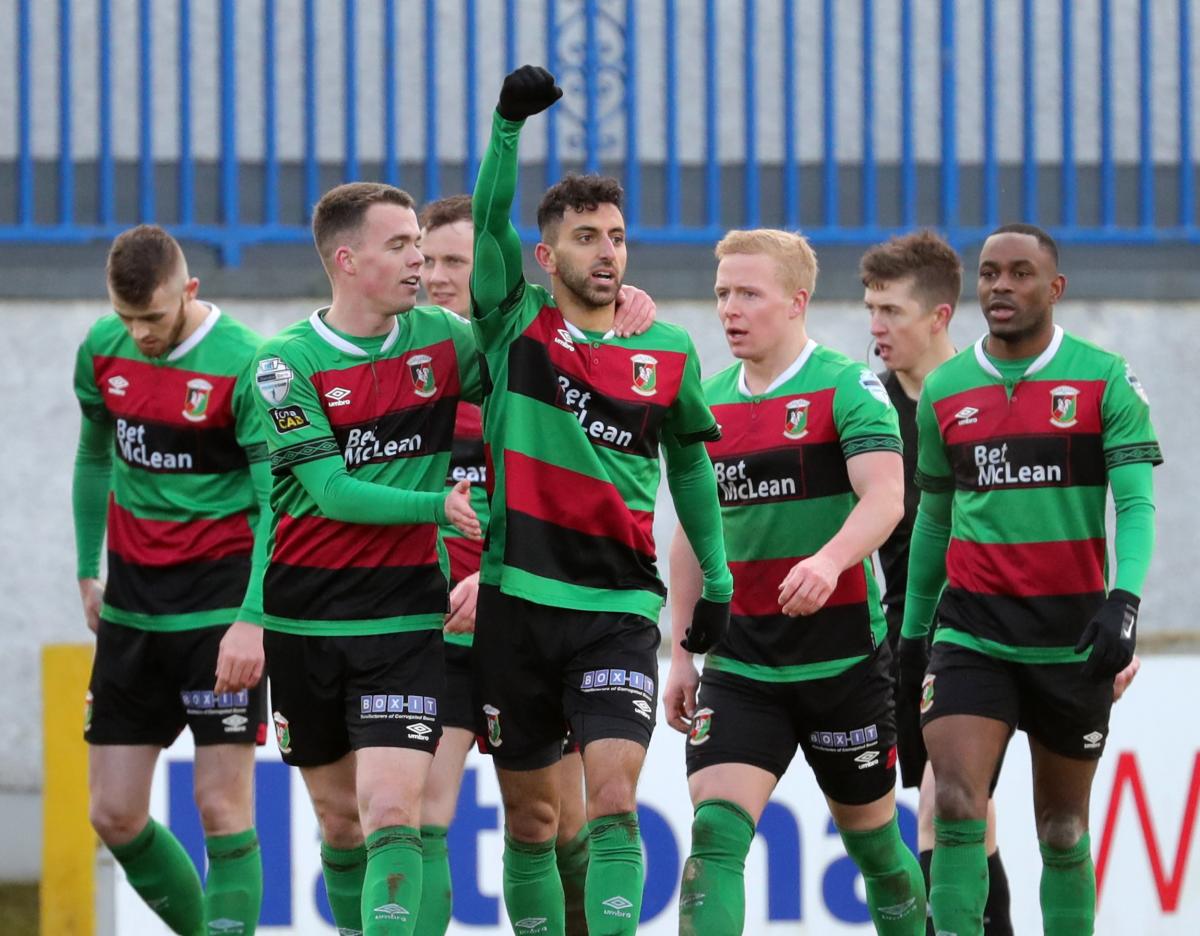 Midway through the half a shocking tackle by Coates on Van Overbeek earned the former hatchetman a yellow card. Given the earlier challenge on McDaid he was perhaps fortunate to stay on the pitch! Glenavon levelled on 71 minutes when a long hoof forward from Aaron Harmon ended up in the Glentoran net. There looked to be no danger as Marcus Kane seemed favourite to head the ball clear until he was pushed in the back by Singleton; Antolovic then having no time to react with the ball going in at the back post. Watching the replays of the 'goal' it's hard to see how referee Andrews failed to see the push on Kane. 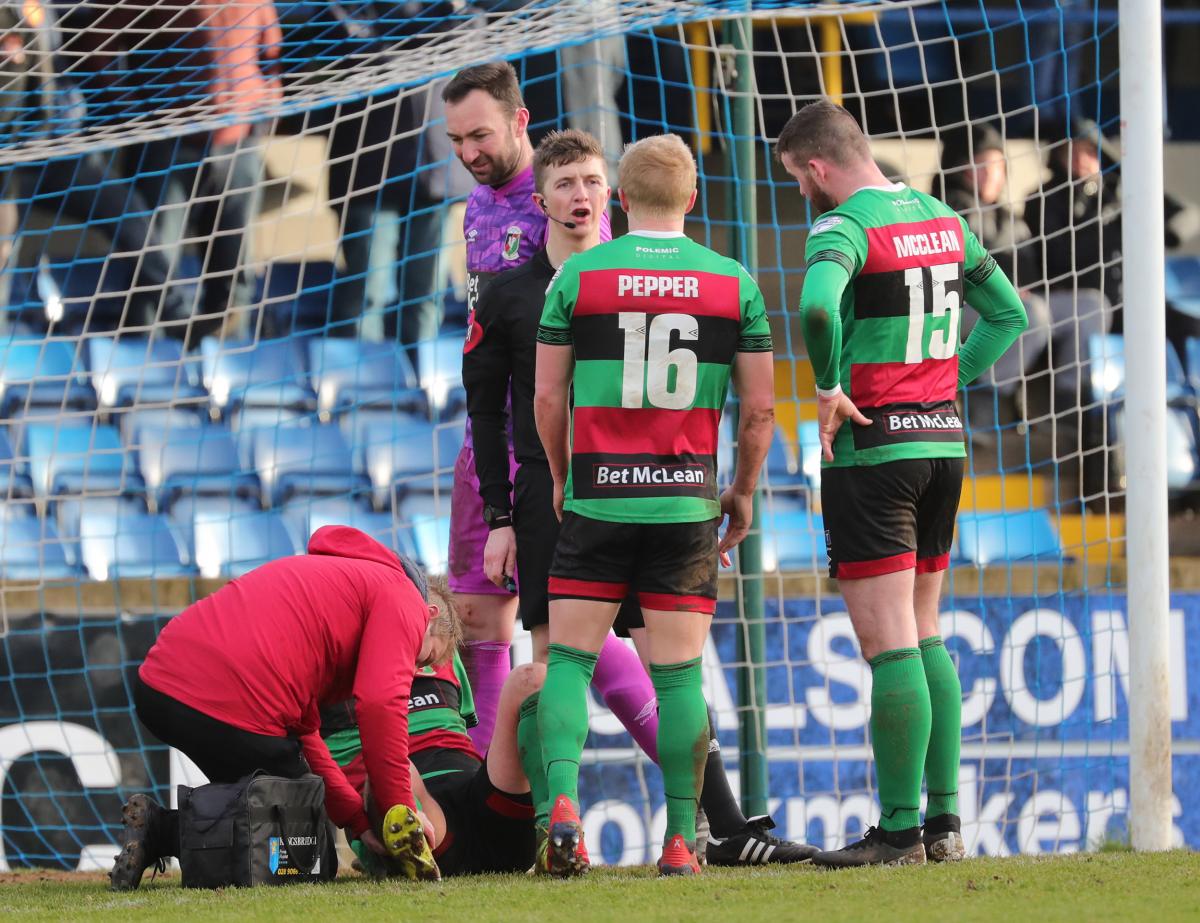 With 10 minutes remaining Glentoran went in search of a winner. Nasseri found Donnelly on the left and he crossed towards substitute, Paul O'Neill. The pass was slightly over hit but O'Neill chased it down and tried to turn the ball back across goal only for Aaron Harmon's outstretched arm to get in the way. Penalty! Navid Nasseri stepped up and fired the ball to the keeper's right hand side but Tuffey guessed correctly and turned it away for a corner. The final chance of the game fell once again to 'man-of-the-match' Nasseri on 88 minutes but a deflection of a defender from Navid's 20 yard effort too the ball wide of the goal. 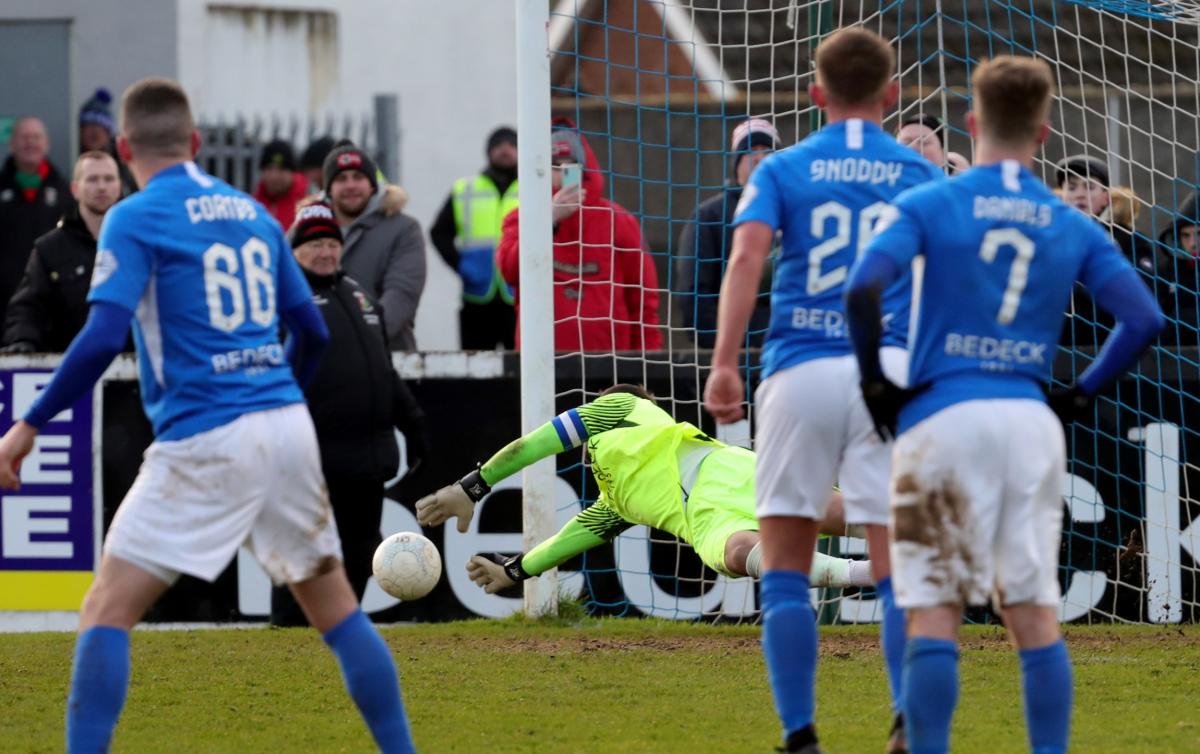 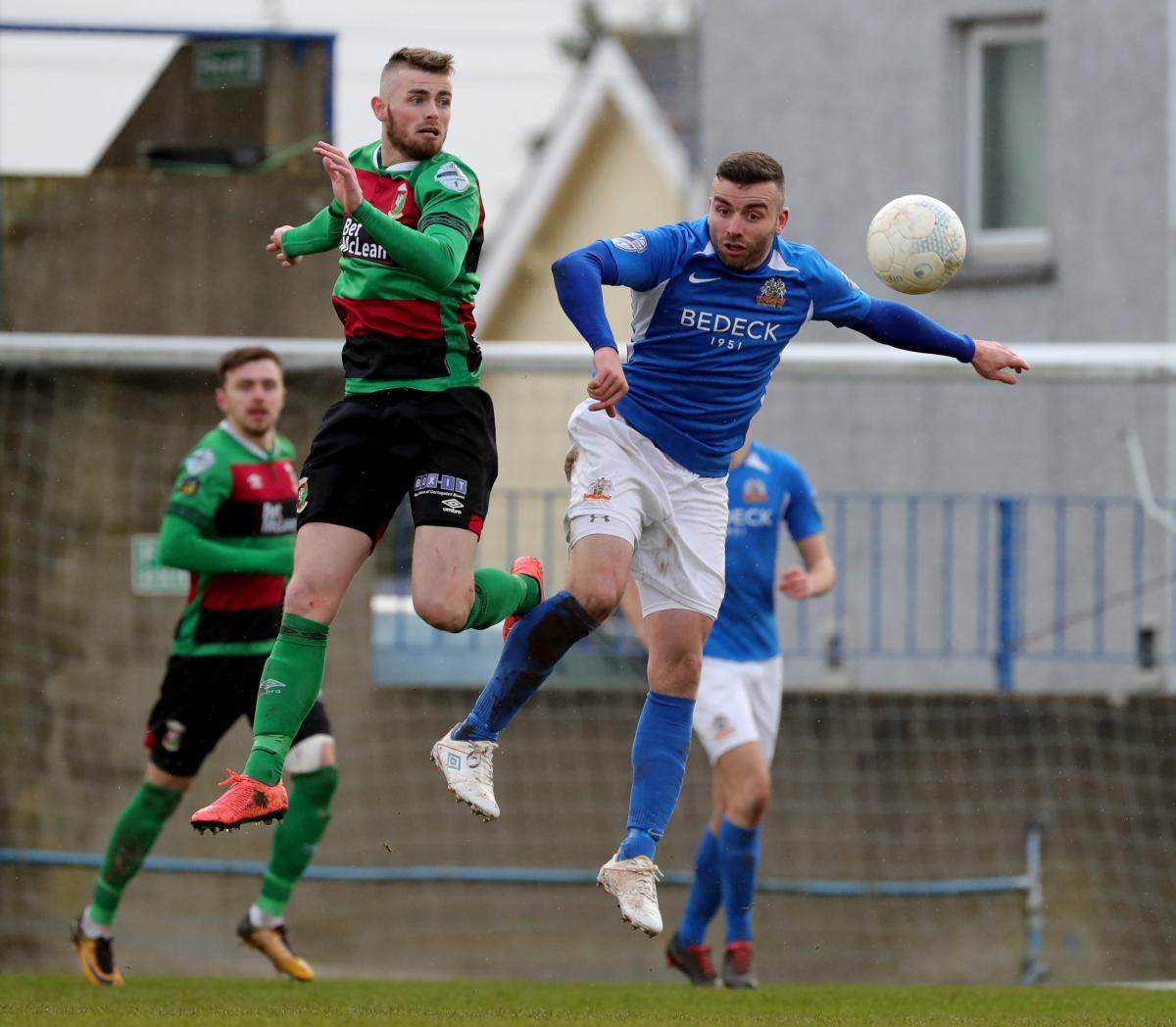 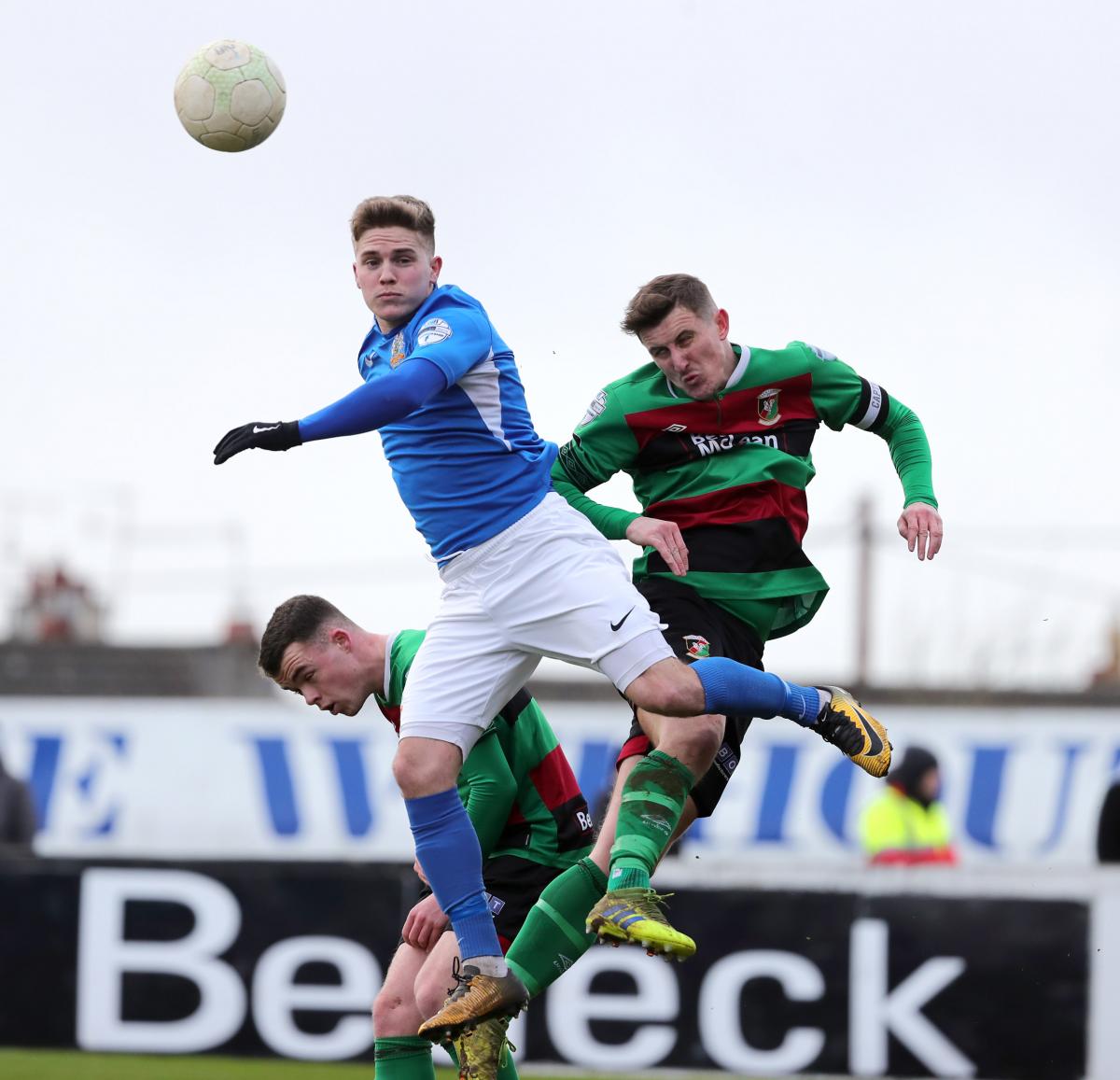