Two late Robbie McDaid goals gave Glentoran their first three point haul of the season after this thrilling encounter at the Ballymena Showgrounds. 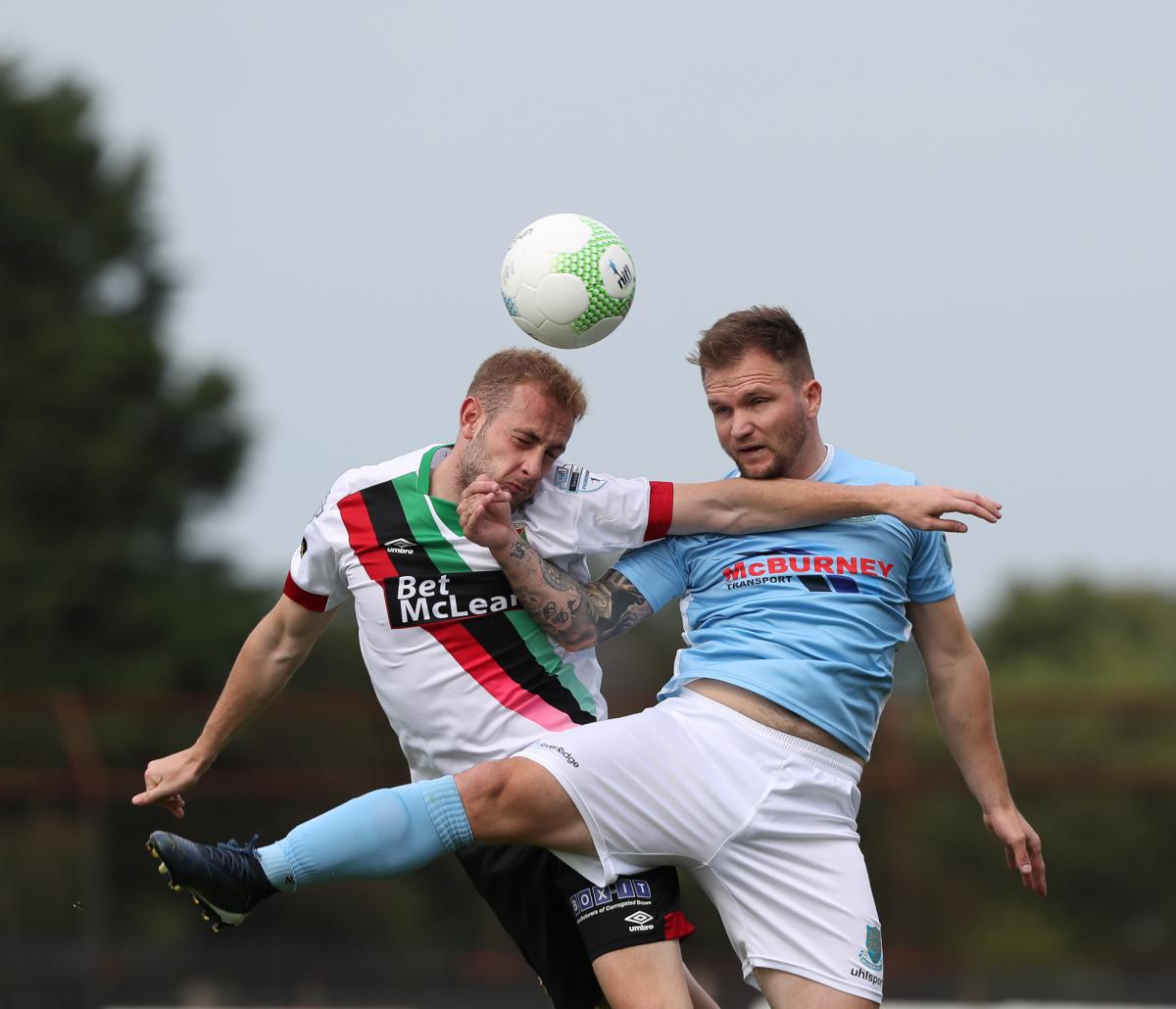 Mick McDermott made two changes to the starting line-up following last Saturday’s defeat at Dungannon, Paul O’Neill in for Thomas Byrne and Conor Pepper, making his first appearance of the season after suspension, replacing Malachy Smith at right back. 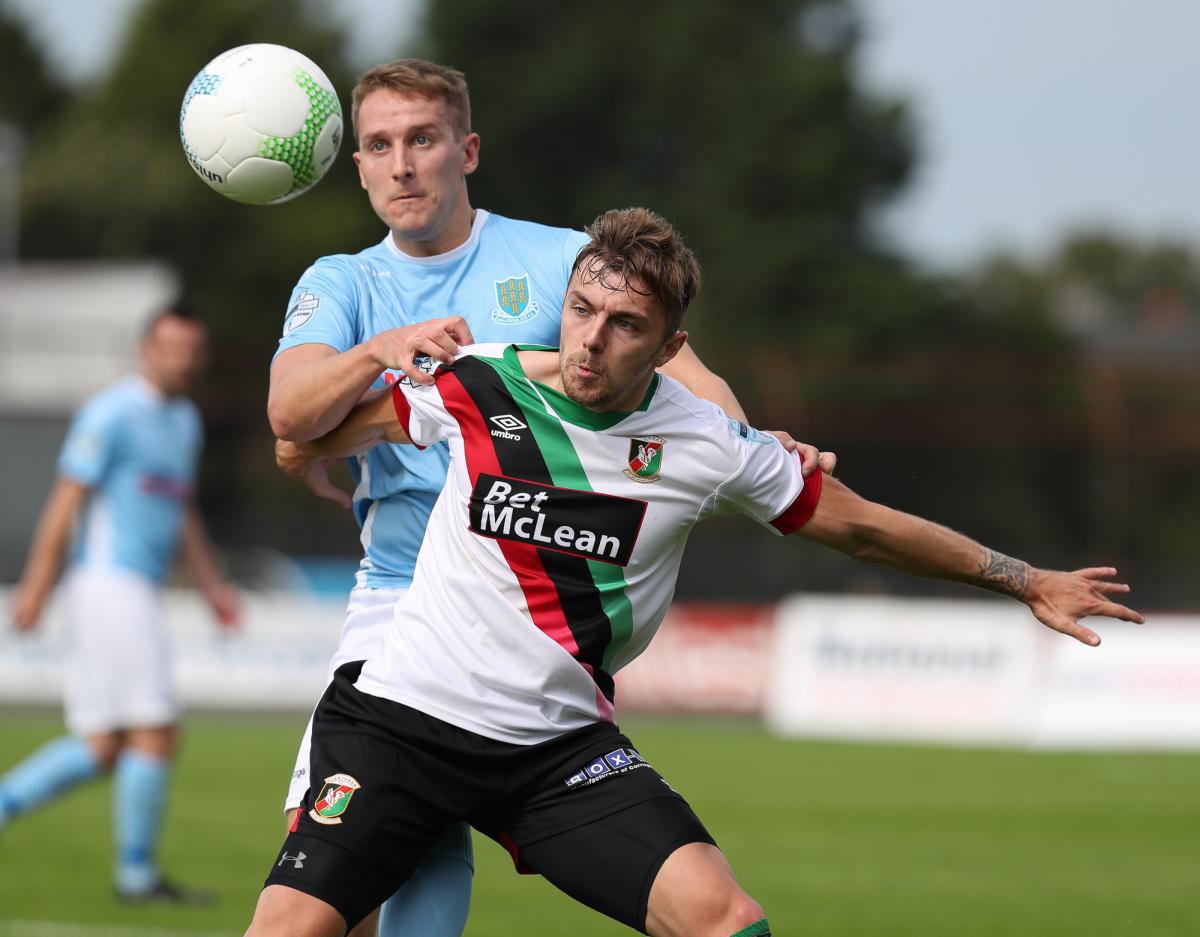 The Glens had by far the better of the first half with a chance coming as early as the sixth minute as O’Neill just failed to connect properly with Curtis Allen’s ball into the box.  The home side were conceding numerous free kicks and Hrvoje Plum’s delivery was giving their defence all sorts of problems.  Plum was proving dangerous from open play too, striking the post with a wicked effort from the corner of the box after 13 minutes, sending another whistling just wide of the other post midway through the half and striking the woodwork yet again from a free kick after 35 minutes. 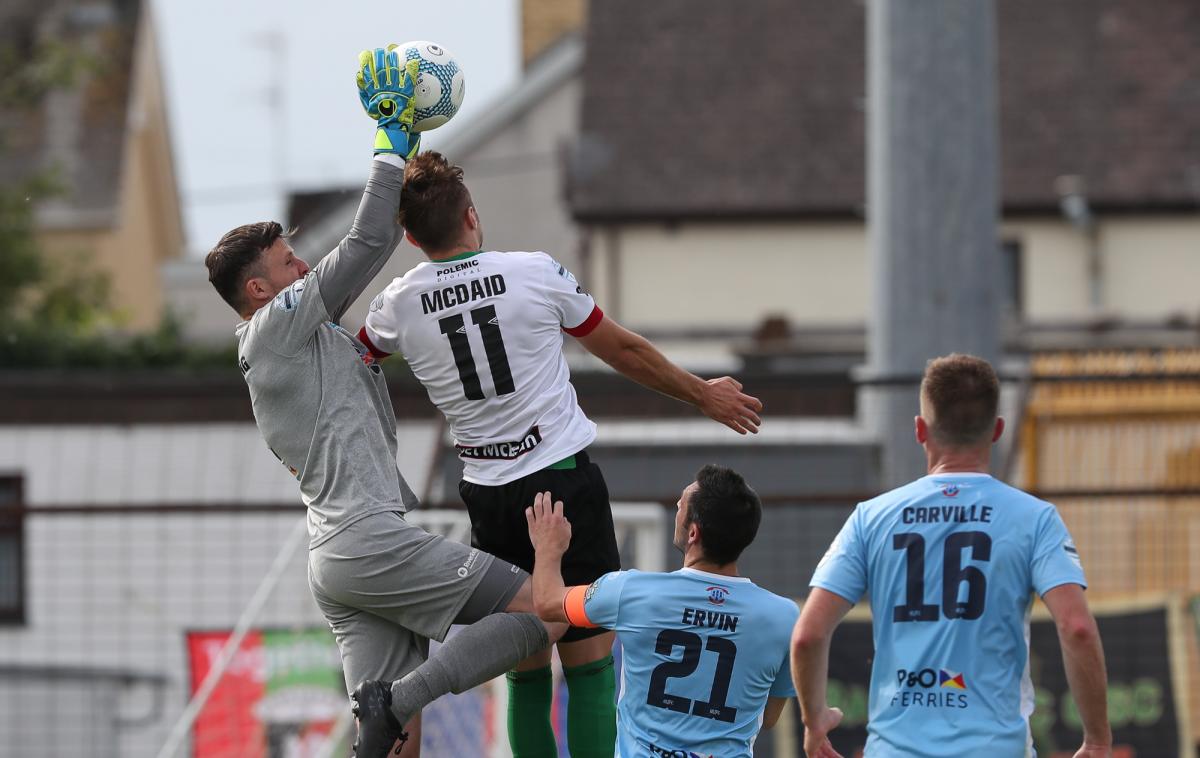 But his colleagues were not to be outdone with Robbie McDaid hooking just wide and a blistering shot from O’Neill from 20 yards bringing a top class save from Ross Glendinning in the Ballymena goal.  Marijan Antolovic in the Glentoran goal was having a quiet afternoon with any threat from the home side easily snuffed out by his back four, with Patrick McClean looking particularly assured.  The Glens kept pressing for the opening goal and almost grabbed it right on the half time whistle as Allen’s audacious overhead effort drifted just wide.
Half time 0-0 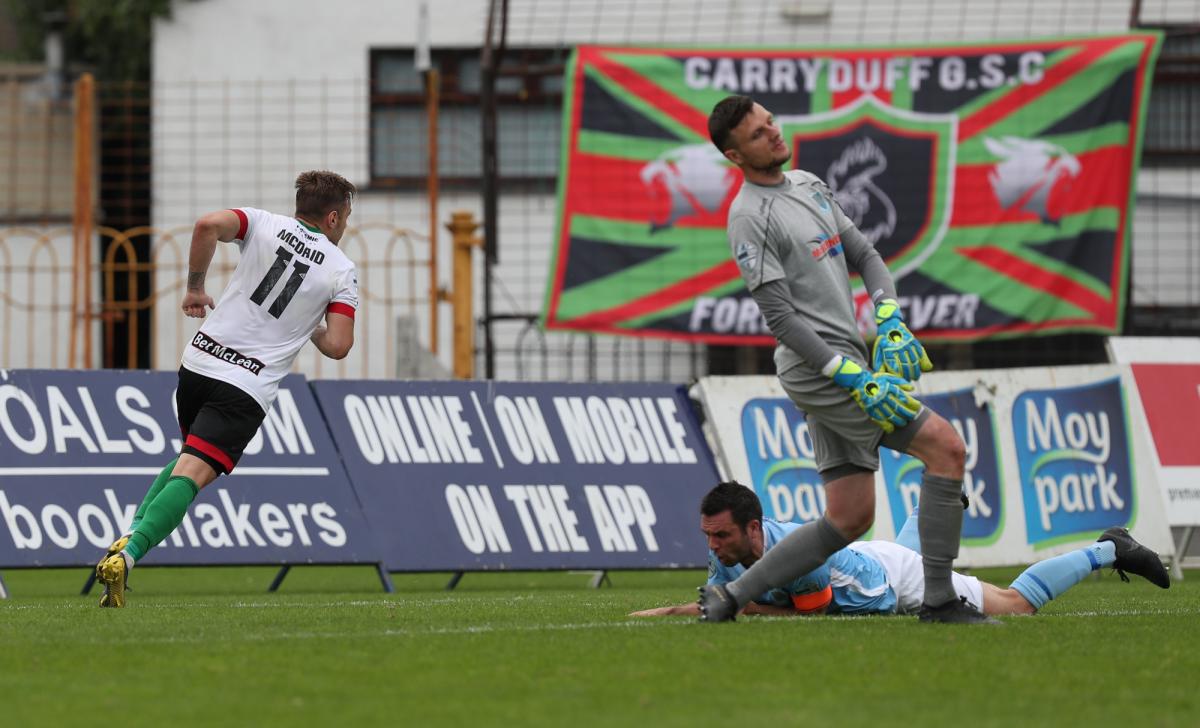 While the Glens had dominated proceedings thus far they had nothing to show for their efforts and received a wakeup call just four minutes after the break when Andrew McGrory drifted unnoticed behind the back four and sent a header off the crossbar.  Things were to get worse soon afterwards, and it was McGrory once again, sending a superb free kick from twenty yards into the top corner giving Antolovic no chance.
With this fillip Ballymena began to create more, Jonny Addis firing over from inside the box when he should have hit the target and Cathair Friel twice going close, bringing a smart save from Antolovic and seeing another effort slip just wide.  The Glens were dealt a further blow with the impressive McClean forced off through injury, being replaced by Calum Birney. 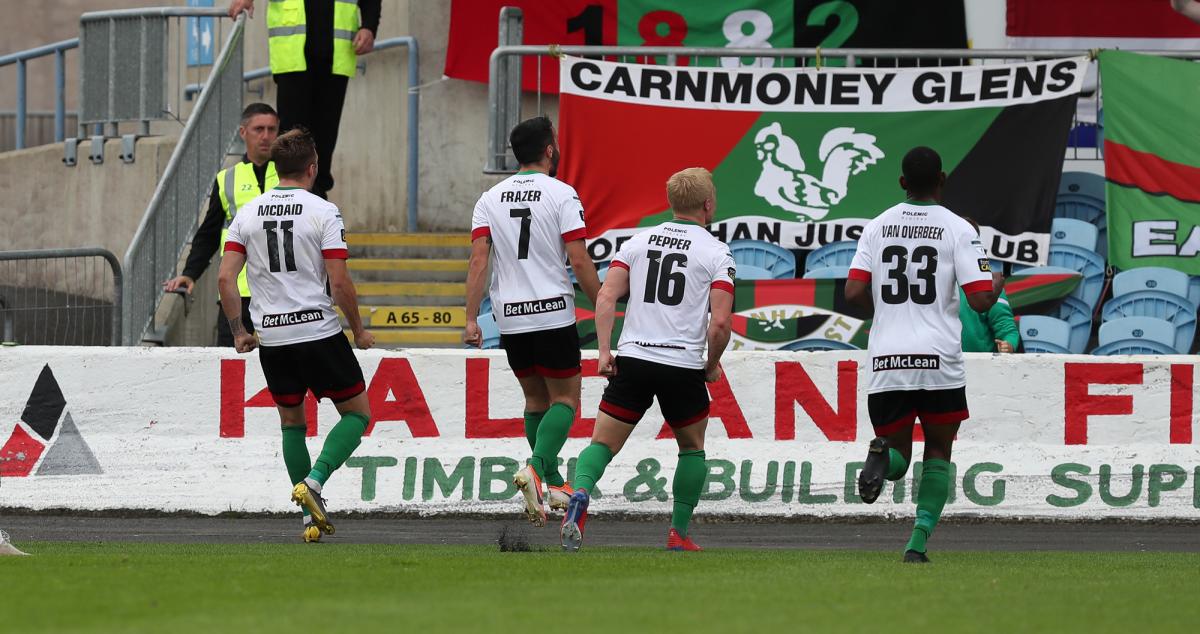 The visitors were at this point failing to create anything of note but a double substitution midway through the half, Jonny Frazer and Elvio van Overbeek replacing Paul O’Neill and Curtis Allen, saw things start to swing back in our favour.  The pace of both players began to cause the Ballymena defence all sorts of problems but it looked like it wasn’t going to be our day when, with seven minutes left, van Overbeek won a race for the ball in the box but his low effort clipped agonisingly off the outside of the post.  But the Glens were not to be outdone and just a minute later Frazer flicked a header in to Robbie McDaid who held off his marker to poke home the equaliser. 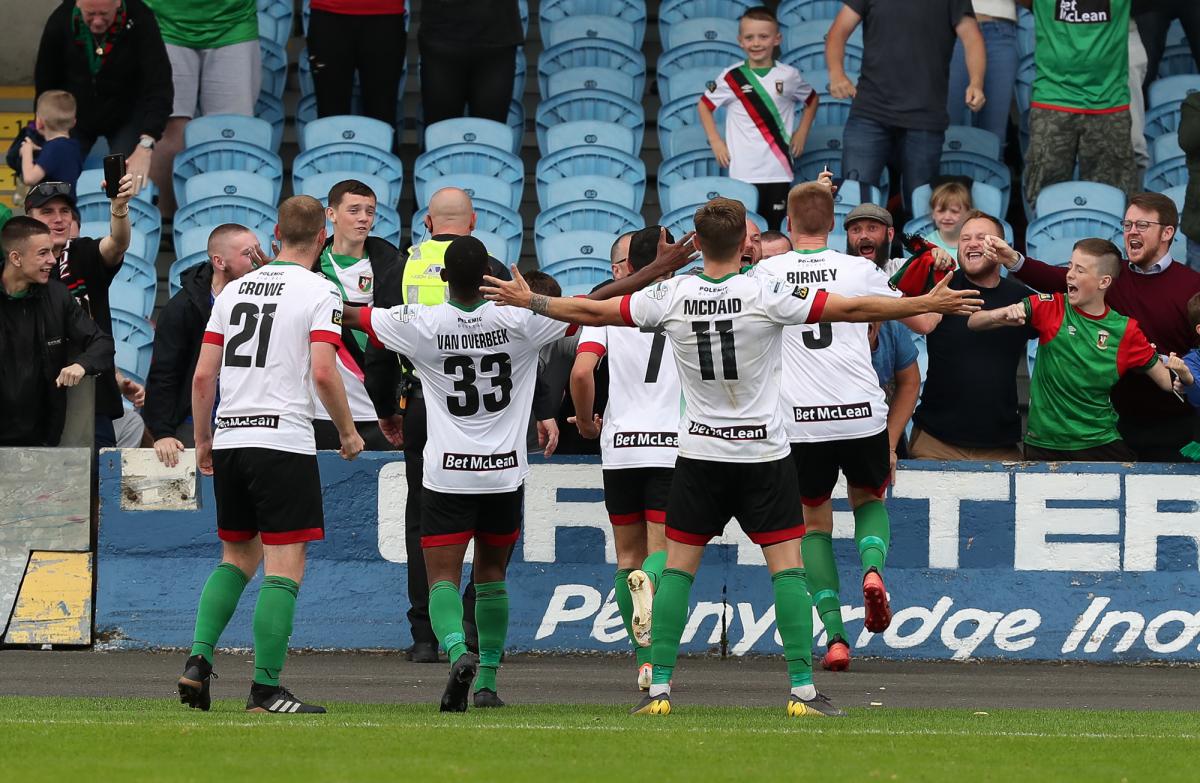 The visiting players, along with the fans, very much had their tails up now and pressed forward for the winner, but almost got caught with a sucker punch on the break as referee Andrew Davey waved play on after a challenge on Frazer with everyone else in the ground expecting a free kick.  Then deep into the three minutes of stoppage time van Overbeek found space on the right, crossed for McDaid who got the break of the ball to swivel and fire home the winner with virtually the last kick of the game.

So the Glens record their first win of the season, a fully deserved one which they will hope to build upon as we now look forward to four consecutive games at the Oval, beginning with Ballyclare Comrades in the Bet McLean League Cup on Tuesday.