Glentoran left it late to claim all three points against a Portadown side who were down to nine men before half time.  Playing down the Shamrock Park slope the home side had the better of the opening exchanges, but their task was made much more difficult when centre back Gary Breen got his marching orders after just ten minutes.  As the players jockeyed for position as they awaited a Portadown corner Breen head butted Jay Magee right under the nose of referee Davy Malcolm who immediately produced the red card.  However the Glens’ numerical advantage seemed to have little effect on the game as Portadown continued to have the greater share of possession, although both Colin Nixon and Andy Waterworth came close with a couple of half chances.

On the half hour mark Portadown took the lead; the dangerous Kevin Braniff sent in a low cross from the left and Darren Murray nipped in ahead of Magee to score from close range.  Soon afterwards Elliott Morris did well to save with his legs from McNeill, but four minutes from the break Portadown doubled their lead.  Once again a cross from the left, this time from Ross Redman, caught the Glentoran defence napping and Murray had the easy task of registering his second of the game.  Things looked bleak for the Glens, but just a couple of minutes later they were right back in it.  Stephen Carson found Andy Waterworth twenty yards from goal and the Glens’ leading scorer turned and fired an unstoppable left foot shot into the top corner past Portadown ‘keeper David Miskelly.  And that wasn’t to be the end of the first half action.  With a minute of the first period left Darren Murray got involved in an off the ball incident with Jay Magee and referee Malcolm, on the advice of his assistant, showed the second red of the game to the Portadown number nine.

At half time Eddie Patterson changed the shape of the side to try to take advantage of our weakened opponents, bringing off midfielder David Howland to allow young striker Carl McComb to join Waterworth up front.  Inevitably the Glens enjoyed the lion’s share of the possession and came close to levelling when Richard Clarke had a shot blocked just after the restart and Waterworth had a close range effort well saved by Miskelly on fifty three minutes. However as the half wore on things became more and more frustrating for the visiting players and supporters, the nine men’s stubborn resistance coupled with some poor final passes from the visitors resulted in few clear cut chances and it looked like Portadown were going to hang on.

Then with just seven minutes left the breakthrough came as Mark Clarke headed home a close range equaliser from Stephen Carson’s left wing corner.  The sense of relief in the away stand was palpable but time was fast running out.  With eighty seven minutes on the clock substitute Jim O’Hanlon outfoxed McNeill in the Portadown area and was brought down as he headed for the bye line.  After what seemed like an eternity referee Malcolm pointed to the spot and after some delay Jay Magee stepped up to dispatch his third penalty of the season low to Miskelly’s right and spark much celebration in the visitors’ stand.  To Portadown’s credit they pushed forward in search of an unlikely equaliser in the dying minutes, a couple of runs from Braniff causing some nervy moments in the Glens’ defence.  The resulting gaps in the home rearguard allowed Stephen Carson to break clear three minutes into stoppage time and his cross from the left found McComb.  The young striker calmly controlled and sent a delightful chip over Miskelly to grab his first goal for the senior team and round off an eventful afternoon in Mid-Ulster. 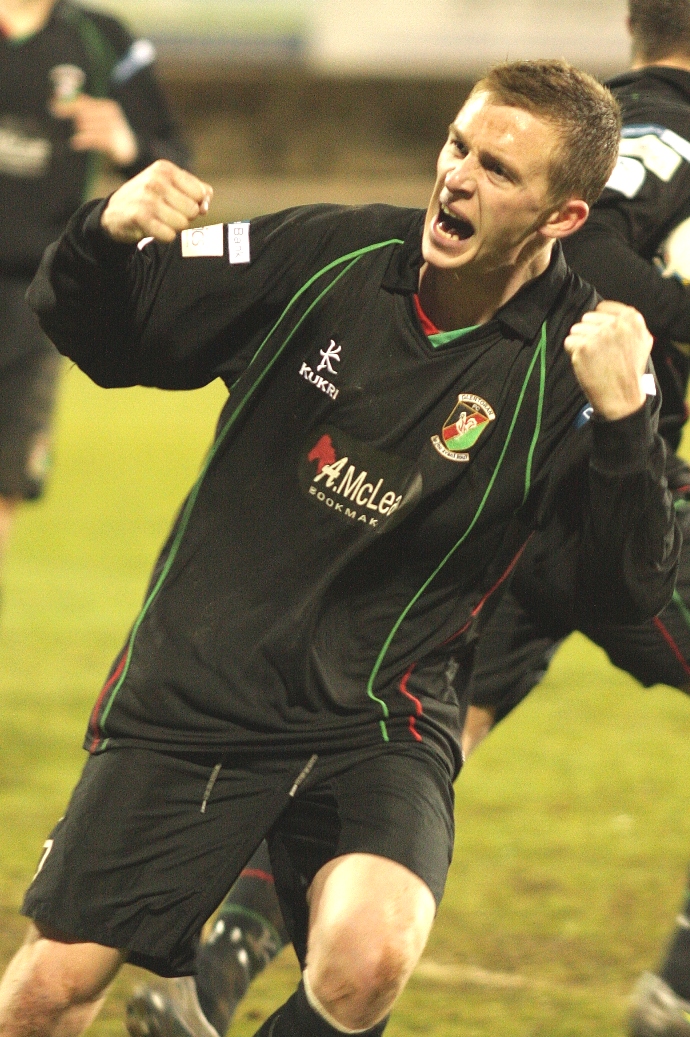