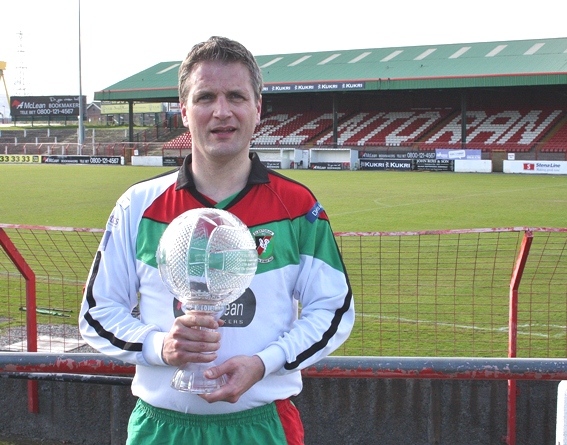 The script couldn’t have been written better in this final League game of the season as Glentoran legend Colin Nixon came off the bench to score a late equaliser in his final game at the Oval for Glentoran.  Nicky had made his way to the dugout before the game via a guard of honour from both teams hoping to be given the chance to make his 793rd appearance for his beloved Glens.

The fare on offer in the first half was predictably low intensity stuff with Coleraine having little to play for and the Glens with Cup final places up for grabs but perhaps wary of picking up injuries.  Neither ‘keeper was tested in the opening quarter with the only action of note being a Marcus Kane shot over the bar and a Coleraine free kick from Ruairi Harkin curling just wide.  However on twenty minutes the visitors took the lead; Coleraine’s leading scorer Curtis Allen made space for himself on the left and fired low across the six yard box to the far post where Stephen Lowry was lurking and he couldn’t miss from point blank range.  The Glens almost levelled matters just four minutes later when Jason Hill’s left wing cross found Marcus Kane and his looping header had Coleraine goalkeeper Michael Doherty beaten but the ball came back off the cross bar.  The rest of the first half continued to be rather turgid although former Glentoran winger David Scullion fired just over after some good work by Coleraine Gareth Tommons.

Five minutes after the break the visitors almost doubled their lead.  From a Lowry corner Kyle McVey’s header was cleared off the line by Jason Hill but McVey followed up the rebound and his second attempt with his head came back off the bar and was cleared to safety.  At the other end there was another close call when Stephen McAlorum’s free kick was headed back across goal by Jay Magee but Lowry did brilliantly to block Andy Waterworth’s close range header.  Once again the play deteriorated to the mediocre but on sixty nine minutes the crowd was given a lift when Eddie Patterson made the substitution that all the home fans wanted to see as Nixon made his entrance in place of Jay Magee.

Glentoran’s record appearance holder took the captain’s armband from Elliott Morris, was soon carrying the ball forward and indeed forced Doherty into one of the few saves that he had to make all afternoon.  With two minutes left on the clock he fed fellow substitute Jim O’Hanlon in the Coleraine area who in turn slipped the ball through to Waterworth on the bye line.  He chipped his cross to where Nixon had continued his run to the far post and, despite a slightly awkward bounce, he twisted to volley into the back of the net for his 88th goal for the Glens.  Never has an equaliser in a dead rubber League game been greeted with more delight and the celebrations both on and off the pitch were both long and loud.  The Glens could even have snatched a winner in the dying seconds.  Following a Coleraine corner the home side broke away with Stephen Carson eventually feeding Richard Clarke in acres of space but his shot brought a comfortable save from Doherty.

When the final whistle went Nixon was presented with a gift from Glentoran chairman Terence Brannigan and the fans stayed behind to applaud him off the pitch; a fitting send off for one of Glentoran’s and the Irish League’s all time greats.  And next week....who knows? 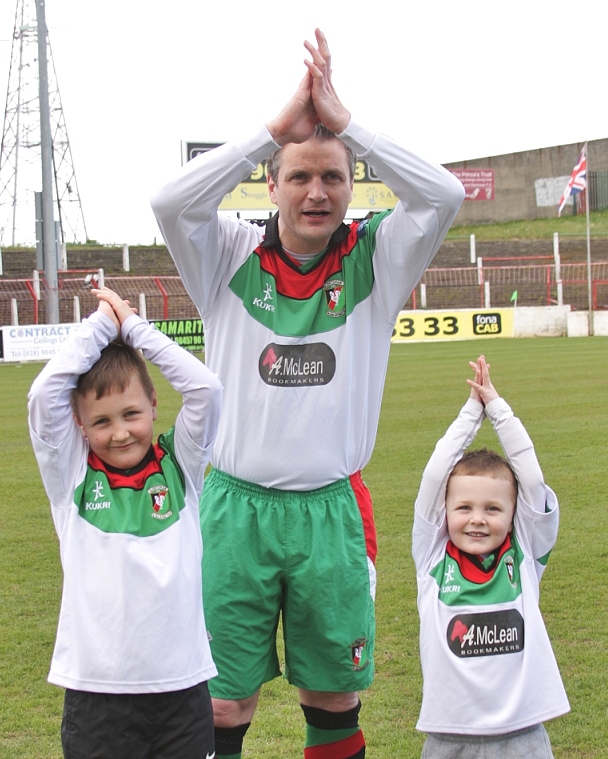