Goals from Niall McGinn and Jay Donnelly (2) gave 10 man Glentoran victory at the Newry City Showgrounds in today's Danske Bank Premiership fixture. In what was Rodney McAree's first game in charge of the East Belfast side, we made a great start and led 2-nil at the interval. An early Newry City goal in the second half, quickly followed by the dismissal of Paddy McClean threatened to derail the Glens but following a second Jay Donnelly goal the team dug in and thoroughly deserved to come away with the 3 points. There was just one change to the XI who began the game against Larne a week ago; Aaron Wightman coming in to replace Rory Donnelly. Despite very heavy conditions, Glentoran made a confident start to the game. On 4 minutes a great through ball from Shay McCartan found Jay Donnelly in the area but Ryan McGivern was on hand to turn the ball behind for a corner. Bobby Burns' corner fell kindly for Rhys Marshall in the box but his powerful shot was blocked by the City defence. Former Manchester City player, McGivern was then lucky to escape a card following a body check on Shay McCartan. Niall McGinn took the resulting free kick from which Terry Devlin headed wide of the post. 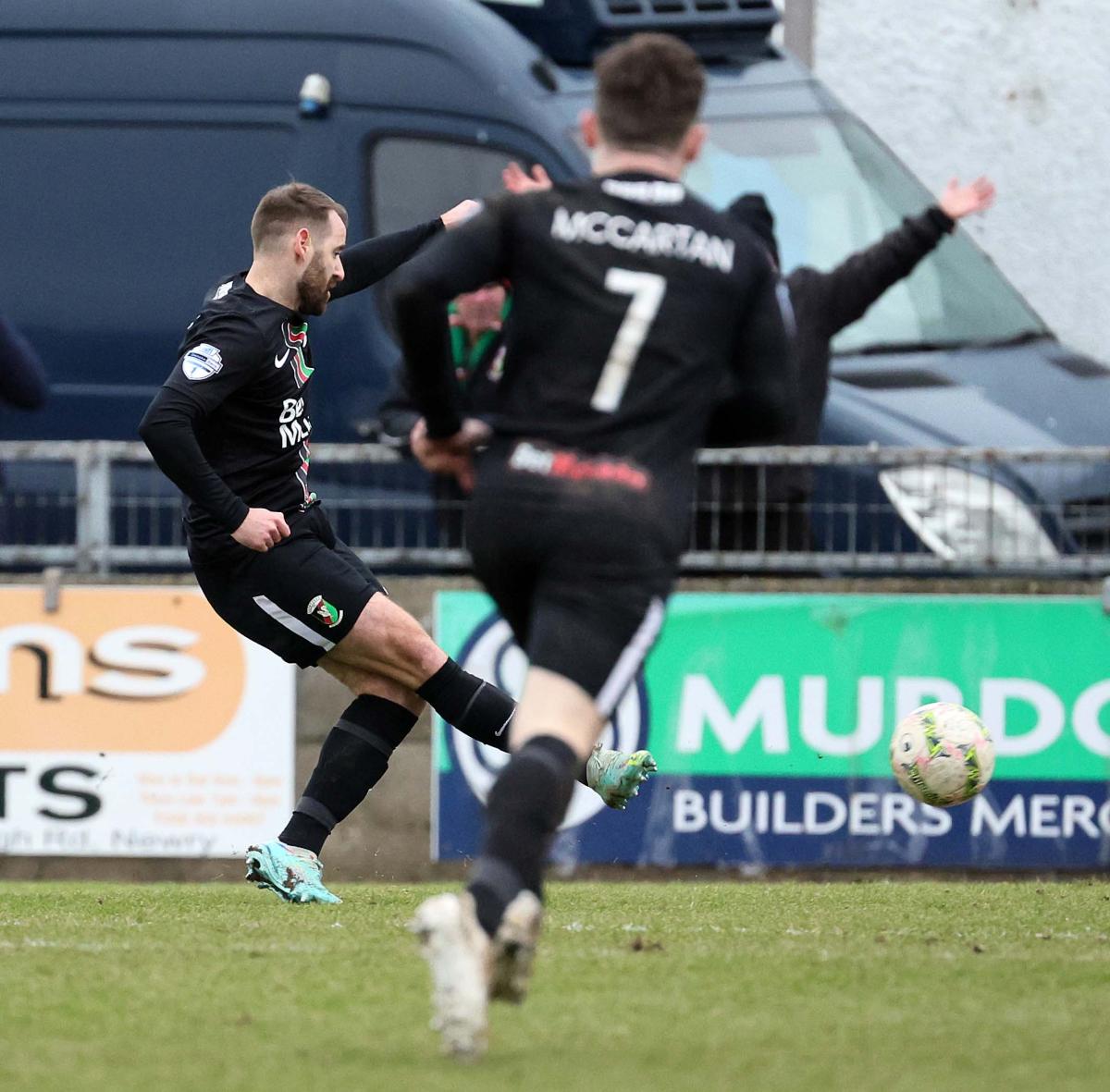 Glentoran edged in front on 7 minutes. Bobby Burns found Niall McGinn on the halfway line. He attempted to find Jay Donnelly but the ball ran through to Ryan McGivern. His attempted clearance was charged down by Bobby Burns and the ball broke kindly for Niall McGinn who skipped into the area before slotting it past Steven Maguire. On 11 minutes Jay Donnelly forced another corner. Goalscorer McGinn took it and picked out Paddy McClean in the area but his header went wide of the target. Moments later there was yet another chance for the dominant Glens with Shay McCartan's 25-yard strike bringing a decent save out of Maguire. 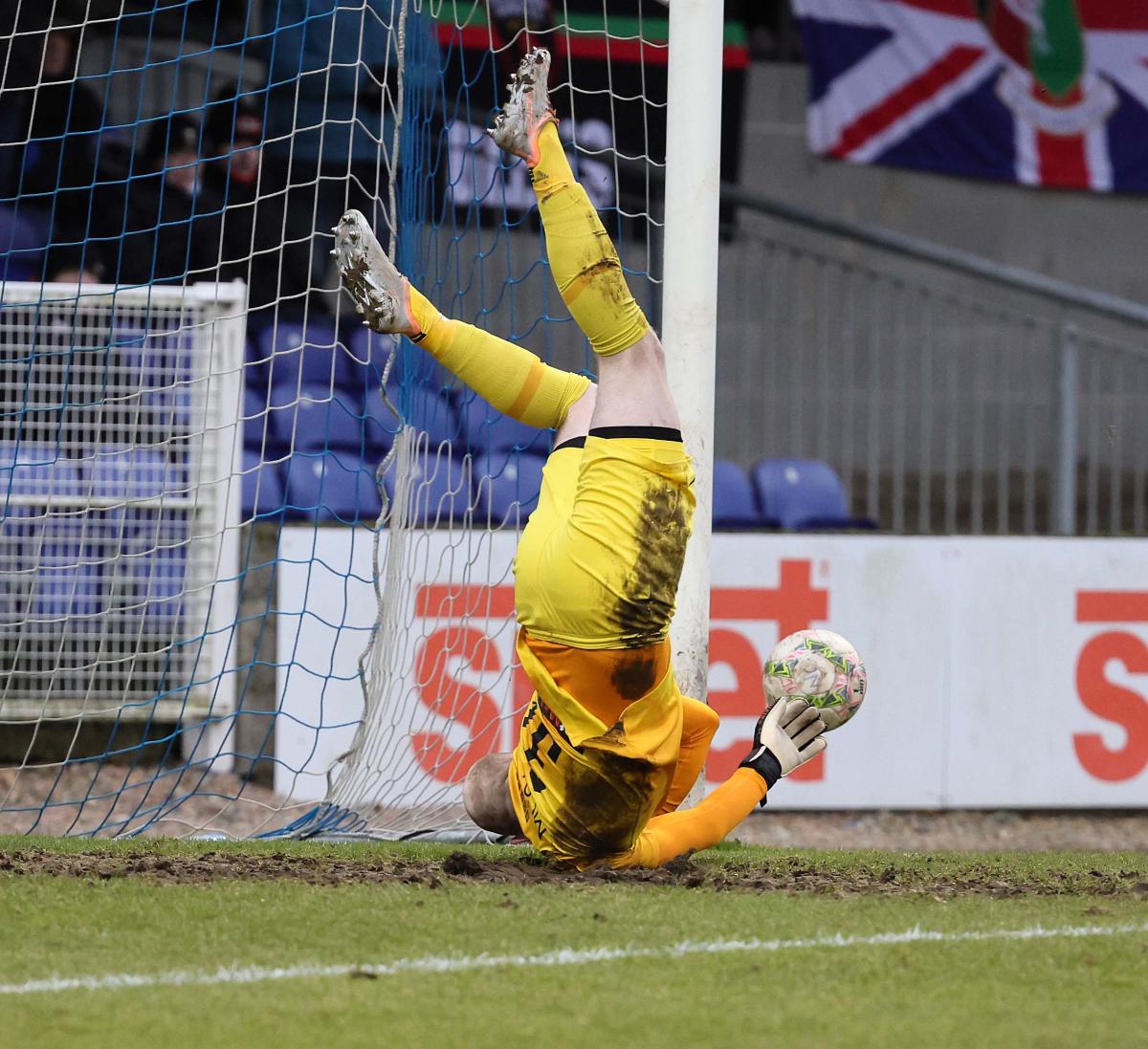 At the midway point of the first half Newry City almost snatched an equaliser! A shot from just outside the area took a wicked deflection and Aaron McCarey, initially moving to his right, managed to change direction and turn the ball round the post. A superb stop! Just before the half hour mark Aaron Wightman forced Noel Healy to concede a corner. Bobby Burns took it and found Paddy McClean who headed goalwards. The ball reached Shay McCartan who hooked it just over the crossbar from close range. A great long pass from Luke McCullough then found Jay Donnelly. Jay set up Niall McGinn who saw his shot blocked but the ball ran to Shay McCartan who fired just wide. 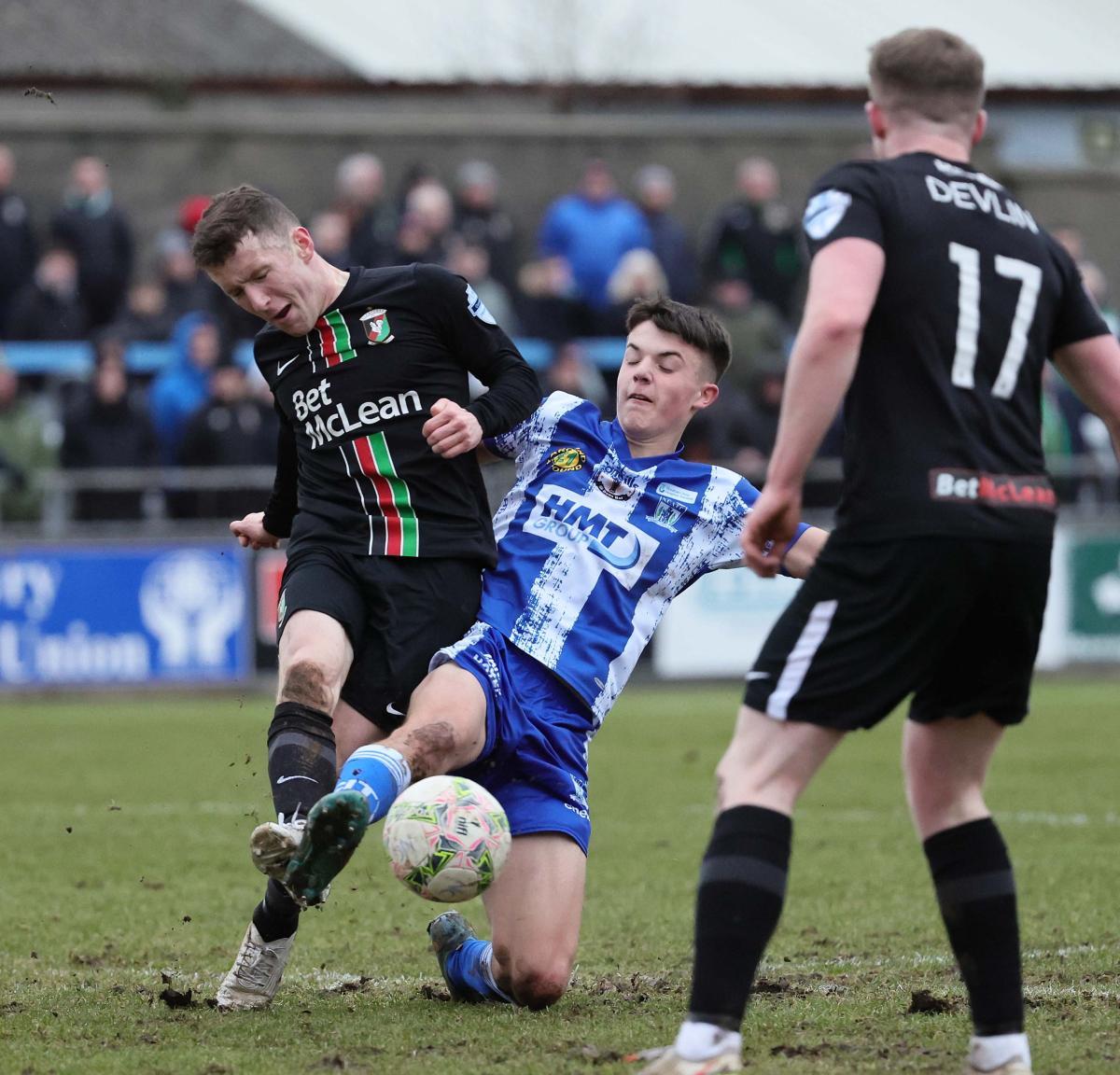 Despite Glentoran's dominance, Newry City were still looking dangerous with several counter attacks however the final ball let them down on most occasions. It was 2-nil on 41 minutes with Jay Donnelly producing a 'Goal of the Season' contender. Bobby Burns robbed Thomas Lockhart in midfield and the ball broke to Jay Donnelly. He looked up and seeing Steven Maguire standing out around his penalty spot, went for goal from around 40 yards. Jay struck the ball beautifully and it sailed over the helpless City keeper and into the net. 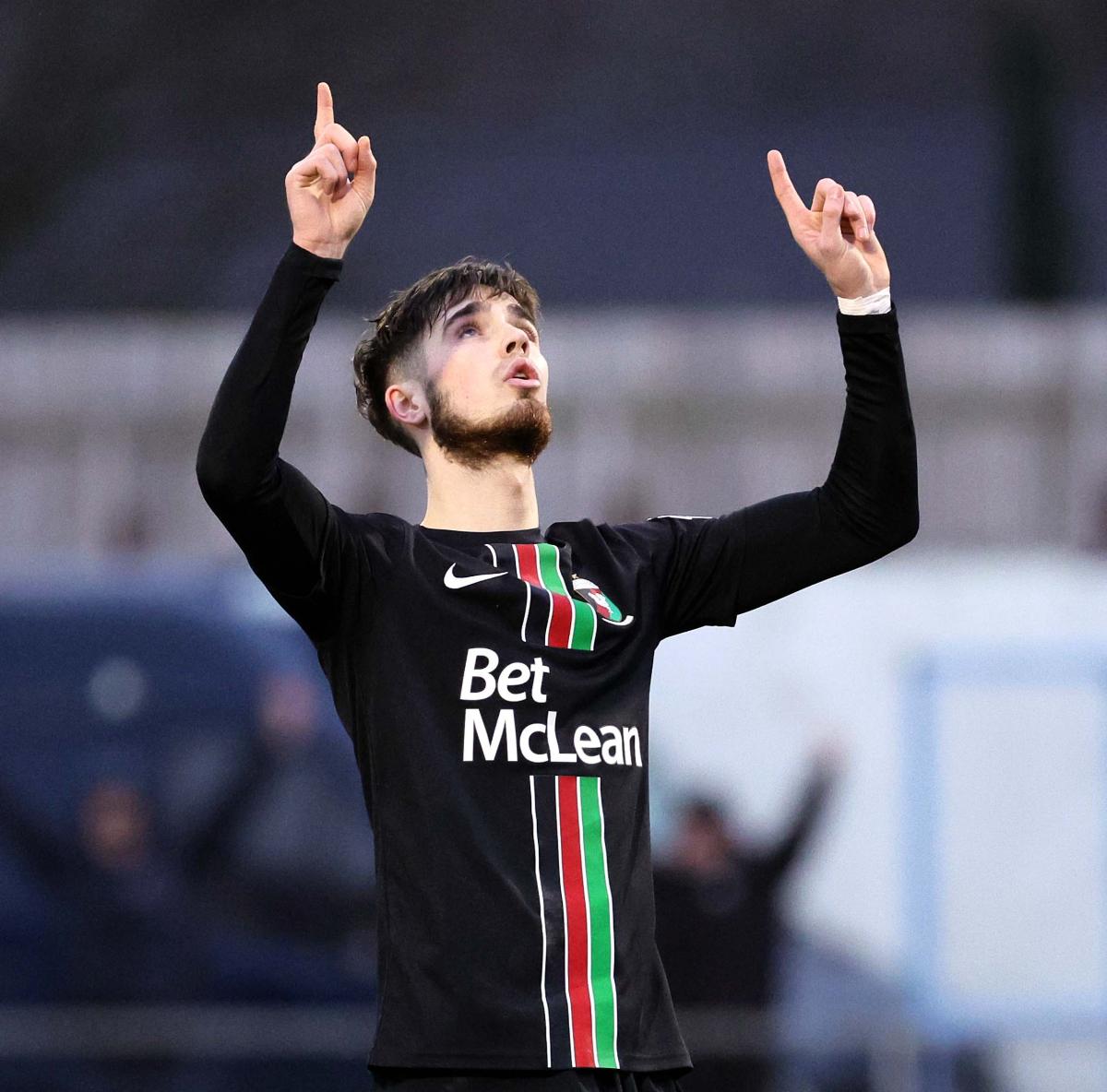 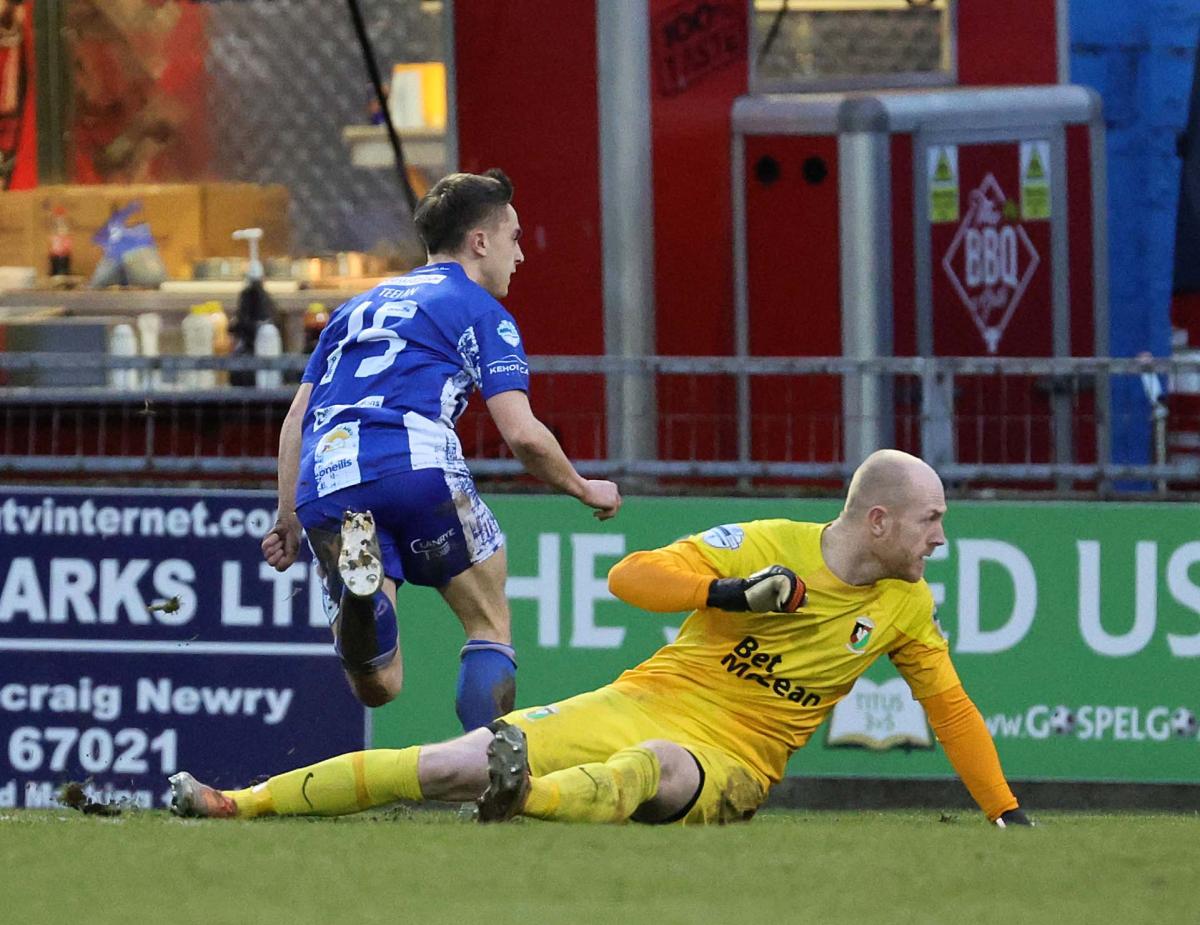 The second half was just 2 minutes old when Newry City pulled a goal back. Thomas Lockhart got the better of Terry Devlin in the centre circle before slotting a great ball between Rhys Marshall and Luke McCullough for James Teelan to run on to. City's number 15 then calmly slotted the ball past Aaron McCarey from the edge of the box. Glentoran immediately looked to restore their 2-goal advantage and Maguire was forced to make a great save from Niall McGinn. Ryan McGivern just beat Jay Donnelly to the follow up and hacked the ball clear. A slip by Paddy McClean midway inside his own half saw James Teelan break clear with a chance to level things up. McClean pulled him back though and referee Tavinder rightly produced a red card. James Teelan took the free kick but it was a comfortable save for McCarey. 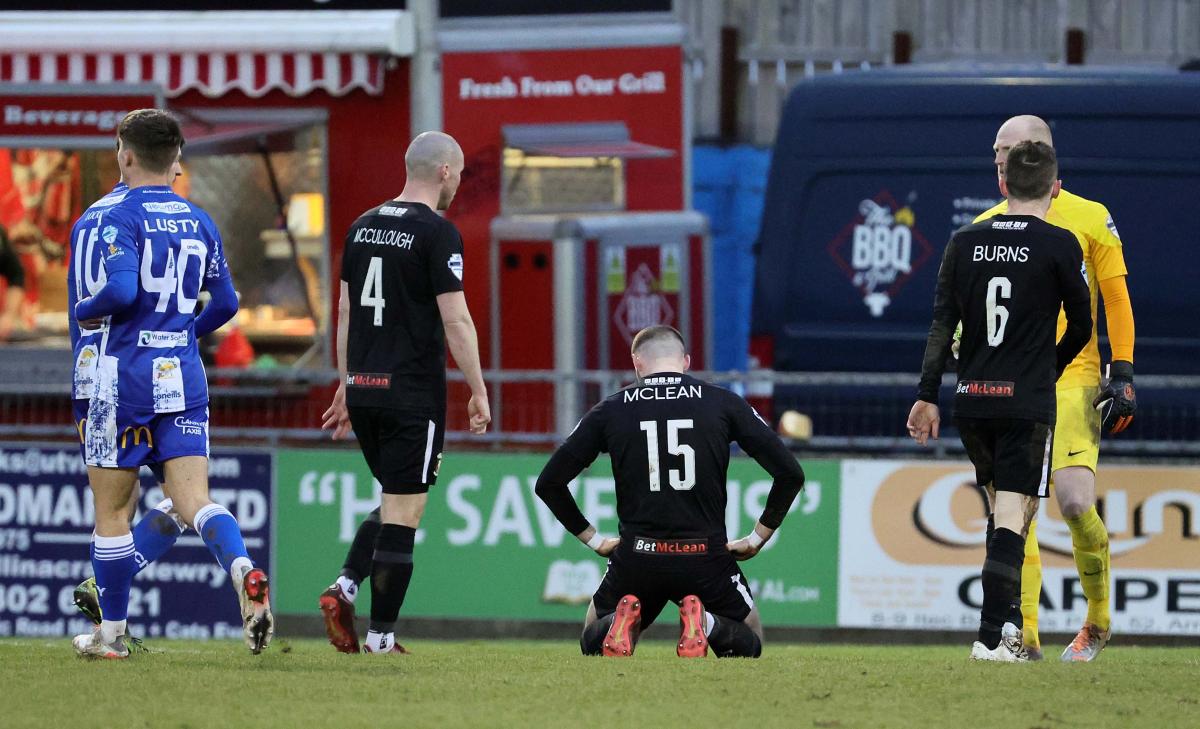 On 58 minutes Glentoran made it 3-1. They worked the ball well on the right before Niall McGinn cut the ball back to substitute, Joe Crowe. Crowe found Bobby Burns who in turn picked out an unmarked Jay Donnelly who slammed the ball past Maguire from around 10 yards. Despite being down to 10-men, Glentoran continued to look for a 4th goal. On 61 minutes Jay Donnelly was unlucky not to get his hattrick when he latched on to a great pass from McGinn; Donnelly's shot being blocked by a City defender. Aaron Wightman then won another corner from which Marcus Kane headed wide. Bobby Burns then created another chance for Jay Donnelly but his drive from just inside the area was straight at the keeper. 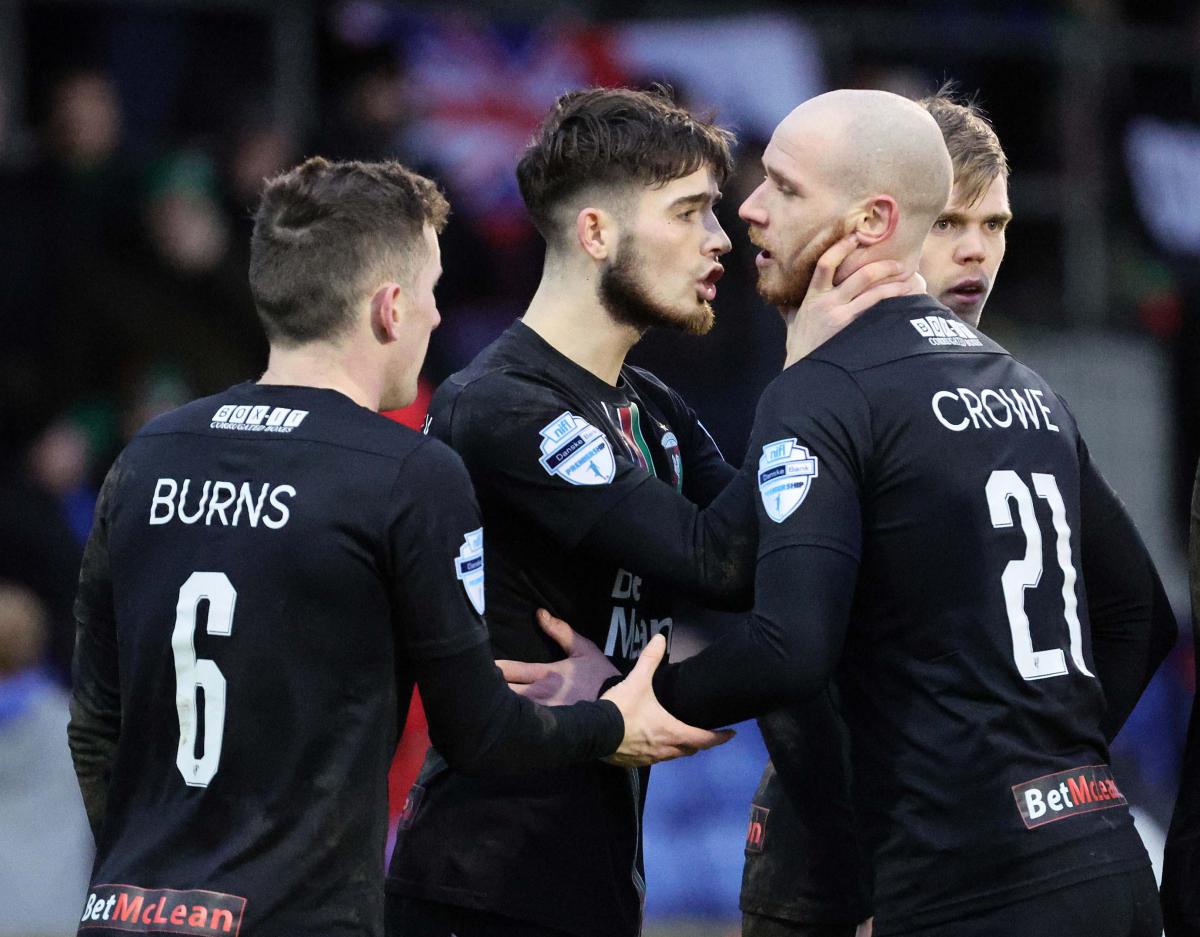 Aaron McCarey was called into action on 73 minutes, keeping out a decent effort from John McGovern. Back down the other end we went and McGinn and Donnelly combined yet again with the Glentoran striker's powerful strike hitting Steven Magiure full in the face before going behind for a corner. With legs tiring on the very heavy pitch, Rodney McAree made his substitutions as the Glens strived to maintain their 3-1 lead. There was one late scare when, following a Newry City corner, the ball was cleared to the edge of the box. Substitute, Donal Rocks couldn't have caught it any better but Aaron McCarey got his fingertips to the ball to put it over the crossbar. 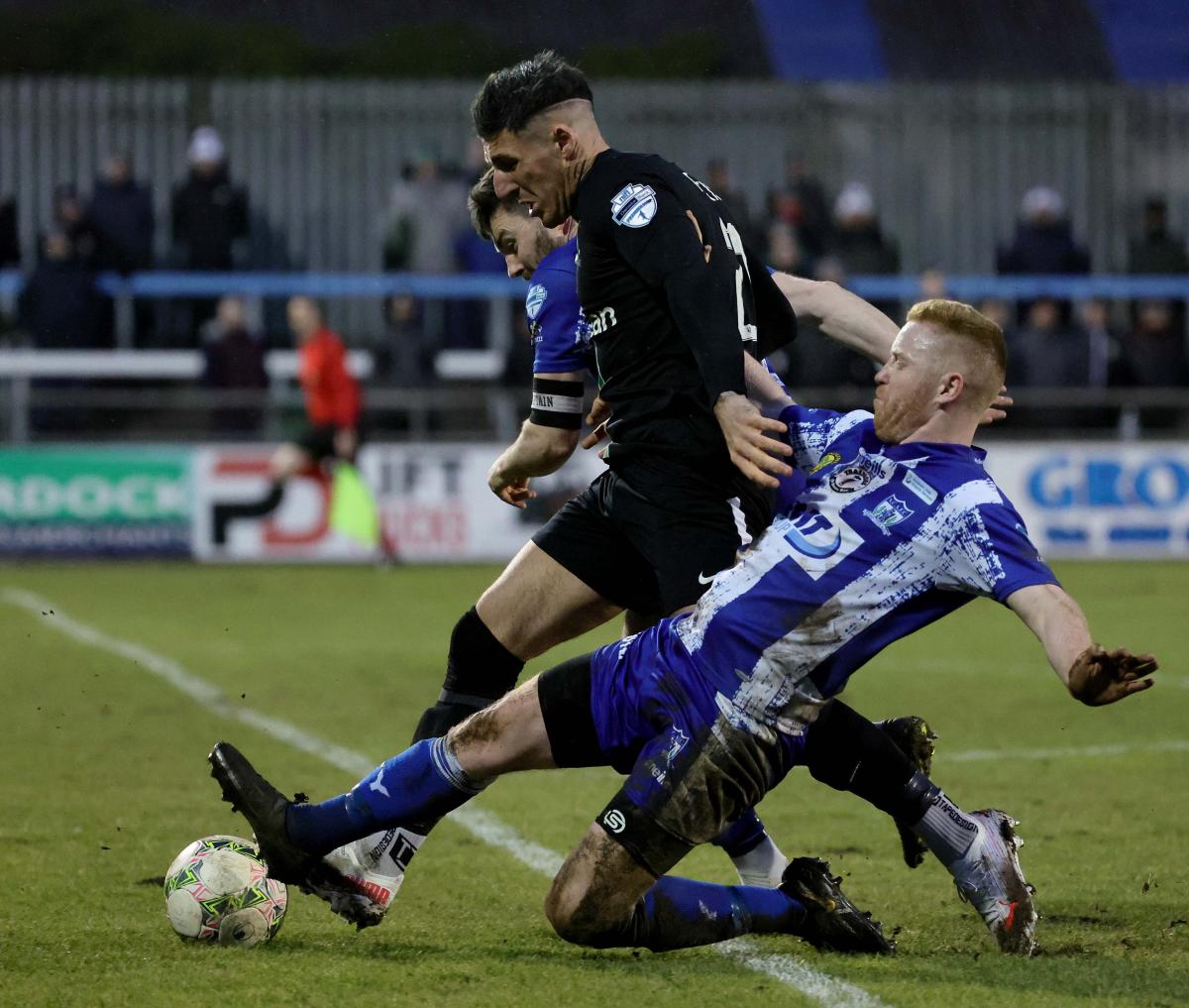 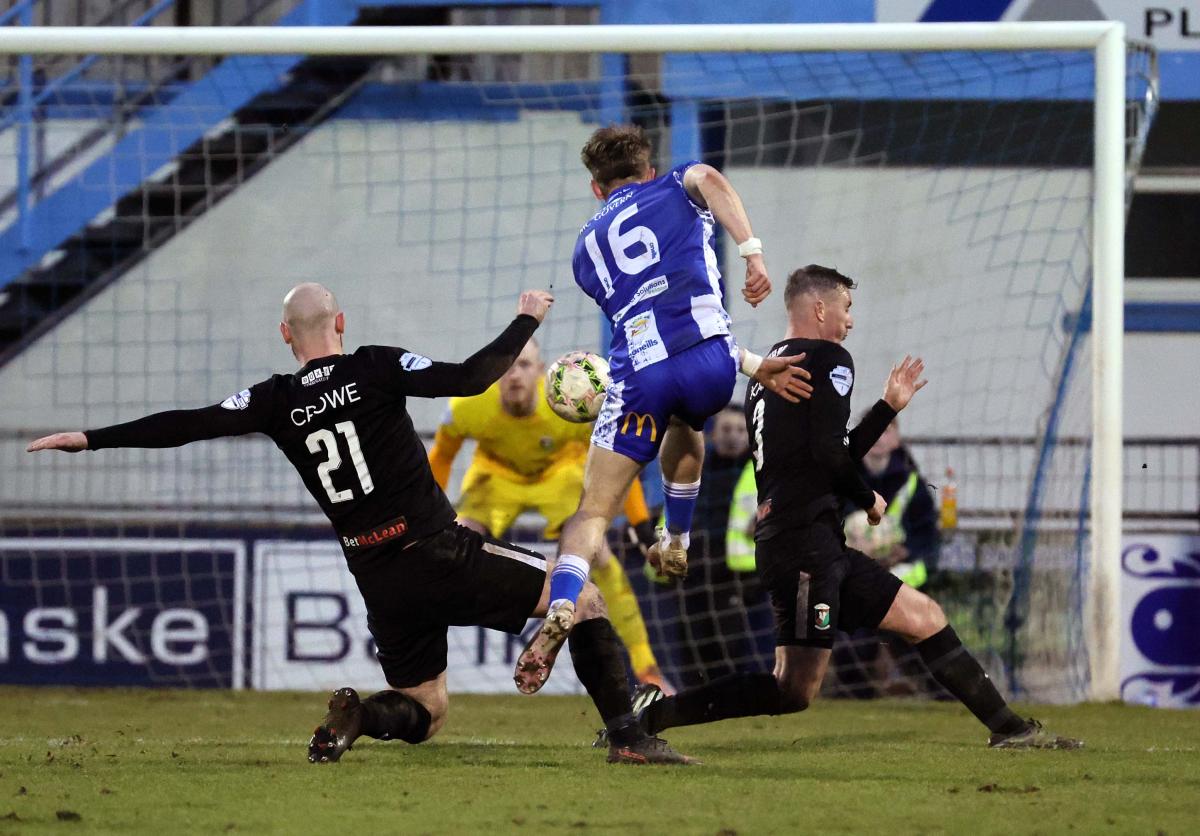