Goals from Sean Ward, Richard Clarke and Andrew Waterworth gave Glentoran a comfortable 3-0 win at Ballyskeagh this afternoon. It was an unspectacular performance from the Glens in freezing conditions; one of those games when the team didn’t play to their full potential but, most importantly, dug deep and still picked up 3 valuable points.

A slack defensive header from ex-Glentoran defender, Philip Simpson, presented Richard Clarke with a chance after just 2 minutes but his tame effort was easily collected by Lee Windrum in the Lisburn Distillery goal. The Whites missed a great opportunity to go in front on 5 minutes when Jordan Hughes went through on goal, however with only Elliott Morris to beat Hughes blazed his shot well over the crossbar. An excellent passage of play involving Waterworth, Clarke and McAlorum almost brought the opening goal; a defensive block preventing McAlorum’s header hitting the target (10). Glentoran were beginning to dominate and a Martin Murray shot from just inside the area was narrowly off target (13) whilst Jimmy Callacher was unlucky to see his header, from Stephen Carson’s corner, cleared off the goal line (14). Midway through the first half Carson fired over from just outside the penalty area and moments later after cutting in from the left he had 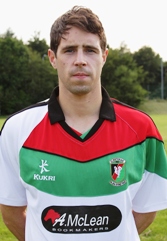 another effort blocked by Andy Hunter. The Glens finally went in front on 29 minutes. Sean Ward picked the ball up on the right flank and cut inside before firing a left foot effort goalwards. The shot took a wicked deflection off Philip Simpson leaving Whites’ keeper Windrum flat-footed as the ball went past him. A fortunate goal but one the Glens dominance deserved. 6 minutes from the break a snap shot from Aaron Boyd was turned around the post for a corner by Elliott Morris. From the set piece the ball fell to Boyd again but his weak effort was easily gathered by Morris.

5 minutes into the second half a foul by Simpson on Waterworth saw referee David Malcolm award the Glens a free-kick 25 yards from goal. Jimmy Callacher stepped up but his drive was well off target. Lisburn Distillery had a great chance to level things up on 58 minutes. A free kick was played into the Glentoran area and Michael Moore nodded the ball down for substitute Michael Halliday. The former Glens striker struck the ball perfectly but was denied by a superb stop from skipper, Elliott Morris. That miss proved costly as less than a minute later Glentoran doubled their lead. A cross 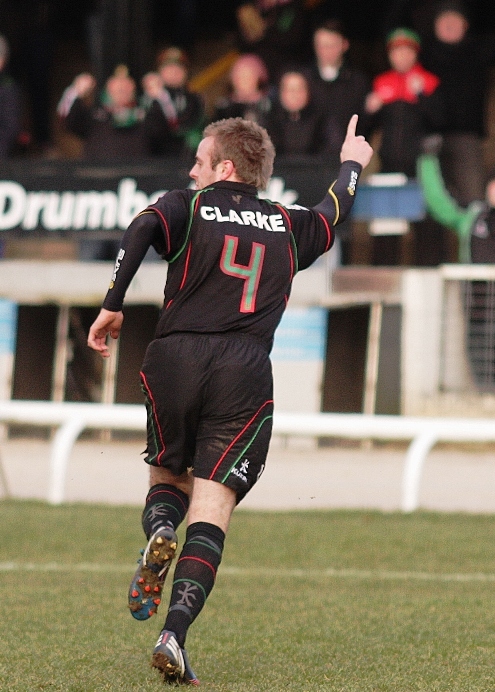 from the left from Stephen McAlorum hit Waterworth in the area and fell at the feet of Richard Clarke who made no mistake, scoring his 7th goal of the season from 10 yards. A great challenge from Carson created an opportunity for Jason Hill (73) but Lee Windrum dealt with Hill’s 20 yard shot comfortably. Andrew Waterworth, playing his 200th game for Glentoran, got on the scoresheet with 15 minutes remaining. He was in the right place to get on the end of an excellent cross from Carson and headed home from just inside the 6-yard box. That made it 16 for the season so far for Waterworth and 57 in his Glentoran career to date. He might have had another 3 minutes later but mishit his shot when set up by Jim O’Hanlon.

So Glentoran move up into 5th place and have the opportunity to move up another place if they can beat Glenavon at the Oval on Tuesday evening (kick off 7:45pm). 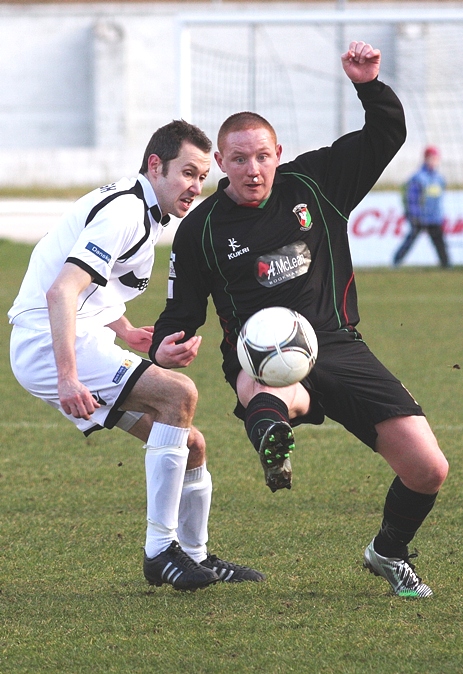