Glentoran produced one of their best performances of the season to fight back and earn a credible point against South Belfast rivals Linfield in the annual Boxing Day fixture. Glentoran having not won the Big Two festive derby at The National Stadium since 1972 went into the game low on confidence following back to back league defeats to Ballymena and Ballinamallard Utd. The Boxing Day result though means that Glentoran have now had a win and two away draws though against Cliftonville, Crusaders and Linfield in their last three games against Belfast rival clubs showing the strides being made under new manager Gary Haveron. 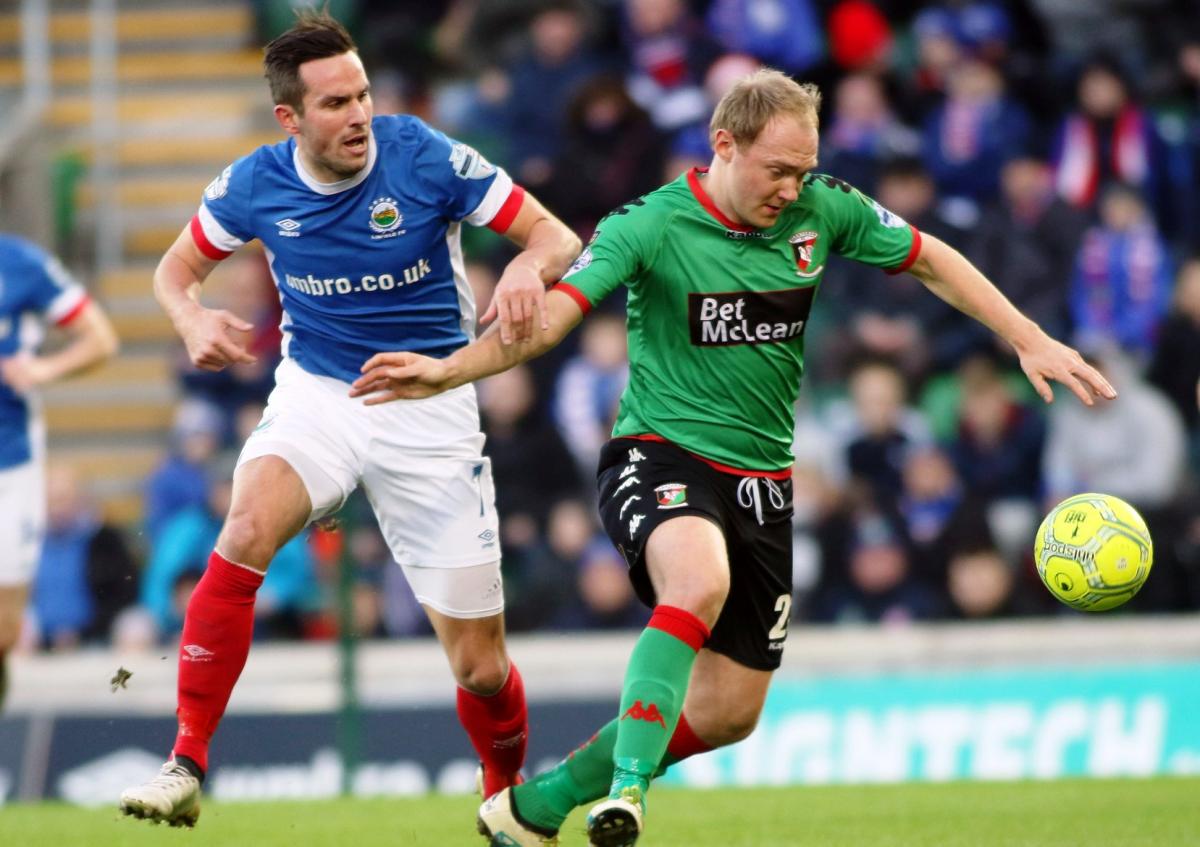 Glentoran lined up as expected with a flat five across midfield with Jonathan Smith playing on the right hand side of midfield rather than his more natural place behind lone striker Curtis Allen. Glentoran started brightly with early pressure down the left hand side from Chris Lavery forcing Linfield into hurried clearances and general discomfort in the Linfield back four. The crowd responded, lifting their noise as belief from pre-match expectations increased. Aaron Harmon then got free down the left hand side into the box and although his low cross was dangerous across the six yard box, there was no Glentoran shirt to meet the delivery.

Linfield started to get their foot hold in the game with set pieces starting to cause problems in the Glentoran backline. On the 5th minute the first delivery went into the box from Kirk Millar and a combination of former Glentoran defender Jimmy Callacher and a Glentoran defender flicked the ball onto the top of the crossbar. Just a minute later Niall Quinn headed just wide from another corner and on the 8th minute a goalmouth scramble ensued from another Linfield corner which Glentoran cleared desperately away. On the 11th minute the pressure continued to grow with Linfield's first meaningful outfield attack when Calum Birney was caught out on the right hand side letting Linfield into the box. Morris deflected the cross upwards to the back post where Aaron Burns tried to stab home only his effort was blocked on the line by Ross Redman.

It appeared Glentoran had survived but very disappointingly for Gary Haveron from the resulting set piece Linfield did take the lead. Having had four previous set piece warnings in just seven minutes Glentoran were riding their luck, but a good delivery again was met by Mark Haughey just outside the six yard box and despite Elliott Morris best efforts, he could only push the ball into the corner of the net. 1-0 Linfield. 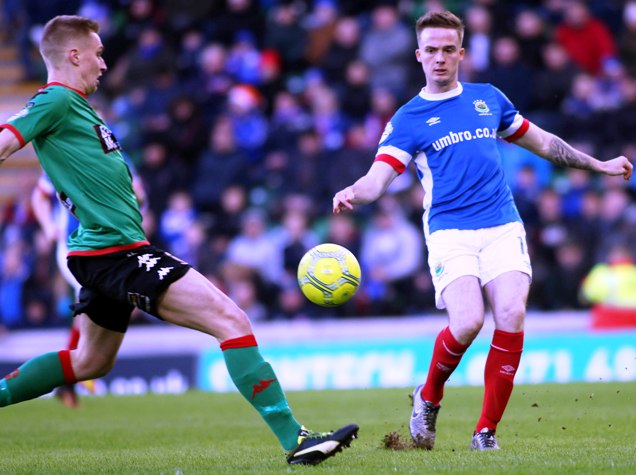 On 19th minute things could have got worse for Glentoran with Aaron Burns dancing his way through the Glens defence but his goalbound effort was deflected wide. No doubt at this point a second goal would have ended Glentoran's challenge but it was at this point that the tide in the game changed completely. Glentoran tightened up, in particular from set pieces and started to pose a threat going forward. Chris Lavery got Glentoran's first shot on target with a 22nd minute strike from the edge of the box but it wasn't going to trouble Carroll.

On 37th minute Linfield could have wrapped up the game again with Aaron Burns connecting with a volley which was smartly stopped by Elliott Morris. Half time 1-0 Linfield.

Gary Haveron made a bold tactical switch at half time moving Aaron Harmon to the right hand side with Jonathan Smith behind Curtis Allen in a 4-4-1-1 shape. The change obviously worked as Glentoran started to cause much more problems on the Linfield goal. Some good play on the left hand side gave Chris Lavery an opportunity to shoot but his effort was poor going wide at Carroll's near post.

Glentoran's decisive moment came on the 60th minute which started with good play from Curtis Allen switching an excellent ball out to the left to Ross Redman. Redman looked to be in trouble but he skipped past his man and crossed into the Linfield box where they could not clear properly. The ball travelled to Aaron Harmon who headed from deep superbly looping Roy Carroll. 1-1 and suddenly there was real belief for the away side. Nacho Novo came into the game up front alongside Allen for Smith to further heighten Glentoran's rejuvination.

Linfield had a few half chances as they tried to change the tide but in truth Morris was rarely troubled. Glentoran lost Eric Foley with 15 minutes remaining in the game with a hamstring injury which involved a Linfield player tripping over the ball and bizarrely being awarded a free kick. Referree Ian McNabb would be the focus of the final 10 minutes of the game as well with two contraversial decisions both going against Haveron's side leaving Glentoran in frustration. On the 82nd minute Glentoran pushed forward and Curtis Allen fed Ciaran Caldwell who ran through on Carroll's goal. Caldwell got to the ball first rounding the Linfield keeper before going down under Carroll's challenge. Whether Carroll got the ball or not will be one for the replays but it was a huge call for McNabb to make. 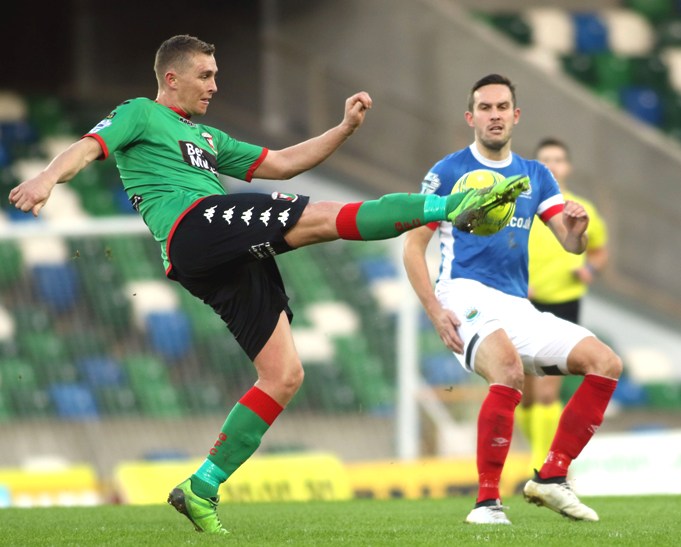 Just two minutes later McNabb was left with another decision to make after McAlorum caught Sean Ward late and hard. Again replays will be needed but the tackle didn't look particularly high and in an aggressive Irish League there are many worse challenges which go unpunished. McNabb however had the red card out of his pocked before Ward had even hit the ground and perhaps more composure from the referee would have seen McAlorum survive. 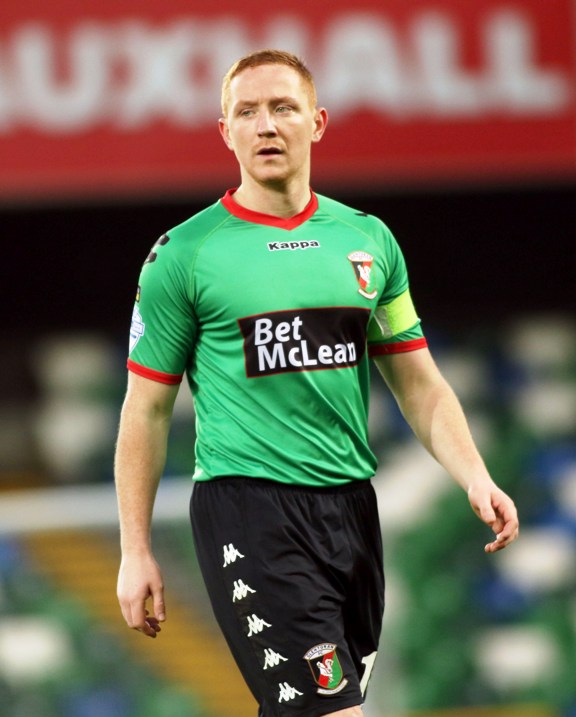 Glentoran were disappointed but not disheartened and despite only having 10 men they were still the team with the best late challenge. Ciaran Caldwell fed Nacho Novo who was the headlines but unfortunately saw Roy Carroll block his goalbound effort and Linfield were able to clear. So close to an incredible finish for the superb Glens in the second half. It was only one point but a big lift for the team heading into an even more important game with Linfield next Saturday in the Irish Cup. Next up, Dungannon on New Year's Eve.