For what seems like the umpteenth time this season, Glentoran today managed to needlessly throw away a good winning position today, in our first league match at the Brandywell in nearly 47 years. Three times hard work by Robbie McDaid got is into the lead but on at least two of those occasions, the sloppy defending that has become our trademark cost us the lead.

The Glens had three changes from last week’s draw with Crusaders. Nathan Kerr, now recovered from flu, came in for Willie Garrett at right back, Calum Birney replaced James Ferrin at centre half and Peter McMahon replaced the suspended John McGuigan on the left of midfield. Curtis Allen – unavailable last week – started on the bench as did – to the surprise of many supporters- Cricky Gallagher.  We lined up in a 4-3-3 formation with Robbie McDaid flanked by McMahon and Dylan Davidson.

The first fifteen minutes were even but relatively uneventful with the main incidents a robust challenge on Robbie McDaid by Dean Curry that surprisingly didn’t merit a yellow card, a Michael McCrudden shot deflected for a corner after John Herron lost possession, a Mark Scoltock header caught cleanly by Elliott Morris, and a wasted shooting opportunity by Ross Redman after he was found in a great shooting position by Peter McMahon.

The Glens broke the deadlock in fifteen minutes. A lob from Stevie Gordon found Robbie McDaid in the Institute box.  By sheer strength McDaid held off two Institute defenders to find John Herron on a typical surge into the box who took a touch then deftly side footed into the net despite the keeper being in close proximity. 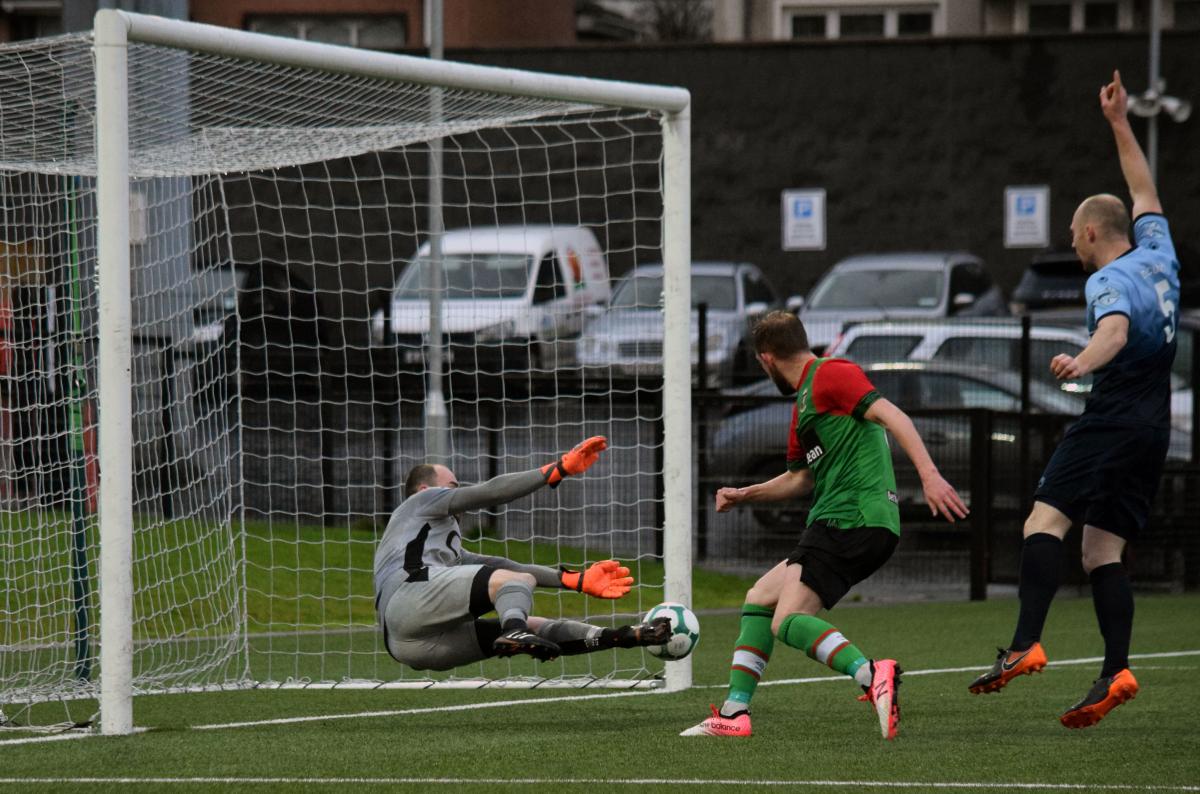 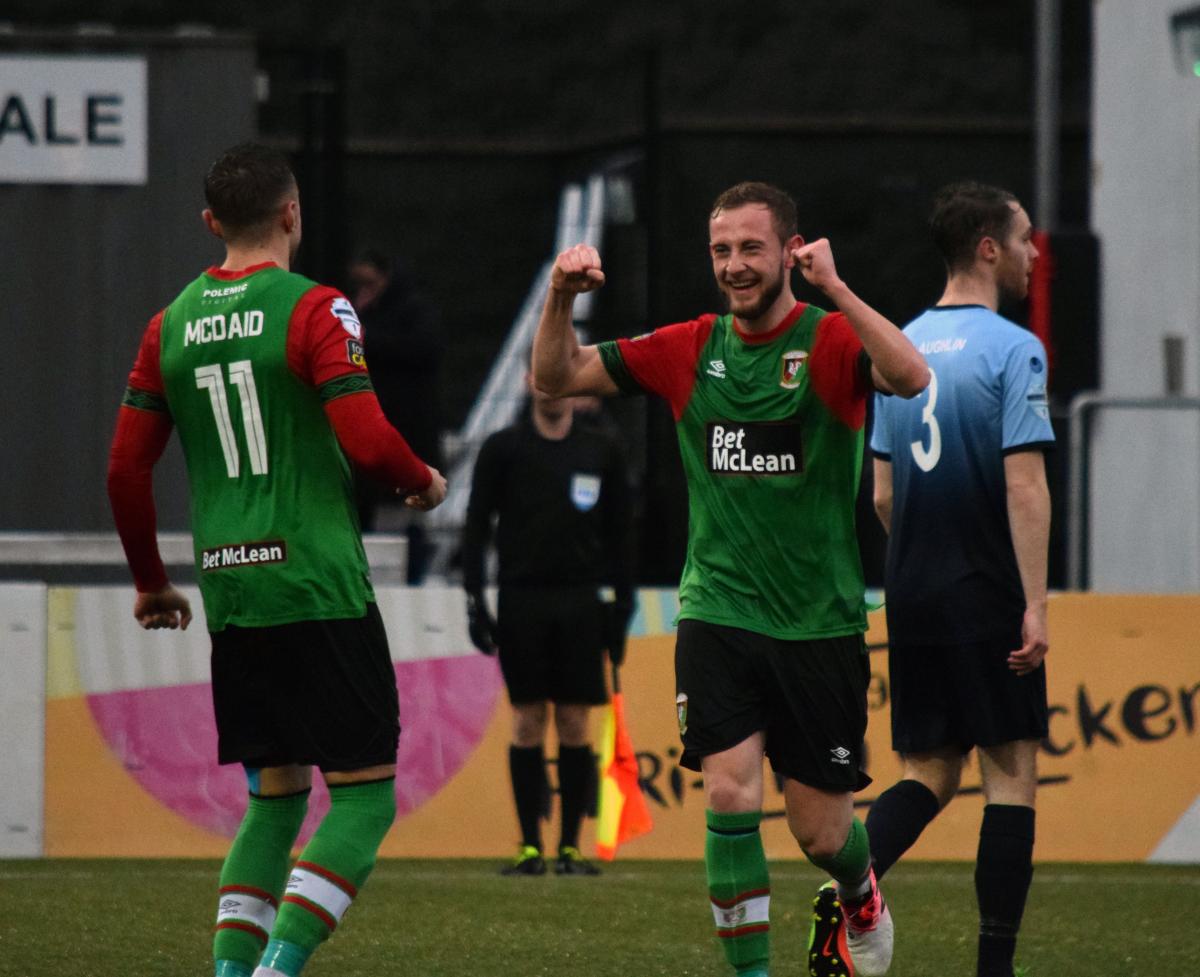 As is so often the case the lead was short lived, in this case just five minutes.  A neat passing move got Institute into a decent position at the edge of our box.  The always dangerous McCrudden danced unchallenged past four Glens defenders and found a completely unmarked Ronan Wilson on the right wing whose unchallenged  cross was inexplicably turned into his own net by Dylan Davidson. Not the first such goal we’ve seen down that side this season.

Five minutes later Joe Crowe was lucky to escape a yellow card for a heavy challenge on McCrudden. The next incident of note was in 41 minutes when a great through ball found birthday boy Marcus Kane in the box, Moko was very unlucky to see his shot go just wide after a determined, resilient run,

On 43 minutes a great, deep free kick from Nathan Kerr was headed back into the box by Calum Birney where Robbie McDaid rose above the keeper to nod home.  A typical McDaid finish to send us in 2-1 up at the break. 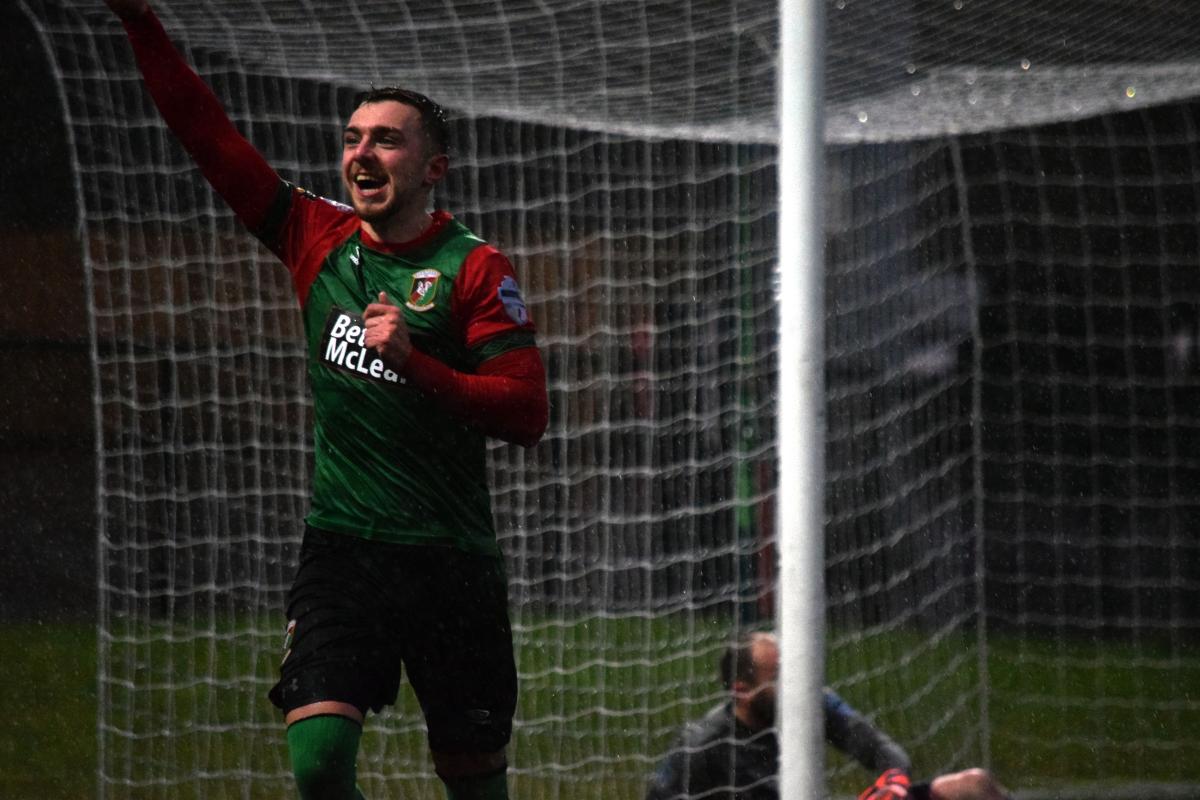 Glentoran surprisingly started the second half with neither of the two out of sorts wingers replaced and on 50 minutes a needless foul around 5 yards out led to an Institute free kick. It was brilliantly struck into the top corner by Aaron Harkin. Elliott Morris couldn’t have done anything about it as the scores were equalled at 2-2.

On 56 minutes Calum Birney was booked for a foul on the edge of the Glens box. This time Harkin’s free kick was blasted over. 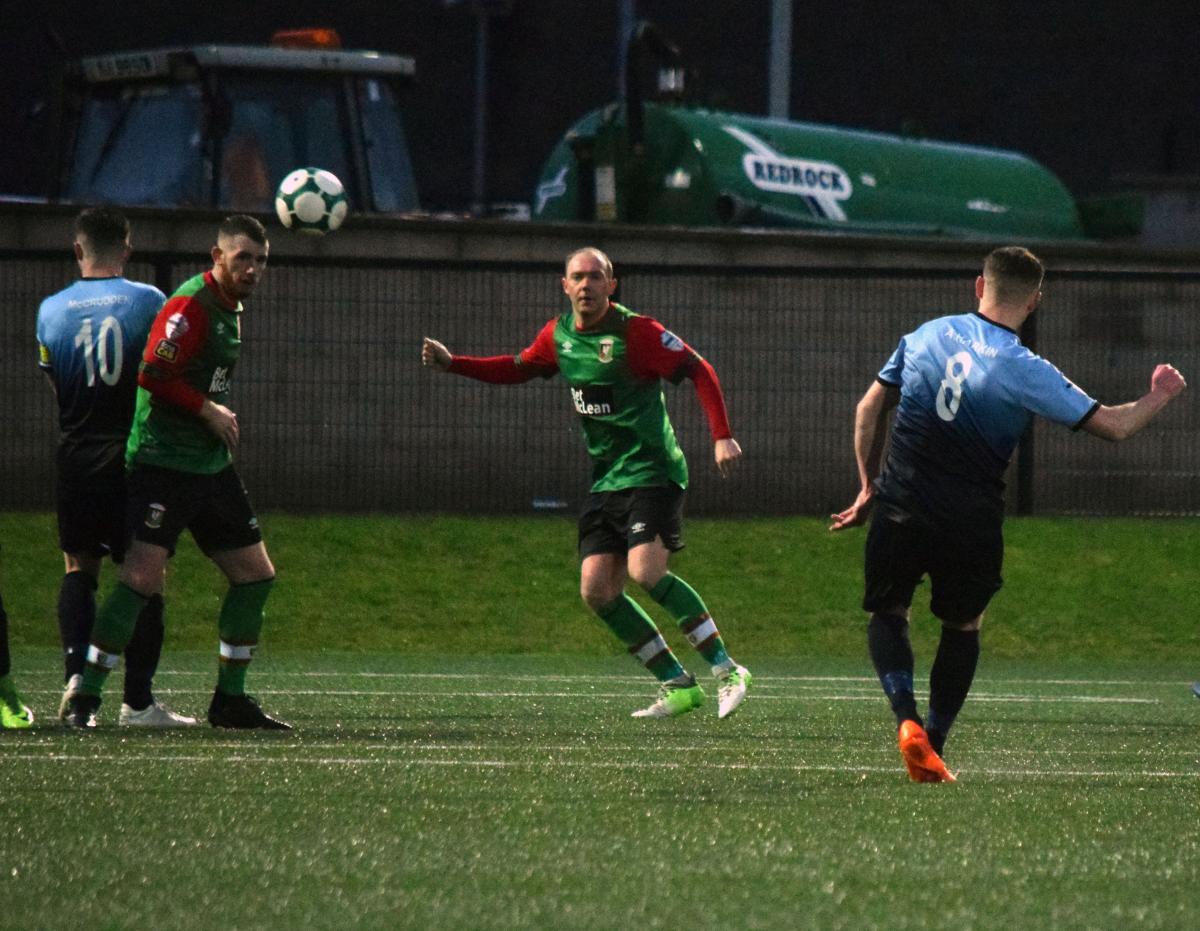 Eight minutes later Glentoran went ahead for the third time when Robbie McDaid – the outstanding candidate for man of the match – went on a solo run to cut in from the right wing.  Holding off a defender he hit an unstoppable right foot shot past the ‘stute keeper for his tenth goal in fifteen starts this season. Surely we’d manage to hold on this time. 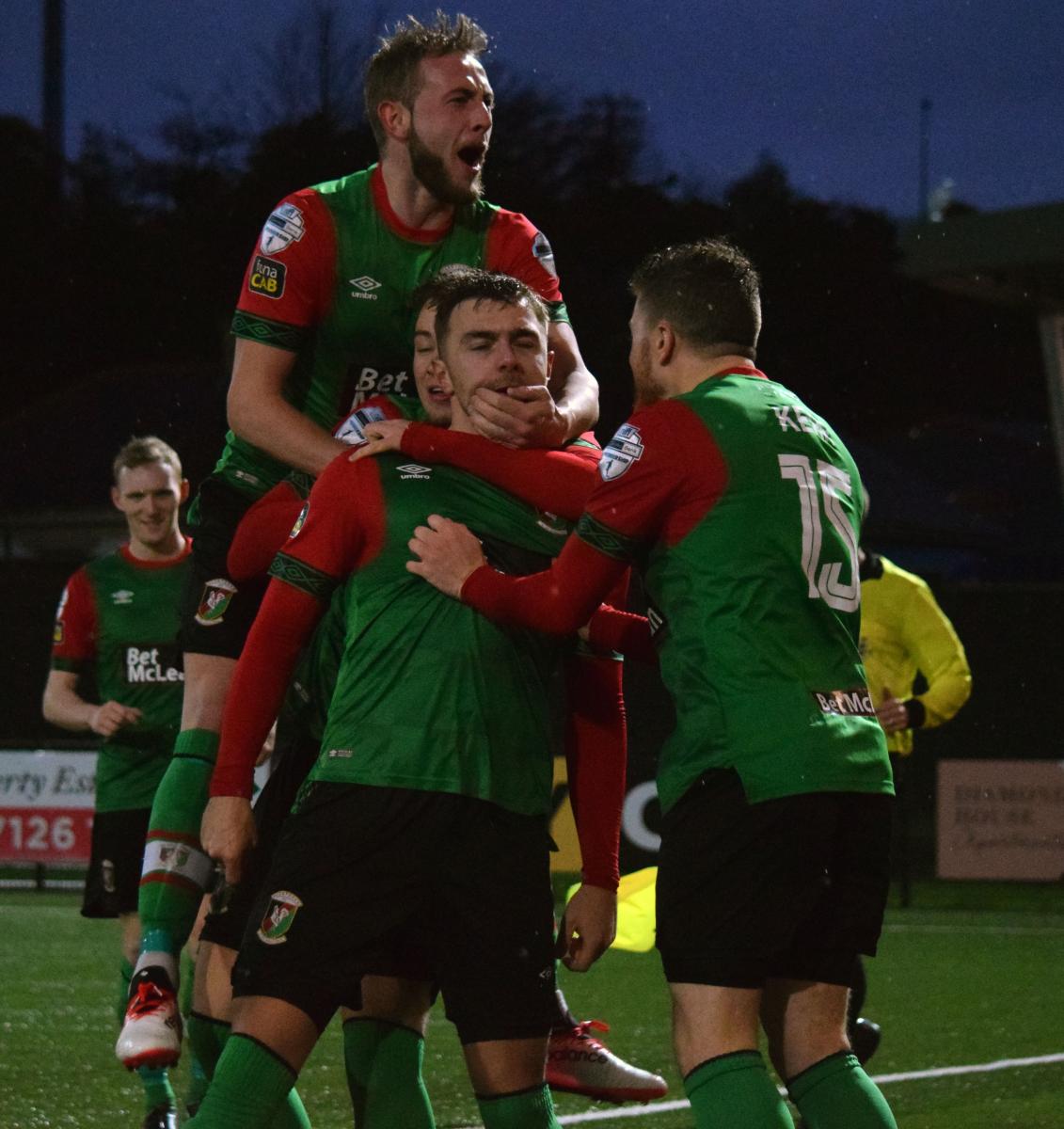 Still without any substitutions made, we continued to attack and on 71 minutes former Cliftonville player Caoimhin Bonnar was finally booked for one foul too many on McDaid. The resultant free kick was headed over by Stevie Gordon. Institute then made the first substitution of the match as they moved to three at the back with former Glens striker Darren Henderson replacing Mark Scoltock. However it was the Glens who next created a chance when Peter McMahon had a weak attempt from a good shooting position.

Next effort came on 82 when a great run by Ronan Doherty came to nothing after he effortlessly best four Glentoran players. At that point we finally saw a Glens substitution when Curtis Allen replaced the ineffective McMahon. At the same time Institute replaced Aaron Jarvis with Jamie McIntyre.  A minute later u20s star goalscorer Paul O’Neill came on for Davidson.

Although Institute hadn’t looked like scoring, there was a feeling of inevitability about it when they equalised on 88 minutes. I probably don’t need to describe the goal as we’ve seen it so often but in the interests of completeness here goes. Joe Crowe made a clean and effective block tackle on McCrudden but the ball broke to Joe McCready on the edge of the box. At that point six nearby Glentoran players failed to attempt a challenge, giving McCready time to set up an accurate, well hit shot past what looked like eight Glens players into the right hand corner, giving Elliott Morris no chance. 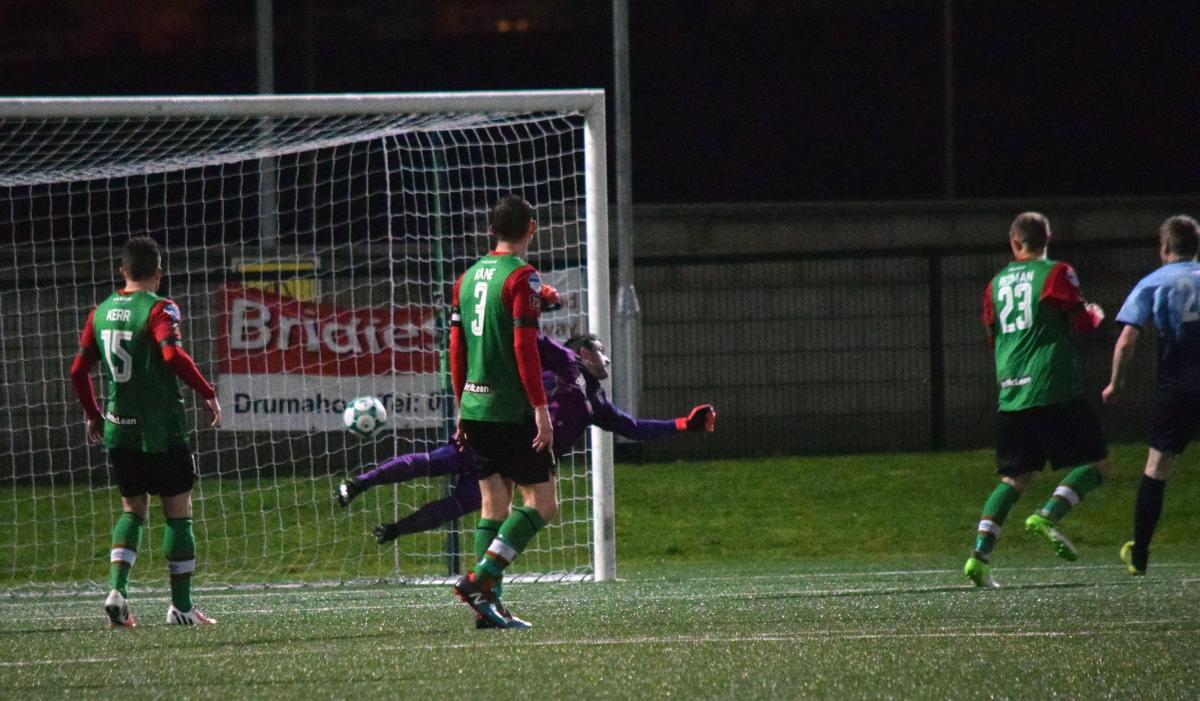 There was still time in the remaining 60 seconds for two of our players to get bookings that will result in suspensions. Joe Crowe first for a foul after Ross Redman had lost possession, then Redman himself for getting involved in an altercation with Harkin (also booked) who wouldn’t give the ball back for a free kick. 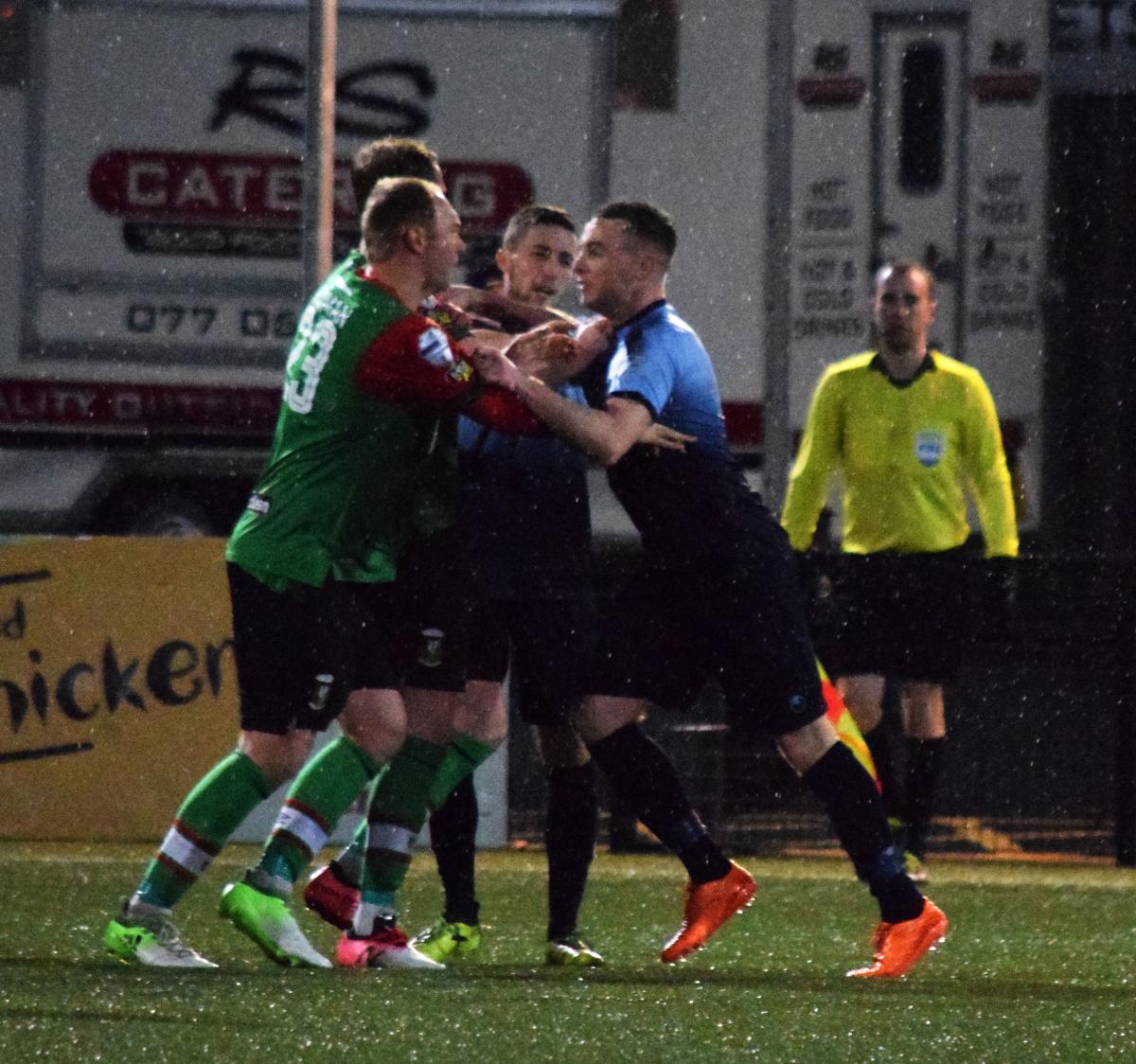 With the final incident of the match we had a claim for a penalty rejected when a defender looked to have punched the ball of their goal line but the thoughts of the Glentoran support will once again be on the ninth time this season we’ve failed to win after being ahead in the second half.  They will definitely be hoping for some meaningful activity in next month’s transfer window.