Crusaders went home with all three points after this nine goal thriller at the Oval this afternoon.  Eddie Patterson made three changes to his defence and perhaps this showed as the visitors raced into a three goal lead after just fifteen minutes.  The first chance and first goal of the game came after eight minutes when Crusaders veteran David Rainey crossed from the left and found Chris Morrow unmarked at the far post who headed past Elliott Morris.  Five minutes later Jimmy Callacher gave the ball away to Timmy Adamson and the Crusaders number nine ran clear to poke the ball under the advancing ‘keeper.  Adamson added his second soon afterwards in somewhat bizarre circumstances.  As the Glentoran defence attempted to clear, the ball dropped to Adamson who was in an offside position and sure enough the assistant’s flag was raised.  However referee Davy Malcolm quite rightly ruled that the ball had been played by a Glentoran defender, Adamson played to the whistle and as the ball dropped he flicked it past Morris from eight yards. 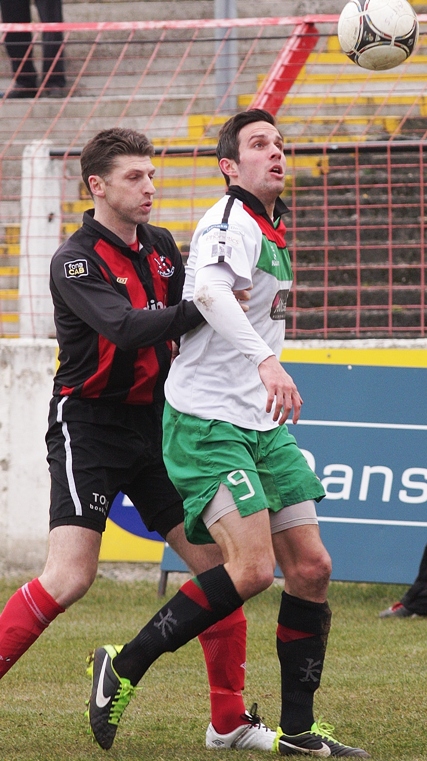 The Glens were all at sea at this stage and with a bit more fortune Crusaders could have added to their tally.  Paul Heatley shot into the side netting after taking advantage of a misplaced Mark Clarke pass, Elliott Morris saved brilliantly from a close range David Rainey header and Chris Morrow’s thumping volley cannoned off Morris’s chest and away to safety.  However on twenty seven minutes the Glens grabbed themselves a lifeline.  Crusaders ‘keeper Yohann Lacroix missed a deep Martin Murray cross, Kevin Bradley’s shot came back off the post and top scorer Andy Waterworth stooped to head the rebound into the back of the net.  Soon afterwards the Glens almost pulled another goal back when Mark Clarke’s stunning thirty yard volley was equally brilliantly turned over the bar by Lacroix. Three minutes later Adamson should have had his hat trick when a Crusaders free kick was headed down by Morrow but the unmarked centre forward pulled a great chance wide of the post.  But in the last minute of the half it was the Glens who grabbed another goal.  Andy Waterworth’s powerful left wing run and cross caused problems in the Crusaders defence, the ball eventually being picked up by Richard Clarke who curled a superb shot from sixteen yards into the top corner giving Lacroix no chance.

Naturally the Glens came out for the second half full of confidence but it was Crusaders who almost extended their lead six minutes in.  A long clearance from defence was chased by Declan Caddell forcing Morris out of his area in an attempt to head clear.  Caddell won the aerial battle and his header bounced towards an empty goal but drifted just wide of the post.  As the Glens pushed for the equaliser Waterworth robbed Colin Coates to create a golden chance for the home side but his pass to Richard Clarke lacked accuracy, while a Stephen McAlorum header from a Jim O’Hanlon cross was well saved by Lacroix.  However the breakthrough came on sixty two minutes after the Glens won a right wing corner.  Richard Clarke’s deep ball to the far post was missed by Lacroix and O’Hanlon was left unmarked to nod a simple header into the back of the net and level the scores.

At this stage there looked like being only one winner with the home side enjoying the bulk of the possession as well as playing some neat and attractive football.  However with eighteen minutes left they were hit with a sucker punch.  Coates’s long clearance from his own half fell kindly for Heatley who ran clear of the defence and superbly lobbed the advancing Morris from the edge of the box to put his side back into the lead.  Not surprisingly this was a savage blow to the Glens and the rejuvenated Crues started to create chances once again, adding to their tally on eighty one minutes.  After a corner was only half cleared the ball fell to substitute David McMaster who evaded an O’Hanlon challenge before cutting in from the right and curling a brilliant effort into the top corner.  This left no realistic way back for the Glens but with the last kick of the game substitute Stephen Carson went on a trademark run down the left and curled a ball to the far post which evaded Lacroix and nestled in the back of the net.

So a thrilling game for the neutral with some superb goals from both sides, but this will be no consolation to Eddie Patterson’s men and it looks as though three points at Windsor Park on Easter Tuesday will be a must if we are to overtake Linfield for third place. 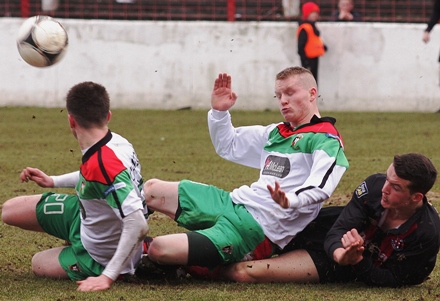