Glentoran closed to within 3 points of second placed Coleraine after a comfortable 4-0 win over Portadown at the Oval this afternoon in the Danske Bank Premiership. 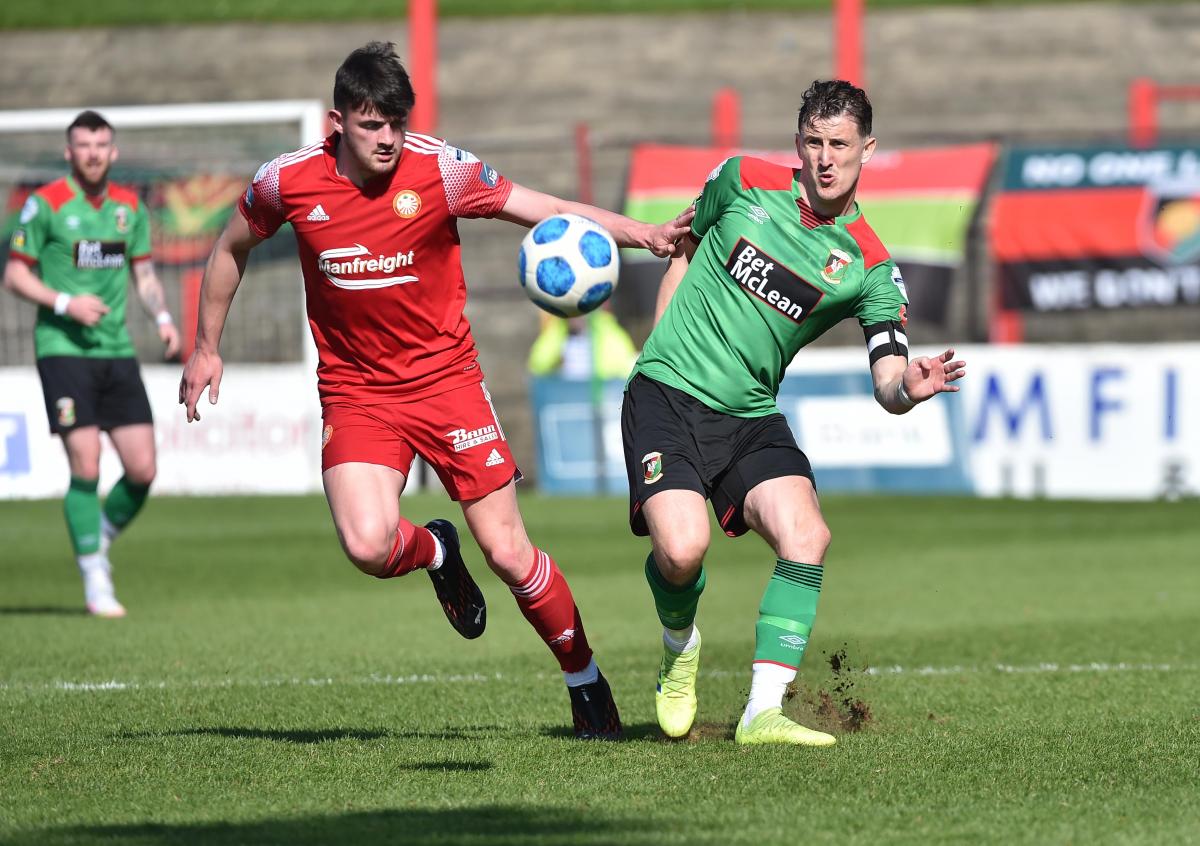 Robbie McDaid was back in the starting XI following his recent injury whilst Ciaran O'Connor also returned to the bench following his enforced absence. Gael Bigirimana, back from international duty, started in midfield however our other player returning from World Cup qualifying action was unable to make the squad due to a thigh injury picked up against the Netherlands. 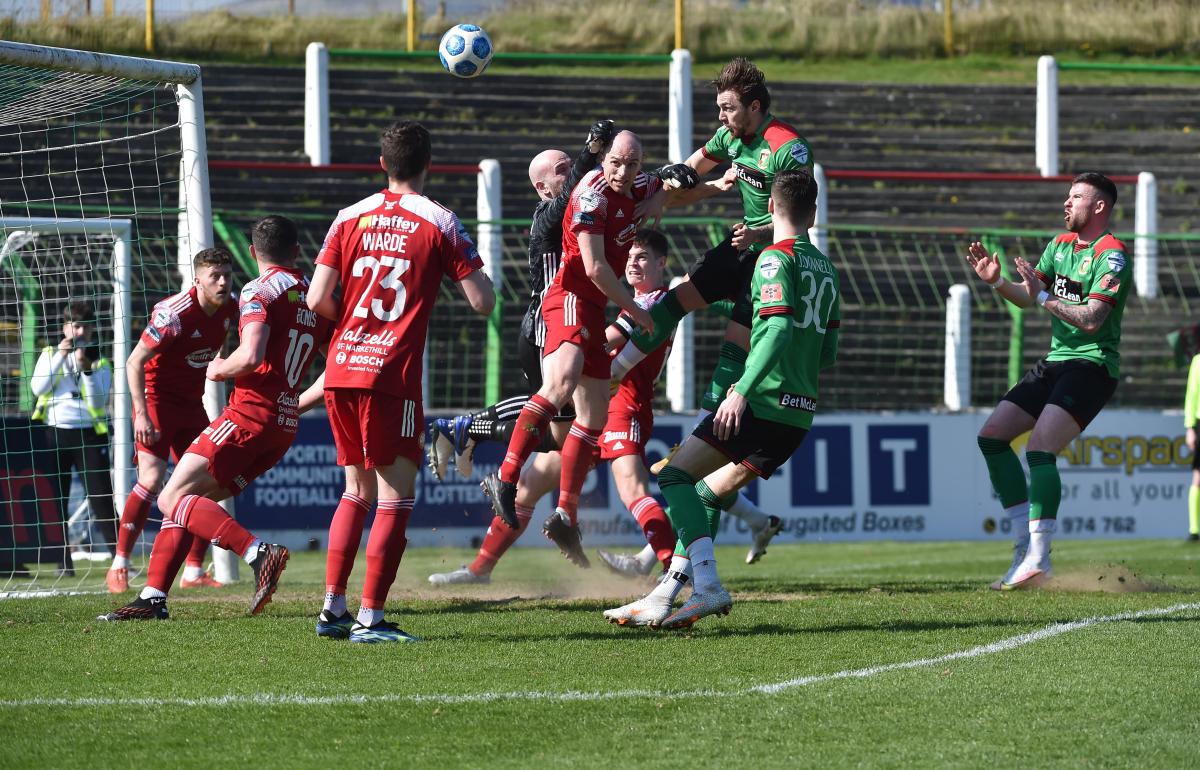 Glentoran dominated possession in the early stages of the game, patiently playing the ball around and waiting for an opportunity to edge in front. Whilst we had scored early goals in the two previous league games against the Ports this season it took 13 minutes today to register a shot on target. It came following good link up play between Robbie McDaid and Hrvoje Plum with Robbie firing at goal from the edge of the box. His shot lacked power though and Gareth Buchanan made a comfortable save. That move seemed to lift the Glens and other opportunities quickly followed. 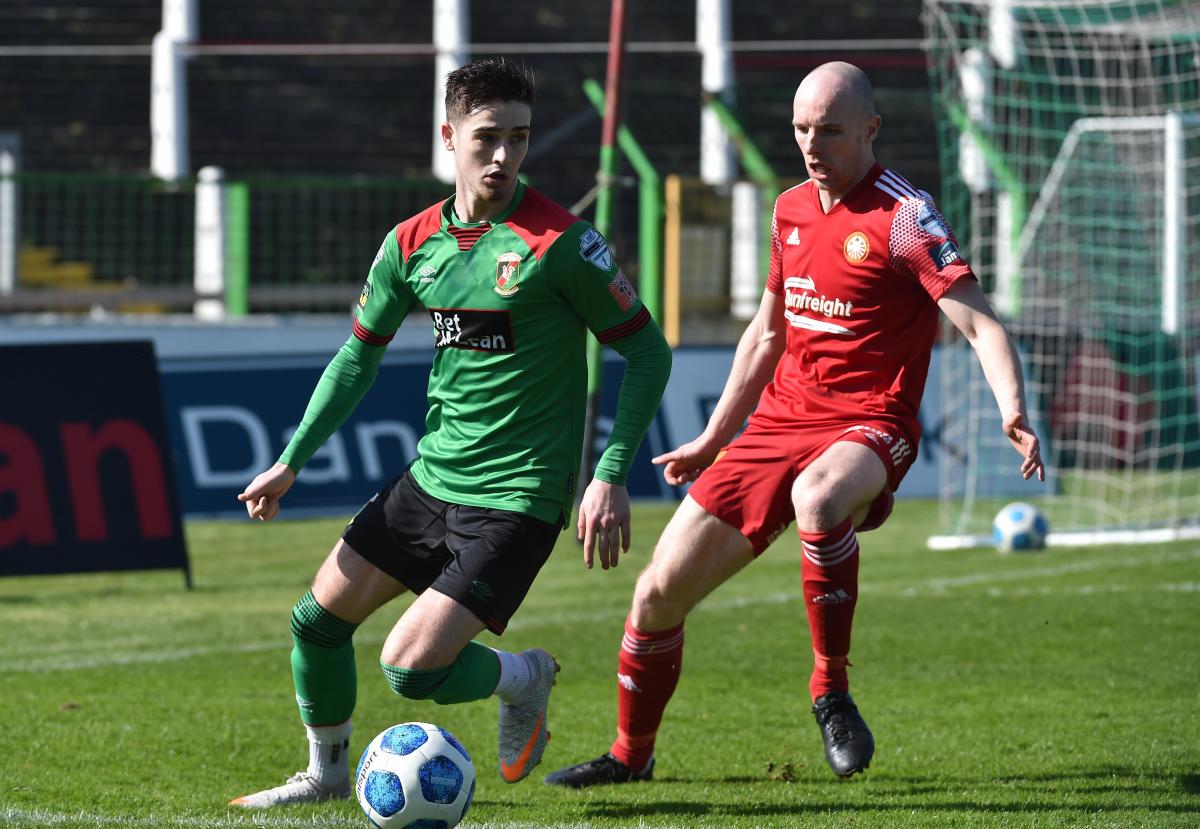 Marcus Kane's flicked header found McDaid on the left and he drove to the edge of the penalty area before firing a cross / shot towards the back post and a waiting Jay Donnelly. Luke Wilson was on hand though to clear the ball from close to the goal line. Rory Donnelly then crossed for Robbie McDaid but unfortunately he couldn't keep his shot on target. Next up was Marcus Kane but his right footed shot from the edge of the box flew high and wide of the target. 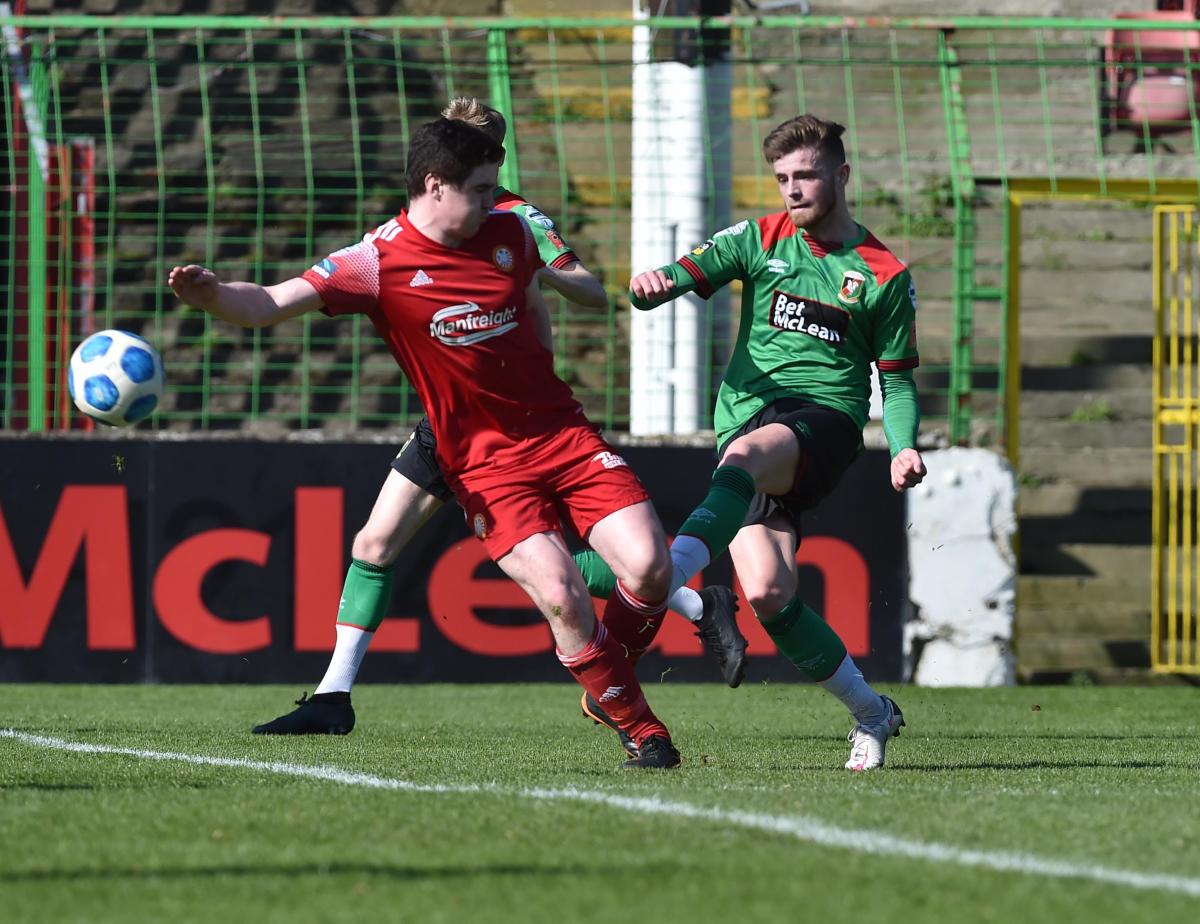 Midway through the first period a long ball forward was well controlled by Jay Donnelly who, from the by-line, hooked the ball into the danger area. Rhys Marshall's first touch gave him a great opportunity to shoot on goal but his effort was well blocked by a Portadown defender. The game then went through a period where both sides struggled to create any meaningful chances. That all changed though 10 minutes from the break when Rory Donnelly broke the deadlock; and what a goal it was! Caolan Marron played the ball forward towards Rory Donnelly. Rory got the better of a challenge from Ben Tilney before cutting inside and curling a dellightful shot into the top corner from 20 yards out. Gareth Buchanan had no chance! 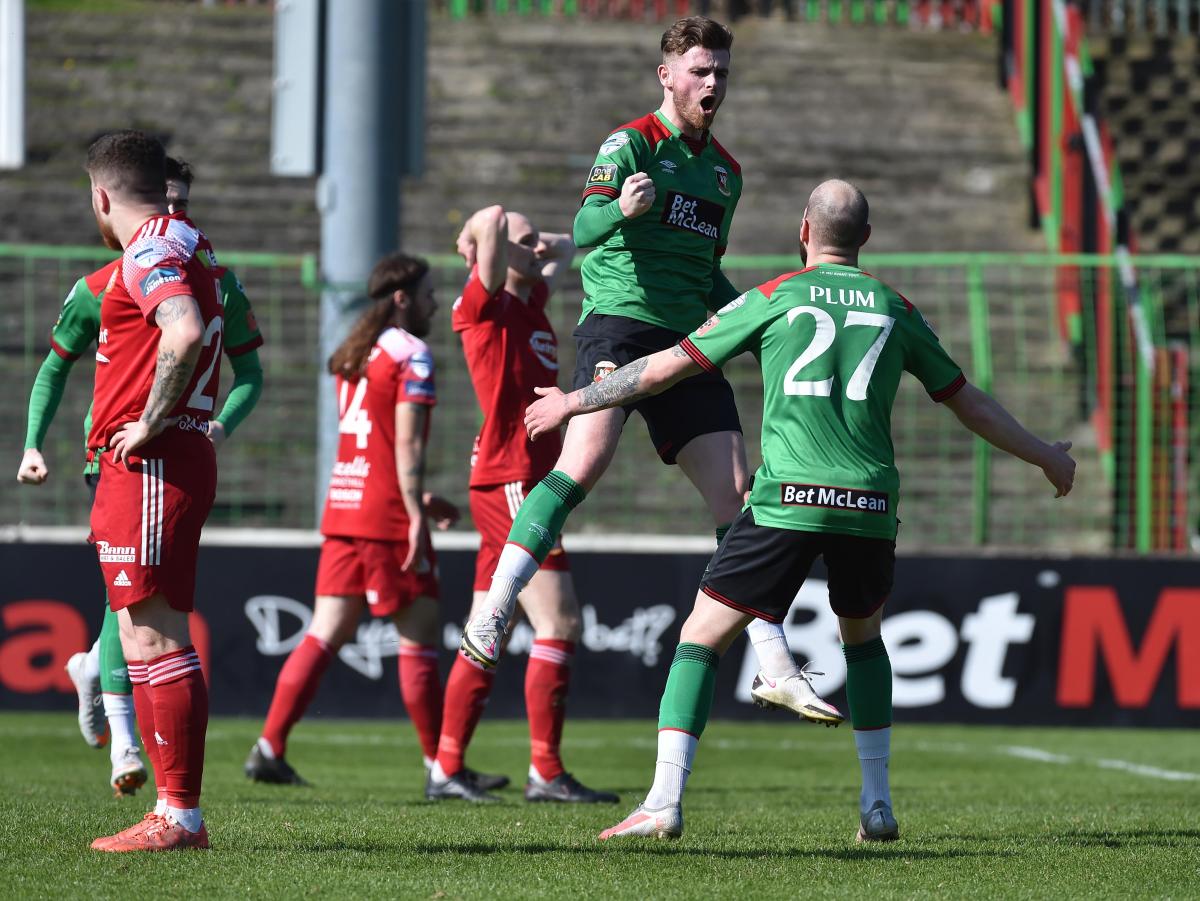 The Glens might have doubled their lead on 39 minutes. Marron went past Tilney on the right before putting an excellent cross into the penalty area. Hrvoje Plum met it well but his header was straight at the keeper. 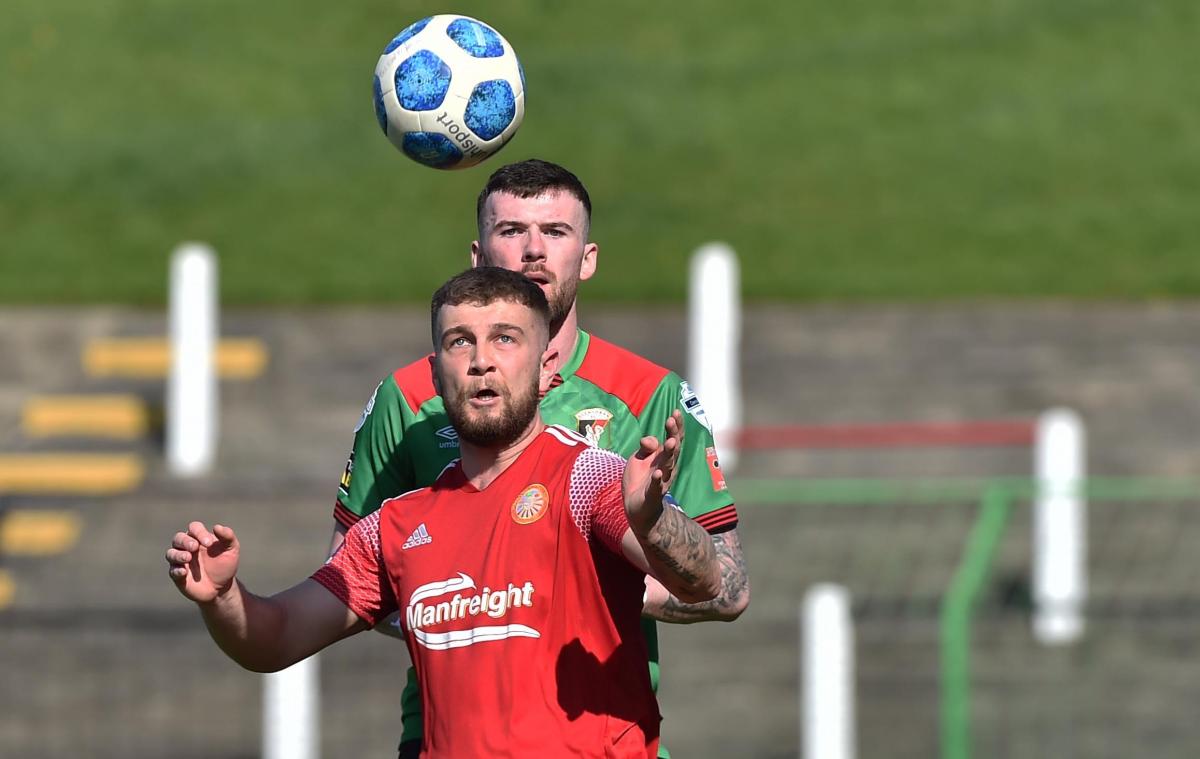 Glentoran, attacking the Sydenham End in the second half, started well and seemed determined to get that all important second goal. Neat footwork by Rory Donnelly on the edge of the area allowed him the chance to lay the ball off to Gael Bigirimana. Unfortunately the Burundi international was wide of the mark. Portadown carried little real threat except from set pieces. On 51 minutes a rare corner saw Lee Bonis have an opportunity but his header was wide of Rory Brown's goal. 10 minutes into the second half Robbie McDaid drove forward with the ball before playing a one-two with Rhys Marshall. Marshall's return pass gave McDaid a chance to get back on the scoresheet after his injury lay off but he dragged his shot across goal and wide of the far post. 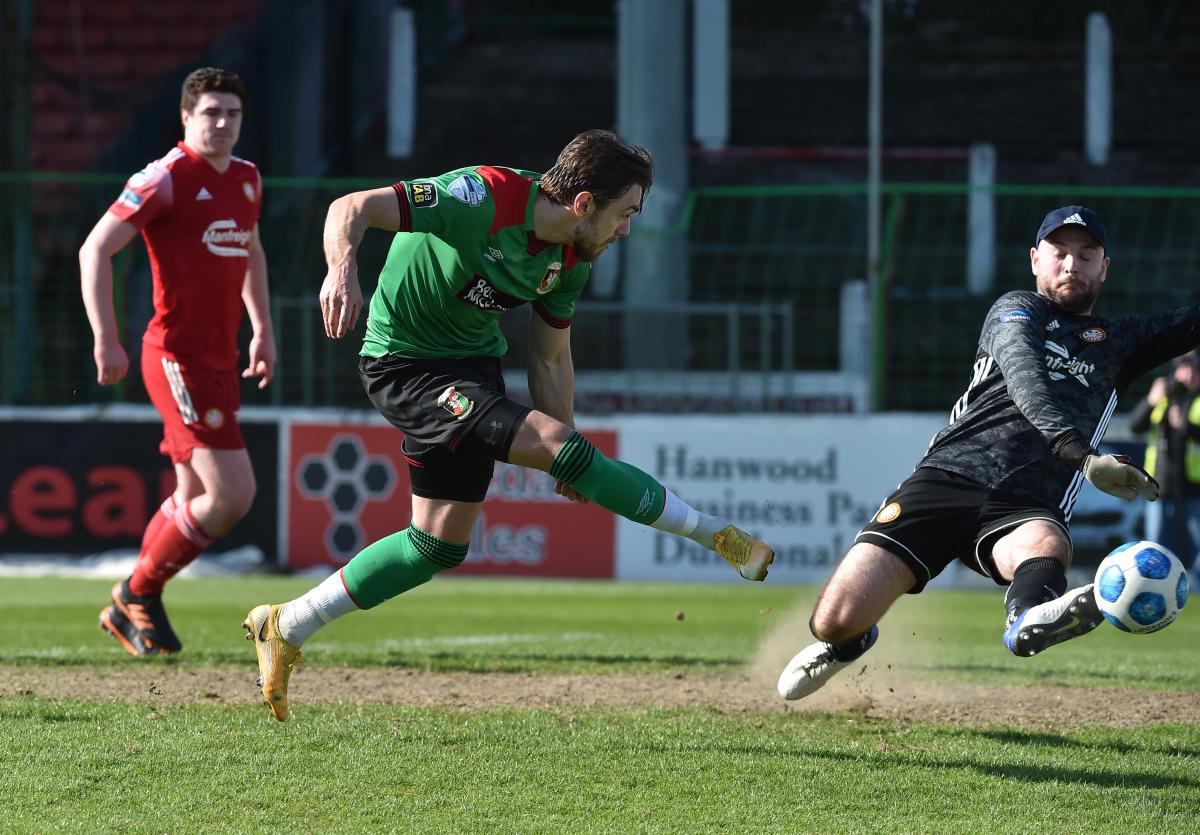 The two linked up again a couple of minutes later with Robbie McDaid's powerful shot being blocked by the legs of the Portadown keeper. Next up it was Robbie's turn to set up a great chance for Rhys but his goalbound strike was superbly saved by Gareth Buchanan. The Glens weren't to be denied a second though and it arrived on 65 minutes. Marcus Kane's deep cross from the left was missed by both Jay Donnelly and Portadown skipper Luke Wilson. It broke kindly for Robbie McDaid though and he netted a simple chance from inside the 6-yard box. There was almost a third goal within a minute of the second. This time McDaid turned provider for Hrvoje Plum but Buchanan denied the Croatian with a fine stop. 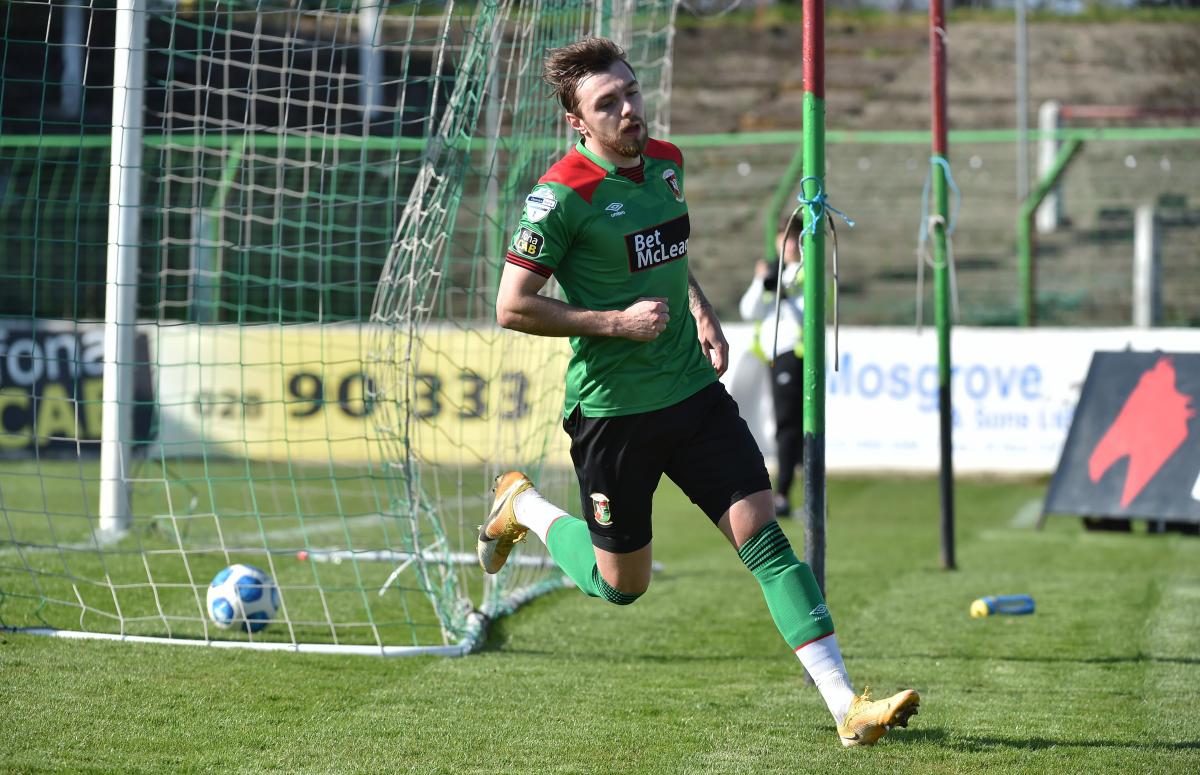 Hrvoje Plum was then fouled around 25 yards from goal. The set piece specialist stepped up but saw his shot deflect off the defensive wall and behind for a corner. Robbie McDaid was then replaced by Jamie McDonagh and the Glentoran number 7 would have a decisive impact. On 75 minutes an exquisite pass from Plum created an opportunity for top Glentoran marksman, Jay Donnelly. Donnelly tried to create an angle for a shot but was blocked by Greg Hall. The visitors had the chance to pull a goal back on 78 minutes when Gael Bigirimana was adjudged to have committed a foul just outside the box. Sam Warde stepped up to take the free kick but the Glentoran defensive wall stood firm and the ball was cleared. 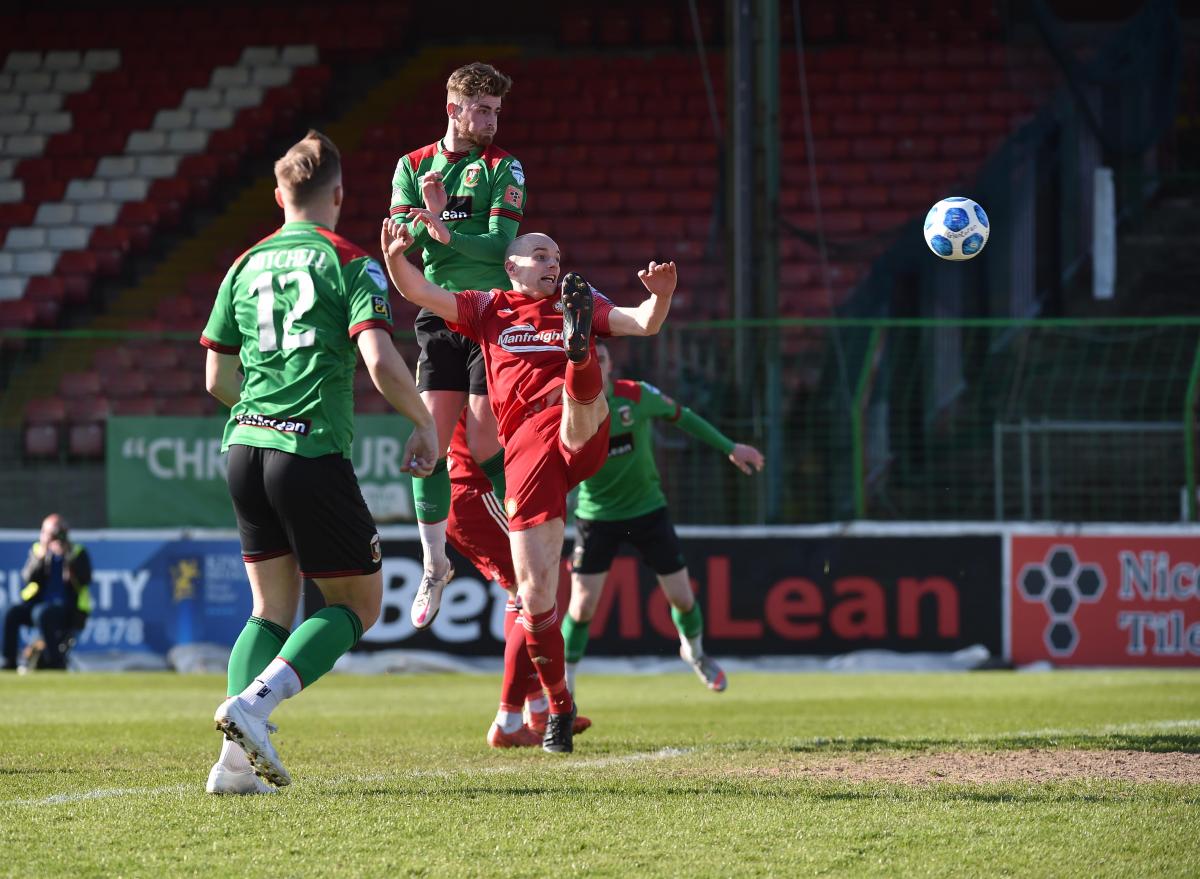 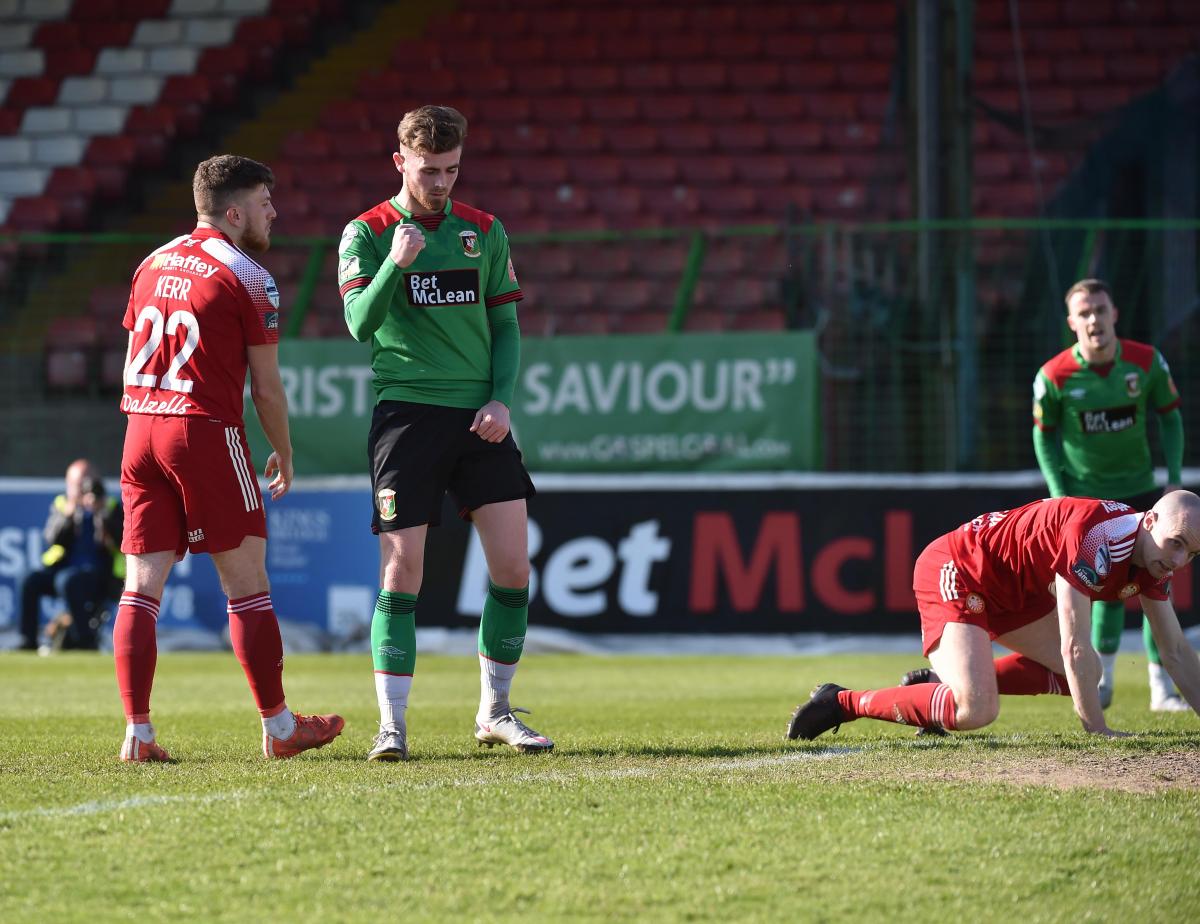 Glentoran made the game safe on 82 minutes when Rory Donnelly netted his second of the afternoon. Jamie McDonagh put in a superb cross from the right and Rory Donnelly rose between Nathan Kerr and Greg Hall to head home from 6 yards out. A couple of minutes later the game really was over when substitute Andrew Mitchell scored with a stunning strike from the edge of the box. Bigirimana and Marshall linked up well before Marshall found Rory Donnelly. Donnelly passed to Mitchell on the right corner of the 18-yard box. As Mitchell turned he initially lost possession but quickly regained it before striking the ball, left footed, past a helpless Buchanan and into the far corner of the net. That was Andrew Mitchell's third game in a row wher he came of the bench and was directly involved in a goal; winning the free kick for the decisive second goal at Warrenpoint, providing a superb assist for Jay Donnelly's late winner against Crusaders last Saturday and then getting on the scoresheet himself today. 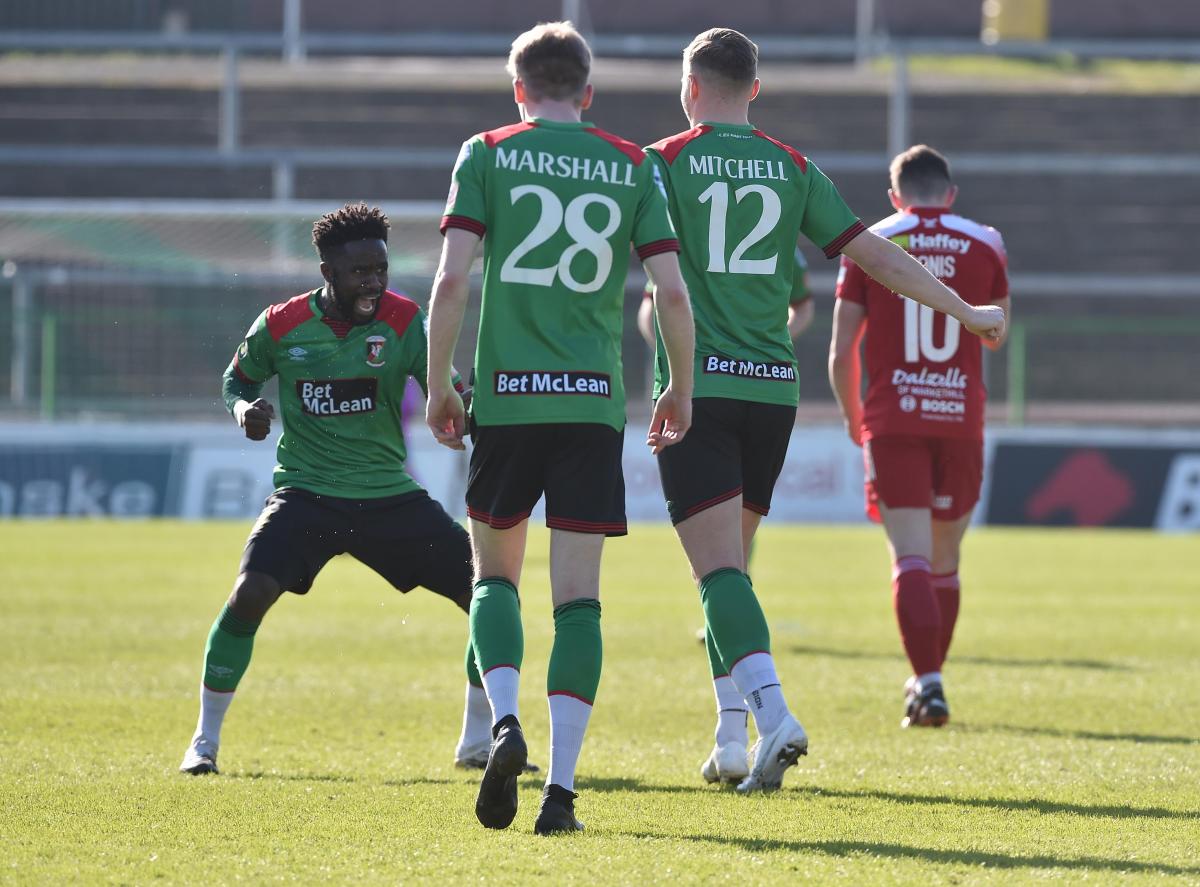 There were several more opportunities for the Glens to extend their lead but as they pressed forward looking for a fifth goal Portadown hit them on the break. Lee Bonis really should have scored but curled his shot wide of the far post. So the Glentoran defence, once again superbly marshalled by Luke McCulough and Paddy McClean, recorded a second consecutive clean sheet and the win moved them to within 3 points of Coleraine who we play twice later in the month. Exciting times. 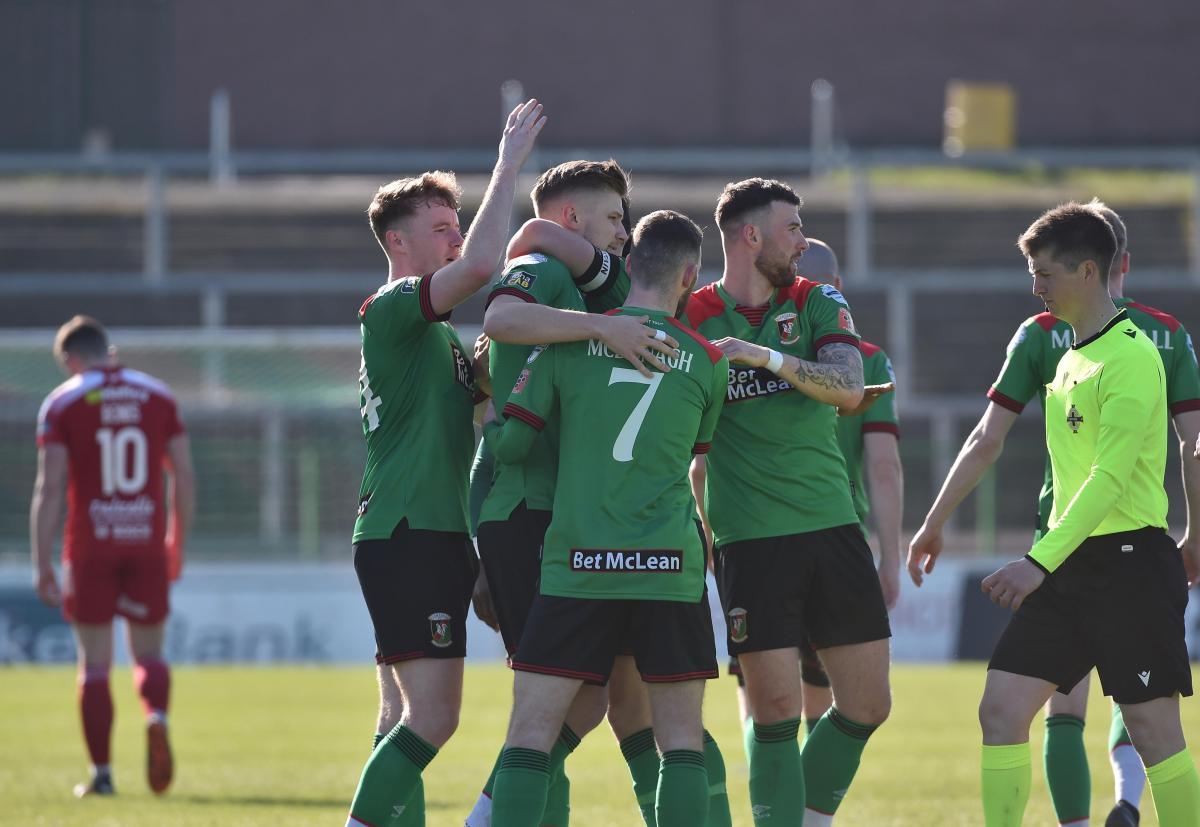 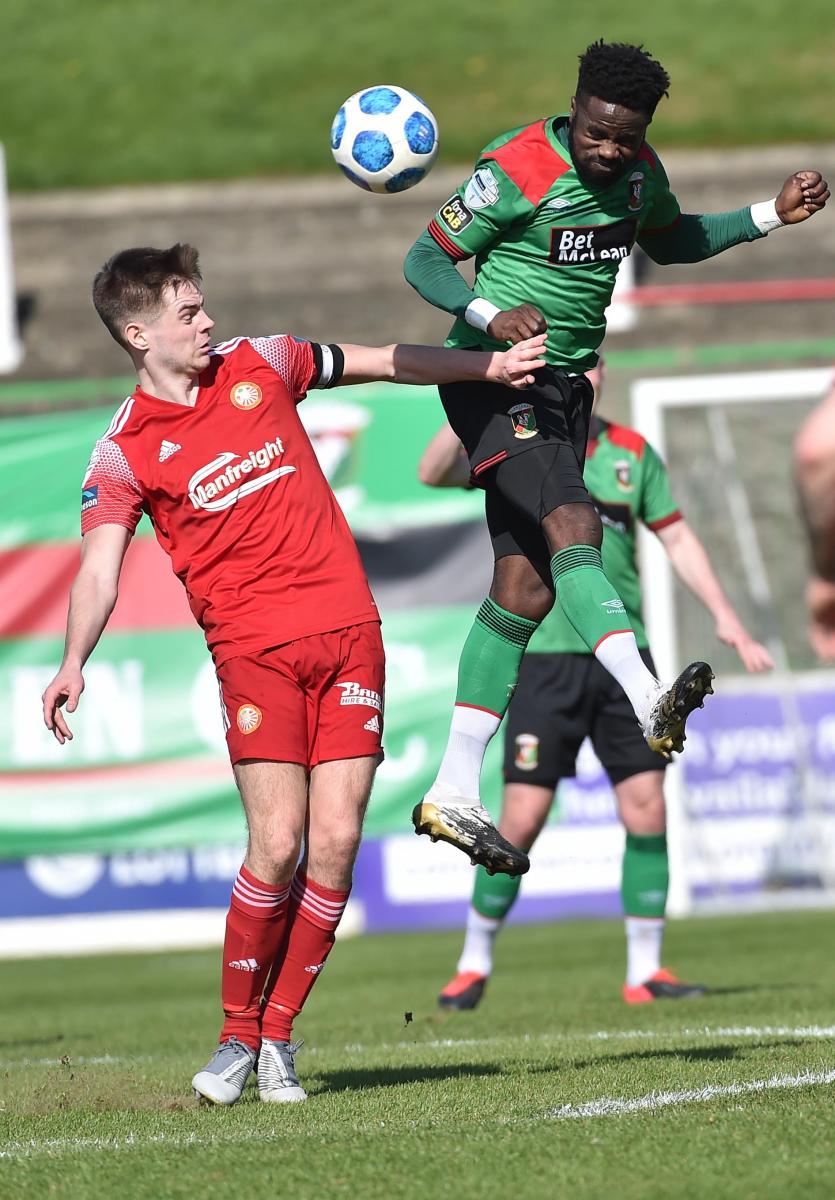