Curtis Allen set the Glens on their way to 3 points with his 100th goal for the club in today's Danske Bank Premiership fixture against Ards at the Oval. Allen was on target again in the second half with Robbie McDaid and Marcus Kane getting the other goals. 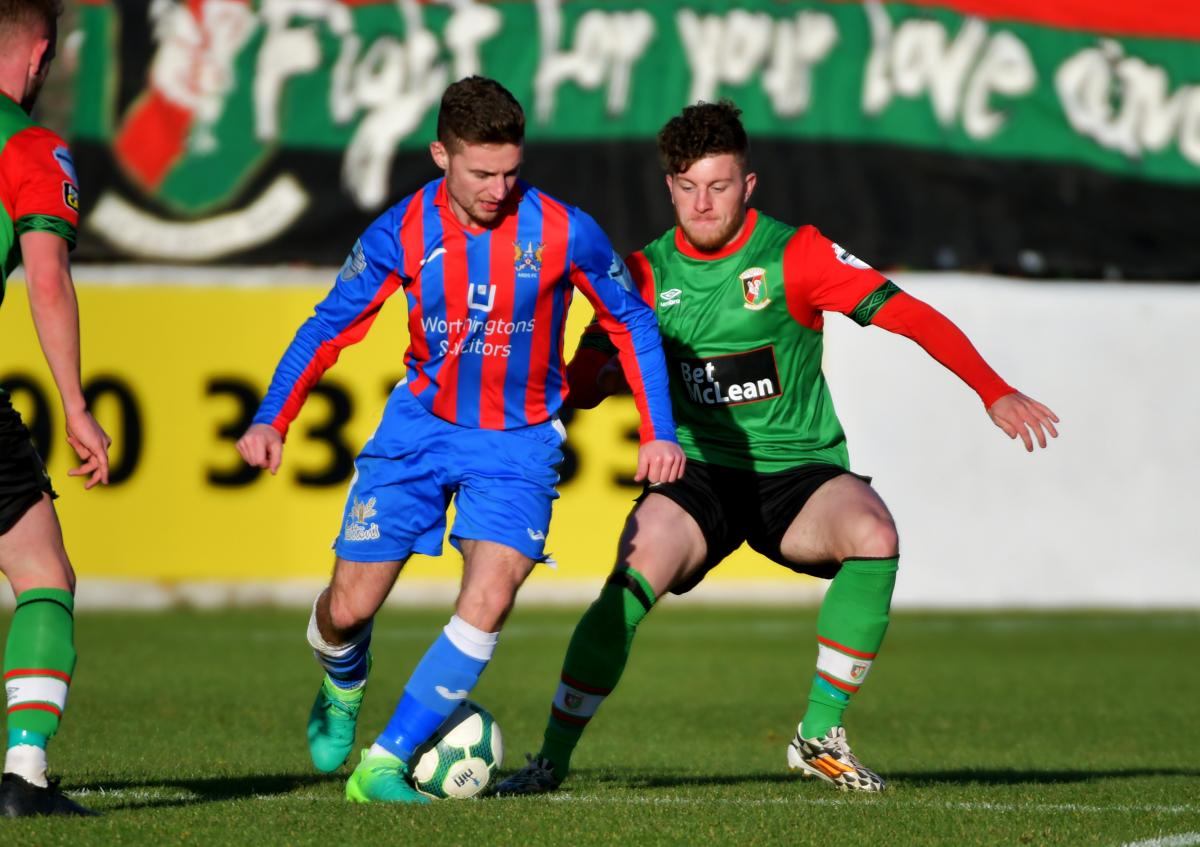 The first chance of the game came on 4 minutes when the Glens broke down the right hand side; Robbie McDaid powering past the Ards defence and firing a ball into the danger area. It was cleared to Dylan Davidson but his cross was headed just wide by John Herron. 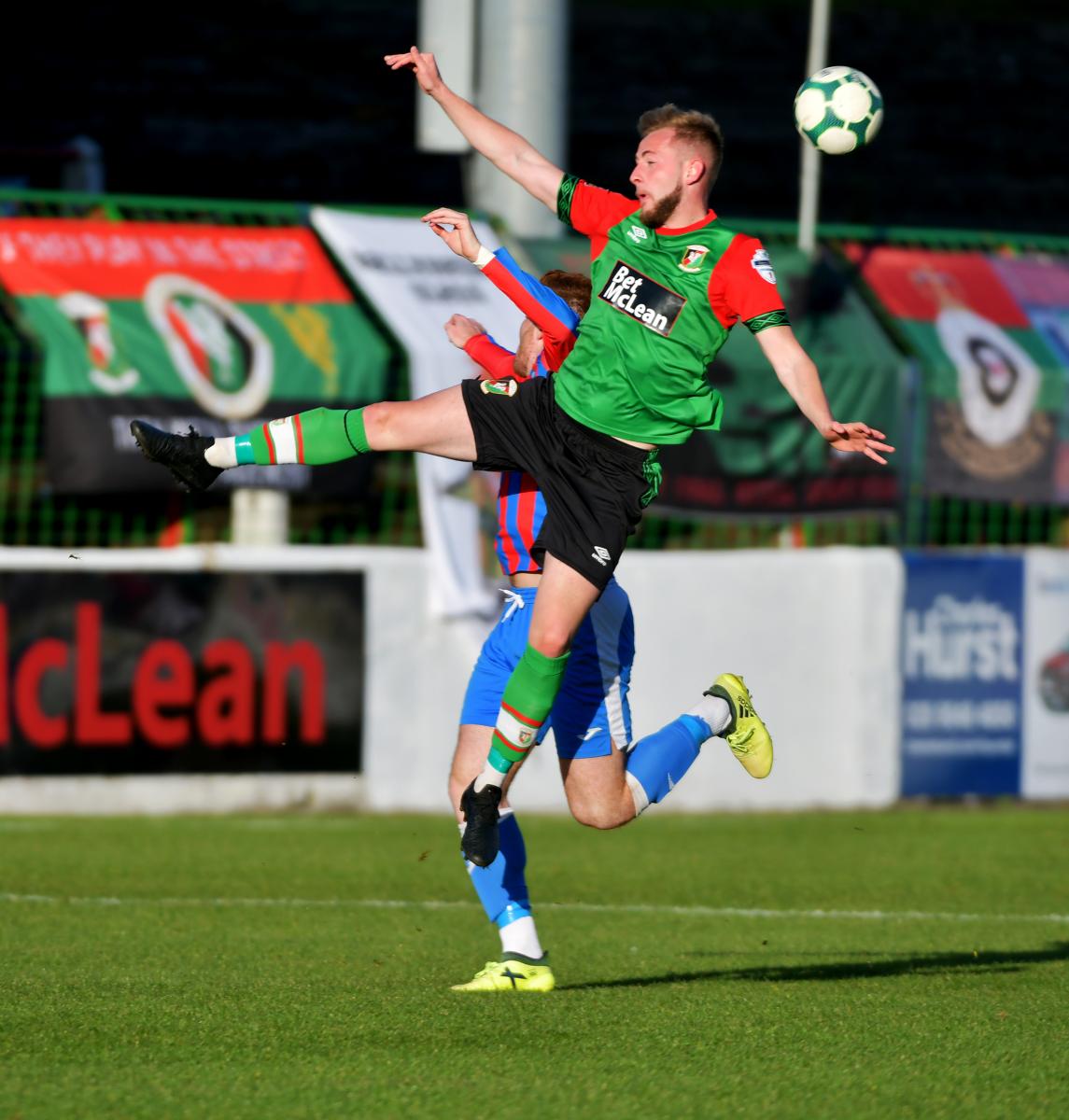 On 12 minutes Curtis Allen finally notched his 100th Glentoran goal. Ross Redman clipped the ball forward but seemed to have over hit it however defender David Elebert and goalkeeper Samuel Johnston got in a bit of a muddle and Allen nipped in to slot the ball home from an acute angle. Midway thtough the half, following an exchange of passes involving Allen and Davidson, Jon Herron had a chance to double the home side's advantage but headed wide of the target. 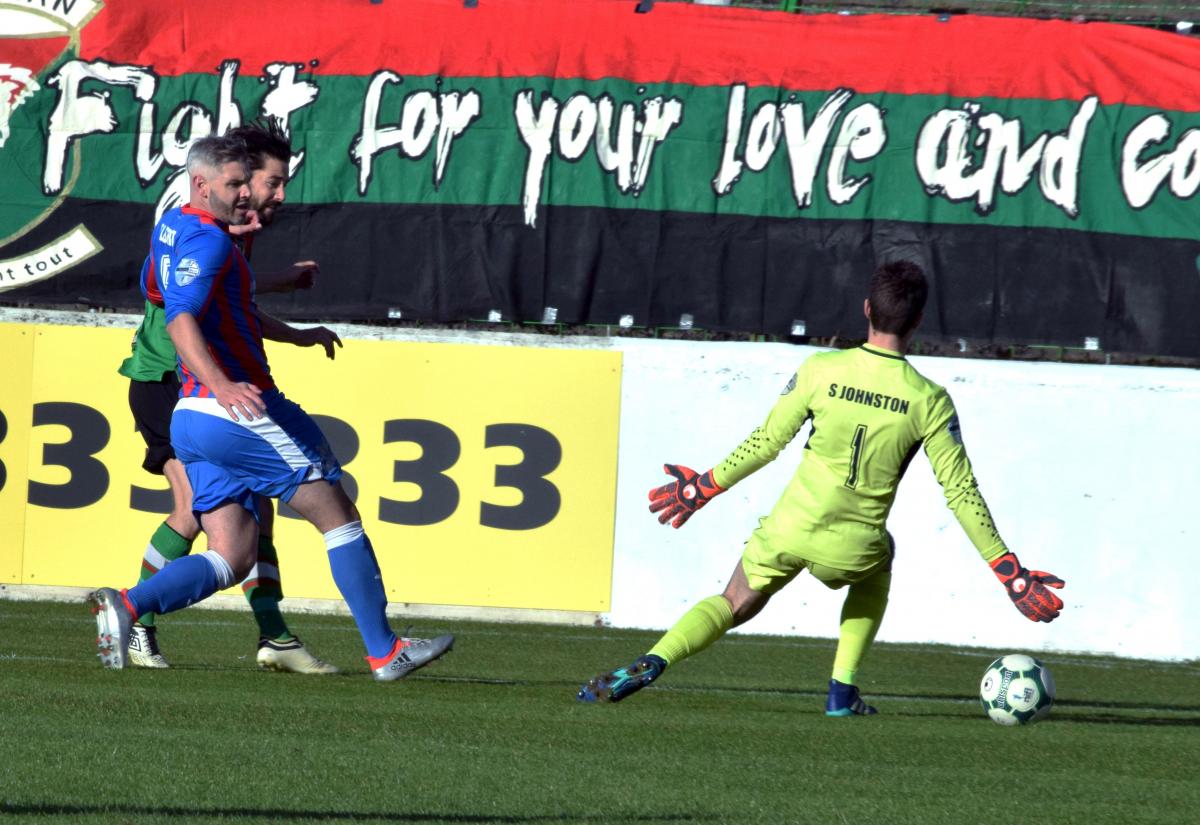 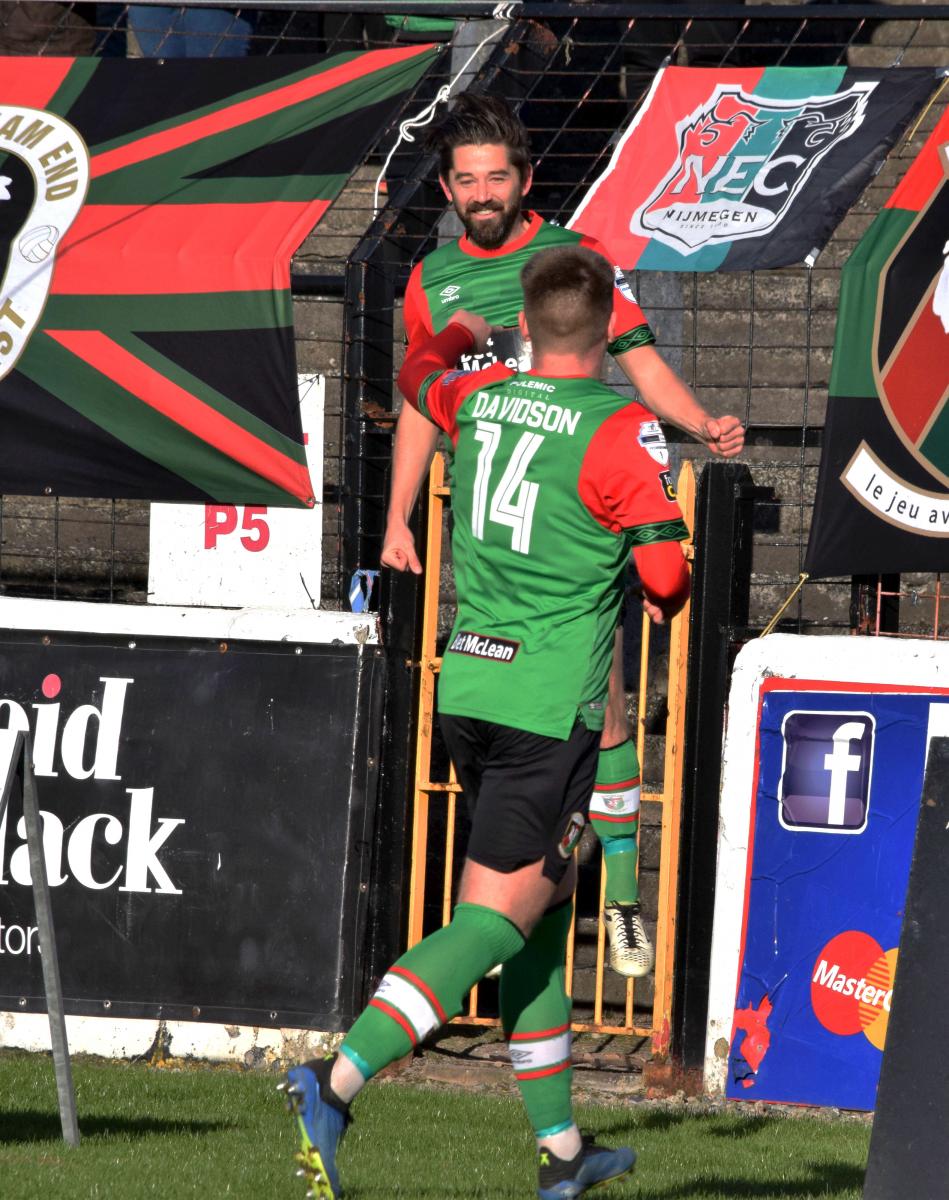 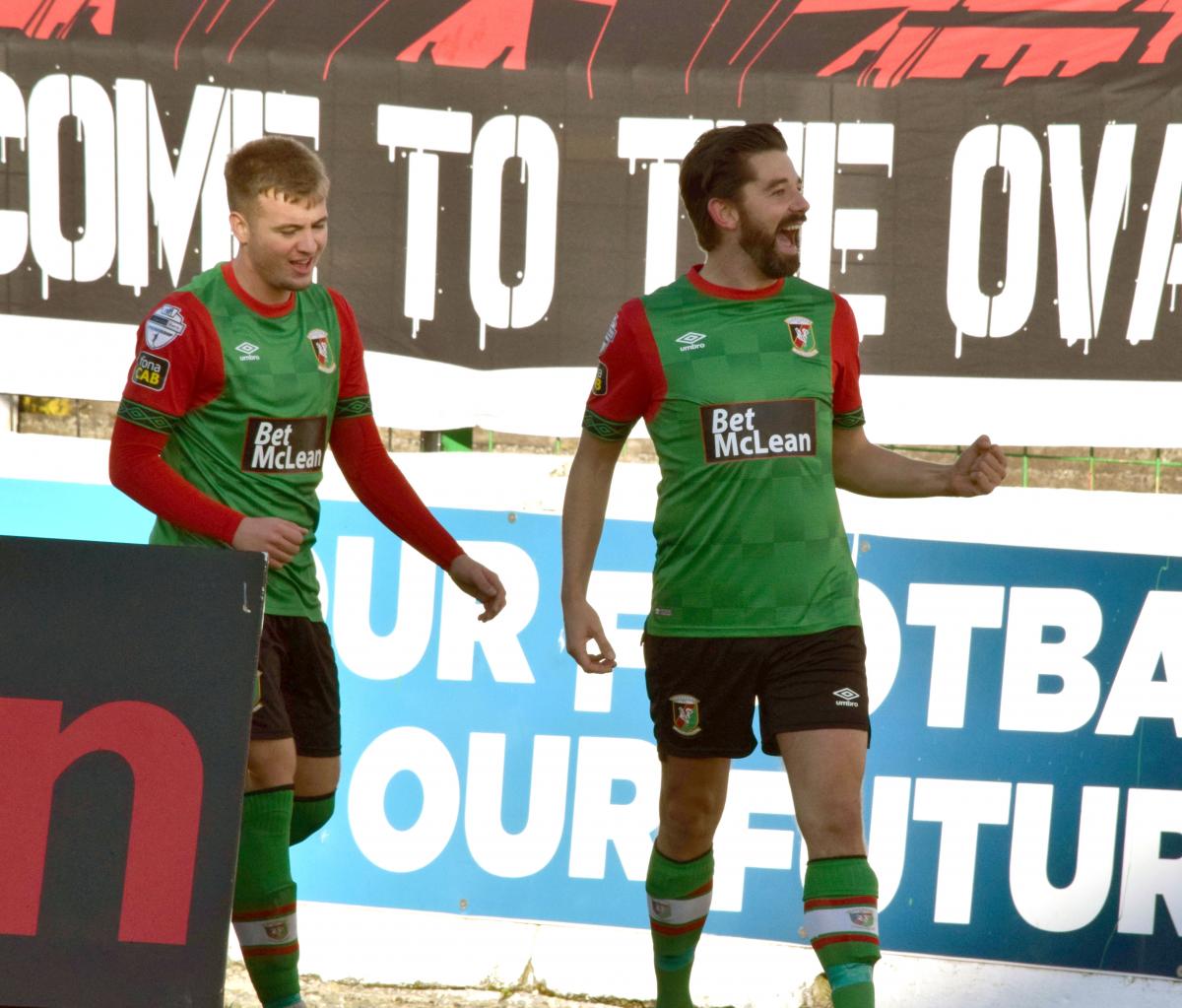 Ards skipper, Gareth Tommons then forced a corner but the set piece was quickly cleared and Dylan Davidson broke forward before finding Ross Redman on the left. The full back's cross was met by Robbie McDaid but his header didn't trouble Johnston. On 26 minutes another excellent break down the left saw Redman set up a great opportunity for Herron but the Scotsman's shot crashed off the crossbar. Just before the half hour mark Ards had a couple of chances. Firstly Joshua Kelly fired over and then Jonathan Frazer shot straight at Elliott Morris. Former Glentoran midfielder, Kym Nelson had the chance to level things up on 39 minutes but his 25-yard free kick hit the defensive wall and was cleared. 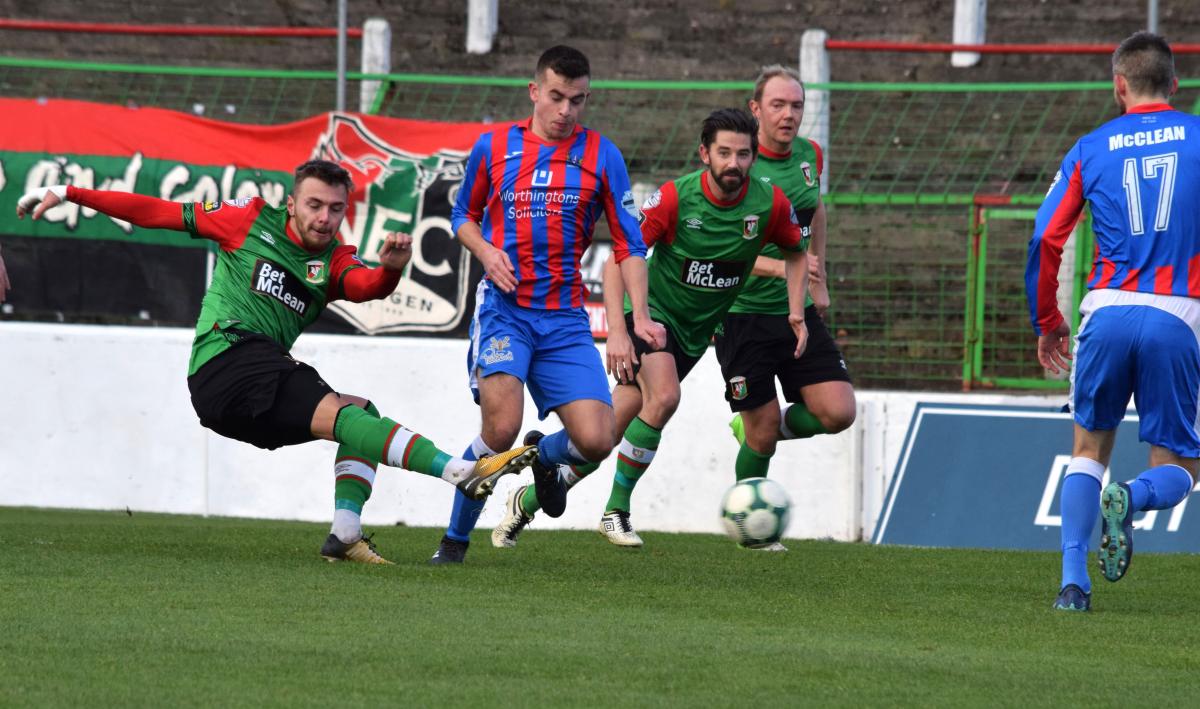 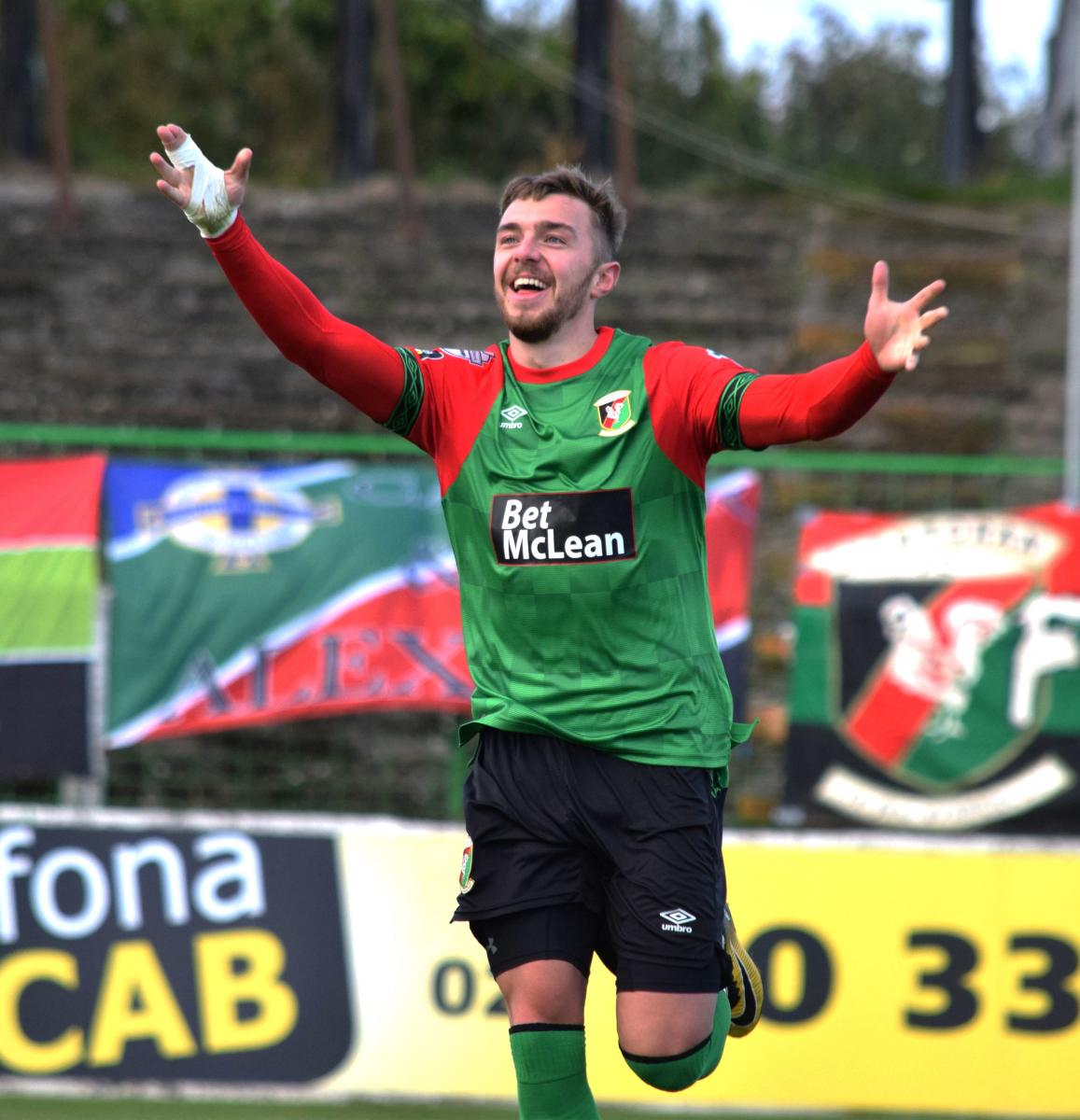 A minute before halftime, the Glens doubled their advantage. Herron found Redman and he drove past a couple of Ards defenders before finding Robbie McDaid. McDaid took a touch before drilling the ball into the bottom right hand corner of the net from 12 yards. It was Robbie's 5th goal of the season and 16th overall for the club. Halftime: Glentoran 2-0 Ards. 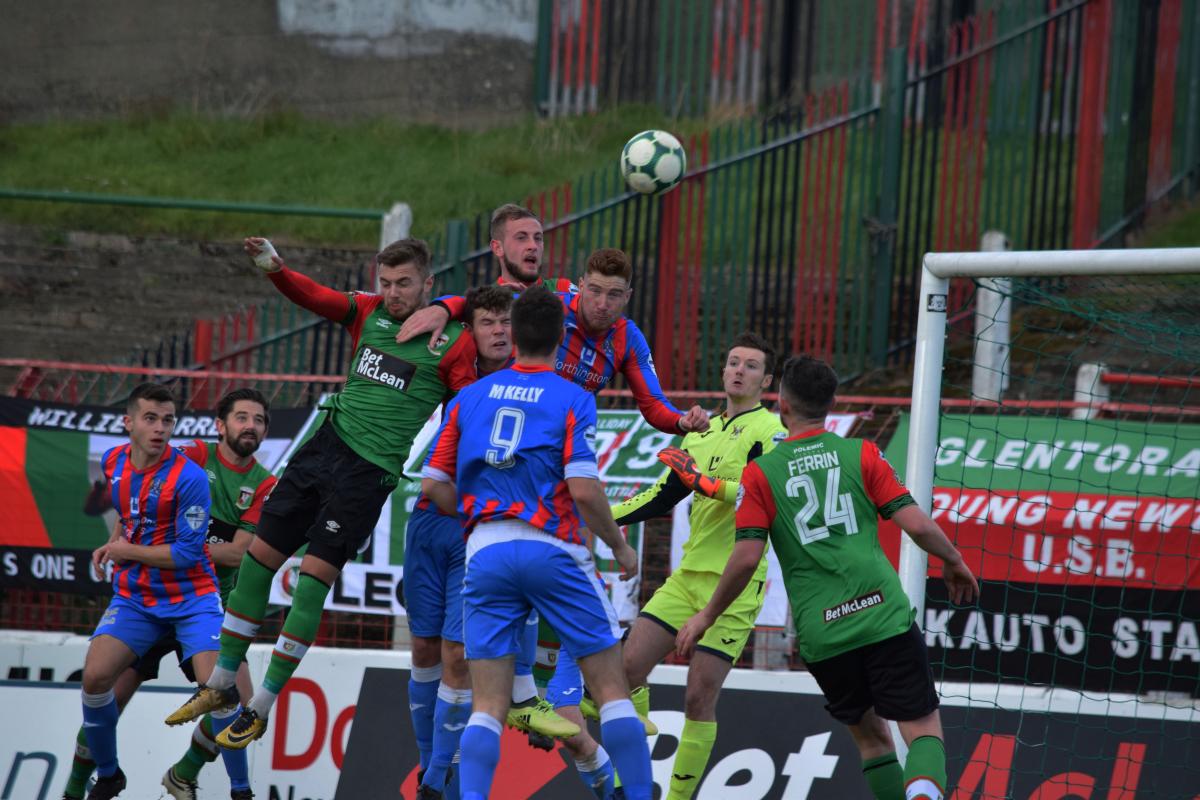 On 47 minutes McDaid was taken down in the 'D' and from the free kick almost made it 3-nil; Allen's shot flying inches past the upright. McDaid then brought a good save out of Samuel Johnston before a mistake from Dylan Davidson, losing possession midway inside his own half, presented Ards with the chance to pull a goal back. Unfortunately for the visitors substitute Michael McLellan fired wide. On 54 minutes a cross from Nathan Kerr found Marcus Kane but his curling effort was just off target. 2 minutes later and it should have been 2-1.  Kym Nelson's through ball played in Michael McLellan but the ever reliable Elliott Morris raced from goal and produced an excellent save. 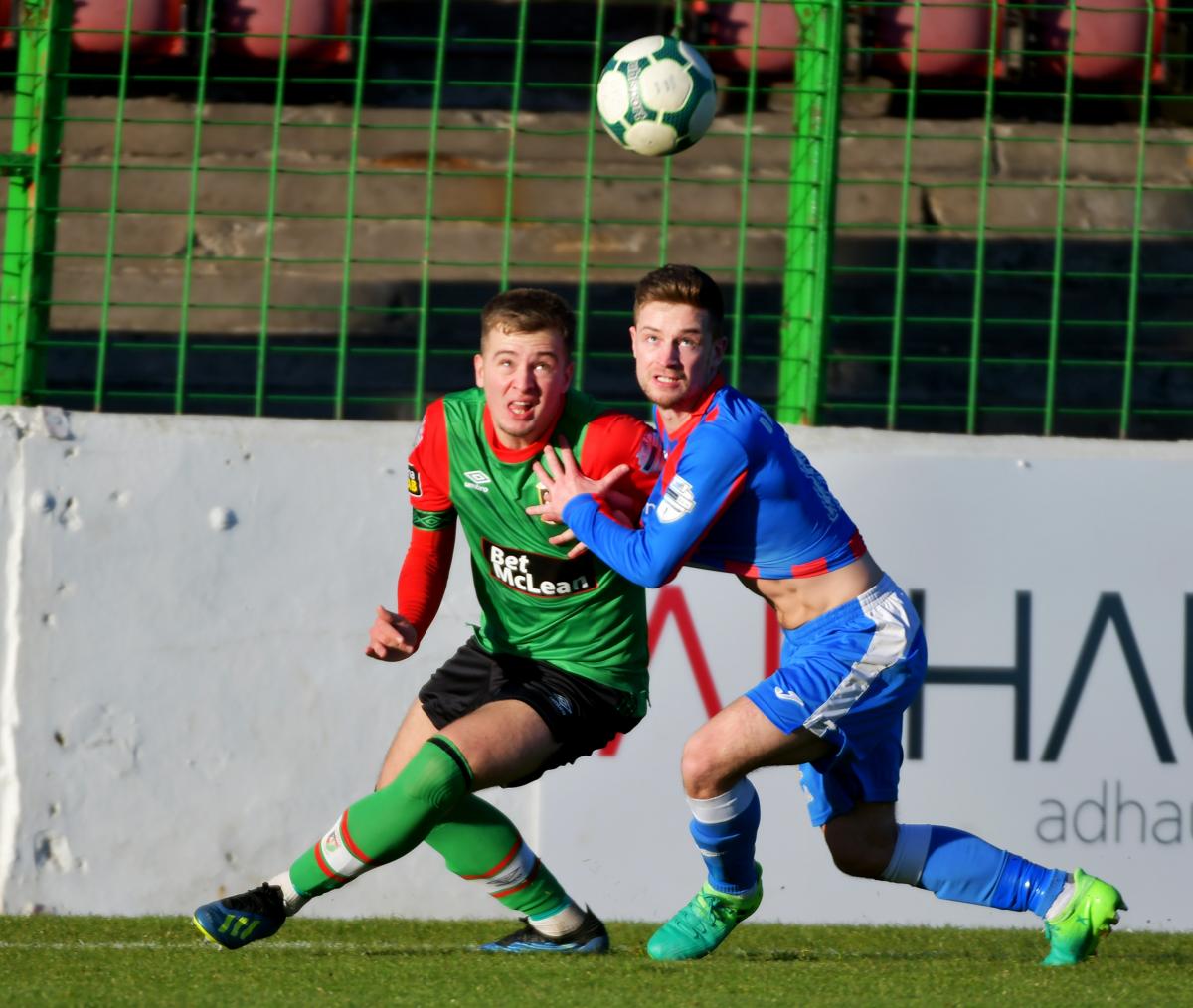 On the hour mark Glentoran made the points safe with a third goal. Ross Redman's throw in from near the corner flag almost found Allen but Callum Byres attempted headed clearance fell to Glentoran captain Marcus Kane and his superb volley found the far corner of the net. Kane almost grabbed another 3 minutes later when his wind assisted cross almost caught out Johnston in the visitors' goal but he managed to tip the ball around the post for a corner. Chances then at either end with Michael McLellan shooting straight at Morris and then Kerr's cross was headed wide by McDaid. 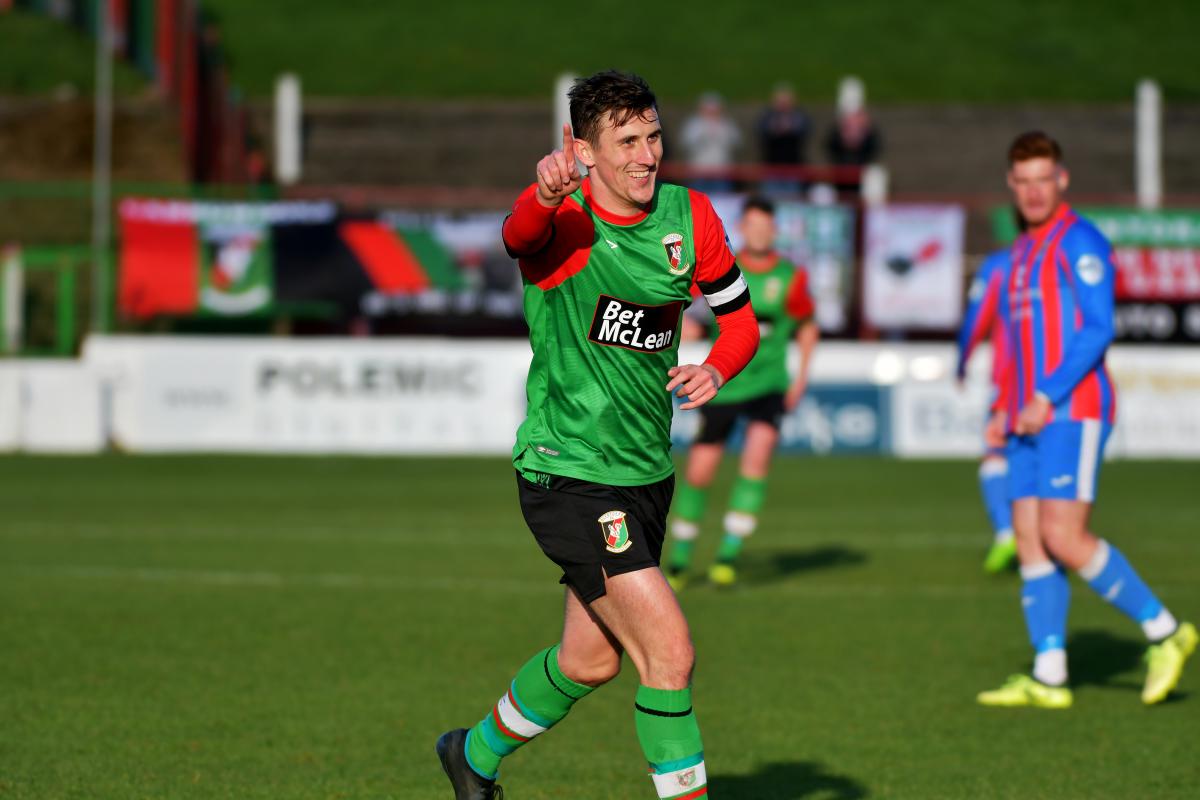 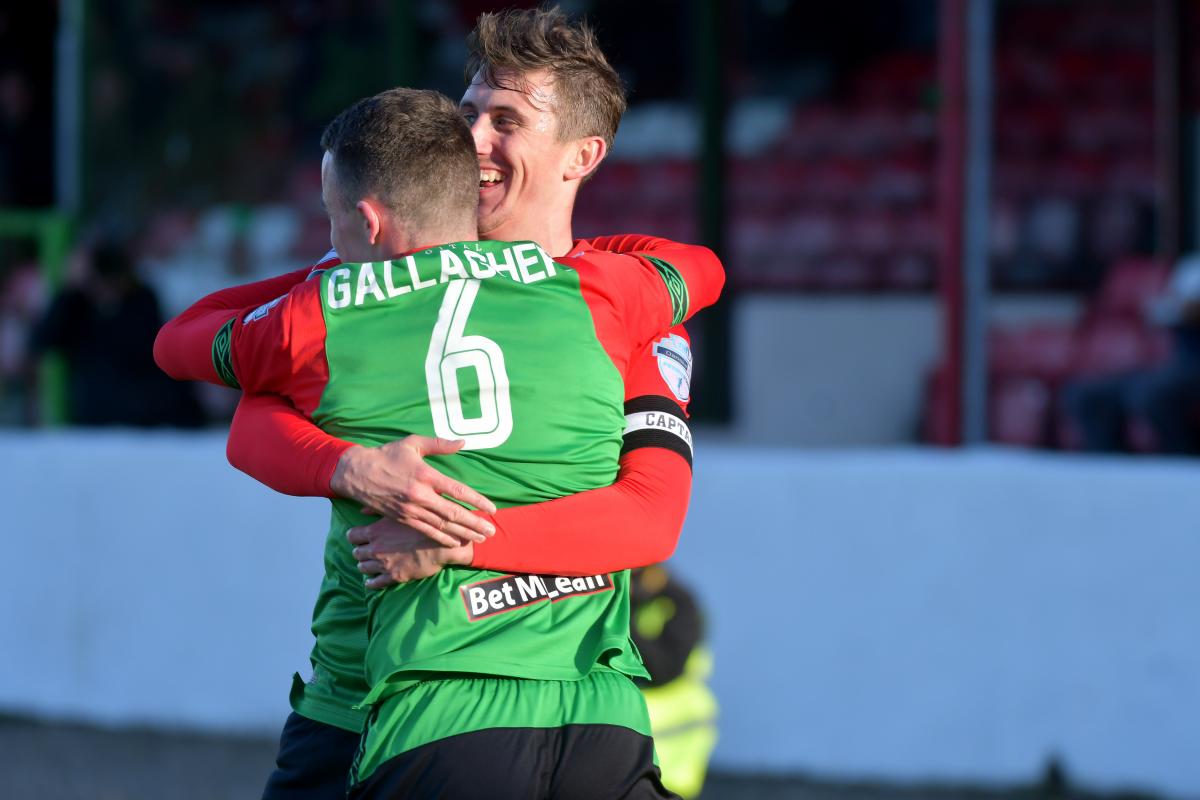 On 71 minutes Curtis Allen got his second and Glentoran's fourth. The excellent Chris Gallagher robbed Kym Nelson midway inside the Ards half and his exquisite pass found Allen 20 yards from goal. The Glentoran number 9 steadied himself before slotting the ball past Johnston and into the bottom left hand corner of the net. The road to 200 has begun! In the last 10 minutes there were chances for both Allen and McDaid to pile even more misery on Ards whilst at the other end Michael McLellan was again denied by Morris. 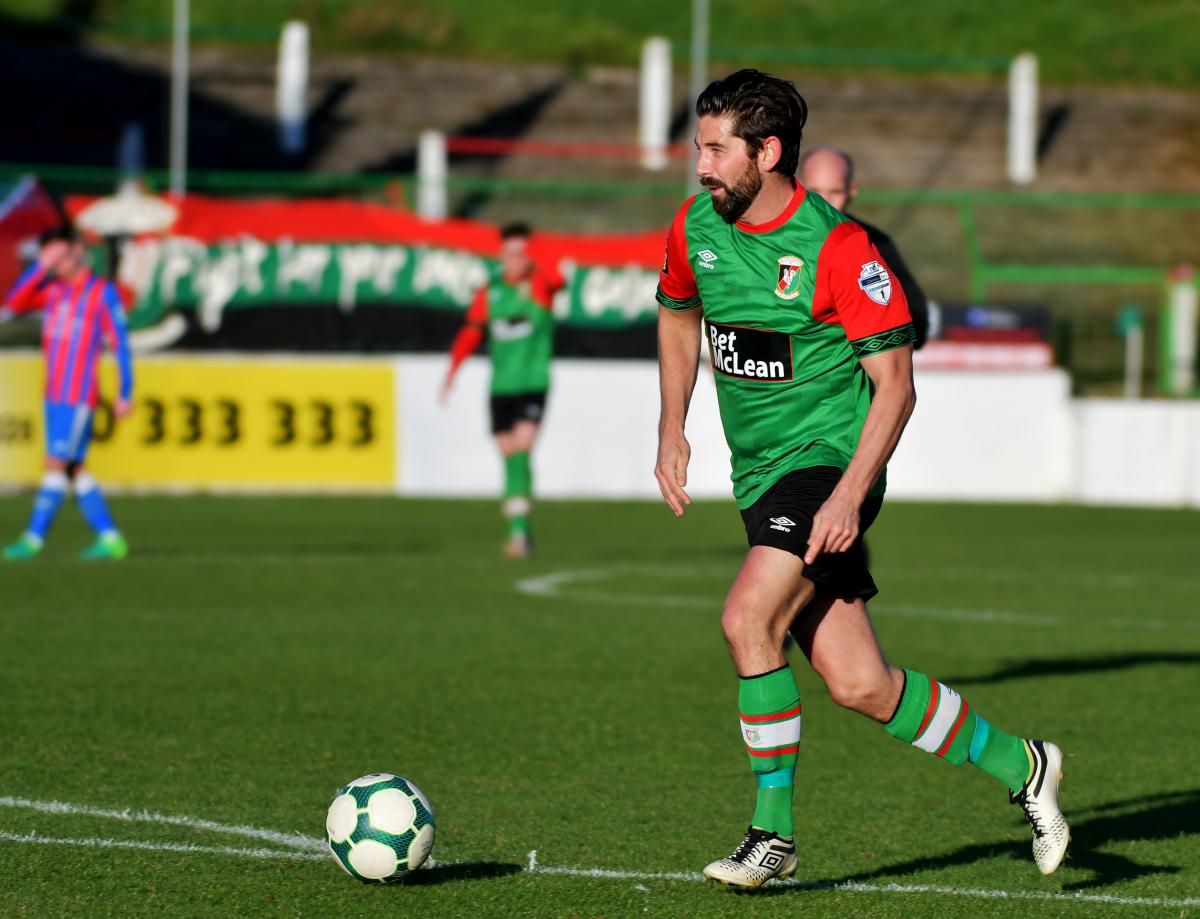 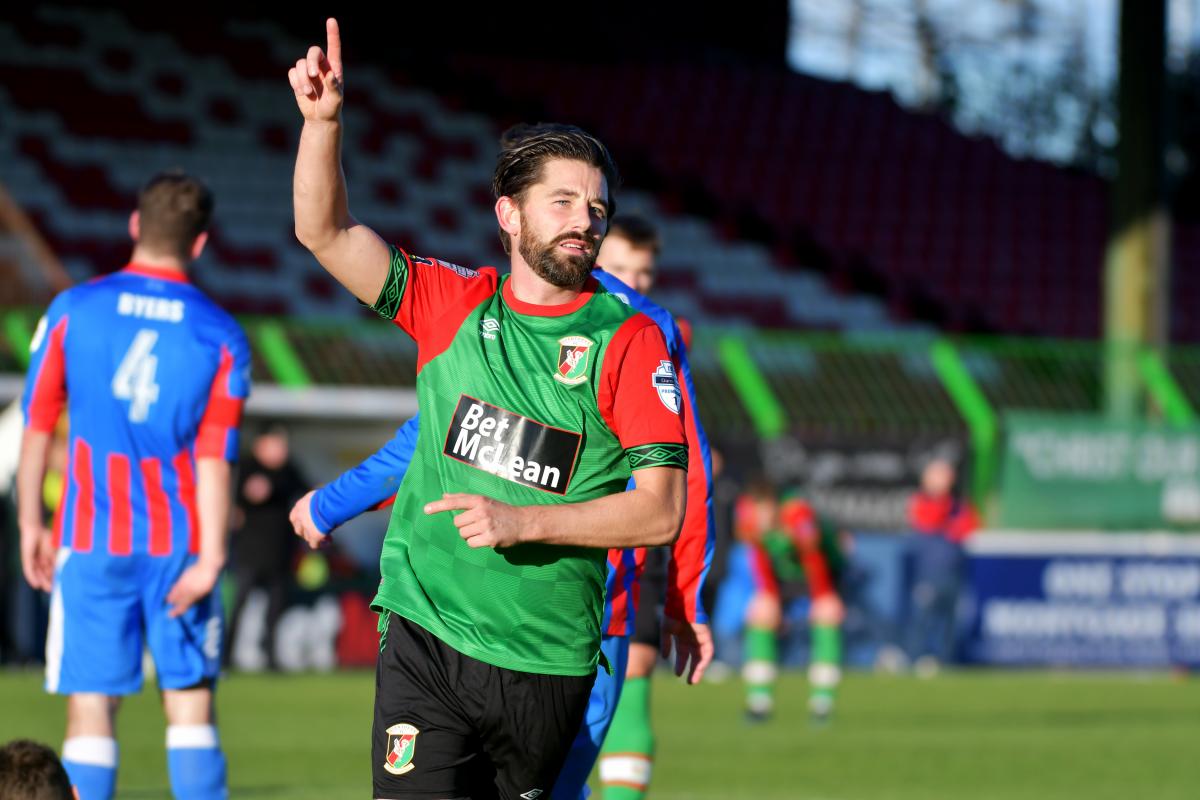 So Glentoran recorded their biggest win of the season, scoring four goal and keeping a clean sheet. Joe Crowe and James Ferrin were excellent in the centre of defence whilst Chris Gallagher and John Herron controlled the midfield. The only downside was an injury time red card for substitute, John McGuigan. 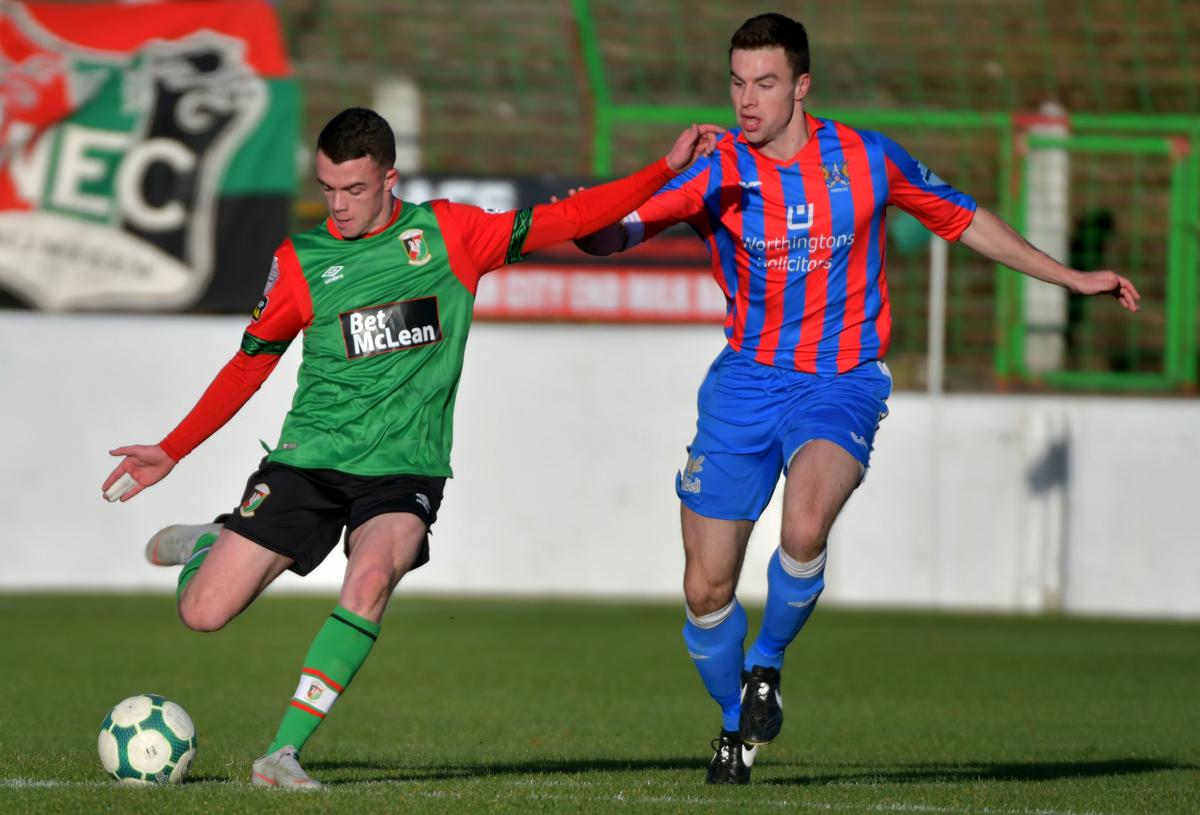 Next up is a home tie against Coleraine in the Bet McLean League Cup - Tuesday night with a 7:45pm kick off. 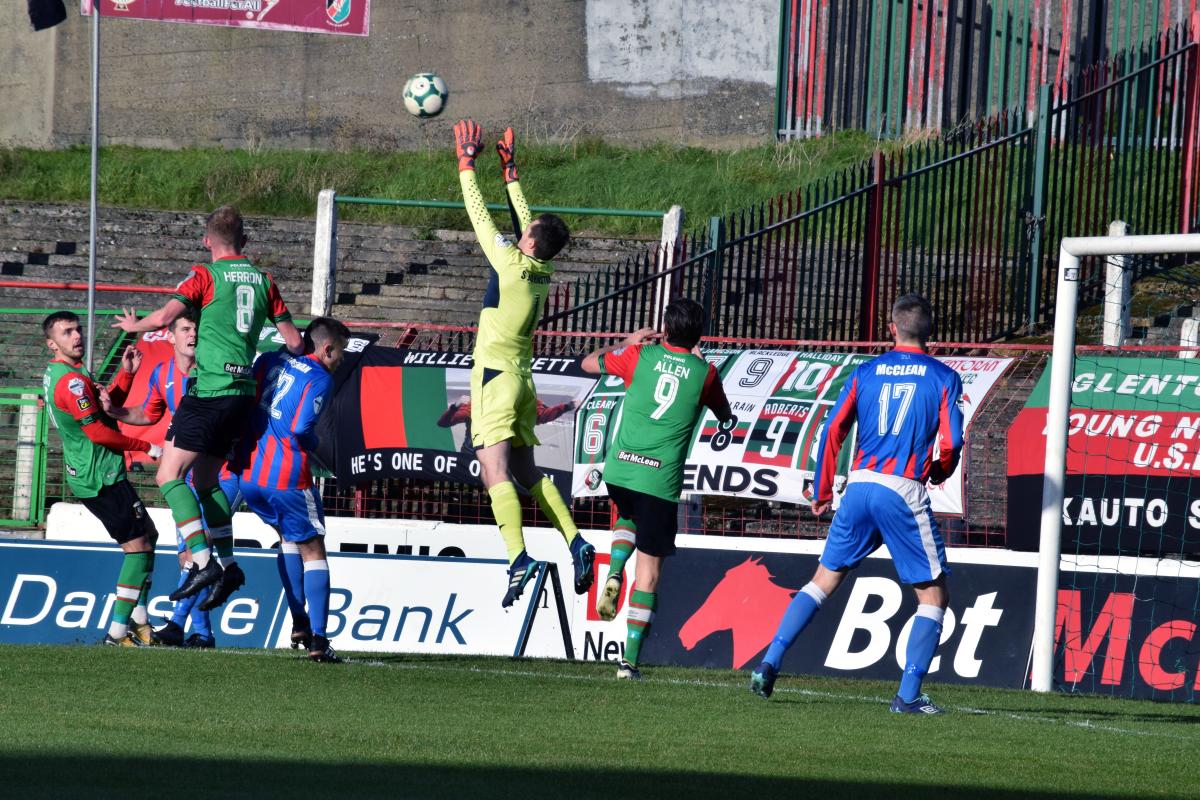