There was heartbreak for Glentoran fans at the Oval this afternoon as a 2-0 lead after 11 minutes was squandered to see Glenavon go home with the points.  Not surprisingly after last week’s performance against Ballymena Eddie Patterson named an unchanged side and it looked as if we were in for more of the same as the Glens took the lead with just a couple of minutes on the clock.  A Niall Henderson free kick was swung into the Glenavon area, goalkeeper Alan Blayney came flying off his line but Curtis Allen was first to the ball and directed his header into the empty net.  Allen had another chance just a minute later, blasting over after being set up by Stewart and the visitors had their first chance soon afterwards, Eoin Bradley delaying a chance to shoot and allowing Barry Holland to clear.  However it was the Glens who doubled their lead on 11 minutes; some great work in midfield from Steven Gordon, Stephen McAlorum and Kym Nelson led to the ball being slipped through to Stewart who picked his spot and sent a superb curling shot past Blayney. 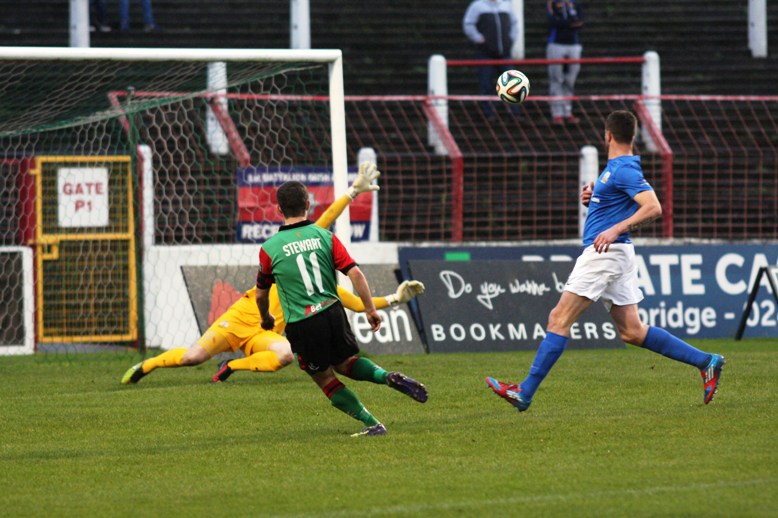 The Glens were well on top at this stage and could have ended the contest on 20 minutes as Stewart was put through once again, but Gareth McKeown got back to make a last ditch tackle.  Any attacking threat from the visitors was easily being snuffed out by the Glentoran defence with Jay Magee particularly impressive in the centre.  However after 25 minutes came what may have been the turning point in the game as he limped off to be replaced by Calum Birney.  Glenavon gave warning that they weren’t going to lie down as Rhys Marshall bore down on goal but was denied by Elliott Morris who was quickly off his line.  However just a couple of minutes later the Lurgan Blues grabbed themselves a lifeline.  A long ball into the box was knocked down by Kyle Neill, Ciaran Caldwell laid the ball off to Gary Hamilton and the player-manager, bizarrely eligible for today’s game despite last week’s red card, blasted into the roof of the net.  Two minutes later they were back level with the Glens once again failing to deal with a high ball, this time from a Shane McCabe free kick, and in a goal mouth melee Marshall was on hand to force the ball over the line.  Glentoran may well have been happy to go in level at half time and hopefully regroup for the second half but in first half stoppage time Hamilton once again found himself in space in the box and his shot took a wicked deflection off Barry Holland to wrong foot Morris and give Glenavon a half time lead. 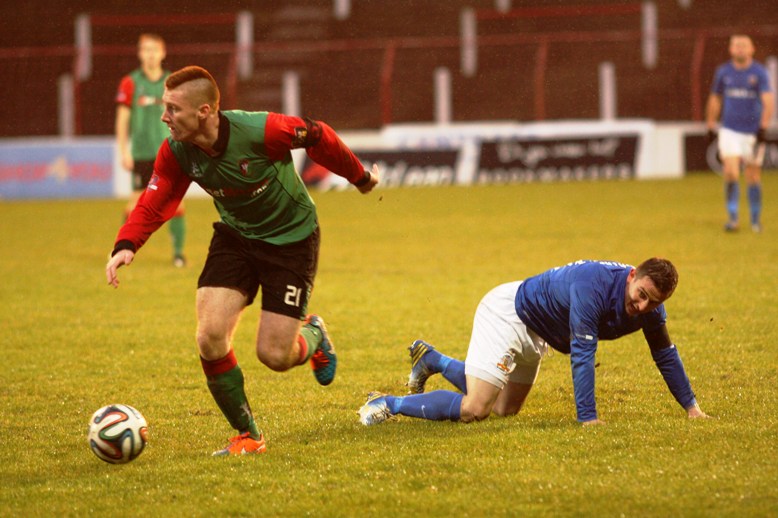 Deteriorating conditions, a Glentoran side low in confidence and a Glenavon side who were happy to run the clock down combined to make it a dull opening 15 minutes in the second half.  The first real chance didn’t come until the 64th minute when Bradley should have done better with a free header from a Hamilton cross and soon afterwards Hamilton was once again the provider, setting up Caldwell to drive the ball just wide.  Glenavon looked the likeliest scorers and they eventually extended their lead in the 73rd minute.  A long clearance found Kyle Neill in acres of space and with a linesman’s flag neither forthcoming nor justified the former Glentoran midfielder drove the ball high into the net.

The game was now over as a contest with the Glens offering little threat, save the odd flash of trickery from Stewart, and indeed Glenavon could have added to their tally.  Along with Hamilton, Bradley was a thorn in the side of the Glens throughout the afternoon and late in the game had a swerving free kick beaten out by Morris and a good shout for a penalty when he looked to be brought down by Niall Henderson.  In the end the game petered out to its inevitable conclusion and the management team will looking for a vast improvement next week as we travel to Ballinamallard in the League Cup followed by a Windsor Park showdown with Belfast rivals Linfield next Saturday. 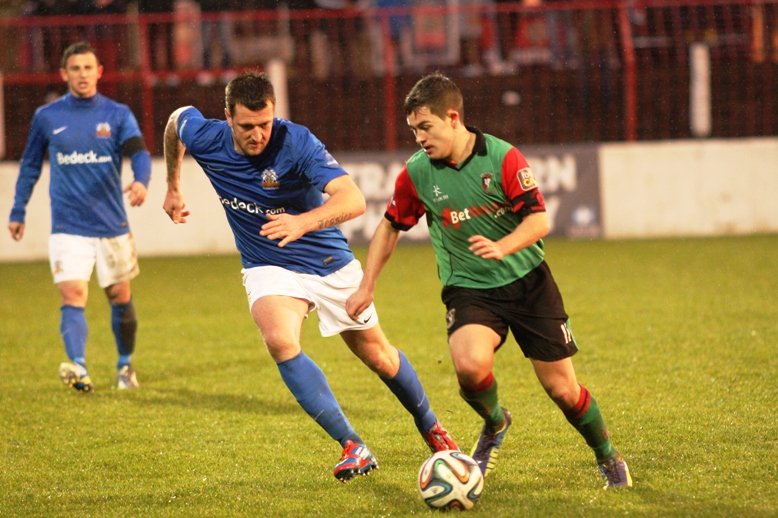