A dramatic period of stoppage time at the Oval saw Glentoran suffer their first defeat of the season as Linfield progressed to the semi finals of the County Antrim Shield.  Despite speculation that there would be changes to the usual line ups both managers fielded their strongest possible teams and it was the Glens who were the dominant side in the first half.  Andy Waterworth fired over the bar from a Richard Clarke corner after just two minutes and soon afterwards Linfield goalkeeper Alan Blayney was lucky to get away with a fumble from another Clarke corner.  Jay Magee was next to get in on the action, curling a twenty yard effort just over the bar. 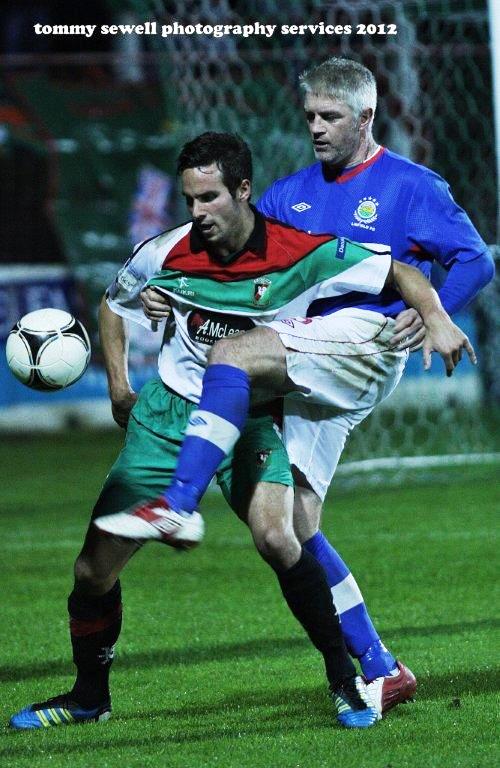 Waterworth and Marcus Kane were causing the Linfield defence all sorts of problems and these two combined on seventeen minutes, the big striker’s cross latched onto by Kane who was denied by a last ditch tackle from William Murphy.  Linfield had their first meaningful effort on goal after twenty one minutes with Michael Gault’s shot from the edge of the box well saved by Elliott Morris.  This should have served as a warning to the Glens defence as the Blues took the lead three minutes later.  Daryl Fordyce sent Jamie Mulgrew away down the right and his low driven cross was turned in from close range by Brian McCaul.  The lead lasted just ten minutes as the Glens equalised with a classic counter attacking goal.  A Linfield free kick into the Glentoran box was cleared to Jason Hill who set off on a powerful run through the centre.  His pass sent Sean Ward flying away down the right and the captain’s low cross was met at the far post by Jim O’Hanlon who poked it home from close range with Blayney stranded.  The Glens almost took the lead three minutes from the break when, after having his initial shot blocked, Waterworth had his follow up effort well saved by Blayney.

Linfield came out with much more purpose in the second half, forcing Jimmy Callacher to head over his own cross bar soon after the re-start and coming closer still when Stephen McAlorum cleared a Murphy header off the goal line.  Shortly afterwards Murphy was in action at the other end of the field when he was out-paced by Waterworth but Blayney came to his rescue with a brave block.  Both teams then had chances to take the lead, a goal mouth scramble from a Linfield corner almost seeing the ball squirm over the line and five minutes later a brilliant Ward run and cross was met with a McAlorum header which was clawed away by Blayney.

With nine minutes left there was almost embarrassment for Murphy as he came within a whisker of scoring a spectacular own goal from a Clarke corner, but a couple of minutes later it was Linfield who snatched the lead.  Elliott Morris did well to come out to block a through ball to Peter Thompson, but the rebound fell kindly to Daryl Fordyce who was able to drive the ball home from ten yards.  With time fast running out Glens manager Eddie Patterson made a last throw of the dice with a triple substitution, including the return of Stuart Elliott to first team action at the Oval.  The ploy seemed to have paid off as, in the first minute of stoppage time, a David Howland free kick from halfway was met by the head of Jimmy Callacher who sent the ball into the bottom corner giving Blayney no chance.  However there was still time left on the watch and, with the Glens’ minds possibly still on their celebrations and extra time, Linfield broke away down the right straight from the kick off.  A high hanging cross was met by an unmarked Peter Thompson who sent his header into the roof of the net leaving no way back for the Glens.