Glentoran produced a lacklustre end to a disappointing year as they threw away a two goal lead at home to Dungannon Swifts on New Year’s Eve. Two second half strikes from Andy Mitchell ensured the home crowd left frustrated after witnessing their side fail to convert a two goal lead for the second home game in a row. Glens’ boss Gary Haveron was forced into 3 changes from the side that drew with Linfield on Boxing Day with Tiernan McAuley, James Ferrin and Ciaran Caldwell replacing Calum Birney, Eric Foley and the suspended Stephen McAlorum. One other change today saw Glentoran playing in red, a set of one-off jerseys which were sponsored and sold in aid of Zakky Brennan’s journey. Zak is a young Belfast boy who has been battling rare childhood cancer neuroblastoma. All money raised from today’s shirts will go towards the cost of a new treatment for Zak in America. All at Glentoran were delighted to help and we wish Zak and his family all the best in their journey in 2017. 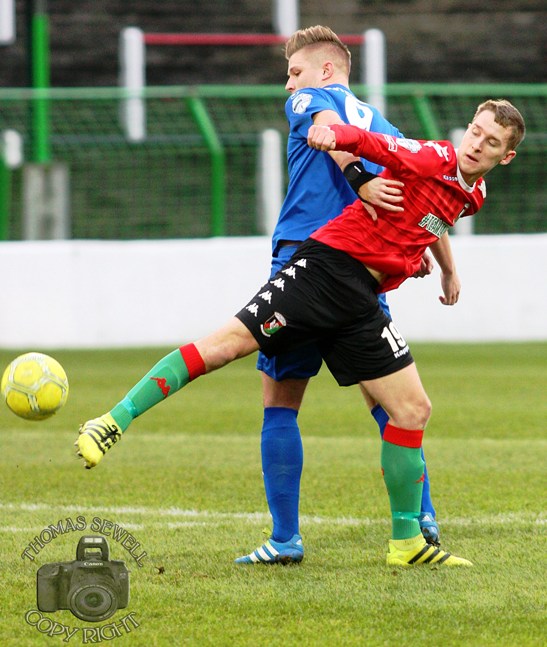 The game started in very blustery conditions, Glentoran playing the first half with the wind at their backs. Indeed it seemed to take both teams some time to adjust to the conditions as neither side carved out an opening in the first ten minutes. Dungannon bossed possession early on and were first to threaten, much coveted frontman Andy Mitchell showed good strength to hold off Magee and then find Jamie Glackin cutting in from the right. Glackin’s driven effort saw Morris parry the shot and then react first to dive safely on the loose ball with Mitchell racing in.  Glentoran then showed some attacking intent as first Allen flashed a volley wide and then Jonny Addis almost flicked a low Lavery corner beyond Coleman in the Swifts goal.

As the game settled down neither side looked to be dominating but Glentoran struck twice in four minutes to take control. Firstly Ciaran Caldwell played Curtis Allen behind the defence, Allen tried to lob Andy Coleman who got a hand to it but the prone keeper could only watch as a combination of the pace on the lob and the strong wind ensured the ball would fall out of the reach of a lunging defender and over the line. Four minutes later the glens doubled their lead, neat work from Allen and Lavery won a corner from which Caldwell picked out James Ferrin. The defender powered home his first Glentoran goal, a header from a few yards giving Coleman no chance.

The visitors will probably have felt aggrieved to be two down in an even game and immediately set about replying, firstly a clever passage of play between Burke, Mitchell and McElroy resulted in Glackin blazing over from 20 yards then Glackin again threatened, flashing a ball across goal to McElroy but McAuley did well to snuff out the chance. 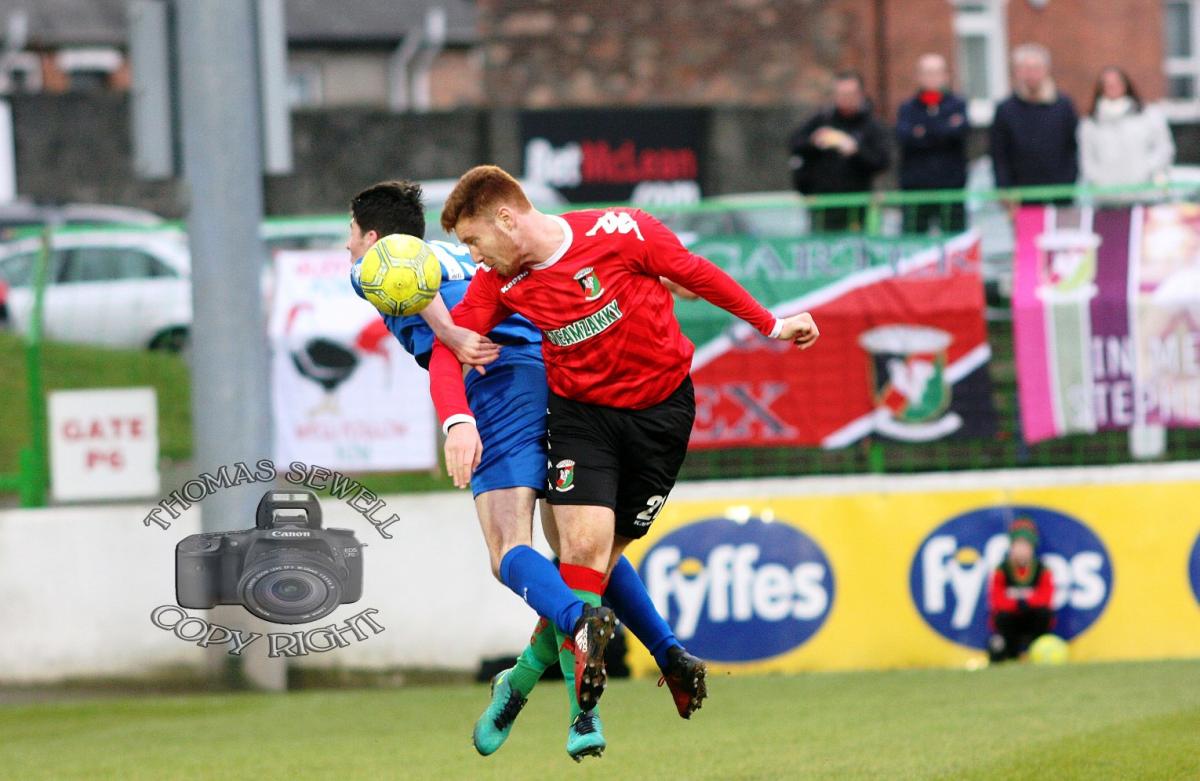 Within a minute of the restart it was almost three nil. A clever flick from Curtis Allen played Ciaran Caldwell in but with the Dungannon defence beaten, Caldwell stumbled as he tried to outfox Coleman and the chance was gone. With that the game turned, after 50 minutes Cormac Burke drove at the Glentoran defence, found Glackin and his low cross left the simplest finish for Andy Mitchell who had ghosted in between Addis and Magee. Minutes later Mitchell went close again, Morris denying him with a comfortable save. Then as the visited surged, Dougie Wilson should have equalised when Mitchell knocked a corner down for Wilson who volleyed over. Curtis Allen went closest for Glentoran with an acrobatic overhead kick but in truth it felt like an equaliser was coming. It arrived with 20 minutes remaining, Jarlath O’Rourke crossed for Burke, he scuffed an effort towards goal and it was that man Mitchell who reacted quickest, poking the ball under Morris to level the game at 2-2. 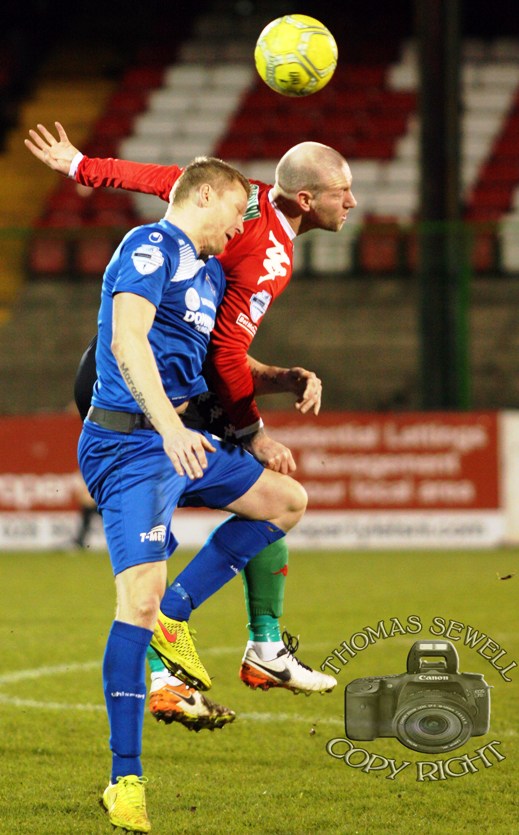 At this point in proceedings there can’t have been many inside The Oval who didn’t cast their minds back to the start of the month when Ballymena came from 2-0 down to win but despite late free kicks from Mitchell and Ryan Harpur the Swifts couldn’t find a third. Substitute Stephen O’Flynn added a different threat late on for Glentoran but he was never really provided with any threating service, a late, dangerous cross from Addis nearly provided the former Crusaders frontman with a chance but he was just denied by an excellent defensive header. 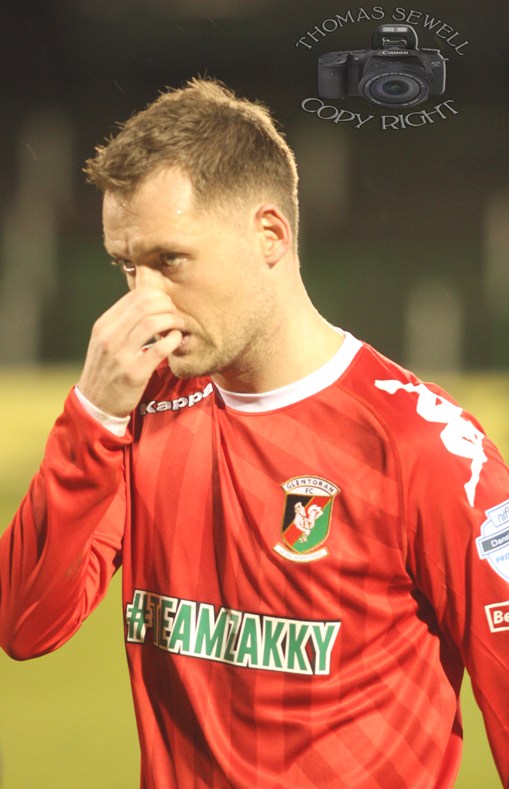 A frustrating day for Glentoran with Swifts well worth a point, improvement will be needed on Tuesday night as we travel to Shamrock Park to face basement club Portadown. Kick Off is at 7.45.