Glentoran and Crusaders were involved in a feisty encounter at the Oval this afternoon in a game which saw 4 goals, 3 red cards and 9 yellows cards....unless we missed one. 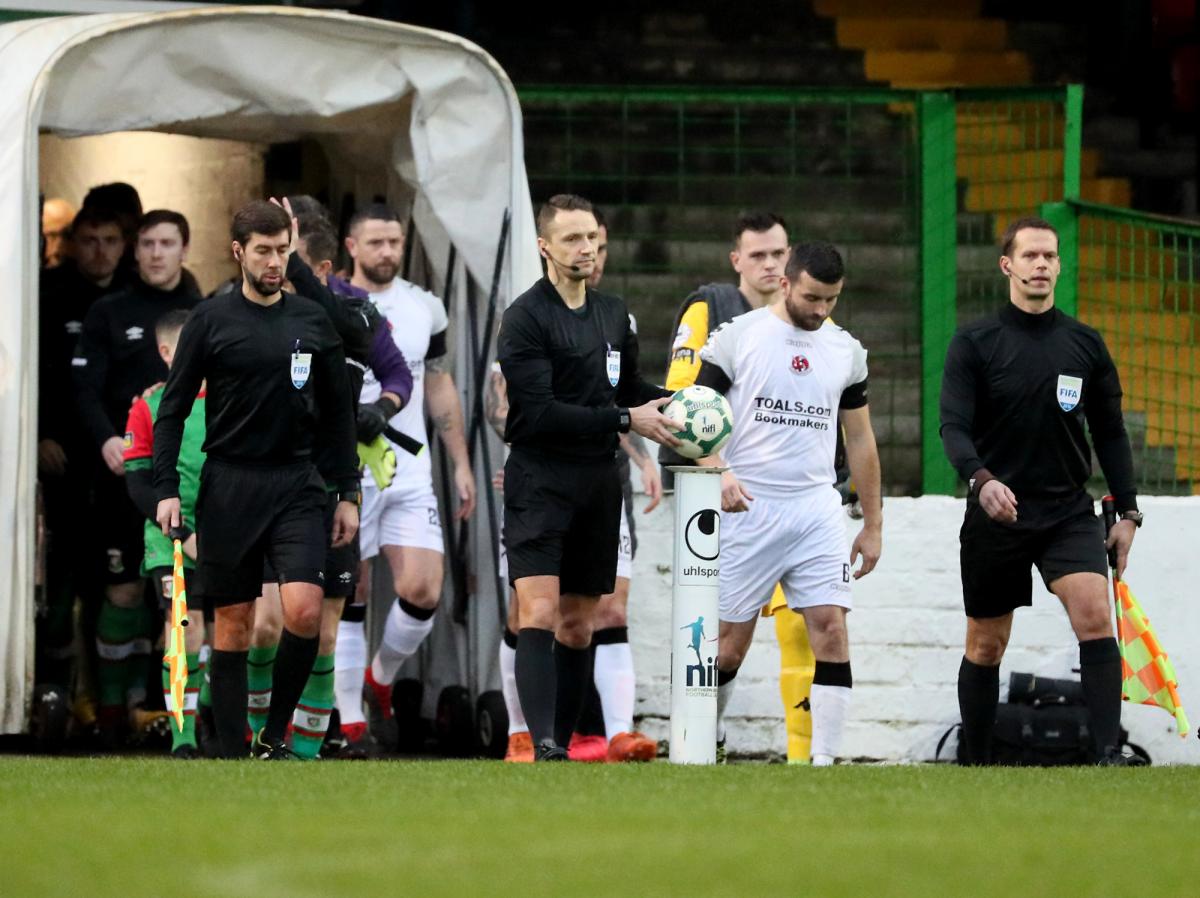 For Latvian referee, Mr Andris Treimanis (who is on this season's Champions League list) it was a baptism of fire and an experience he probably won't want to dewll on for too long.

Glentoran made wholesale changes to their starting line up. Missing were Connor Pepper (suspended), Nathan Kerr (ill) and Curtis Allen (attending a wedding). Back came John McGuigan, Dylan Davidson and Steven Gordon with James Ferrin also starting in place of Calum Birney who was named amongst the substitutes. 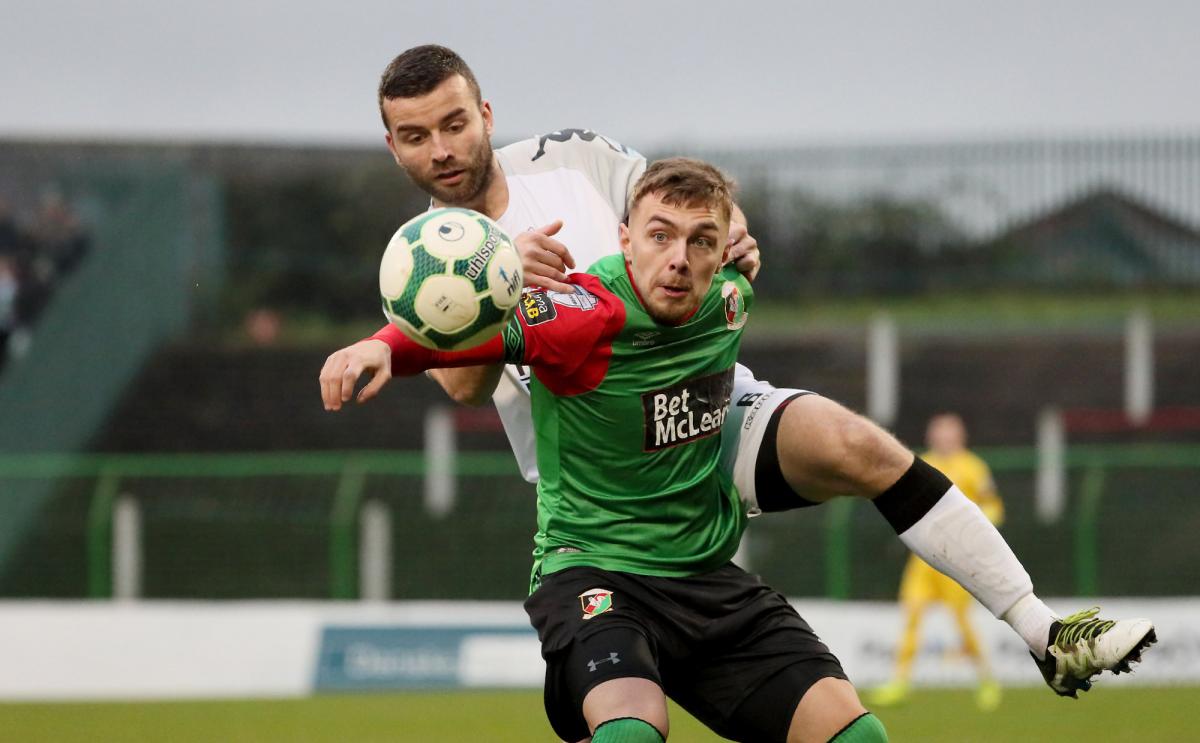 The first chance of the game fell to Crusaders after 4 minutes but Paul Heatley's tame shot was easily dealt with by Elliott Morris. Glentoran then had a couple of chances from corner kicks; James Ferrin's effort just clearing the crossbar (6) and Willie Garrett's header being smothered on the goal line by Harry Doherty. After a quarter of an hour though the visitors edged in front. A long ball hoofed forward wasn't dealt with properly by Ferrin. His header fell to Rory Patterson who played in Heatley. After evading an attempted challenge from Willie Garrett, Heatley slipped the ball past Elliott Morris. On 19 minutes Crusaders had another opportunity from a free kick; the talented Heatley showing the darker side of his play with a typically theatrical fall to win the set piece. Colin Coates took responsibility but hit the ball at the defensive wall. 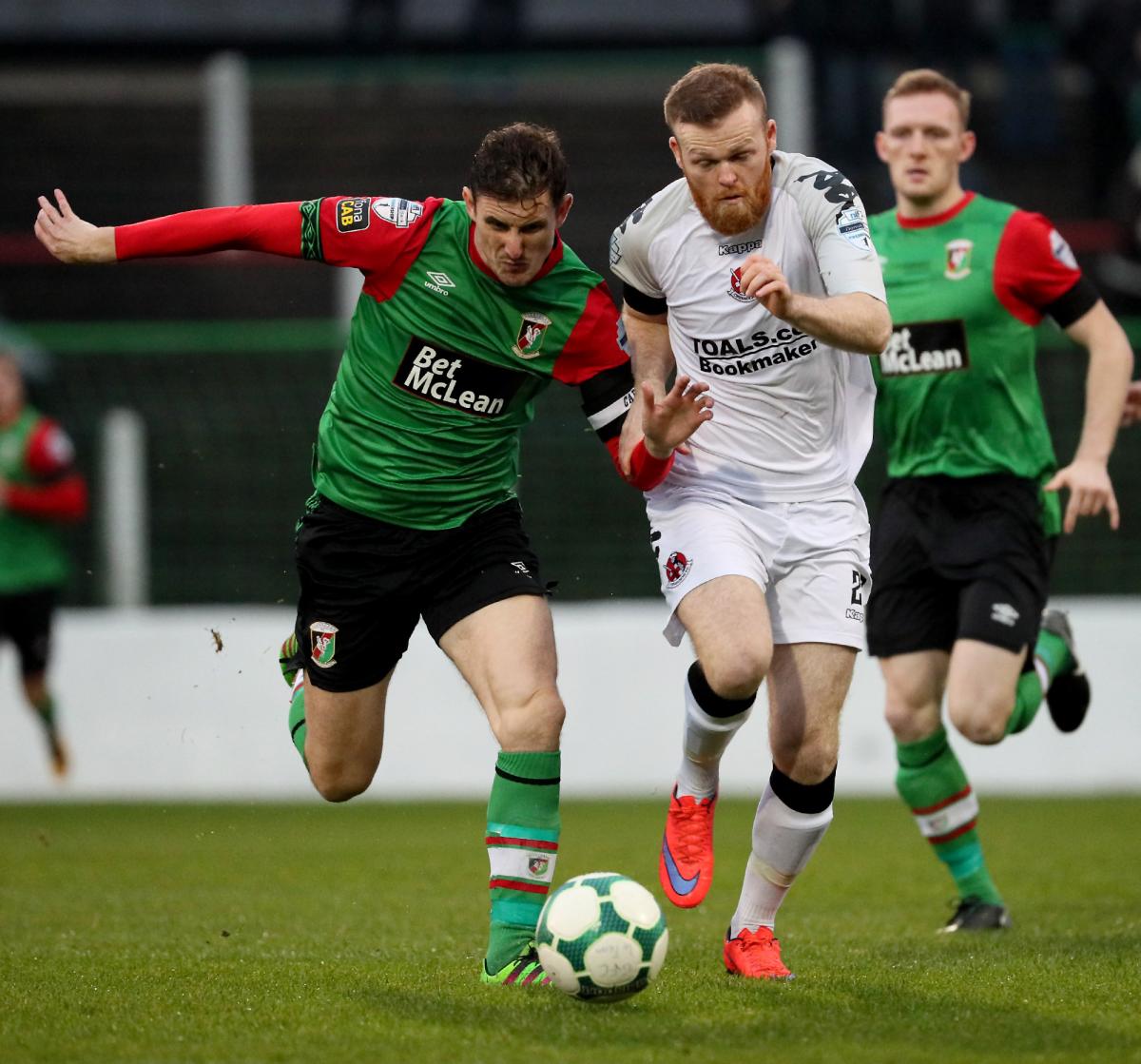 Midway through the half the Glens had a great chance to equalise. A good move down the left, started by Joe Crowe and involving John McGuigan and Ross Redman ended when the Crues conceded a corner. Redman's delivery found skipper, Marcus Kane but his downward header bounced up and over the bar.On the half hour Kyle Owens struck the outside of the post with a header. Then on 31 minutes the Glens drew level. Coates fouled McDaid and Willie Garrett took the free kick. His ball into the danger area was met by John Herron who headed past Doherty and into the far corner. 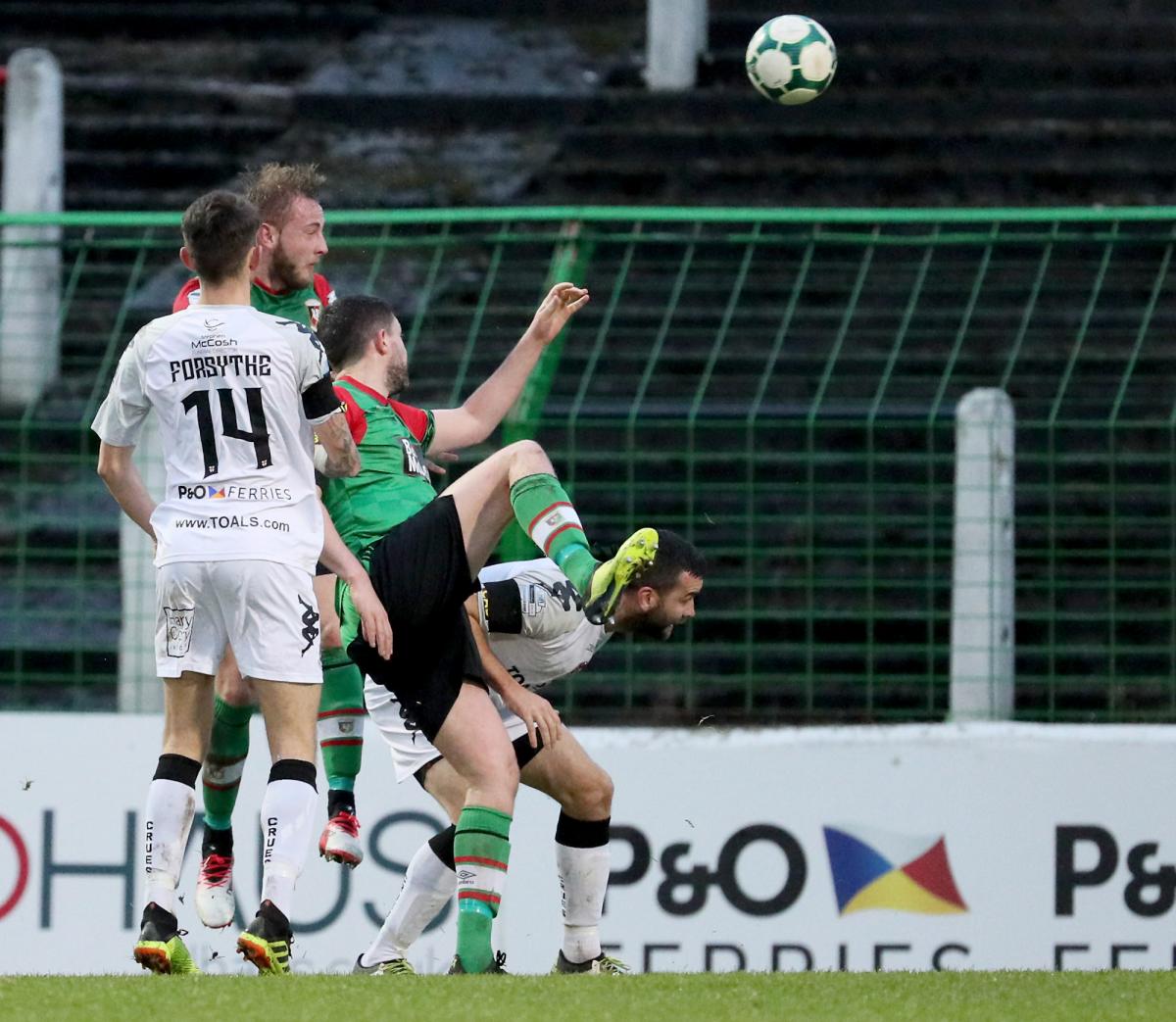 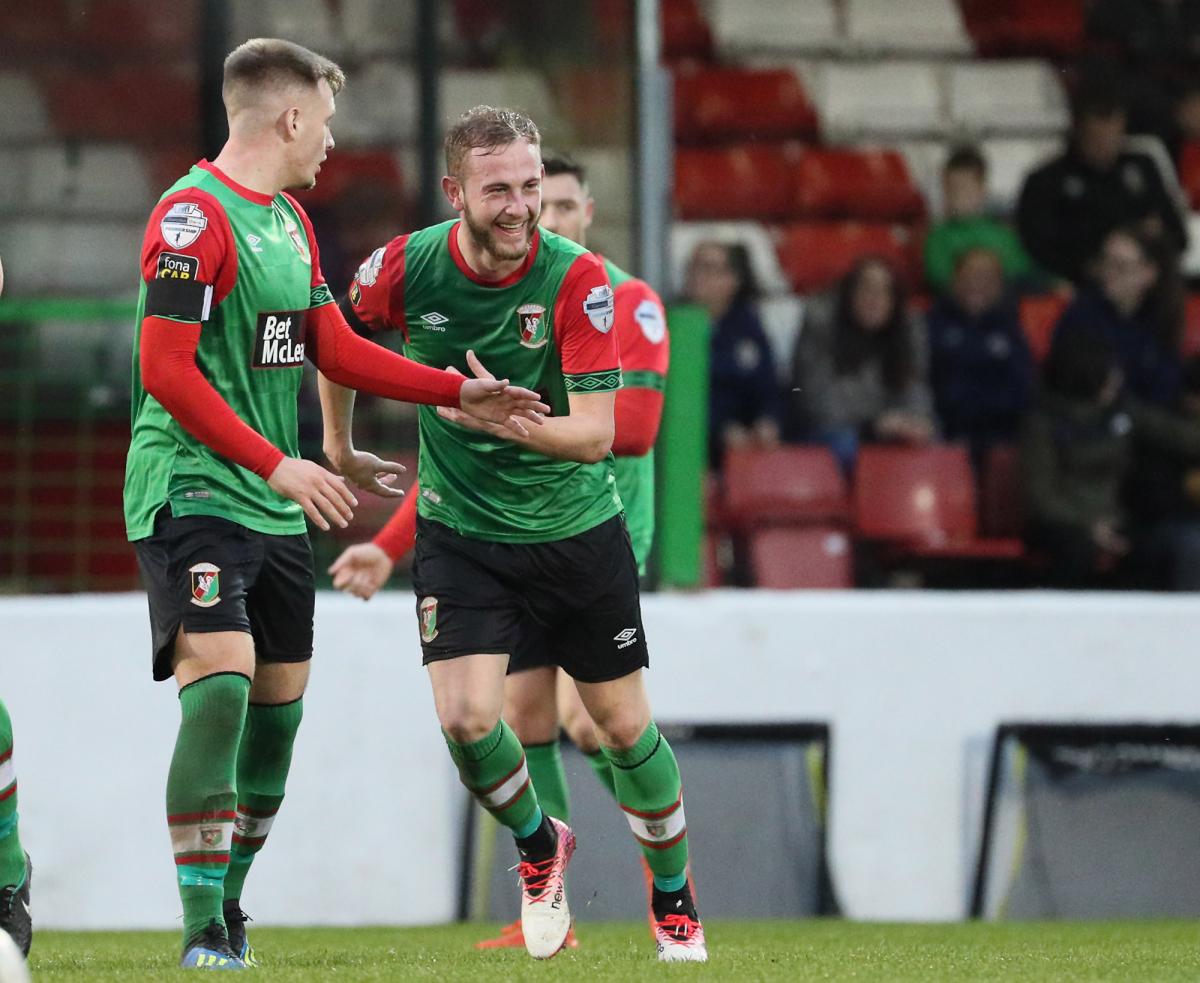 Two minutes later Dylan Davidson's 20 yard right footed drive flew just wide but a minute later the visitors regained the lead. Caddell found Heatley on the right and his low cross was excellently finished by Rory Patterson. On 38 minutes it could have been virtually game over as Willie Garrett's slip allowed Carvill to drive a low ball right across goal; Heatly just failing to get a touch at the back post. On 42 minutes Crusaders were reduced to 10 men, Kyle Owens, booked earlier for a foul on McDaid then took out McDaid in an aerial challenge. Mr Treimanis produced a yellow card and initially he seemed to be unaware that it was a second for Owens but he quickly sorted things out and Owens was heading for the tunnel. Willie Garrett took the free kick and it was cleared for a corner. Ross Redman swung the ball into the area and James Ferrin's diving header fell kindly to Robbie McDaid who smashed the ball home from 6 yards out. 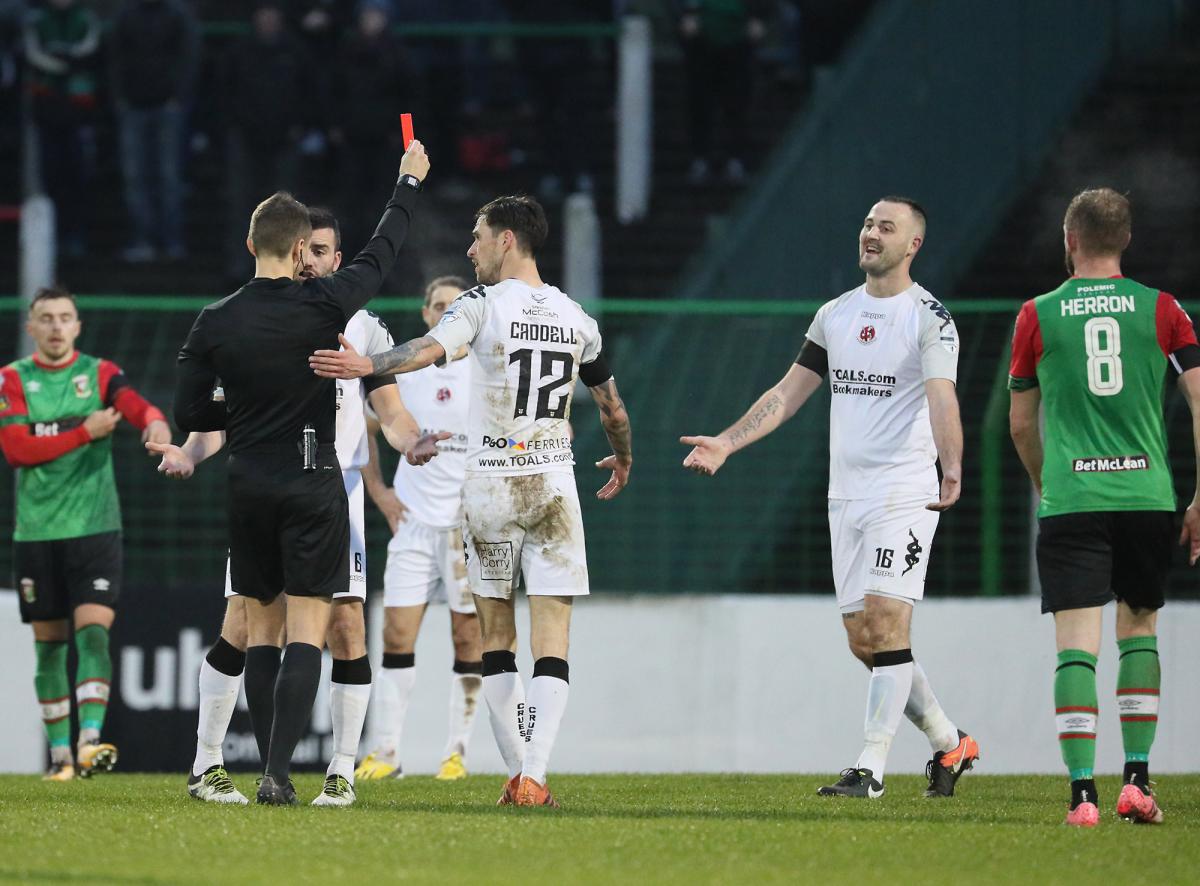 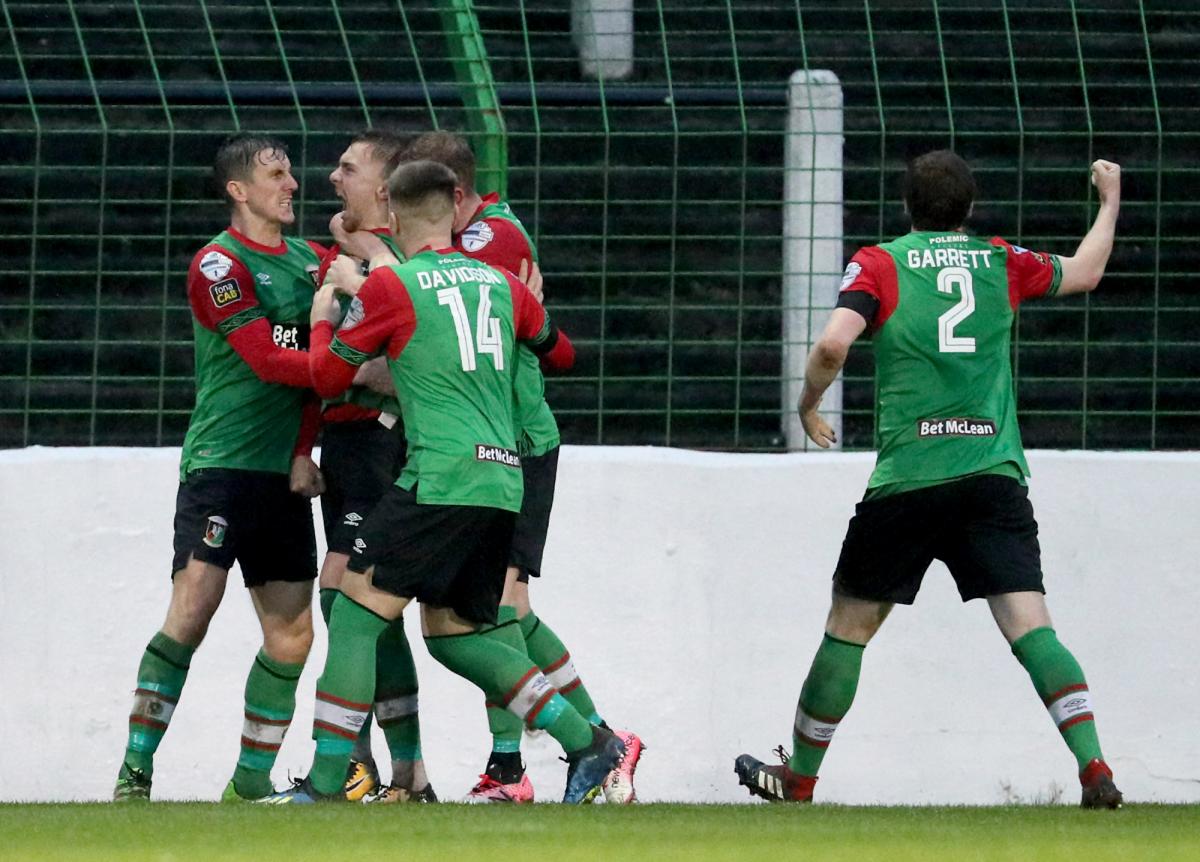 In the first of 2 added minutes at the end of the first half we almost had a collector's item from Steven Gordon but his shot from outside the area flew just wide! A tackle by Marcus Kane on Paul Heatley then sparked a mellee in which virtually every player on the pitch, the coaching staff and substitutes got involved. A number of players, including Kane received yellow cards with Rory Patterson and John McGuigan both shown straight reds. Glentoran manager Ronnie McFall, who has seen McGuigan miss 6 games for a needless sending off against Ards, must have been really frustrated to see the Glentoran number 10 run right across the pitch to push someone over. A senseless act and one which will result in a further ban. With everything then sorted out Mr Treimanis finally got to blow the halftime whistle with 51 minutes on the clock. 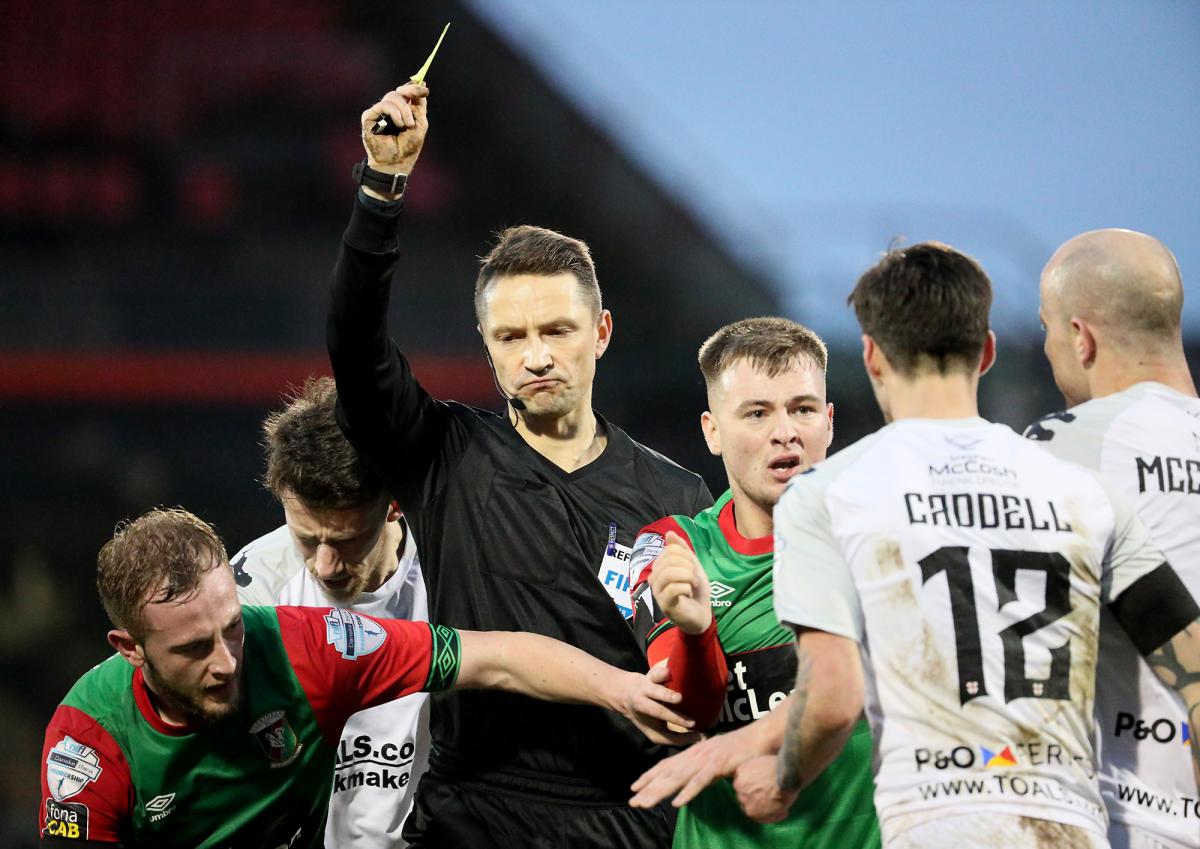 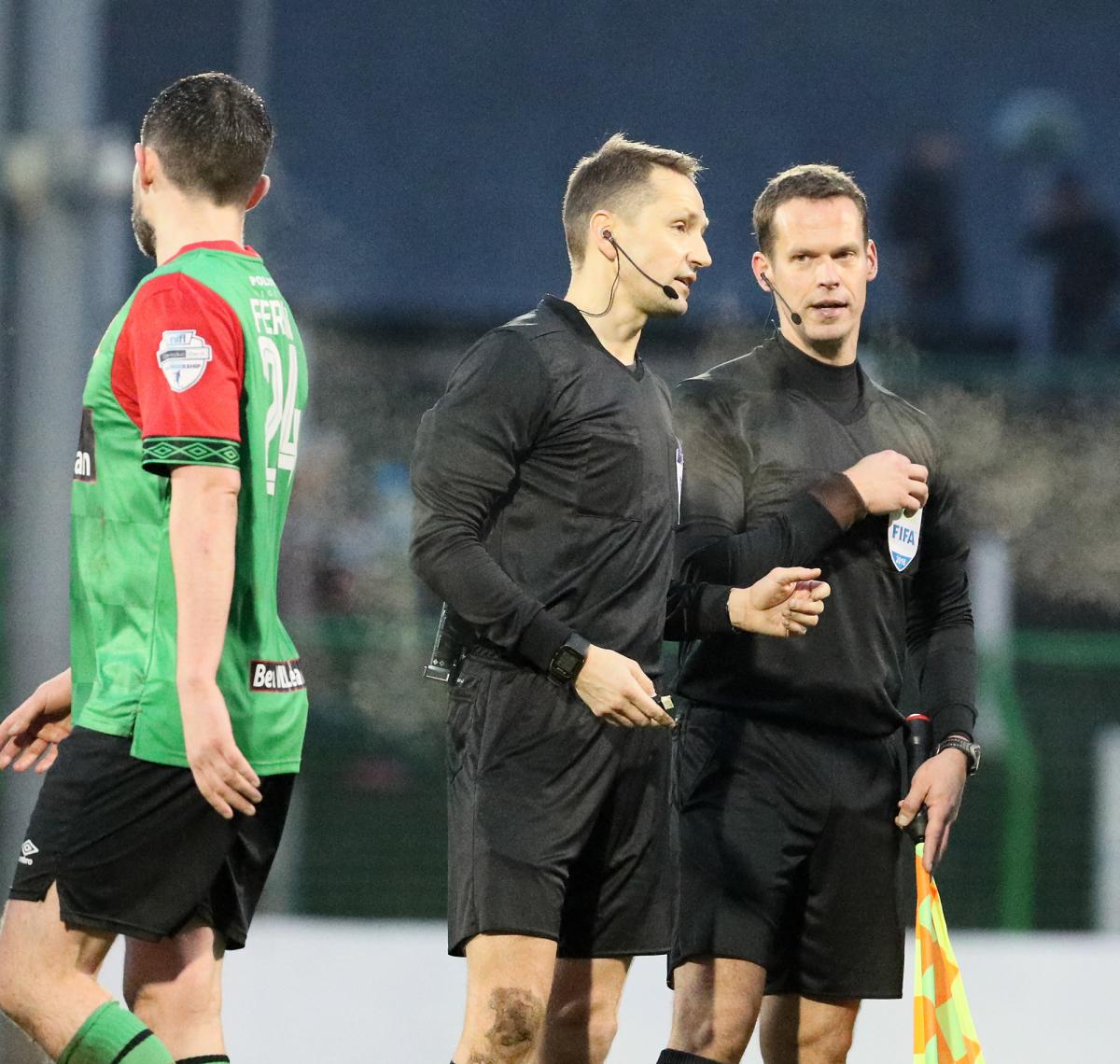 In comparison to the first half, the second was decidedly dull! The aggressive tackling continued with Ross Clarke picking up a yellow for a lunge at Marcus Kane but both side seemed to struggle to adapt to playing without their full complement. On 56 minutes Heatley went down in the area claiming a penalty. There was minimal, if any, contact from Joe Crowe but the officials decided that Crowe had played the ball and awarded a corner. Free kicks followed at either end with Ross Clarke off target (59) and Willie Garrett following suit at the Sydenham End (65). Heatley then had chances following errors by Garrett and Ferrin. Elliott Morris made a fine stop to deny him the first time and then Garrett made amends by blocking the second. 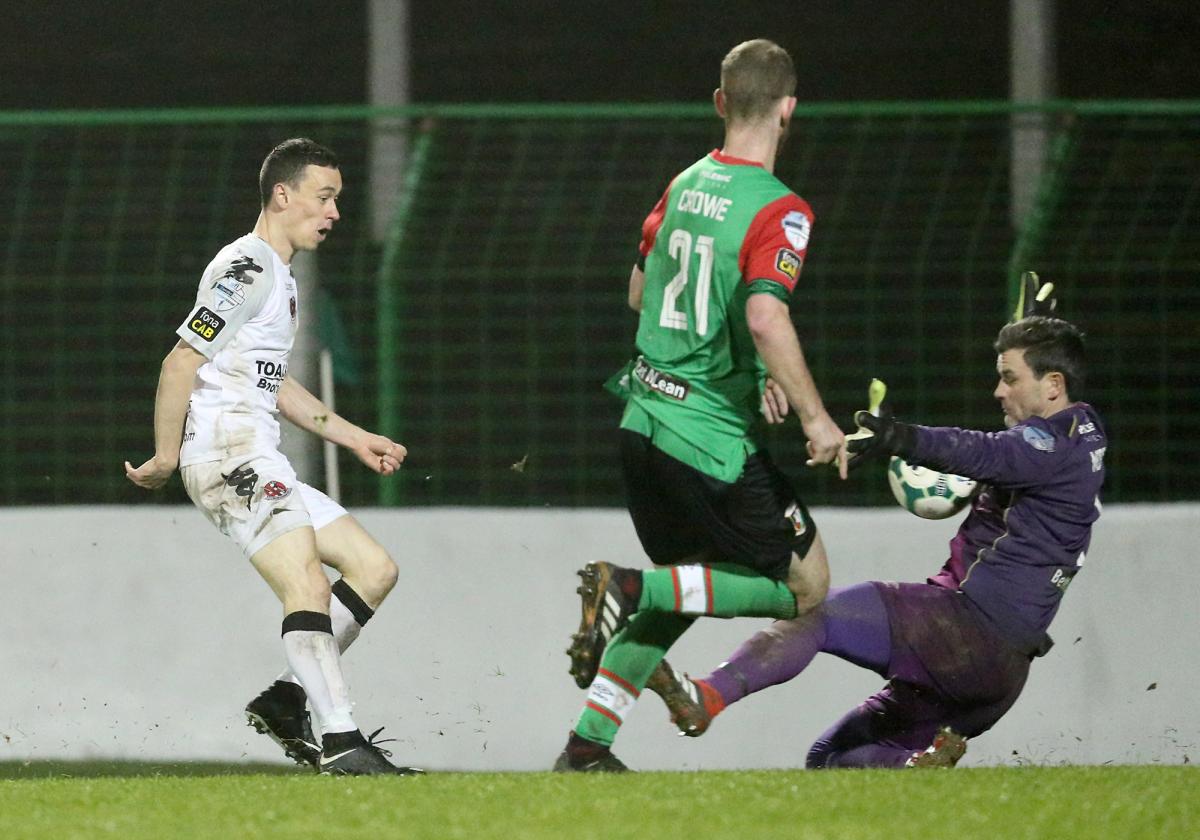 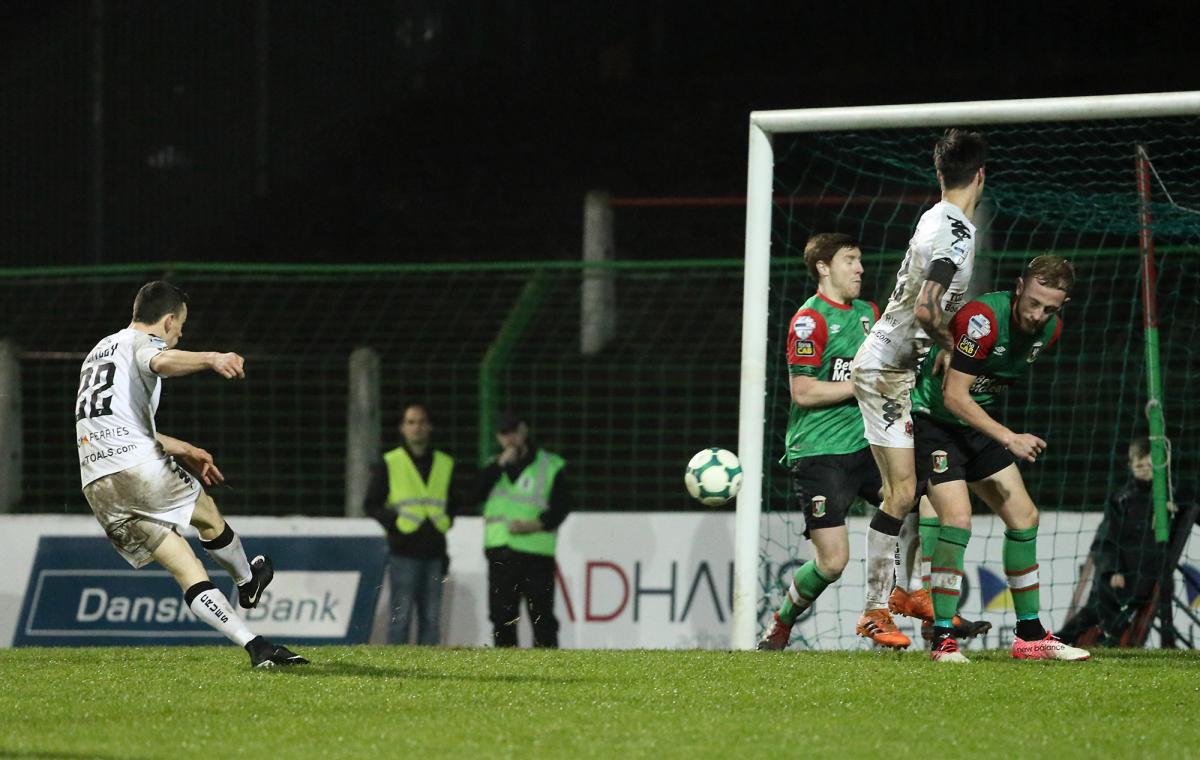 Both sides then made changes to try and grab the 3 points. Closest was Paul O'Neill who almost won it for the Glens on 85 minutes. Having been played in by Stevie Gordon, O'Neill controlled the ball well before firing the ball towards the far top corner. Unfortunately for the young Glentoran striker, Harry Doherty got a fingertip to the ball and touched it over the crossbar. 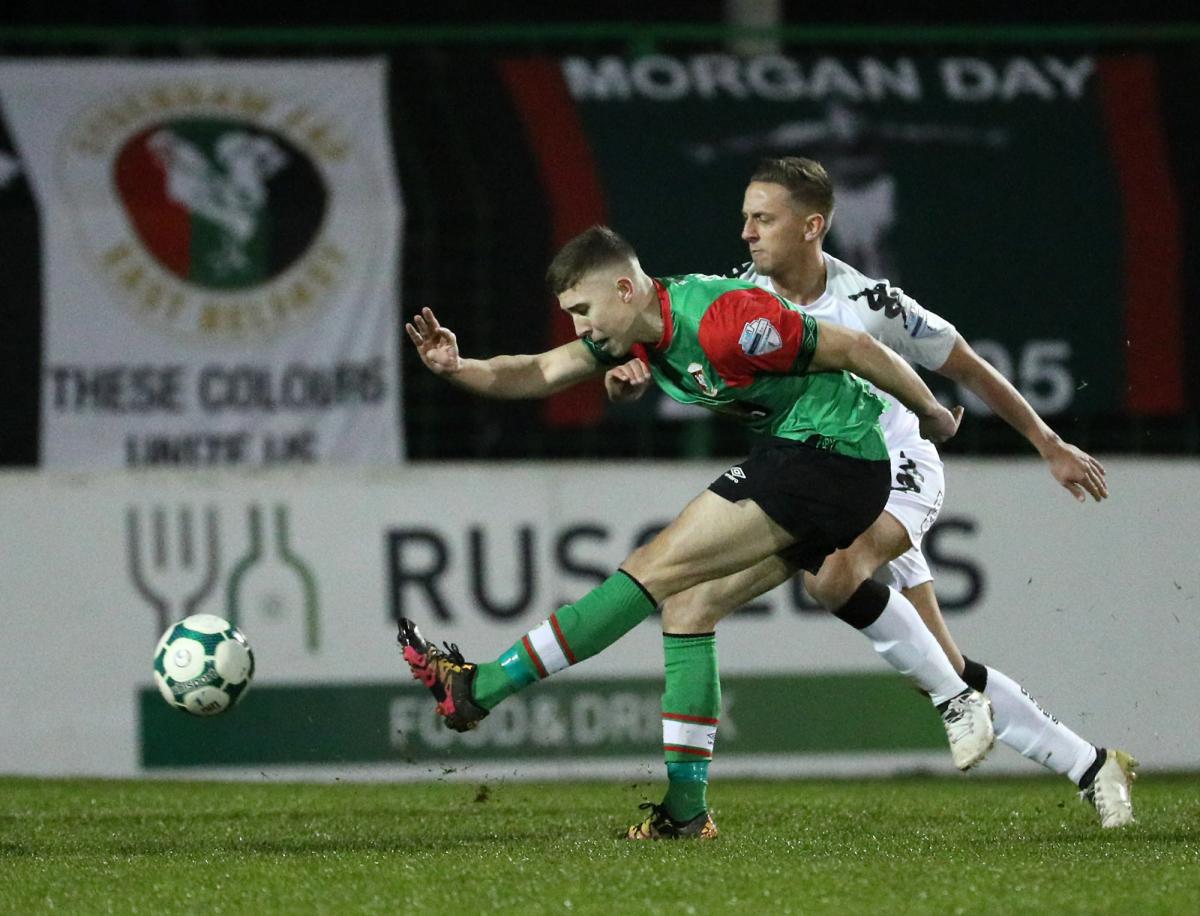 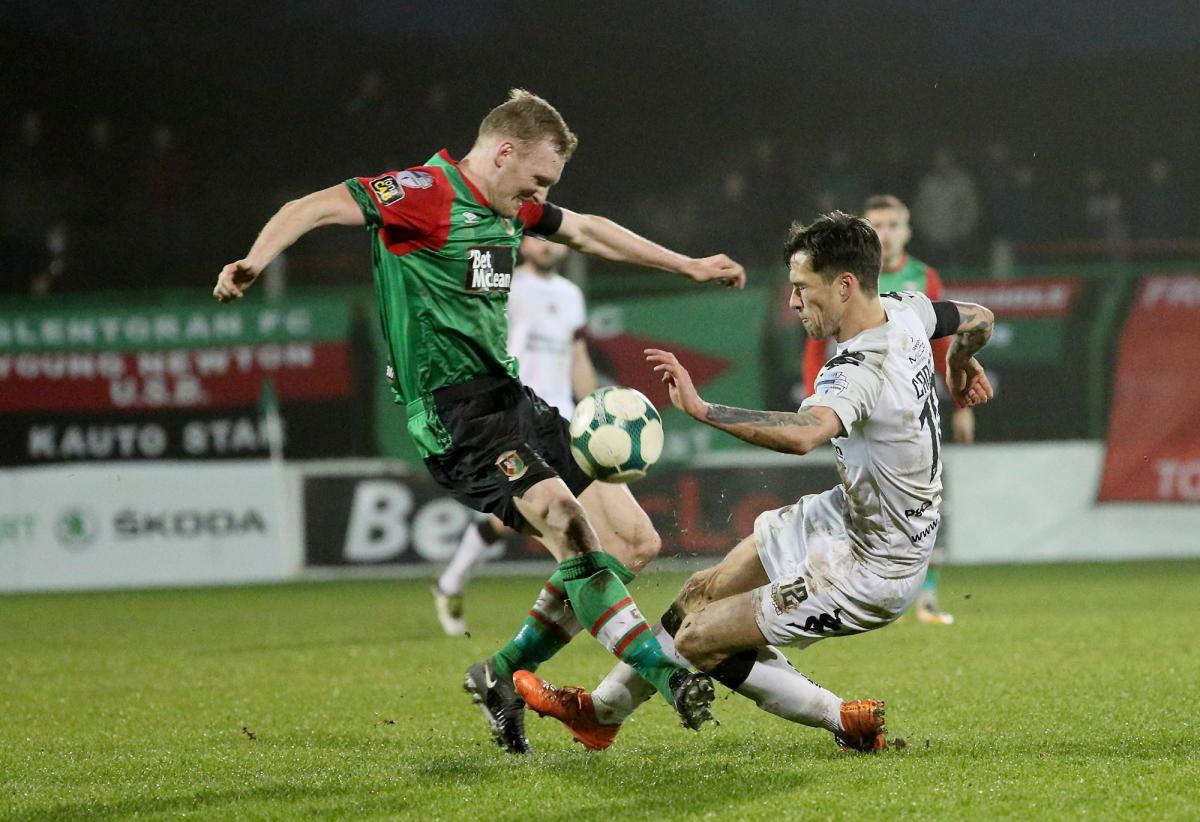 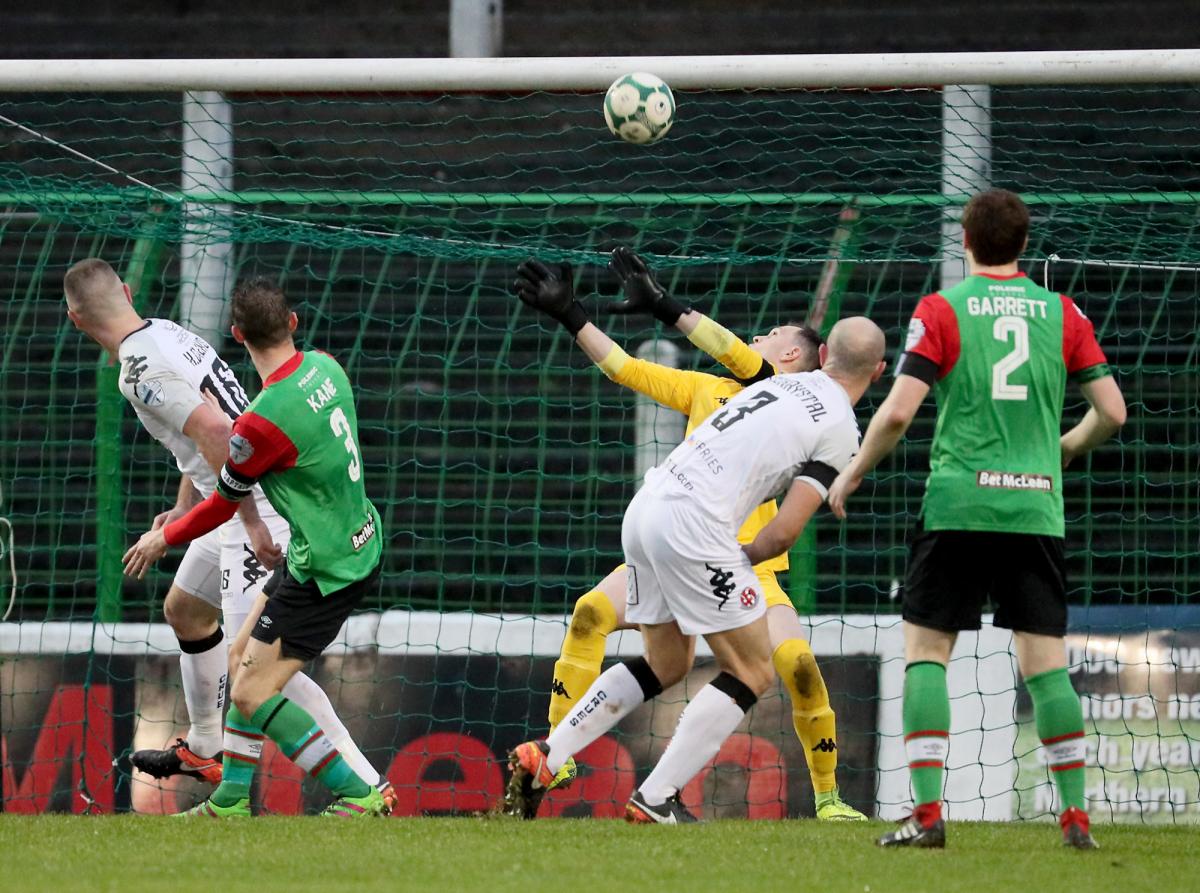