The Glens and the Bannsiders played out an entertaining 2-all draw at the Oval this evening in the Danske Bank Premiership. 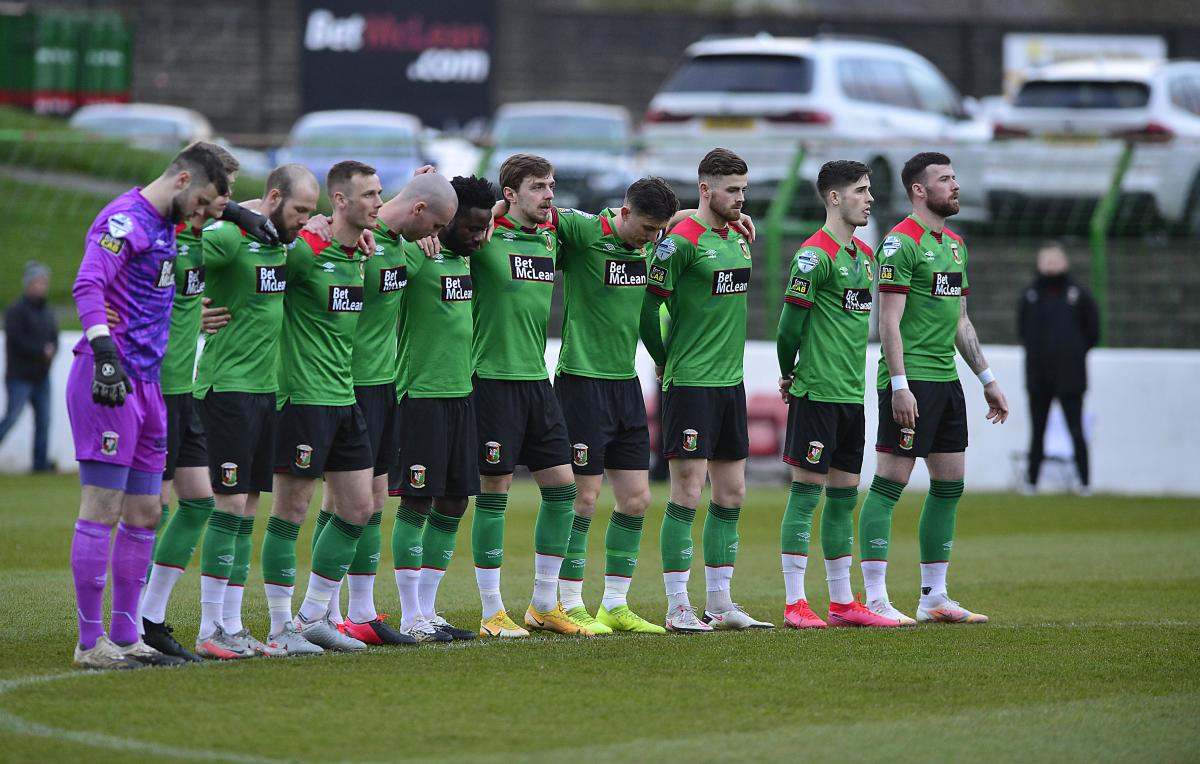 Prior to kick off, both teams, management and club officials present in the stadium, observed a two-minute silence as a mark of respect to His Royal Highness Prince Philip who sadly passed away last Friday.

We had our second spectacular long-range goal at the Oval in consecutive games; this time it was an own goal from Josh Carson which levelled the game at 2-2 and that was how the game finished.

A point was the least the Glens deserved having dominated the majority of the first half. Leading 1-nil, the Glens should have been out of sight after half an hour but a goalkeeping error gave the Bannsiders an equaliser from a rare attack. 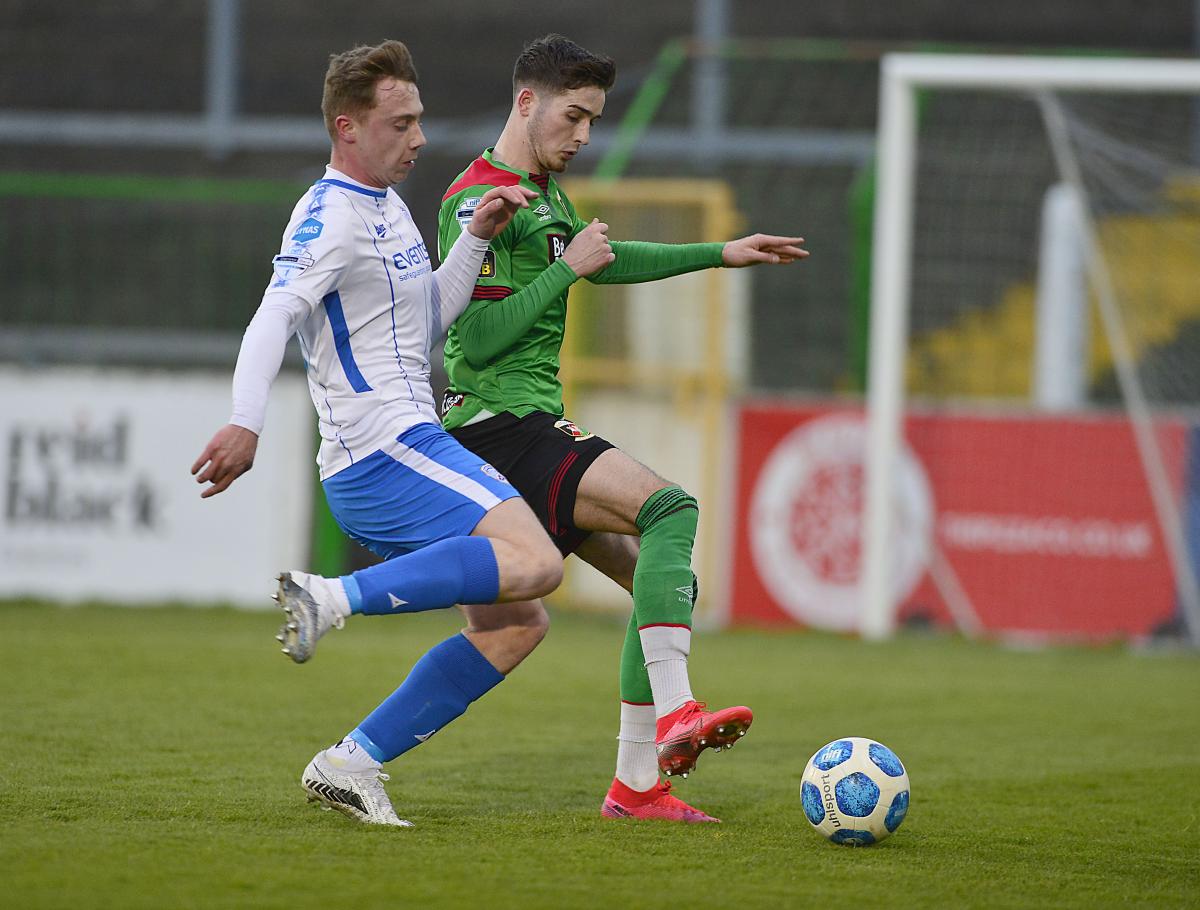 Glentoran, fielding the same starting XI that defeated Dungannon Swifts on Saturday, were quickly out of the blocks and won two corners in the opening couple of minutes. The second of these was cleared only as far as Gael Bigirimana who delivered a great ball to the back post where Paddy McClean just failed to get a touch on it. Marcus Kane had the next effort on goal but his header from a Hrvoje Plum free kick sailed wide of the goal. 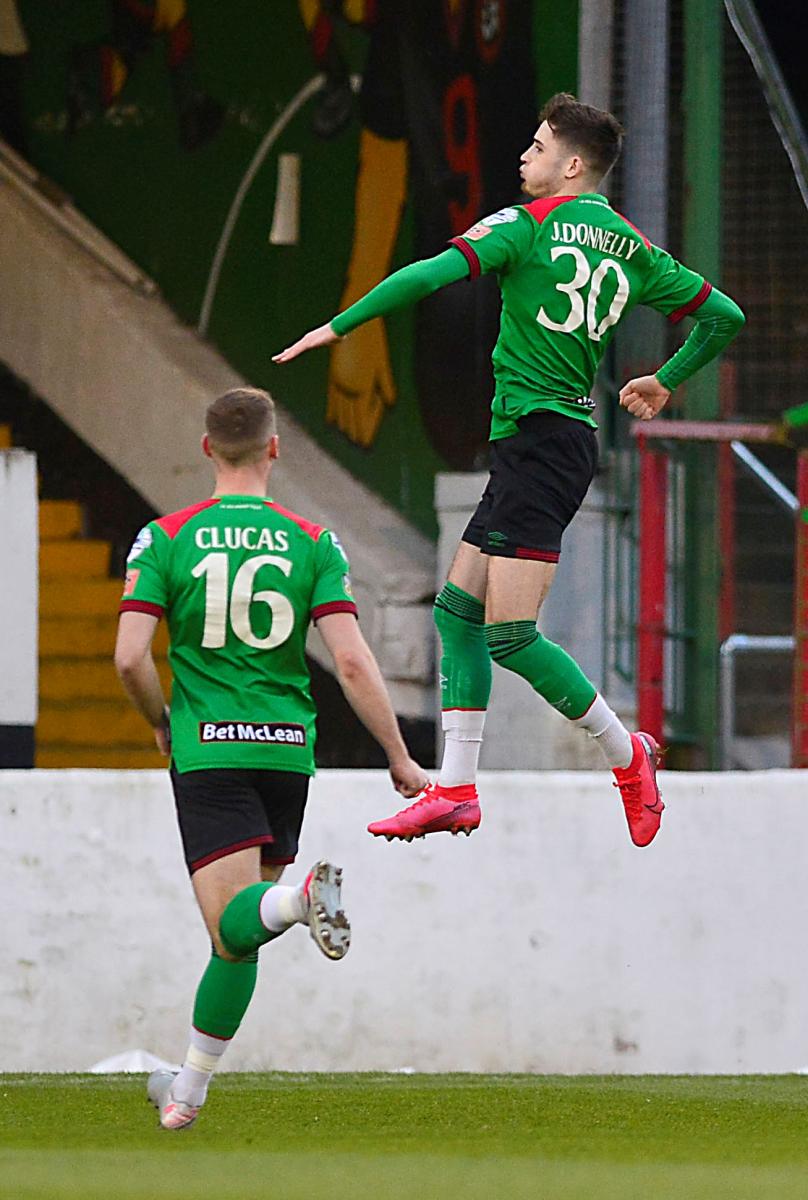 The opener came on 5 minutes. Luke McCullough’s free kick was flicked on by Robbie McDaid. Jay Donnelly controlled it before firing a superb shot past Coleraine keeper, Martin Gallagher. It was the striker’s 16th goal of the campaign in 30 games. A superb return.

A poor clearance from Rory Brown almost gifted Coleraine an equaliser just 2 minutes later but the Glentoran keeper redeemed himself, saving Jamie Glackin’s shot. The Glens continued to dominate and Marcus Kane, having driven powerfully into the penalty area, was unlucky to see his shot deflect wide of the goal for a corner. On 19 minutes a sublime pass from Rory Donnelly released Rhys Marshall. Marshall opted to shoot when he had options in the centre but his effort was scrambled behind by Martin Gallagher. 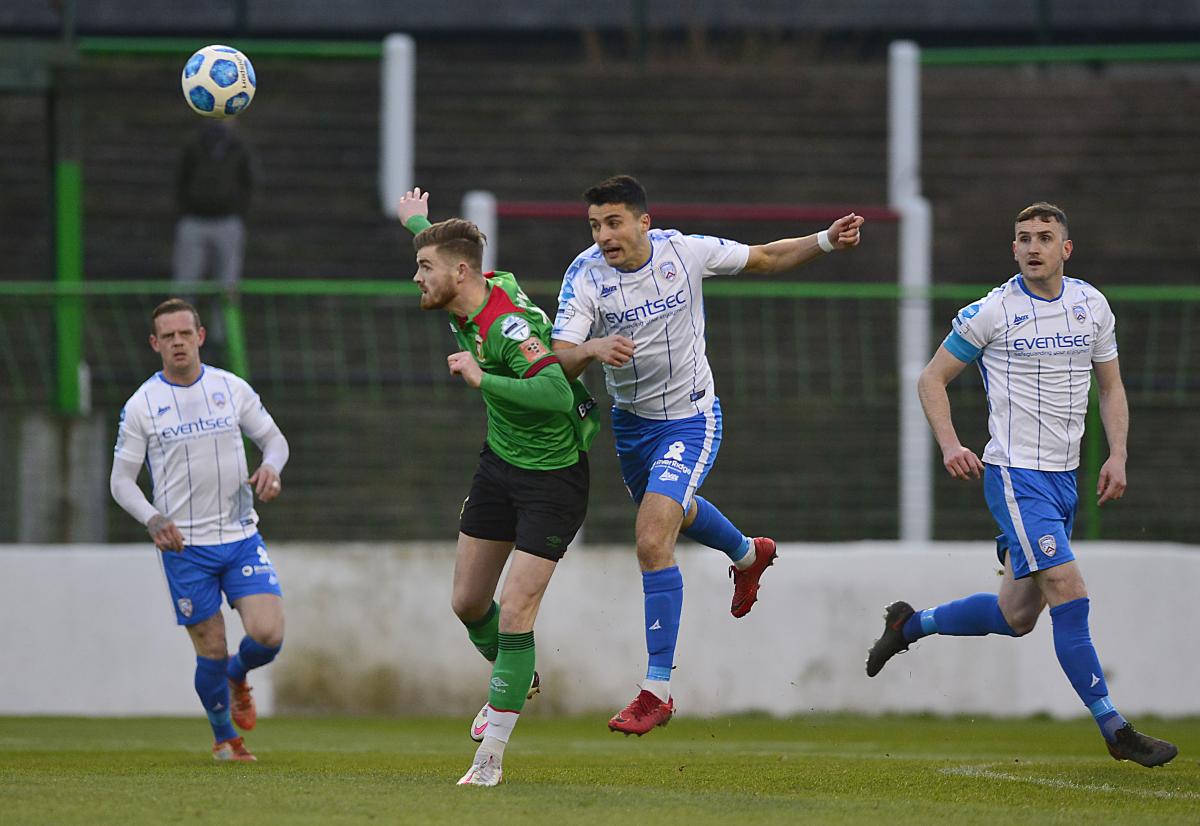 Glentoran really should have doubled their lead from the resulting corner. Hrvoje Plum played it to the near post where Luke McCullough fired goalward only to see his shot come off the crossbar and go behind. Midway through the half the Glens should have had a penalty. The ball was played to Plum in the area and as he cut inside the defender had his legs taken from under him. Referee Crangle though waved play on. On 23 minutes a free kick from Hrvoje Plum was narrowly wide of the post and then a link up between the Donnelly brothers saw Rory strike a 25-yard shot just wide. 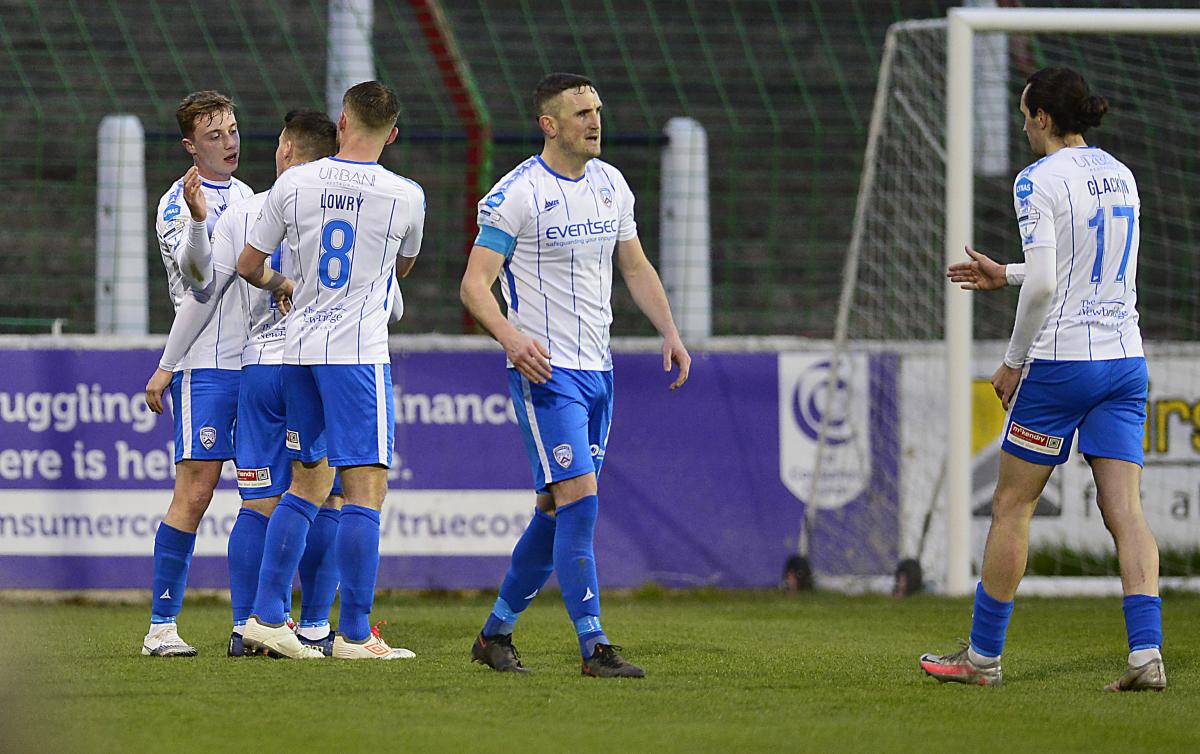 Then, completely against the run of play, Coleraine drew level. Hrvoje Plum conceded a cheap free kick midway inside his own half. Jamie Glackin fired the ball into the penalty area and Rory Brown came to claim the ball but missed it totally and Matthew Shelvin headed home to make it 1-1.

Glentoran went back on the offensive and both Robbie McDaid and Seanan Clucas had shots blocked by the Coleraine defence. 9 minutes from the break Hrvoje Plum almost put the Glens in front again with an in-swinging corner which had beaten Gallagher only for Stephen O’Donnell to clear off the line. The final action of the half brought another chance for Matthew Shelvin but his shot was brilliantly blocked by Paddy McClean. 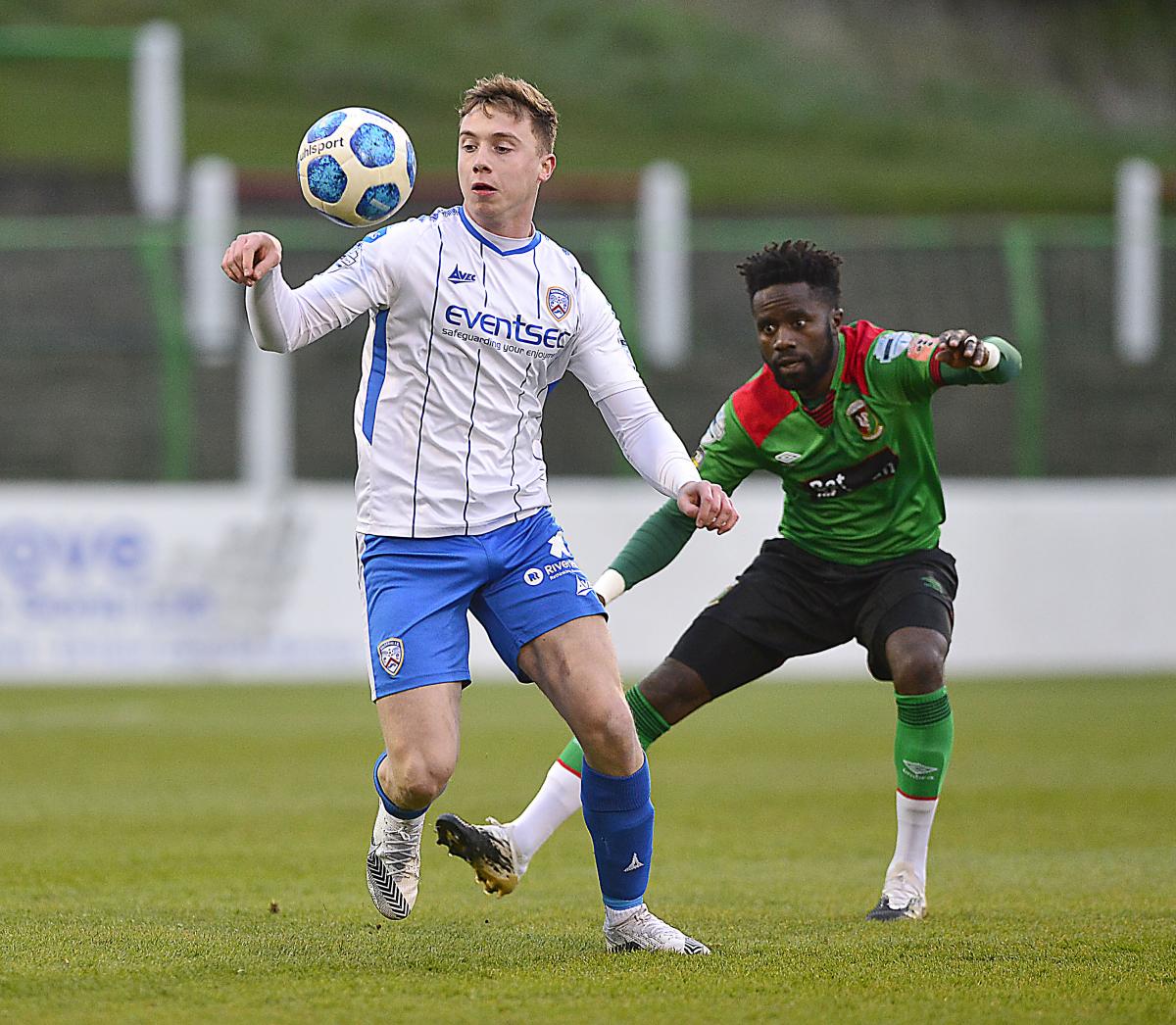 Coleraine showed more attacking intent at the start of the second half and Jamie Glackin, looking suspiciously offside, fired over from the edge of the area on 47 minutes. A minute later Jay Donnelly put Robbie McDaid through in the box. McDaid went down under a challenge from O’Donnell but again referee Crangle ignored Glentoran’s claims for a penalty! On 55 minutes Rory Donnelly did really well on the left, bursting forward before cutting a low ball into the danger area only to see it turned behind for yet another corner. Glentoran’s next effort followed an excellent link up between Rhys Marshall and Jay Donnelly with the latter’s deft flick setting up Seanan Clucas but he shot wide of the post. 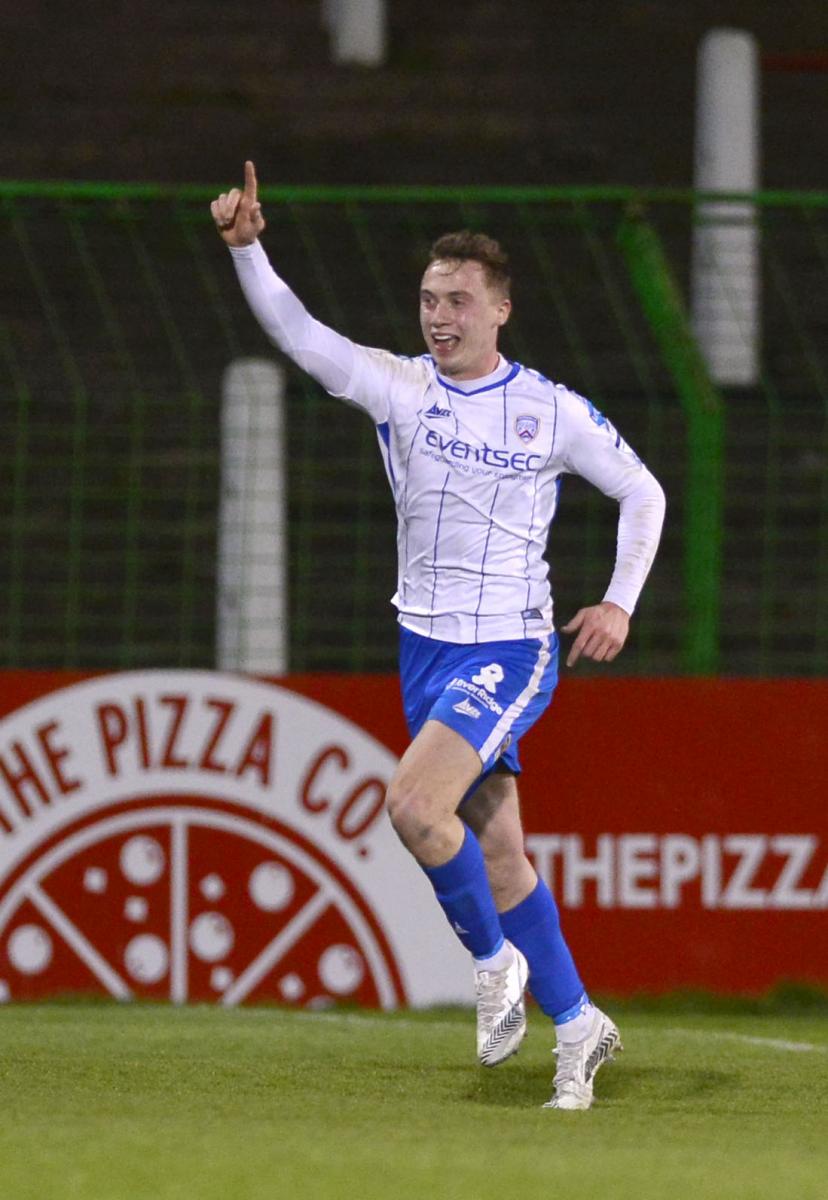 On 69 minutes the visitors went in front. The Glentoran defence seemed to hesitate when Glackin went down following a challenge from Plum. Coleraine played on though and the ball found Shelvin on the edge of the area, again possibly in an offside position. He moved forward though and beat Rory Brown with a low shot into the City End goal. It was a real blow for the home side having dominated much of the game and created so many chances to now find themselves behind! 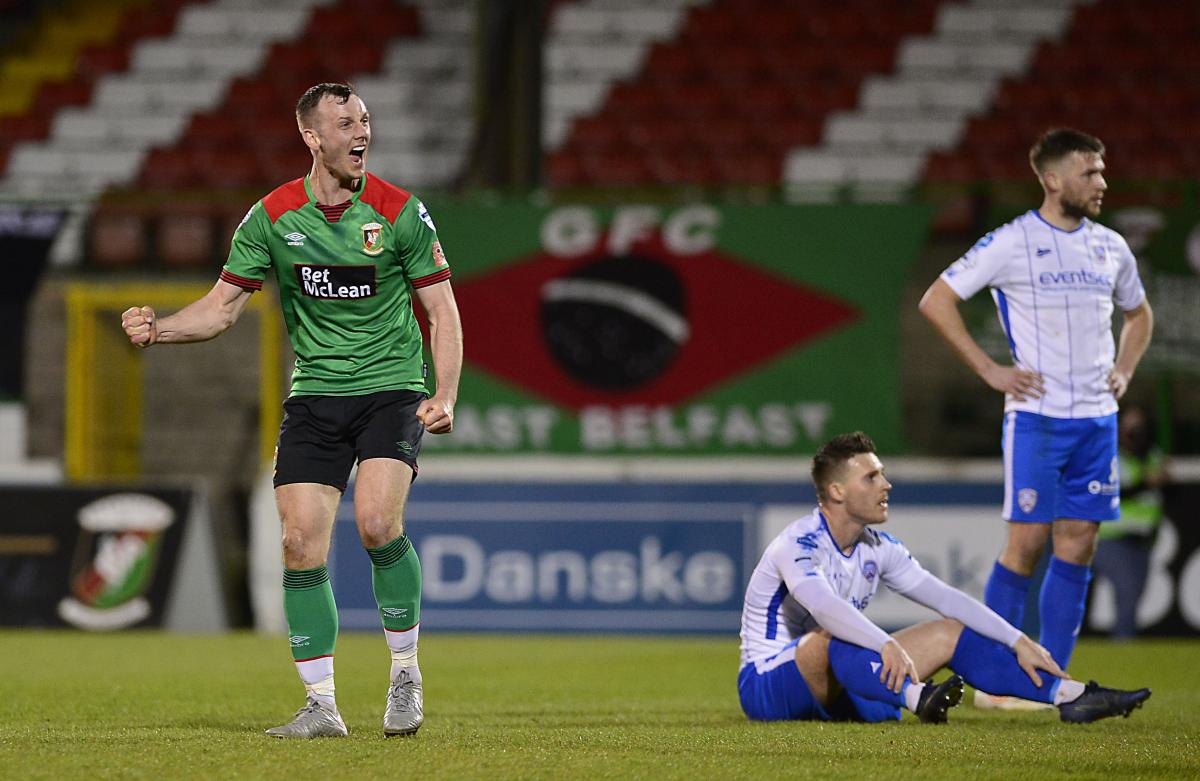 17 minutes from time another free kick from Hrvoje Plum was played into the box. Paddy McClean got on the end of it but his header lacked power and it was a comfortable save for Matrin Gallagher. On 77 minutes Glentoran were back on terms thanks to a bizarre own goal from Josh Carson. It was though the result of the home side continuing to fight and press to win every ball. Coleraine cleared the ball from the edge of their own box but Paddy McClean forced an error and won possession only to quickly lose it again to Stephen Lowry. McClean regained it though and found Clucas. His ball forward found Jay Donnelly who attempted to lay it off to Hrvoje Plum. Josh Carson went in to challenge the Croatian midfielder but somehow managed to fire the ball towards his own goal from around 35 yards. Martin Gallagher was on his 6-yard line and tried in vain to keep it out but to no avail. 2-all. Both sides went for the win in the closing 10 minutes with Glentoran looking the more likely to come out on top but it wasn’t to be.