Goals from two defenders gave the Glens all 3 points in today's Danske Bank Premiership game at the Oval and moved the club up to third place in the early season table. 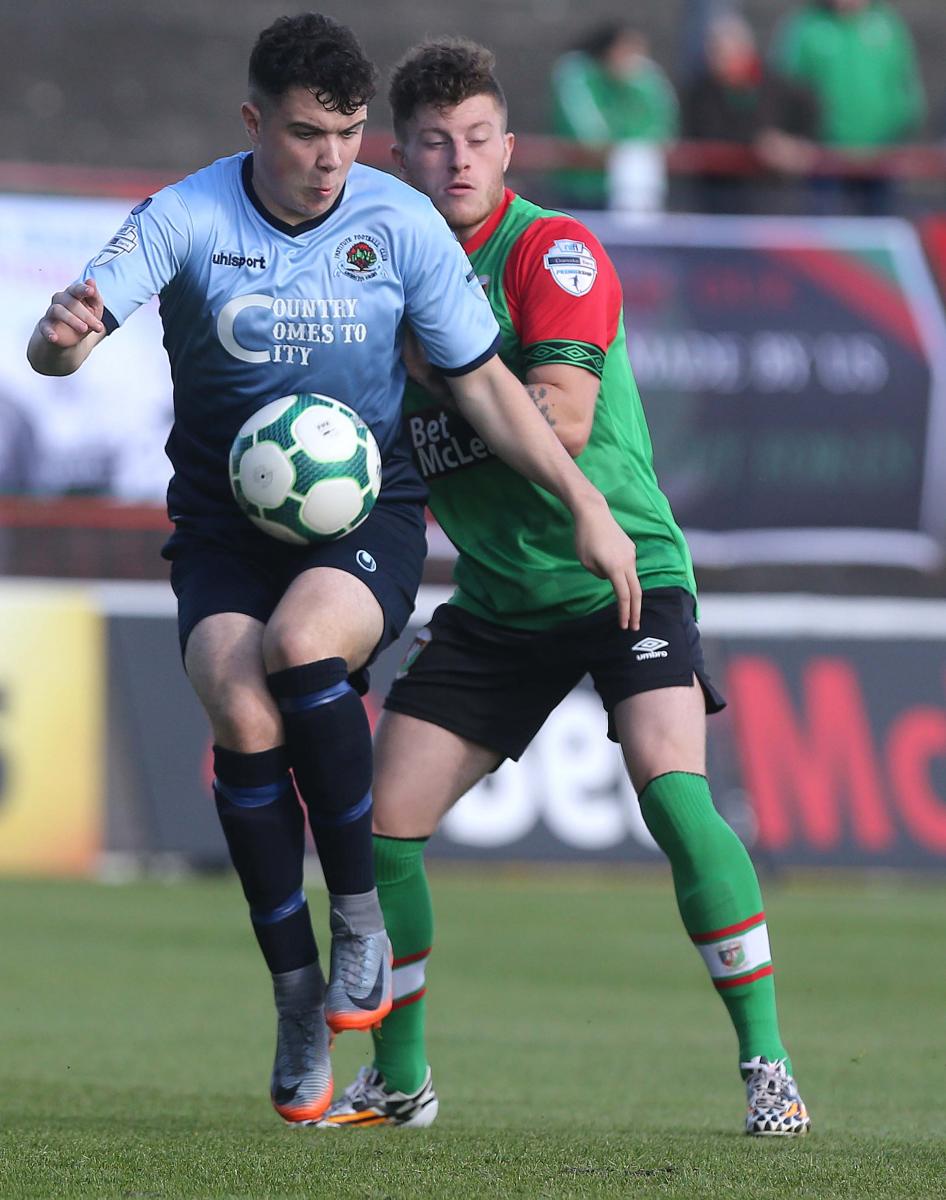 On a sunny autumn afternoon and in front of a decent home support, the Glens took a while to find their feet. Indeed 13 lacklustre minutes had passed before we had any real goalmouth action but with their first real attack of the game, Glentoran went in front. A quick throw-in near the corner flag saw Marcus Kane find Curtis Allen. Allen did really well to skip past the defender before firing low across the 6-yard box. Unfortunately there was nobody in a green and red shirt to convert but the ball was picked up on the far side by Peter McMahon and he returned it into the danger area where left back, Ross Redman was on hand to force the ball home. 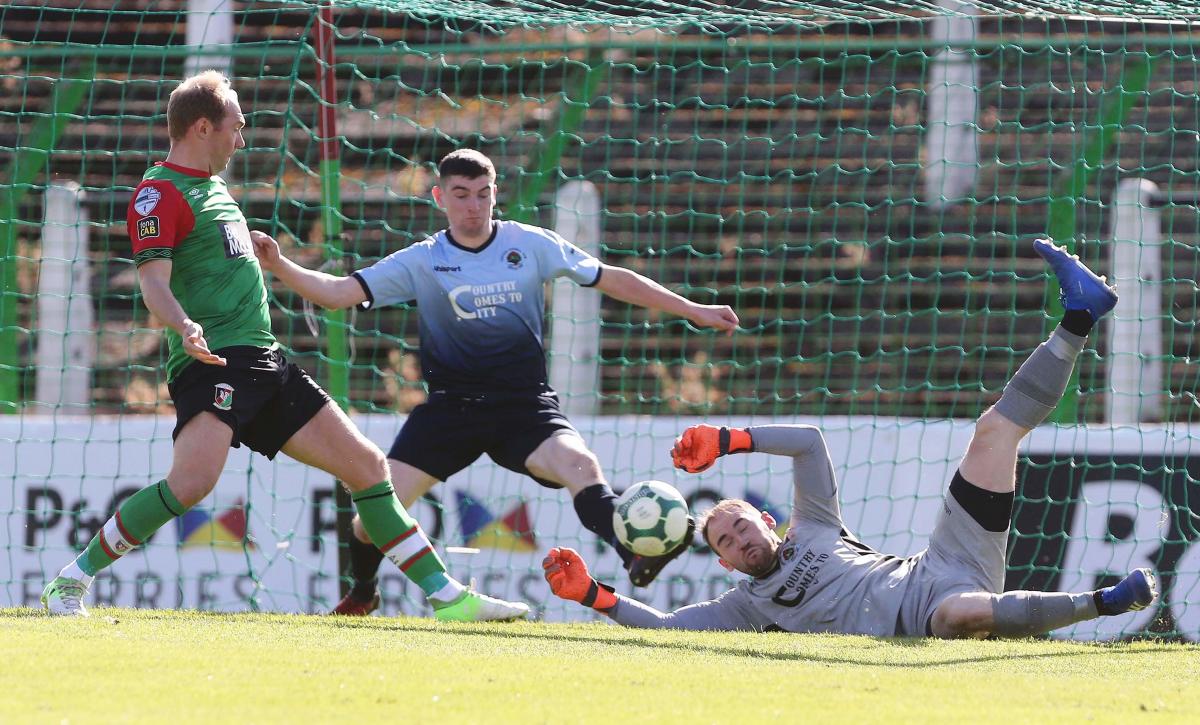 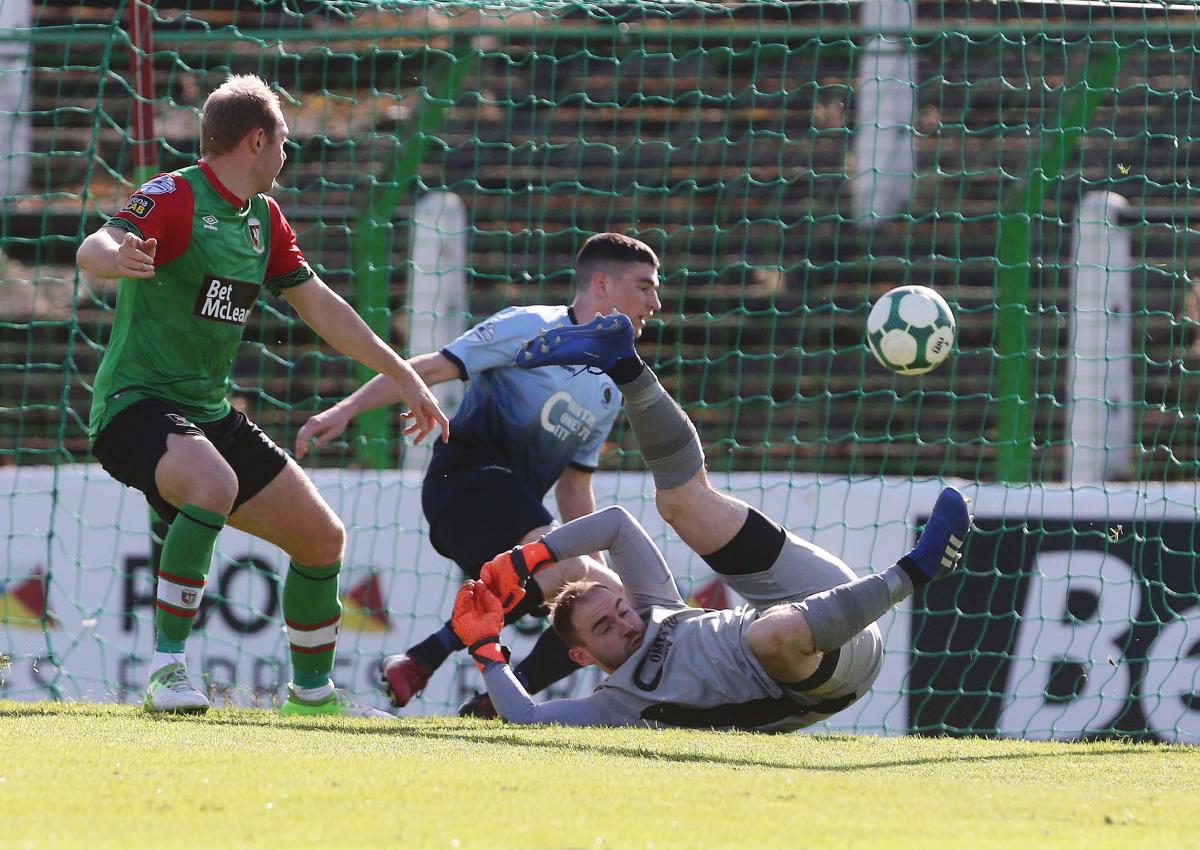 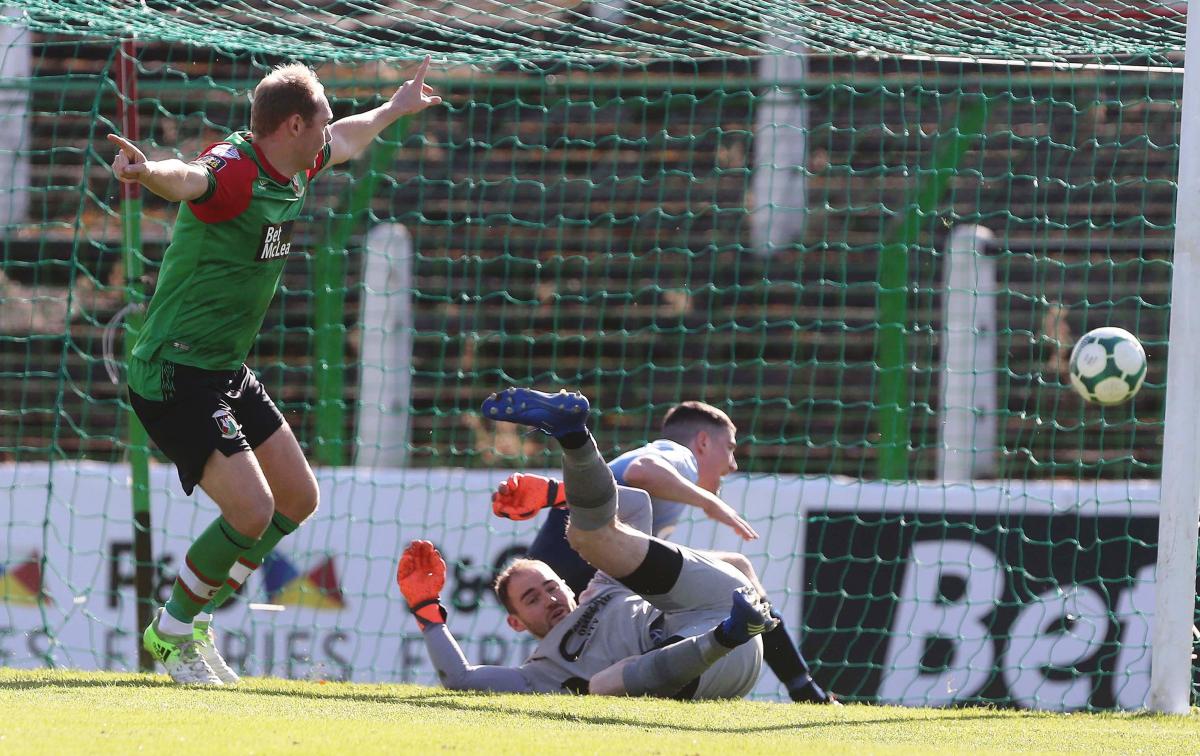 On 17 minutes more positive play from McMahon created a chance for Marcus Kane but the Glentoran skipper's 20 yard effort flashed wide of the post. 10 minutes later a dangerous break from 'Stute almost brought an equaliser but Willie Garrett was well placed to head the ball just past his own post and out for a corner. The visitors didn't make the most of the set piece though and Glentoran won back possession before breaking down field. Marcus Kane and John McGuigan exchanged passes allowing Kane to go through on a 1 v 1 with Martin Gallagher in the Institute goal. The ball broke off the keeper and hit Kane who was less than a yard away. He finished superbly only to then have the goal ruled out for a 'deliberate hand ball'! A somewhat strange decision from referee Timothy Marshall which left the home fans frustrated. 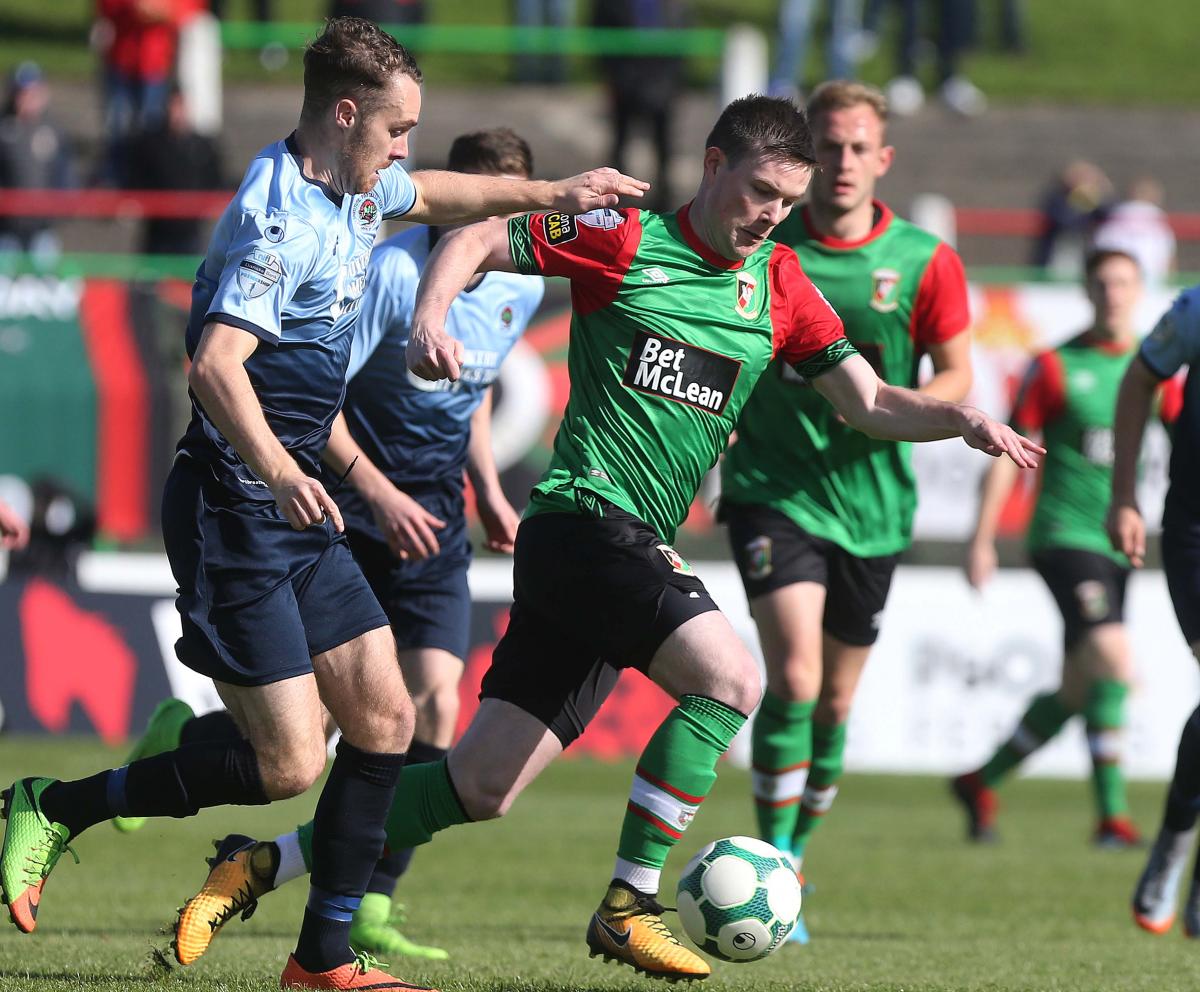 Just after the half hour mark Elliott Morris did really well to turn a 25-yard drive from Jamie McIntyre around the post for a corner. Again Glentoran defended the set piece well but a minute later Institute were awarded another pretty soft free kick. It was taken quickly and McIntyre's cross from the right was turned home by Michael McCrudden. Elliott Morris actually did well to get a hand on the ball but couldn't prevent the goal. 5 minutes from the break another Glentoran attack was broken up by what appeared to be a clear hand ball from a 'Stute defender. The erratic Marshall gave nothing! The home side had two further chances to go into the interval in front. Firstly a 25 yard drive from right back, Nathan Kerr flashed wide of the post and then Redman combined with Allen but the Glentoran number 9 saw his lobbed effort hit the crossbar. 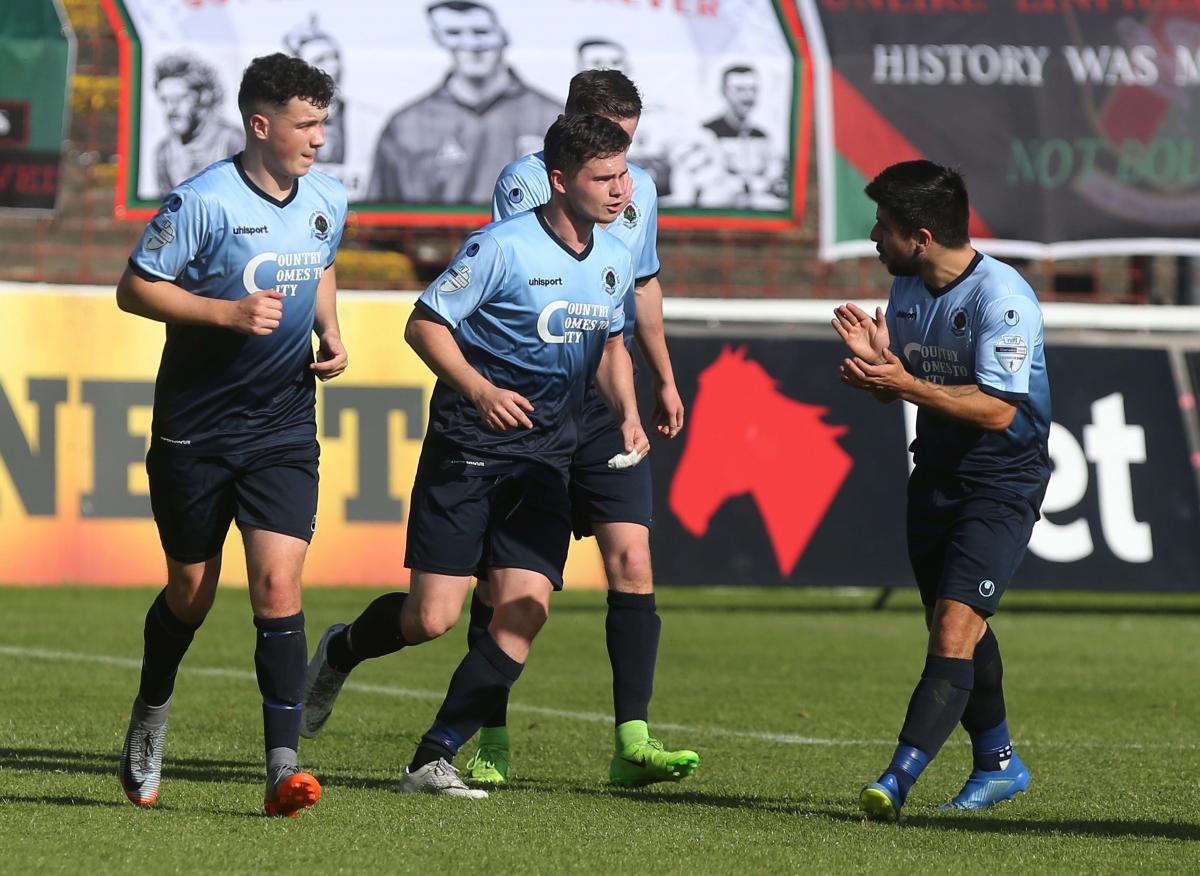 Less than a minute had been played in the second half before Glentoran won a corner. John McGuigan swung it in but nobody was able to make contact and the ball broke to Marcus Kane. He turned it back toward the far post where Calum Birney saw his goal bound header cleared off the goal line. It fell to Willie Garrett though and he gleefully headed home from 2 yards out. From another corner on 52 minutes Birney again rose highest but again there was an Institute defender on hand to clear off the line. Ten minutes into the second half and we almost had another 'Goal of the Season' contender from Peter McMahon but his 20 yard drive was inches from finding the top corner of the goal.

On 70 minutes an Institute attack was halted just outside the box and the ball cleared. Once again though Timothy Marshall penalised Glentoran for deliberate hand ball! Fortunately the resulting free kick sailed well over the bar at the City End. Substitute Stephen Curry went close on 74 minutes; his 20 yard snap shot well saved by the evergreen Elliott Morris. With 3 minutes remaining Dean Curry broke from his own half and unchallenged, let fly from around 25 yards. The shot was well off target though. Aaron Harkin also tried his luck from close range but again Morris was able to watch the ball fly harmlessly wide. In stoppage time and with 'Stute on the attack, the Glentoran defence intercepted the ball and Connor Pepper broke away. In a lung bursting run down the left touchline he appeared to be fouled on at least two occasions however nothing was given. The home support appreciated his effort though and moments later the final whistle blew. Glentoran now face a trip to Warrenpoint Town next Saturday and will be very much looking to consolidate their position in the Danske Bank Premiership table.