Glentoran got back to winning ways at the Oval this afternoon despite Eddie Patterson being forced to field an under strength side due to injury and suspension.  Aaron Hogg took the goalkeeper’s jersey after Elliott Morris’s red card last week while Mark Clarke moved to centre back, replacing the injured Colin Nixon, to partner Jimmy Callacher who was making his 100th appearance for the club.  On the plus side Stephen Carson returned to the starting line up after a spell out with injury.

It was a slow start from the Glens with the visitors posing more of a threat and Andrew McGrory came close on six minutes when he fired into the side netting.  A couple of minutes later an under hit back pass from David Howland presented former Glens striker Matty Burrows with a golden opportunity but Hogg was quickly off his line to clear the danger.  The Glens first effort on goal didn’t come until fourteen minutes when Jim O’Hanlon fired wide but the home side then managed to find some attacking threat and came closer still just two minutes later.  From a free kick thirty yards out Stuart Elliott hit a wicked low drive past the wall which looked to be sneaking just inside the post but Andy Coleman in the Glenavon goal did well to cling on.  Coleman was in action again five minutes later when he got down to turn a John McGuigan shot round the post after he was set up by Carson.

The spell of Glentoran pressure finally paid off just short of the half hour mark.  Richard Clarke showed some tenacity and neat foot work on the edge of the Glenavon box to turn and hit a low left foot shot which sneaked in off the foot of the post.  Just before the break Stuart Elliott was denied once again by Coleman with the best save of the game.  Sean Ward whipped in a wicked cross from the right and Elliott’s flashing header from ten yards looked to be destined for the bottom corner before the ball was brilliantly turned round the post at full stretch by the Glenavon number one.

After the break Glenavon, having made two half time substitutions, came out with much more purpose but were unable to create any clear cut chances.  Indeed the Glens could have stretched their lead when Carson slipped the ball through to O’Hanlon after a great run but his shot sailed over the bar from a tight angle.  The same player had a much better opportunity to double the lead on sixty three minutes when he beat the offside trap to run clear on goal, but his effort was a weak one and Coleman was able to make an easy save.  On seventy minutes the Glens looked to have paid the price for those missed chances when Glenavon grabbed the equaliser.  The ball was given away cheaply to Marc Brown who skilfully evaded a couple of challenges before driving a low right foot shot from the edge of the box which flew into the net giving Hogg no chance.

However the home side responded almost straight away, Carson’s cross from the left headed down by Richard Clarke to David Howland whose shot was deflected for a corner.  Carson took the resulting kick and found Mark Clarke unmarked at the far post who headed goalwards.  The ball was cleared by a defender standing on the line but referee Davy Malcolm and his assistant ruled that the ball had already crossed the line and there were few complaints from the Glenavon players.  The Glens saw out the rest of the game in reasonable comfort but there was a late scare when a superb Gary Hamilton cross from the left looked likely to end up in the back of the net before Hogg did brilliantly to fingertip it off the head of a Glenavon forward at full stretch. 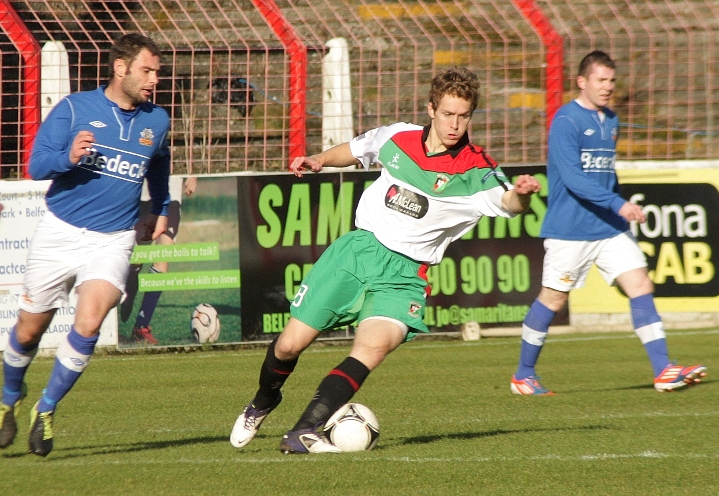 So the first win in the League for a month and the fans will be looking for more of the same as they make the trip to Suffolk Road to take on basement club Donegal Celtic next Saturday.