Two second half goals were enough to give Glentoran three points in a scrappy encounter with Ballinamallard United on a bitterly cold night at The Oval. Goals from Willie Garrett and Curtis Allen were enough to overcome Sean Noble’s first half opener. Glentoran made one change to the side that won 4-0 at Ballyclare Comrades on Saturday with James Knowles coming in for the suspended Dylan Davidson. On a frosty night the game started slowly with both teams looking cautious early on. Five minutes in Glentoran thought they had the lead as a long ball saw Curtis Allen outmuscle the last defender and lob the ball neatly over Richard Brush into the net, only to see Ian McNabb deem his contact with the defender to have been a foul. The visitors were next to threaten when a defensive lapse from Birney let Joshua McIlwaine in but he dragged his shot harmlessly wide of Morris’ post. Willie Garrett and Peter McMahon then went close for Glentoran, Garrett volleying over after a short corner and McMahon heading wide from a neat Curtis Allen cross as both teams found it difficult to create chances in the opening half
an hour. 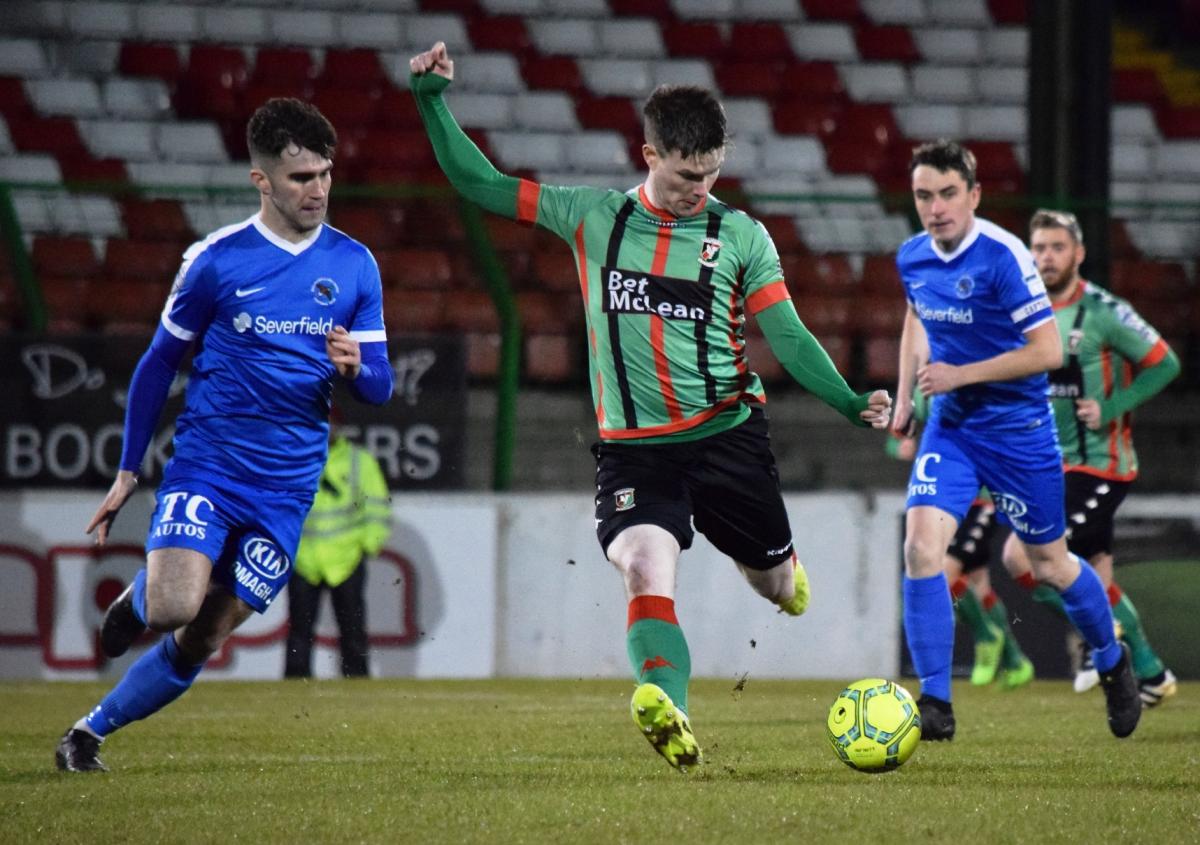 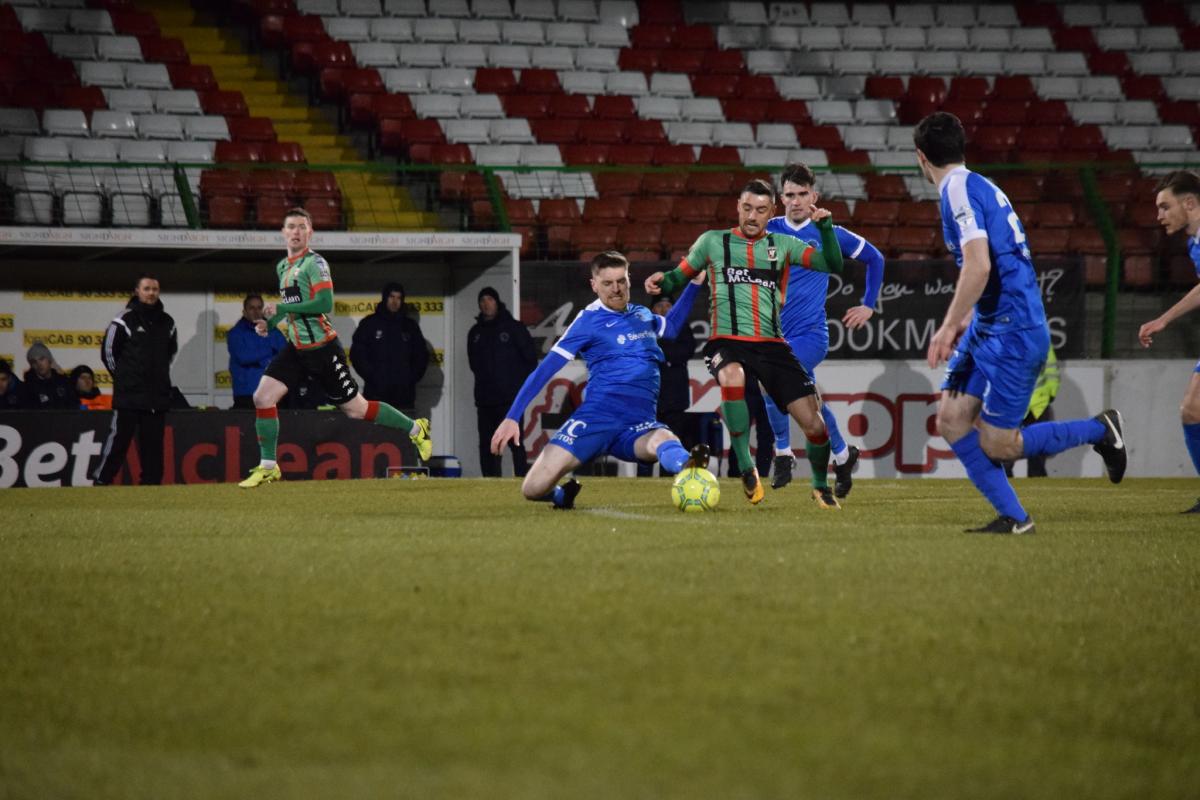 Ten minutes from halftime Ballinamallard took the lead, Jonathan Leddy was given far too much time and space 30 yards out from goal, his shot at goal looked to swerve late and Morris could only parry it back into the middle of the penalty area where Sean Noble was first to the loose ball and tucked it into the net. This prompted a reaction from the home side as John McGuigan controlled a flick from Allen but shot tamely at the keeper instead of taking the final defender on and Ross Redman almost found Curtis Allen at the back post with a driven cross following good work from Alex O’Hanlon. Then just before the break came a moment that changed the game, Curtis Allen raced through and beat the advancing Richard Brush to the ball, Brush, trying to play sweeper-keeper took Allen out, leaving referee McNabb little option but to send the Mallards goalkeeper off. It seemed if play had been allowed to continue James Knowles may well have been able to put the loose ball into the unguarded goal but the decision was made. Captain James McKenna took over in goal and comfortably dealt with the resulting free kick. 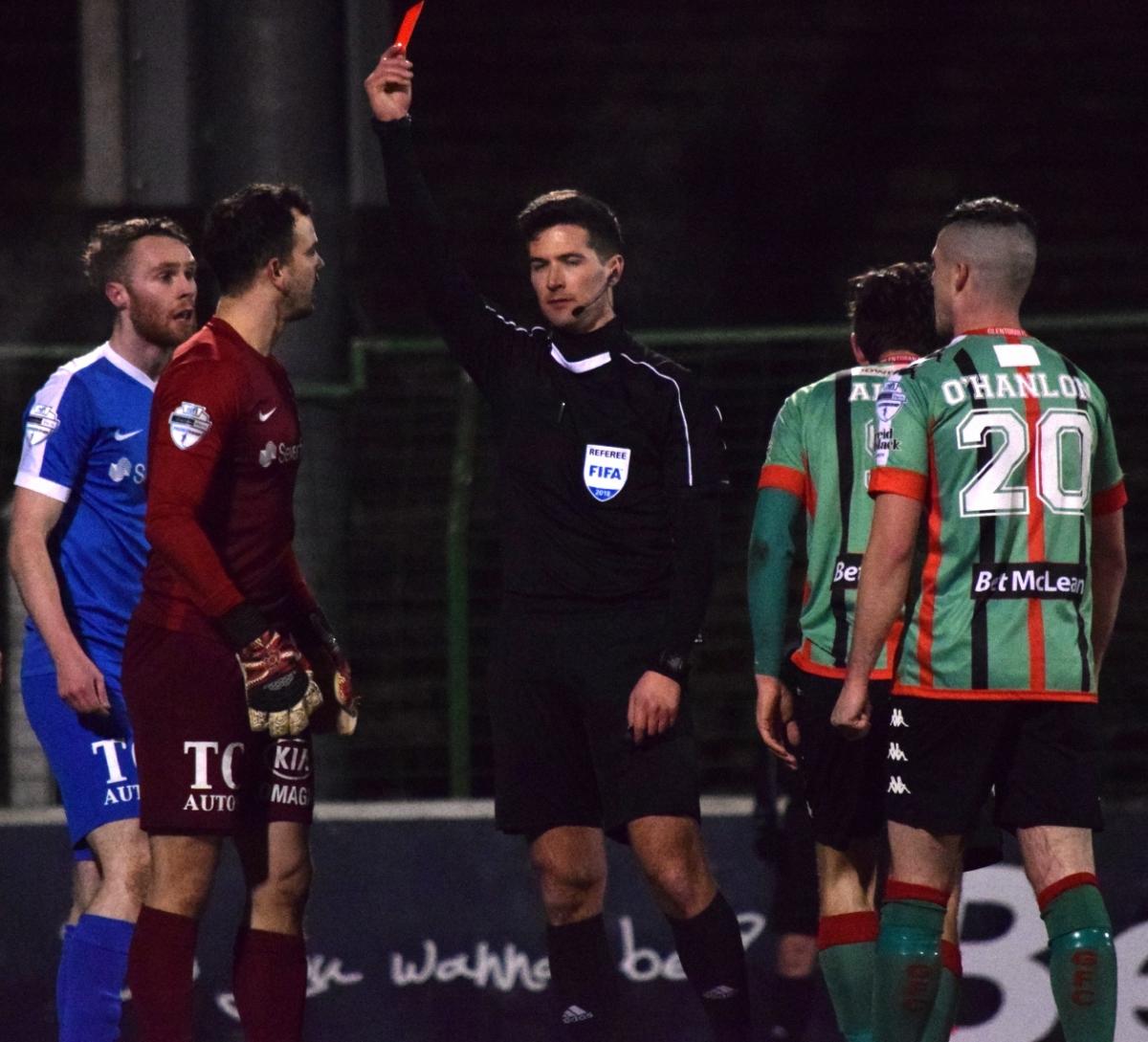 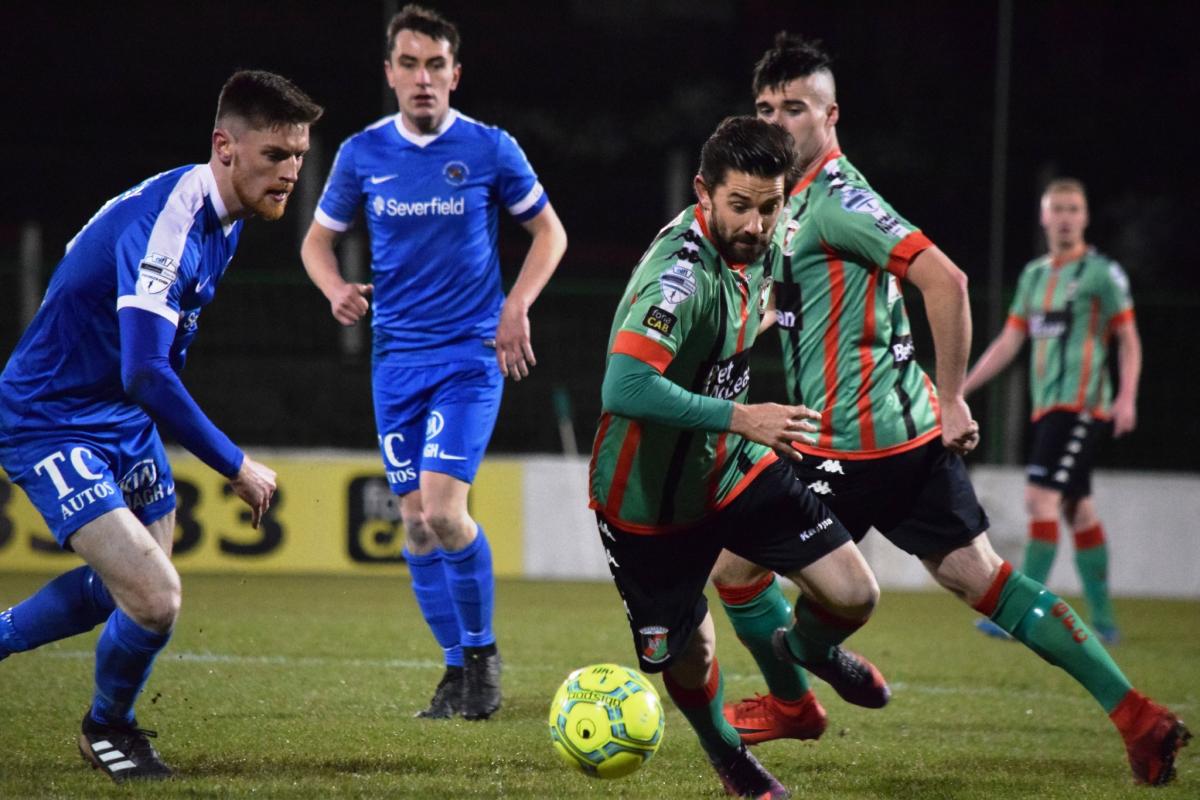 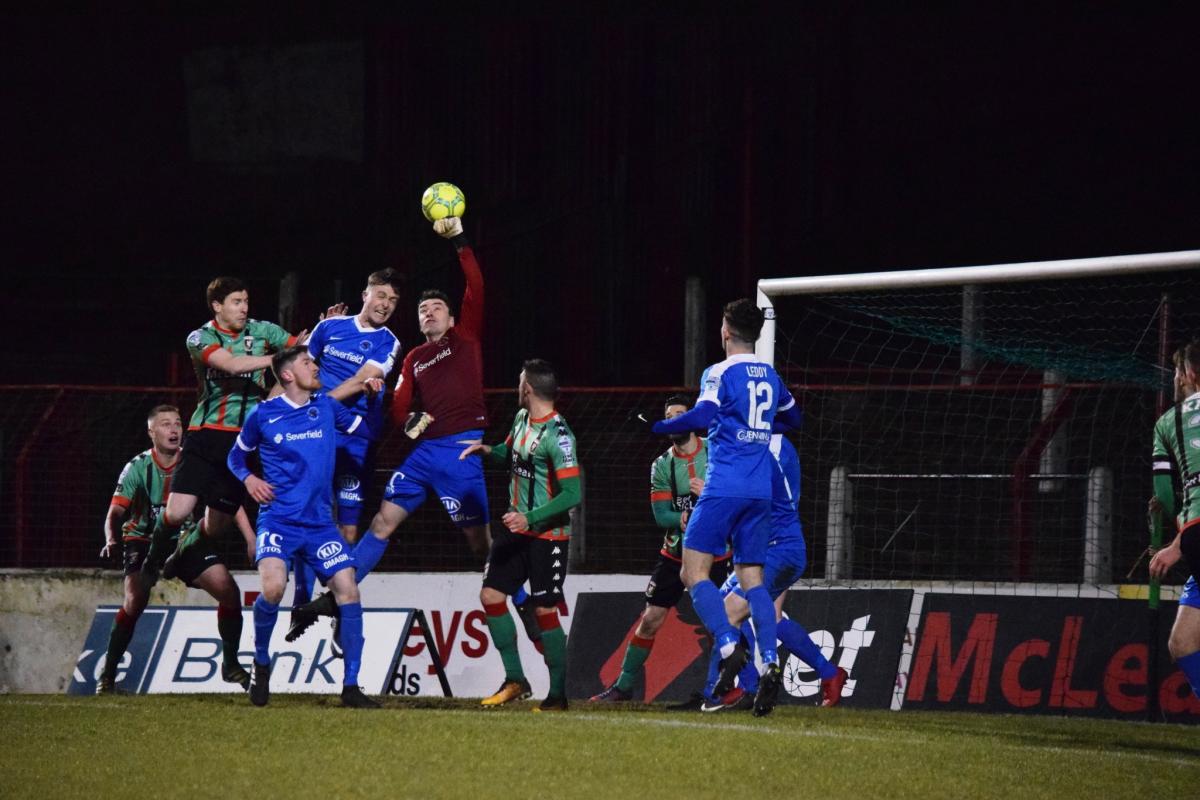 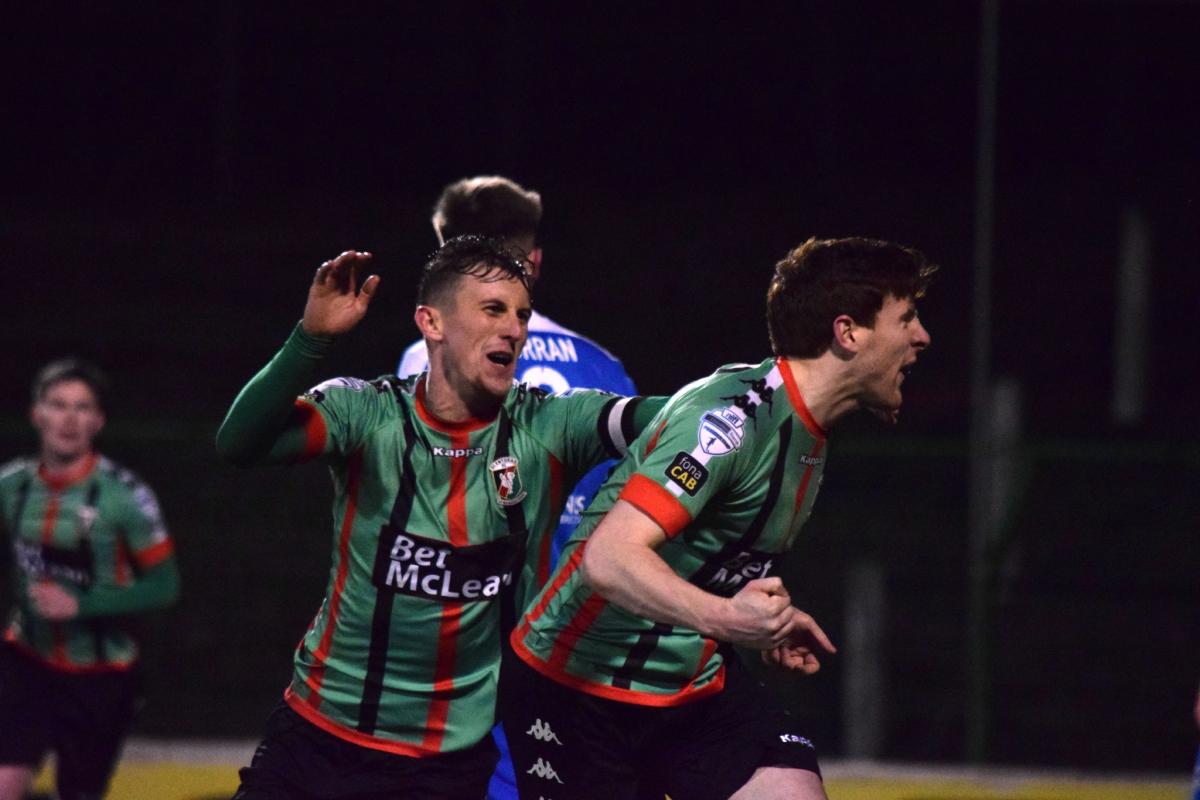 Early in the second half it was clear Glentoran were intent on testing McKenna’s goalkeeping ability but McMahon, Knowles and Kane (twice) were all off target from outside the penalty area within the opening fifteen minutes of the half. During this spell Ryan Curran almost doubled the visitors lead with a looping header that struck the crossbar. It was beginning to look like the home side would be frustrated, stand-in McKenna did well to deny Allen one on one and dealt well with a trio of Glentoran corners which were whipped in under his crossbar but with 25 minutes remaining the breakthrough came. A James Knowles free kick was deflected behind and from the resulting corner Willie Garret saw his header deflect in off a Ballinamallard defender. The visitors regrouped and were obviously content with a hard earned draw, but they were to be denied 15 minutes from time as Peter McMahon worked the ball out from under his feet in a crowded penalty area and shot through a crowd, the strike appeared to be going wide but Curtis Allen was there to finish smartly into the roof of the visitors net to win the game. The defenders were left looking for a flag that never came, one man near the corner flag appearing to play Allen onside. 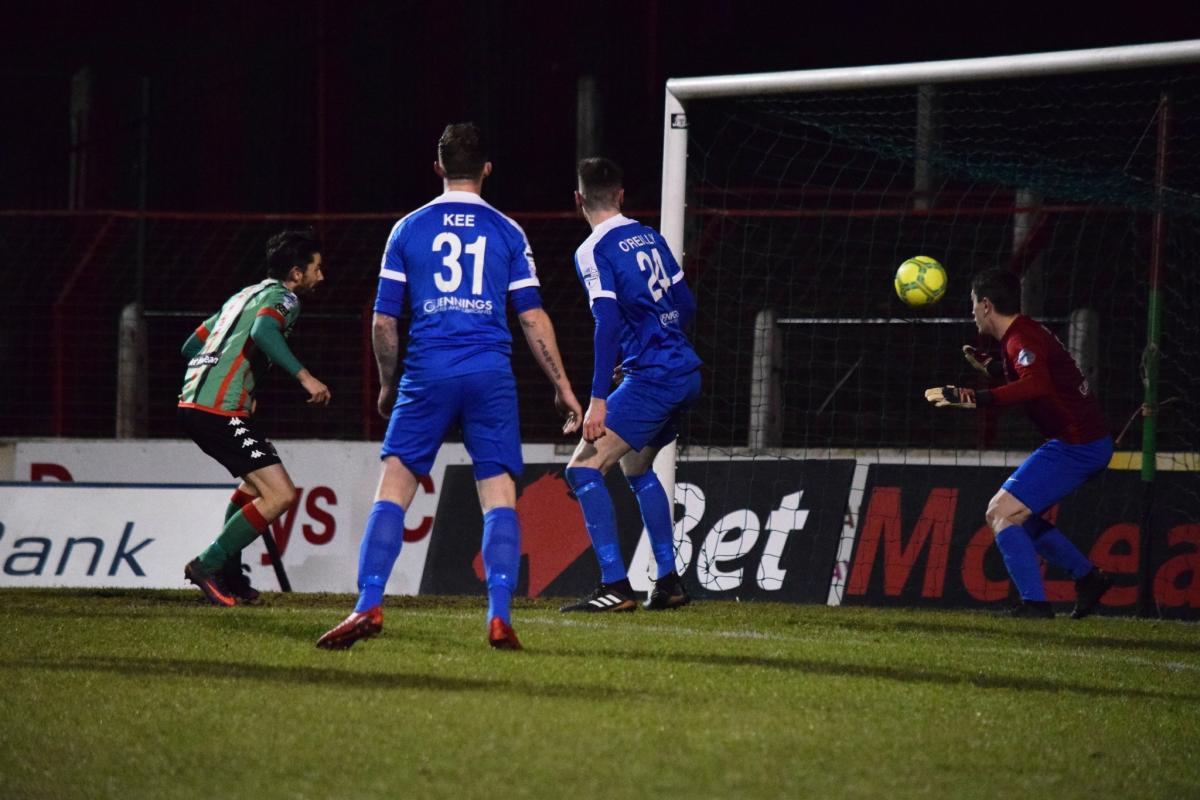 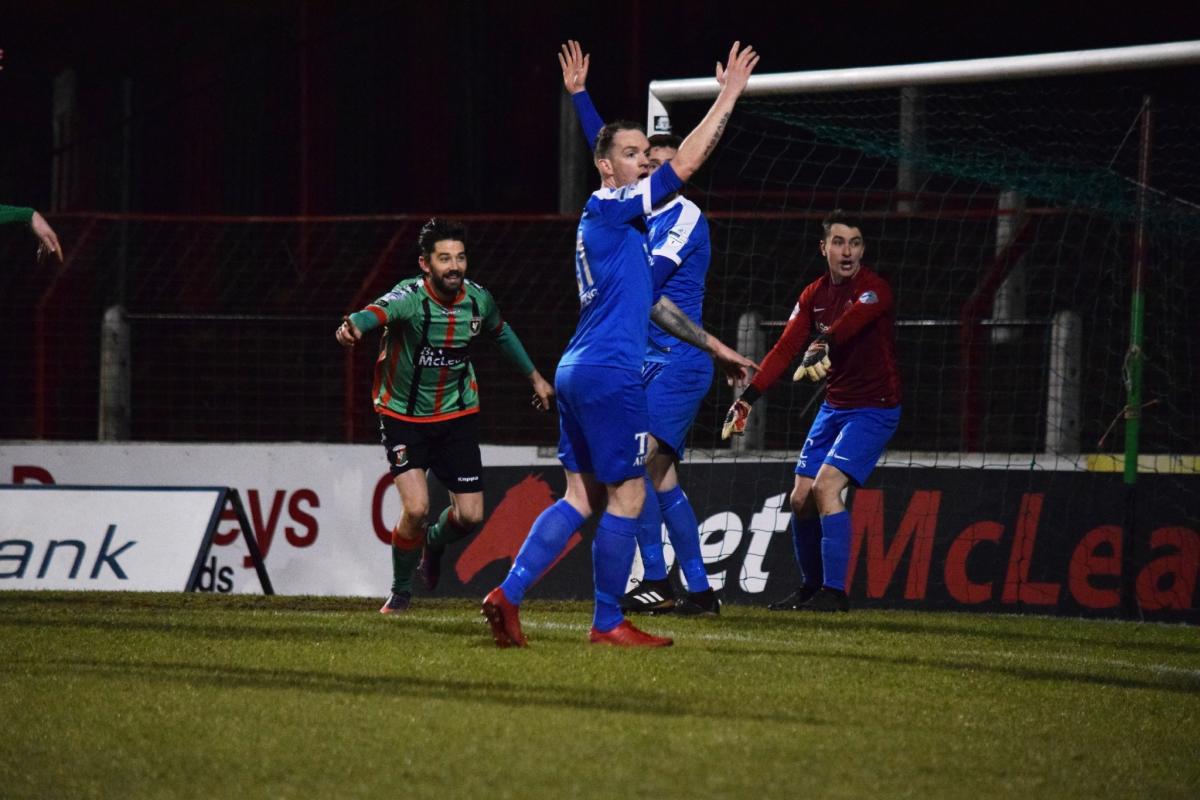 From this point it was always going to be difficult for the visitors but their task was made all the more difficult by the dismissal of David Kee when referee McNabb gave the Coleraine loanee what appeared to be a straight red card for his protest of the goal, even though the former Linfield man had also been booked for dissent earlier in the half. Glentoran were able to comfortably see out the remaining 10 minutes for a scrappy but much needed three points but Gary Haveron knows that his men will need to be sharper when they visit leaders Crusaders on Saturday. 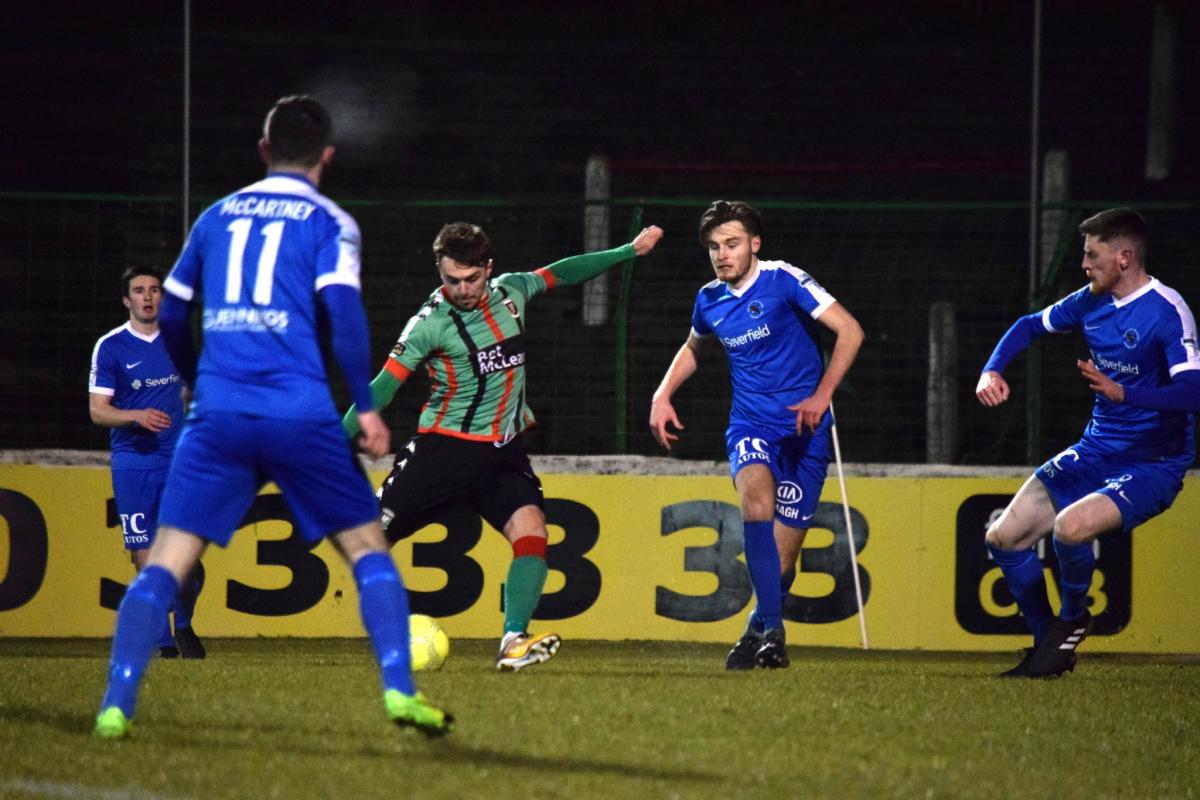 Ballinamallard may feel hard done by but despite their good defensive work they couldn’t hold out. 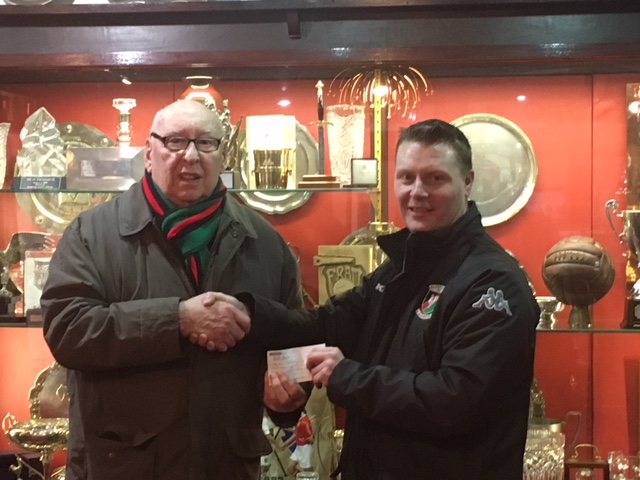 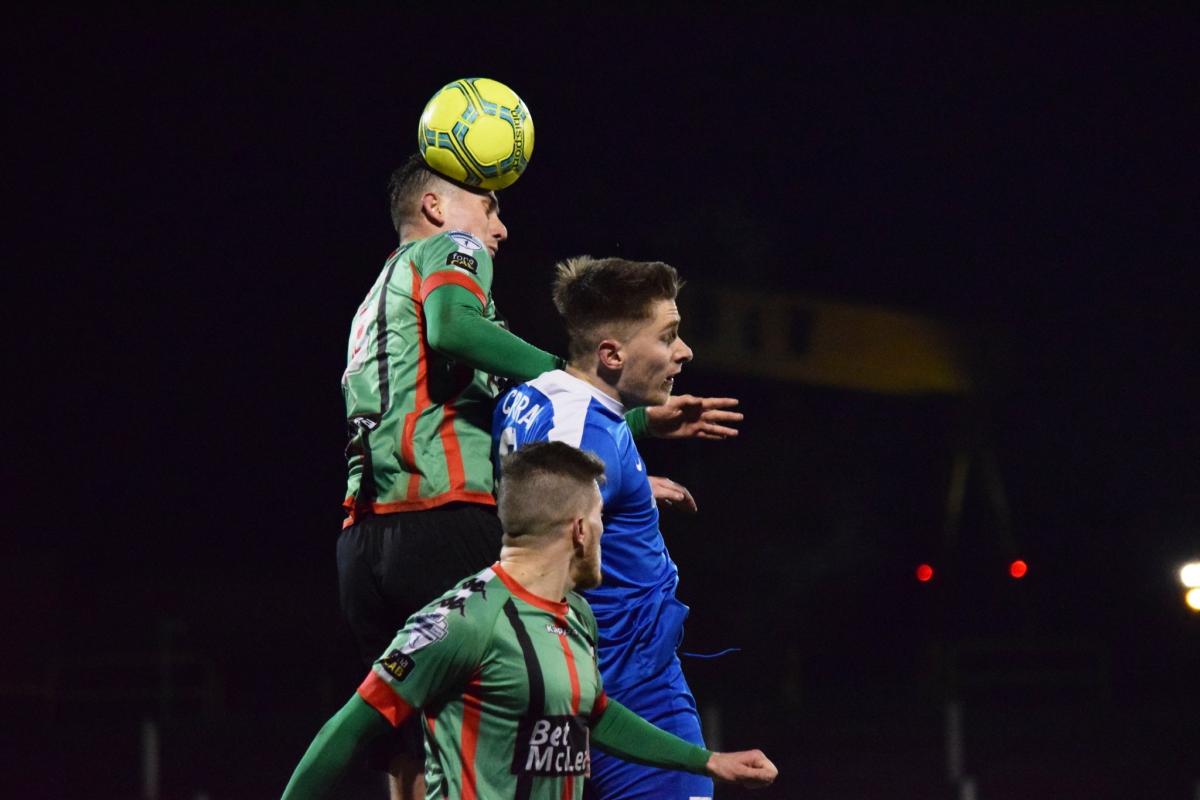