Glentoran’s early season blend of speed and pressure proved too much for Dungannon Swifts on Tuesday night. Second half goals from John McGuigan and Curtis Allen were enough to give Gary Haveron’s men their second win in as many Danske Bank Premiership games. Haveron stuck with the same starting 11 from Saturday’s win at Ballinamallard, whilst Rodney McAree made three changes to his Dungannon side following their opening day defeat to Coleraine with Teggart, Harpur and Addis coming in for McElroy, Brennan and the suspended Coleman. 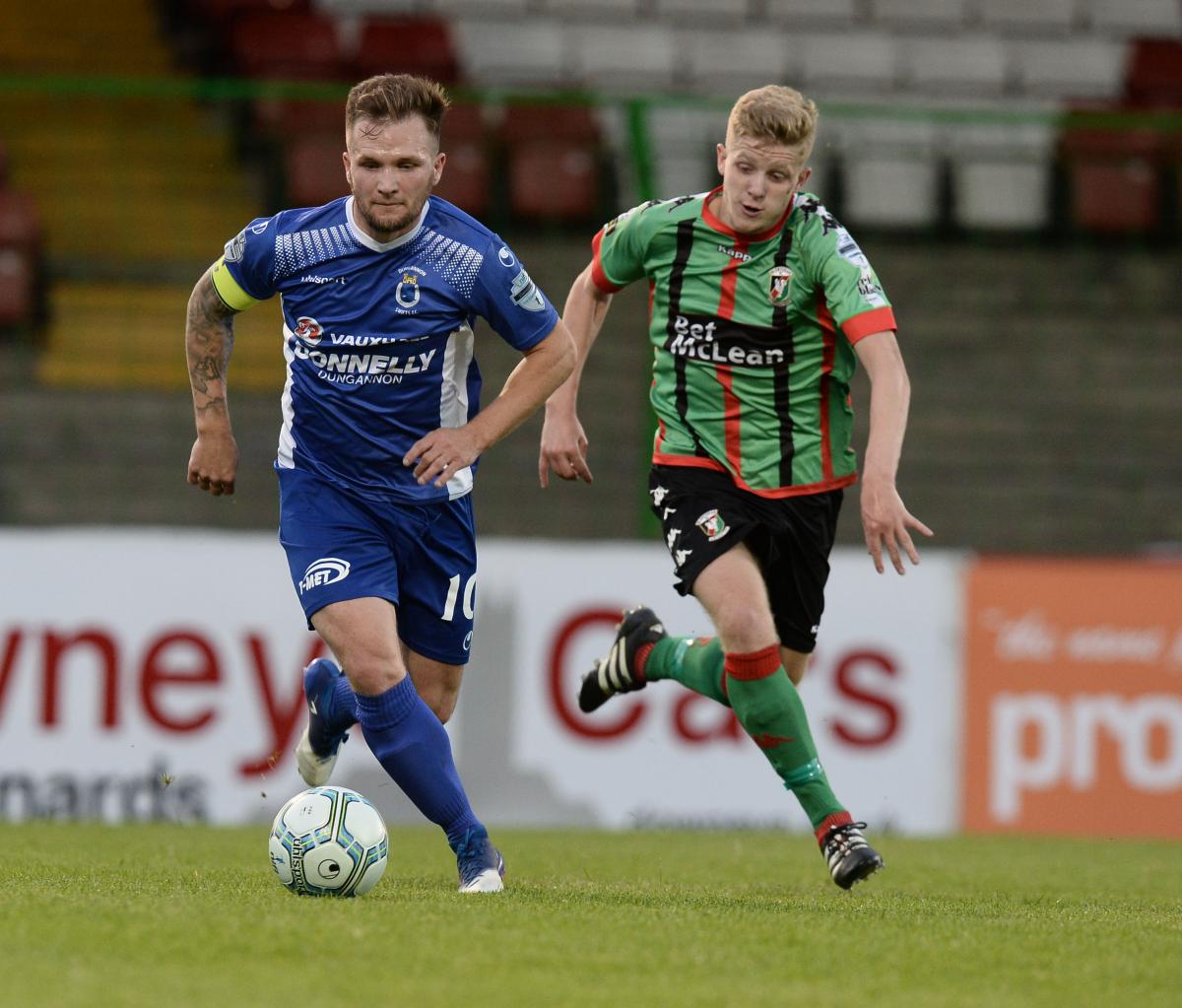 Following their late win on Saturday Glentoran looked full of confidence early on with most of the opening 15 minutes being played in the Dungannon half but they didn’t create anything clear cut early on, Curtis Allen miscontrolled Corey McMullan’s lofted through ball to end the only really dangerous move of the opening stages. Indeed it was Dungannon who should have struck first but Elliot Morris did well to deny a point blank Harpur header. From that save Glentoran countered and Allen brilliantly played McGuigan through but John’s low shot was smothered well by the onrushing Addis when a chip would have surely seen the home side lead. The resulting corner saw Calum Birney’s cushioned volley cleared off the line and then moments later McGuigan headed over from an excellent whipped cross by Dylan Davidson. The former Preston man was to cause problems for the Swifts all night with his left footed delivery. On the other wing Tiernan McNicholl then provided similar danger, getting behind O’Rourke and delivering a cross for Curtis Allen, the frontman was waiting to head in from 4 yards but a late defensive header from Wilson saved the Swifts. The remainder of the half followed a similar pattern as Glentoran sought to use their speed out wide, Nathan Kerr and Ross Redman providing overlapping options for their wingers but the opening goal was proving elusive. Before half time Kerr almost picked out a stretching Allen and Davidson shot harmlessly over, cutting inside after a neat one two with Redman. 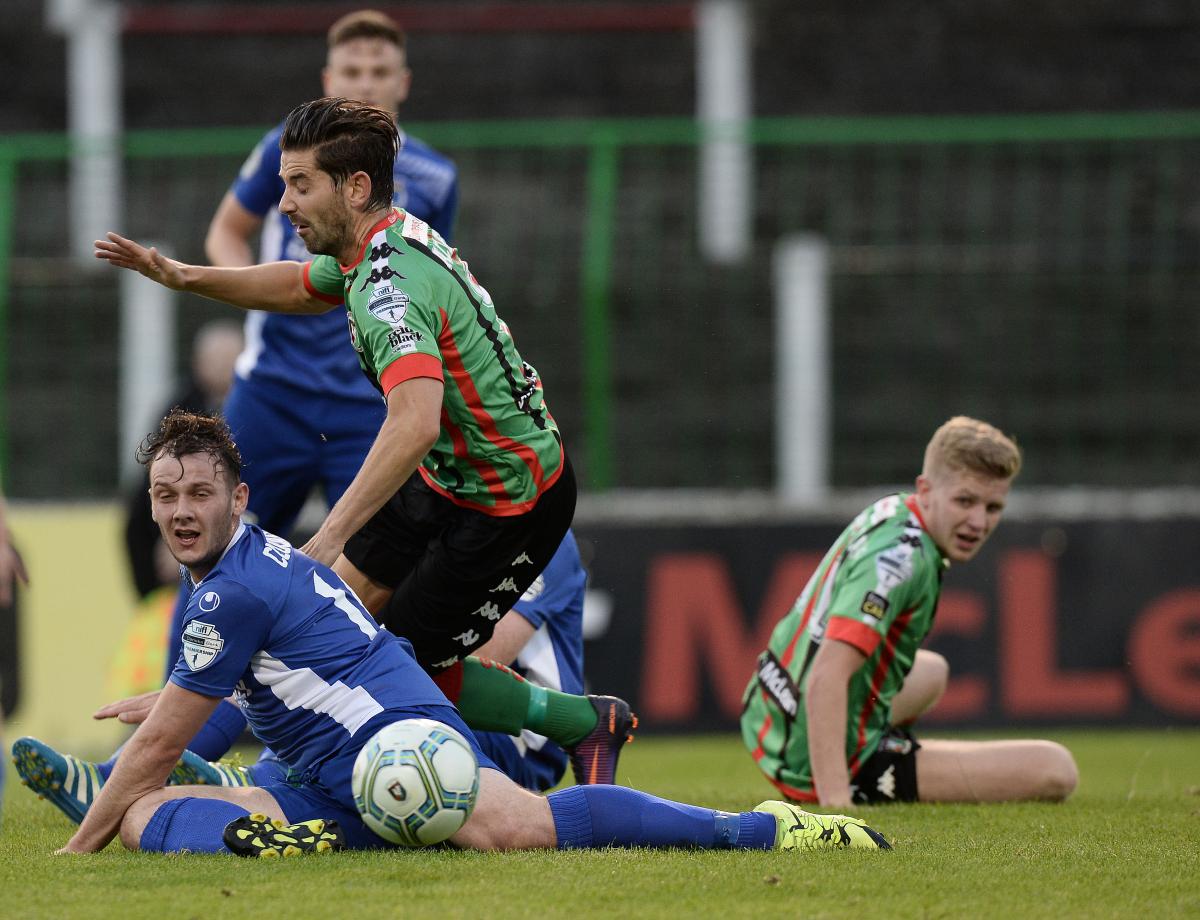 Just before half time McNicholl’s cross fell to Davidson, he shifted inside right back McMenamin but had two crosses blocked, one by Armstrong and the other by goalkeeper Addis with the loose ball evading the lurking McMullan. Cormac Burke went closest for Dungannon late in the half but the home faithful were very satisfied with the performance in the first 45 despite the lack of goals. Halftime Glentoran 0-0 Dungannon Swifts. After all their good work in the first half Glentoran almost suffered an early blow in the second period. A moment of indecision between Kerr and Morris allowed Teggart a header a goal but he couldn’t convert. Three minutes later Glentoran took the lead. McGuigan teed up Allen on the edge of the area, Allen’s shot hit Wilson but rebounded to McGuigan who neatly skipped between McMenamin and Armstrong before sliding the ball into the bottom left corner. McGuigan almost doubled his tally 10 minutes later when Davidson’s cross eluded everyone, the returning midfielder was perhaps surprised that the ball reached him and couldn’t finish on the stretch. 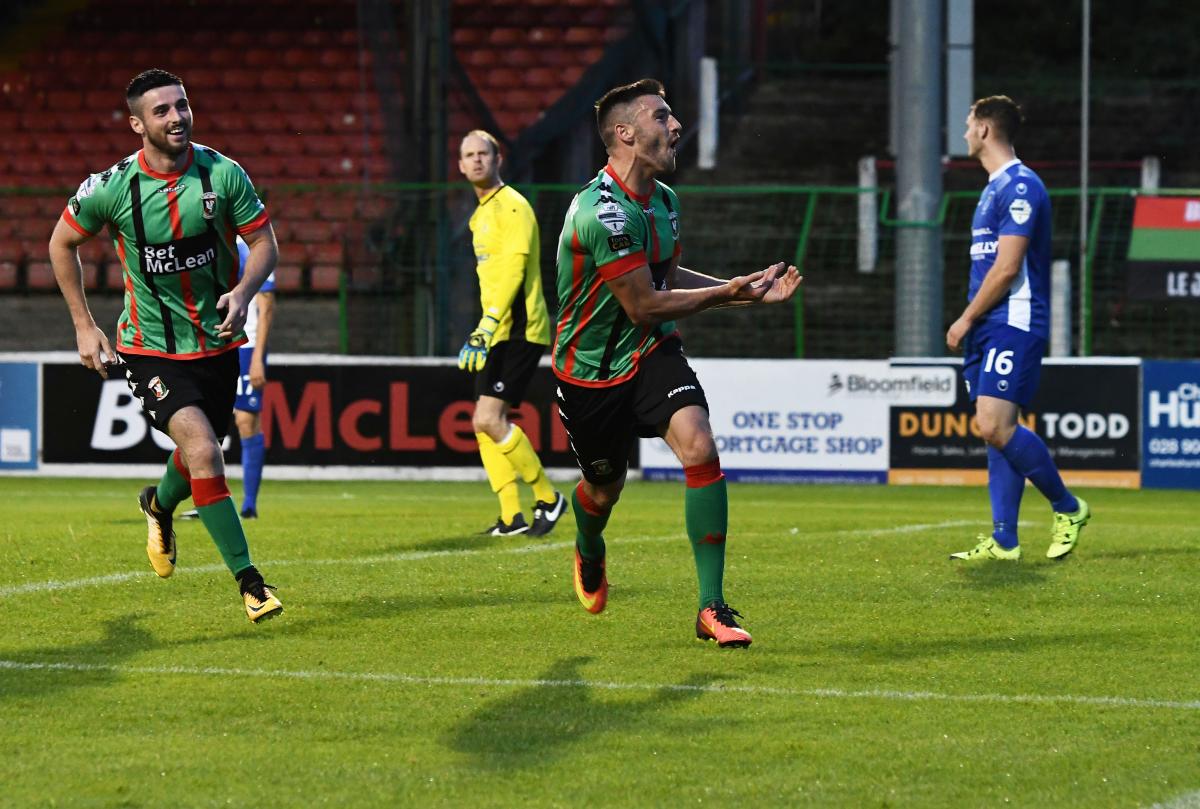 The Swifts had a neat spell where Mayse threatened from long range and McMahon worked an opportunity with some neat skill but Glentoran soon struck the decisive blow. Marcus Kane launched a counter attack as Allen, McNicholl, Delaney and McGuigan bared down on two defenders, McGuigan delayed the pass and Allen used the two remaining runners as decoys before smashing his shot past Addis at the near post to double the lead. A minute later McNicholl robbed O’Rourke and launched another counter but Delaney’s cross was blocked before it could reach Allen. Allen had a couple of late chances to extend the lead and Conal Delaney almost capped off the evening with a delicate chip but he couldn’t dip the ball under the bar.  In the dying minutes Stefan Lavery should have grabbed a consolation with a free header from a corner but he headed over, the clean sheet perhaps reward for a well marshalled performance from Birney and Ferrin.  All in all a pleasing nights work for the Glens, securing a second win of the new season. Carrick Rangers are the visitors on Saturday as we look to maintain our winning start. 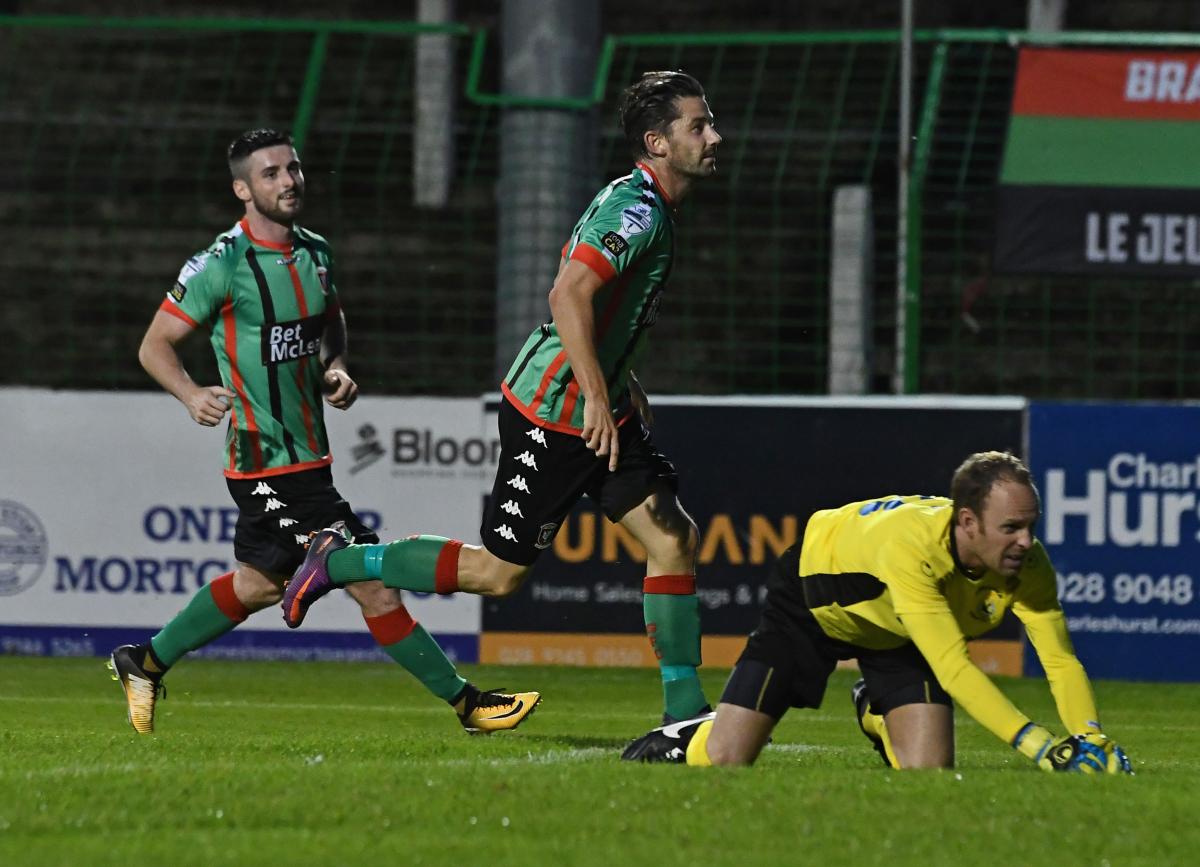 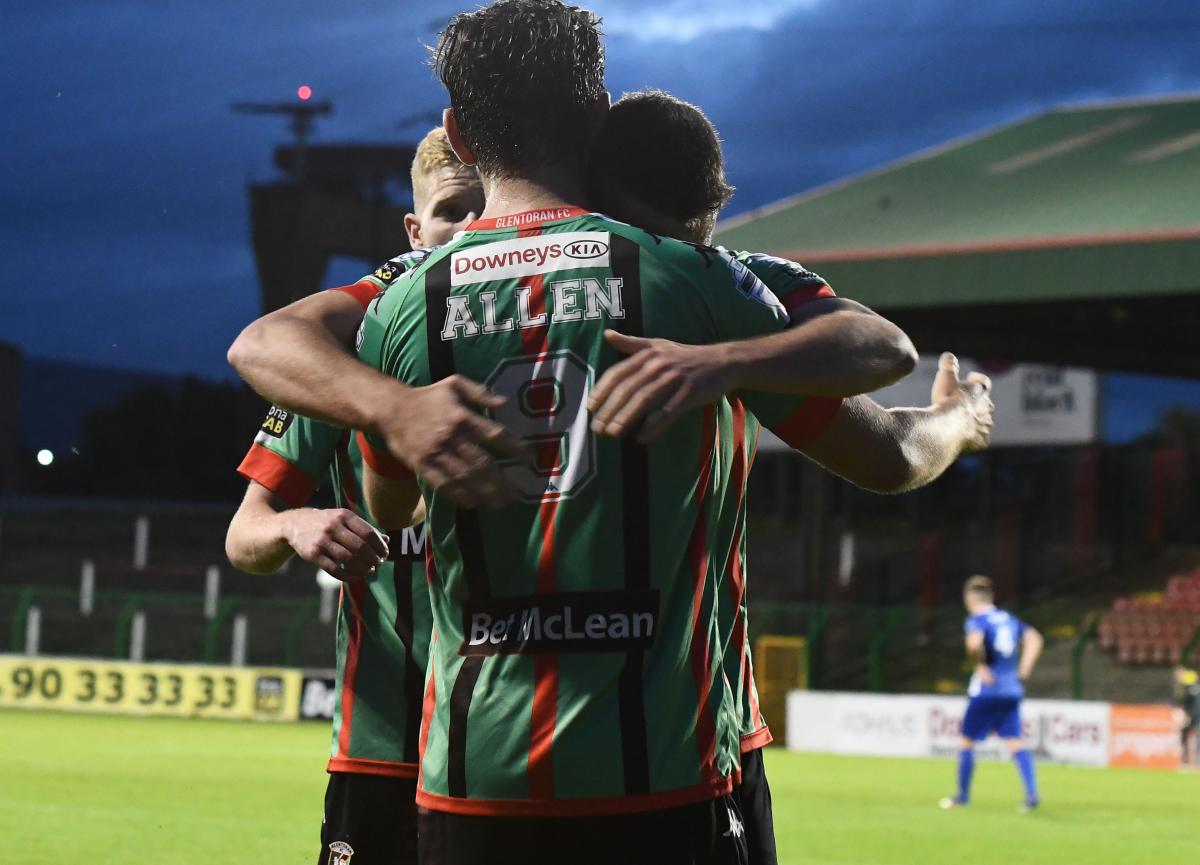