Glentoran’s winless run continued on Saturday as League Champions Crusaders recorded a comfortable 3-1 victory at The Oval. Roy Coyle, still in Temporary charge made one change to the team that drew with Glenavon on Tuesday as he brought Alex Leu in for the injured Nacho Novo, the Spaniard missing out with a groin problem. Stephen Baxter brought his side to East Belfast sitting top of the table and unbeaten in their last 5 trips to The Oval. 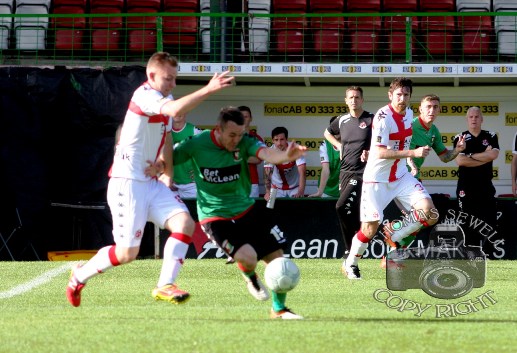 Glentoran lined up with a front pairing of Chris Lavery and Jonny Smith and early on it was clear they intended on getting Lavery in behind the visitors defence but their early probing was ineffective and ultimately it was the visitors who struck the early blow. A long free kick into the box saw Jordan Owens beat the Glentoran goalkeeper Nelson in the air, the loose ball fell to Jordan Forsythe who poked the ball towards the vacant goal only to see Calum Birney clear off the line. The danger never abated however as the resulting Burns throw was nodded down by the unmarked Forsythe for Colin Coates who had time and space around the plenty spot to hammer a low drive by Dwayne Nelson. Shortly after it was almost two as Gavin Whyte controlled a rushed Nelson clearance and brilliantly shimmied inside Magee and Redman but his low effort was well saved by Nelson and Owens couldn’t divert the rebound home. Sadly for Magee his game was to end moments later, Chris Lavery won a Glentoran corner and in challenging for the header Magee fell awkwardly over a defender and landed heavily, he was unable to continue, being replaced by Jonny Addis. 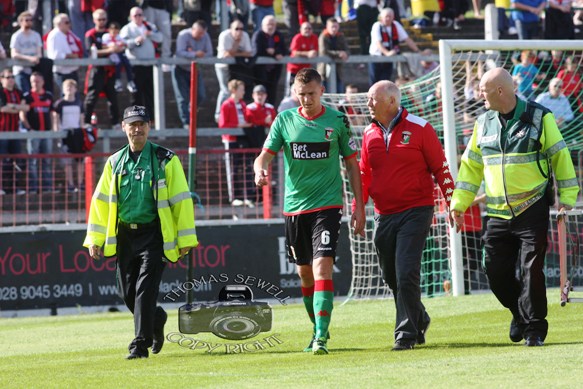 Young Tiernan McAuley was making his second start at right back for Glentoran and almost crafted an equaliser after 20 minutes, following a good link up with Caldwell his whipped cross was glanced narrowly wide by Smith. The game became more open at this stage and Crusaders really should have doubled their lead when Michael Gault’s long cross found Heatley running between Addis and McAuley, Heatley had time to control and volley but Nelson was equal to it, saving again with his feet. The visitors had several half chances in the ten minutes that followed, the best of them headed straight at Nelson by Jordan Owens. However, just before half time the Glens were level. Not for the first time Lavery got behind Beverland as Harmon played him through superbly, his prod at goal hit the base of O’Neill’s post but Jonny Smith followed up, rounded the sprawling keeper and slotted home. Half time Glentoran 1-1 Crusaders. 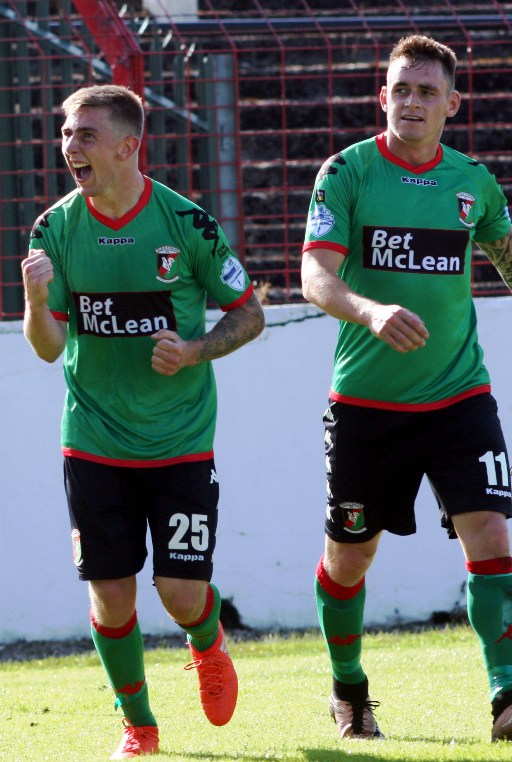 Glentoran made a change to start the second half, welcoming back Curtis Allen after an illness layoff, he replace Alex Leu. The second 45 started sluggishly with neither side really imposing themselves. Jordan Forsythe’s optimistic flashing volley was the closest either side came in the opening 15 minutes of the half. At that point Glentoran supporters may have felt that they could go on and snatch a much needed win but it wasn’t to be, Crusaders sealed the game with a quickfire double just after the hour mark. Substitute Michael Carvill seemed to add an extra element to the visitors after he replaced Gault and it was Carvill’s cross that lead to the second goal. Jordan Owens outjumped the combination of Redman and Addis to head back across the goal, Nelson scrambled along his line but he couldn’t keep it out, seeing it hit the post and cross the line. A minute later it should have been three, Birney left a long ball whilst unaware of Heatley’s presence behind him but Nelson saved his centre back as he smothered the winger’s finish. Unfortunately for the home side the third wasn’t long in coming. In a moment a magic from Heatley, he skipped by Birney, used Whyte’s run as a decoy and picked out the free man in Declan Caddell who sealed three points with a thumping header. Late on the returning Curtis Allen had a good chance saved after he was played through following good combination work from Foley and Smith but it was an ultimately frustrating day for the Glens as Crusaders remained comfortably in control throughout the second half completing a 3-1 win. The Glens will be desperate to find a win to halt the current run, the next chance comes on Tuesday as we visit Dixon Park, Ballyclare to face Championship side Ballyclare Comrades in the County Antrim Shield. 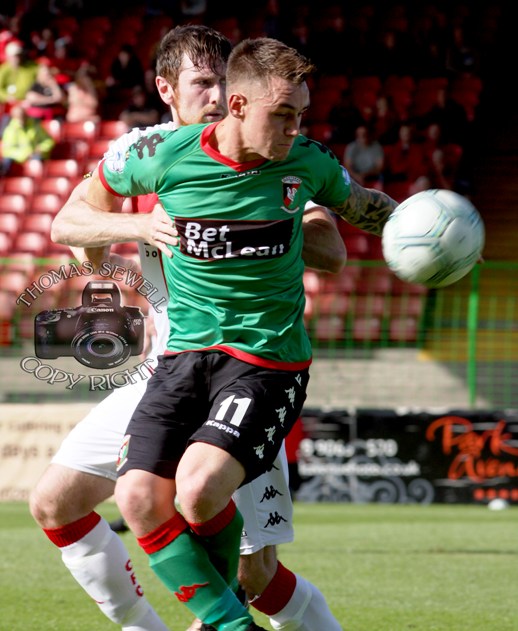