Glentoran bowed out of the Tennent’s Irish Cup today after a 2-1 extra time defeat to Linfield. Curtis Allen put the Glens ahead in the first half but Stephen Lowry equalised after an hour and Andrew Waterworth scrambled in the Extra Time winner to end the home side’s participation in this season’s cup. 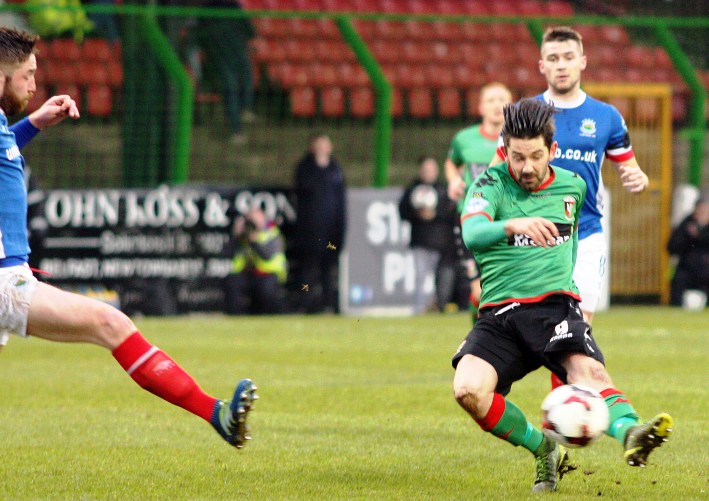 Glentoran named an unchanged 11 for the game, manager Gary Haveron understandably sticking with the same 11 that thumped Portadown 5-0 on Tuesday night. Before kick off the home fans were given the chance to congratulate the Glentoran Academy’s Under-13 side. The all-conquering side recently completed an incredible treble. The NIBFA Cup and Foyle Cup winners beat Cherry Orchard 4-1 in the DB Sports Champions Trophy Final on the 28th December and the boys got a well-deserved excellent reception as they paraded their trophies in front of the home support.

As the potential stars of the future left the field the players of today shared a cagey opening 10 minutes with their South Belfast rivals, a surging run by Mulgrew was well blocked by Jay Magee early on and Nacho Novo tested Carroll following good wok by Ross Redman but neither team looked willing to open the game up within opening stages. Redman was causing problems cutting in from the left side but Stafford and Haughey prevented Glentoran creating anything clear cut. 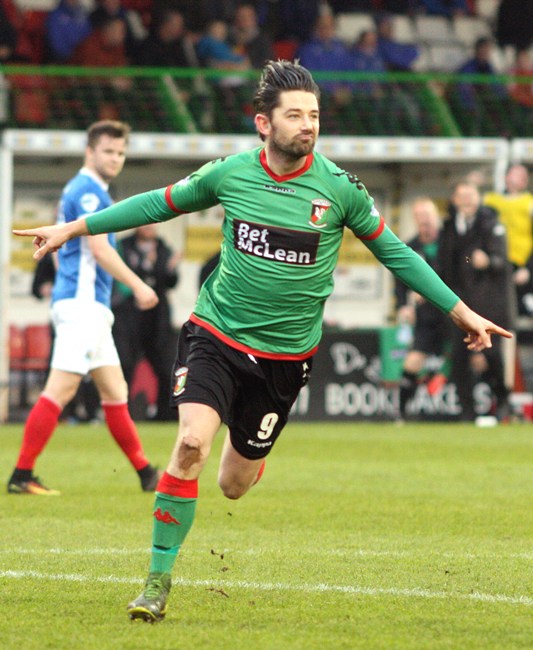 On the quarter hour mark the game was sparked by Curtis Allen. Moments after Mark Haughey did well to prevent Allen latching on to a long through pass a Glentoran counter attack brought the first goal. Aaron Harmon and James Ferrin combined to find Allen who used Lavery as a decoy and curled a 25 yard shot brilliantly into the corner past the helpless Roy Carroll. Glentoran consolidated well following the goal and restricted Linfield well, but towards the half hour it was clear the visitors were improving, they forced a series of corners which were all well dealt with and then shortly after Quinn curled a free kick over the bar. Ten minutes before the interval Linfield almost levelled when Lowry played Waterworth in, he slid his shot beyond Morris but it hit the post. As the away fans prematurely cheered, Ross Redman was on hand to hook the ball off the line to ensure the Glens kept their lead.  Just before half time Jay Magee was on hand to divert a low Matthew Clarke cross behind as several blue shirts waited behind him. Glentoran led at the break with their early efforts paying off, Linfield started slowly but created the better chances as the half drew on. Half Time Glentoran 1-0 Linfield 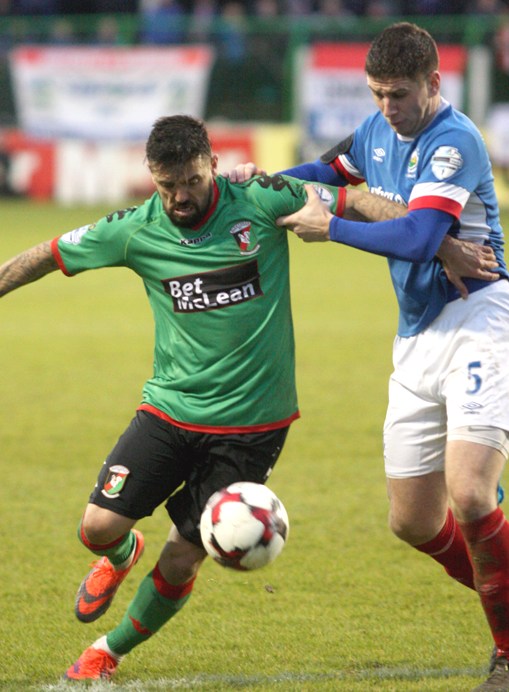 Immediately following the restart, the lively Nacho Novo was set free down the wing by Allen, he did well to cut inside but his cross was eventually cleared after Casement failed to deal with the initial ball. Glentoran were beginning to look comfortable, with Magee and Addis dealing with any threat easily but on the hour mark Linfield levelled. A sustained period of pressure paid off as the Glens only half cleared their lines from a corner, substitute Gaynor outmuscled Lavery and crossed to an unmarked Stephen Lowry. The midfielder volleyed into the ground and into the net for the equaliser. 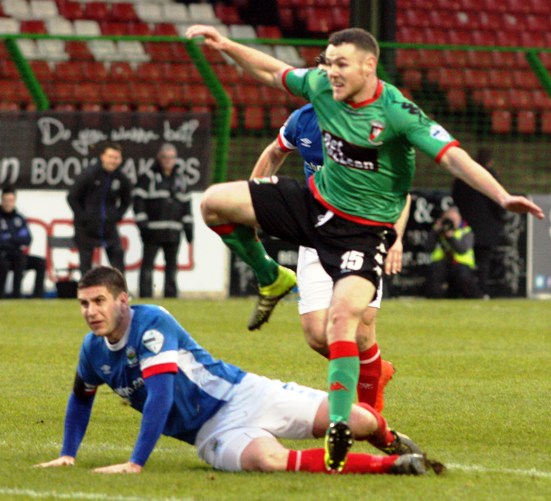 Glentoran reacted well to the goal and had another sustained period of play but as with the spell following Allen’s opener they were unable to really create anything of significance. Linfield continued to look dangerous and in truth more likely to score, Morris saved easily as Waterworth hooked goalwards after a nice Kirk Miller knock down and Aaron Burns should have done better when Gaynor picked him out from a free kick with only 15 minutes remaining. In the remainder of normal time Glentoran pushed for a winner, Jay Magee had a free kick deflected wide and Jonny Smith had another dead ball effort saved by Carroll but the game was destined for extra time. The visitors appealed for a penalty late on but Waterworth had gone down too easily and referee Hunter waved the appeal away. End of 90 minutes Glentoran 1-1 Linfield. 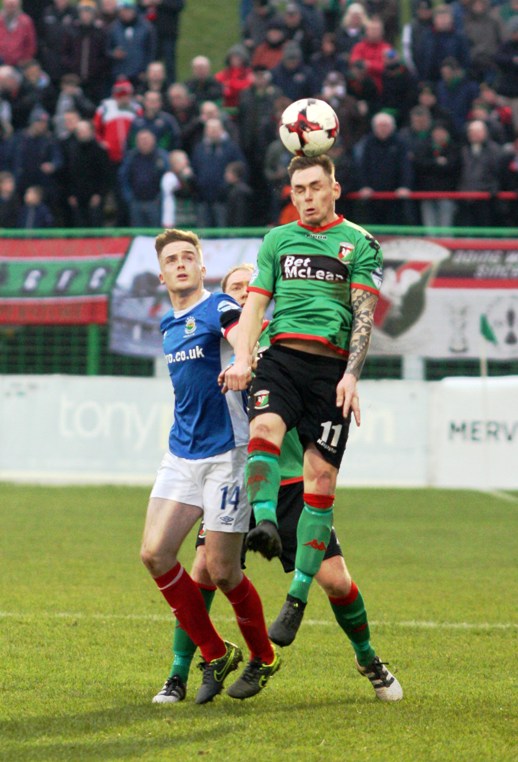 Extra time was delayed slightly whilst substitute Dwayne Nelson scaled the goalposts to fix a netting problem but unfortunately when it did get underway the visitors scored what would turn out be the winner. A long throw caused chaos in the Glentoran penalty area and Lowry cut the ball back for Waterworth who found the net. Glentoran immediately responded by bringing Stephen O’Flynn on but they could find the leveller, Chris Lavery smashed Glentoran’s best chance in extra time over the bar and Linfield always looked dangerous on the counter. Ross Gaynor had a drive saved by Morris and Jonny Addis kept the margin at 1 with a superb block when Lowry followed up on a great Morris save. The Glens threw men forward but the ball wouldn’t fall for them and it was the visitors who ultimately progressed. Full time Glentoran 1-2 Linfield. 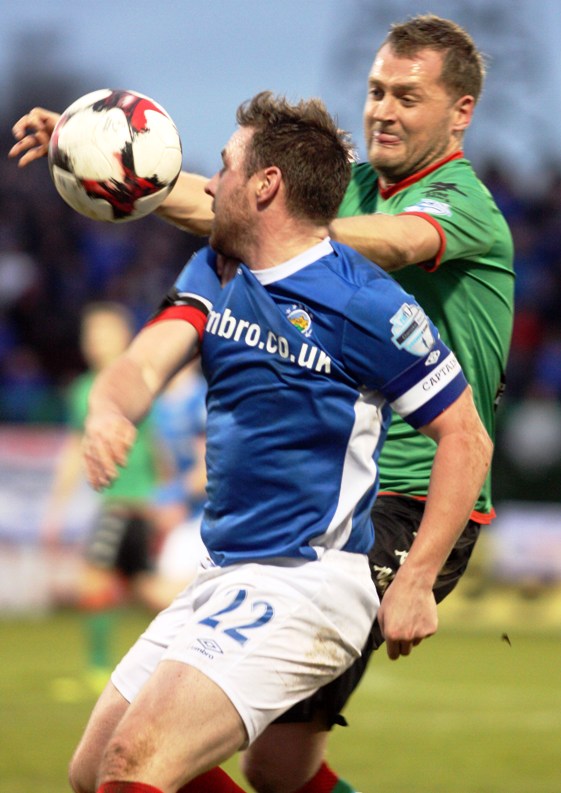 A bitter blow to Glentoran’s season but the layers need to pick themselves up and continue to work up the table, with the European playoff system in place the following weeks will be vital in defining the post-split period. The next fixture sees champions Crusaders visit The Oval on Saturday.