There was just one minue of the 90 remaining when Stephen Lowry's deflected shot went past Rory Brown in the Glentoran goal to earn the visitors a point. It keeps Coleraine in second spot in the Danske Bank Premiership table with just 3 games remaining.

With Marcus Kane out injured, the Glentoran defensive unit had to be reshuffled with Rhys Marshall at right-back, Paddy McClean wearing the captain's armband at left-back and Luke McCullough partnering Caolan Marron in the centre. There were starts too for Seanan Clucas and Andrew Mitchell. 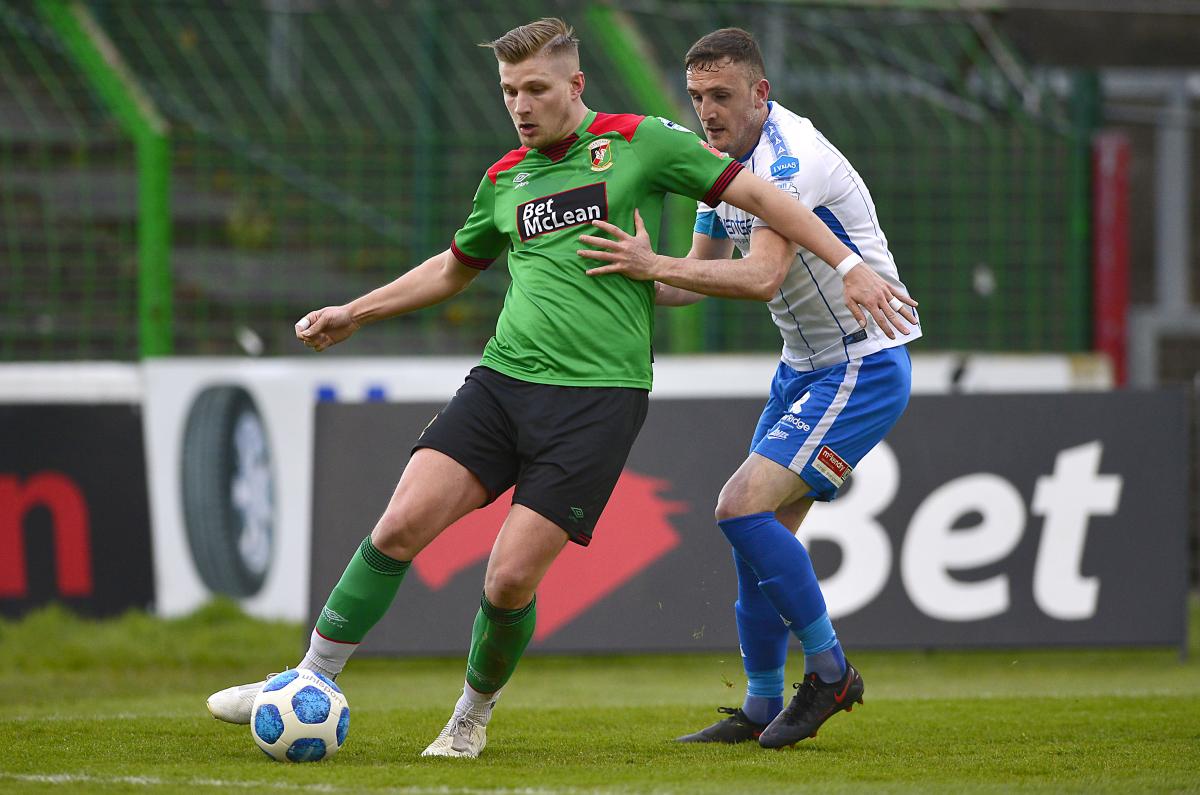 Chances were at a premium in a cagey first half with both keepers rarely tested. In the opening 20 minutes the only efforts of note were an Eoin Bradley 30-yard free kick which was well over the bar and then a chance for Andrew Mitchell who received the ball in the penalty area, turned and shot only to see the ball deflected wide. Ben Doherty tried his luck from 30 yards on 24 minutes but Rory Brown was right behind it and made a comfortable save. 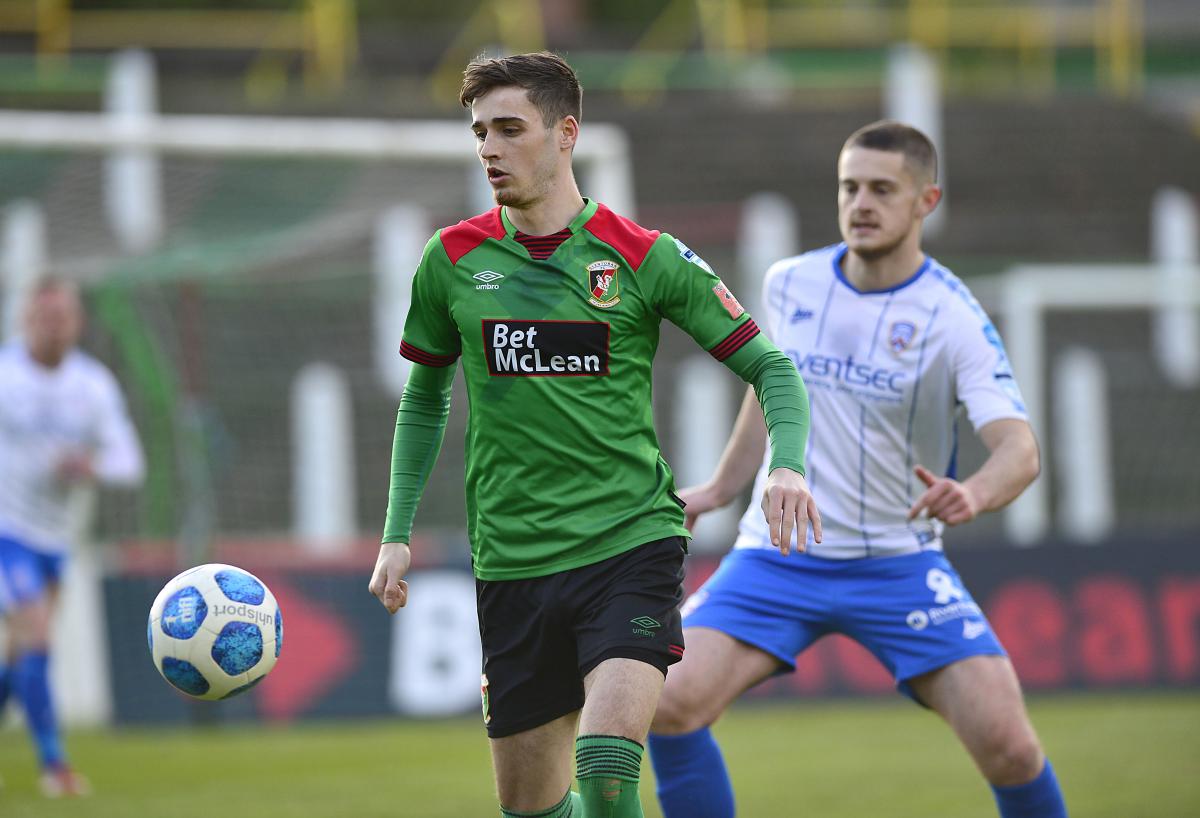 As the half wore on Glentoran began to dominate and create a few opportunities. Robbie McDaid headed over and then, following a great run, Rhys Marshall fired well wide of the target. Jay Donnelly also had a couple of half chances; a header which the Coleraine keeper gathered and then a shot wide of the post. As the interval approached, Gael Bigirimana found Andrew Mitchell who quickly laid the ball off to Robbie McDaid but Robbie's shot was wide of the mark. 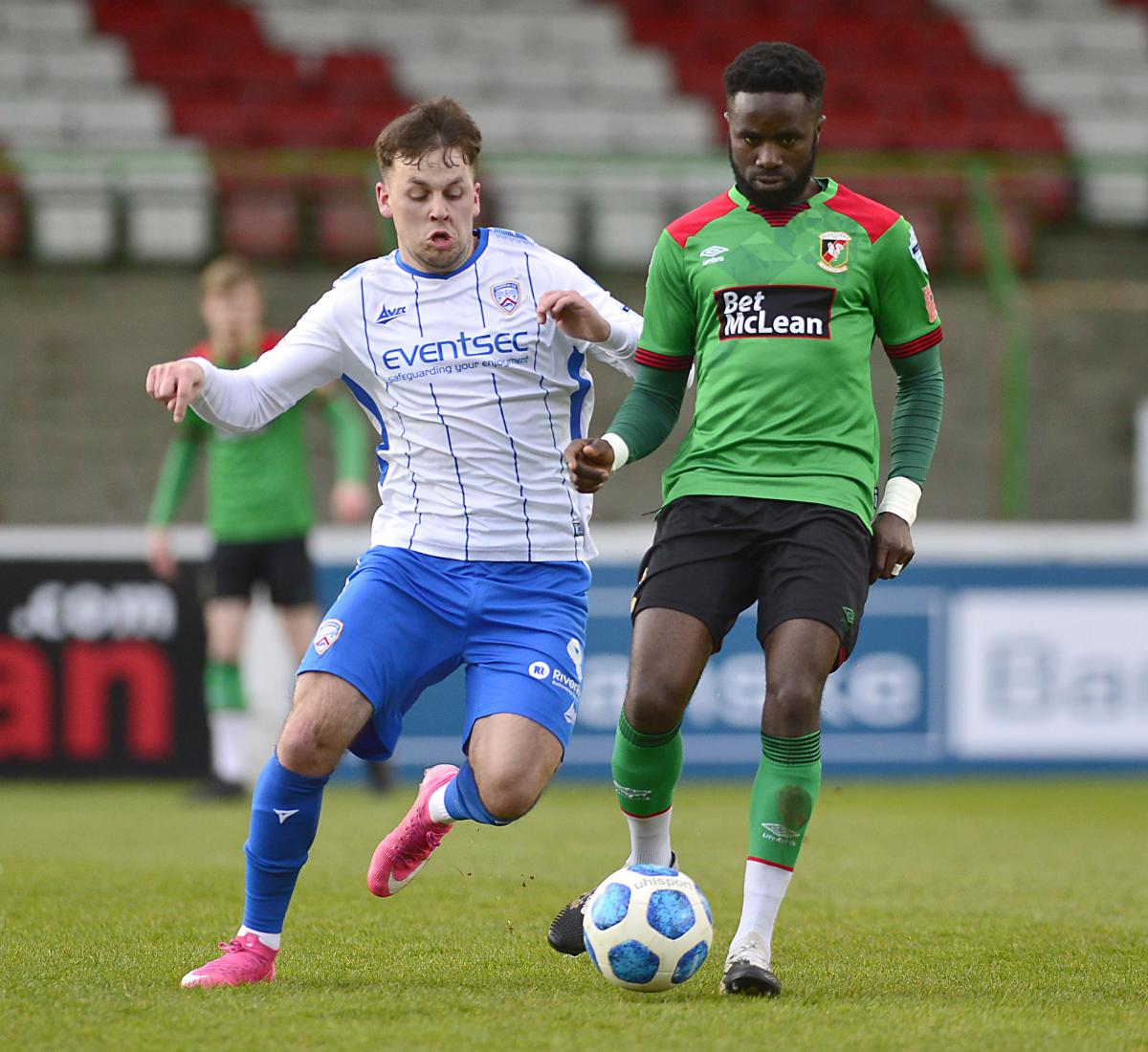 A quick throw in almost caught the visitors out in the opening minute of the second half. Paddy McClean found Robbie McDaid but his effort, from a tight angle, hit the side netting. Andrew Mitchell and Jay Donnelly were then both just off target as the Glens pressed, looking for the opening goal. On 65 minutes a reckless, late tackle from James McLaughlin on Paddy McClean brought the Glens nothing more than a free kick. Surprisingly McLaughlin whose tackle on Bobby Burns in an earlier meeting left the Glentoran player with a broken leg, saw neither red or even yellow on this occasion! 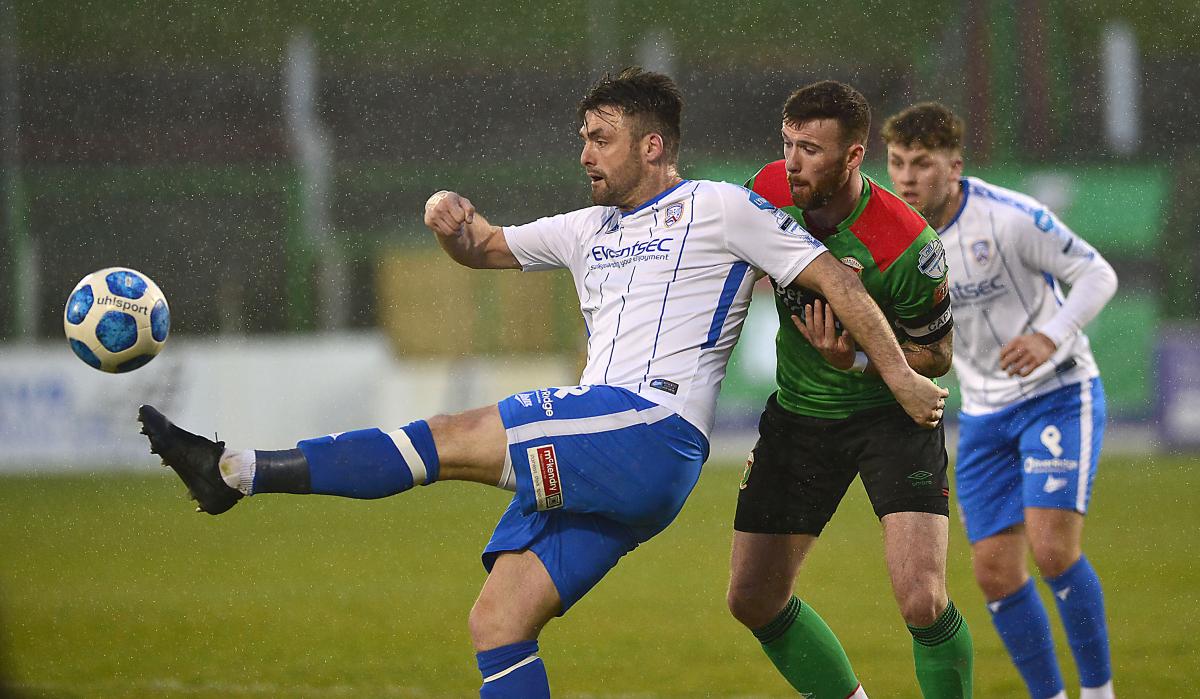 Midway through the half Rhys Marshall went agonizingly close when he cut in from the right, reached the edge of the 'D' before curling a delightful left footed shot inches wide of the far post. At the other end a break down the right from Lyndon Kane might have resulted in a goal for Eoin Bradley but from a timely interception from Rory Brown. Brown also did well to get behind a 25-yard effort from Ben Doherty. 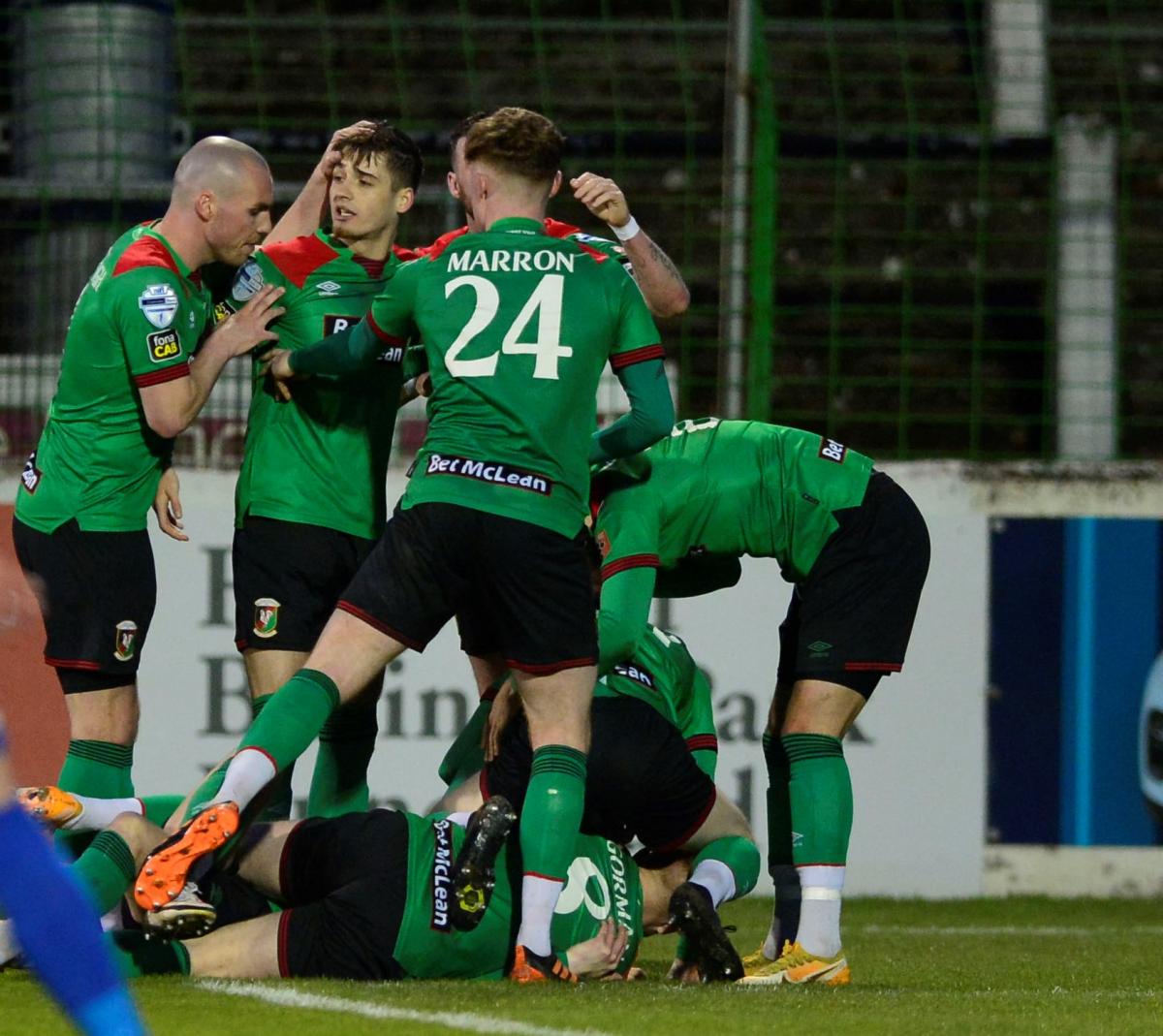 After substitute Ciaran O'Connor went close, Mick McDermott introduced Dale Gorman for Seanan Clucas. Gorman's first involvement was to take a free kick around 35 yards from goal. He played the ball into the area and Rory Donnelly rose to head home from around 12 yards out. Advantage Glentoran. Another foul on Gorman 4 minutes from time gave the midfielder another set piece opportunity. He struck the ball powerfully and was really unfortunate to see it crash off the crossbar. 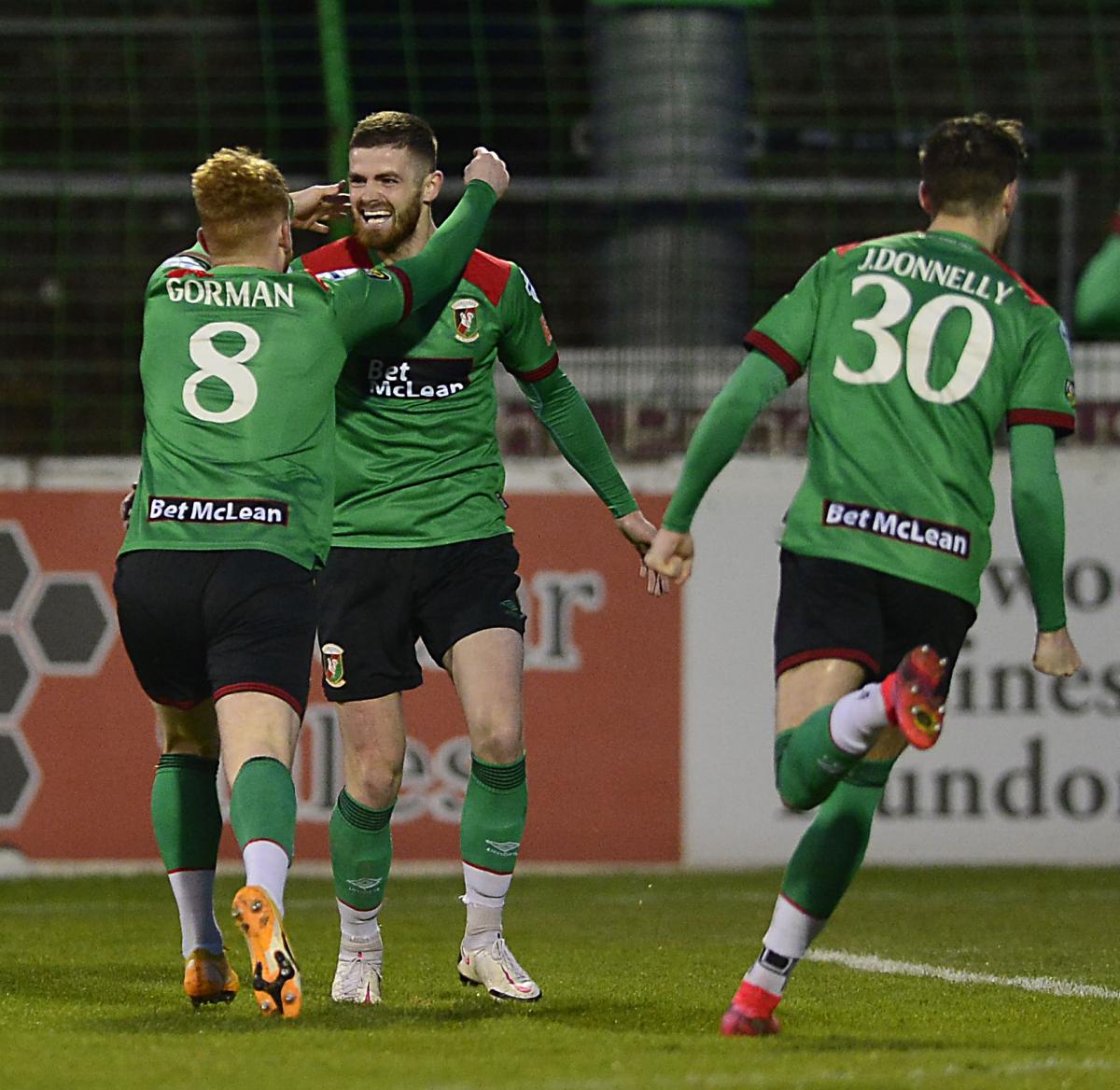 In the final minute a hopeful punt into the Glentoran box wasn't properly dealt with and broke kindly for Stephen Lowry. His shot took a big deflection off a Glentoran defender giving Rory Brown no chance. So Coleraine remain in second place with 3 games to play. Next up for the Glens is an Irish Cup tie at the Oval against Cliftonville on Saturday (kick-off 5:30pm). 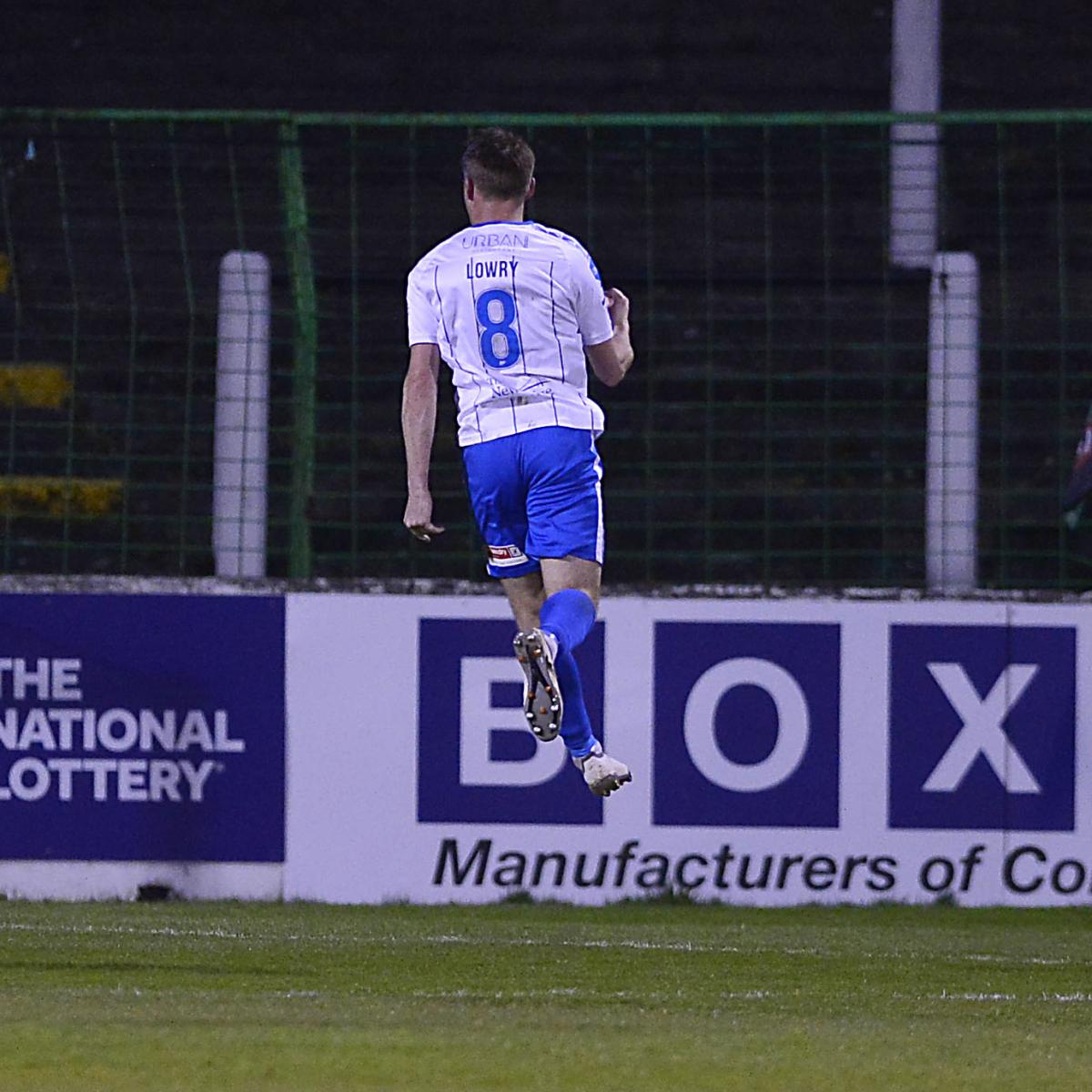 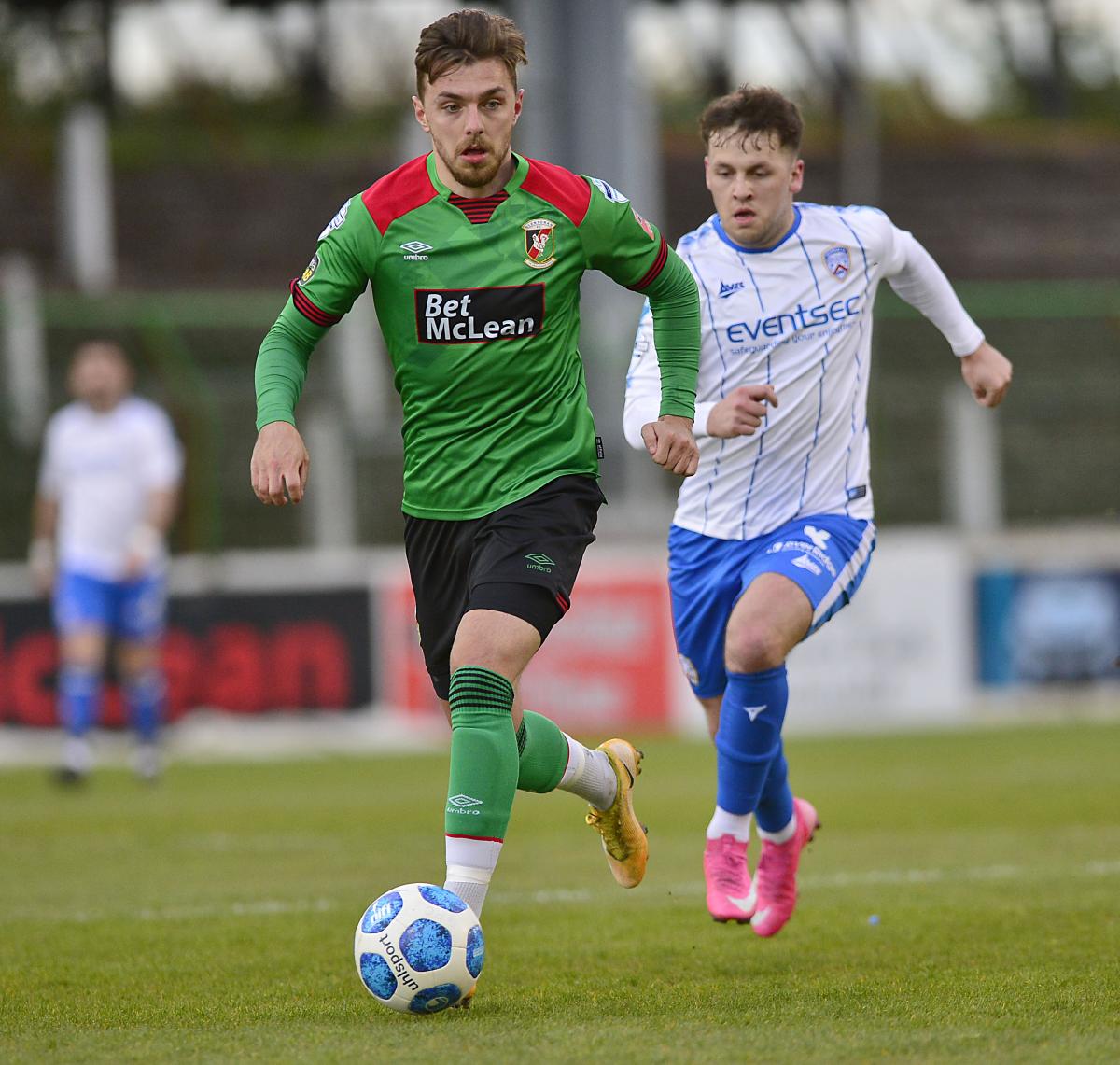