A second half header from substitute Marcus Kane sent Glentoran through to their first Irish Cup final for seven years at a sunny Windsor Park this afternoon. 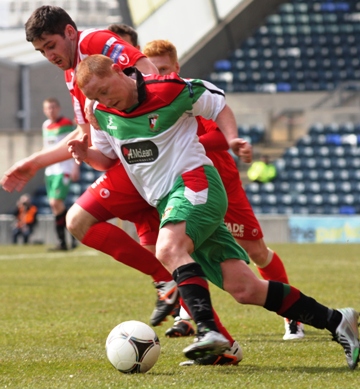 after a typically powerful run.  On fifteen minutes Portadown’s Sean Mackle fired just over from twenty yards and a couple of minutes later Mark Clarke thumped a similar effort just over after a neat lay off from Stephen McAlorum.  For a long period there was little to trouble either goalkeeper until, on thirty six minutes, a spell of Glens’ pressure saw Jay Magee head a good chance just wide of the post while Stephen Carson had a low drive from the edge of the box well saved by David Miskelly with his legs.

Portadown came out for the second half on the front foot and should have taken the lead after fifty three minutes.  Mark Clarke’s attempted back pass fell well short of Elliott Morris and left Darren Murray clear on goal.  The Portadown number nine elected to lob Morris and the ball looked to be heading into the net, but it didn’t carry enough pace and Jay Magee was able to get back to head clear.  Andy Waterworth’s speed was causing Portadown problems in the wide areas and after getting the better of Chris Casement he sent a low cross in from the left which just failed to get a touch from David Howland.  However Portadown still looked the more likely scorers with Mackle shooting just over the bar, and he was involved a gain when his neat dummy gave Portadown captain Kevin Braniff a chance to shoot from the edge of the box and Morris had to be alert to save with his legs. 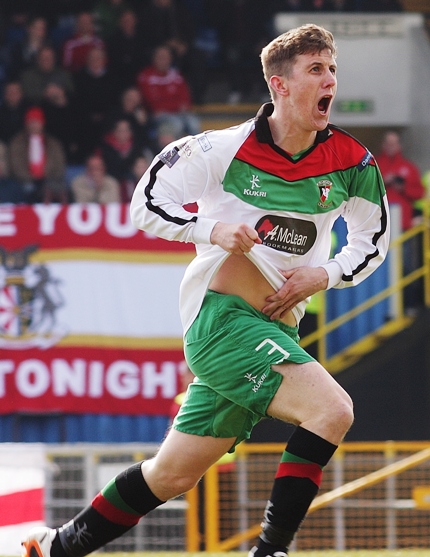 With fifteen minutes left Eddie Patterson replaced Stephen Carson with Marcus Kane and what a substitution it proved to be.  Three minutes later the Glens won a corner on the left after some superb work by McAlorum and the ball was swung in by Richard Clarke.  Kane got his head to it in a crowded six yard box and found the bottom corner to give his side a precious lead.  Throughout the game it had looked as though only one goal would be enough to win it and that proved to be the case as the Glens saw out the remaining time with some ease against a deflated Portadown.

Referee Raymond Crangle’s final whistle sparked major celebrations in the North Stand as the fans already started to look forward to a big day out in May.  And the icing on the semi final cake came when Cliftonville’s victory in the other tie meant that we are now guaranteed Europa League football next season.