The already slim chances of Glentoran qualifying for Europe were unceremoniously eradicated on Saturday after they put in an embarrassing and lacklustre performance against a Glenavon side that didn't feature a number of key players in anticipation of their Irish Cup semi-final in a weeks time.

Contrastingly the Glens fielded their strongest possible team, with only Elliott Morris missing out after being injured in the warm-up to be replaced by Aaron Hogg, as they looked to bounce back from a midweek loss at Seaview. Mathematically finishing third was not and still is not impossible meaning that Eddie Patterson favoured the established first-teamers to a more youthful look as the focus now shifts to next season.

Tha game kicked off and the home side were on the front foot, though Tiarnan Mulvenna did trouble Hogg with an acrobatic overhead kick on six minutes. Three corners in quick succession yielded absolutely nothing for Glentoran, though Jonny Addis did threaten the Lurgan Blues with a number of skilful runs forward from left back however on no occasion could the utility player get a shot off.

On 13 minutes Glenavon almost went in front as Mulvenna brought a super save out of Hogg; the big 'keeper reacting excellently to the striker's fierce drive from the edge of the box. Six minutes later and referee Andrew Davey was at the centre of a controversial decision as Niall Henderson drove forward against his old club, played a one-two with Curtis Allen and was scythed down about a yard inside the penalty area. Davey however awarded a free-kick on the edge of the area much to the anger of the home supporters. The free-kick almost saw the Glens take the lead but Willie Garrett sliced well over after Stephen McAlorum had found him from the set-piece.

With twenty minutes gone Fra McCaffery fired one effort just wide from the edge of the area before lobbing another inches over the Glenavon crossbar. On the half-hour mark the Glens really should've went in front; Jim O'Hanlon latched on to a loose ball inside the box, rounded Glenavon 'keeper Sean McIlhome and seemed caught in two minds, allowing the defenders to get back and block his eventual shot off the line.

As the game neared the interval Mulvenna again troubled Hogg with a powerful drive forcing the Glens' shot-stopper into a super save, tipping it just wide. Unfortunately the half ended on a sour note for the home side with Willie Garrett limping off to be replaced by Mark Clarke, who slotted in to central defence. 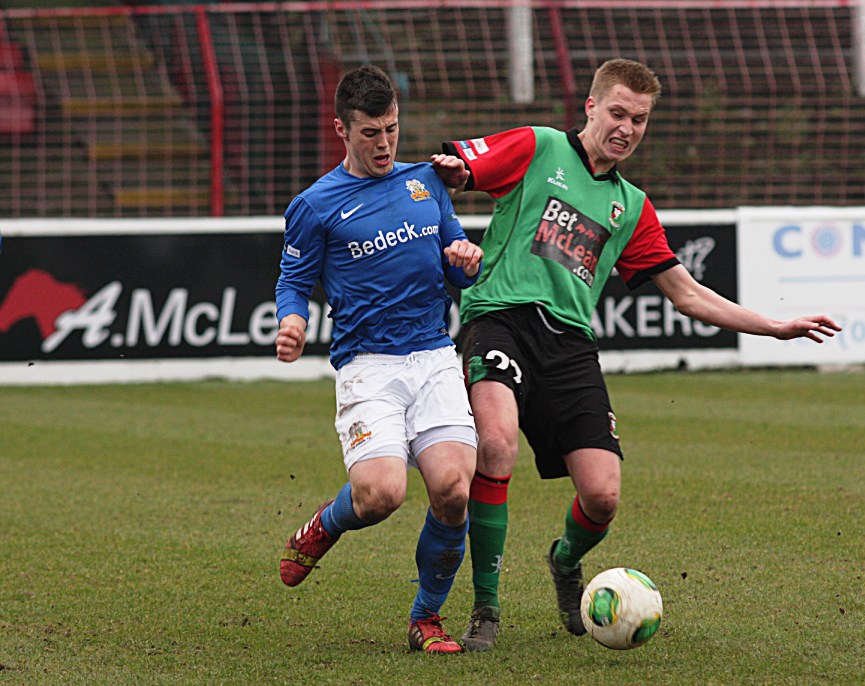 The first half was a largely equal affair, but the second was totally one-sided as Glentoran put in arguably their worst performance of the entire season with Glenavon running riot and the east Belfast outfit barely responding at all.

On 52 minutes Glenavon were awarded a penalty. Mulvenna was unnecessarily brought down by Clarke inside the box with Davey pointing to the spot, and the striker picked himself up to take the responsibility and blasted into the bottom corner giving Hogg no chance. The Glens almost replied immediately as Henderson drilled an effort just wide from the edge of the box, and then on 63 minutes Curtis Allen curled a free-kick into the side-netting.

Just five minutes after Allen's miss and the Lurgan Blues were 2-0 ahead as Mark Patton raced past Clarke, rounded Hogg and slipped home; Kevin Bradley getting back but opting not to slide and try to avert the second goal. It was now all Glenavon as their youthful team complimented by old experience made a mockery of the current Irish Cup holders and on 81 minutes substitute and teenager Andrew Hoey scored his first goal in senior football on his Irish League debut with an excellent turn and placed finish beyond the reach of Hogg.

With five minutes left Glentoran substitute Danny McKee fluffed his lines from two yards with an empty net in front of him as the big number 5 missed the ball completely with the goal at his mercy. Following that opportunity Allen and McCaffery both had efforts either side of a Patton lob that was inches wide of making it 4-0, though neither troubled McIlhome in the Sydenham End goal.

Glenavon compounded the home side's misery in injury time with a fourth goal from another teenage debutant Owen McKeown who exploited a glaring lack of pace in the defence of the home side, racing through almost unchallenged, before calmly lofting it over Hogg and into the empty net. 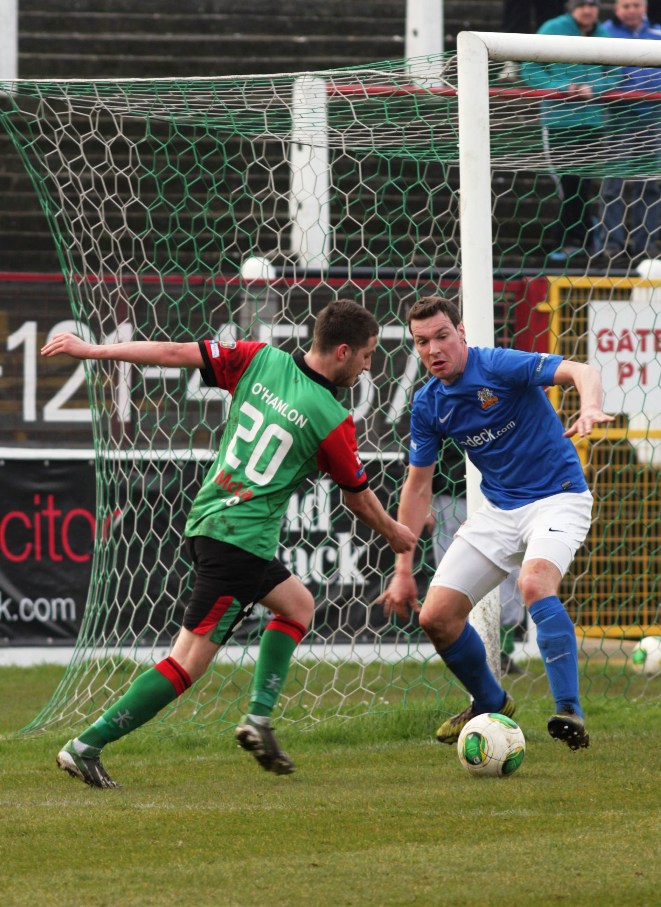 A diabolical performance then from Glentoran against an under strength away side. With no game next week because of the Irish Cup semi-finals, the Glens return to action in a fortnight's time as Cliftonville present a daunting task at Solitude on Saturday 12th April (3:00pm kick off). 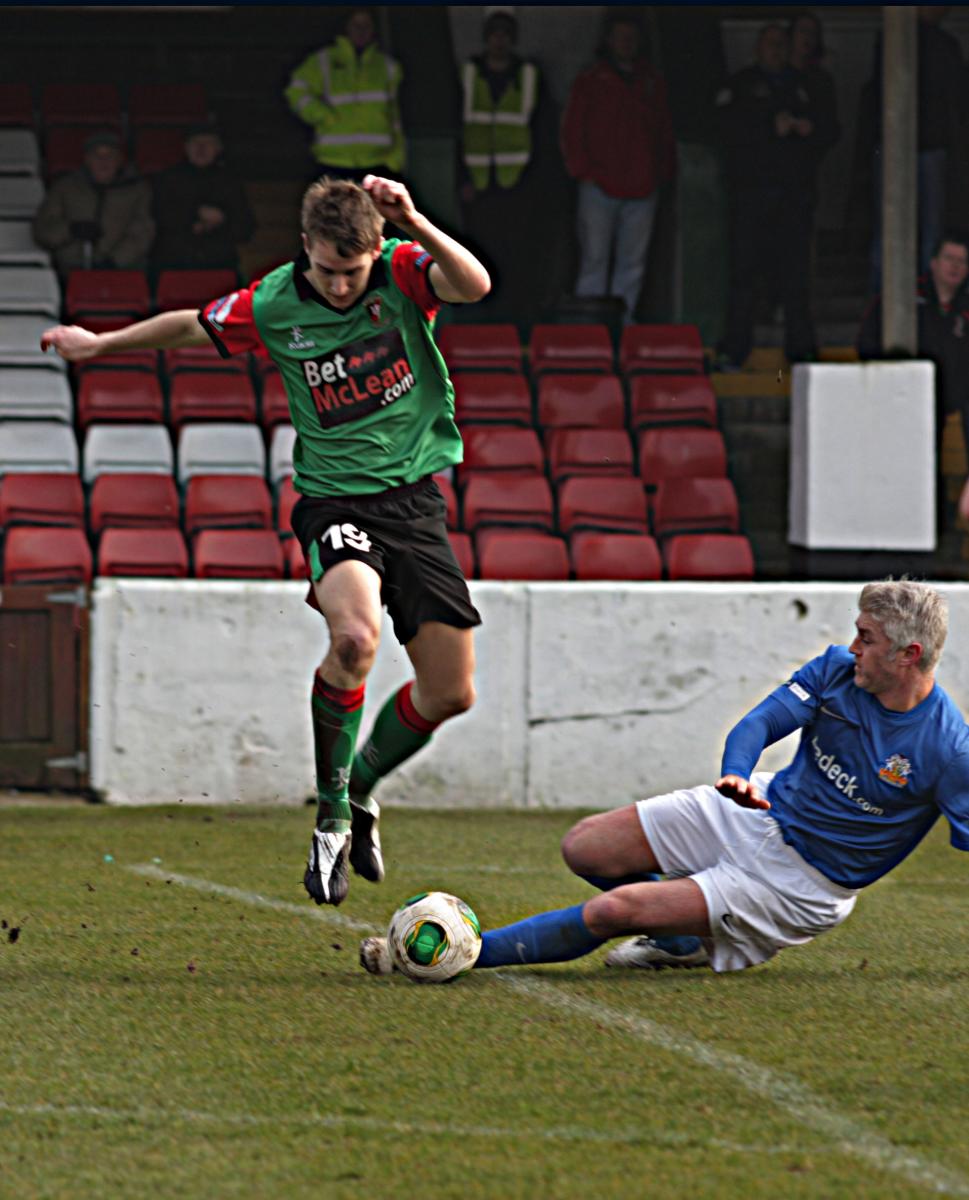 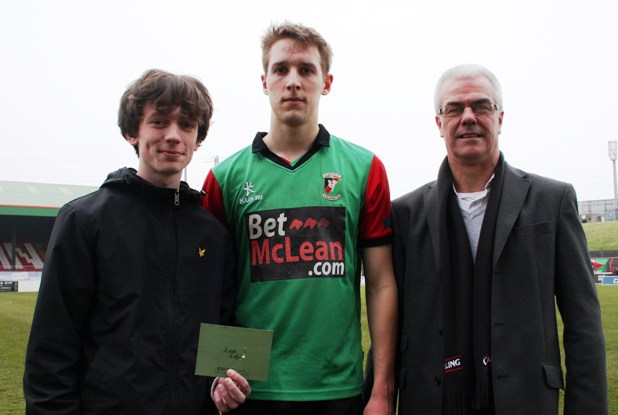