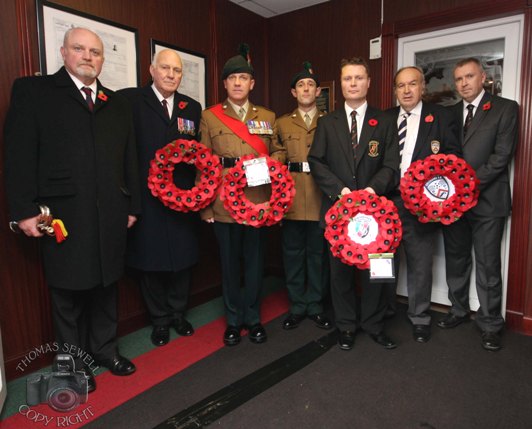 Glentoran and Coleraine paid their respects to those to paid the ultimate sacrifice before kick off at The Oval for today's Danske Bank Premiership clash. Poppies had been cut into the Oval grass and at the blow of the referee's whistle, both teams and supporters impecably observed a one minutes silence in memory of those who fought and died for their country.

Glentoran made one forced change in today's squad with Steven Gordon missing out due to a long standing back injury, he was replaced by the returning Tiarnan McAuley. McAuley played his normal right back position with Calum Birney returning to a more comfortable central role pushing Jonny Addis into midfield alongside Eric Foley in Gordon's absense. Coleraine sat six points clear of Glentoran and with reasonable form to their name as well as a comfortable victory over Glentoran earlier in the season, the Bannsiders were undoubtedly confident of their chances. Oran Kearney's side fielded an impressive seven players under the age of the 21 in their starting line-up. 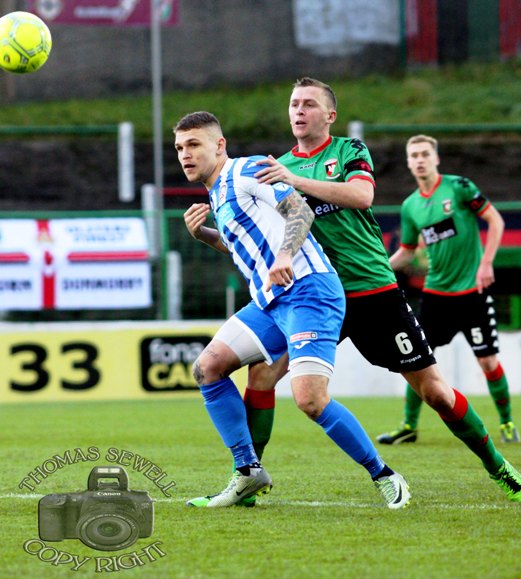 It was Coleraine who started brighter as well with Jordan Allen having the first big chance of the game on the 3rd minute. He was fed by Brad Lyons on the right hand side of the Glentoran box and fired at Elliott Morris who saved despite being wrong-footed on his dive. The first half struggled to produce many opportunities as Glentoran were comfortable at the back but lacked options up front. Gary Haveron's side have tightened up defensively since the former Carrick boss arrived at The Oval and today seemed to start in a similar vein however the lack of attacking flair left Curtis Allen very exposed. Ross Redman delivered a number of good crosses into the box but with only Allen and occasionally Caldwell to support in the box, Glentoran rarely looked like threatening. 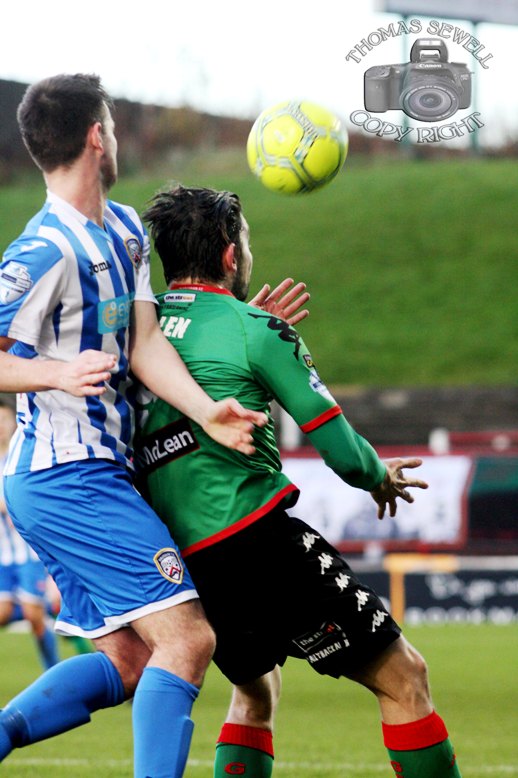 Curtis Allen fired Glentoran's first shot at goal on the 25th minute but it was weak and comfortably saved by Chris Johns in the Coleraine goal. As the half went on Coleraine started to grow in stature, on the 37th minute a cross-shot flashed a big warning to the Glentoran's defence as it sailed dangerously close to the far post. Morris was called into another save from a deflected header just minutes later causing confusion for the Glens keeper who batted the ball away on the line. The Glens keeper saved his best for the last phase of the half, a header from Mullan was drilled at the Glens goal but an incredible reaction stop from Morris saw him tip the ball over the ball. A huge let off for the Glens who survived 0-0 at half time. 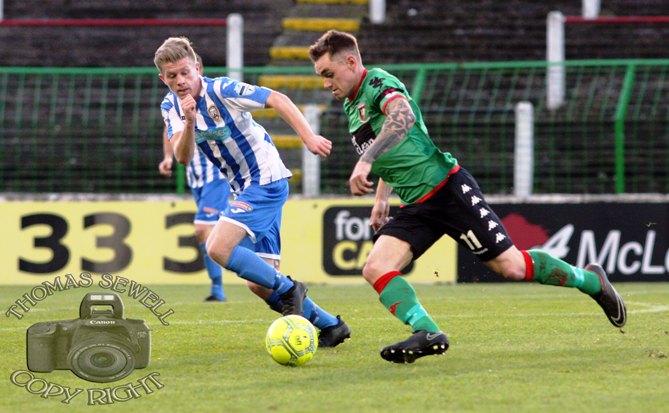 Glentoran needed to improve in the second half having been lucky to hang on to a first half stalemate but it did not last long in the second period with Coleraine taking the goal they deserved on the 48th minute. A good piece of play from Darren McAuley and a great run from Jamie McGonigle saw the Coleraine duo break through the Glentoran defence too easily with McGonigle going through on goal and finishing well into the bottom left hand corner. 1-0 Coleraine.

Elliott Morris was clearly Glentoran's man of the match as in the second half he continued to keep Glentoran in touch in the game. He saved again on 50th minute  and another good chance from Coleraine flashed wide on 55. Calum Birney's mistake with a poor backward header let Coleraine in again but Morris saved and the deflection off the Glens keeper went narrowly wide. Glentoran offered a half chance from Chris Lavery when he shot from a tight angle high and wide but in truth it wasn't much of an opportunity. On 74, Morris again saved from a well struck Coleraine free kick. 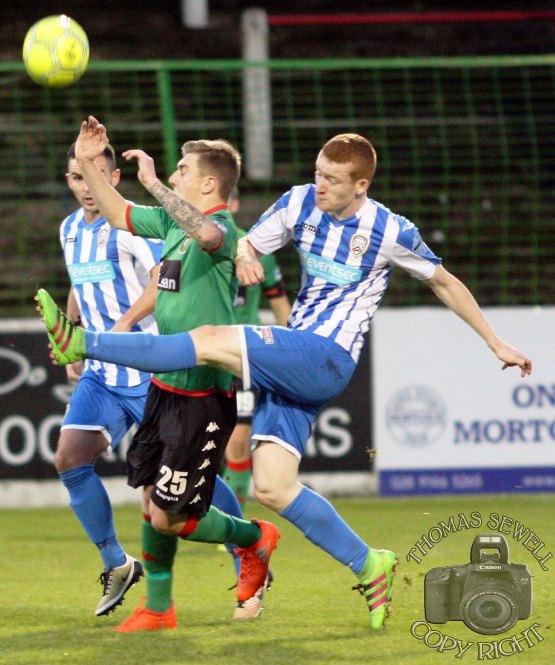 Glentoran's biggest positive from the day was the returning Stephen McAlorum after 12 months out with a horrific injury. He marked his return in true McAlorum fashion with a yellow card within two minutes of entering the pitch! His work rate and physicality has been much missed in midfield and is a welcome return for Gary Haveron with so many injuries in the current squad.

Glentoran offered their biggest chance of the game on 76th minute, Chris Lavery again it fell to from the left hand side as he flashed a well struck shot just wide of the far post. The game ended almost comically for Coleraine who must have been amazed not to add a second on the 86th minute as the ball pinballed around the six yard box with Morris out of the goal but somehow Glentoran scrambled a clearance. Eric Foley's good delivery on 88th minute was missed by Curtis Allen at back post in what would have been a daylight robbery equaliser. Not to be for Glentoran who were deservedly beaten by a much sharper Coleraine side. 1-0 full time and Glentoran's first defeat in six and first for Haveron since his opening game against Linfield.