Glentoran's suffered a first home league defeat of the season this afternoon at the Bet McLean Oval; Ryan Curran's 8th minute strike deciding this Danske Bank Premiership match. The result sees the Glens drop to third in the table although they have played fewer games than the top two. 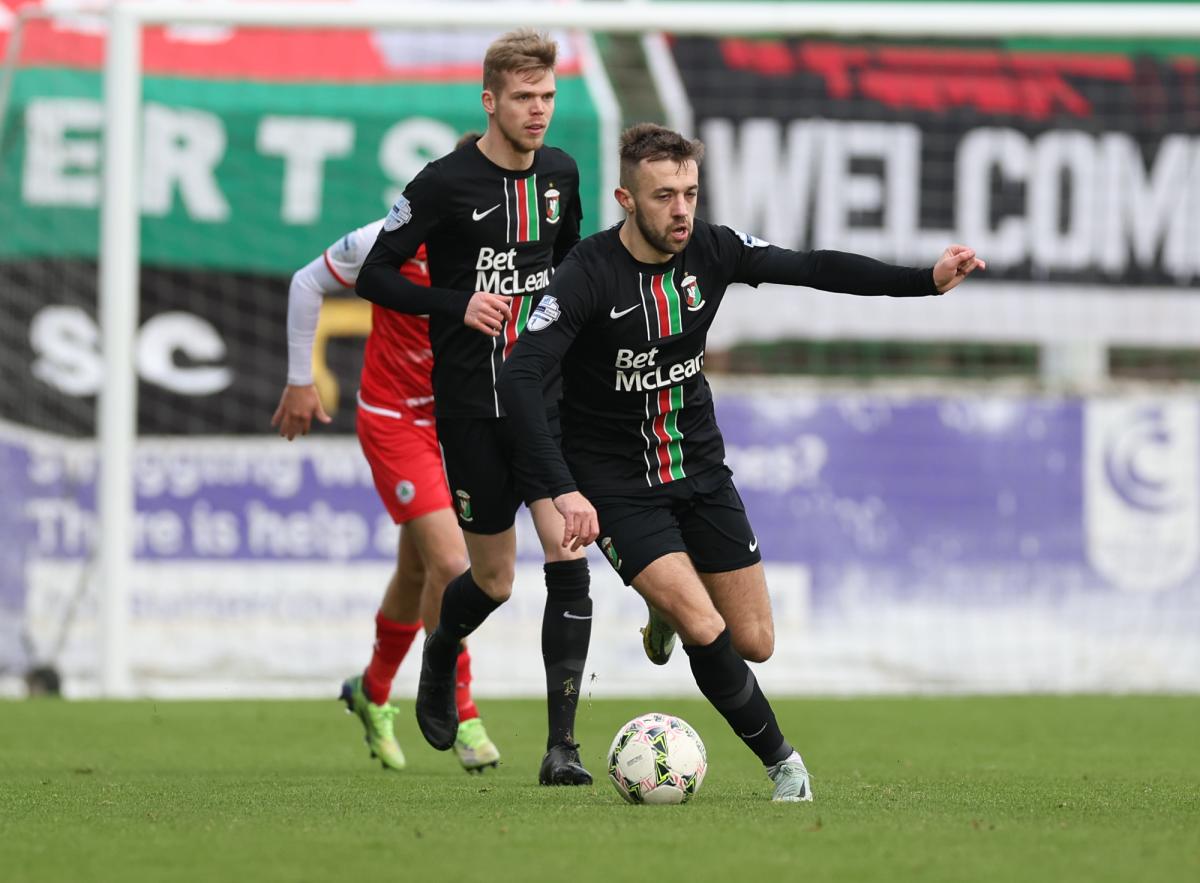 There was a surprise in the starting line up with Conor McMenamin deemed fit to start. Paddy McClean also was in the team following his recent suspension.

With 5 minutes played Hrvoje Plum found Jay Donnelly on the left but his cross towards Marcus Kane was cut out by Jonny Addis. Moments later Jay Donnelly was back on the attack taking the ball to the by-line before firing low across goal. Unfortunately there was no Glentoran player able to get on the end of it. 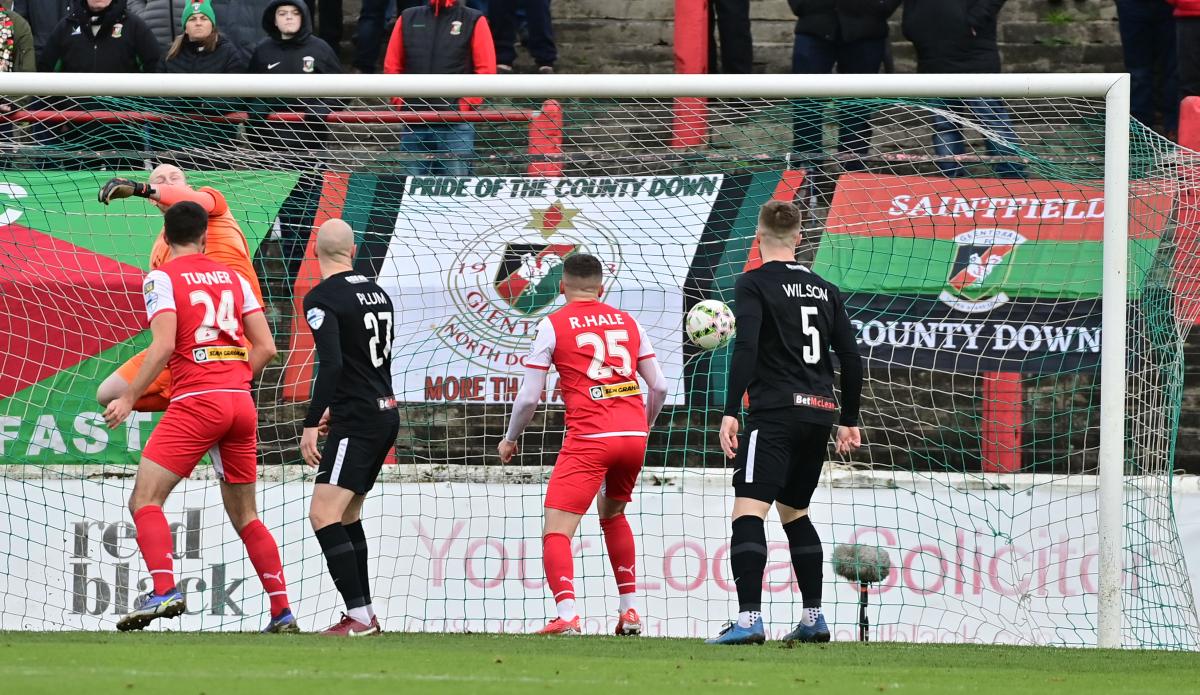 Cliftonville went in front on 8 minutes. A poor clearance by Paddy McClean gave possession back to the Reds. The ball was played to Joe Gormley but Glens skipper, Marcus Kane got in a vital tackle, conceding a corner. From the set play the ball found Ryan Curran close to the penalty spot with no defender within 5 yards of him. Curran caught the ball perfectly on the volley and it flew past a helpless Aaron McCarey. On 18 minutes the visitors might have doubled their advantage when Ronan Hale had his effort blocked and then in the follow up Ronan Doherty saw his attempt tipped over the bar by McCarey. 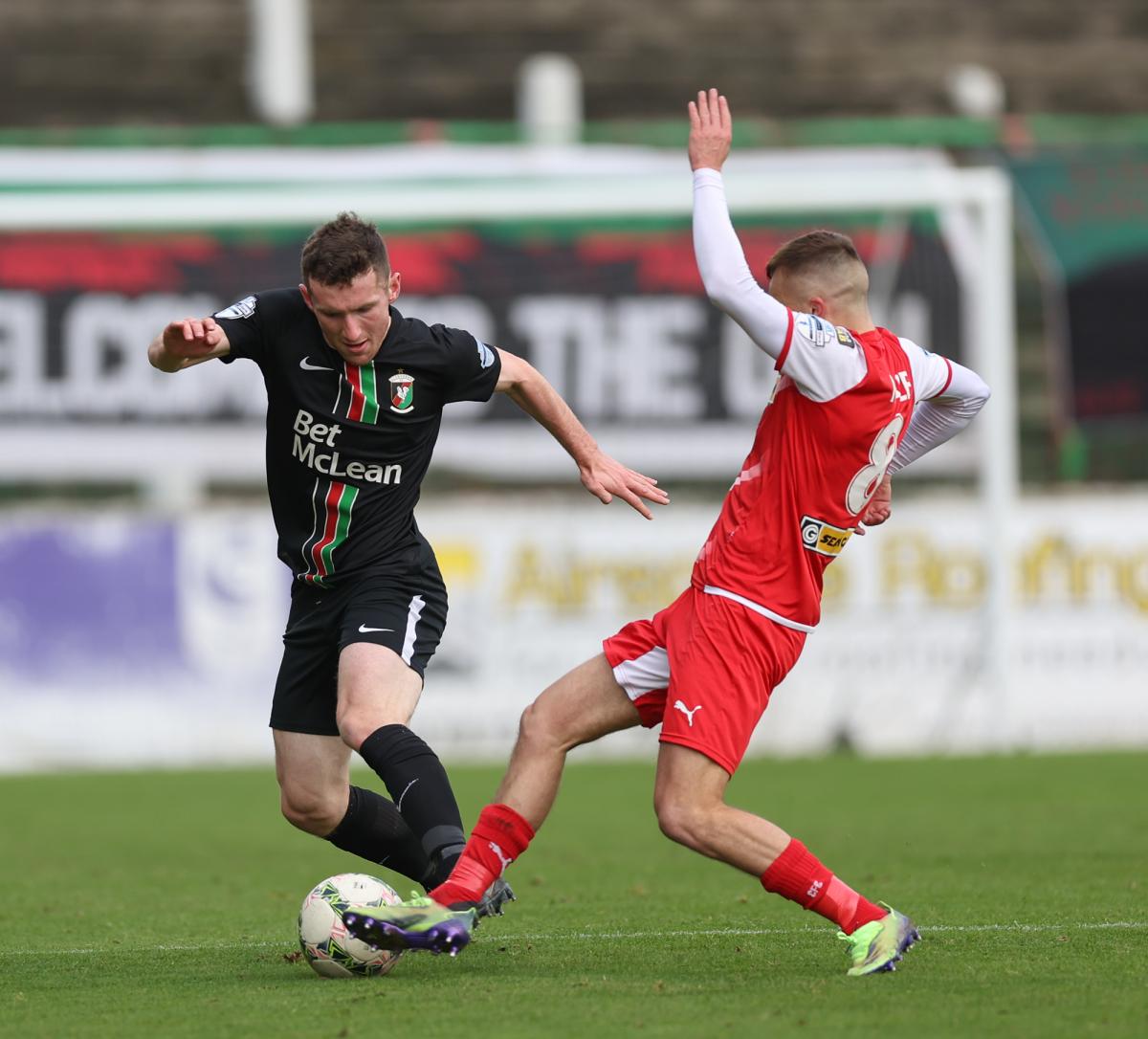 By the midway point of the half Glentoran had lost both Hrvoje Plum and Conor McMenamin to injury. Then on 25 minutes Rory Donnelly forced Nathan Gartside into a decent save however the ball was then played out to Shay McCartan on the left and he stormed into the area before firing a low drive past the keeper. The ball looked to be going in but Jay Donnelly made sure.... only to see the flag raised to indicate the Glentoran number 9 was in an offside position. Just after the half hour mark a 30-yard free kick from Ronan Hale was narrowly over the crossbar but perhaps the best opportunity for Cliftonville to increase their lead came when they broke down the left and Turner's cross found an unmarked Rory Hale in the area but he failed to hit the target. 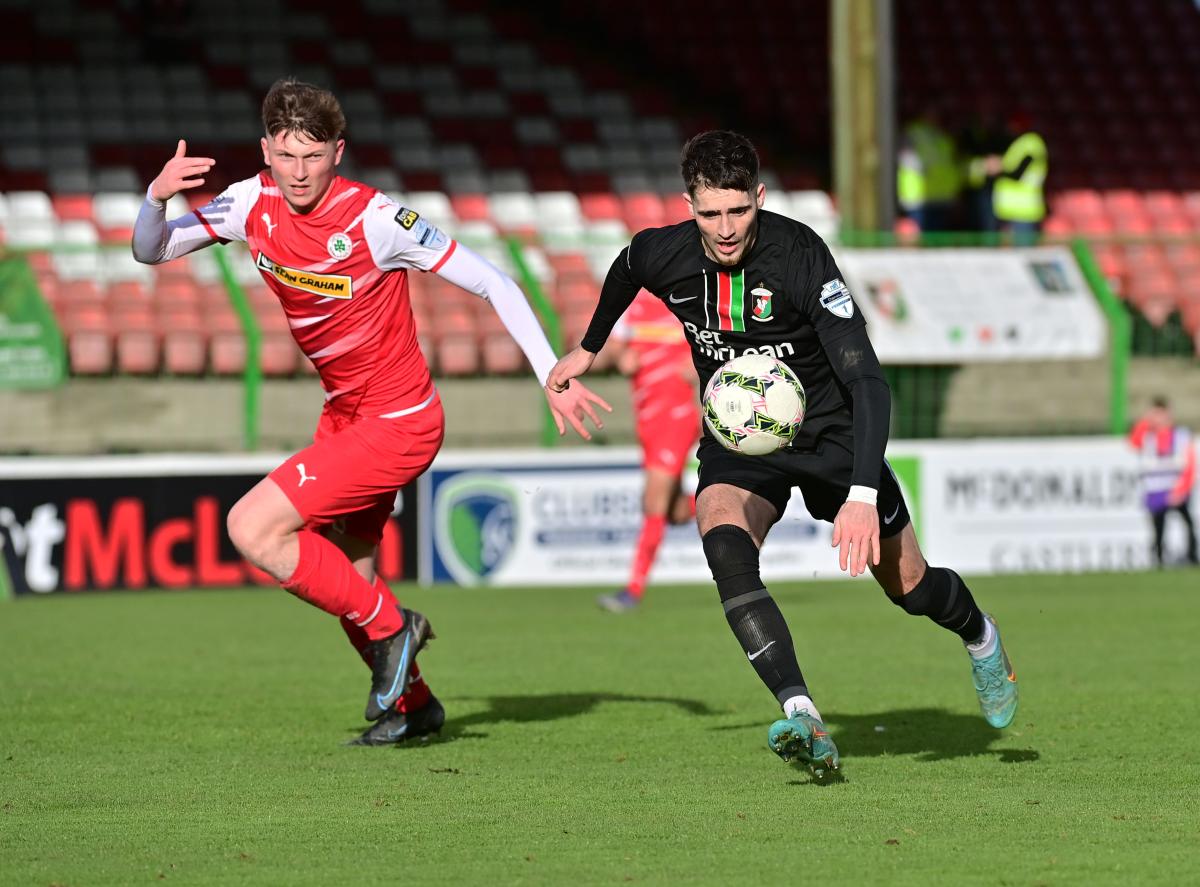 More slack play by the home side in their own half presented another great chance for the Reds as we approached halftime but Ronan Hale dragged his shot right across goal and wide of the far post. The Glens might have grabbed an equaliser on 44 minutes when Jay Donnelly robbed the ball off Jamie Robinson and went 1 v 1 with Gartside; the Reds keeper saving with his legs.

The second half was a much more cagey affair and it took until the 52nd minute before we'd the first opportunity; Shay McCartan's long range free kick being saved by Gartside at the second attempt. Just past the hour mark Cliftonville almost grabbed a second. Hesitant play at the back saw the home side fail to clear the ball and Ronan Doherty's shot from the edge of the area hit the underside of the crossbar before being grabbed by Aaron McCarey. Ronan Hale then had another chance but shot straight at the Glentoran keeper. 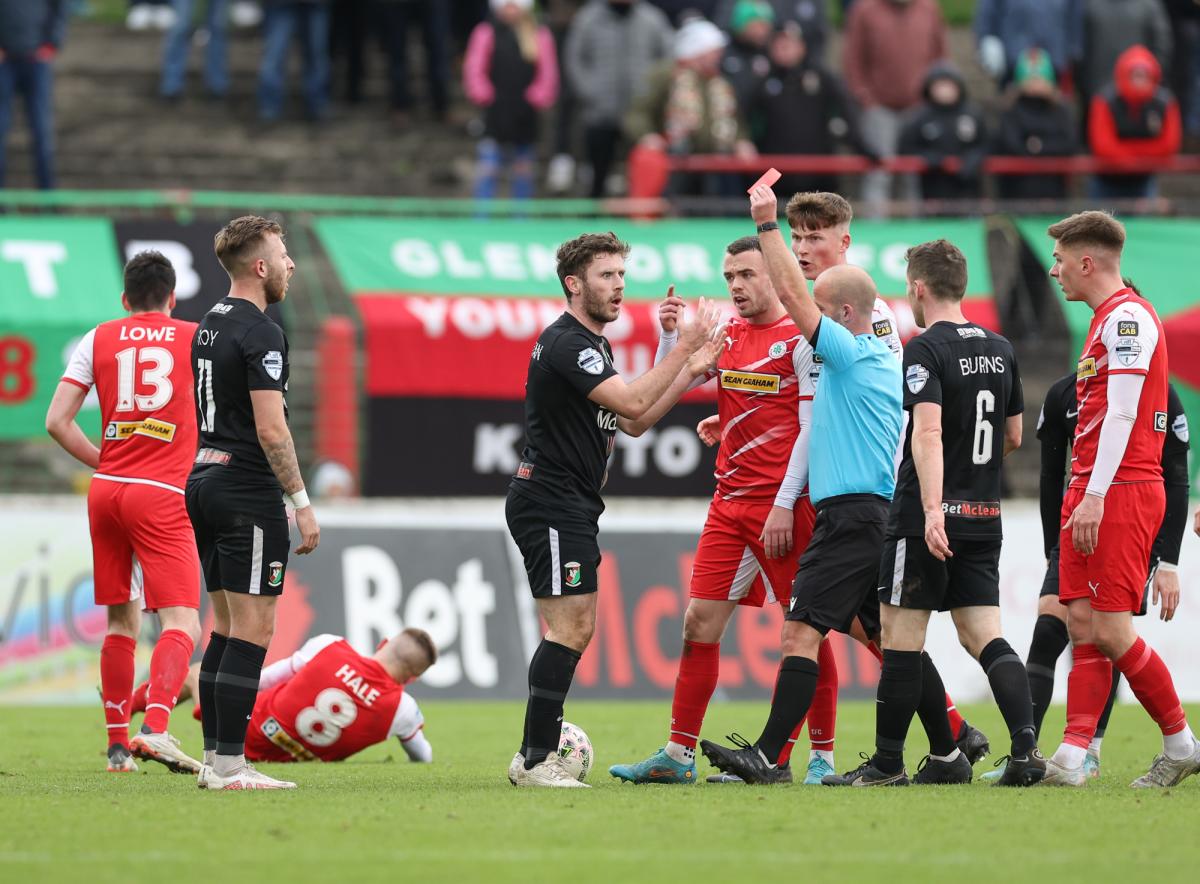 On 73 minutes Glentoran were reduced to 10 men. Shay McCartan caught Rory Hale with his trailing leg and referee Tavinder was quick to produce a red card. It was a foul and it was probably a yellow card but a red seemed very harsh, particularly when compared to some of the tackles we've witnessed against us in many games this season!

With 10 minutes remaining the Glens almost levelled things up. A long ball forward was headed on by Jay Donnelly and Marcus Kane's attempted overhead kick was inches wide of the post.
There was one more great chance for the 10-man Glentoran to take a share of the points. Marcus Kane fired in a fantastic cross from the left but Terry Devlin, free at the back post, couldn't hit the target with his header. 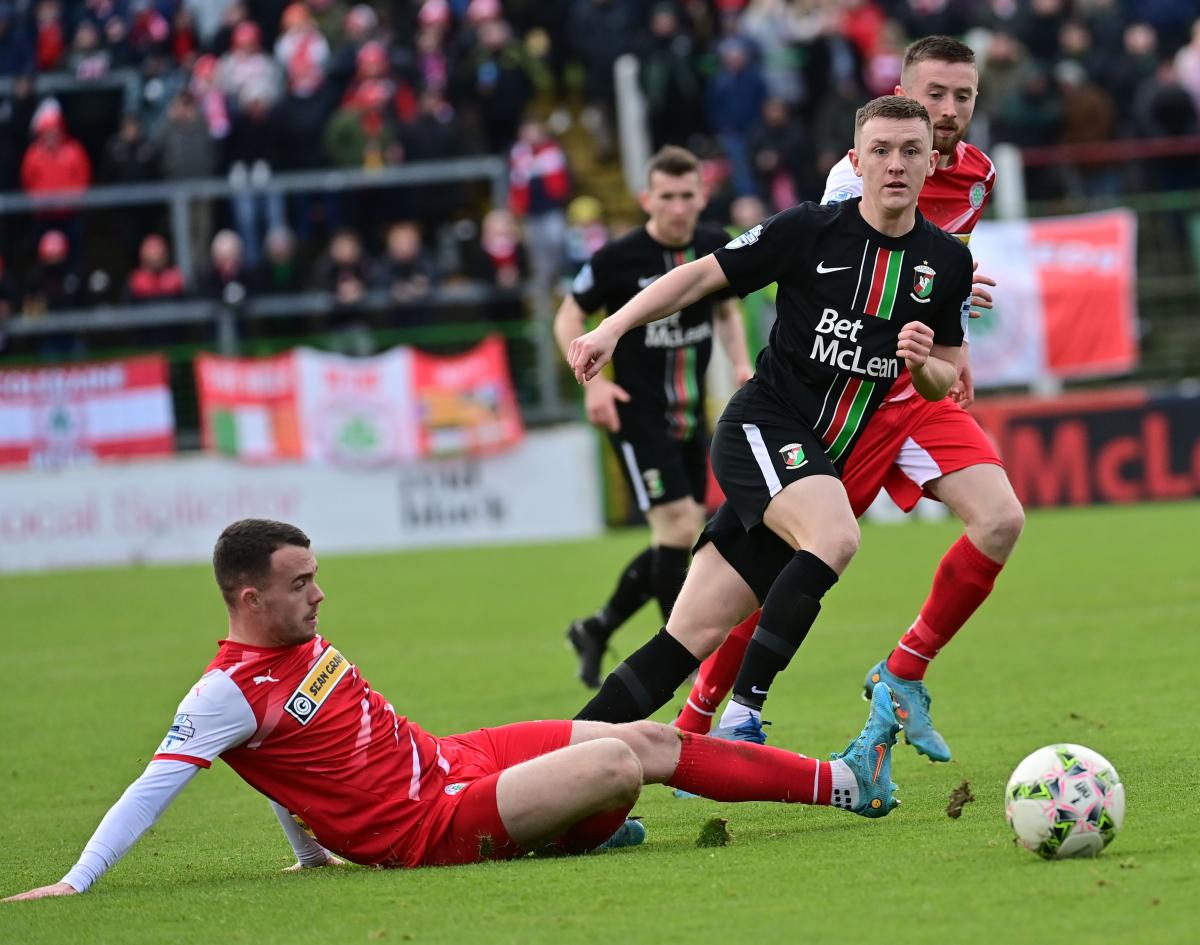 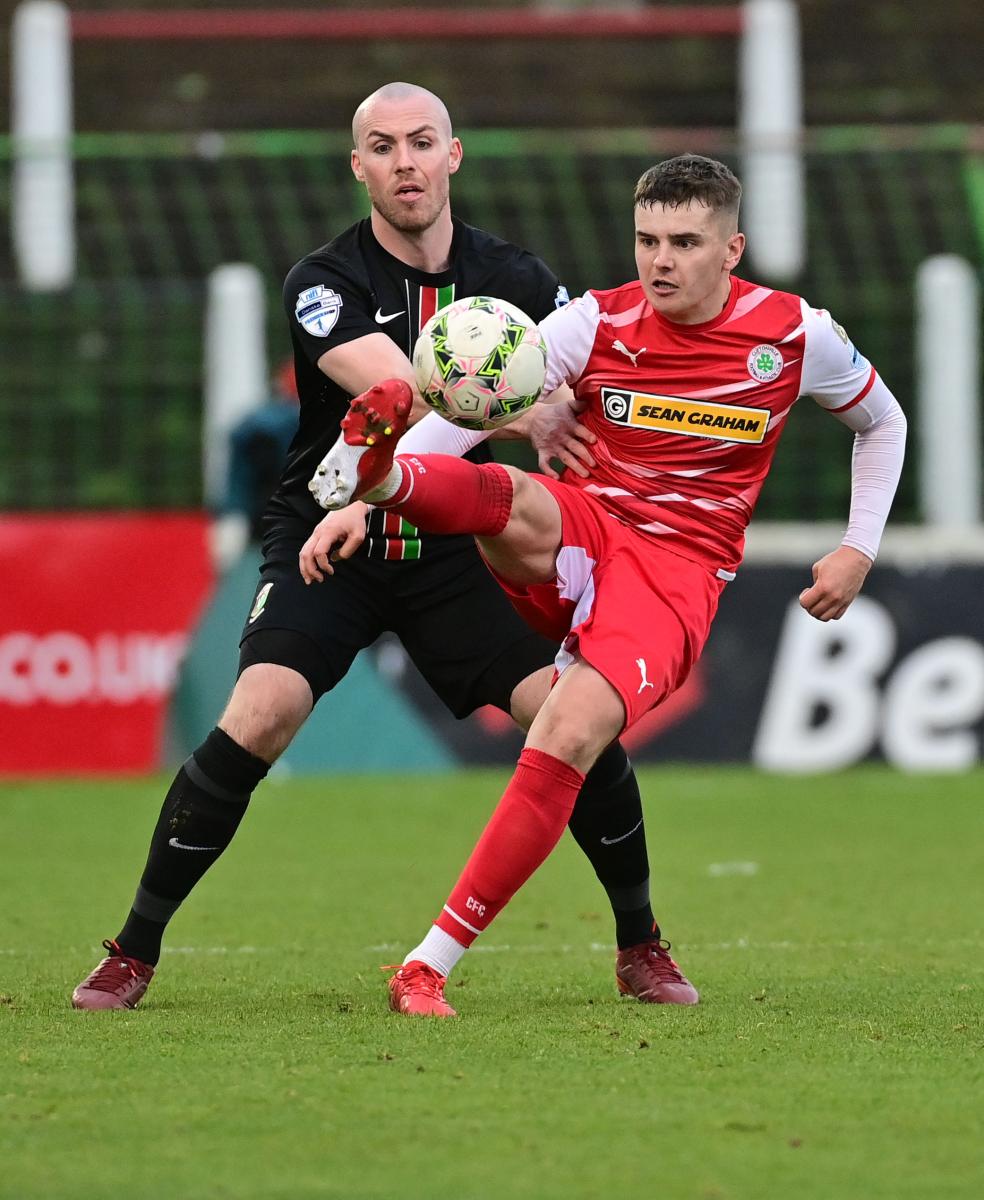