A defining day in Glentoran's season and probably in some of the players' Glentoran careers. With 6th placed Glenavon facing Crusaders and 7th placed Dungannon Swifts hosting Linfield it was likely that, with a victory, Glentoran could close the gap on the two teams immediately above them. Indeed as things turned out, a win would have left Glentoran just 3 points behind Glenavon with the Lurgan blues visiting the Oval in two weeks time.

The only change to the starting XI from the team which defeated Ards 3-1 last weekend was Calum Birney coming in for the suspended James Ferrin. For the first quarter of an hour Glentoran dominated possession and had a few chances to get the first goal. With just 2 minutes gone Curtis Allen was fouled outside the area but Chris Lavery's free kick didn't trouble the visitors' defence. 5 minutes later the Glens had an even better opportunity when a Mallards' defender handled the ball on the edge of the 'D'. Allen took the free kick but it was an easy save for Richard Brush. On 16 minutes the Glens broke clear again however Aaron Harmon wasted a great chance to find Allen in the danger area.

A minute later and Ballinamallard United went in front, breaking down the left and crossing into the box for Ryan Mayse to slot home from close range. A disappointing goal to concede. Even more so given that it seems to happen at least once in every game now with the Glentoran defence resembling the Keystone Cops! It could have been worse 4 minutes later with Jay Magee giving away a needless foul 25 yards from goal. Shane McCabe rolled it to Mayse but his shot struck the Glentoran wall.

Midway through the half Ciaran Caldwell put in a dangerous cross from the left. Allen dummied it to leave Harmon in a great position but once again he failed to find a team mate in the box. On 30 minutes the dangerous Chris Lavery broke clear but he couldn't beat the keeper in a 1 v 1 situation. Lavery went on another mazy run on 38 minutes, cutting in from the left and ghosting past defenders. His right footed effort deserved a goal but was deflected wide of the upright.

Stephen McAlorum replaced Aaron Harmon for the second half but it continued to be much the same as the first; the Glens huffing and puffing and creating the odd chance but never really looking like scoring. A Lavery corner on 52 minutes was headed goalwards by Magee and flicked on by Stephen O'Flynn but cleared off the line by the Mallards defence. Ballinamallard United then had a chance to extend their lead when McAlorum's slack pass gave away possession inside his own half. Shane McGinty drove into the area but dragged his shot wide of the far post. 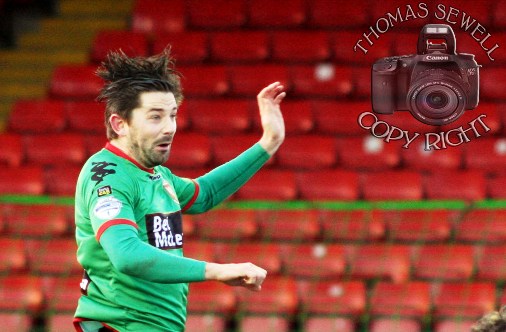 Right on the hour mark it should have been 1-1. Chris Lavery's cross was met perfectly by Curtis Allen and his header looked destined for the top corner before Richard Brush tipped it over. A great save! A minute later and Ciaran Caldwell's cross found Stephen O'Flynn on the penalty spot but the big striker headed straight at Brush. With just 12 minutes remaining Chris Lavery, Glentoran's biggest threat on the day, had another 1 v 1 opportunity but once again shot straight at the Mallards' keeper.

On 81 minutes Elliott Morris pulled off a great save to deny Ryan Mayse a second goal. Despite the introduction of both Nacho Novo and Jonathan Smith the Glens failed to put Richard Brush under any real pressure and Ballinamallard United saw the game out, claiming all 3 points. That's 2 wins and a draw for the Co Fermanagh side against Glentoran this season and the two teams are likely to meet again at Ballinamallard after the league splits. 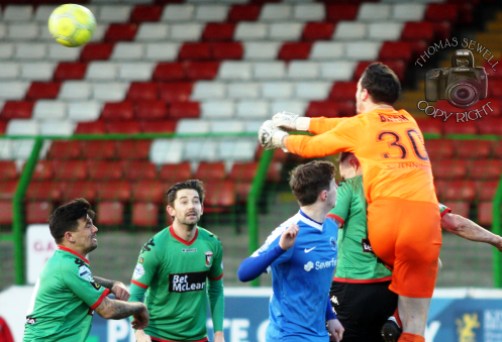 The home support were understandably disappointed after what was a poor performance and voiced their frustration at the final whistle. Perhaps it's time for a few changes on the field. Perhaps some players have had too many chances. Maybe it's time to give others their opportunity! Pride, passion, fight, committment, hunger and desire are not requirements to play for Glentoran - they are demanded.