Glentoran travelled to Killymoon Rangers missing five of their first team regulars; Elliott Morris (ill), Colin Nixon, Jay Magee, Richard Clarke and David Howland (all injured). With a much changed team and playing away from home on a difficult artificial surface this had all the ingredients for a cup upset.

An early goal settled the Glentoran team and their large travelling support. It came in the 2nd minute; Stephen Carson’s left wing corner finding the unmarked Calum Birney in the area and the big defender fired home from about 12 yards. On the quarter hour mark Marcus Kane got on the end of a poor clearance from Johnny Young but his header was easily saved by Michael Brown in the Killymoon goal. Birney headed over from another Carson corner (19) and Stephen McAlorum shot wide from a 30 yard free kick on 23 minutes. With 30 minutes played another Glentoran corner was only partially cleared and a superb 20-yard volley from Mark Clarke brought an excellent save out of Brown. Killymoon Rangers almost grabbed an equaliser on 36 minutes. A corner from Moore was headed goalwards and blocked on the line by Aaron Hogg with John McGuigan completing the clearance. A through ball from McAlorum put Carson clear on the right (39) and his cross looked like finding Andy Waterworth in the area but for a great interception from Steven Purvis. In first half stoppage time McAlorum did well to intercept the ball in midfield and send John McGuigan clear on the left. He took the ball into the area before crossing to Marcus Kane who had a tap in to make it 2-nil.

The early part of the second half saw both teams cancel each other out with the only real attempt on goal coming from Kane (58) when he tried an ambitious shot from 35 yards. Just after the hour mark though, Killymoon Rangers were right back in the contest. Birney conceded a corner on the Killymoon right. Moore took the set piece and an unmarked Mark Harkness headed home from 8 yards out. 2 minutes later a great break involving Carson and Waterworth ended with the Glens number 9 firing just wide of the goal. McGuigan blazed over from 25 yards on 66 minutes and 3 minutes later substitute, Jim O’Hanlon saw his effort saved by Brown. Jimmy Callacher went close (74) when he got on the end of a McAlorum knock down but his shot shaved the crossbar. With just under 10 minutes remaining Birney sent O’Hanlon clear down the left. O’Hanlon produced the perfiect cross and Mark Clarke was in the right place to head home and restore the Glens 2-goal cushion. In the final minute Carson picked out Waterworth in the area and he rounded things off, slotting home number 4. Waterworth almost grabbed another on 92 minutes and then keeper Michael Brown produced a superb save to deny Jim O’Hanlon’s 25 yard curling effort. 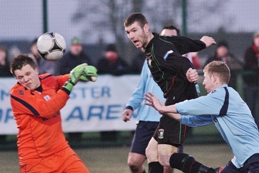