Glens through to quarter-final

Two goals down inside 10 minutes wasn't exactly what the Glentoran team, management or supporters had expected at Clandeboye Park this afternoon however the players turned it around and hit five goals of their own to book their place in the quarter-final on the 2013 Irish Cup.

With two central defenders ruled out of today’s game, Jay Magee suspended and Calum Birney through injury, skipper Colin Nixon was back in the starting XI as the Glens travelled to Clandeboye Park to face Bangor in the 2013 Irish Cup.

Glentoran started poorly on a difficult surface and were a goal down after just 2 minutes, Thomas Lambe heading home Andy Morrow’s cross from the right. Richard Clarke almost levelled 5 minutes later, controlling the ball well on the edge of the area before firing a shot just over the crossbar. On 11 minutes the home side doubled their advantage! 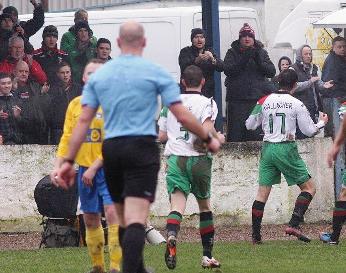 Right back, Ryan Mann went past Stephen Carson before crossing for Michael Doran who easily beat Elliott Morris from 6-yards out. On 13 minutes Andy Waterworth pulled a goal back for the Glens. His initial effort was blocked but Bangor failed to clear their lines and Waterworth picked up the ball again, side stepped the defender and rifled his shot low into the far corner past the helpless Justin in the Bangor goal. 5 minutes later the visitors were on level terms. David Howland was fouled on the right. Stephen Carson took the free-kick and found Jimmy Callacher who headed home from 8 yards. Glentoran began to take control and both Howland (20) and Mark Clarke (21) went close with efforts from just outside the area. Glentoran finally got their noses in front midway through the first half. Another excellent set piece from Carson again found the head of Callacher. The defender’s header hit the underside of the bar but with players appealing for a goal, Colin Nixon tried to force the ball over the line. Despite protests from the Bangor players, the assistant referee judged that the ball had 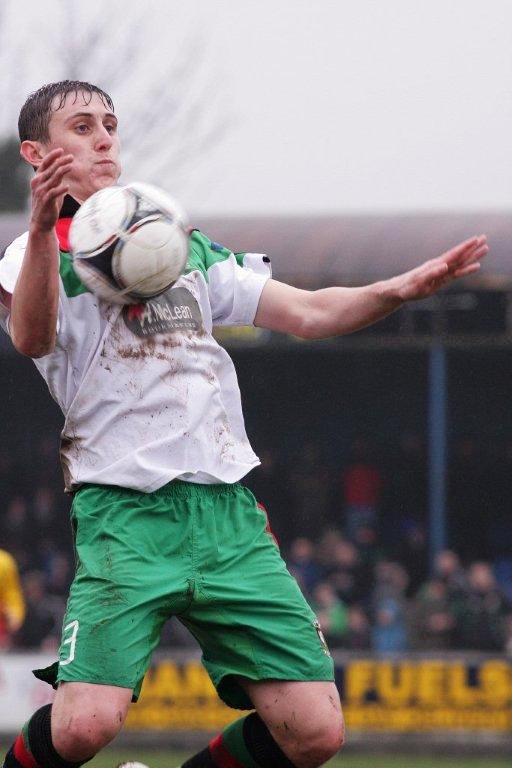 indeed crossed the line and referee Hunter awarded the goal. Waterworth went close to making it 4-2 on 26 minutes the ball striking the keeper on the face before being hacked clear. Callacher’s 25 yard free-kick (31 mins) was deflected off the wall. Marcus Kane reached the ball but couldn’t keep his header on target. Andy Waterworth continued to torment the Bangor defence and really could have netted a first half hattrick but for some good goalkeeping and some wayward finishing.

Glentoran continued to press after the interval and on 48 minutes virtually wrapped the game up. Again Bangor failed to clear their area and Richard Clarke won possession before finding Marcus Kane on the edge of the area. He smashed the ball home and the Glens were in the driving seat. Sean Ward (56) had a shot blocked in the area and a Carson corner was headed wide by Kane. Carson then set up Richard Clarke but his drive was deflected wide of the target. On 65 minutes Bangor, on a rare excursion into the Glentoran half, almost reduced the 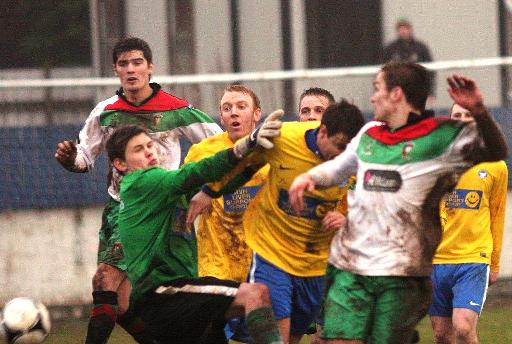 deficit when Lambe’s shot whistled past the post. With just under 10 minutes remaining Glentoran netted a fifth. Stephen Carson’s in-swinging corner from the left was glanced home at the near post by David Howland. Howland almost scored again on 83 minutes, clipping the crossbar with a 25 yard effort.