Following one of their best performances of the season last Saturday and the defeat of Linfield at Seaview last night, Glentoran had a great opportunity to close the gap on third place to just 2 points with a win against Dungannon Swifts at the Oval tonight.

Eddie Patterson was forced to make one change from Saturday’s team; Sean Ward suffering from a neck injury forced to sit this one out. The Glens started well and were in front with just 6 minutes on the clock. Jason Hill galloped onto a through ball and as the Swifts’ keeper came rushing out of his goal, Hill slipped the ball past him It appeared to be going in but striker Andy Waterworth made sure to net his 20th goal of the season. Waterworth could have made it two on 13 minutes. Richard Clarke’s pass was picked up by Waterworth who outpaced the defence but was denied by Johnny Curran in the visitors’ goal. It seemed only a matter of time before the Glens added to their goal tally as Stephen McAlorum’s (16) drive was deflected narrowly wide and then Clarke set up McAlorum again but his volley, from just inside the area, was off target. Somewhat against the run of play Dungannon Swifts drew level on 28 minutes. Martin Murray conceded a corner which was scrambled behind by the defence. This time the corner was flicked home at the near post by James Costello. On 39 minutes the visitors went in front. Jim O’Hanlon was dispossessed on the halfway line and Michael McKerr carried the ball into the area before firing it past Elliott Morris. Andy Waterworth went close to making it 2-all on 41 minutes when he got on the end of Jimmy Callacher’s clipped pass but his volley was inches over. In the final minute of the first period Kevin Bradley did well down the right before crossing onto the head of Waterworth but Curran gathered his effort at the second attempt.

The second half saw Glentoran continue to dominate possession but without really creating any clear cut chances. The best opportunities 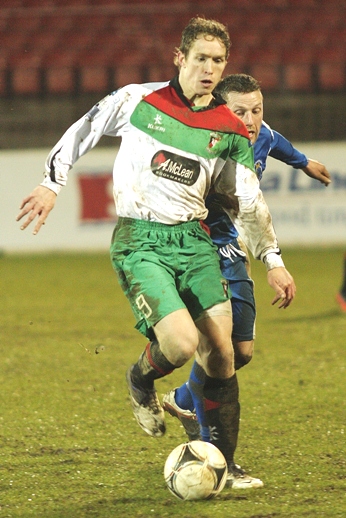 fell to Richard Clarke (53) who forced the keeper into a decent save and Jim O’Hanlon who fired over when well placed. Another mistake in midfield though saw the Glens fall further behind on 64 minutes. This time McAlorum lost the ball and James Costello carried it to the edge of the area before curling a delightful shot around Morris and into the far corner. A frustrated Eddie Patterson made three changes to try and rescue the match but the Swifts had something to hold on to and fought to defend their lead. The home crowd grew impatient with referee Colin Burns as he failed to take action against some blatant time wasting. With 5 minutes remaining a cross from substitute, Stephen Carson was glanced home by David Howland. The Glens went to three at the back as they searched frantically for an equaliser. With five substitutions, a couple of injuries and some time wasting, the supporters and players were somewhat surprised to see Mr Burns add just two minutes of stoppage time! The home side forced a couple of corners during the added time but couldn’t force the ball home and so an unbeaten domestic run, going back over 2 months & 8 matches came to an end. Hopefully another will begin at the weekend.