Glens March On To Quarter Finals

Full-time St Patrick's Athletic of Dublin were big favourites to beat Glentoran in the Setanta Cup this year having finished 3rd in their league last season. But a gritty display in Dublin earned a hard fought 0-0 draw last week, enabling Glentoran to be more adventurios in Belfast this evening and eventually secure the vital goal which sends us through to the next round.

Glentoran made 7 changes from the 1-1 draw with Linfield on Saturday with only Jason Hill, Stephen McAlorum, Mark Clarke and Andy Waterworth retaining their places. Glentoran's youthful side started the game nervously with a goalmouth scramble after just 2 minutes nearly ending up in an own goal after a clearance was deflected off our own man.

Similarily to the game in Dublin, the first half was a tight affair with neither side able to get on top. Martin Murray and John McGuigan showed enthusiasm in getting the ball forward but with little end product. Andy Waterworth had 3 efforts on goal from outside the box in the half but all of which missed the target. Martin Murray optimistically tried his luck from 30 yards out from a free-kick but it sailed harmlessly over the bar. St Pat's rarely threatened with only a couple of efforts on goal themselves which didn't trouble Aaron Hogg in goals.

The second half started more brightly as both sides appeared after 3/4 of the tie had been played to open up in search of the winning goal. Jim O'Hanlon came into the game a lot more down the right flank and Martin Murray continued to be the danger man on the other side. O'Hanlon jinxed past his man on the far byline and drove into the box on the 55th minute only to see his touch fail him at the crucial moment, enabling the Pat's defence to recover. 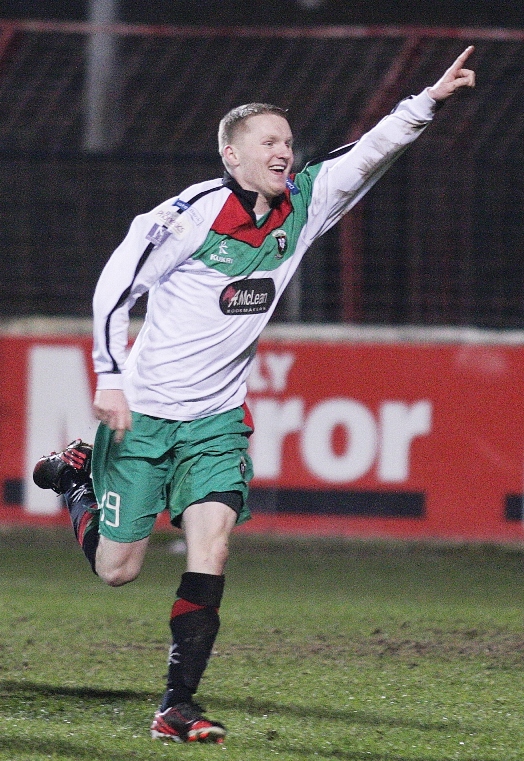 Glentoran did get the breakthrough on the 62nd minute. Martin Murray's hard work paid off as he scored a goal from a fantastic piece of improvisation. After the ball fell lose in the box, Murray managed with his back to goal to flick the ball over his head through the covering defenders to beat the St Pat's keeper and nestle in the corner. Despite not having much power, the surprise and accuracy of the effort left the Pat's keeper stranded and with no chance of making the save.

Glentoran were instantly brought back to reality when just seconds after the restart, a good cross from the far side saw a free header agonisingly hit the post for St Pat's. It was the Irish side's best moment in the game and Glentoran were lucky to survive. After that Glentoran defended admirably as they restricted Pat's to few chances. There was a brief interruption as the referee had to be replaced with 15 minutes to go but the pattern of play remained the same after the resumption of play.

Aaron Hogg was forced to deal with a number of deep crosses but was able to punch the ball clear of his goal on a number of occasions. Colin Nixon and Calum Birney were strong at the back while Stephen McAlorum broke up the opposition play in midfield superbly. Pat's had their best chance on 89th minute when the ball fell loose on the penalty spot but Aaron Hogg reacted quickly to leap high and tip the ball over the ball. As the board went up for 5 minutes, Glentoran fans were anxiously whistling for the referee to do the same. Pat's had one final chance when another loose ball was knocked over Hogg's bar on 95th minute. The referee ended the game shortly after.

Tonight's game sees Glentoran into the quarter finals of the Setanta Cup where we will face last year's League of Ireland Champions Sligo Rovers.