Conditions weren’t the best at the Ballymena Showgrounds this afternoon but those who made the effort to attend were treated to an exciting game of football. Prior to kick-off a minute's silence was held in memory of Roy Coyle's grand-daughter, Darcy who passed away during the week. 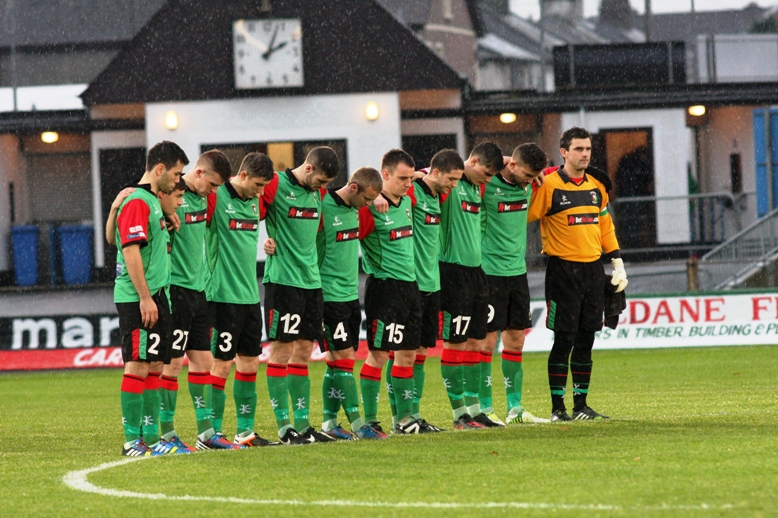 Glentoran manager, Eddie Patterson named an unchanged starting XI as last weekend against Cliftonville and once again his team were up for the challenge.

Ballymena, coming into this fixture on the back of two defeats in a week, had the first effort on goal with just 2 minutes played but Tony Kane’s effort flashed wide. Marcus Kane was put in by Richard Clarke a minute later but his shot was deflected for a corner. Mark Surgenor looked to be in on goal on 5 minutes but Jimmy Callacher made a great block to deny him. It was end to end stuff; Miskimmin set up Kane whilst at the other end Elliott Morris saved well from David Cushley. Marcus Kane was again off target (15) and Alan Teggart forced another save out of Morris. 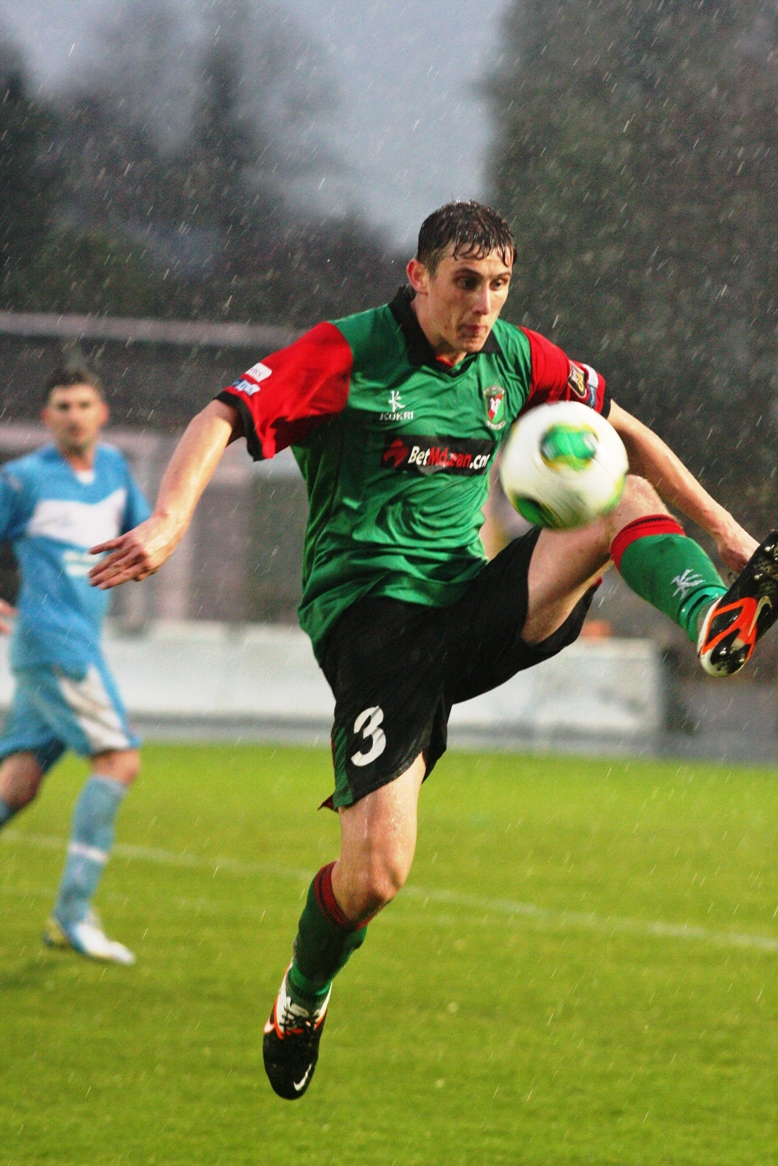 Midway through the first half the home side went in front. From David Cushley's pass, Alan Teggart picked the ball up on the edge of the Glentoran penalty area and he drilled the ball past a helpless Morris. Following the goal both sides struggled for a spell to put together any meaningful attacks but 10 minutes from the interval the Sky Blues should have doubled their advantage. Referee Burns awarded United a free kick. The ball was played into the danger area and with the Glentoran defence struggling to clear it Allan Jenkins’ effort struck the underside of the crossbar. A let off for the Glens and they took full advantage 3 minutes later. A throw-in near the left corner flag was eventually played into the penalty area by Jason Hill. Jordan Stewart controlled the ball before turning and firing a low shot into the bottom corner of the net with Stuart Addis flat-footed. It was Stewart’s first goal for Glentoran and one that his recent performances deserved. Right on the whistle a Jimmy Callacher free-kick was turned away for a corner by Addis. 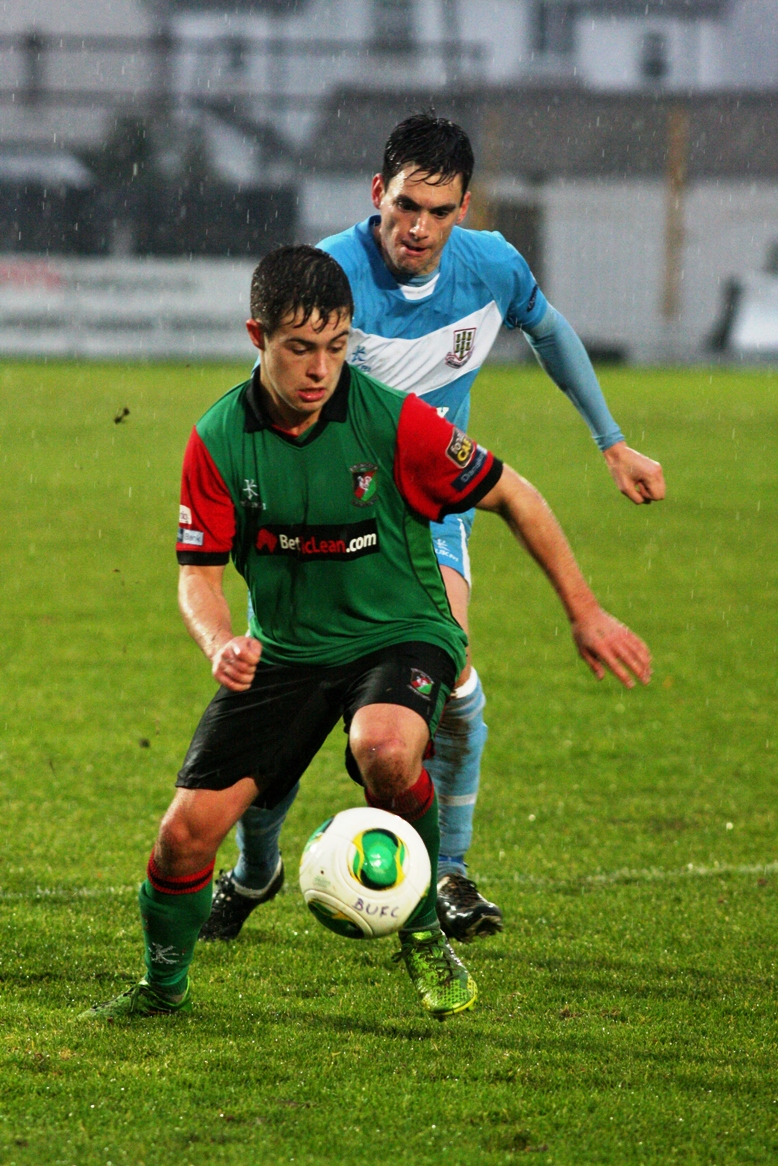 As in the game at Coleraine a couple of weeks back, Glentoran were quickly out of blocks at the start of the second half. On 49 minutes a Glentoran free kick was flicked on by Marcus Kane. Jim O’Hanlon controlled the ball in the area and skipped past the static defence before driving it past Addis. Four minutes later it was 3-1. Richard Clarke did well to hold the ball up on the edge of the box before laying it off to Marcus Kane. The midfielder’s shot from 20 yards went straight into the top corner; his 4th goal of the season. Just before the hour mark Tony Kane forced Morris to turn the ball behind. From the resulting corner David Cushley shot just wide. A superb pass from Clarke then found Stewart. The young winger drove past Johnny Taylor but his shot was well saved by Addis. The ball broke back to Stewart but Addis again denied him. Within a minute the Glens were on the attack again. Jim O’Hanlon broke away but his chip shot drifted just wide of the upright. On 64 minutes Ballymena Utd pulled a goal back. A mishit shot flew across goal and was headed home from inside the 6-yard box by substitute, Gary Liggett. 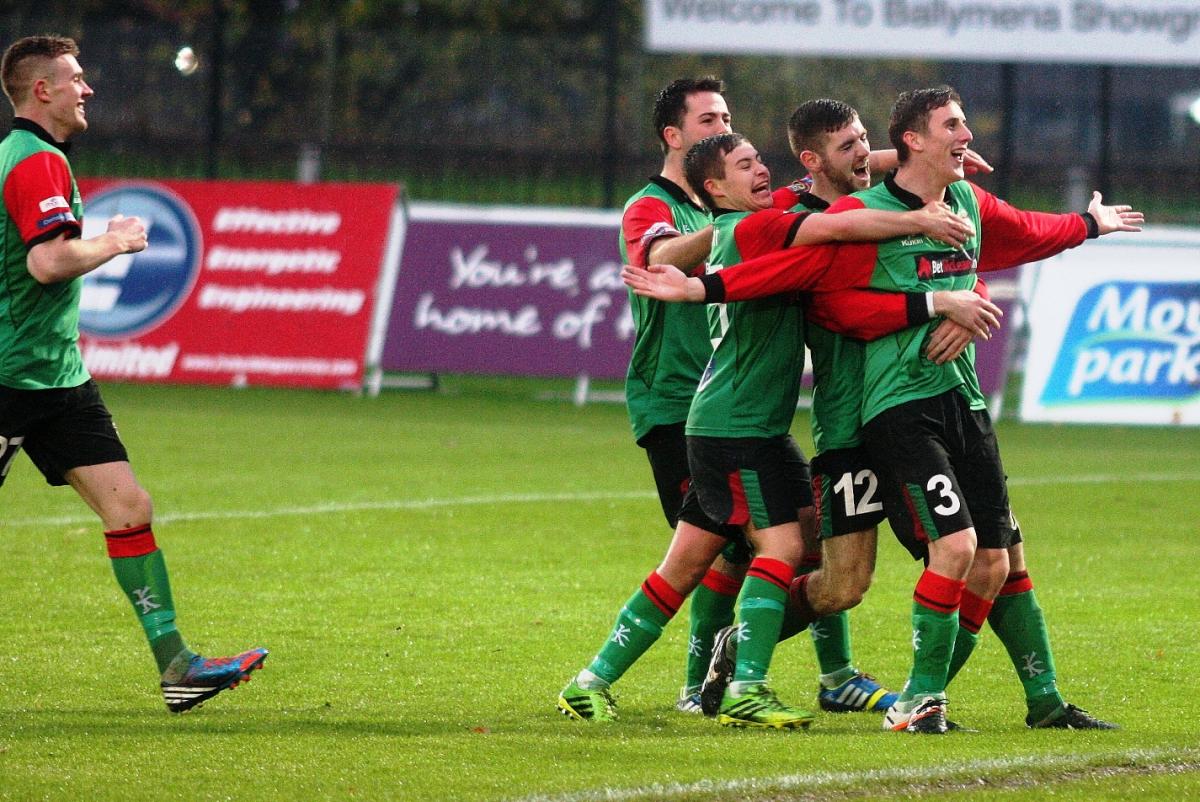 3-2 became 4-2 just 3 minutes later. A sublime pass from Jimmy Callacher put Jordan Stewart clear again. Stewart took the ball in his stride and this time left Addis helpless, smashing the ball past him for his second of the afternoon. Glentoran were playing some great football on the break now and on 72 minutes Richard Clarke put Ryan O’Neill clear down the right. O’Neill’s cross found Mark Miskimmin in the area but he went for the spectacular finish and got it all wrong. Marcus Kane went close with another header and then former Glentoran player, Johnny Taylor had his effort blocked by a resolute Glens defence. Glentoran should have had a penalty with 5 minutes remaining when O’Hanlon, clear in on goal, was tripped in the area but referee Colin Burns surprisingly ignored the claims. In the dying seconds of the 3 minutes of added time Alan Teggart grabbed another goal for United but it was merely a consolation.

With Cliftonville, Glenavon and Portadown all dropping points, it was a good day for Glentoran. They moved up to 4th place in the Danske Bank Premiership, level on points with Glenavon in third and just 3 points of Crusaders in second. Next up for the Glens is another away trip to Dungannon Swifts.