Prior to the start of today's Danske Bank Premiership fixture the flag was lowered to half mast as the officials, players and supporters of Glentoran and Lisburn Distillery observed a minute’s silence in memory of Noel, Graham and Nevin Spence who tragically lost their lives a week ago.

When the game got underway the home side were quickly on the attack with Andrew Waterworth shooting wide with barely 10 seconds on the clock. On 5 minutes a superb through ball from David Howland, starting in place of the suspended Mark Clarke, put Waterworth in again but Lee Windrum in the visitors’ goal was quickly out to deny him. Glentoran continued to dominate the opening quarter of an hour with a Sean Ward cross (8) being scrambled away for a corner and then a dangerous ball in from John McGuigan (13) also being turned behind. On 15 minutes the Whites almost grabbed the lead. A deep cross from the right was met by Gary Liggett and his header looked destined for the top corner before being brilliantly turned away by Elliott Morris. Windrum did well to keep out Jim O’Hanlon’s shot on 25 minutes and shortly afterwards he also denied Richard Clarke. Just before the half hour mark Jimmy Callacher did well to pick out Waterworth but again Windrum was quickly out to clear the danger. On 34 minutes Jim O’Hanlon latched onto a knock-down from Waterworth but his 25 yard shot was well off target. 3 minutes from half-time Scott Davidson had a great chance to put Lisburn Distillery in front but Elliott Morris stood up well and saved Davidson’s powerful shot. Jordan Forsythe blasted high and wide (43) before the Glens finally broke the deadlock. Stephen Carson whipped a cross in from the left and David Howland nodded the ball into the path of Richard Clarke who scored from close range.

After the break, a rasping 20-yard drive from John McGuigan was narrowly over the bar. On 51 minutes Andy Hunter should have levelled things up but his 8-yard volley was somehow kept out by the excellent Morris. Jason Hill broke down the left (56) and fed Waterworth. Andy took the ball to the by-line before crossing to the back post but it was just too high for Jim O’Hanlon to direct his header on goal. Elliott Morris saved comfortably from Gary Liggett (61) and then his opposite number got down superbly denying Jay Magee from Carson’s corner. On 66 minutes Glentoran doubled their advantage. Clarke and Howland combined well in the midfield before finding O’Hanlon on the right. His excellent cross was controlled by Andy Waterworth and the big number 9 turned and fired the ball into the roof of the net for his 7th goal of the season. It was all Glentoran now and Callacher went close with a header from a Marcus Kane corner (73). Kane himself was about a yard wide of the goal (76) with a speculative 25-yard effort which caught Windrum off guard and then O’Hanlon also saw a 20-yard effort (83) just miss the target. A minute later the woodwork came to Lisburn Distillery’s rescue twice! Waterworth’s shot was deflected onto the post but the ball came back across goal to the unmarked, Marcus Kane. He hit the outside of the other post with the goal at his mercy. On 90 minutes substitute, Stephen McAlorum found Richard Clarke who, in turn, put Andy Waterworth clear again. This time Waterworth took the ball around the keeper before stroking it home. In stoppage time Liggett’s weak header was wide of the target whilst at the other end, Marcus Kane headed wide from a Jason Hill free-kick. 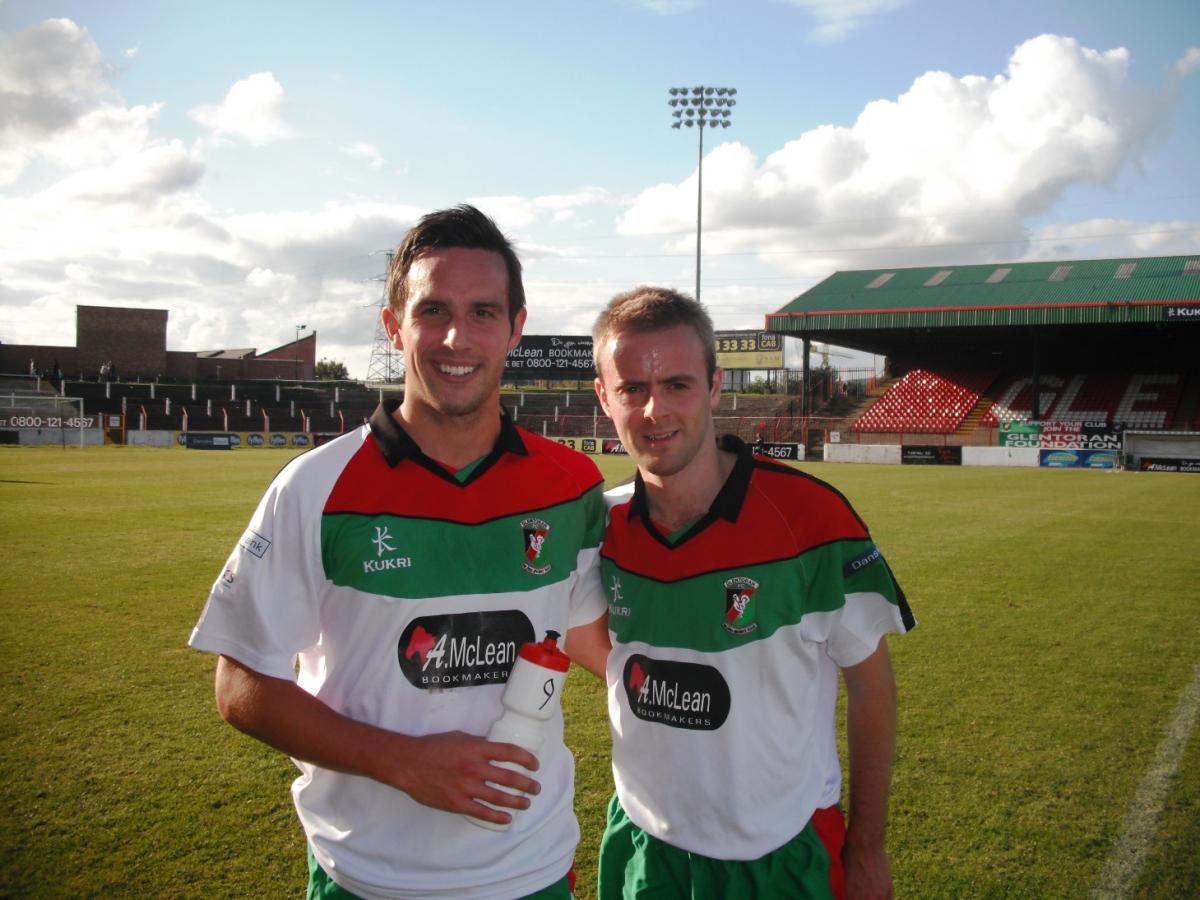