As the sun split the skies in Dungannon, Glentoran continued where they left off in Ballinamallard with a comfortable 3-1 victory in Dungannon this afternoon. The Glens started brightly with Jay Magee heading over from a Stephen Carson corner early on. Andy Waterworth has been in fine form of recent and showed his current confidence by outpacing the Dungannon defence only to fire into the side netting soon after.

On the 14th minute a moment of concern for the Glens as centre back Calum Birney was taken off with what looked a serious foot injury. Birney collapsed in clear agony after he was caught by a stray Dungannon boot and couldn't continue. David Howland made a long awaited return to the first team squad coming on in Birney's place with Jimmy Callacher returned to the centre half role.

The Glens struggled to find any real first half rhythm and were almost caught out in a sustained spell of pressure from Dungannon. Elliott Morris made a smart save down low to his right whilst David Howland and Jimmy Callacher were forced into making last-ditch clearances. However on the 35th minute Glentoran made the breakthrough after the referee deemed contact on Richard Clarke in the box was worthy of a penalty. Jay Magee stood up and confidently slotted home his 3rd goal of the season.

The Glens shot themselves immediately in the foot just one minute after taking the lead, giving Stephen O'Neill time to shoot from distance. Elliott Morris managed to get a hand to the ball however couldn't prevent it creeping in off the bar. Admitedly it was an excellent strike by O'Neill but the Glens will be disappointed to concede so soon after gaining the advantage.

The second half started with a similar tempo to the first with neither side taking control. However a skilful run from Jim O'Hanlon down the right hand side resulted in an inch perfect cross to Richard Clarke on 52 minutes. Clarke headed goalwards where it was blocked on the line by the Dungannon defence but Andy Waterworth was on hand to pounce on the rebound and another goal to add to his impressive start to the season. 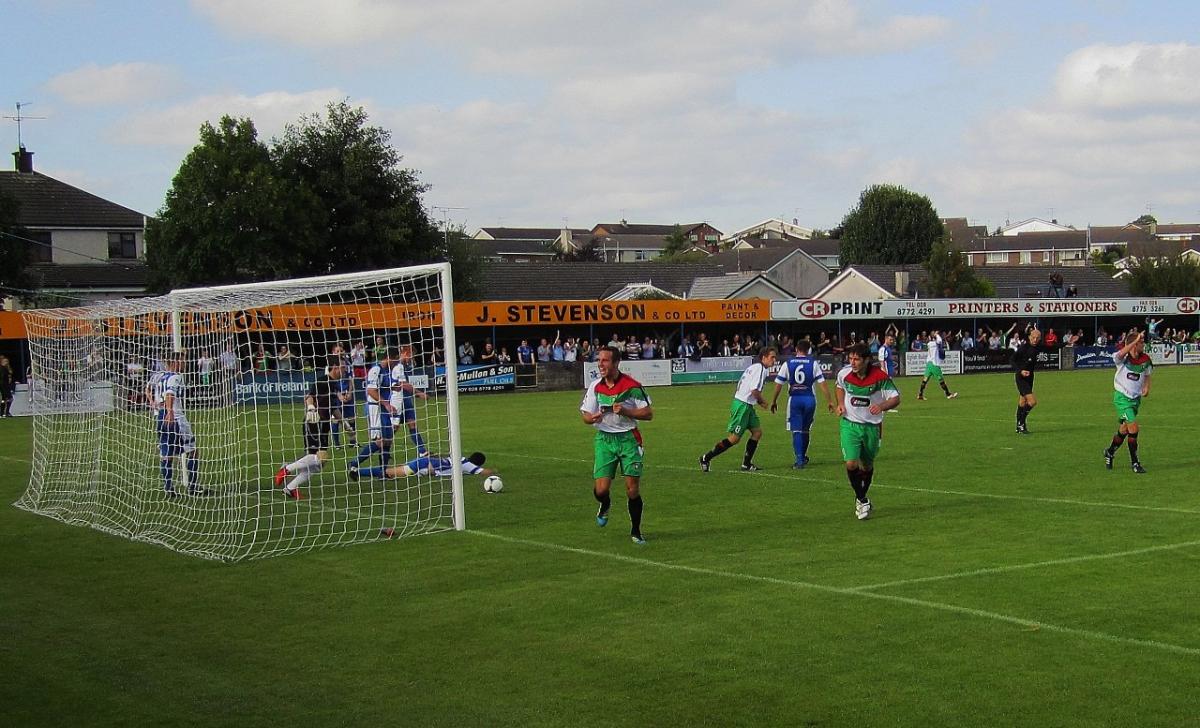 From this point on the Glens were in total control and never looked like giving up the three points. Jim O'Hanlon went close with a shot from the edge of the box and from the resulting corner Jimmy Callacher had a header cleared off the line. Shortly after, O'Hanlon found Waterworth with a neat flick over the Dungannon defence and the in-form Waterworth never looked liked missing. He clinically dispatched his shot into the bottom corner, all but securing the points for the Glens. O'Hanlon and John McGuigan had two further chances to add to the goal tally with both went narrowly wide.

Overall it was another satisfying win for the Glens which sees us remain unbeaten with three wins and three draws in the league so far. Today's three points moves us up to second in the league, setting up an exciting top of the table clash with Coleraine at the Oval next Saturday.