Glentoran Academy hosted the Manchester United Academy on October 3rd at the Oval. This was a night in which a mixture of our U15 & U16 squads had the chance to test themselves against one of the best club academies in the world.

After a good start, Glentoran then found themselves pegged back and defending deep, the Manchester United attackers always on the move and probing at the Glens back four, but they held firm along with two brilliant saves from Morrow.

The Glens settled back into the game again and soon had their chance; Curtis Brown pushed on from left back and found Jake Moore on the left wing, and after cutting through the Manchester midfield, Jake cut in onto his right foot and launched a thunderous strike from 25 yards into the top left hand corner of the Manchester United net.

The rest of the game was played out at a very high tempo, with Glentoran centre back pairing Morris and Doyle proving vital to the outcome. Glentoran were then presented with a great opportunity to go two up. Cassells picked out Luke Murtagh, who played a lovely lobbed pass into Curtis Baine to finish into the top corner, only for it to be ruled out for offside.

The game finished with both sides exhausted after a great display of attacking football. Manager Jason Cummings said, “the evening was a great success and I’m thrilled that our Academy lads got this opportunity to show what they can do on a big pitch against quality opposition. I’d like to thank the players for the effort they put in to achieve this great result. None of this could have been achieved without the hard work of the coaches & players. On behalf of Glentoran academy I’d also like to thank Tony Coulter and the Manchester United Academy for playing us, and for the Manchester United shirt signed by the entirety of their current 1st Team squad which I’m sure will go towards raising some much needed cash for our Academy”. 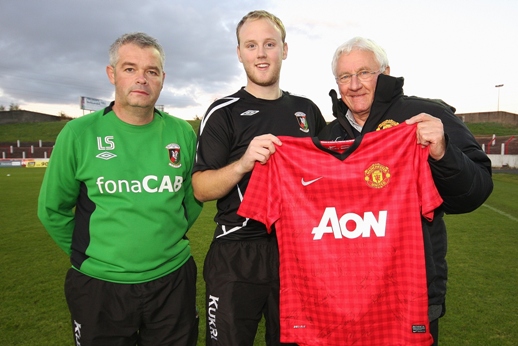