Glentoran kept up their push for a top six spot with a battling 2-2 draw at Mourneview Park in the Danske Bank Premiership. 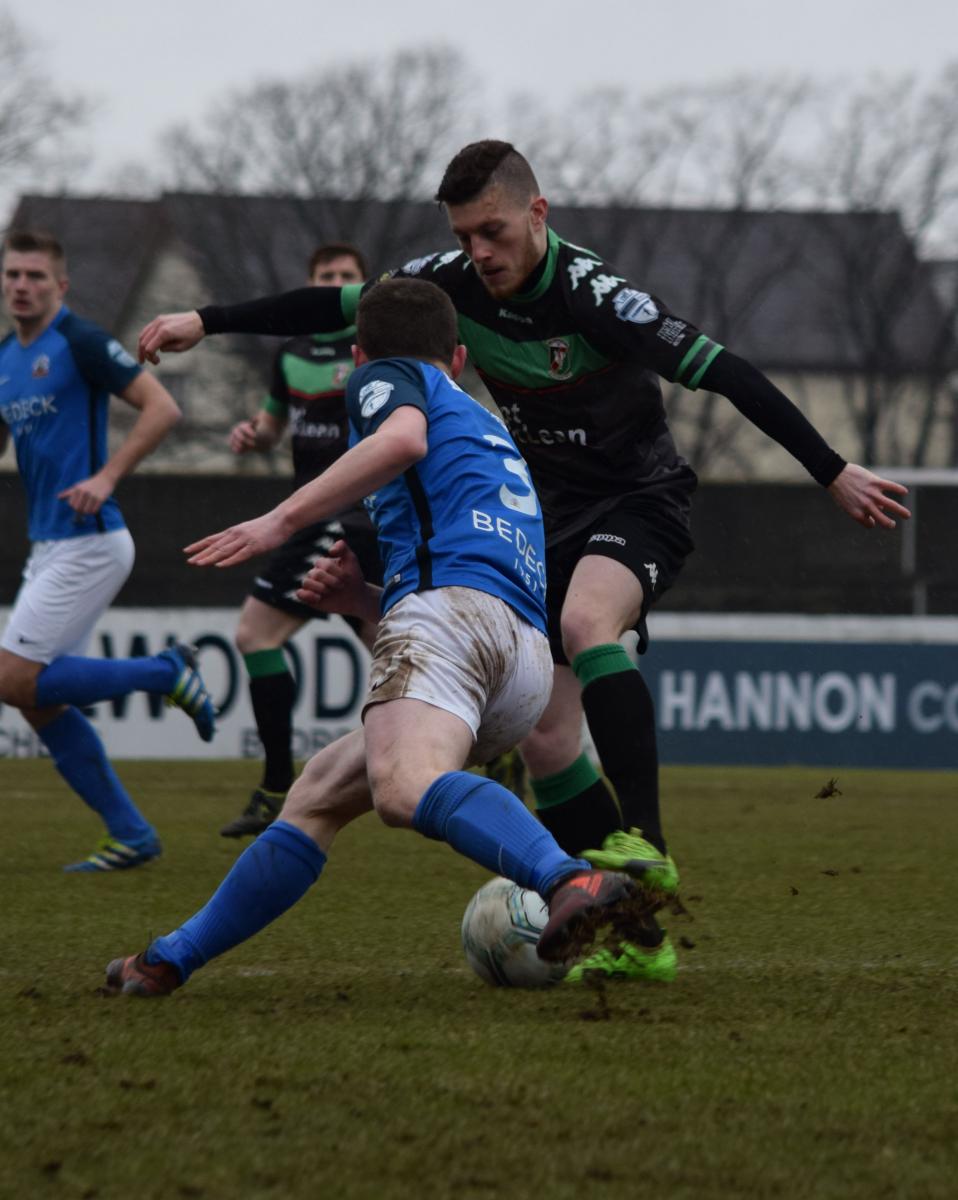 Following last week's disappointing postponement due to the 'Beast from the East', it was time for the real East to head west down the M1 to Lurgan. The Glens were looking for a hat trick of wins under manager Ronnie McFall, while Glenavon must have been still smarting from their shock Irish Cup elimination to Loughgall and heavy mid week defeat at the hands of Crusaders. Ronnie McFall had gone for a tried and tested 4-4- 2 formation when the same starting eleven as our last game to Warrenpoint Town lining up on a very heavy Mourneview pitch.

Some of the fans had barely found a seat in the strangely restricted accommodation when Glenavon struck first. Mark Sykes out muscled the Glens midfield and before he was closed in on by the defence, he rifled a powerful shot from outside the box into the back of the net. 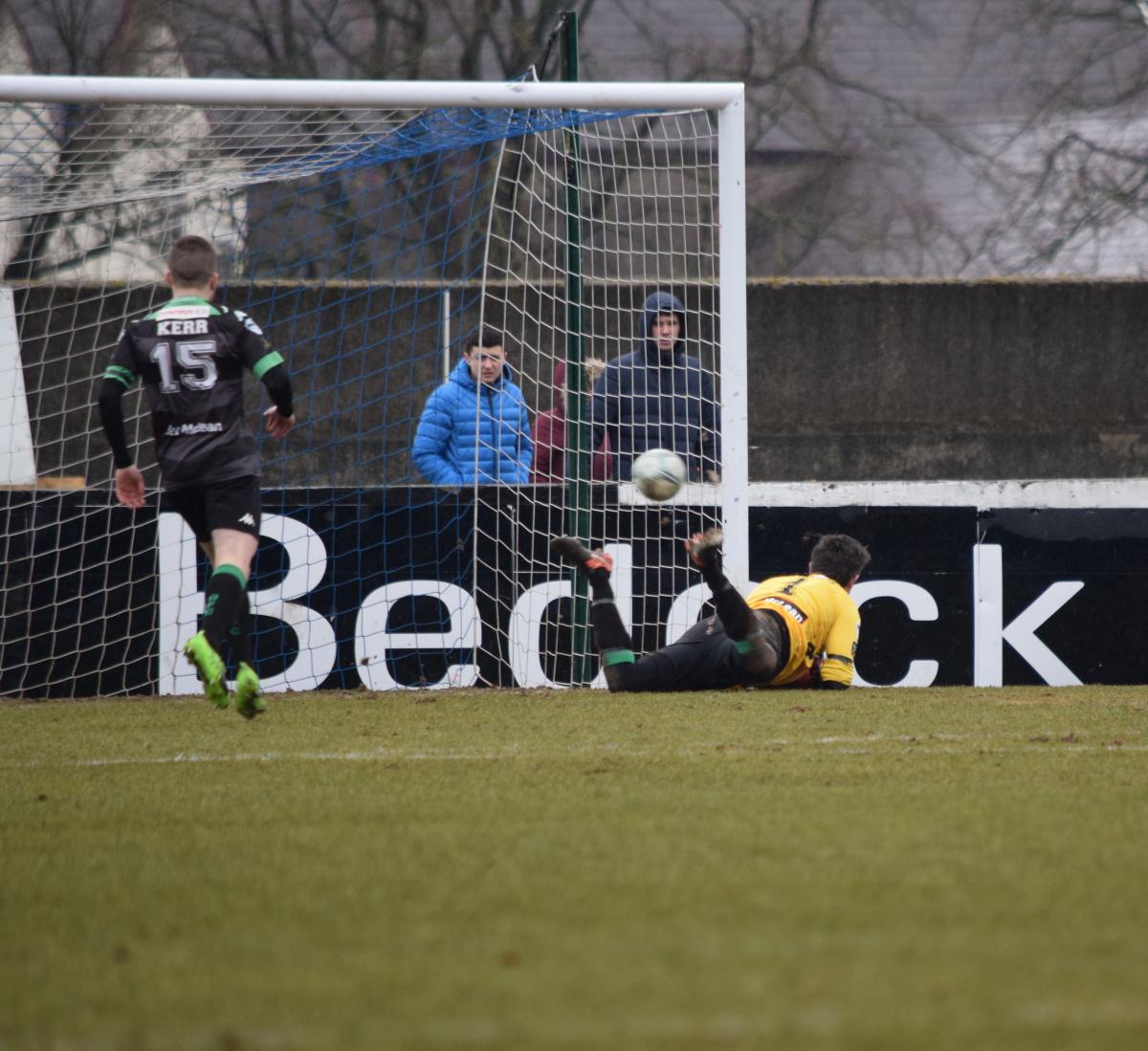 This seemed to stun the Glens, with Glenavon dominating the game with frequent on the ground raids against the Glentoran back four. Elliott Morris was ever on his guard with a string of good saves made. However the Glens were never totally out of the game but were restricted to the odd opportunity, with in-form strikers Allen and McDaid receiving very little support from the midfield who were effectively pinned backed with defensive duties. As the half progressed Glenavon became stronger and posed a real threat to the Glentoran goal which included a spectacular overhead kick by Stephen Murray. They were also helped in the 39th minute when Sammy Clingan clearly controlled the ball in the box with his arm and saw his subsequent shot just clearing the bar. It must also be noted that the referee appeared content to let the blatant foul go! Although Glenavon dominated the first and probably should have gone in for half time two nil up, the Glens defence did fight a strong rear guard action, with Willie Garrett worthy of special mention for getting his body between the ball and the net on several occasions. 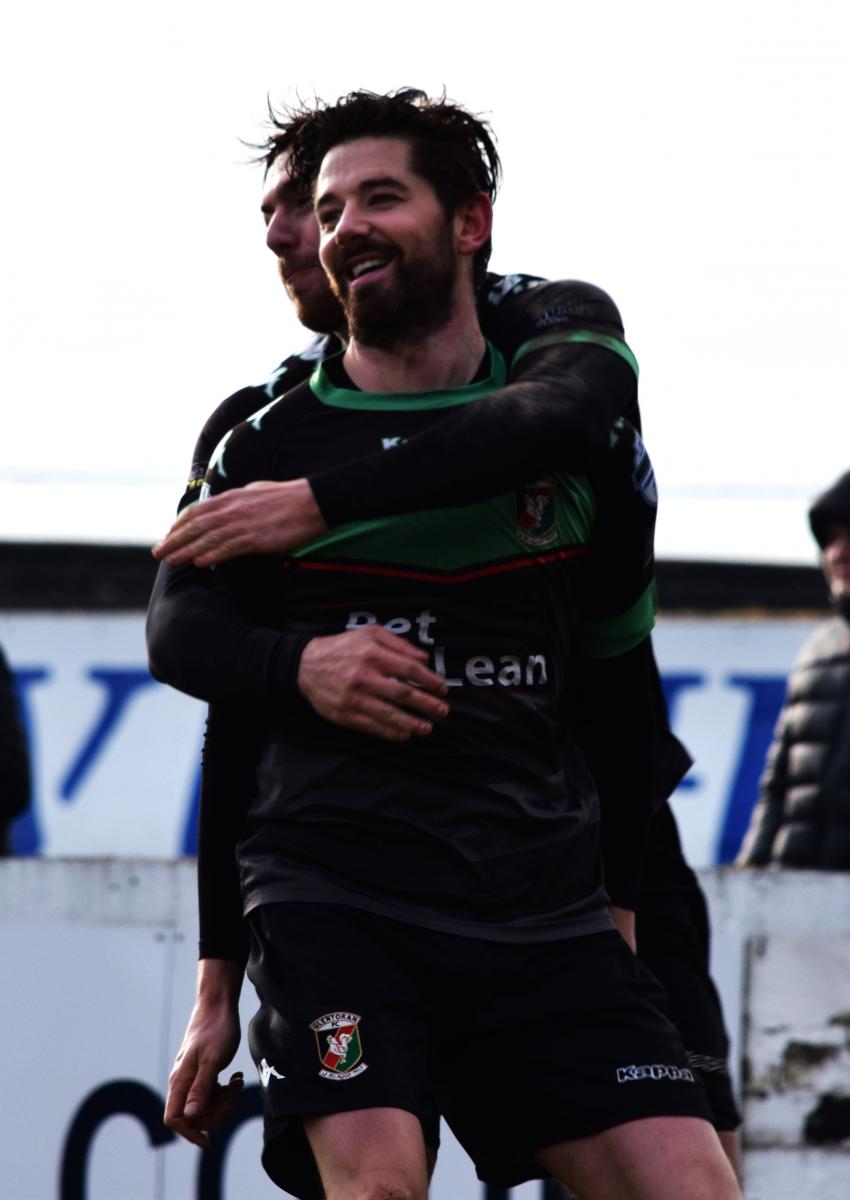 The second half in brightening weather conditions began at a quicker pace with both teams going in search of maximum points. Within a short period Ronnie decided it was time to make a change, with Alex O'Hanlon swapped for John McGuigan in a like for like change. Although never a dirty match, the number of names going into Mr Hunter's book was steadily increasing as both sets of players were playing with total commitment and tackles were becoming somewhat rash. However, the crowd were being well entertained in an end-to- end game, with good vocal support from the travelling fans. 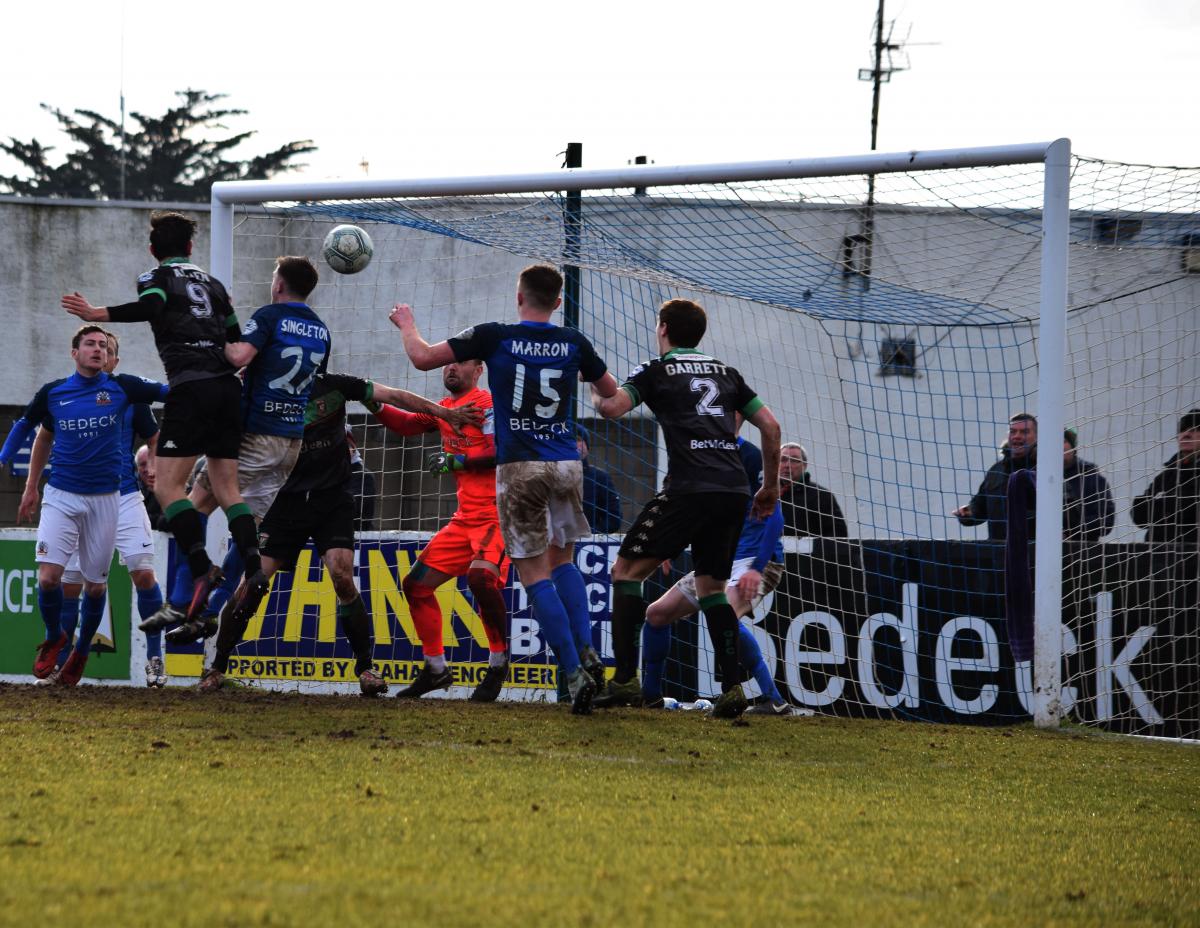 Just as it was starting to look like one of those days when the early goal secures the points, the Glens struck. A deep corner from Ross Redman found Moko at the far post who headed it back across the face of the net for the poacher supreme, Curtis Allen, to nod it into the net. The celebrations had hardly settled down when the Glens were given a throw in following an illegal throw in from Glenavon. The resultant throw found Curtis Allen who turned provider by centring the ball to John McGuigan, who then swivelled on the ball giving him the space to place a fine shot into the net to the stranded keeper's left. It was now frantic action with the home team pressurising hard for an equaliser. In the dying minutes of the game when it was starting to look like Ronnie's hat trick of wins would happen, a speculative long kick into the box from the right found Mark Griffin. He nipped in in front of the advancing Morris, with the resulting looping header ending up in the Glentoran net. Although a 2-2 final score after a frantic finish always seems disappointing, on reflection it was probably a fair result bearing in mind Glenavon's first half performance. It was a good resilient performance by the Glens and they totally deserved the applause of the crowd at the end of the match. 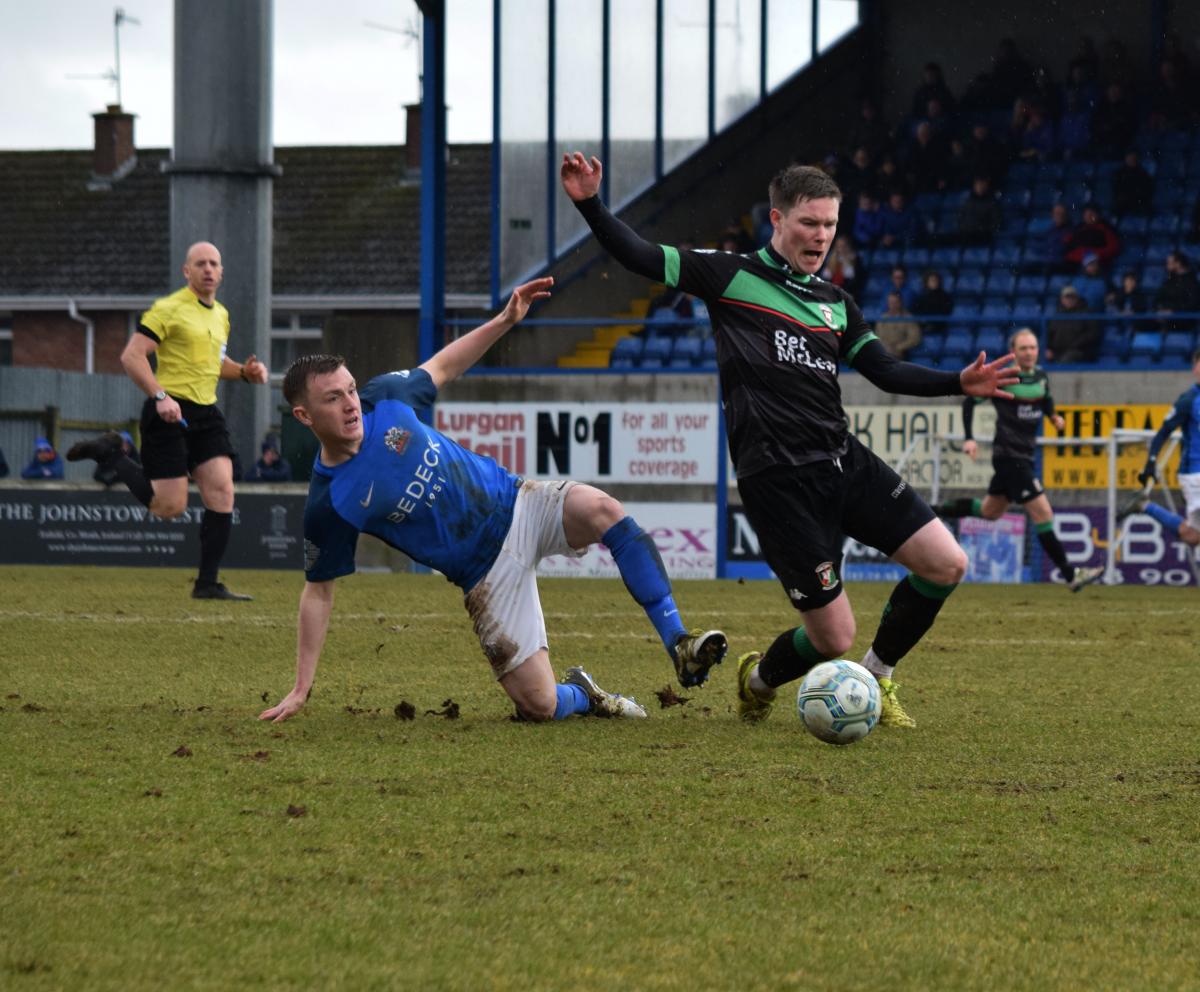 With Ballymena going down to Coleraine, a top six finish is still very much on the cards. We have a very difficult week coming up; the important away Tennents Irish Cup match at Coleraine and next Saturday's Danske Bank match away to Linfield. The team should be in a positive and confident frame of mind though. C'mon you Glens! 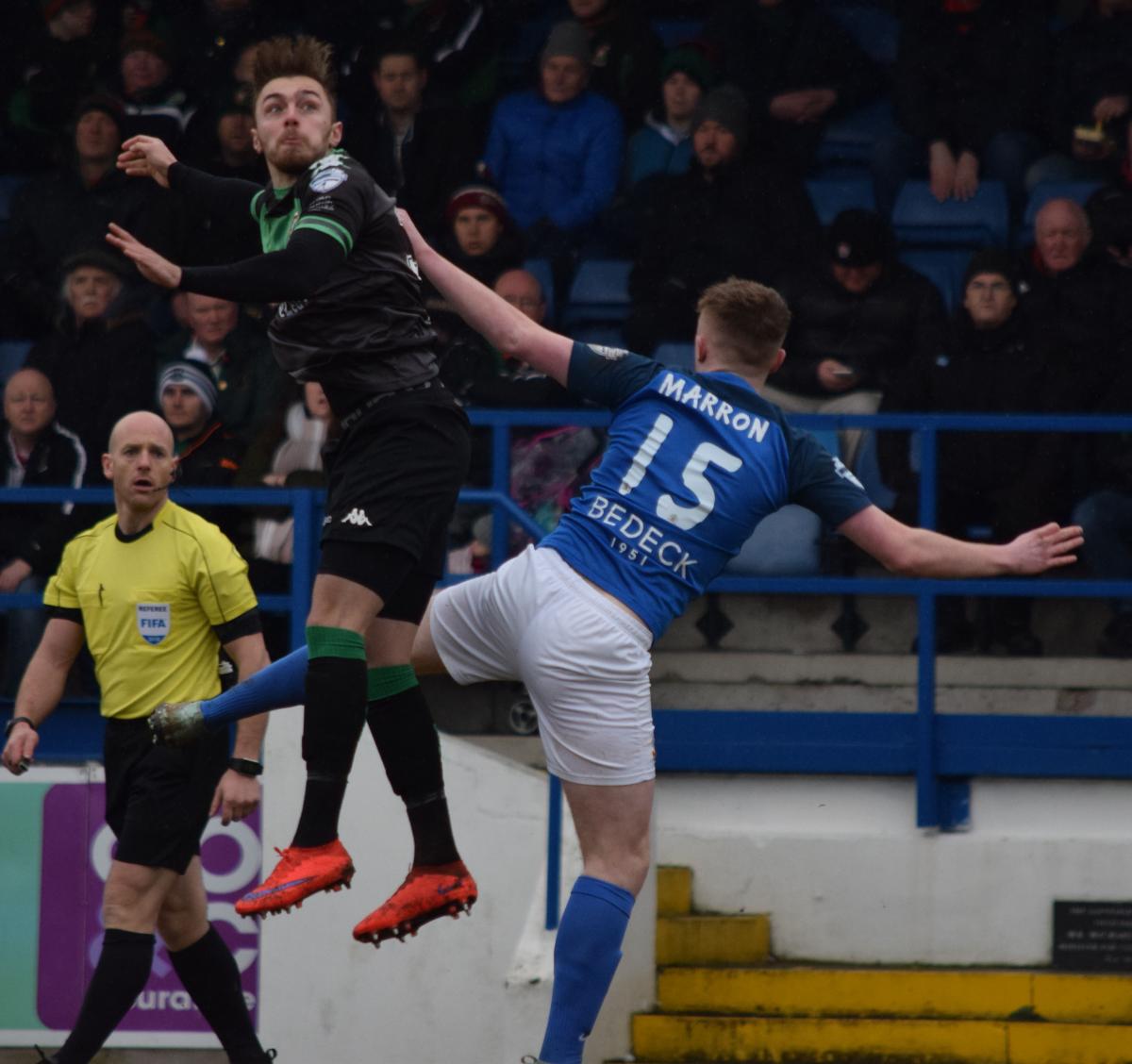 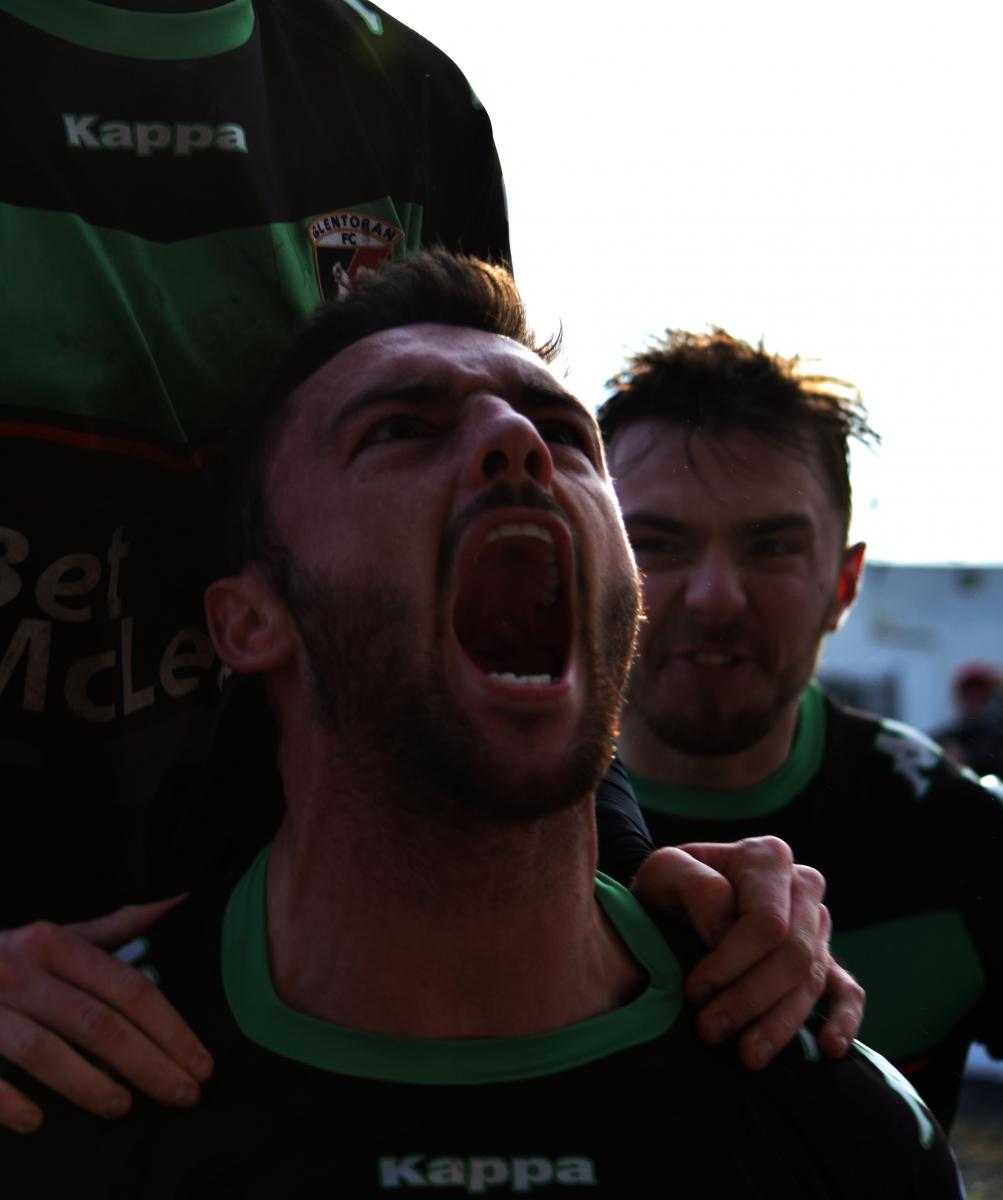