The teams came onto the pitch today with an announcement from the Glenavon tannoy in recognition that today marked Elliott Morris’ incredible 700th match for Glentoran, a full 16 years after making his debut. Elliott was offered the captaincy to mark the landmark but declined as he felt the team was more important than any personal milestone. A fantastic attitude from a true Glentoran legend. 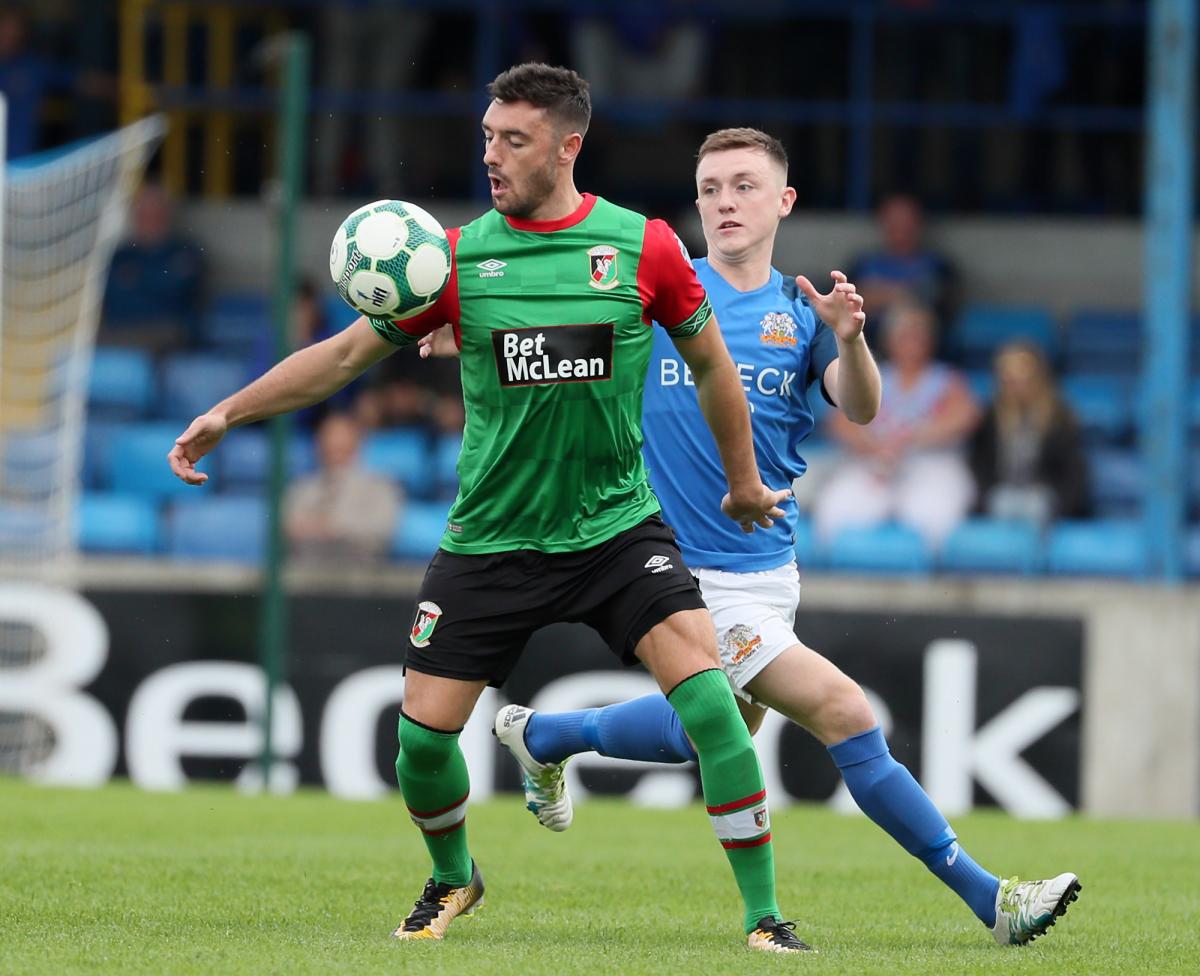 To the match itself. Glentoran can consider themselves again unlucky not to have come away with all three points from a game in which we performed strongly throughout. The starting line up saw Stevie Gordon, Joe Crowe and Robbie McDaid all keep their places after Tuesday’s win over Larne. Curtis Allen was back in the starting line up while this week’s new signing John Herron started alongside Crowe in central midfield with captain Marcus Kane playing wide left and John McGuigan on the right in a classic 4-4-2 line up.

The Glens started strongly with a first minute teasing corner from John McGuigan not getting a touch and McGuigan then having a shot deflected over after a great attacking move. In the third minute the Glens appealed for a penalty after a defender appeared to handle in the area then three minutes later a Calum Birney also went close.

In 18 minutes Marcus Kane went down with a head knock after a clash with former Glens player Aaron Harmon that went unpunished by the referee. Two minutes later with the Glens still on the offensive, Calum Birney just failed to get a touch after a John McGuigan flick on from a Redman corner. 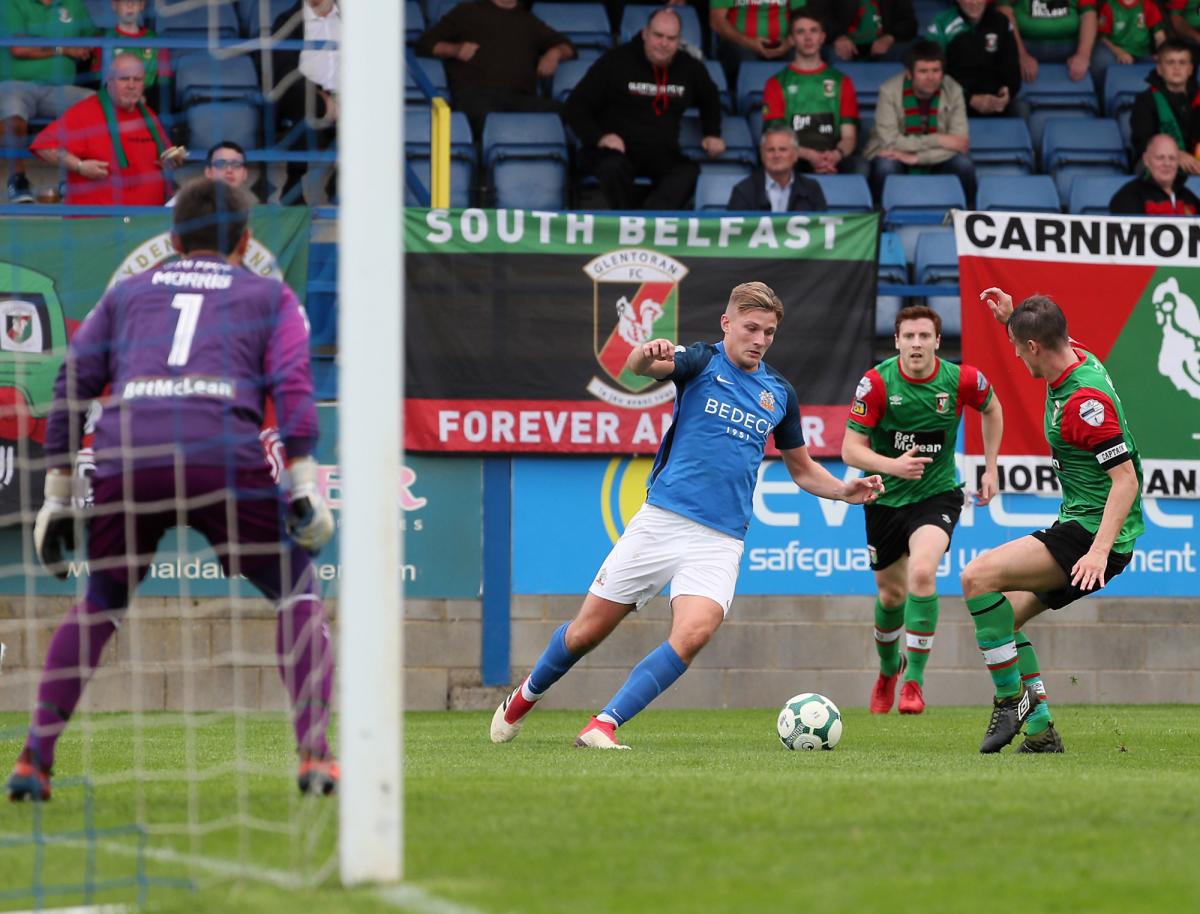 After 28 minutes Birney became the first of an incredible number of bookings today for an incident in the Glentoran area while the ball was out of play before a Glenavon corner. Glenavon’s Dylan King was then booked for a professional foul as Glentoran broke quickly from the corner. Glenavon then had their strongest chance when another former Glens player, Andy Hall, headed just over from a controversially awarded corner.

On the half hour John Herron had a shot on target but it was superbly blocked by Glenavon’s young centre back Coalan Marron who was superb throughout. The first half ended scoreless after a fantastic block tackle on Mark Sykes who had made a brilliant pitch length solo run. 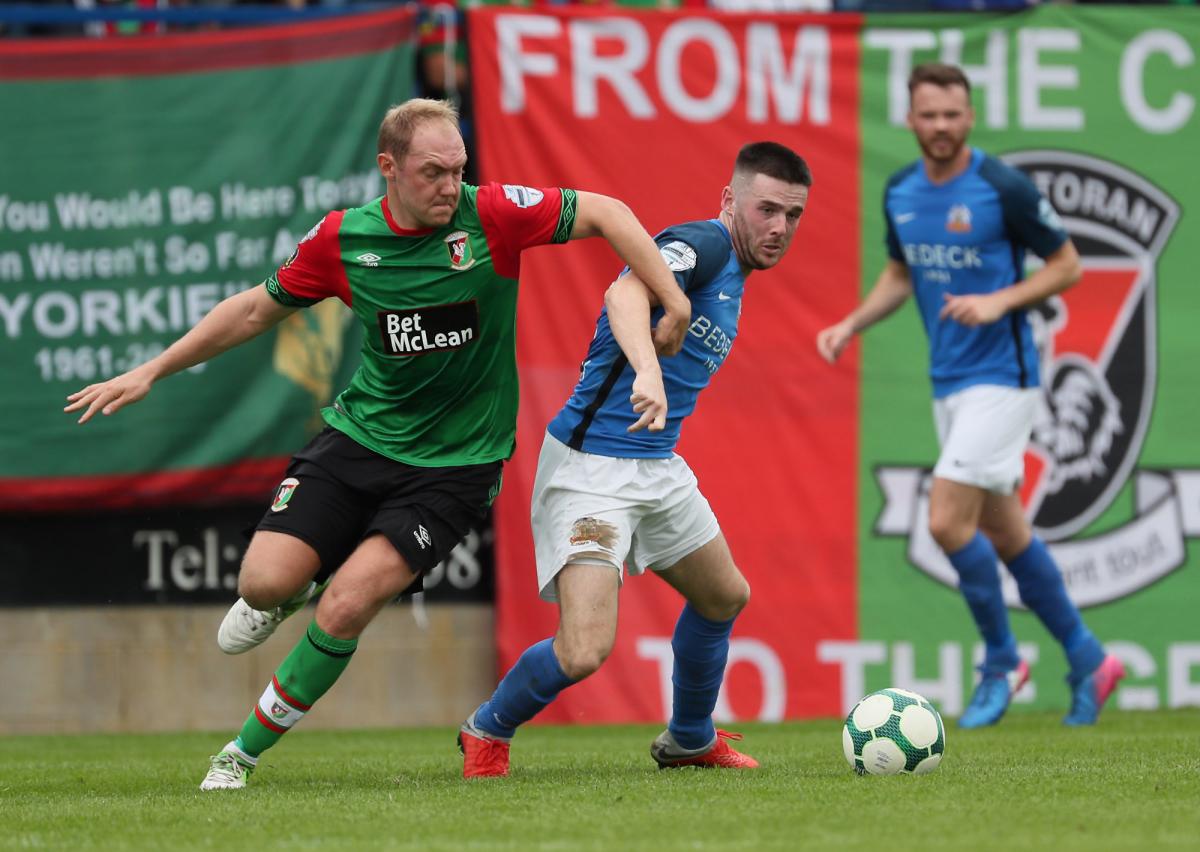 After the break Glenavon made what was to be a significant substitution with Stephen Murray replacing Stephen Donnelly upfront. The Glens were unchanged.

The first booking of the half came after 52 minutes when Marcus Kane made a cynical foul on Rhys Marshall. Harmon was then cautioned for an even more cynical foul on the breaking John Herron. Andrew Mitchell was then booked for an elbow on Willie Garrett outside the Glentoran penalty area – a decision not well received in the home stand.

On the hour the Glens took a deserved lead. Stevie Gordon did very well to win a corner and from the resultant Ross Redman ball, Robbie McDaid rose well above the Glenavon defence and keeper Tuffey to firmly head home from the six yard line. This was Robbie’s fourth goal in as many games against his old club and he had no difficulty celebrating the fact! 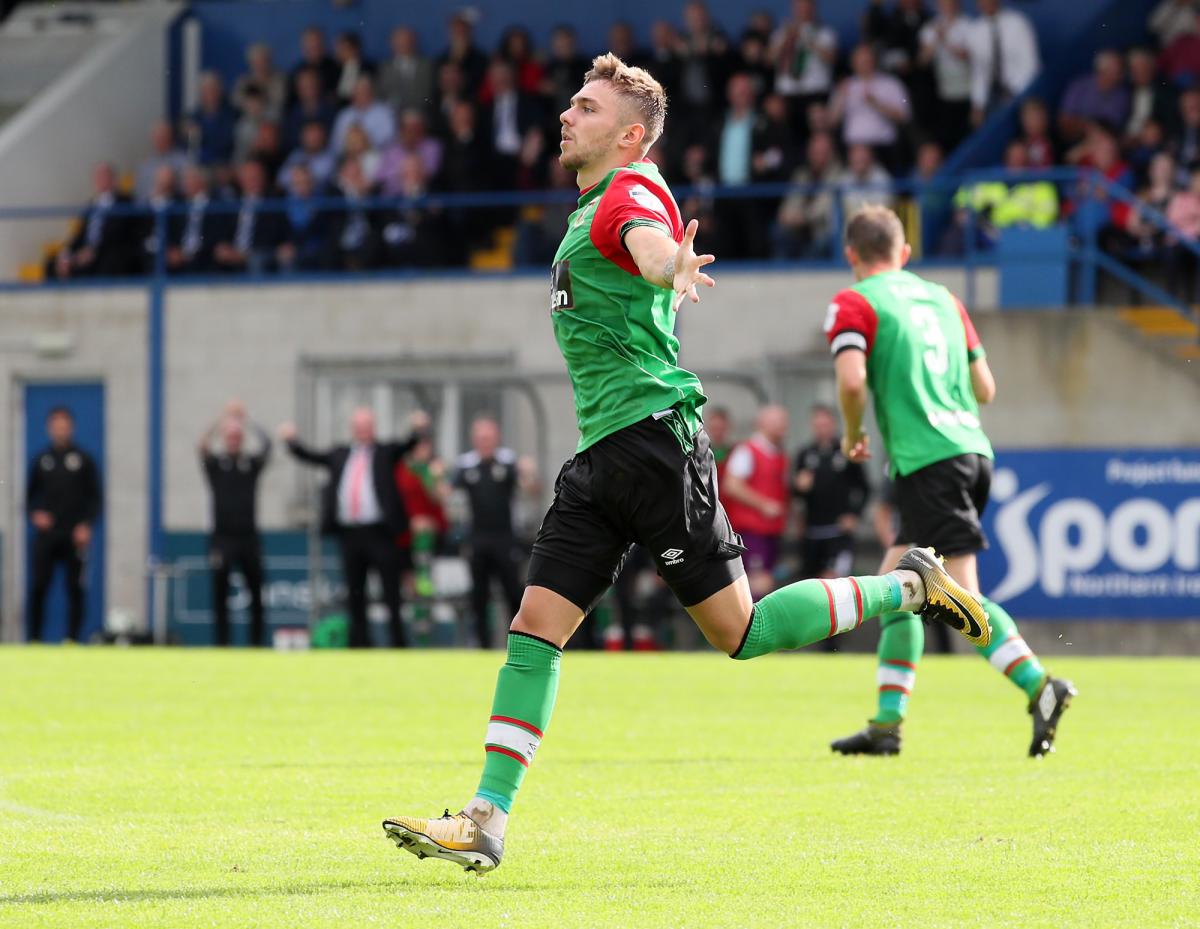 Glenavon immediately replaced Harmon with on loan Derry City player Ben Doherty and two minutes later John Herron – who had put in a very good shift in his first game of the season – was replaced by Dylan Davidson who took up his familiar place on the left side with Marcus Kane moving beside Crowe in the middle.

After 64 minutes Andrew Mitchell was inexplicably not given a second booking for a similar incident to his previous booking, again involving Willie Garrett. This decision by referee Keith Kennedy was to have almost inevitable implications three minutes later when Mitchell went down following a defensive mix up in the Glentoran box. To be fair Mitchell did not appeal for the penalty and instead got up quickly and tried to keep possession moving towards the goal. However the referee adjudged Willie Garrett to have pushed Mitchell and awarded a penalty. It looked soft as it appeared on TV highlights that there was straightforward shoulder to shoulde3r contact between the players. However either way it was an unnecessary challenge by the otherwise excellent Garrett as the ball didn’t seem to be in a particularly dangerous position and also Elliott Morris seemed to have it covered. Substitute Murray scored the penalty with relative ease to level the score at 1-1. 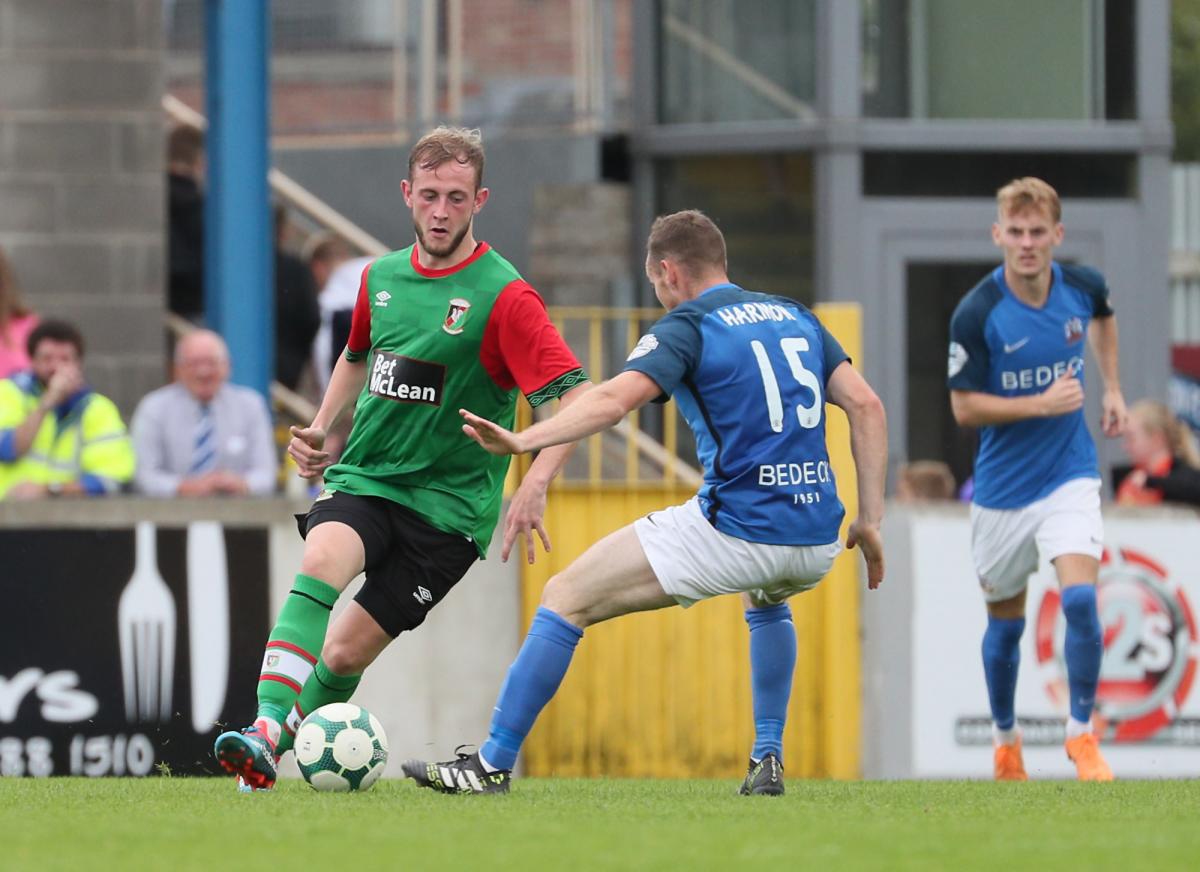 In the 72nd minutes Mitchell was replaced by Jordan Jenkins upfront for Glenavon. Soon afterwards a great counterattack and pass from Curtis Allen found McDaid who shot just over. Joe Crowe was then booked for what looked a clean tackle on Jenkins. Immediately afterwards Elliott Morris made a very brave stop from Jenkins with feet flying from both teams in the Glens’ six yard box, Allen was then replaced by Sam Byrne,

Glenavon had a couple of effective attacks approaching the end of normal time. First Sykes was very unlucky with a long range shot after a brilliant turn then Stevie Gordon made another outstanding tackle to end a quick Glenavon counter attack. On the blow, Peter McMahon came on for John McGuigan who had worked tirelessly and effectively all afternoon.

The tannoy announced six minutes injury time. A couple of late Glenavon attacks were blocked by Birney and Kane while both McMahon when put through by Byrne and Davidson with a great burst of pace and shot could consider themselves unlucky not to have scored what would have been a deserved winner. The final incident of the day say Andy Hall booked – again debatably – for a foul on Redman. This was the seventh booking in what was not a dirty game. 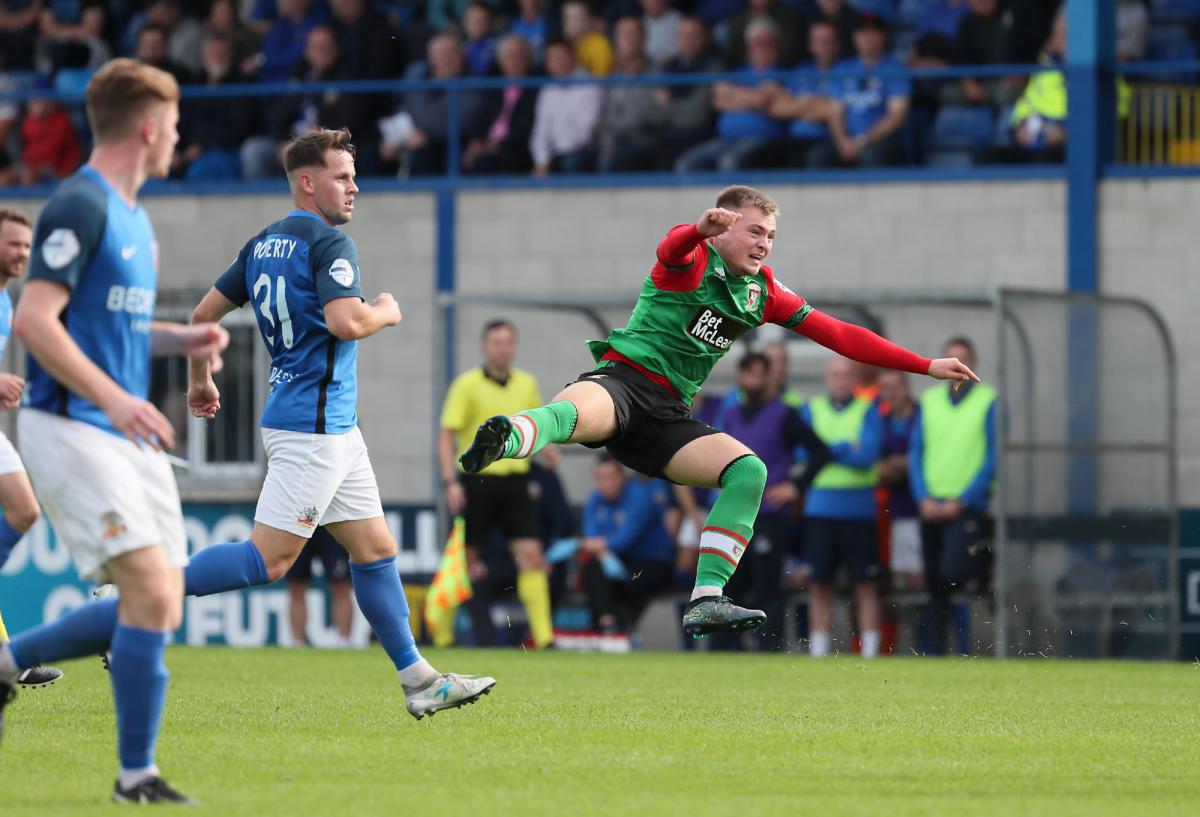 In conclusion this was another game where the Glens can feel disappointed not to have come away with full points after a strong performance. But supporters can feel comfortable that this did not look like a match between two teams separated by 18 points last season. With Conor Pepper to come back for Friday’s home match with Newry City and the other new players to settle in over the coming weeks we have a much stronger, well organised look about us that can give supporters a level of encouragement and optimism for the months ahead.

The day also marked another milestone as it was Ronnie McFall’s 300th match as Glentoran manager over two spells at the club. With Paul Leeman, Gary Smyth, Jason Hill and Gary Hamilton in the respective dugouts the management teams today had a collective 1,649 Glentoran appearances between them! 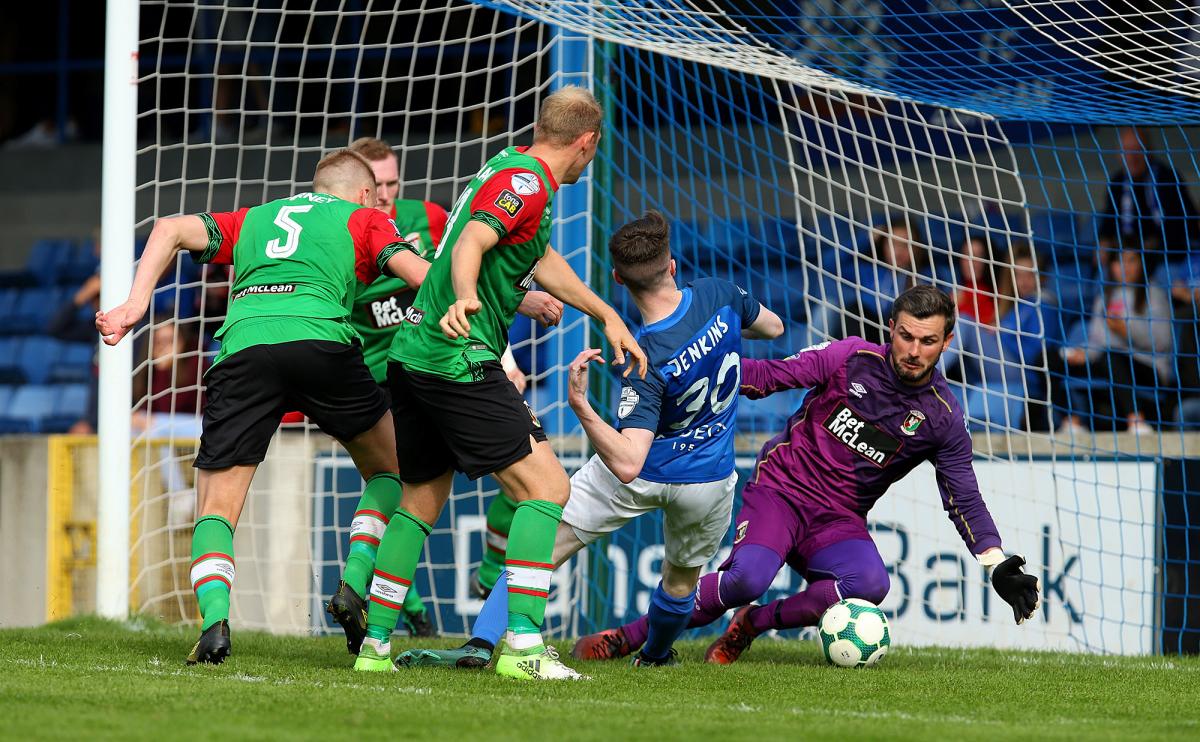 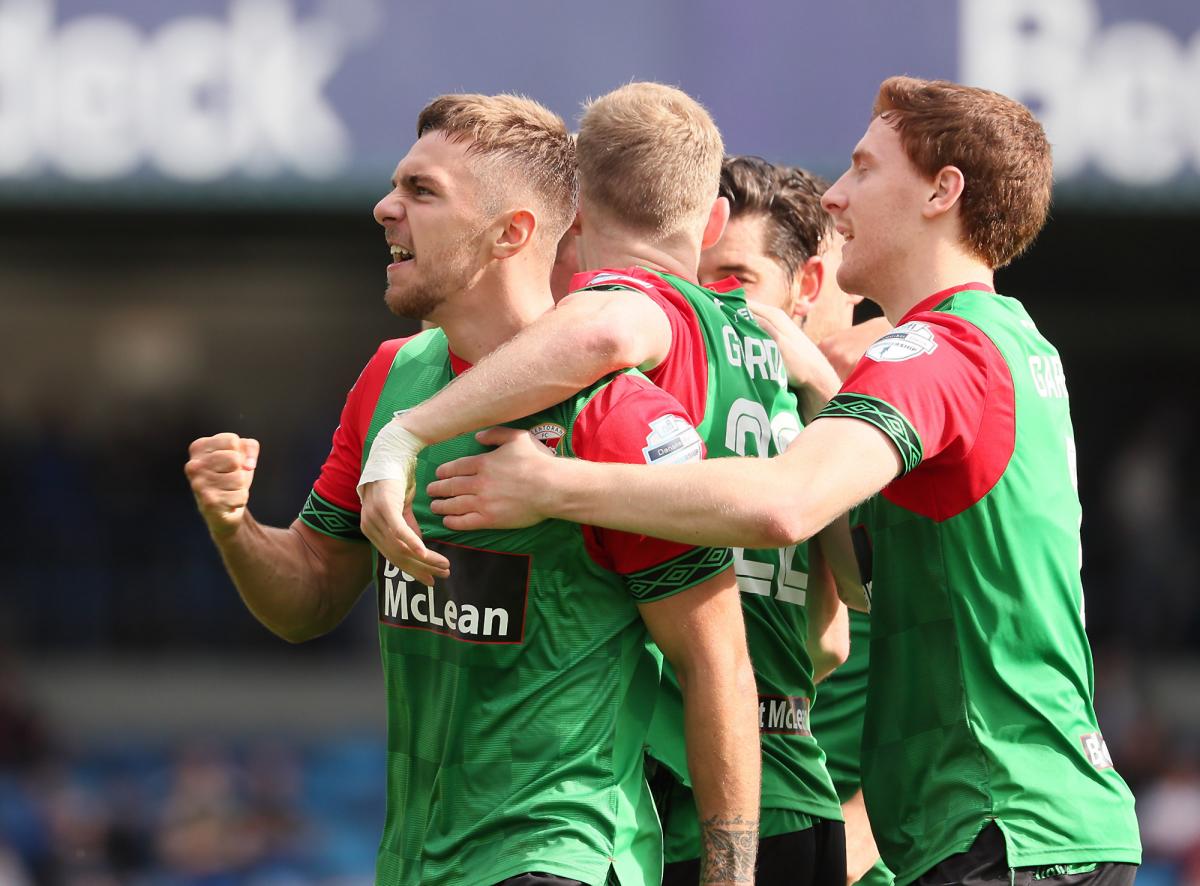