Glentoran were forced to dig in and grind out a result at Stangmore Park this evening against a well organised and energetic Dungannon Swifts side. 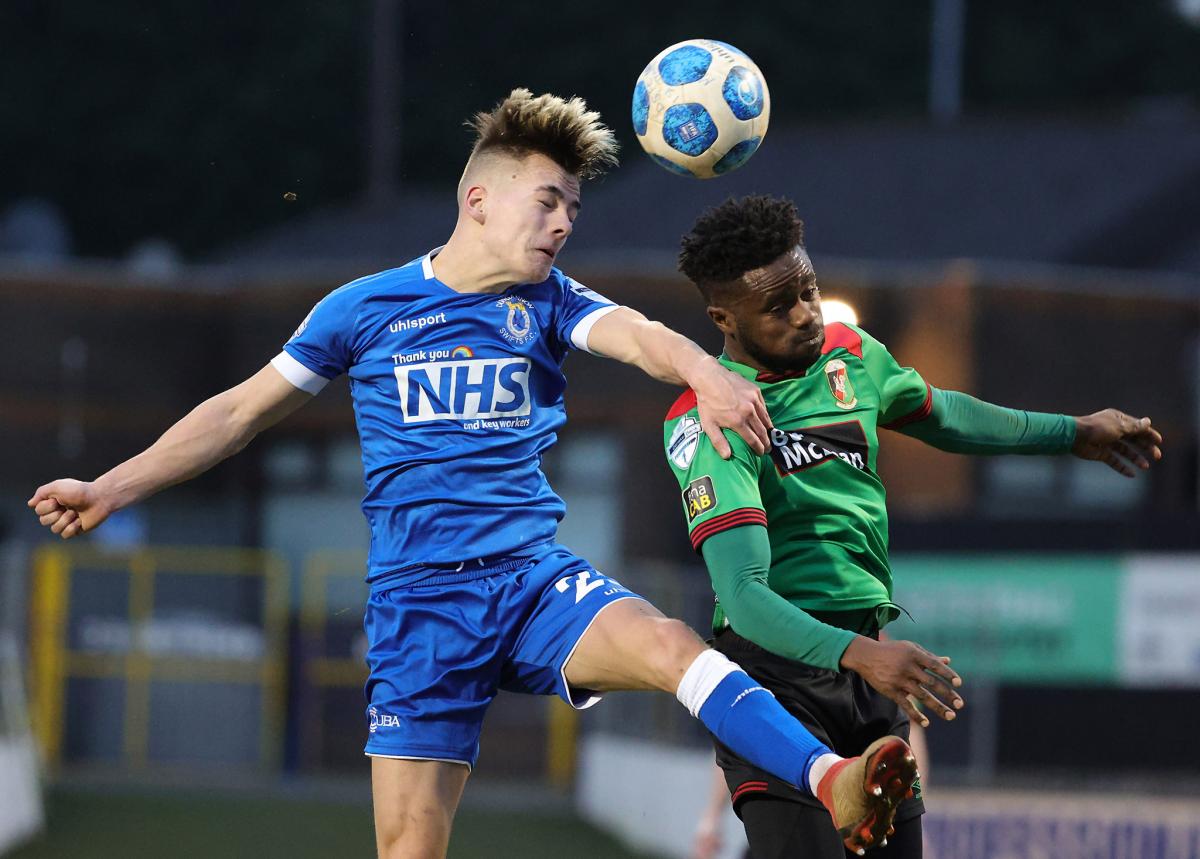 Manager, Mick McDermott made several changes to the side which triumphed over Linfield at the National Stadium last Tuesday evening. Rhys Marshall dropped into the right-back position whilst the entire midfield was changed with Ciaran O'Connor, Gael Bigirimana and Dale Gorman all in the starting XI. Ruaidhri Donnelly replaced his brother Jay in attack alongside top goalscorer, Robbie McDaid and Conor McMenamin. 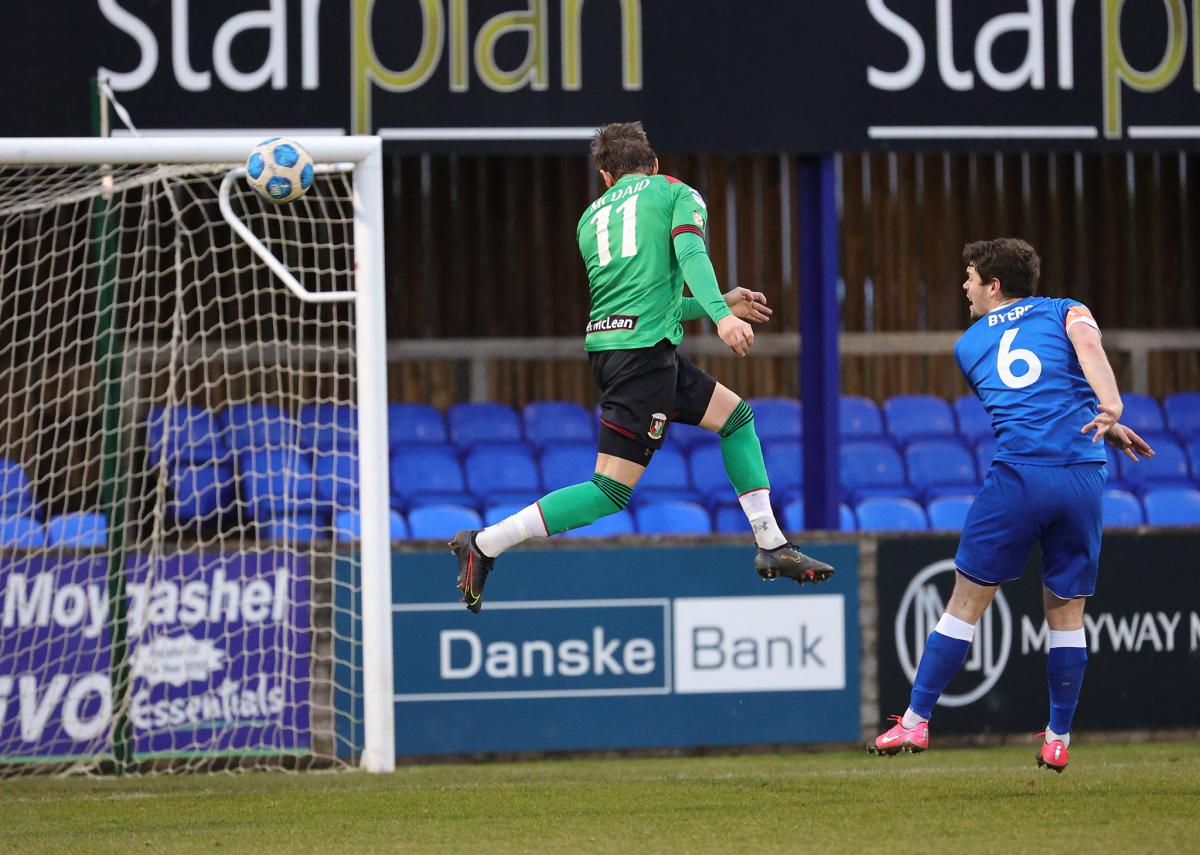 The first chance of the game fell to the home side with 7 minutes played. A clearance from Dale Gorman was intercepted and Terry Devlin's 25-yard effort had to be tipped over the bar by an alert Dayle Coleing. The Glens' first opportunity fell to Robbie McDaid. A long throw in by skipper, Marcus Kane was nodded on by Ruaidhri Donnelly but McDaid's header was straight at veteran keeper, Roy Carroll. The Glens then had two further chances in quick succession; Conor McMenamin fired straight at Carroll and then Dale Gorman tried his luck from just outside the area but dragged his shot wide of the post. 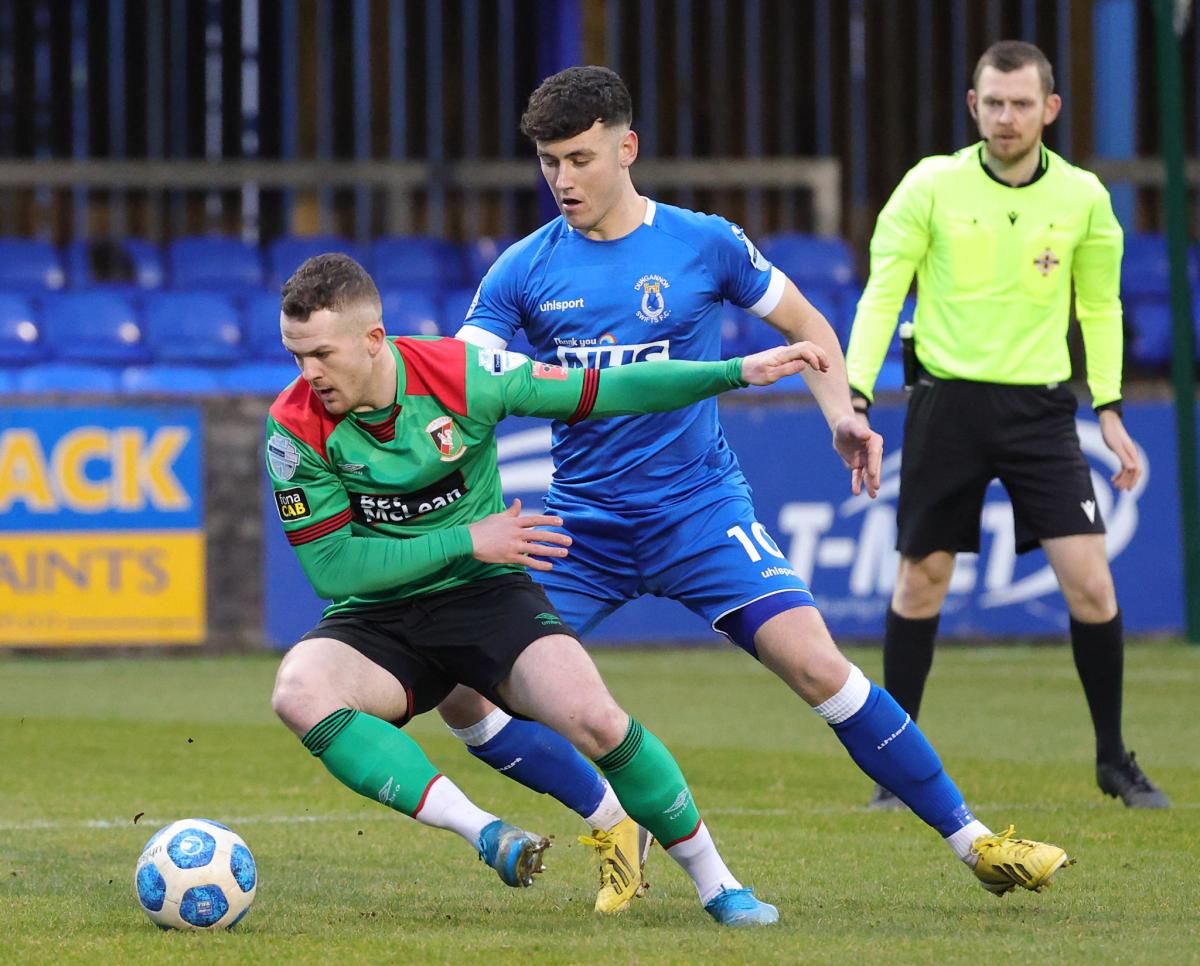 Just before the quarter hour mark McMenamin's cross was met well by McDaid but his header flashed wide of the goal. Midway through the first half another long throw-in from Kane was again nodded on by Ruaidhri Donnelly but the ball deflected behind for a corner. Moments later a ball from Dale Gorman picked out Ruaidhri Donnelly who controlled it well before firing a shot on goal which Roy Carroll did well to keep out. On 28 minutes Dungannon Swifts won a corner which was met by Terry Devlin but his header failed to trouble Coleing. On 31 minutes another chance for the Glens, this time created by the excellent Rhys Marshall. Marshall drove in from the right before picking out Robbie McDaid. McDaid caught the ball perfectly but his fierce shot was blocked by the Swifts' defence. 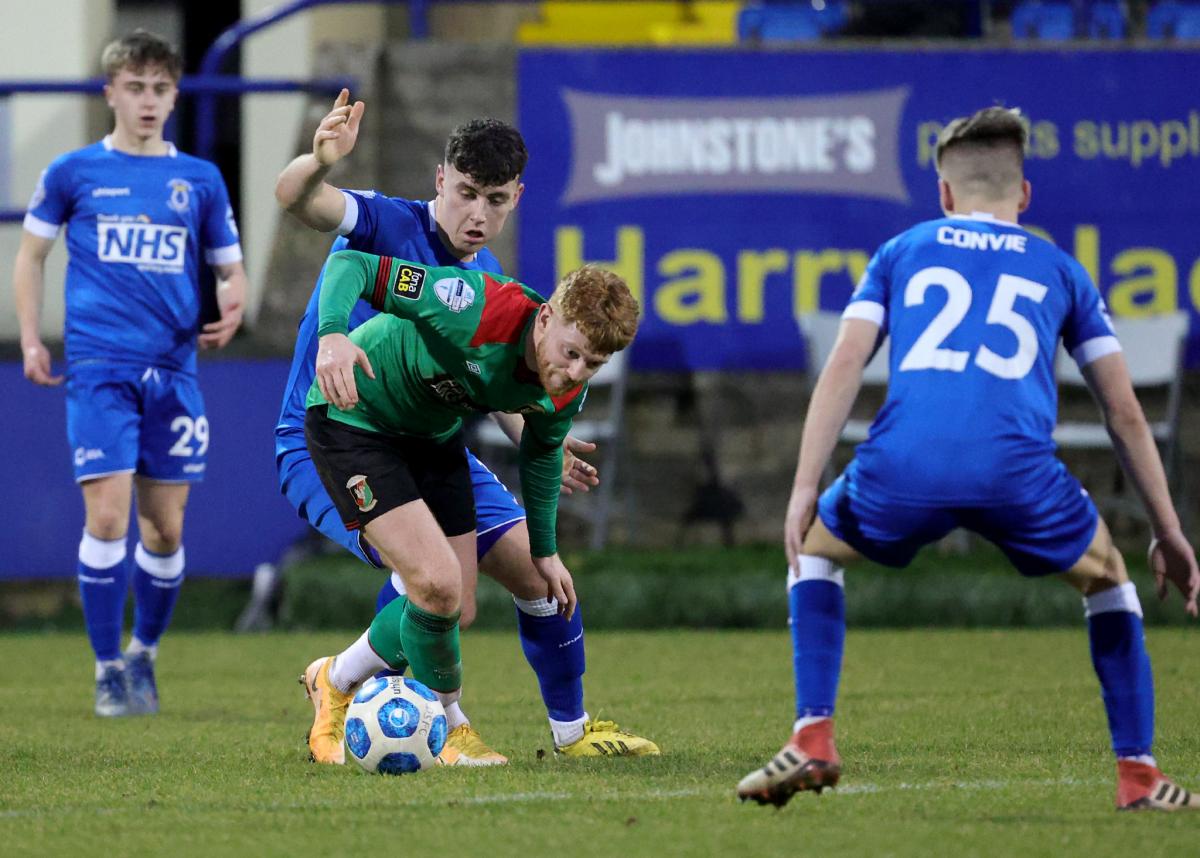 On 44 minutes Ciaran O'Connor drove past a couple of defenders on the left before pulling the ball back for Dale Gorman. Gorman took a touch when striking the ball first time may have been the better option and his effort was well blocked. The Glens weren't to be denied though and right on the stroke of halftime, went in front. Conor McMenamin played Rhys Marshall away down the right. Marshall took the ball to the by-line before cutting it across goal. It flashed past Carroll at the near post and Ruaidhri Donnelly was there to beat Ethan McGee to the ball and knock it into the unguarded net. 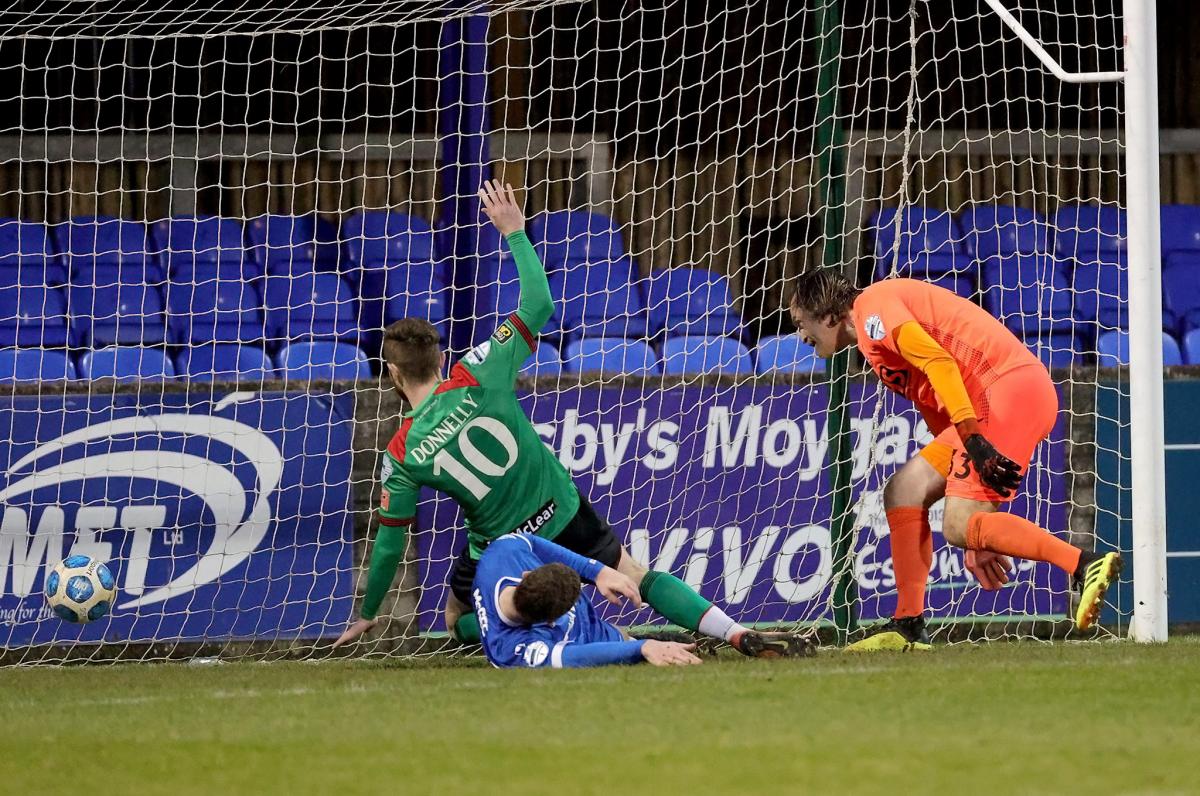 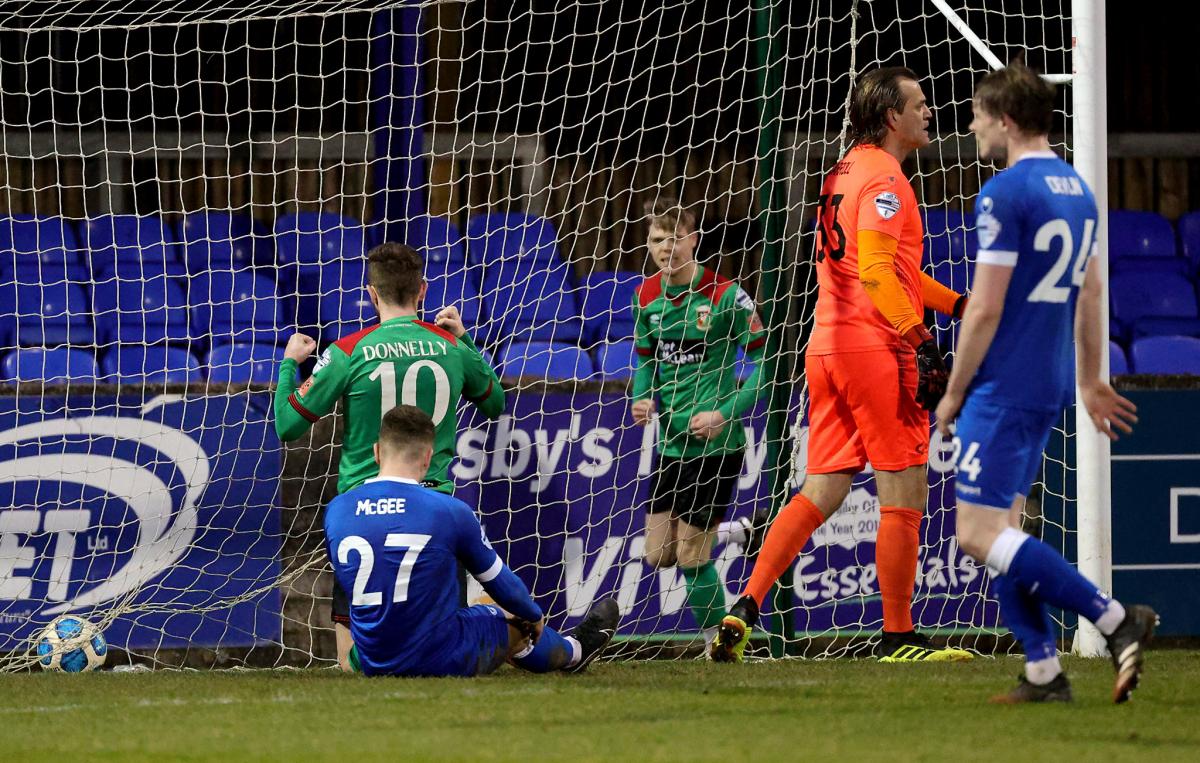 Glentoran almost extended their advantage just 2 minutes into the second half. A long ball forward was superbly controlled by Ruaidhri Donnelly who then set up Dale Gorman on the edge of the penalty area but unfortunately Gorman's shot was blocked. The Glens then had a let off on 49 minutes when James Convie worked space for himself in the area before firing a shot which came off the crossbar and was eventually put out for a corner. Conor McMenamin then had two efforts in the 52nd and 53rd minutes; the first going high and wide of the target and the second getting a deflection off a defender which took the pace off the ball and made the save a comfortable one for Roy Carroll. 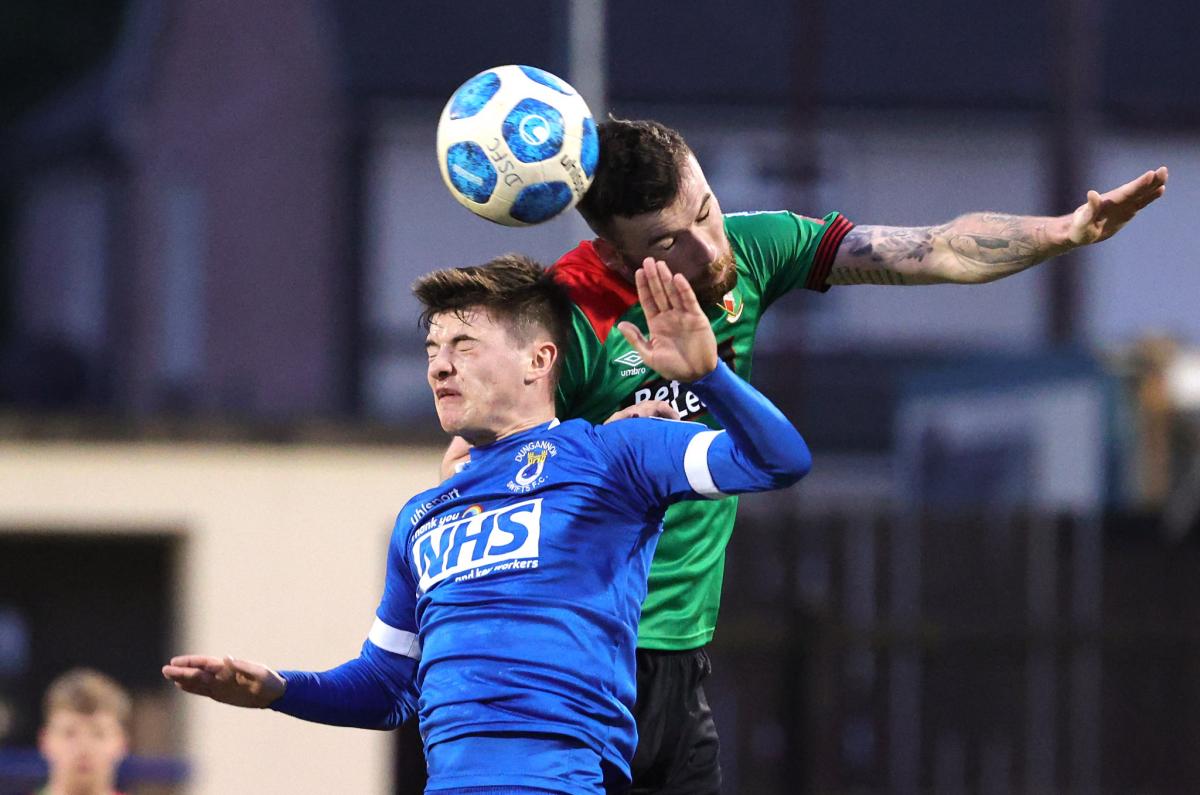 Carroll could only stand and watch on 57 minutes when Conor McMenamin found Rhys Marshall on the edge of the area. Marshall struck the ball beautifully and was unlukcy to see it crash off the underside of the crossbar and be hacked clear. The clearance fell to Marcus Kane but his 25-yard effort was blocked. Glentoran freshened up the midfield with Hrvoje Plum replacing Dale Gorman and Seanan Clucas coming on for Ciaran O'Connor. A Plum free kick on 71 minutes was whipped into the danger area but deflected past the post. On 83 minutes a cross / shot from Ruaidhri Donnelly then went inches past the upright with Carroll flat footed. 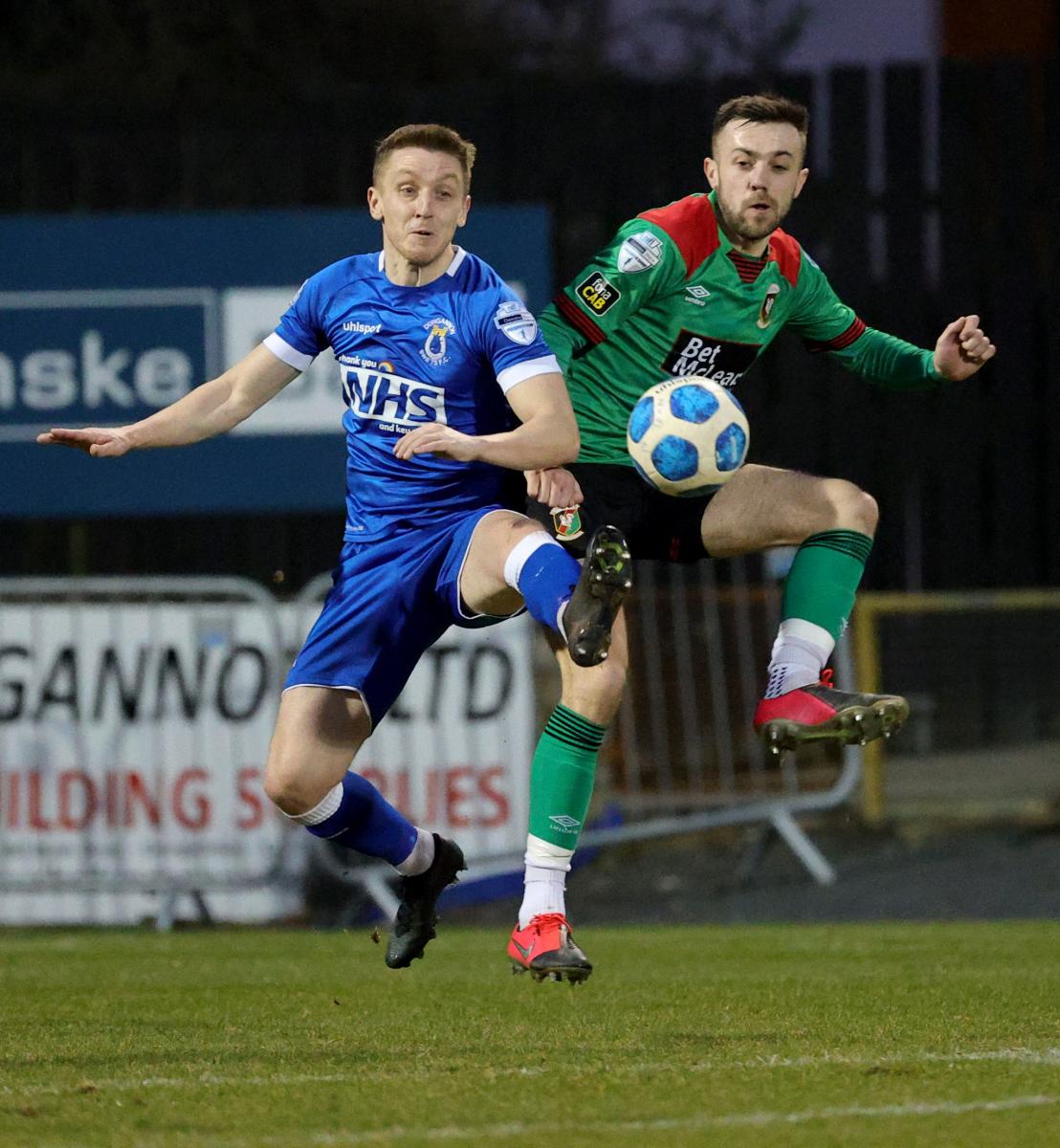 As the game moved into added time a ball played down the right by Rhys Marshall was superbly controlled by Ruaidhri Donnelly. Donnelly then laid the ball off to Hrvoje Plum who struck it goalwards from about 16 yards. Plum's shot looked destined to find the bottom corner but Roy Carroll got down sharply to turn it behind for a corner. As we moved through the 3 minutes of added time Dungannon Swifts went in search of an equaliser but the Glentoran defence, marshalled superbly by the excellent McCullough and McClean, held firm and took all 3 points. 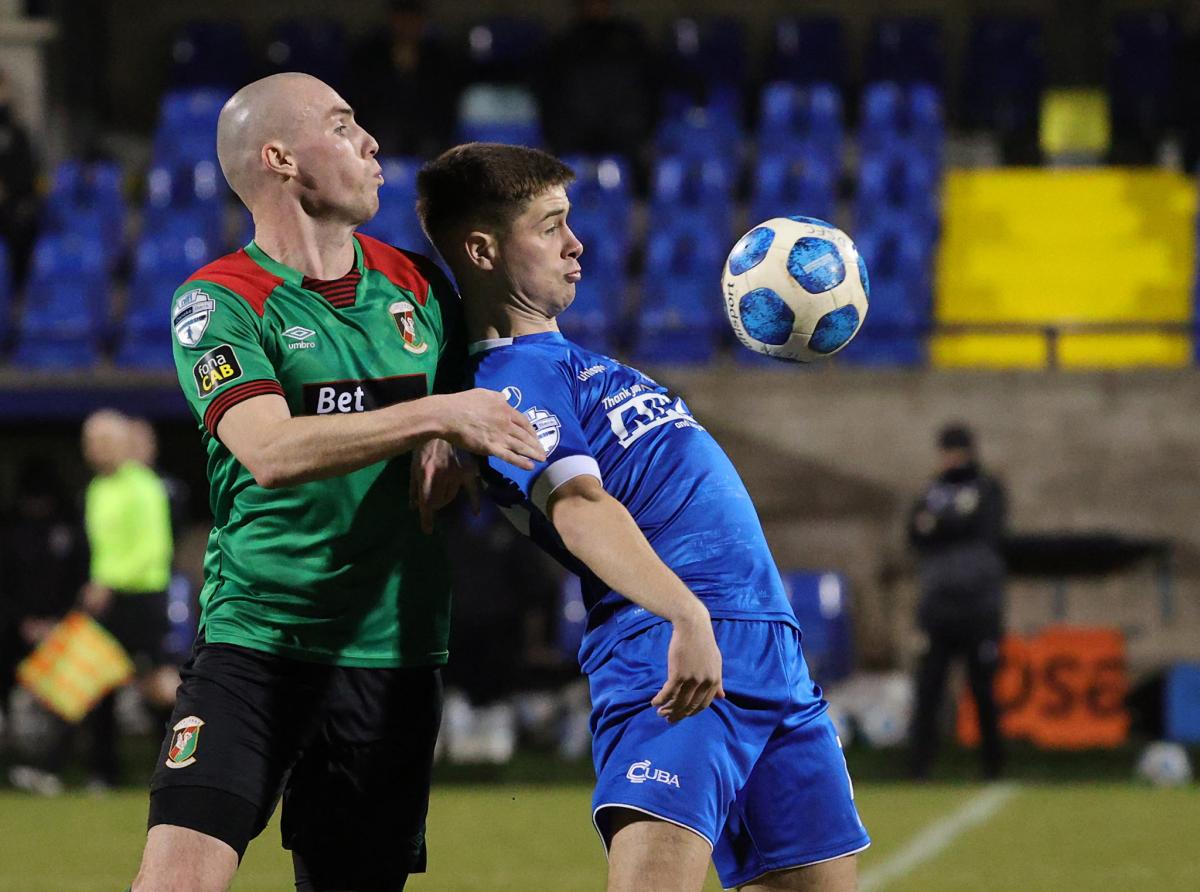 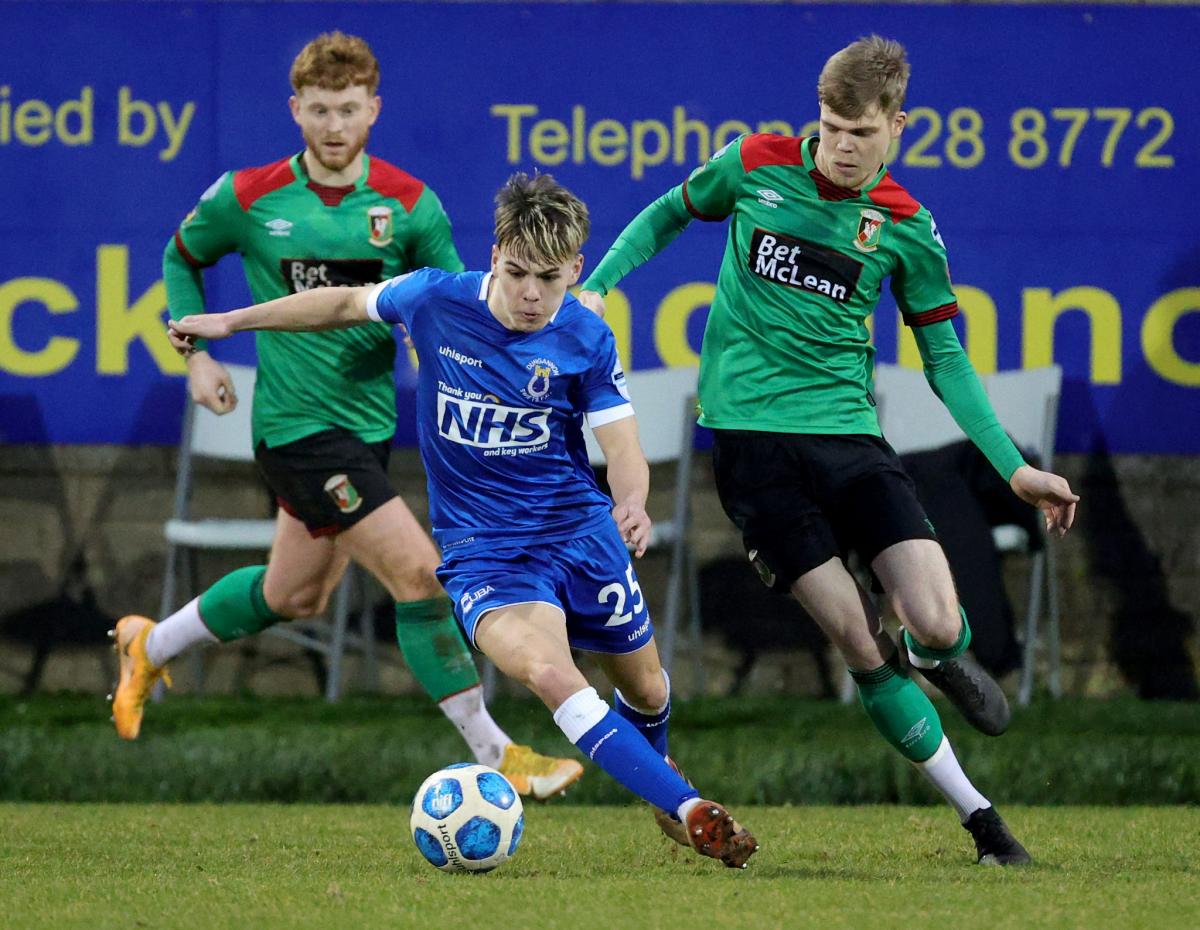 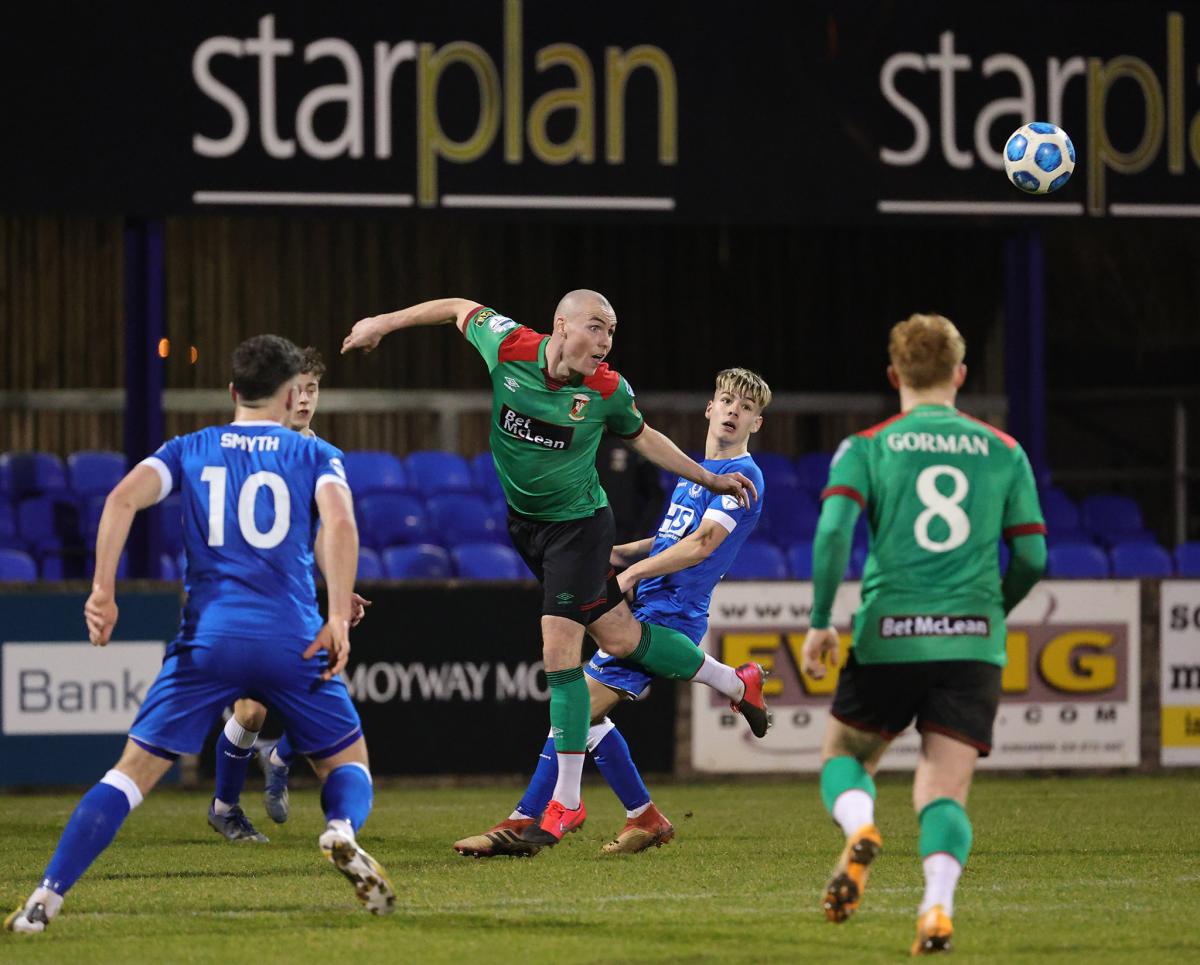 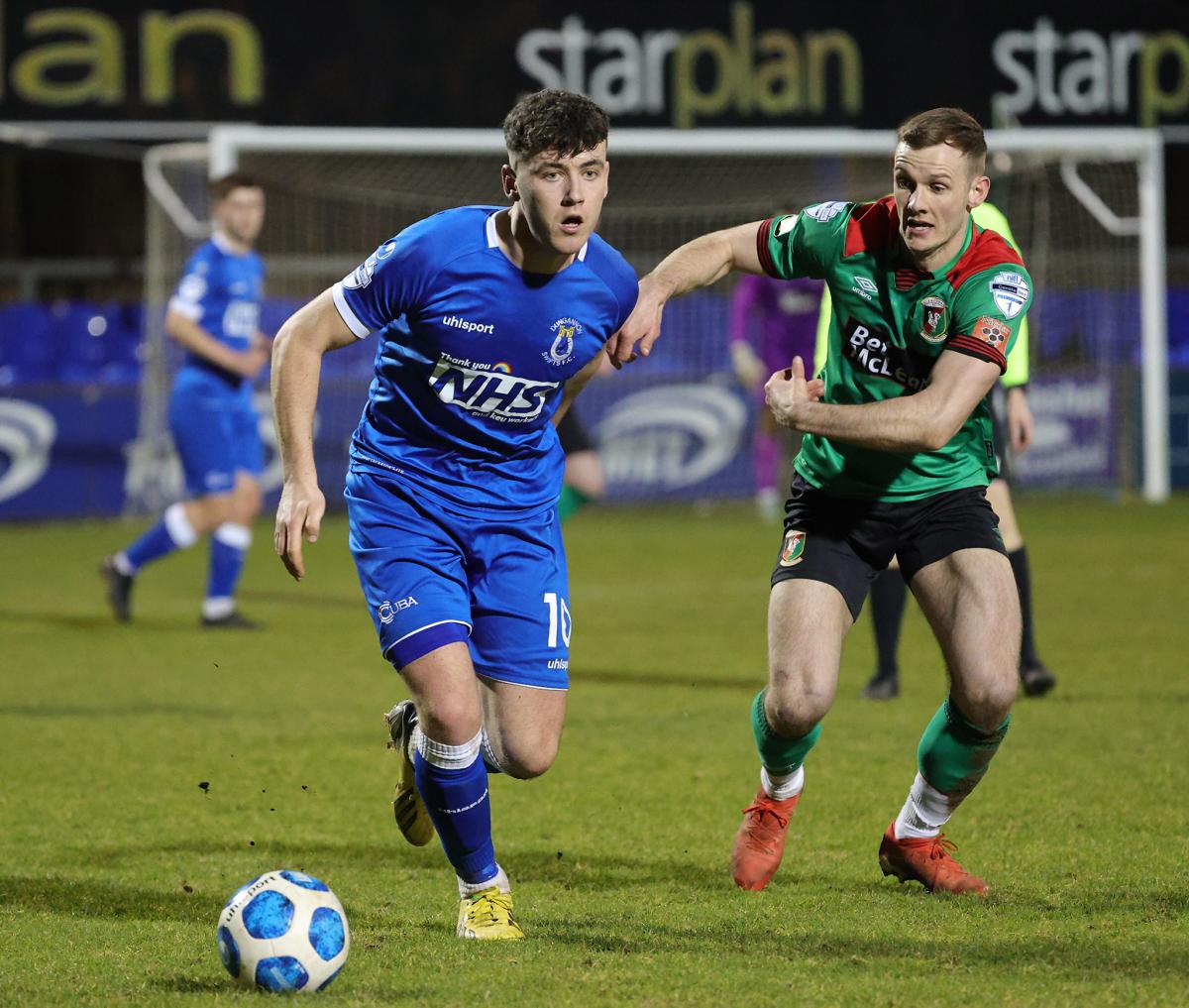