Glentoran made a couple of changes for today's game against Dungannon Swifts at a wet and windy Stangmore Park. Marcus Kane moved into the central midfield slot, vacated by the suspended Mark Clarke with David Scullion occupying the left midfield berth. Coming in at right back was Willie Garrett following his excellent displat for Glentoran Seconds against Linfield Swifts last Saturday.

The conditions made it difficult for either side to play any decent football early on and the game was littered with stoppages which was frustrating for the large crowd. Referee Marshall infuriated the visiting supporters on 12 minutes when he produced a yellow card for Stephen McAlorum for what seemed a fair challenge in midfield. A minute later Mark Miskimmin had the first chance for the Glens when he picked up the ball 10 yards inside the Swifts' half and drove forward before firing just wide. Earlier Matthew JHazely had had a chance for the home side but Elliott Morris turned his shot away for a corner.

Glentoran went in fron on the quarter hour mark. Miskimmin set up Marcus Kane and his effort was turned away for a corner. Jordan Stewart took the set piece and found Willie Garrett who scored from close range. It was his first senior goal for Glentoran. On 19 minutes Marcus Kane, who had scored in both previous meetings against Dungannon Swifts, was off target with a 25 yard drive. Ten minutes later it should have been 2-nil. Aaron Boyd set up Mark Miskimmin. He took the ball around Gareth Buchanan in the Swifts' goal but didn't manage to get a shot on target. Eventually he fed David Scullion but his shot was blocked. Glentoran had a couple more chances to increase their advantage just before the interval; both from free kicks on the edge of the penalty area. First David Scullion's ball into the danger area was headed over by Miskimmin and then Jordan Stewart fired a 20 yard effort into the wall. 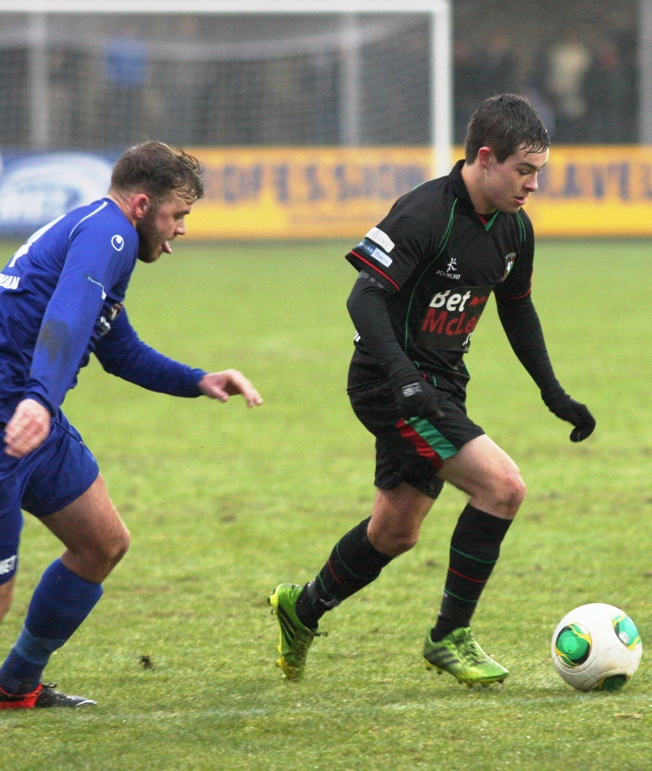 The hard working Aaron Boyd was unlucky not to get on the score sheet on 57 minutes. Boyd raced in on the keeper following a back pass from Adam McMinn. The keeper drove the ball against the striker but it came back off the post. Boyd regained control of the ball and set up Scullion but his shot was straight at the keeper. A minute later Darren Boyce spurned a decent opportunity for the home side, blasting wide from the edge of the box and then on 61 minutes Elliott Morris was relieved to see Jamie Glackin's glancing header from Kris Lowe's cross, go wide of his far post. A long ball out of defence by Morris was flicked on by Aaron Boyd and David Scullion latched onto it before shooting wide. Fra Brennan then tried his luck from long range but his effort on 65 minutes was straight at Morris. Darren Boyce drove a shot across the Glentoran 6 yard area but it was well off target (72) and then a minute later Aaron Boyd picked up a second yellow card and the visitors had to play out the remaining 17 minutes plus stoppage time, with 10 men. Substitute Richard Clarke brought a fine save out of Buchanan whilst at the other end Elliott Morris did well to deny James Costello. Glentoran's keeper, and captain, almost got his first goal for the club with 10 minutes remaining. His free kick, from midway inside his own half, sailed over the Swifts keeper but was inches wide of the post. Morris though will be happy to have recorded his 200th clean sheet as Glentoran custodian and more importantly, travel back up the M1 with another 3 points.