Debutant Lukasz Gwiazda looked like he might have a debut to really remember today until the names Heatley and Owens – so often the scourge of Glentoran and all other Irish League defences – stepped up to bring to an end this season’s dreams of a 23rd Irish Cup for Glentoran at Seaview this afternoon.

Gary Smyth made 3 changes to the starting line up in his first match as Glentoran Manager. In came new signings Darren Murray (up front) and Lukas Gwiazda (behind the front two) while Cricky Gallagher returned to central midfield after five games on the bench. Gallagher played between Conor Pepper and John Herron in what was initially a 3-5-1-2 formation with Joe Crowe playing beside Calum Birney in central defence with Willie Garrett benched. The Manager and Assistant Manager Paul Leeman were given a very warm pre match welcome by the fantastic Glentoran support that all but filled two sides of the ground, creating a great atmosphere.

There were two main talking points in a hard fought and even first half where the Glens never looked in trouble and created the two best chances – a great ball from Conor Pepper from which Curtis Allen shot over (22 mins) and a big chance slipped past the keeper but just past the post by Darren Murray from an Allen nod down. First talking point came in 23 minutes when John Herron was stretchered off to be replaced by Steven Gordon. John was fouled by Ronan Hale just outside the Glens’ penalty area but apparently as he fell his face connected with Jordan Owens’ knee. There was no malice from Owens but a freak accident that left Herron with a bloodied face and possibly concussion. The Glens were then forced to switch to 4-4-2 with Gordon and Gwiazda on the two flanks. 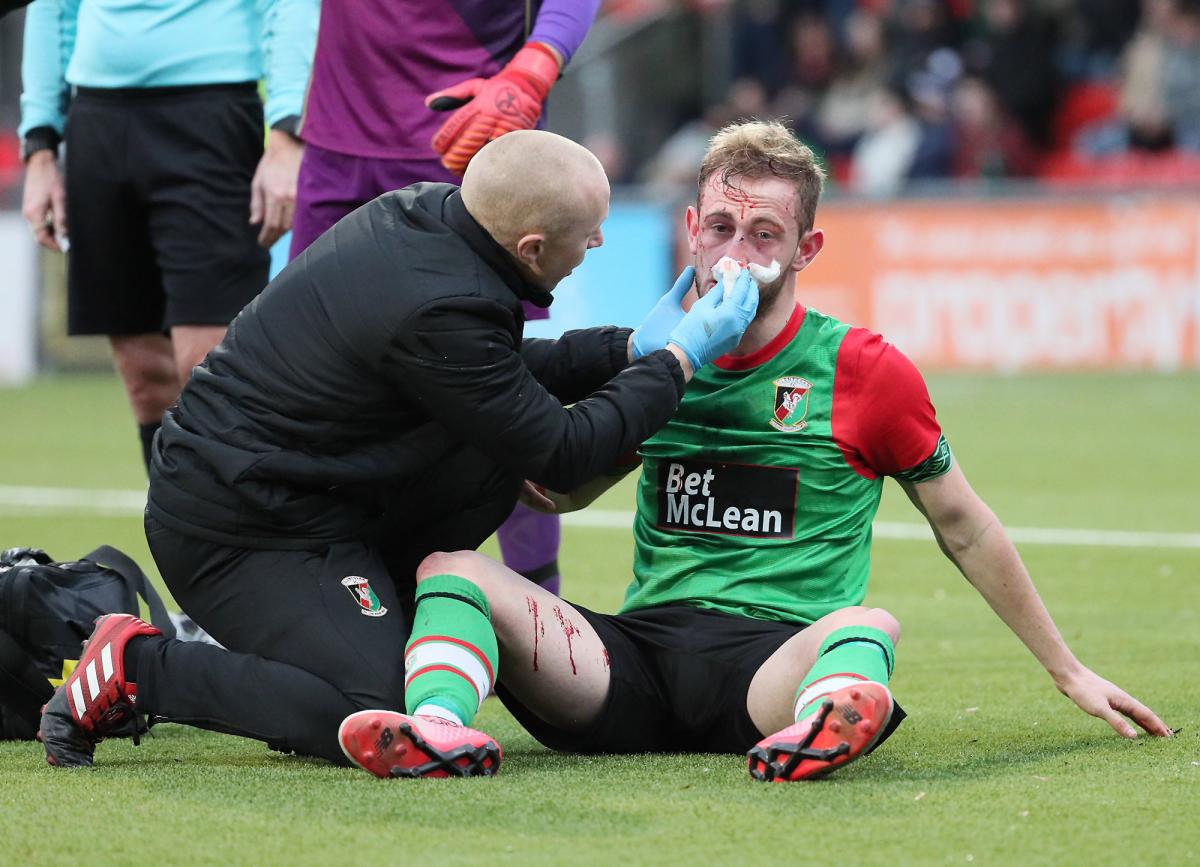 The second talking point was the leniency of the referee. It was a robust rather than dirty first half but Crusaders’ new signing Ronan Hale in particular was very lucky to escape punishment after at least four challenges worthy of a yellow card. To be fair we couldn’t have complained if Steven Gordon had been booked for a petulant reaction when fouled just before half time.

The goalless first half wasn’t to be repeated.  The sign of a change were first shown immediately after half time when Elliott Morris made a great, point blank save when Jordan Owens broke through. The deadlock was broken after 52 when Ross Clarke got an unchallenged cross in from our left flank which went unchallenged across the Glens’ box to find Paul Heatley unmarked so the smallest man on the pitch was able to head unchallenged to Elliott Morris who parried it for Heatley to make sure. The original header may have crossed the line but in every way both the creation and execution of the Crues’ opener was very typical of our season.

We needed the team to show character at this point and they did exactly that a minute later. A long Ross Redman free kick was headed on by Calum Birney to Curtis Allen on the right of the area. Allen’s shot across the goal looked to be going wide until Lukasz Gwiazda stepped forward to head firmly into the Crusaders net.  What a debut for the new boy in his first match at this level. A debut that showed plenty of promise with his workrate, physical presence and comfort on the ball impressing the away crowd. He was later booked for a shirt pull on Rodney Brown. 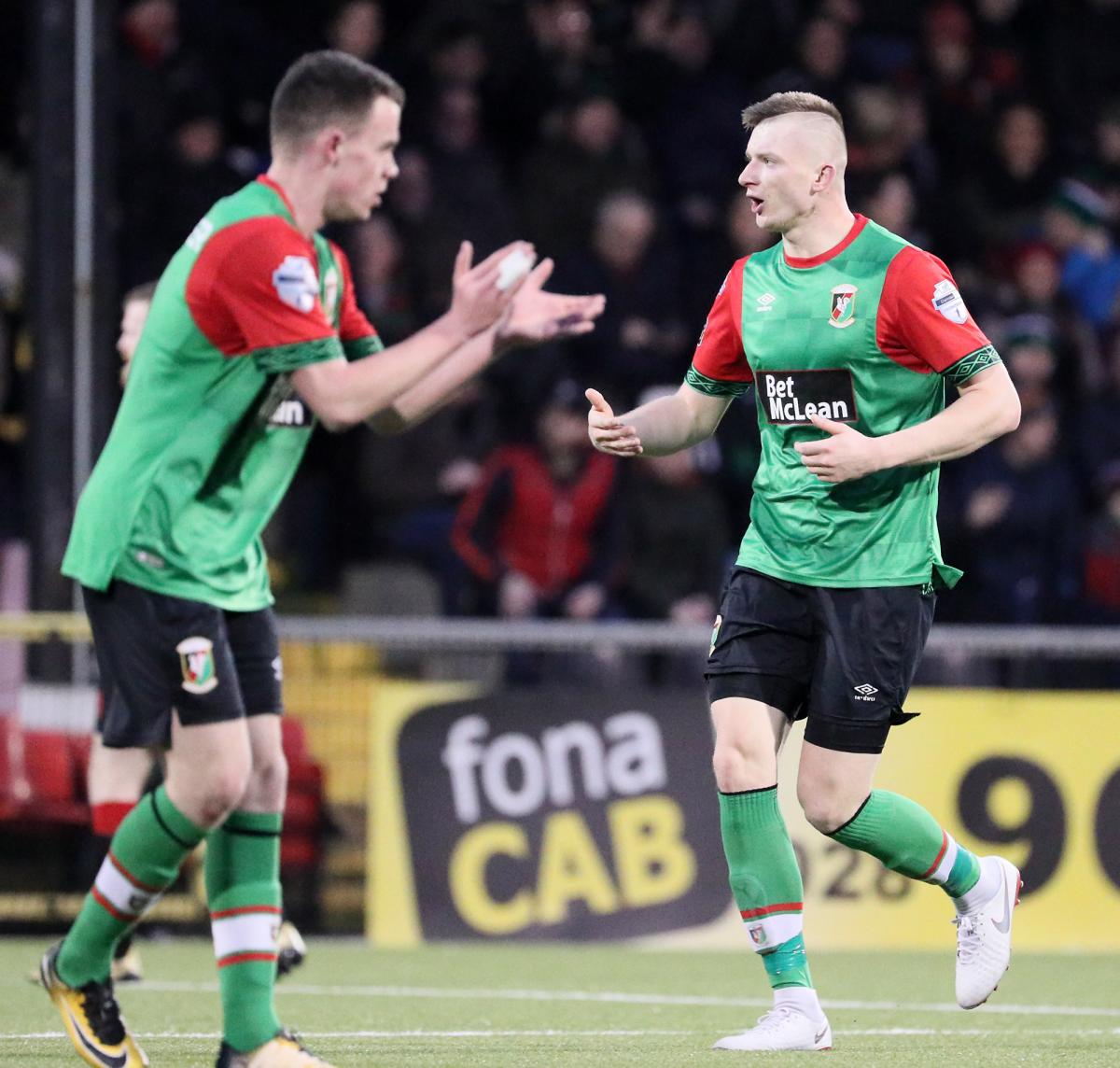 It stayed 1-1 for another thirteen minutes. Crusaders were gaining in momentum but the Glens – though understandably some of our new players or those who hadn’t played of late were tiring – were well in it and the match was very much up for grabs. However on 67 minutes Heatley – again unchallenged – latched onto a speculative lob into the box to comfortably slip the ball past Morris to put the Crues ahead.

This time there was no way back despite a very energetic contribution from Paul O’Neill who had replaced the tiring Darren Murray. Paul created a great chance for himself and brought a great save from keeper Doherty.  Crusaders made the game safe after 73 minutes from – again no surprise – a corner dropped into our six yard box where Owens was able to comfortably poke the ball home through a crowded area. 3-1. 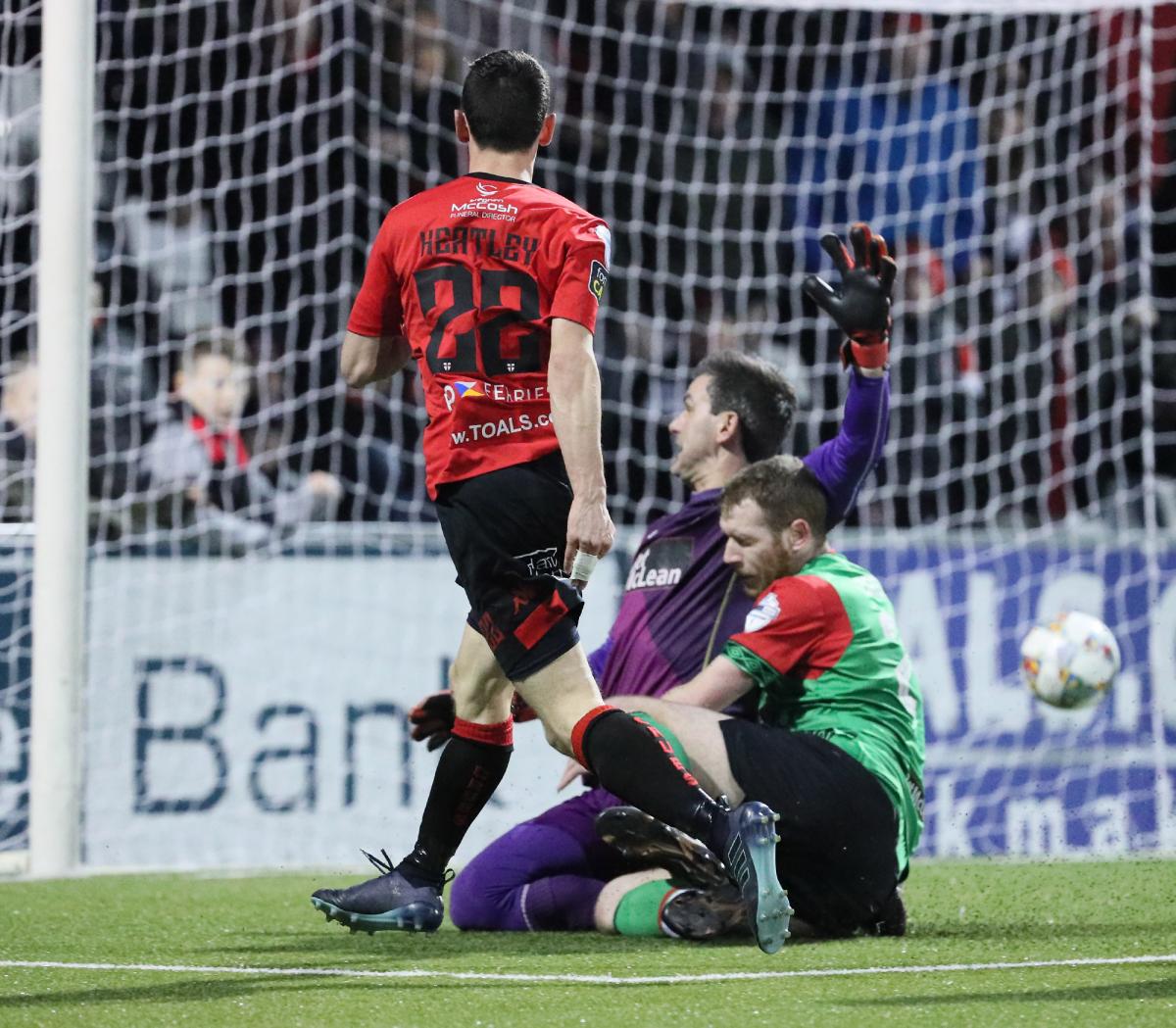 The scoreline at this stage looked more comfortable than it should but our day was compounded in the last minute when Nathan Kerr inexplicably played the ball from the wing back into our box into the path of the onrushing Matthew Snoddy who had no difficulty slotting the ball between Morris’ legs and into the Glens net.

This was definitely not a 4-1 match and there were some very good individual Glens performances – Gallagher, Pepper, Birney and Gwiazda on his debut in particular. But again the defence was susceptible to pace and indecisive when the ball was in our penalty area. No doubt Gary and Leeper will be using all their experience as defenders to work on this over the next few days and weeks. However there was a lot to encourage us and I’m sure Gary will be happy to welcome Marcus Kane and Robbie McDaid back for our return to the Brandywell next week.

Finally, it would be remiss not to warmly thank the fantastic Glentoran support that travelled today in great numbers and whose loud backing was evident from start to finish. With such support it’s only a matter of time before we put the travails of this season behind us and move back in the right direction.