After an uneventful first half at the Coleraine Showgrounds, a second half error of judgement by a Glentoran defender and a controversial third penalty decision by referee Keith Kennedy saw the Glens lose 2-0 at the hands of Rodney McAree's Coleraine. 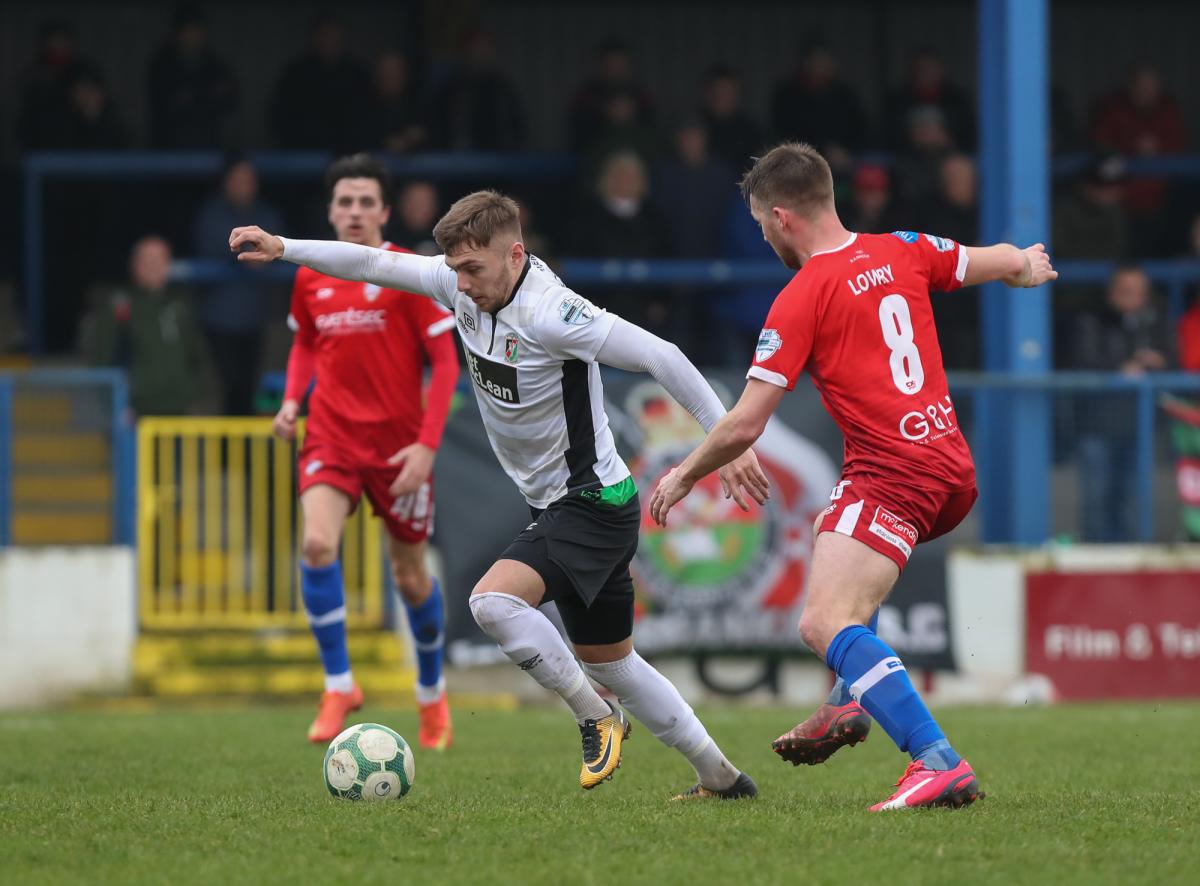 Unusually both teams were wearing their away kits when the match kicked off on a hard and bumpy pitch. Few chances were created in the first half with both midfields cancelling each other out.   An early chance seen the incoming Curtis Allen beat Gareth McConaghie, with his curling shot just going wide of the net. Next, Cricky Gallagher had a 25 yard power drive going straight into the hands of the Coleraine keeper.  In the 32rd minute, a Robbie McDaid through ball to Marcus Kane then saw his deep cross drift goal bound with Chris Johns tipping the ball over the bar. Moments later, the Coleraine keeper failed to hold a shot from John Herron, with Curtis Allen seeing his normal poacher like effort blocked by Chris Johns. 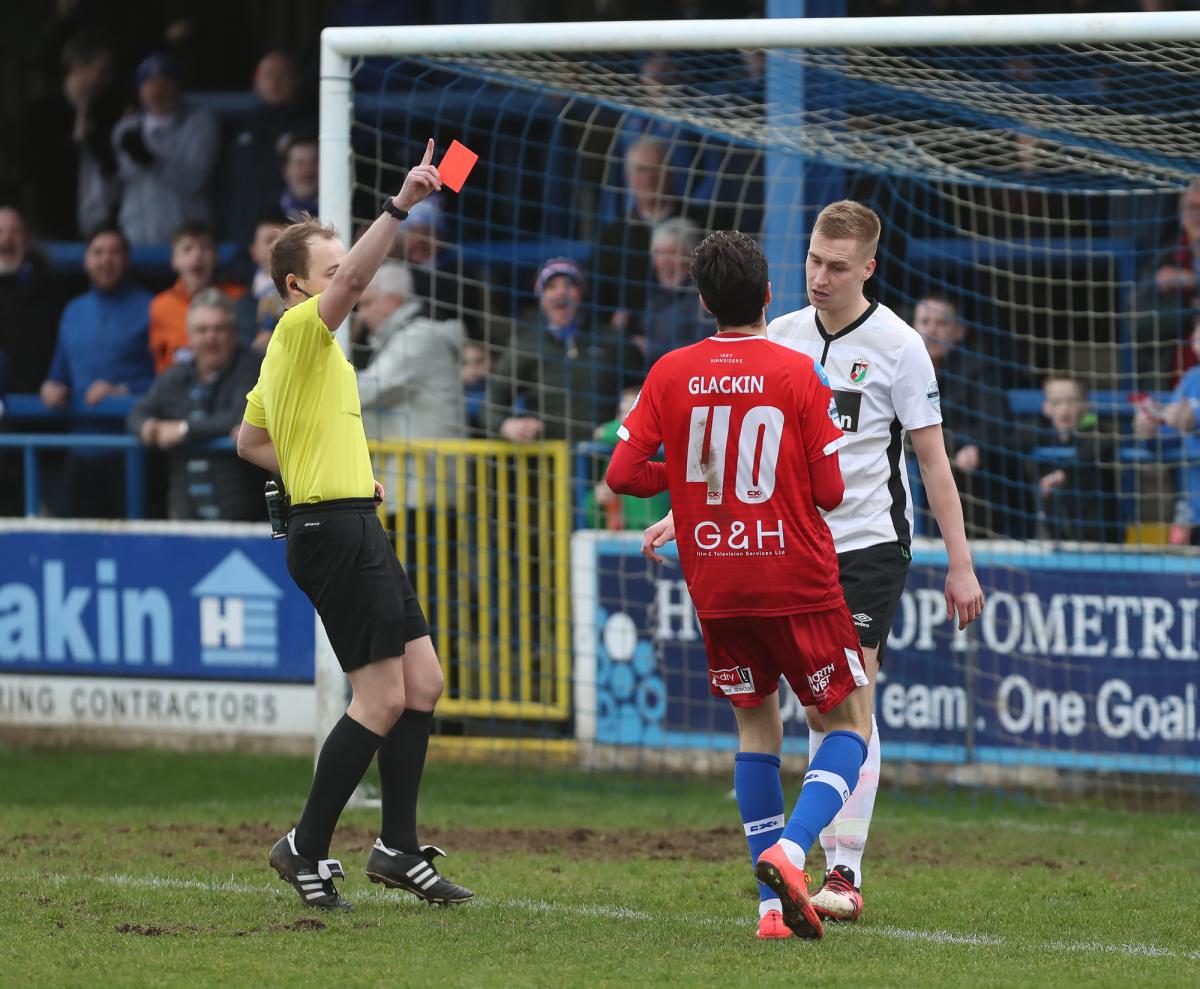 A hard work-man like performance from the Glens finished off an uneventful first half, with fans wondering if the second half would be similar.  These thoughts were quickly put to bed within three minutes of the restart. A long cross from Canning resulted in Glens keeper Dwayne Nelson parrying away the ball, which then fell to Dean Shiels in the penalty box.  His shot was then flicked on by Jamie McGonigle towards the empty Glens net, only for Calum Birney on the goal line to instinctively palm the goal bound ball away. The penalty spot was pointed to, and a straight red was shown to Birney with little protestation by the Glens for the defender who should had the experience to resist the temptation.  Jamie McGonigle's subsequent penalty was blasted up and over the Glens bar. There may at this stage have been the thought that ‘he took one for the team’ but we now had to play nearly a full half without a key defender and a change in format. 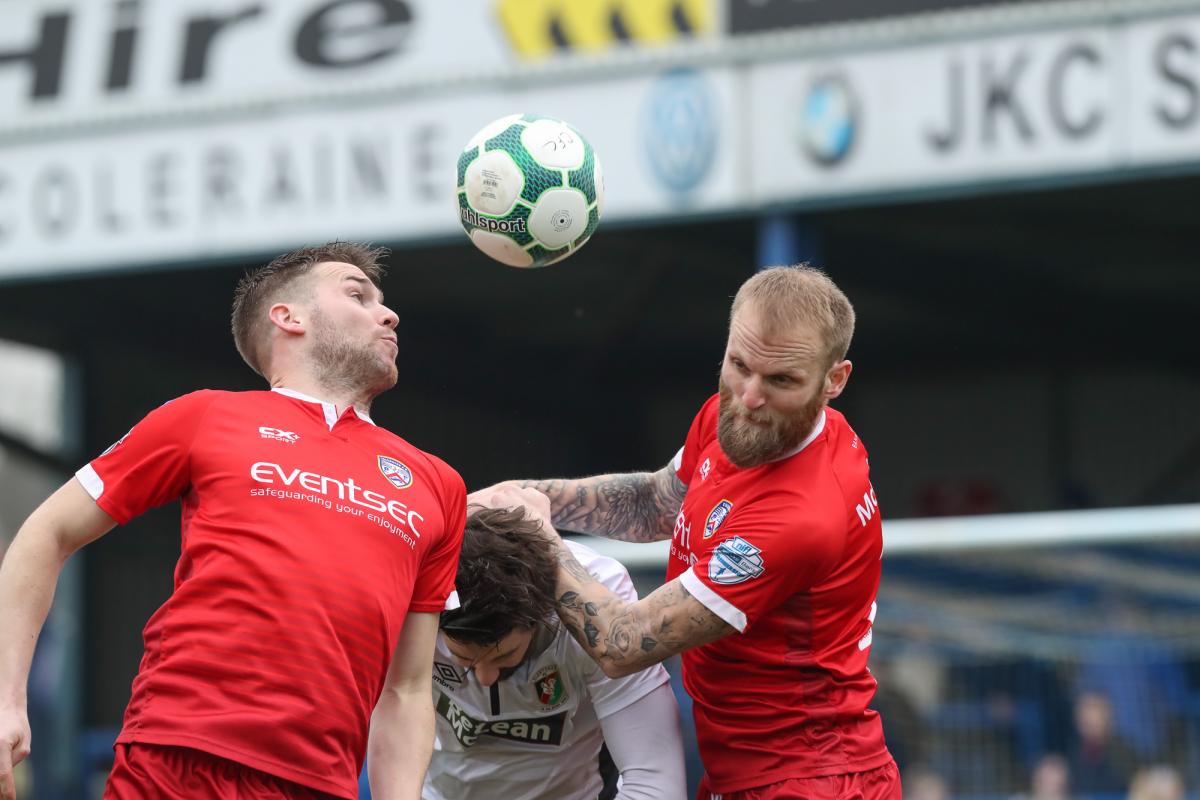 On the 58th minute, a second penalty was awarded after Dwayne Nelson was adjudged to have brought down Jamie Glackin.  It was a case of deja vu, with Dean Shiel's spot kick also going high over the bar. With two penalties missed, there was a sense of optimism that the ten men Glens would have a fighting chance of the game.  However, referee Keith Kennedy appeared to have other ideas. On the 63rd minute, following minor contact with Gavin Peers, substitute Eoin Bradley wasted no time in easily going down in the box for the referee to quickly award his third penalty of the match. Following a period of handbags in the box with Connor Pepper shown a yellow, Eoin Bradley blasted his penalty straight down the middle into the net, 1-0 Coleraine. 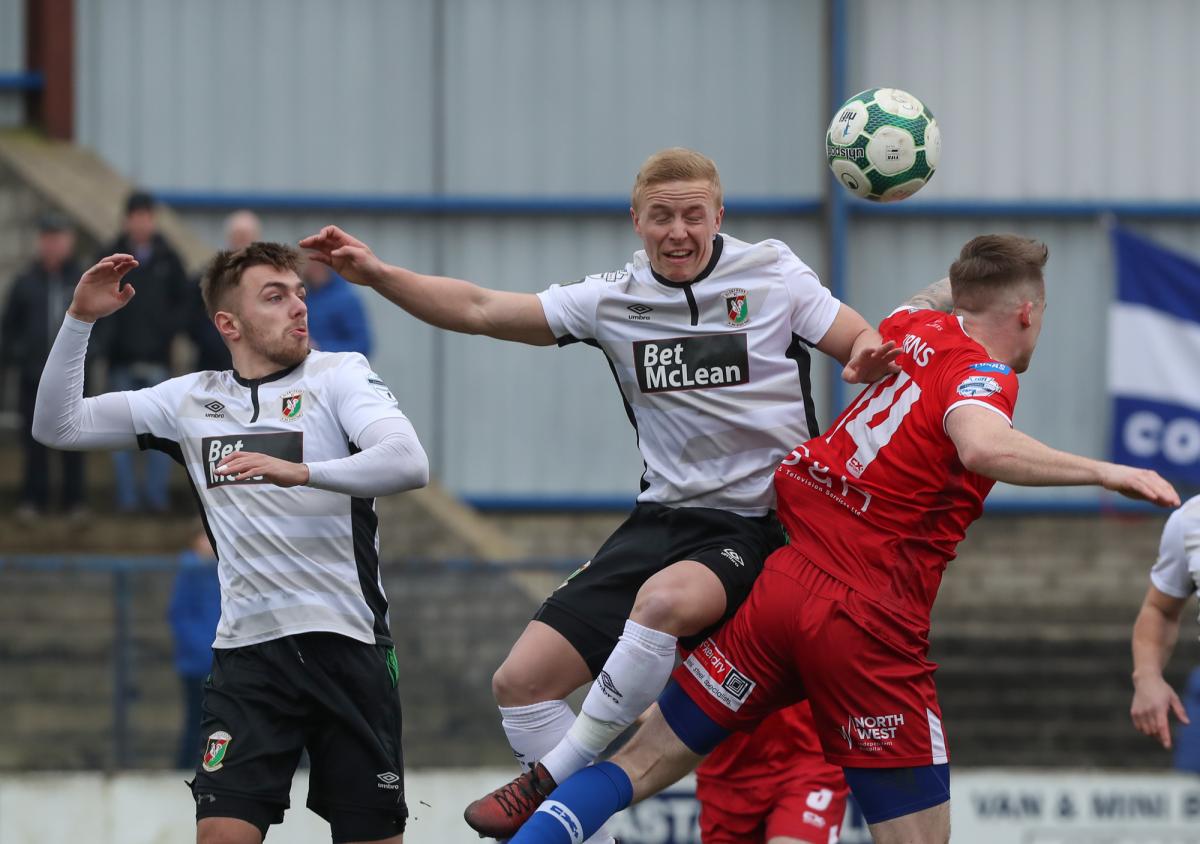 Less than ten minutes later, Marcus Kane was brought down in the Coleraine penalty area following a challenge by McConaghie with referee Kennedy showing no interest in the incident - possibly he had used up his quota of penalties for the day.

In the dying minutes of the game, a James McLaughlin shot following a Dean Shiels cross was saved on the line, only for the incoming Doherty to strike the ball into the net, 2-0. 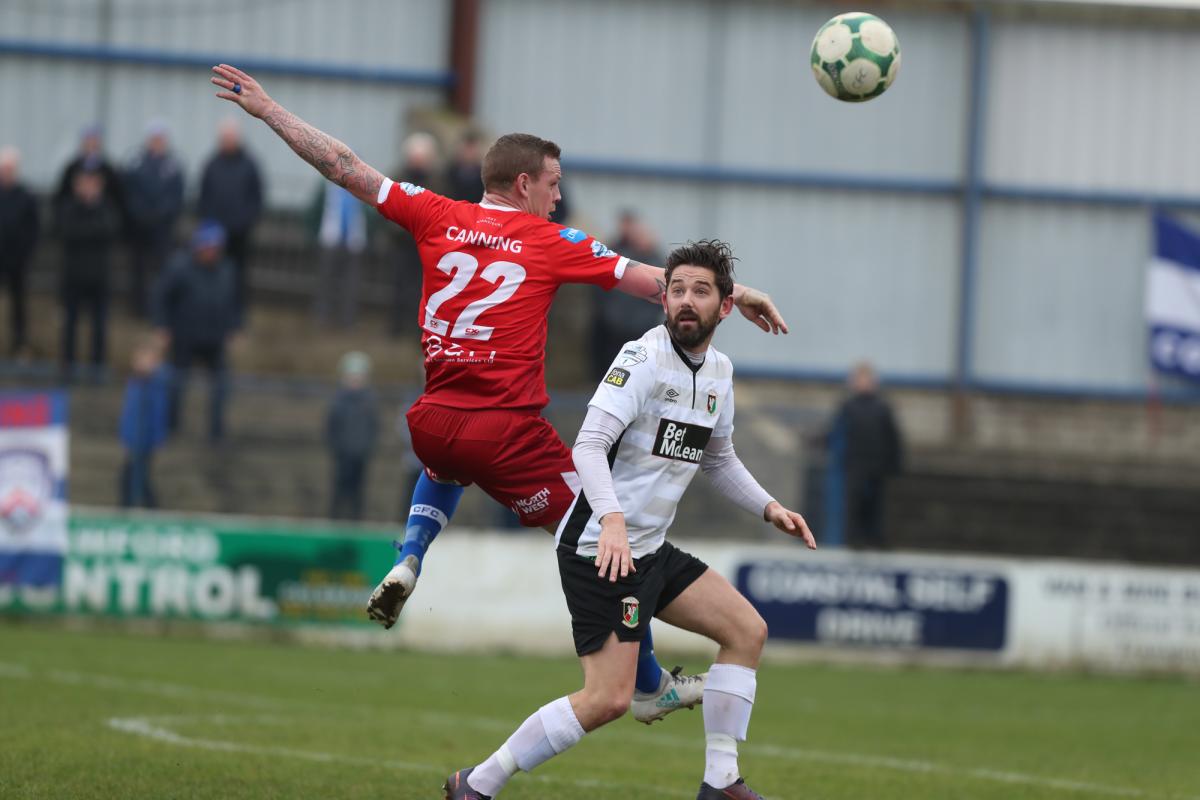 A day of disappointment for the Glens, the team battled hard but were undone by yet another player seeing red and 3 penalty decisions against. Next up we host Warrenpoint Town at the Oval on Tuesday evening. 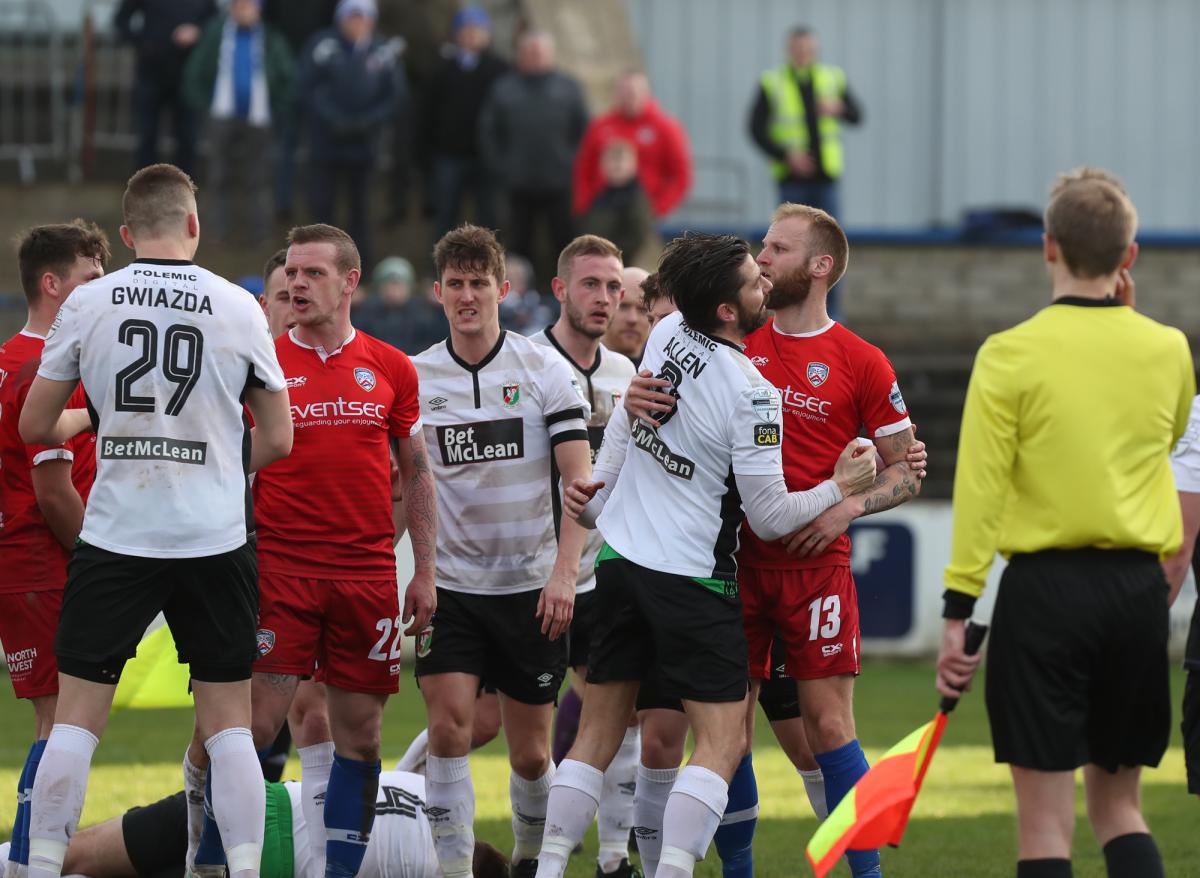