On the evening of the 4th May 1941 and in the early hours of the following morning, the lives of the people who make up the community which exists around the home of Glentoran Football Club, The Oval, the Harland and Wolff shipyard, and Short and Harland aircraft factory in the east of the city, were about to change forever.

At around 21.45 hours on the 4th May, 204 German bombers carrying 96,000 incendiary devices and 200 tonnes of high explosives, left their bases in Northern France...  their destination...  Belfast.

The city had already suffered heavily during the Easter raids, and on the next perfect bomber’s moon the Luftwaffe would return in an attempt to obliterate the industrial infrastructure so vitally important to the war effort.

Heinkel and Junkers bombers poured death and destruction onto the city in a frenzied attack that lasted for hours. East Belfast felt the full brunt of the Blitz that evening, with almost every street touched by the deathly spectre of a war many believed could never reach these shores.

The Oval football ground just off Mersey Street was almost completely destroyed. A tangled mess of smouldering metal and rubble, it gave way to the dark sinister tide of the Connswater River which burst its banks and flooded the playing surface.

It took an indomitable spirit, blood, sweat, tears and nine long years to rebuild both the east of the city and our football ground.

The blitz, its effect on the club and the community of east Belfast, has always played a significant part in the history of Glentoran FC. The story of the destruction and subsequent long road back to peace and normality in the years after the war has been handed down from generation to generation.

On Wednesday 4th May 2016, exactly 75 years to the very night the Oval and the city was bombed, the Glentoran Community Trust, in association with Spar and Glentoran Football Club, would like to invite you to join us at the Oval in an evening of dignified reflection and commemoration. 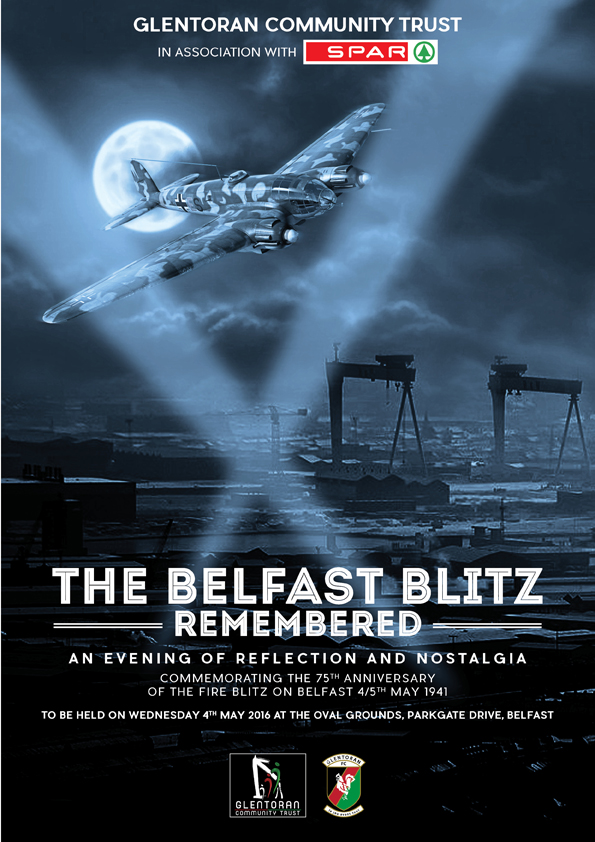 The evening begins when you are invited to join us along the route to cheer on the lads of the 7th Gloucestershire Regiment. Members of a number of Glentoran Supporters Clubs, in the uniform of the home guard, will parade at 6.45pm from St Patrick’s Church of Ireland on the Newtownards Road, down Dee Street, along Mersey street, and into The Oval itself. Led by the Pipes and Drums of the Royal Irish Regiment, the soldiers will then take their place back on duty at the pill box which sits atop the hill on the Sydenham End, 75 years to the night that they last watched as the bombs fell all around them.

This totally FREE event, with the doors of the stadium open as the parade arrives at 7pm, will welcome every element of the community that surrounds the stadium and the city itself.

Inside the stadium, working with the Ulster Aviation Society, we will have on display Walter McManus’s Spitfire, a full size replica of a Spitfire Fighter purchased by the citizens of Belfast as part of the Belfast Telegraph Spitfire Fund.

We will also have on display in association with Lisburn & Castlereagh City Council, a 1938 Dennis Light Four Fire Engine, one of the very machines which incredibly attended the hundreds of fires that raged across Belfast city on the 4th May 1941. Yet another remarkable artefact, and one which we as Glentoran Community Trust have been helping to restore in order to have it on display.

At this stage the Trust also hopes to have as part of the event, the only working anti-aircraft searchlight in Ireland, along with both an anti-aircraft gun and Bofors gun.

A full list of the display and associated elements will be announced in due course.

After a set played by the Pipes and Drums of the Royal Irish Regiment on the concourse of the stadium, we will invite you to join us in the main stand at the ground. The grandstand provides magnificent views over the Belfast skyline, incorporating Divis mountain, Napoleon's Nose, the shipyard, the George Best airport, Sampson, Goliath, the spire at St Anne's Cathedral, St Patrick’s and St Matthew’s churches, and the Obel tower amongst others.

On a specially constructed stage on the pitch, proceedings will open with a medley of hits from the forties played by the Indigo Big Band along with the Swing Gals.

As sunset approaches we will then tell the story of the Belfast Blitz by way of a 15-minute audio narration by Amanda Burton (courtesy of Hardy Films) played across the night sky. As the story comes to its conclusion it is our intention to re-create an audio soundscape experience, similar to the sounds that those who were in the city on the night of the fire blitz would have witnessed. The noise of the air raid sirens, the low drone of distant bombers, escalating to a crescendo of noise as 96,000 incendiary devices fell on the city. The clanging of fire bells, the shouts of air raid wardens, the returning fire of the anti-aircraft guns on Lisnabreeny Hill, and the blast of the bombs as they hit their targets ...    before the all clear siren sounds...

We perceive this to be a time of reflection for all those who were there that night, those who lost loved ones, and for the generations who came after, who may have no perception whatsoever of just how horrific that awful night must have been.

As darkness falls our club chaplain David Thompson will host a small service of remembrance, incorporating a minute’s silence, before we call upon members of the emergency services and representatives of the army who were stationed in the pill box on May 4th 1941 to lay wreaths on the Oval pitch.

We are also in the process of inviting the fire service from Drogheda to the event, mindful of their assistance with the rescue of many Belfast citizens during the Blitz, alongside the invitation of our own emergency services, and representatives of the Polish community in acknowledgement of the deaths of 12 Polish servicemen who died during the bombing in Ravenscroft Avenue.

On the closing of the service, Sammy Napier (played by the wonderful Jim Kitchen) makes a return 35 years on from his famous exploits in Vienna, where he helped the Glens lift the Vienna Cup. Sammy, now 59 and a night watchman at the Oval, tells the tale “For its back to the Oval we go”, before members of the Glentoran Academy re-enact the famous walk onto the pitch by Glentoran’s Tommy Hughes and Linfield’s Isaac McDowell in the first ever game after the war.

The final element of the night is a return to the stage for the Indigo Big Band and the Swing Gals, where songs of the era will be played live, after the" All Clear" as a signal of new life, rejuvenation and of a club and a community rising phoenix like from the flames. 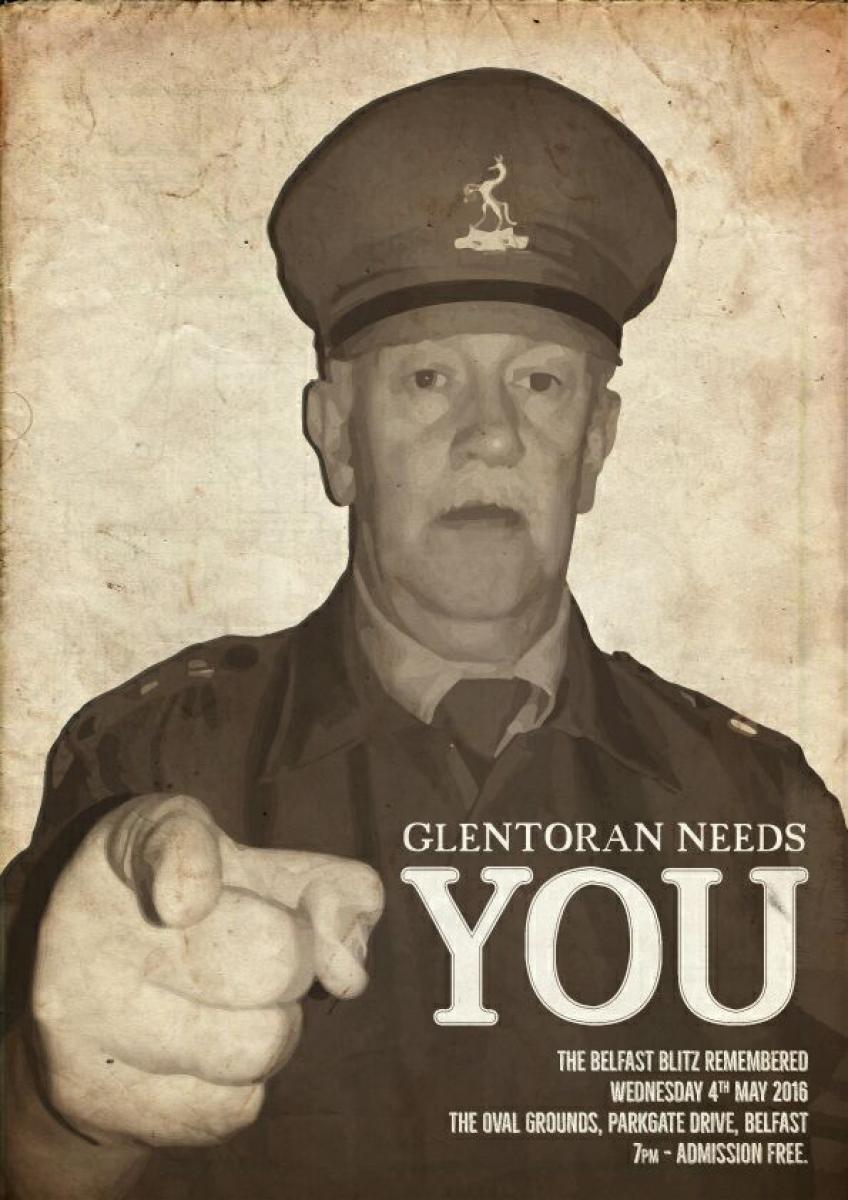 Further details on the evening and updates will appear on all connected social media outlets in the run up to the event.

We sincerely hope we will see you there!

The board of the Glentoran Community Trust.