Glentoran, majestic in the first half, conceded 4 second half goals in the second at the Ballymena Showgrounds this afternoon. It was, as the old football cliche goes, a game of two halves and Ballymena United ended up deserved winners; their first league victory over the Glens at the Showgrounds for almost a decade!

In horrendous weather conditions it was the home side that created the first opportunity with just 2 minutes on the clock; Willie Faulkener dragging his shot across Elliott Morris' goal and wide of the far post. James Ferrin, who alongside Jonny Addis at the centre of the Glentoran defence had a superb first half, had the first opportunity for the visitors but his header from Chris Lavery's corner was straight at Alan Blayney in United's goal. On 8 minutes Ross Redman fed Curtis Allen in the area but Blayney was quickly off his line to block. Jonny Smith's ball over the top seemed to have put Chris Lavery in on goal but referee Taylor blew for an infringement to the surprise of most in the crowd! 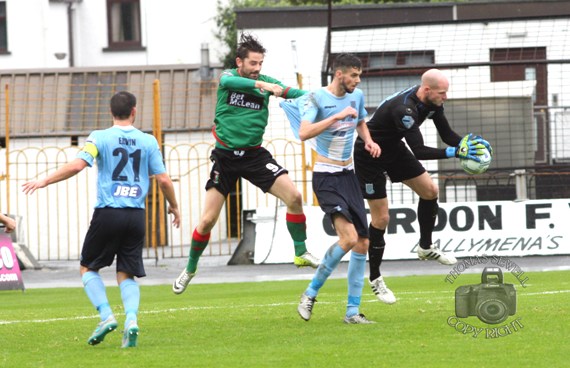 The Glens were flying at this stage. Eric Foley's 30 yard free kick was turned behind by Blayney and then Addis shot wide from the resulting corner. On the quarter hour mark Foley found Allen in the box but instead of shooting the Glens number 9 attempted to find Lavery and the Sky Blues cleared again. A minute later though the Glens took a deserved lead. Aaron Harmon won the ball in midfield and found Foley. His neat pass put Allen clear and the striker duly dispatched the ball past Blayney for his 50th Glentoran goal.

Dominant Glentoran kept on the front foot and Gordon (twice), Lavery and Allen all spurned chances to double the advantage. On 31 minutes skipper, Foley almost created a second for Allen but his delightful cross was cut out by Blayney with Allen about to nod home. Two minutes later Redman conceded a free kick just outside the left corner of the 18-yard box. Tony Kane swung the ball in and James Ferrin did well to clear the danger. Jonathan Smith then set up Lavery but Jim Ervin's intervention took the pace of the shot and Blayney was able to make the save comfortably. 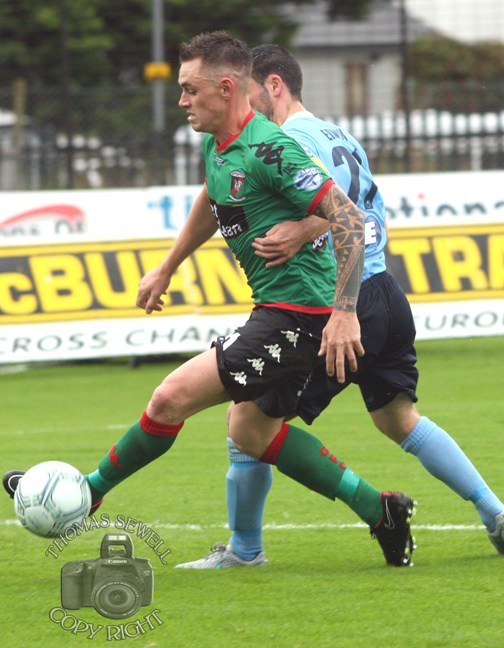 One nil at the break but the feeling amongst the 400+ travelling Glentoran fans was that the game should have already been put to bed. As expected, Ballymena Utd came out fighting and upped the tempo of the game. The first goal of the second period would be crucial and it was the home side who got it just 6 minutes in. Steven Gordon lost possion in the middle of the park and the ball was played out right to Ervin. He went past Redman too easily and his cross to the back post should have been headed home by Faulkener. His effort came back off the far post but Elliott Morris was slow to react and Sky Blues' skipper, Allan Jenkins blasted home from a couple of yards out. A free kick from Eric Foley 5 minutes later almost led to the Glens regaining the lead but Ferrin's effort was straight at Blayney and although the keeper couldn't hold it there was no Glentoran player following up.

An underhit clearance from Jonny Addis on 60 minutes led to Ballymena's second goal. The ball was collected midway inside the Glentoran half on the left touchline. Thompson found Friel and he had too much time and space to cross to the back post where Willie Faulkener headed home. Foley and McAuley both had long range efforts but both failed to trouble Blayney. On 73 minutes Curtis Allen played Chris Lavery in but his shot from a tight angle was well kept out by the United keeper, Blayney. 8 minutes from time the home side settled the game with a third from the penalty spot. From a Glentoran throw in near the corner flag, the ball was cleared to the edge of the area. Aaron Harmon totally misjudged the bounce and United broke clear. It was a 3 v 1 situation with only young Tiarnan McAuley covering for the Glens and Harmon tried desperately to join him. Cathair Friel carried the ball to the edge of the area and his shot struck the far post. As Thompson tried to follow up he was brought down by Harmon and the referee pointed to the spot. 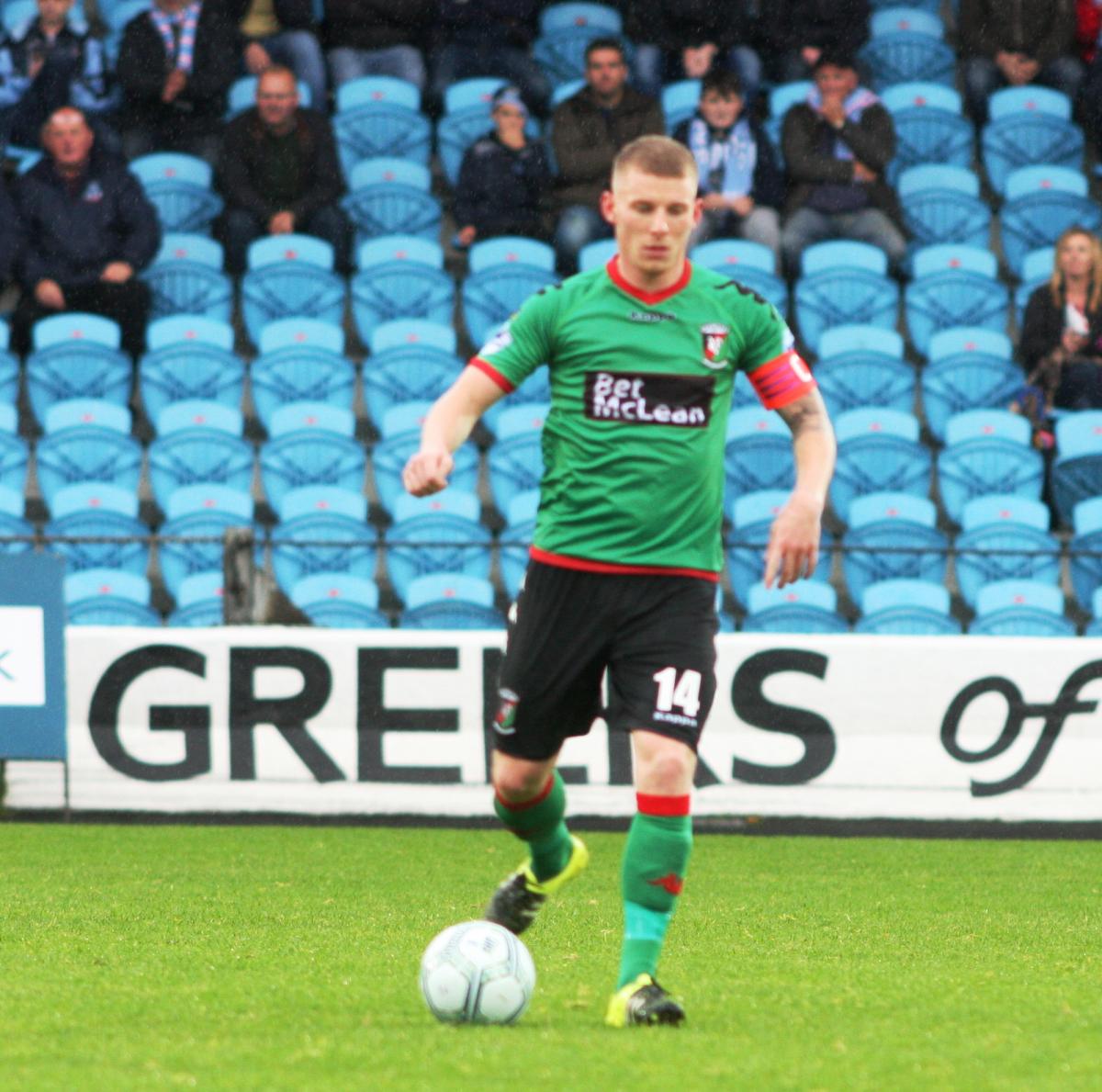 Tony Kane took the spot kick and beat Morris to make it 3-1. 5 minutes later substitute, Marcus Kane was adjudged to have handled the ball in the area and the linesman signalled for a penalty. Again Tony Kane stepped up and again he beat Morris. 4-1 to the home side and it was game over!

So what went wrong? Glentoran totally dominated the first half but had only one goal to show for their efforts. When the home side upped the pace too many players were found wanting and as the goals went in the confidence vanished. Are some not good enough? Are some not tough enough? Are some not up for the fight? Certainly whoever takes over the managerial role in the coming week has to turn this around and quickly. He can't do it on his own though. The players need to step up to the mark in all areas of the field. It's Linfield at the Oval next. A second half showing like today's will not be acceptable.

Committment and effort is all the Glentoran support has ever asked for. Next week we demand it! 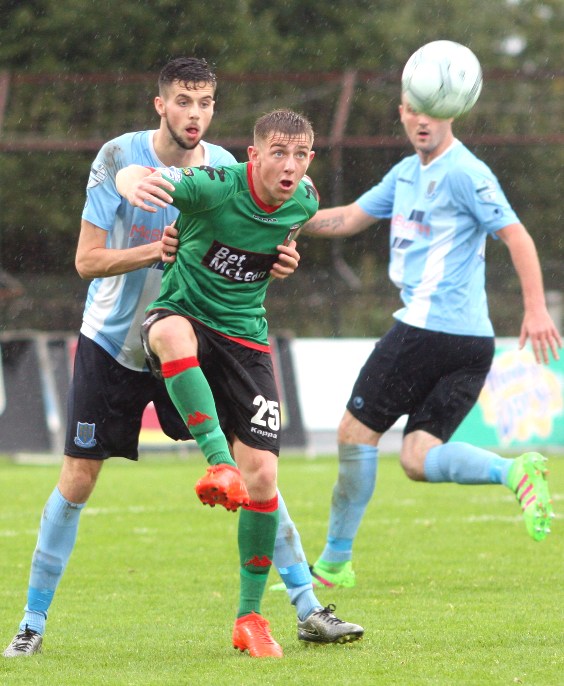